Dometic’s PLB 40 is a truly plug and play portable battery solution that allows anyone to have a dual battery system in any vehicle.  That’s right – no custom wiring or additional purchases required.  As long as you have a 12V outlet in your rig that can supply 100W, you can plug in the PLB 40 and enjoy an additional 40 Amp-Hours of power that can be used to power whatever you want.  This means that you can power 12 V cigarette-style devices like an electric cooler, your USB devices, and two-pin 12V appliances without pulling from your vehicle’s starting battery.

Dometic certainly isn’t the first company to make a portable battery, but the ease of use and a few electric cooler-specific optimizations to the PLB 40 make it a great choice for folks who want to be able to use their electric coolers in just about any vehicle, or have a versatile supply of power in anywhere they may need it. 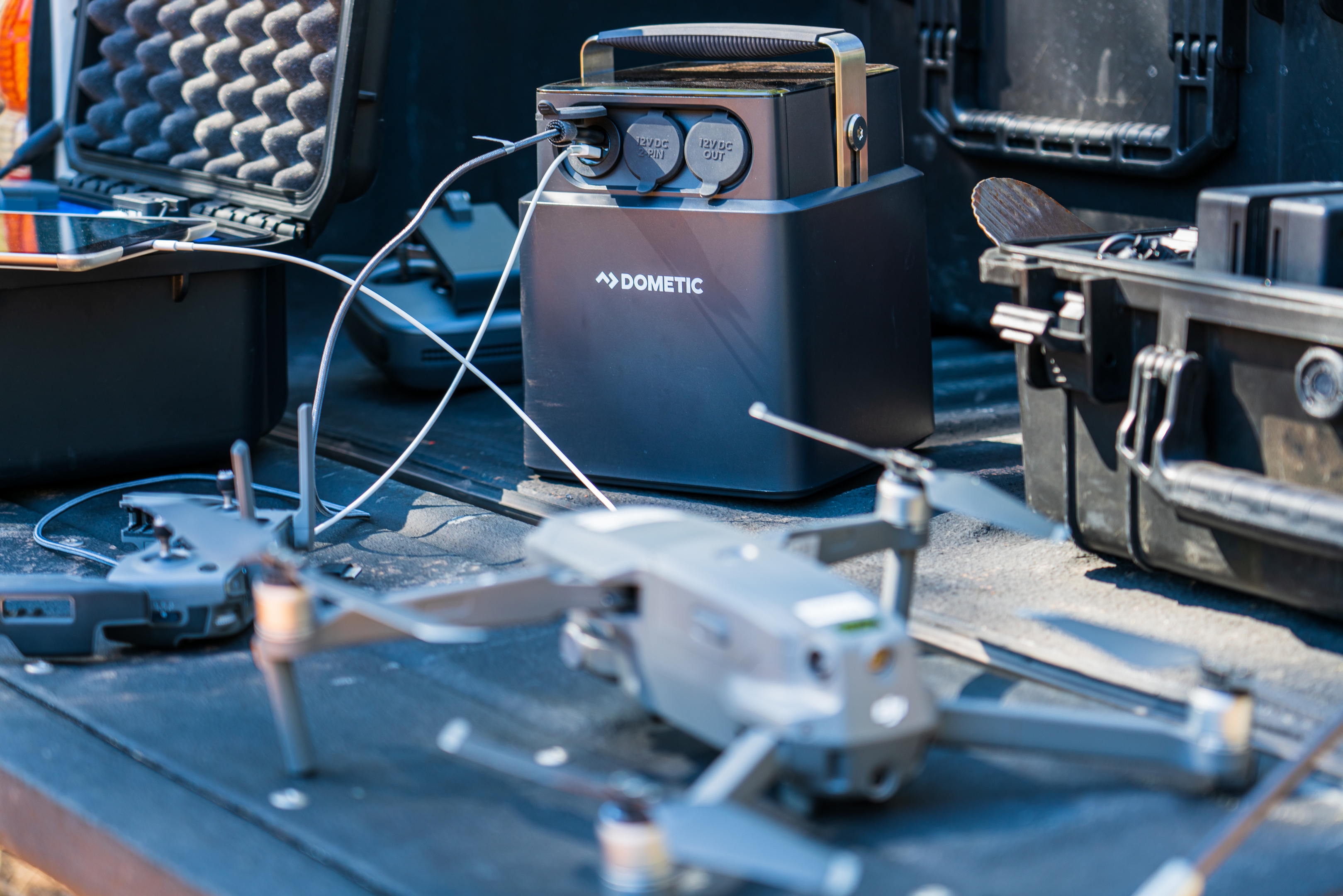 The number one reason I hear from folks against getting an electric cooler is that they don’t want to have to deal with wiring in a second battery or a adding a dedicated circuit for their electric cooler.  While a second battery certainly isn’t required to run an electric cooler in a vehicle, having a constant supply of power is.  Since most vehicles have all of their 12V circuits switched by the ignition (for obvious reasons), adding a non-switched circuit has been the minimum effort required to keep an electric cooler powered up when your vehicle is not running.  A switched circuit, a quality battery, and utilizing the low voltage cutoff on your electric cooler will work, but you’re still limited in how long you can stay out by the capacity of your starting battery.  Yet, by adding a PLB 40 to your system, you don’t have to touch your vehicle’s wiring, and you’re able to add a considerable power reserve. 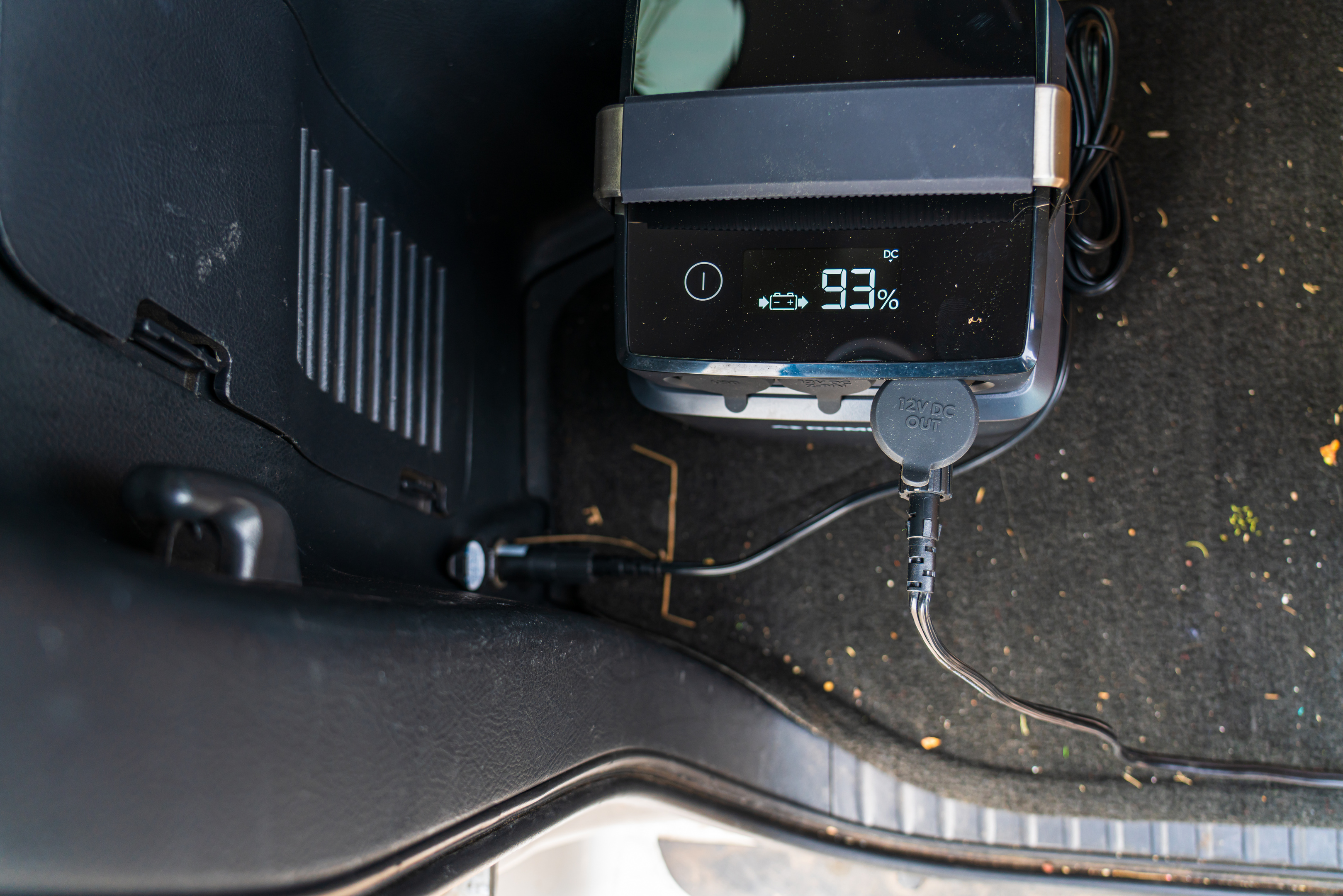 It’s really that simple.  While the vehicle is on, the PLB 40 charges up, and once the vehicle is parked, the PLB 40 becomes the power supply for your cooler and anything else you want to plug in while in camp, leaving your starting battery topped off.  The PLB 40 means that you can run an electric cooler in any vehicle that has a 12V outlet, so whether you’re traveling in your buddy’s rig, or even a rental car, the PLB 40 lets you bring all of the benefits of an electric cooler into any car with a 12 V outlet.

Wanna use your fridge in the wife’s car for a grocery run on a hot day? Add a PLB 40 and you’re all set. 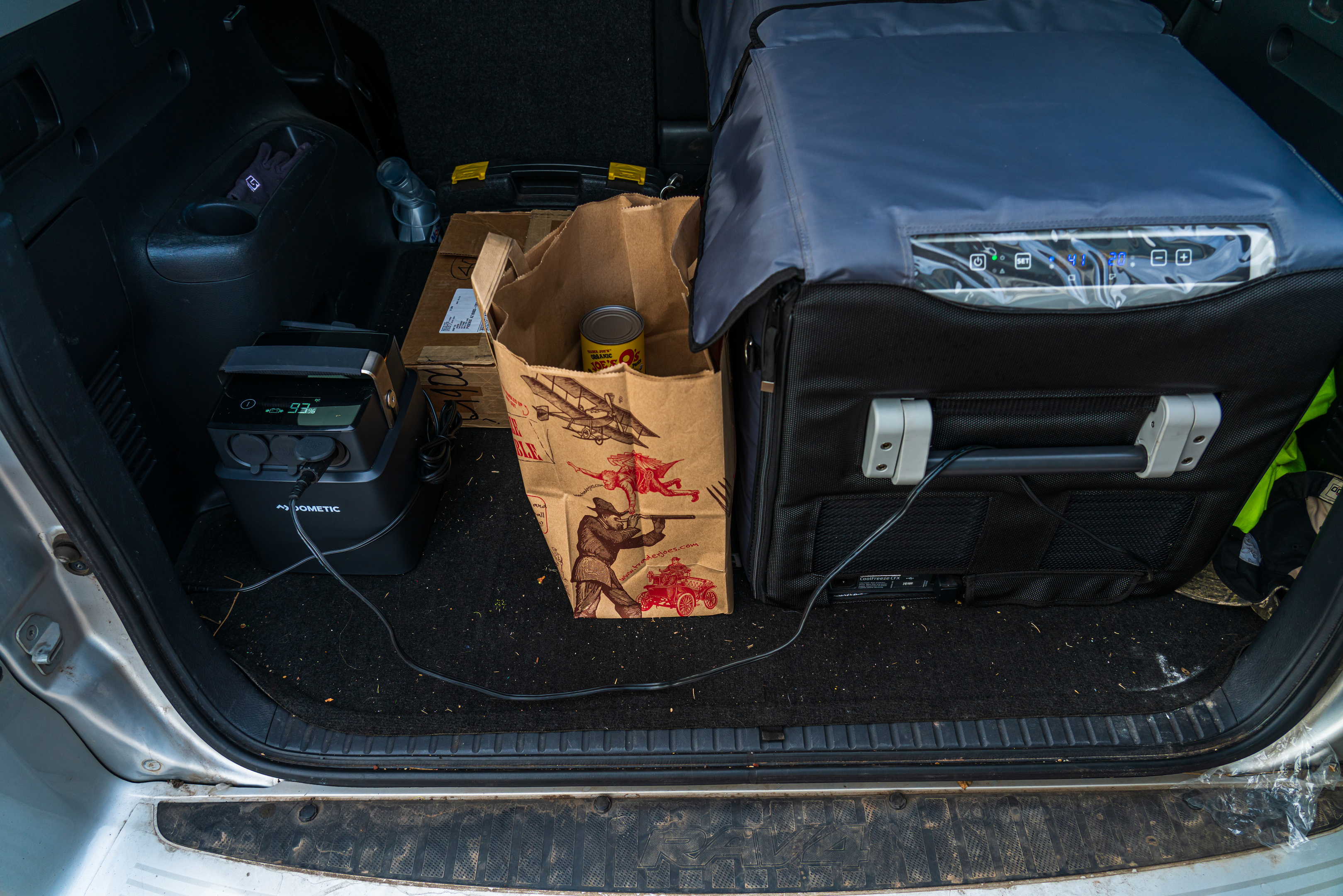 If you’re wondering how long 40 Amp Hours lasts, the answer is – it depends.  The size of your electric cooler, how efficient it is, how hot the environment is, and how much you’re getting into your cooler, and what you’re putting into your cooler are all things that will impact the runtime you’ll see from the PLB 40.  Dometic advertises 40 hours of runtime when powering a CFX 40 electric cooler for a baseline reference.  I’ve been running my PLB 40 with my CFX 75 DZW and as you would expect that with nearly twice the volume of the CFX 40, my runtimes are considerably shorter.  I’m also typically running one compartment as a freezer, which requires even more power than a refrigerator temperature setting.

All that being said, PLB 40 is able to keep my Dometic CFX 75 powered up without being replenished for at least 24 hours.  If you know the average draw of whatever you want to power, doing the Amp-Hour math is pretty easy, just divide 40 Ah by your total draw.  If I’m going to be in the same place for longer, I’ll plug in a solar panel to the back of the PLB 40 using the Anderson SB 50 port, or I’ll plug the PLB 40 into an always energized 12v outlet in one of my trucks.  The PLB 40 also accepts AC charging, so if your destination for the night is a hotel or someplace with grid power, you can charge the battery from a 120V source so it’s ready to go in the morning. 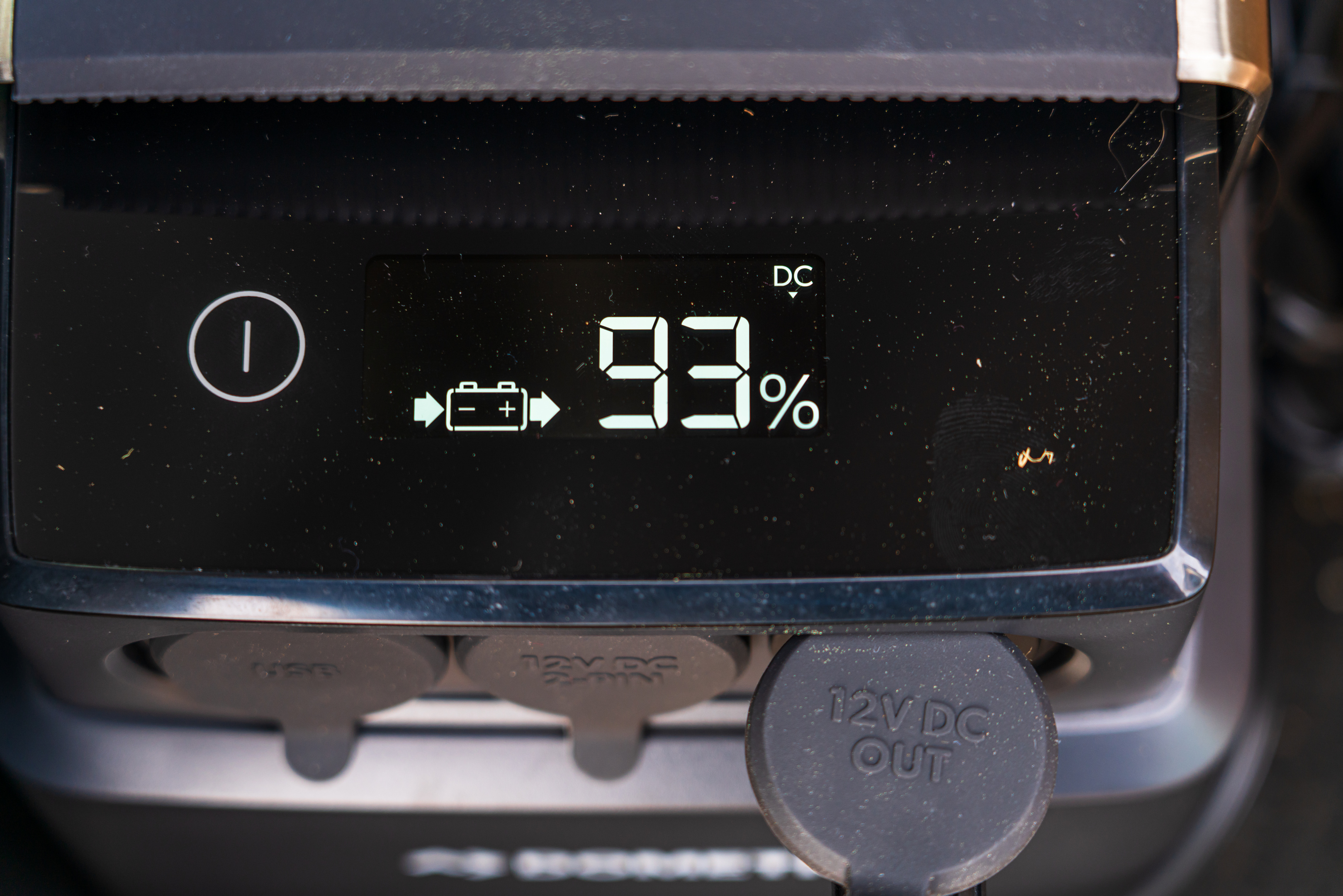 The charge controller on the PLB 40 will continue to accept DC input all the way down to 8 VDC, so if you have your PLB 40 drawing from your rig’s starting battery through an always-energized circuit, make sure that you’re keeping an eye on your starting battery’s voltage.  Depending on how large your vehicle’s starting battery is, pulling 30 + Ah from it could make quite a dent in your starting battery, and it’s ability to crank your rig over.   Having a jump start battery with you is also always a good call.  Dometic has this 8 VDC cutoff in place to allow for solar charging the Lithium Iron Phosphate Battery in the PLB 40.  This LiFePO4 battery has a couple of advantages over other types of Lithium batteries found in other portable batteries, namely an increased lifespan and the chemistry is more stable (safe) than other lithium designs.  Being powered by a lithium battery also means that the PLB 40 is lightweight, and very portable. 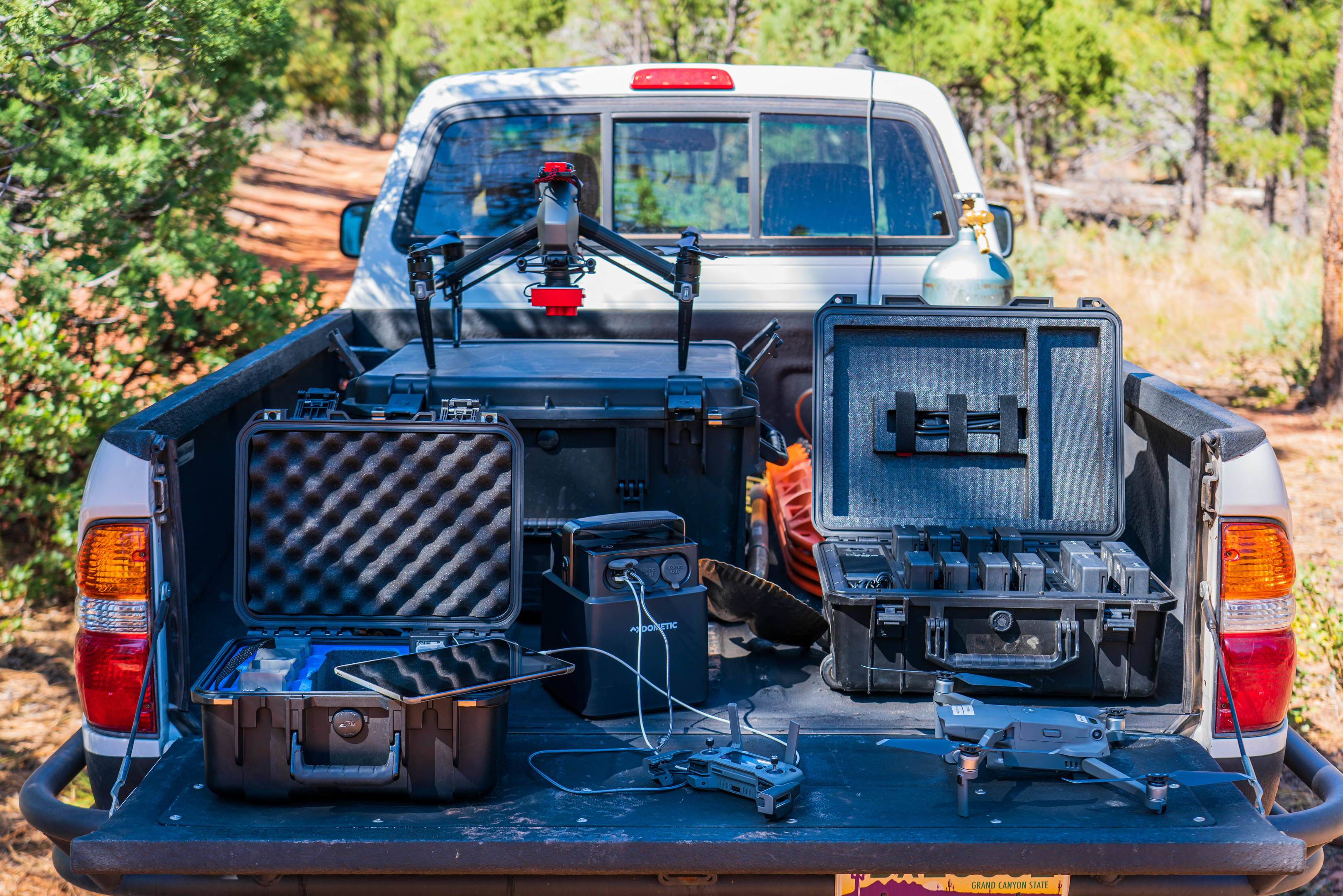 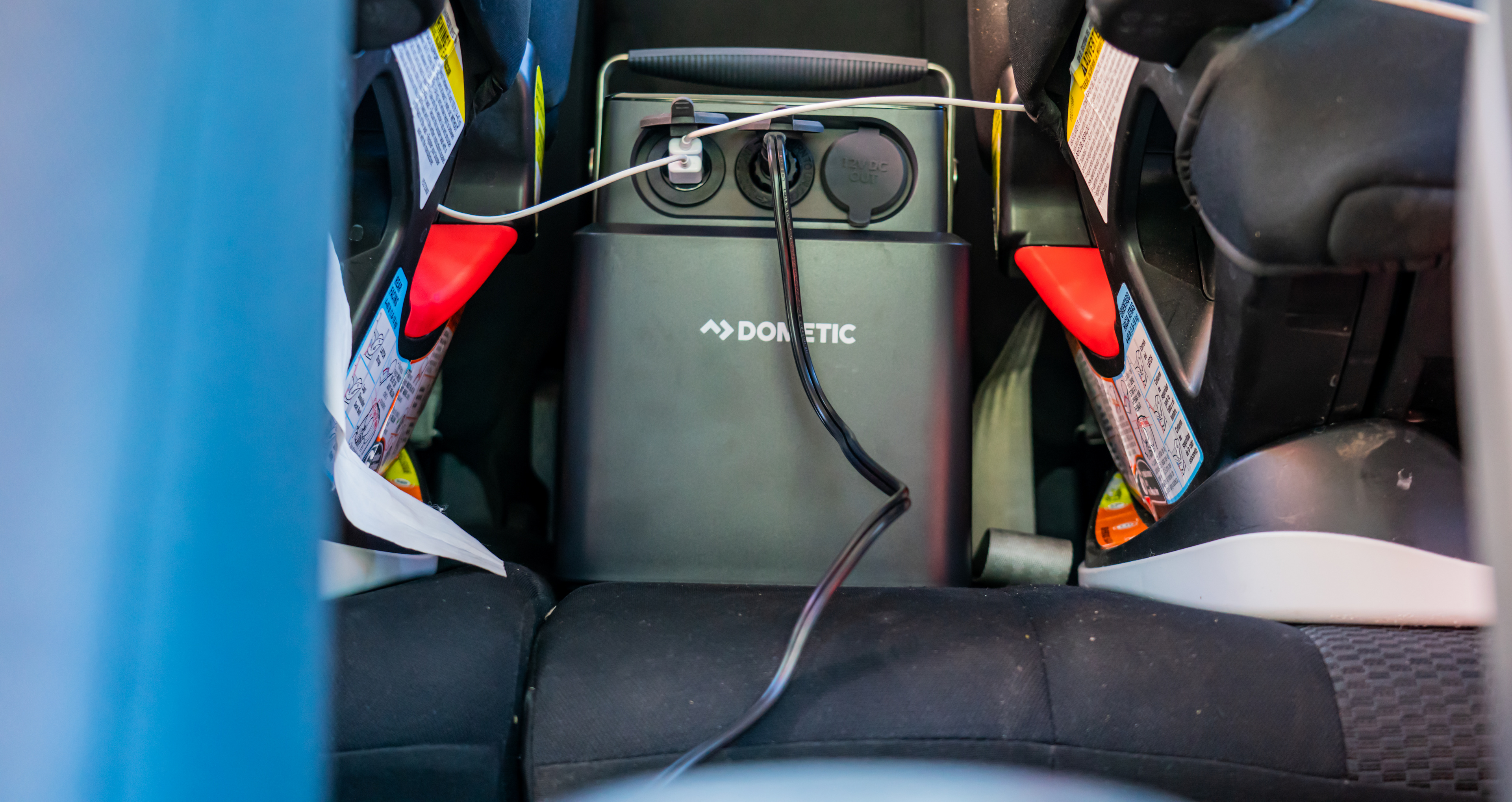 The PLB 40 is so easy to move around thanks to its beefy top handle, that you’ll find yourself using it all the time, and you’ll never have to convince yourself to go lug your battery around.   Tipping the scales to just past 16 pounds, the PLB can easily be moved anywhere it’s needed by almost anyone.  Not only it is lightweight, but it has a small footprint that’s less than eight inches on a side, so it can be stashed in all kinds of places where power is needed.

This size and weight opens doors for how this thing can be used.  No power outlets in reach of the kid’s seats in the family hauler?  Stick the PLB with the kids, and let them run their devices for the entire duration of your drive (if that’s your thing).  Need power someplace in camp that’s not your rig?  Grab your PLB.  If you’ve been lugging around other battery battery boxes where you supply a car battery – you need to experience the PLB’s size and portability. It’s a game changer. 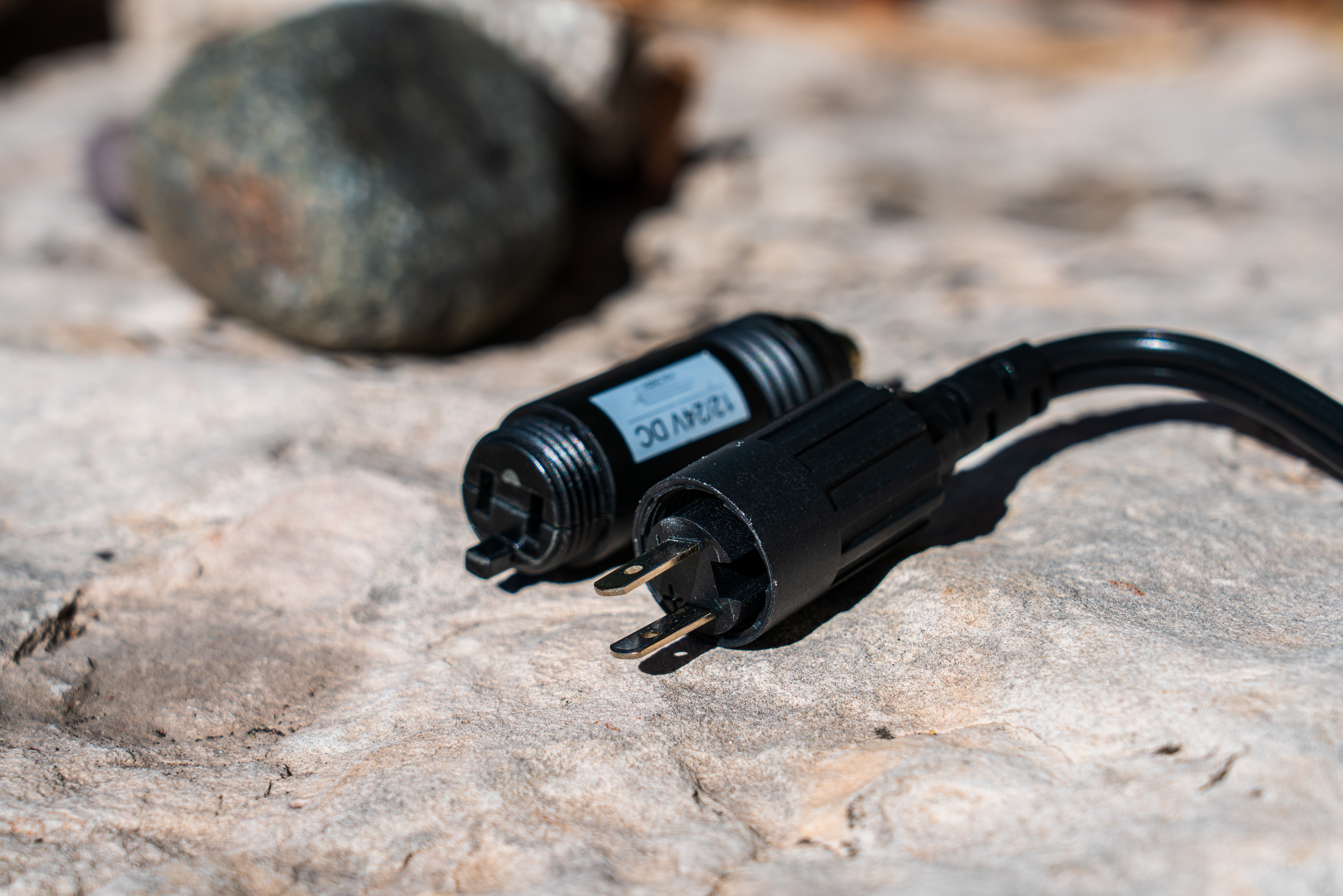 That ease of use however, does come with a price tag and the PLB 40 isn’t cheap.  Googling the PLB at the time of this writing turns up prices from $765 USD, and up.  With that money, you’re in striking distance of other solutions out there, so just make sure that you’re getting the product solution that best meets your needs.

Speaking of value, it would be awesome to see Dometic offer a version of the PLB 40 that had two 12 V cigarette-style ports instead of one 12 V cigarette and one 12 V two-pin.  Or at least a two-pin to cigarette-style dongle with the current PLB 40.  If you’ve ever unscrewed the 12 V plug from your Dometic electric cooler, you’ve no doubt discovered the two-pin connector hidden inside, but I have far more 12 V cigarette style devices than two-pin devices, so it would be nice to have the added flexibility of 2 cigarette-style ports.  The one redeeming part of the 2-pin connectors is that they screw in, so you don’t have to worry about accidentally knocking your plug out.  Depending on how you pack your rig however, this may be a clutch feature or it may not make that much difference for you.  A screw in connection definitely adds piece of mind, but I have yet to knock out a 12 V cigarette style plug – and I’m probably jinxing myself by saying that.

Yet, for a plug and play, as easy as it gets, “I just want the thing to work”, you can’t go wrong with the PLB 40.  Other solutions are going to require purchasing other chargers, adjusting cut-offs, or taking other steps to get the function that the PLB 40 comes with out of the box – and it’s just so nice to just be able to plug two things in and go. 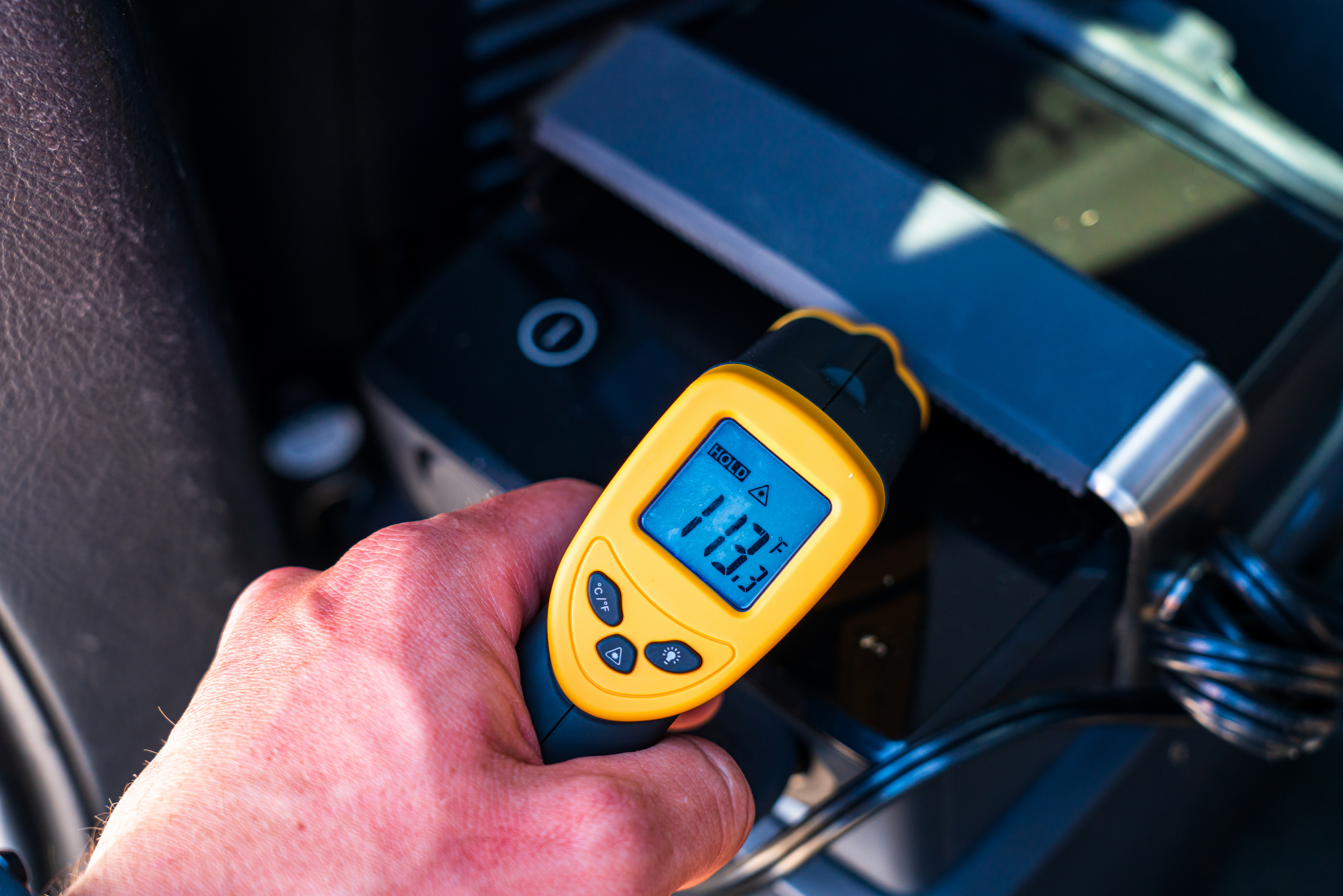 Dometic’s PLB 40 is a pretty awesome piece of technology.  Based on conversations I’ve had with other folks who’ve shelled out for one, it’s been exactly the thing that they were looking for to be able to get into the electric fridge game, and they couldn’t be happier.  It doesn’t have all of the outputs that other portable batteries have, but it’s true plug and play functionality, portability, and reliable performance make it any easy choice for folks who don’t want to touch their vehicle wiring to be able to run an electric cooler.

The PLB 40 hasn’t missed a beat in my use, which has included multiple trips to Phoenix in the middle of summer.  Even when the unit was well heat-soaked with a surface temperature that meant the unit would start to experience diminished performance, the PLB 40 didn’t slow down or indicate on it’s display that it was getting too hot.  It’s small size and weight means that you can actually take the unit to just about anywhere you need power, and the PLB 40 is flexible enough to power all kinds of DC and USB powered devices.

The PLB’s LiFePO4 battery will hold up to thousands of charging cycles, which means that you can have that many adventures fueled by whatever awesome stuff you can keep in your electric cooler.  If you’ve been looking for that missing link in the power supply chain for an electric cooler, or for charging media devices or drone batteries, the PLB 40 is definitely worth checking out. 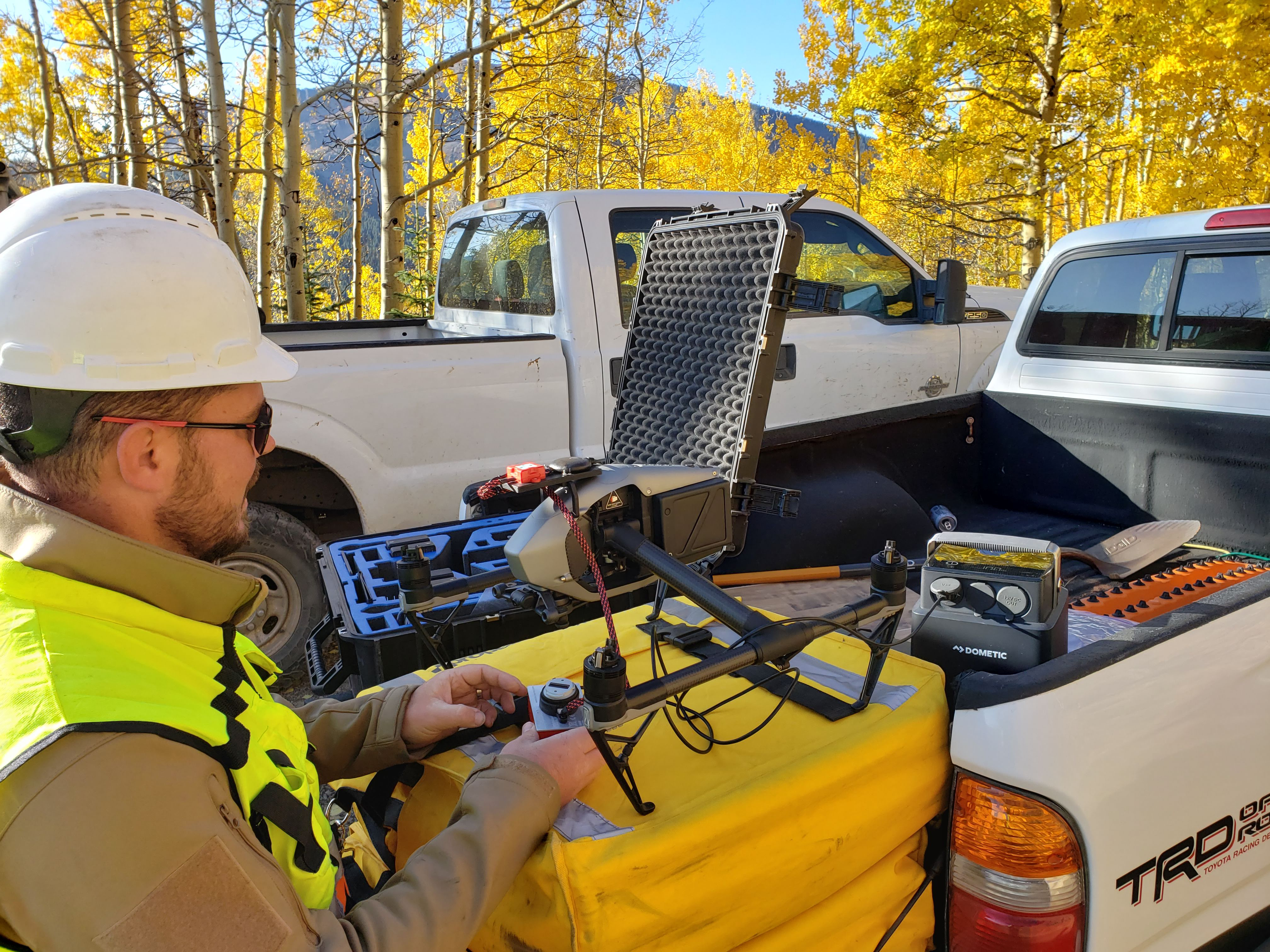 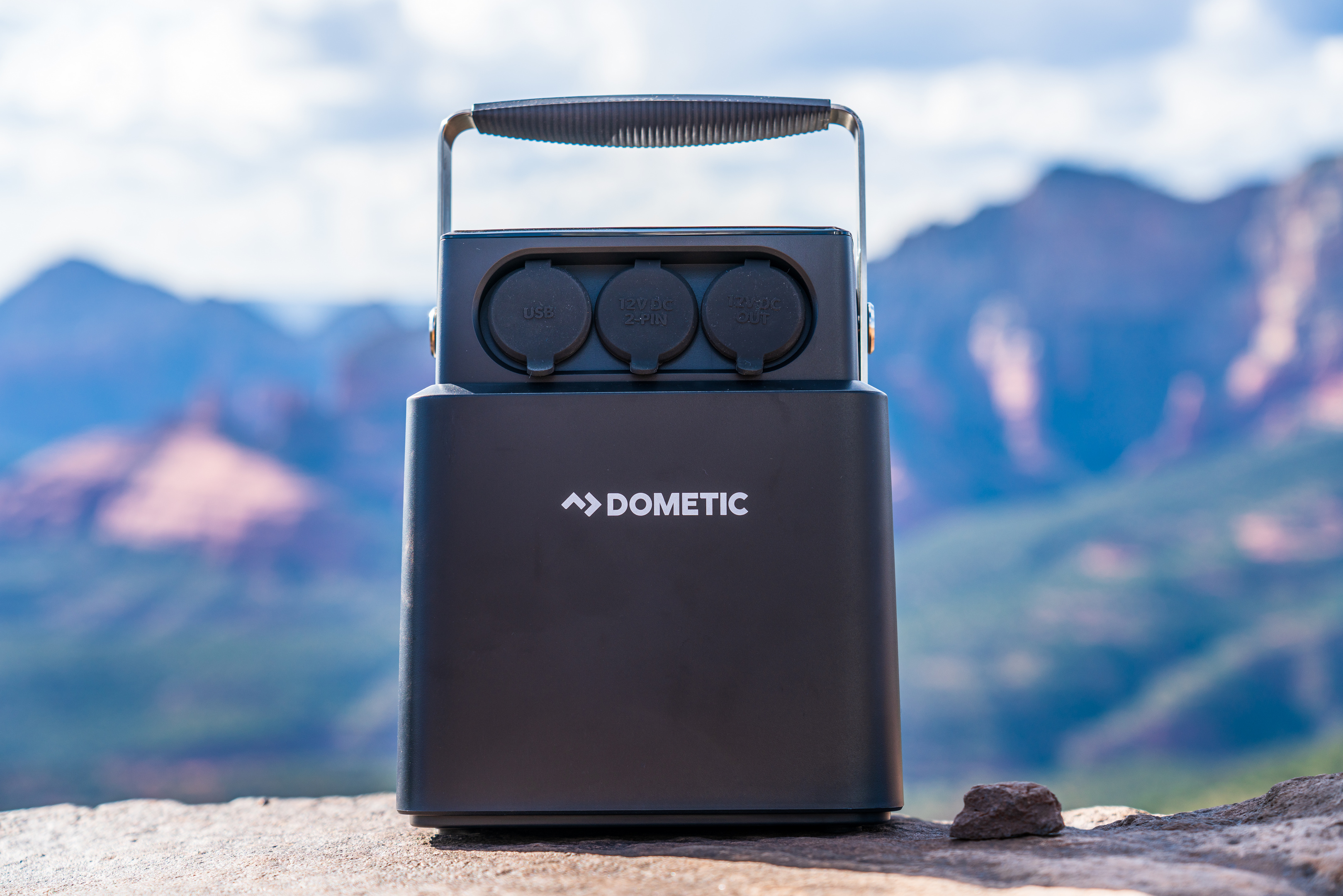 Full Disclosure: Dometic provided a sample PLB 40 at no charge to the author for the purposes of this review.

chad-de-alva
Chad de Alva is a FAA approved drone pilot, filmmaker and photographer based out of Flagstaff, Arizona. Born and Raised in Telluride, Colorado, Chad h...
Just the info I need. Looking for a fridge.
sounds like a neat little power station. I was looking at the Jackery's Explorer 240 portable power station instead of installing a second truck battery for my Engel. I run my wench &amp; Engel off the same battery, at time when Sally &amp; I are on travels &amp; sleep over in a Rest area or truck stop I can pull the plug on my Engel from the 12v. socket in the bed &amp; plug it to a portable power station while sleeping, then on the road plug back to the outlet in the truck bed.
I would be interested in finding out more about using a solar panel to keep it charged up when we are stationary for a few days.
Do you need a charge controller or can you plug the panel directly into it...