I need to start off this review of an electric cooler by saying that I’ve been happy with the ice-powered “super coolers” that I have for keeping things cold.  With a super cooler, as long as you take good care of your ice, it will last for an impressively long time.  Super coolers are leaps and bounds ahead of your run of the mill plastic ice chest, but no matter how good your ice-powered cooler is, there is no beating the laws of thermodynamics and the fact that ice will eventually turn into water inside your cooler.  Water in the liquid state means wet food if you don’t pack your cooler well, and accelerated melting of your remaining ice, which only accelerates the need to procure more ice.  Meanwhile, with a 12V electric cooler, you don’t need to futz with ice, and Dometic has made the process of keeping an electric cooler powered up, and ice cold, so easy that switching to an electric cooler becomes one of easiest, most game-changing things you can do to support your off-grid adventures . 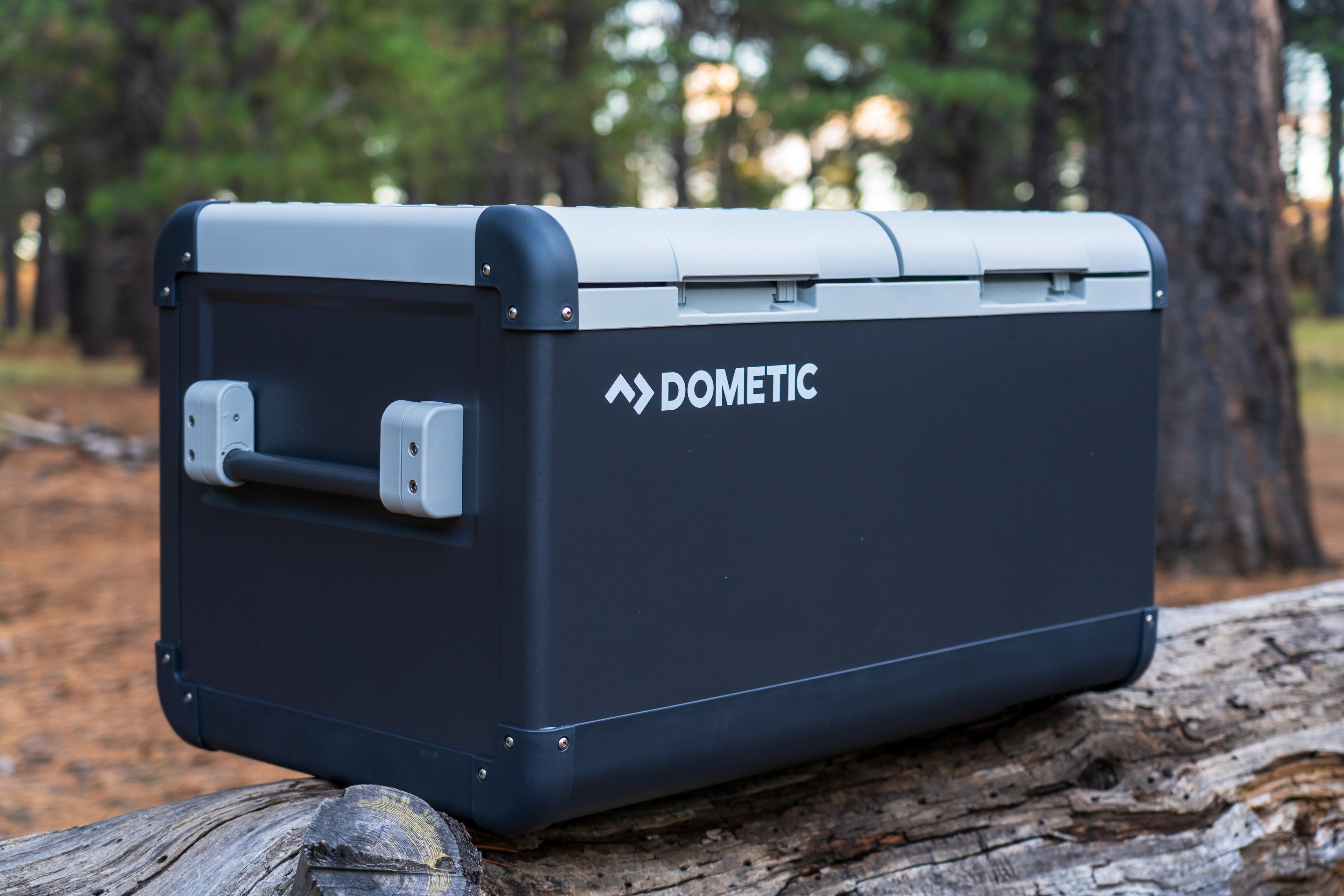 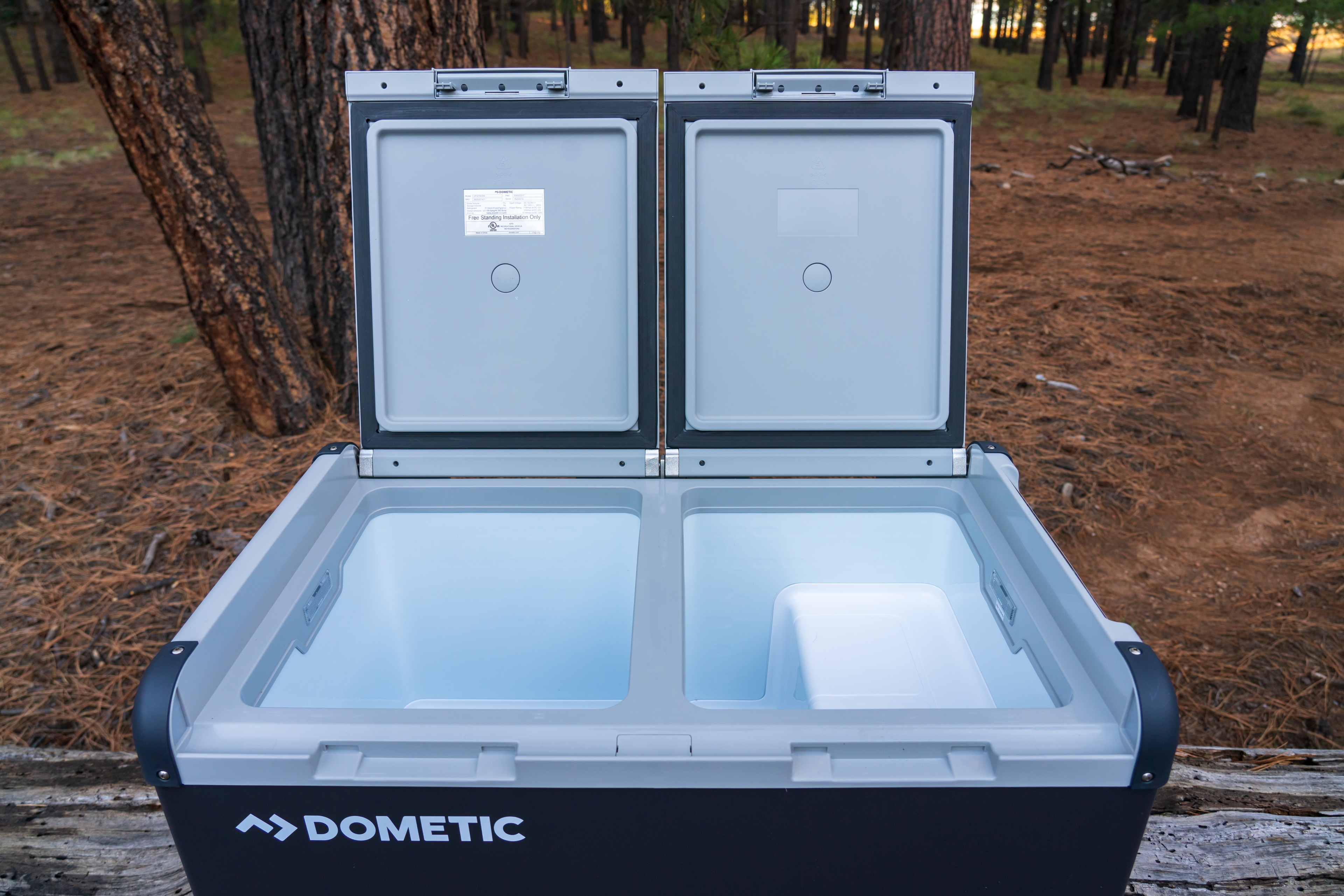 Saying goodbye to ice, and hello to perfectly-cooled food and beverages is a plug and play experience with Dometic’s CFX 75 DZW.  And no, you don’t have to have a dual battery setup to run this electric cooler safely.  Thanks to some modern technology and features, you can enjoy all of the benefits of a highly efficient dual compartment fridge and freezer without ever having to worry about killing your vehicle’s battery.  When on DC power, the unit will monitor the voltage of the power source it’s plugged into, and should the voltage drop below one of three user-selectable thresholds, the unit will automatically power off to save the vehicle’s battery.  The CFX 75 DZW also happens to be very efficient, so you can leave the unit plugged into your vehicle without tripping the low voltage cutoff for some time. 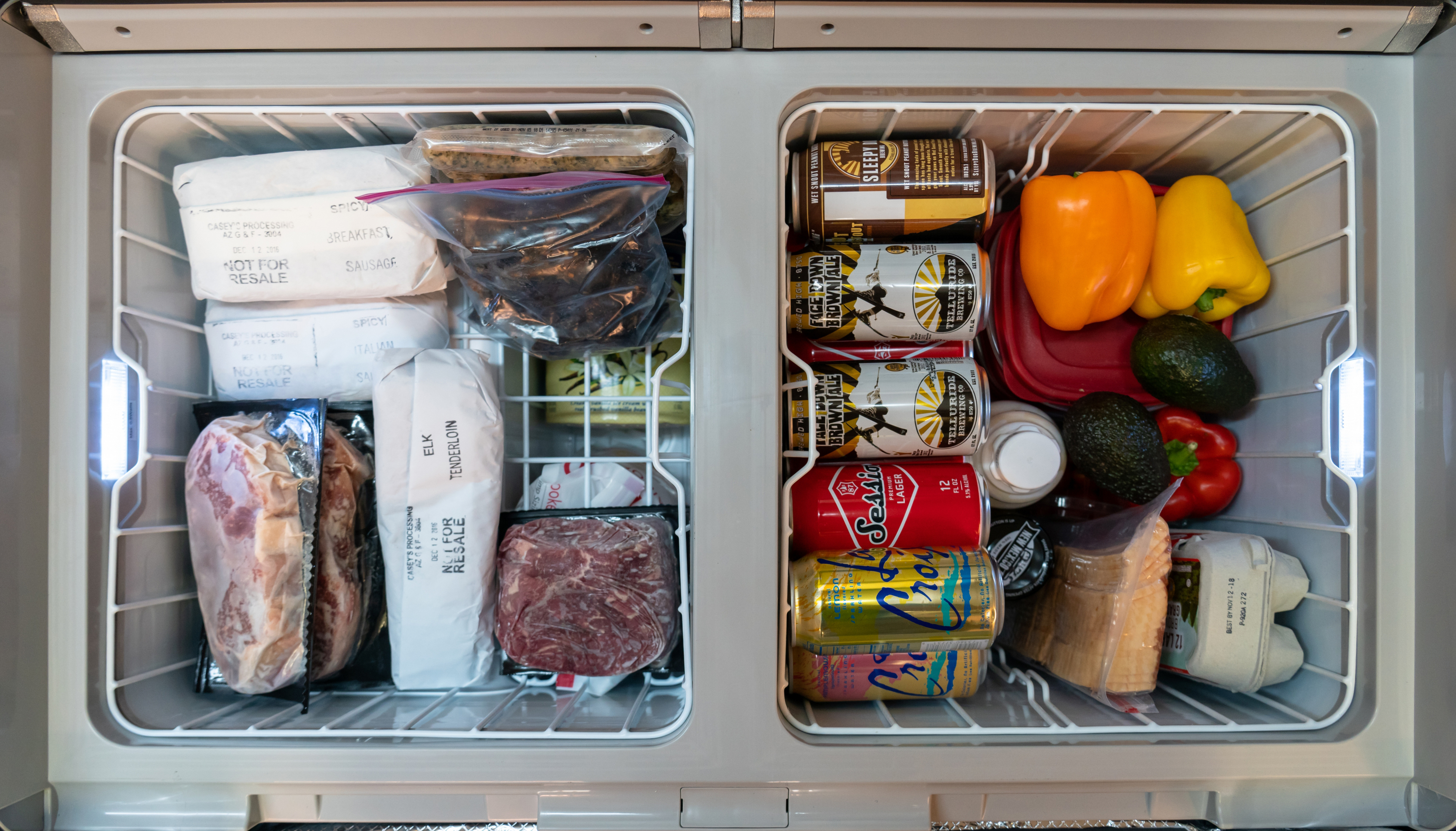 Dometic is well respected in the RV appliance industry, so as you would expect the unit is very thermal and power efficient.  When the compressor isn’t running, the unit will sip power and the unit is so thermally efficient that you’ll wonder if you accidentally turned it off when the compressor doesn’t come back on for such a long time.  Power consumption is modest – at 90 degrees Fahrenheit, Dometic states that the unit will pull 1.30 Amp Hours per hour, or 15.6 Watt Hours per hour at 12 V DC.  Speaking of the compressor, it’s also very quiet, making all of 37 dB(A) when running.  For comparison’s sake the CFX 75 DZW makes less noise than my modern refrigerator at home, and is so quiet that it has made no impact on my quality of sleep when I’m sleeping next to the unit in my truck bed. 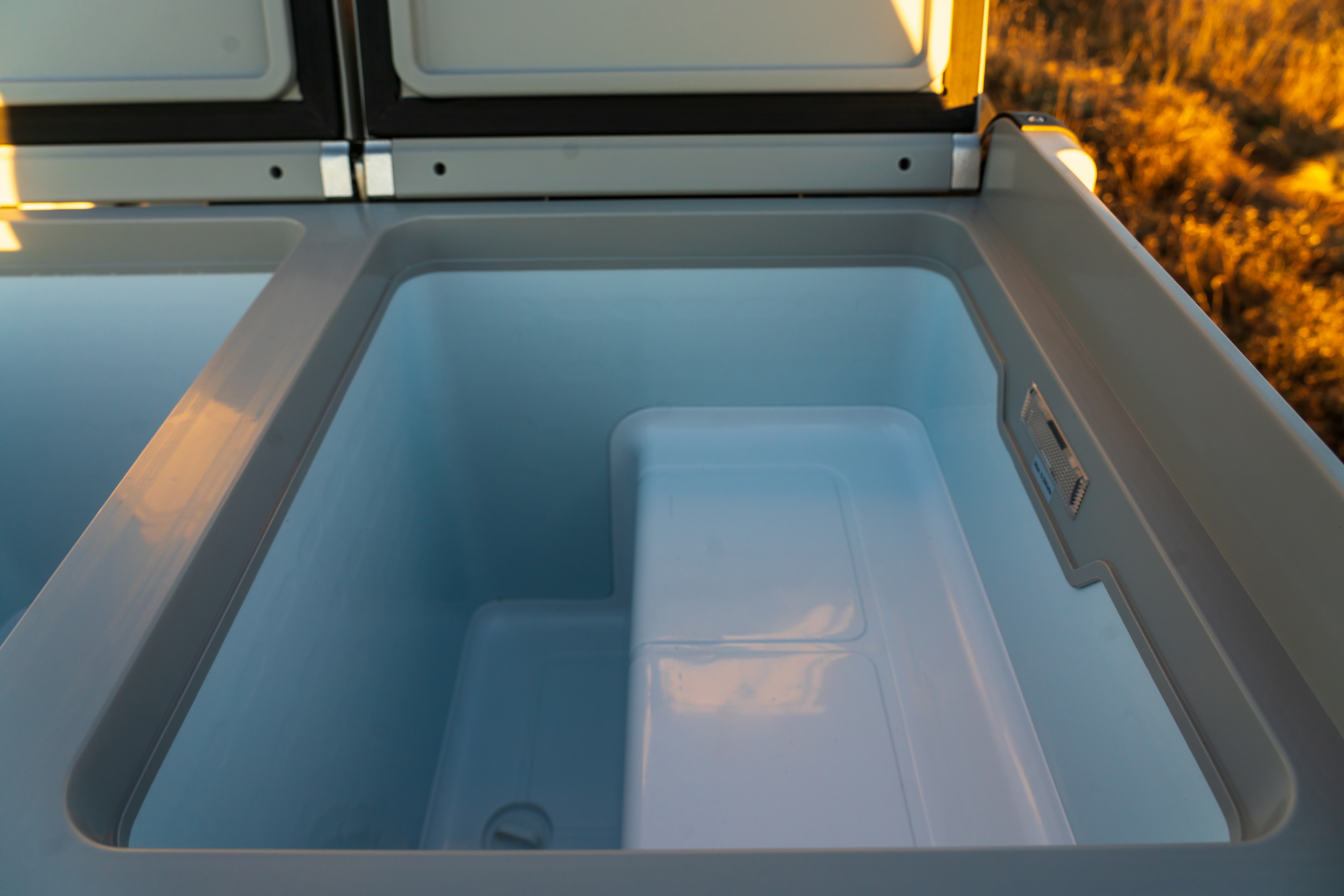 The DZ in CFX 75 DZW stands for dual zone, and that makes this electric cooler a very dynamic unit whose storage volume is 70.001 L.  You can set the temperature of each compartment individually, (from -7 to +50 F) so you can have two freezer compartments, two refrigerated compartments, or one of each, or only one compartment on, depending on what your needs are.  Each compartment can be divided further with the included baskets, allowing you to protect your crushable items or make it easy to pull out your most-used items in one go.  (Or to hide the ice cream or your favorite beverages.)  Each compartment has its own user-reversable and independently openable lid.  When it comes to finding items in the dark, each compartment also has a LED light that provides plenty of illumination and will start flashing should the lid get left open for too long. 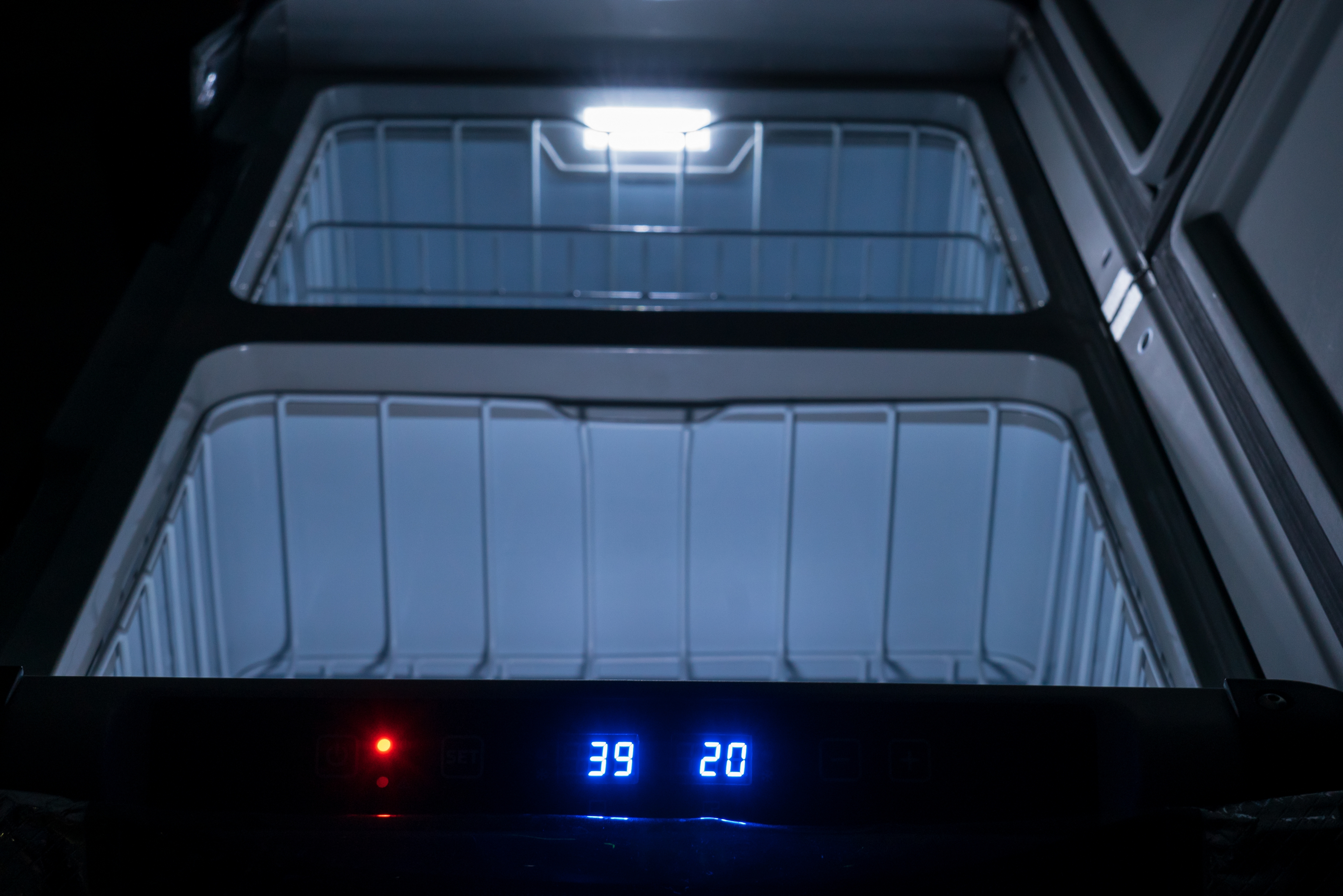 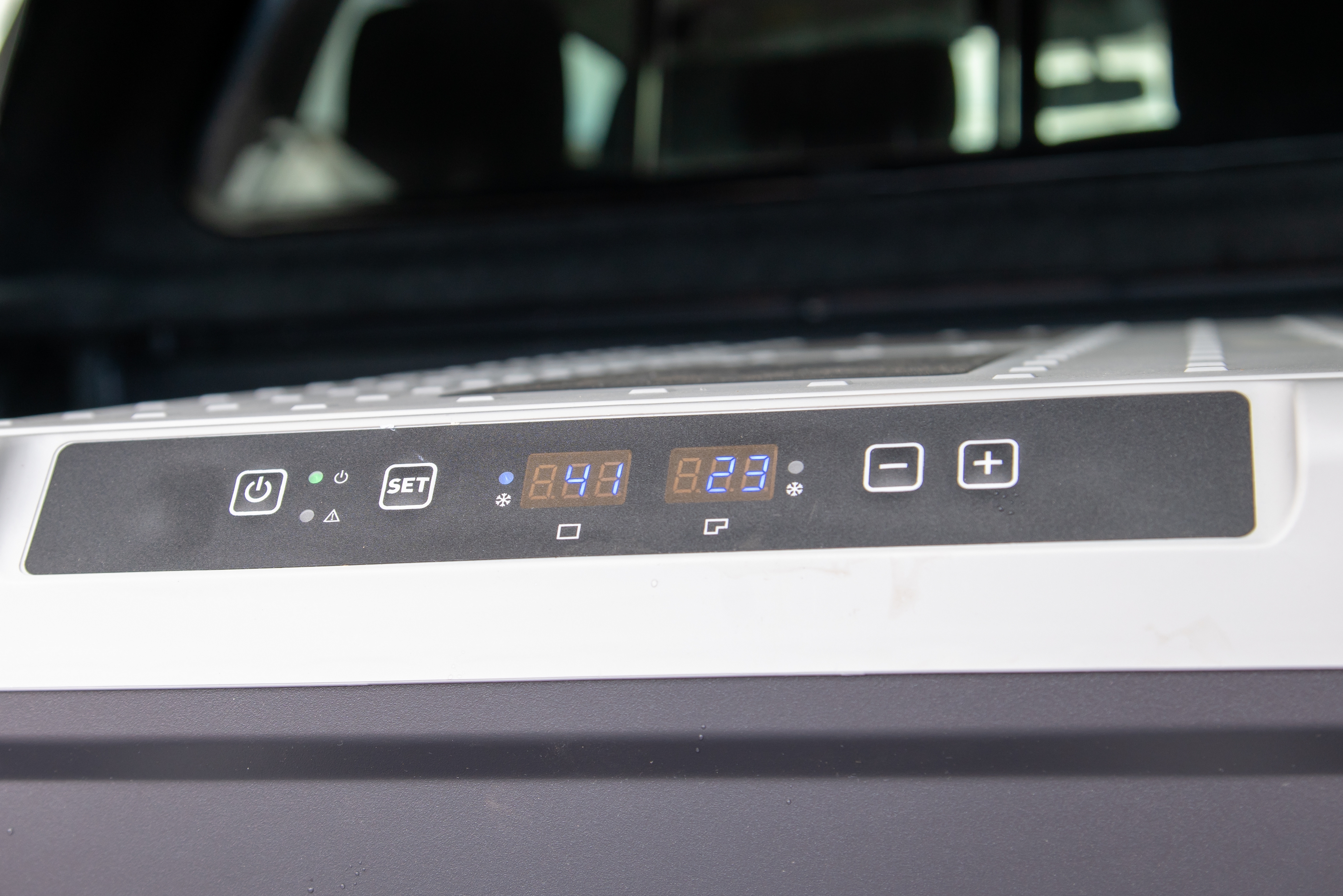 Further utilizing modern technology and the computers that we all carry in our pockets, the CFX 75 DZW also has Wi Fi capability, allowing you to perform a number of functions remotely.  With the CFX app, you can set the temperatures in each compartment, set battery protection levels, set temperature alarms, and see your supply voltage when on DC power, among other features.  Having the CFX app is handy when you’re going to be parked for some time in camp, as you’ll know if and when you need to haul out your solar setup or provide some power to your battery system.  More on power in a minute. 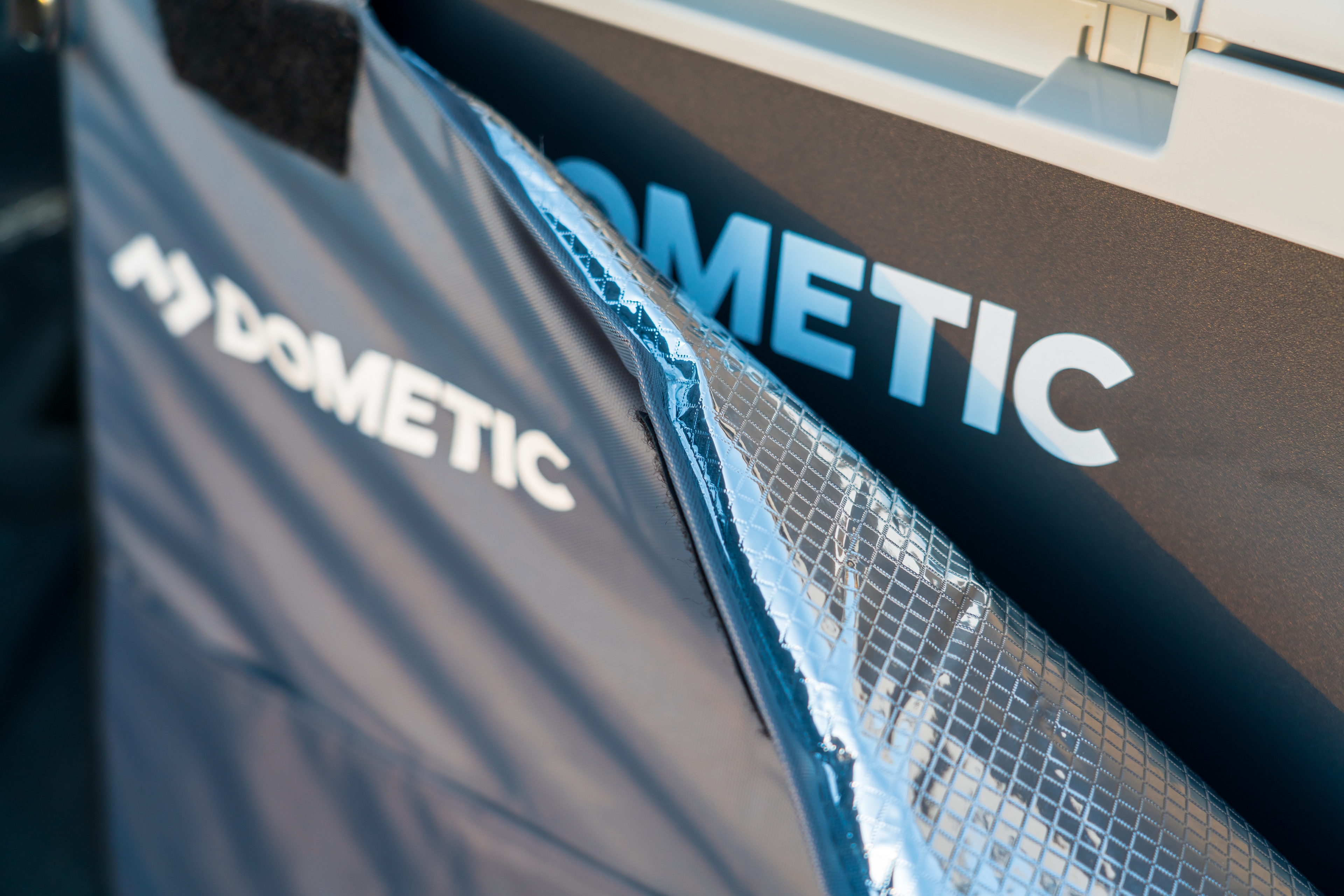 Dometic also makes an insulated cover for the CFX 75 DZW, which is a well-made jacket that fits over the unit to provide additional insulation, and therefore reduce energy consumption.  To see just how much of a difference the insulated cover made, I performed the following test once with the insulated cover and once without:  In a temperature-controlled environment, I started with a room temperature unit, and cooled one compartment to 38 degrees and the other to 20 degrees.  I then loaded the unit with the same amount of food, and let the unit sit for a week – opening the lid of each compartment six times each day for 15 seconds each time I opened a lid.  I had the unit powered through a power meter, and at the end of my test the insulated cover caused the unit to use 19.5% less energy. 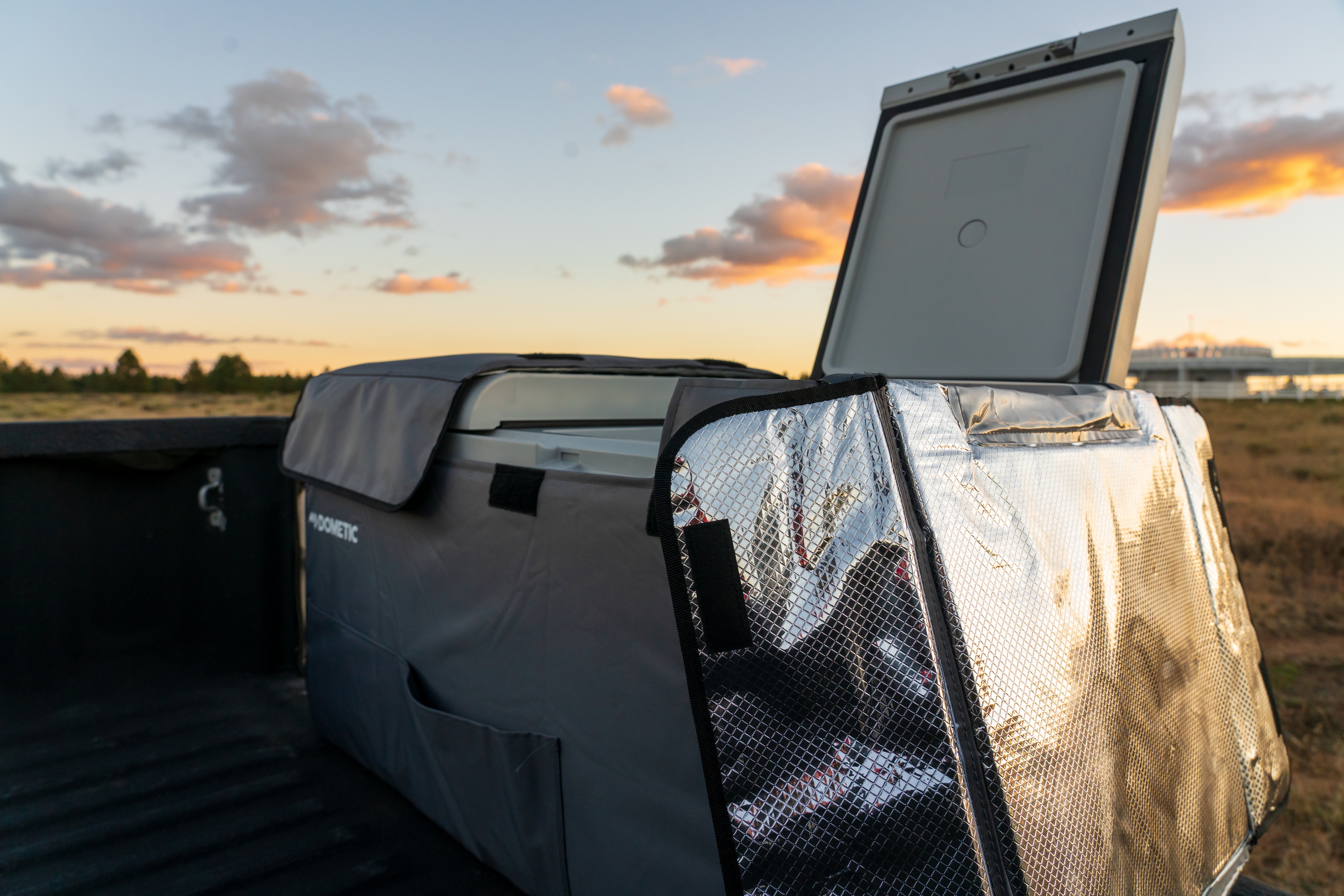 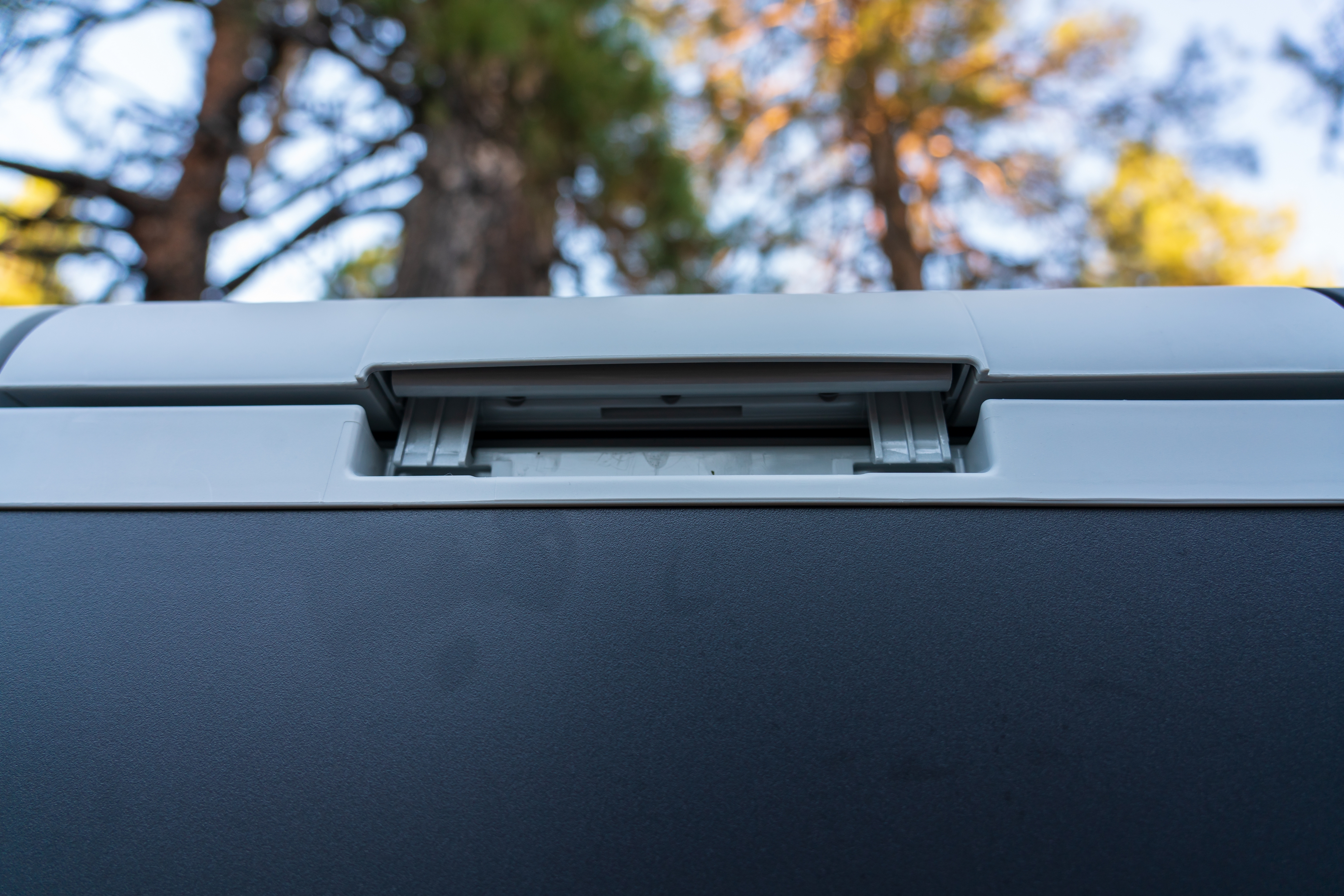 Yet, the insulated cover highlights one CFX 75 DZW’s two shortcomings, one of which is that the latch side of the unit’s lid isn’t the most obvious.  I watched folks who had never seen the unit open the insulated cover (opening a few Velcro flaps) to access the lid and several folks reached for hinge side of the lid by mistake.  Obviously, if you know your gear this won’t be an issue, but don’t be surprised if it throws your buddy for a loop the first few times they try and get in your fridge or freezer. Maybe that’s a blessing in disguise as your IPA’s remain elusive. 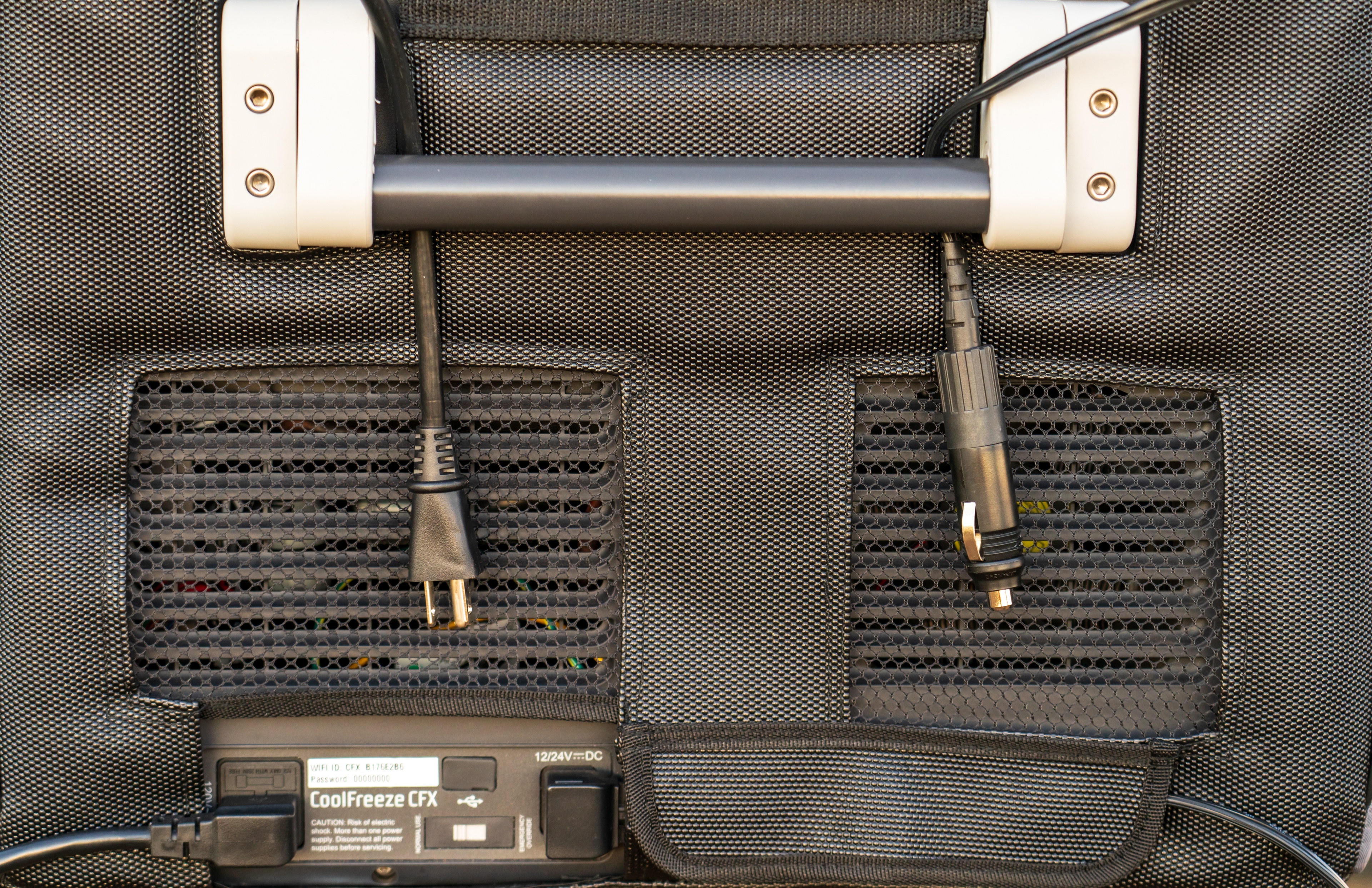 The other issue is the USB port that Dometic had the forethought to put on the cooler.  While it might seem like a great idea as the USB port is in a prime location, (you always make it easy to get to your fridge / freezer) it’s only able to output 500-milliamps.  This low output current makes the USB port all but useless, as many devices won’t work, or will take forever and a day to charge as a result of the low current output.  I hope that the next revision of CFX electric coolers will get a more powerful USB port or two, as it’s a great idea for a world that can never have enough USB power. 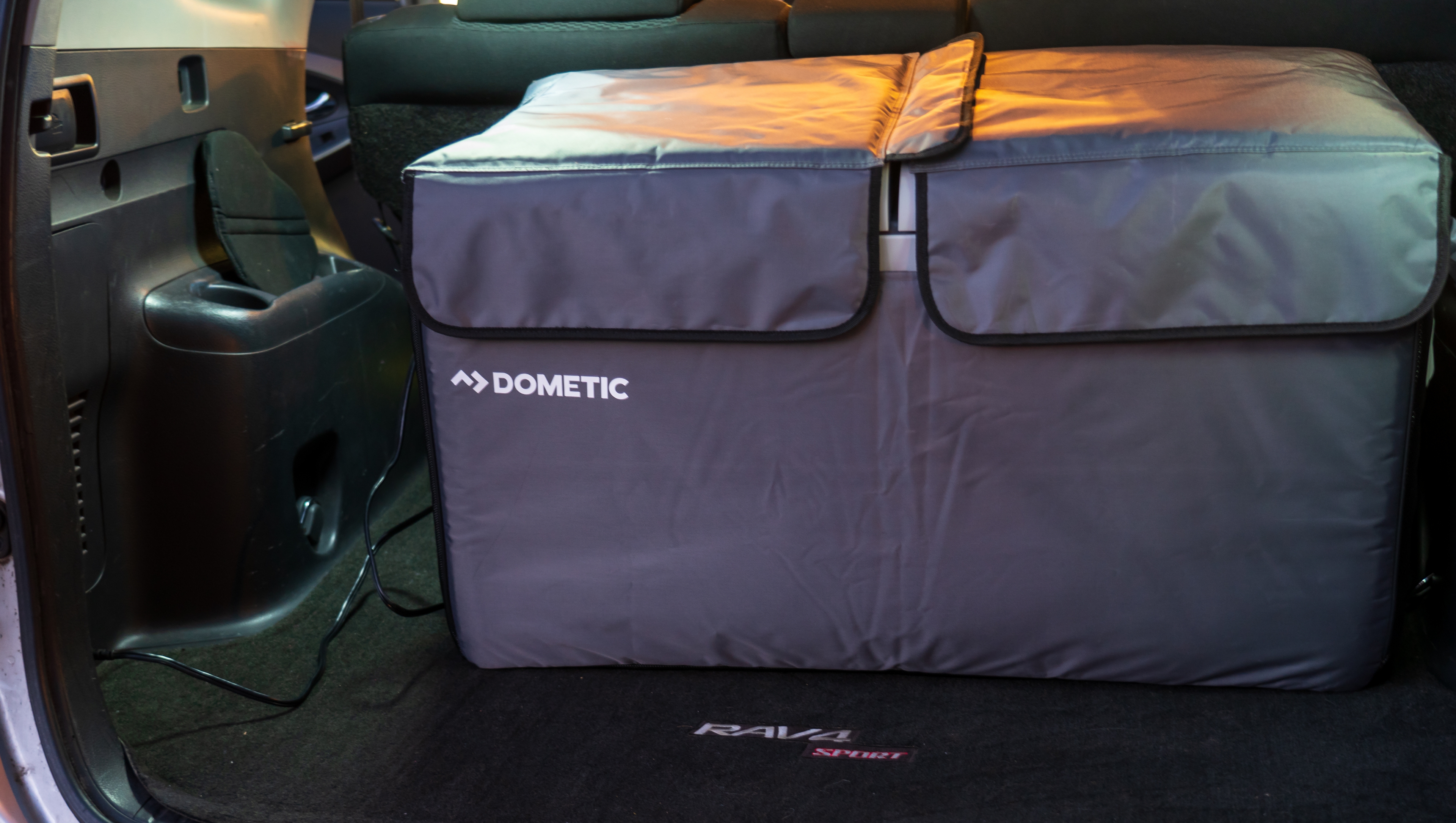 Even when you’re not out adventuring, the CFX 75 DZW is a great tool to have on hand.  Heading out for errands on a hot day?  No need to worry about food spoiling in your car with an electric cooler in the back to keep things cold.  Hosting a social event where you need some extra fridge or freezer space?  Simply setup your electric cooler wherever it’s most convenient.  Having a highly-efficient fridge and / or freezer that can go just about anywhere is game changing for so many more activities than vehicle-based adventure travel.

Dometic has made the CFX 75 DZW so easy and idiot-proof to use that you’ll wonder why you didn’t get on the electric cooler train sooner.  Ice-powered super coolers are definitely head and shoulders over el cheapo coolers that fall apart after a few trips, but super coolers still consume ice, and ice at the store costs money and still melts, and that water can still get in or on things you want to stay dry in your cooler.  Not having to care for ice (unless you need it for putting in your adult beverages, and it turns out its really easy to keep ice with a freezer) is a profound upgrade to your adventuring experience:  You can keep frozen stuff frozen for days on end, or keep your favorite items at just the right temperature.  With a 12V fridge/freezer, you can break out the ice cream on day 10, and never have to worry if all that bouncing around off-road caused your cheese or other sensitive provision to go swimming in the bottom of your ice powered cooler. 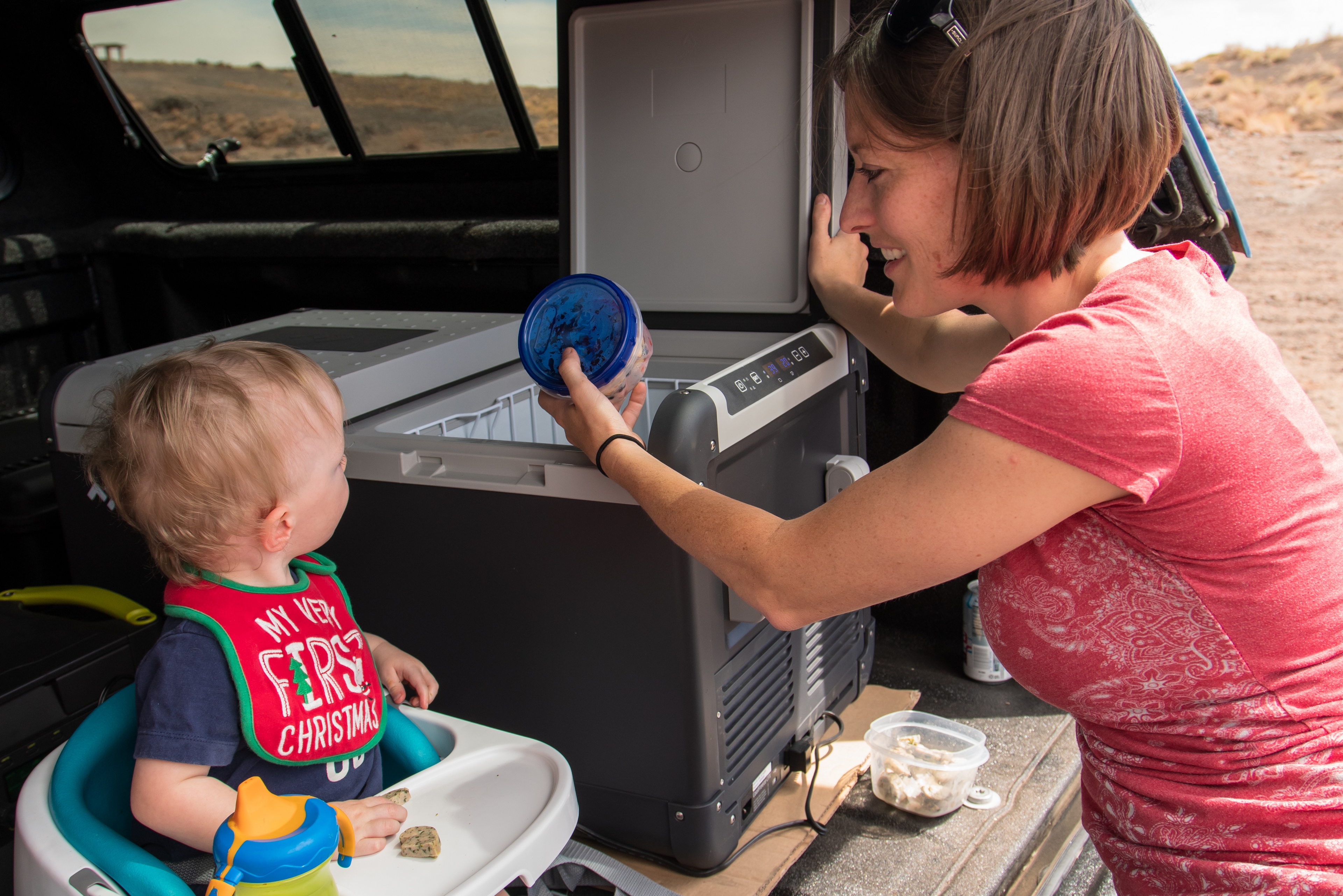 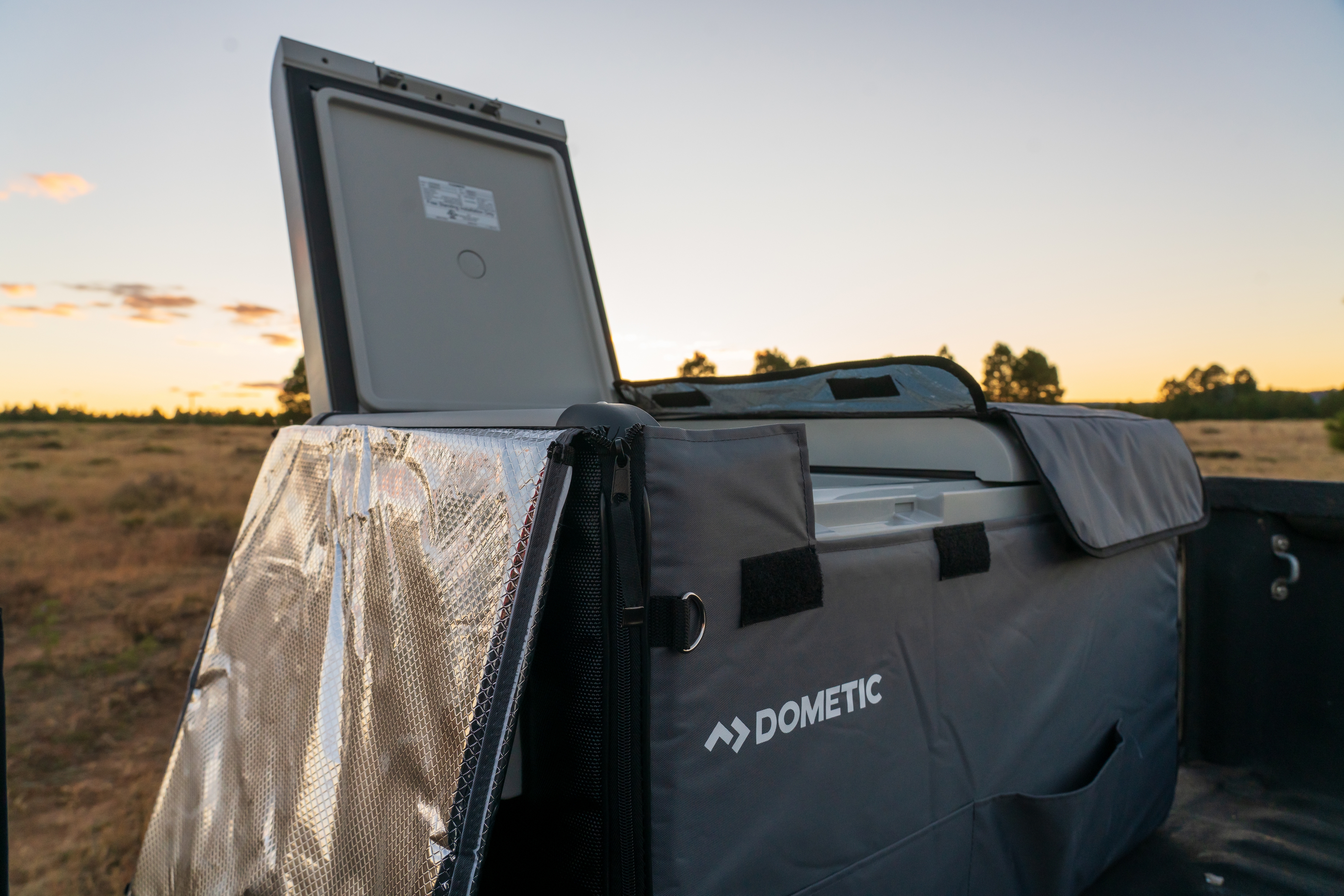 The CFX 75 DZW is a great option for anyone looking to graduate from ice-powered coolers with a unit that is very dynamic and can work in almost any vehicle or off-grid abode. Having a low voltage cutoff and remote monitoring with the WiFi-enabled CFX app allows you to use this electric cooler literally anywhere that’s within reach of an AC or a cigarette-style power outlet.  The unit can safely draw from a single battery vehicle and will take it’s self out of the game before it takes your starting battery out.  The WiFi App provides a great way to make sure your fridge / freezer is doing what it needs to be, and you’ll never wonder if the lid was left open – as long as you’re able to see the flashing light, or in WiFi range.  All of this is packed into a sturdy, well-made unit that has so far held up great to thousands of miles of remote travel over the last few months.  If you’re ready to give your adventuring food supply a serious upgrade, take a look at a Dometic CFX series electric coolers. 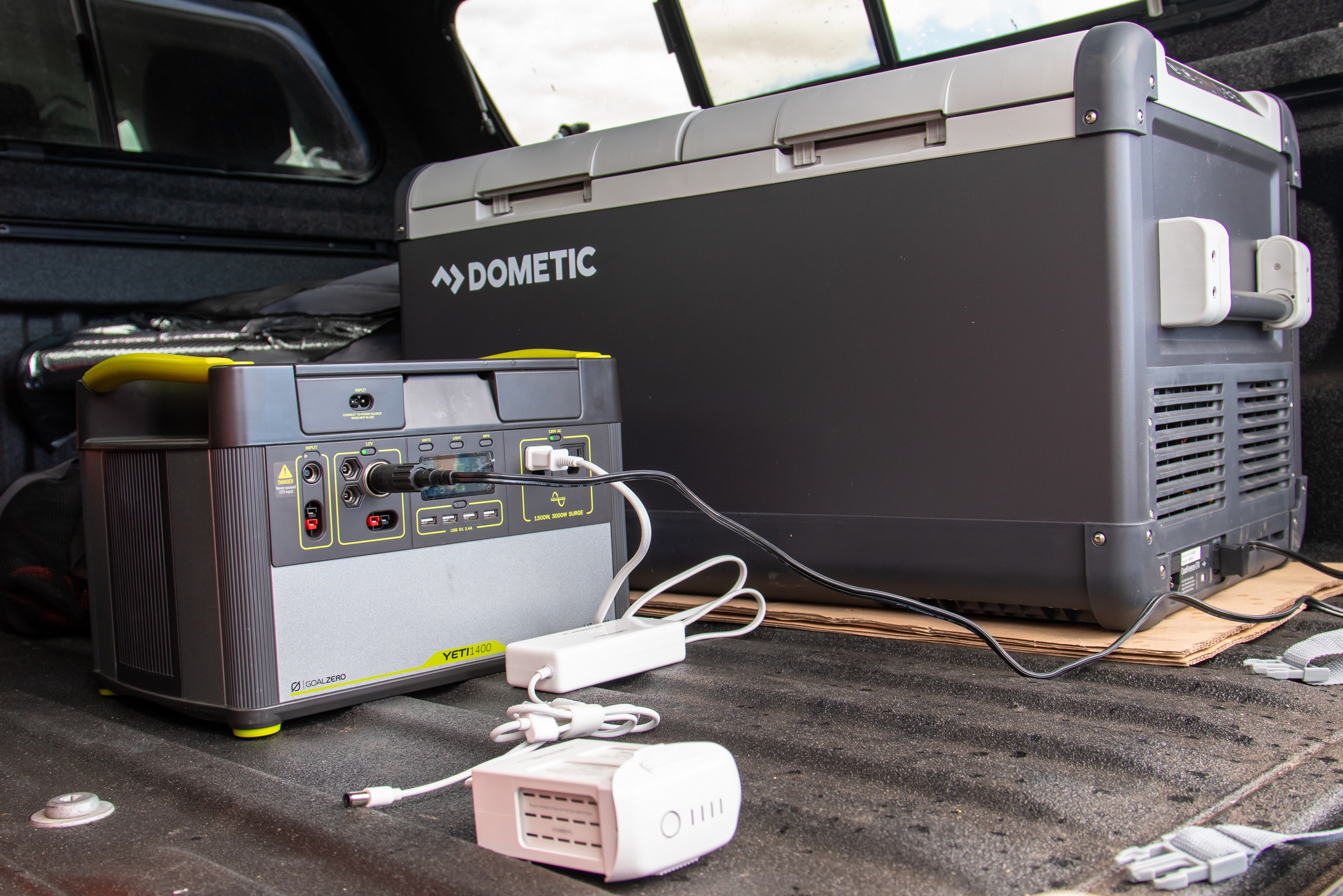 A word on Power and Dual Batteries

Let’s talk power for a minute.  Running a Dometic CFX series electric cooler in your vehicle can be done with no modification to your vehicle, assuming that you have a 12-volt cigarette-style outlet that is always energized, (not switched with your key) and is rated for handling the current of your particular fridge / freezer. If you’re like me, and only own Toyotas – adding a not-switched circuit isn’t hard, just do it correctly with properly rated wire and fusing.  (or get such a circuit installed professionally).

If you’re going to be parked for more than a couple of days, bring a solar charging system or a portable battery that has the capacity to go the duration of your stay, like a Goal Zero Yeti.  Dometic is also going to be releasing a portable battery tailored to powering their electric coolers in early 2019.  Regardless of what power setup you use, you should always take good care of your vehicles’ battery by keeping it charged (you do plug your vehicles into the grid when they’re going to be sitting for a while, right?), and you should always carry a way to jump start your vehicle like a jump battery.

For the record, there’s absolutely nothing wrong with having a properly configured, isolated, dual battery setup in your vehicle.  Yet, don’t feel like you have to have one to be able to use an electric cooler.  The name of the game here is to go prepared, and that means having the power generating and / or power storage capacity to see you through your trip with plenty of power to spare – because sometimes you will have to wait out that storm for a couple of days.  Or better yet, you’ll just want to stay out longer. 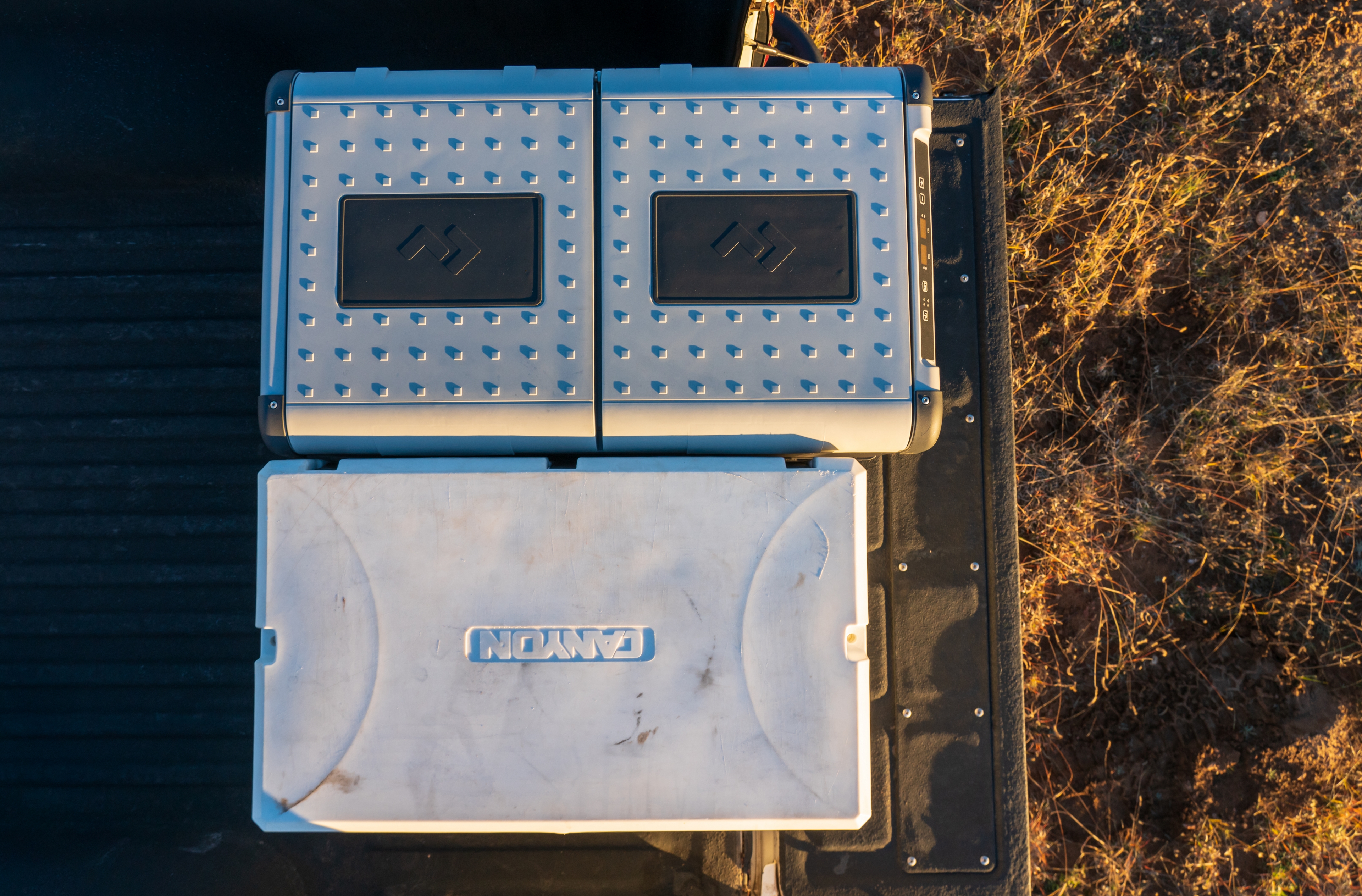 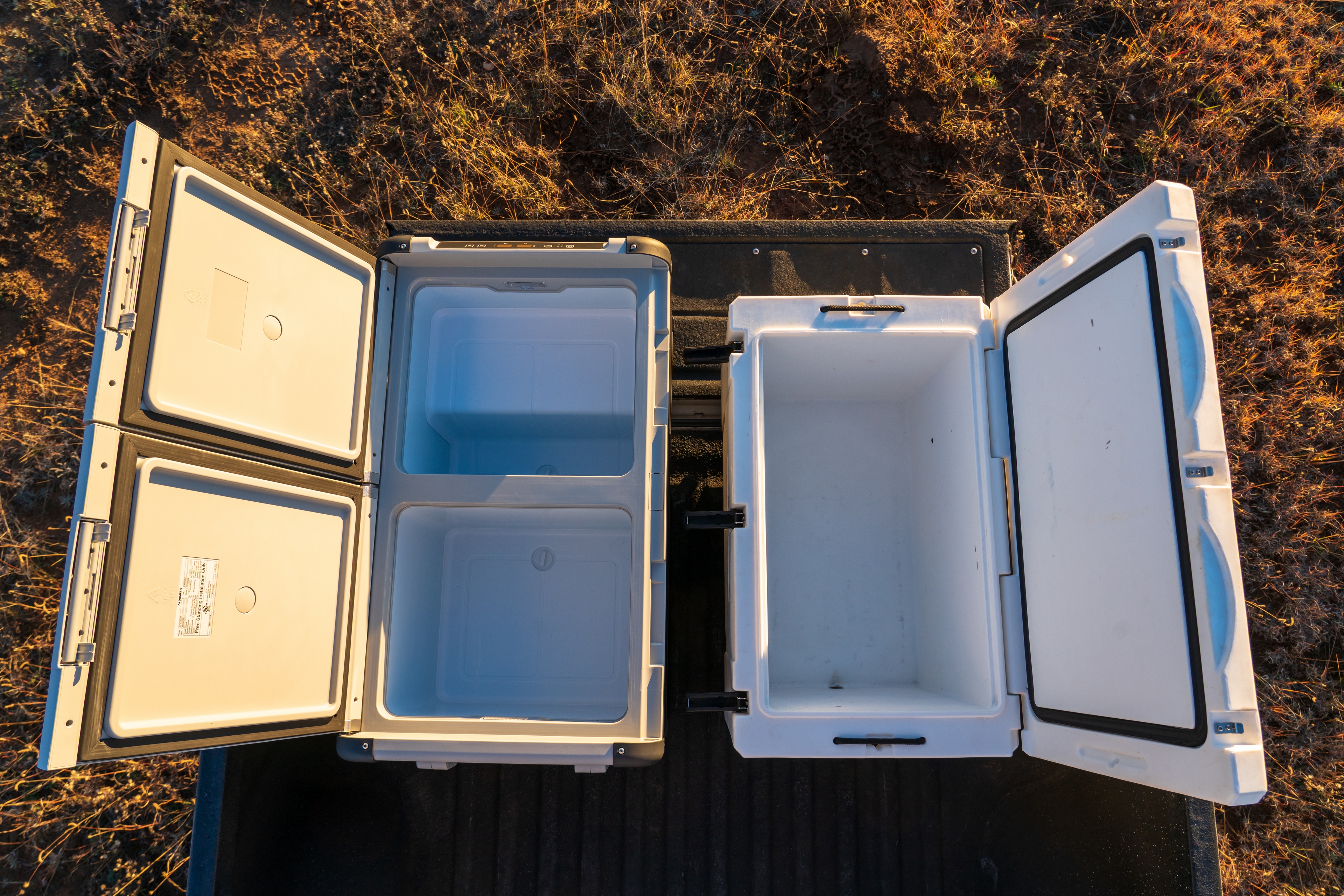 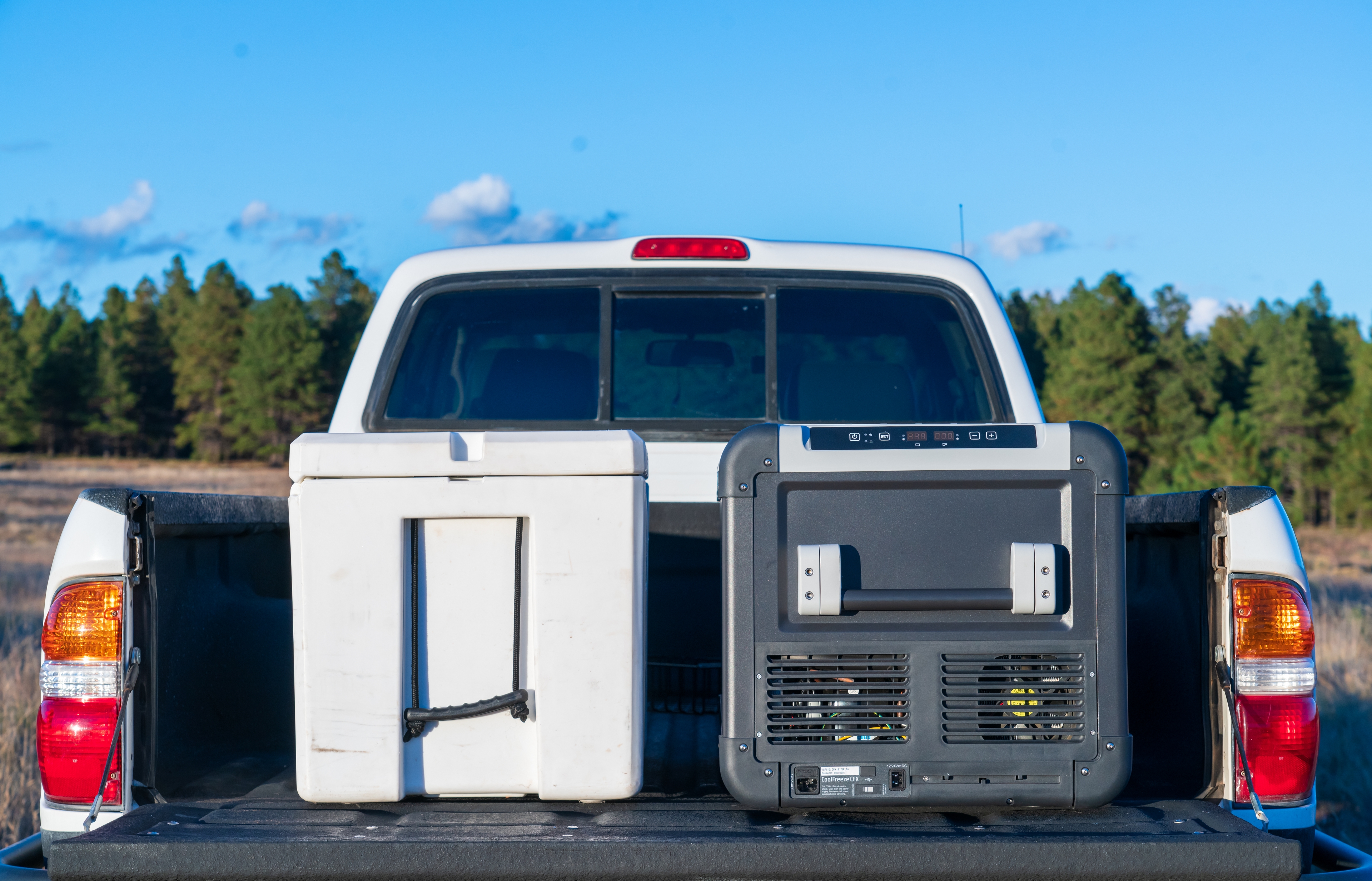 Full Disclosure:  This equipment was provided to the author at no cost for the purpose of this review on American Adventurist.