The winter of 2017-2018 has been a rough one.  Snowfall has been well below average in the Southwest, and that’s made for scary conditions both in terms of snowpack stability (lots of avalanches) and hazard coverage (stumps and rocks).  The sad truth is that since the New Year, two individuals I’ve known personally who were both experienced winter backcountry travelers have died while backcountry skiing and snowboarding.  I’m not sharing this with you to try and scare you away, but to point out the fact that winter backcountry recreation can be very dangerous.  Yet the backcountry is also one of the most enjoyable places on earth, which explains why folks seek out the peace of the wilderness in every season.  If you want to snowbike in the backcountry and make it home at the end of your ride, then you need to have the gear, knowledge, and training to safely ride in backcountry avalanche terrain. 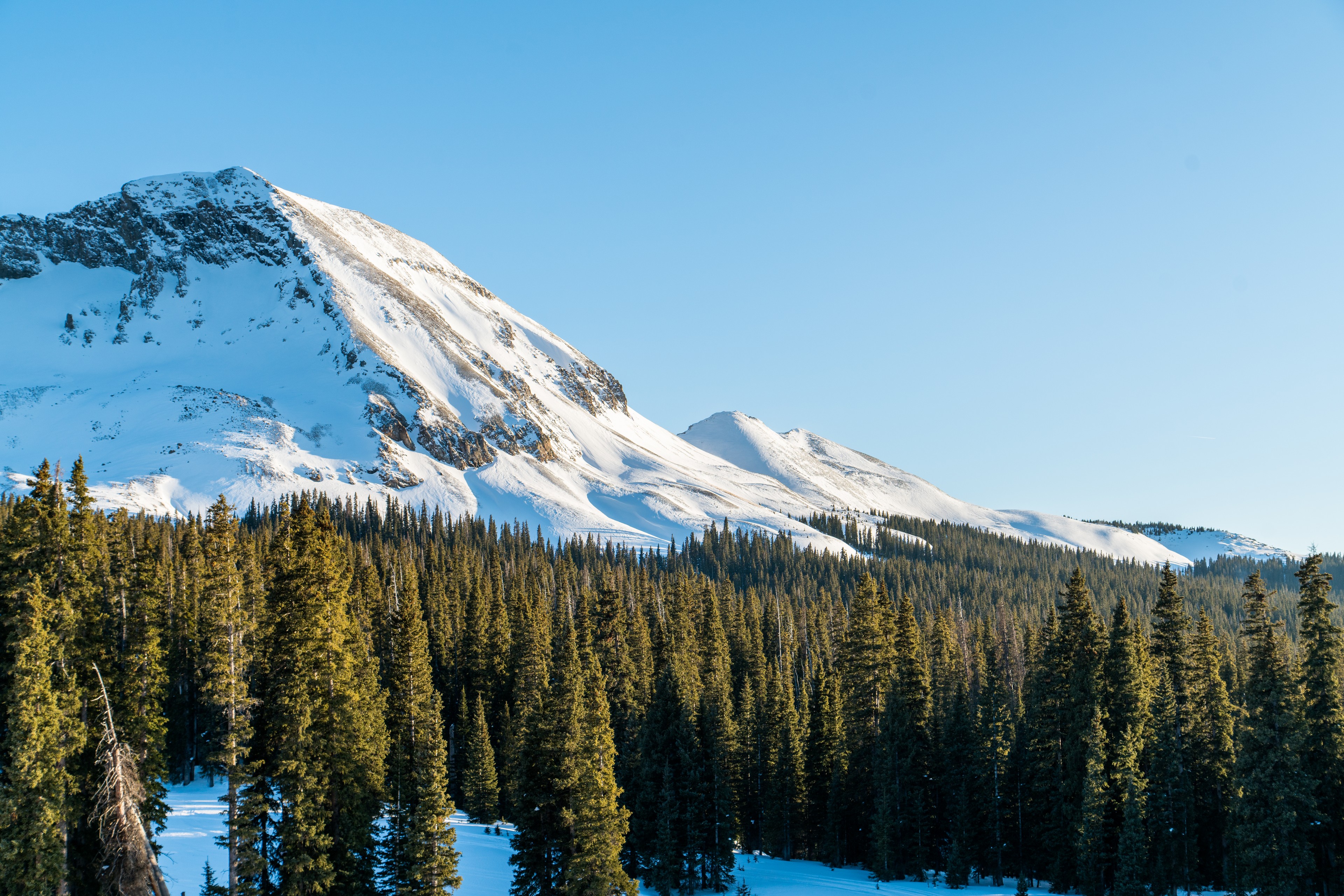 THERE WILL ALWAYS BE MORE TO LEARN

Snow science and snow safety are two disciplines that I would strongly encourage you to approach with the mindset of “there is always something to learn.”  You can get a doctorate degree in snow hydrology, so no, that’s not an embellishment on the amount of learning potential.  There’s also a great reason to continually practice with your avalanche gear, because if someone in your party is buried in an avalanche, seconds can mean the difference between a successful rescue and a body recovery.  If that someone buried is you, you’re going to want highly skilled buddies coming to your rescue, so make sure the folks you ride with are on the same level of training and preparedness. 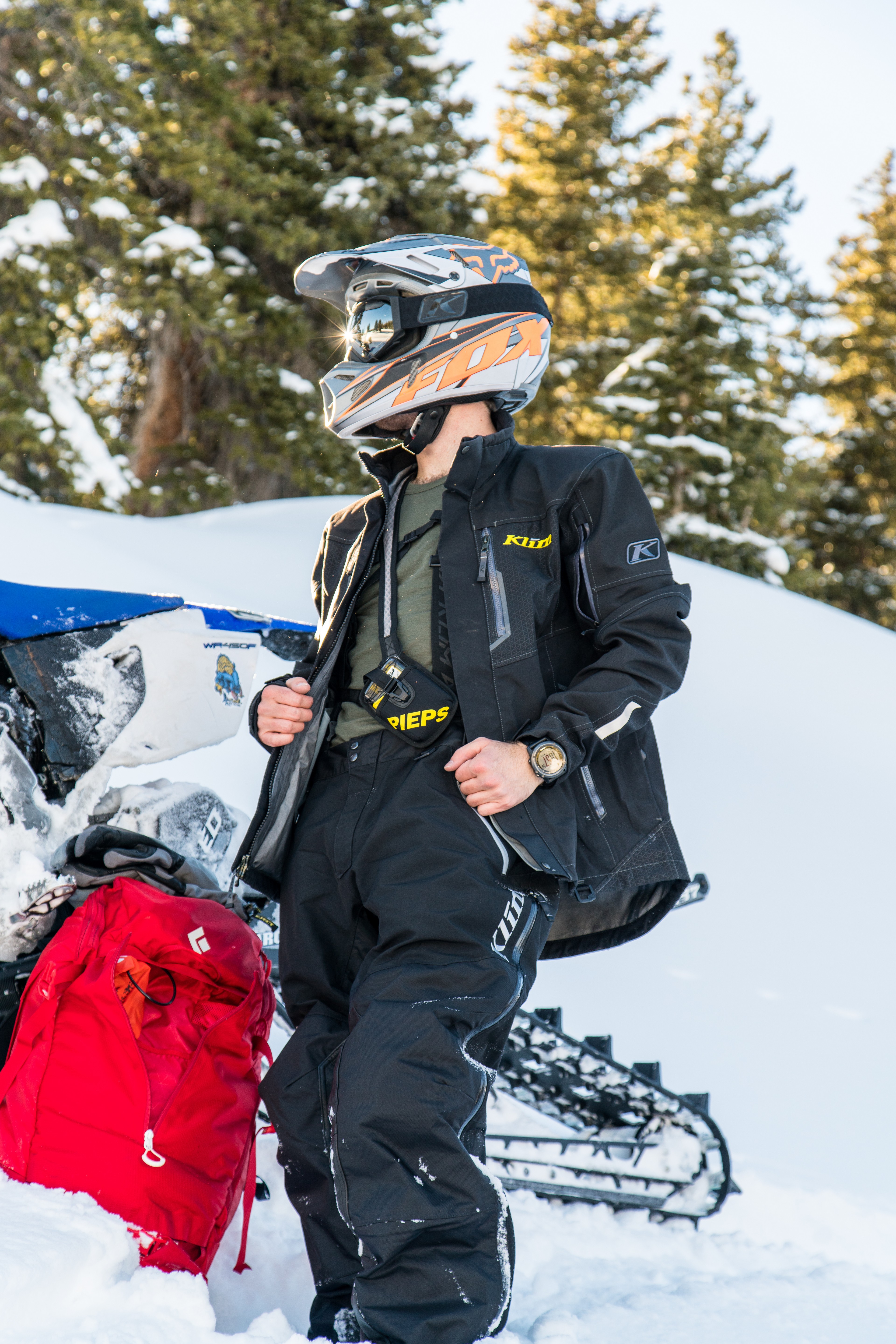 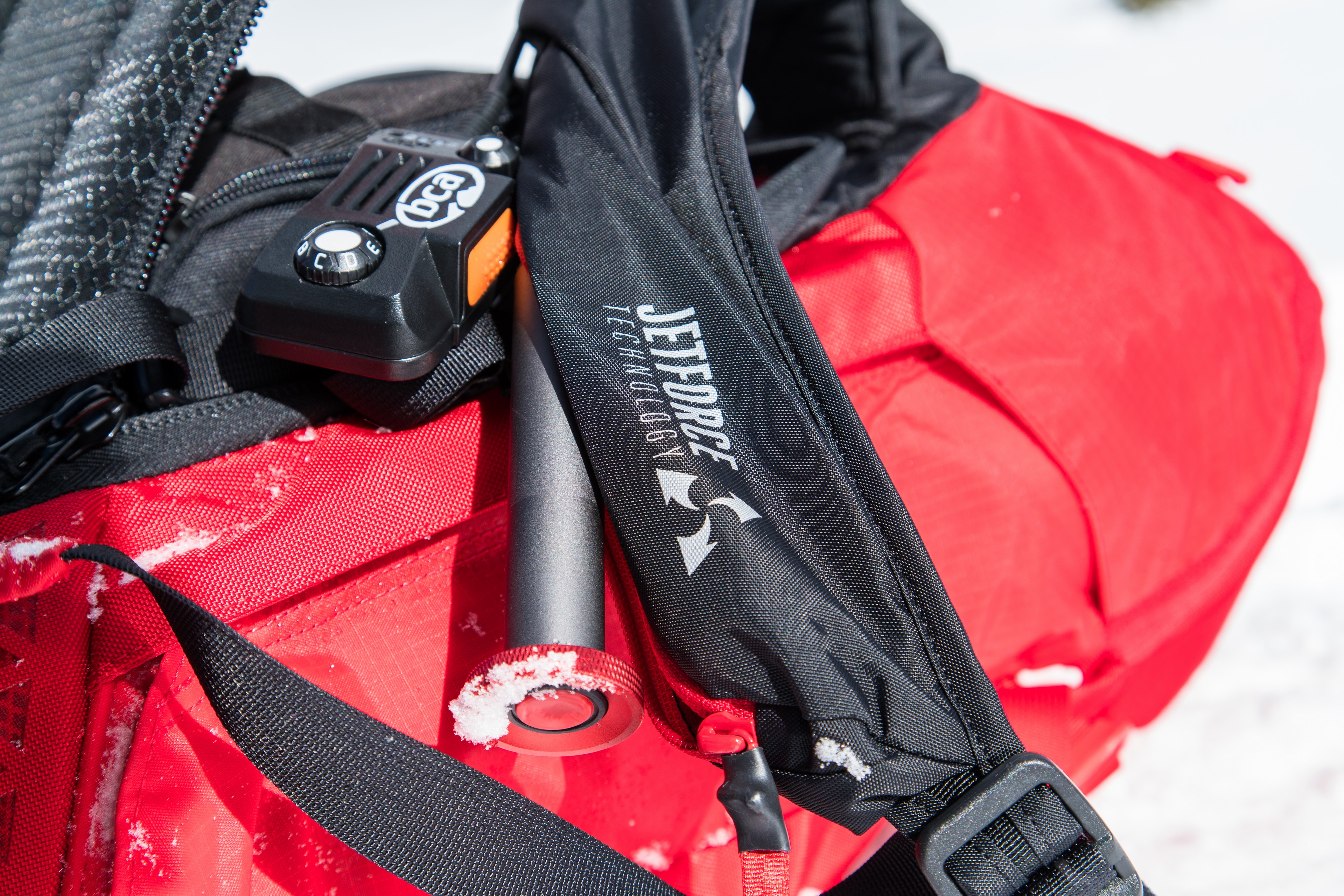 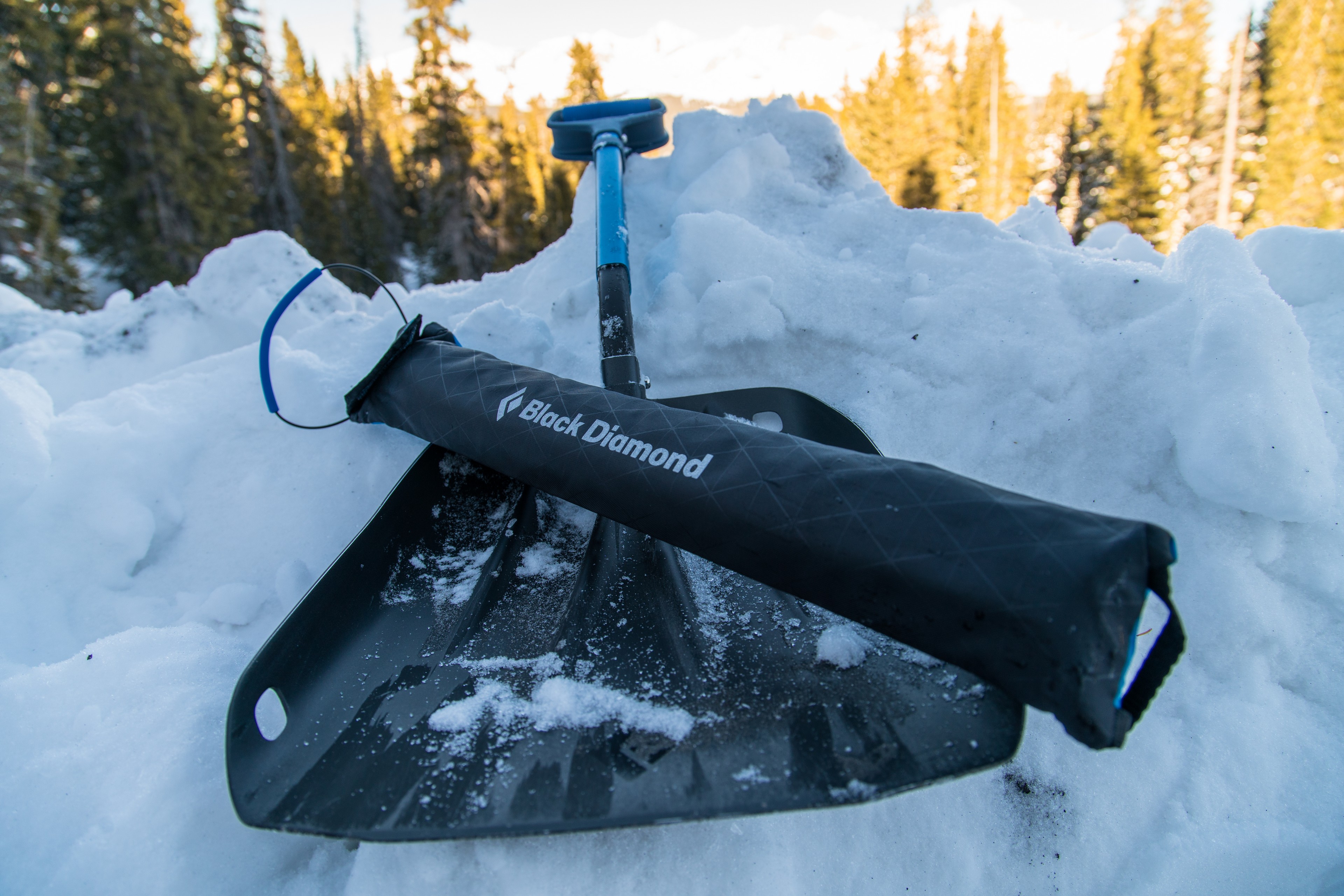 Standard avalanche kit consists of a shovel, probe, and transceiver which is commonly called a beacon.  I’m personally a big fan of carrying the biggest shovel I can fit in my pack, so I’m currently carrying Black Diamond’s Evac 9 shovel.  Yes, it takes up more space and weighs more than other options out there – but when it comes time to dig, I can move snow much faster and dig more effectively than if I were using a tiny shovel (have you tried to dig a hole while standing with a foot long shovel?  It doesn’t work so well).  Probes are typically available in aluminum and carbon fiber—I own both, and use both, so I’d say it’s a matter of preference.  Just make sure your probe can be assembled quickly and will lock into its assembled form.  Beacons could take up a number of articles to cover completely, so I’ll just say that I’ve been using the Peips DSP Pro for the last few winters, and have been really happy with it.  Having the ability to mark multiple buried beacons is a huge help when searching in a multiple burial situation. 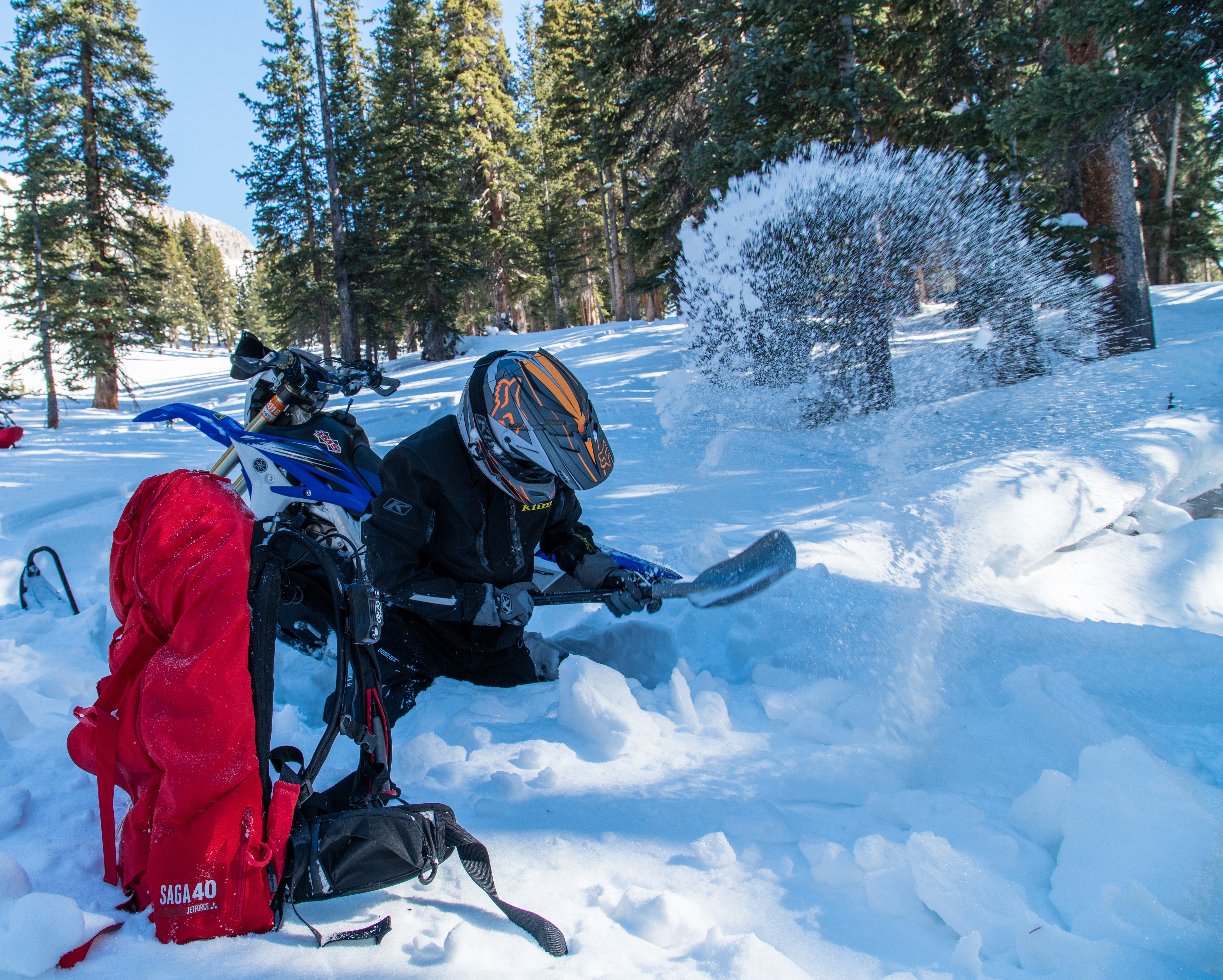 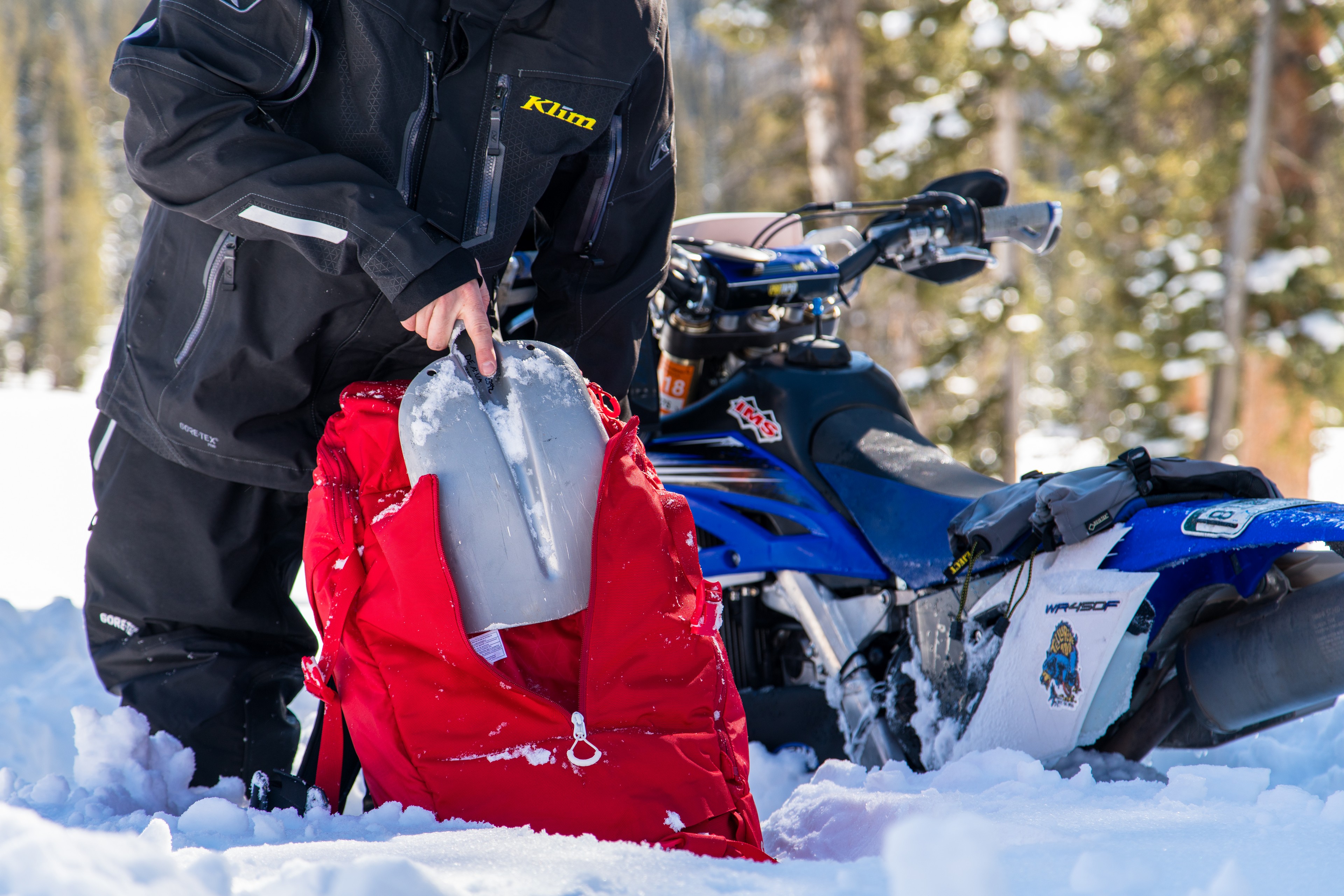 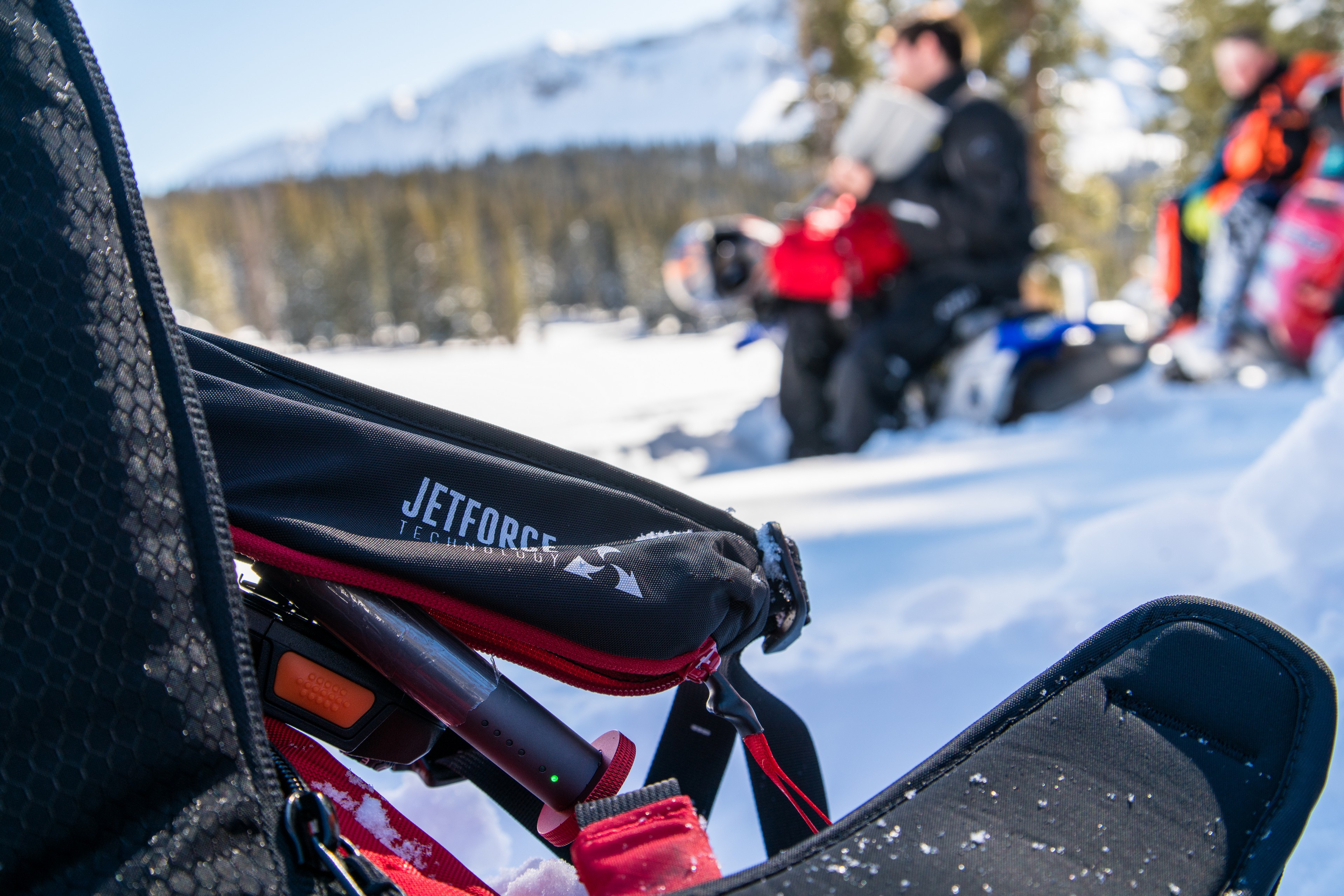 Yet the most important feature on any beacon is going to be the skill of the operator using said beacon.  So practice with your beacon of choice to the point that using it becomes an instinct. Then go practice some more.  If you ski or snowboard, many ski areas have beacon basins where you can do practice searches on beacons buried by ski patrol.  If you don’t live by a ski area, have a buddy go bury a transceiver in a backpack for you to go find. 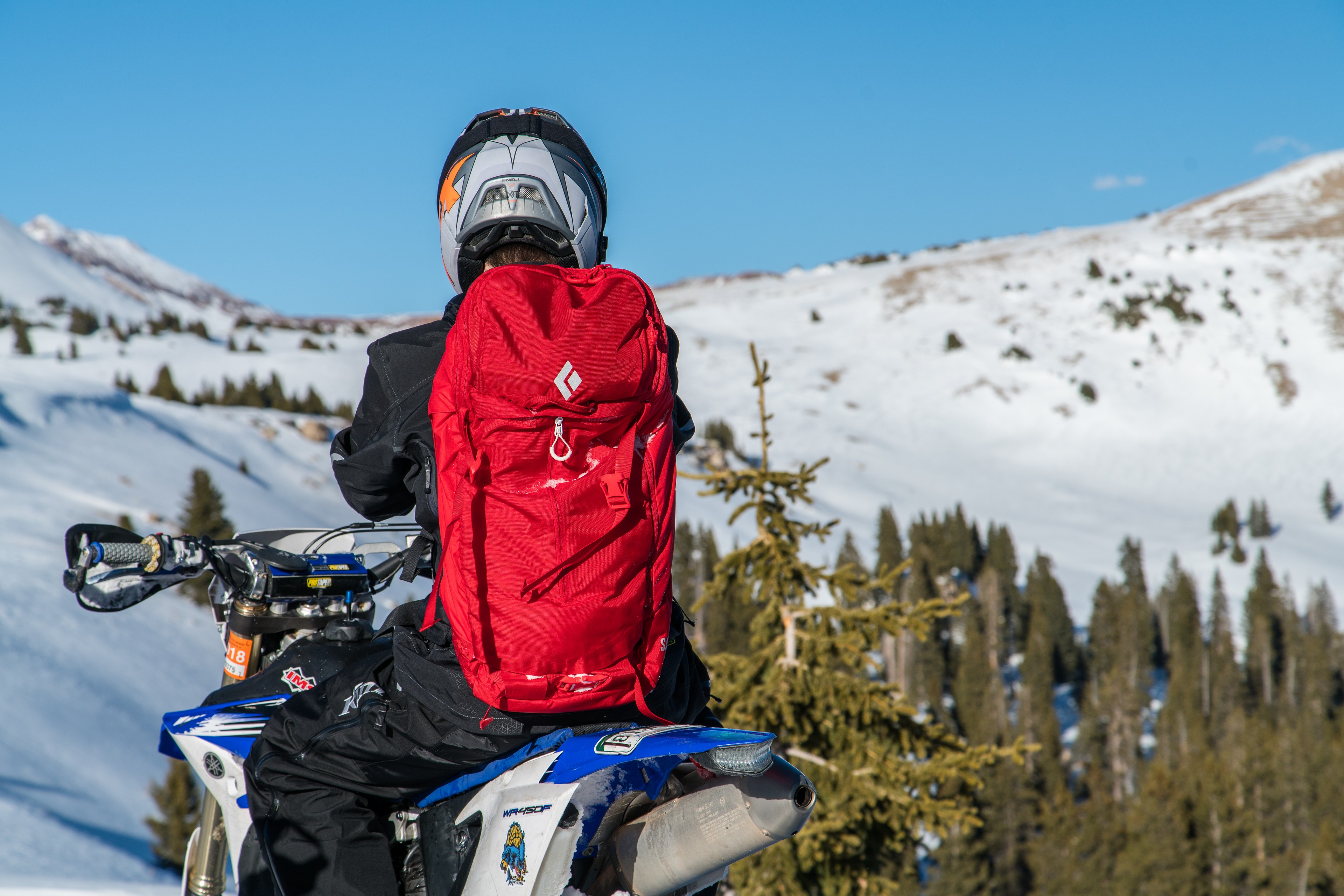 Airbag backpacks are also becoming much more common in the backcountry because they reduce the chances of burial, and have the potential to protect the wearer from injury.  Black Diamond has taken things a step further with its Jetforce line of airbag backpacks that can also create a pocket of breathing air, should a burial occur.  Jetforce packs use a battery powered ducted fan to inflate their airbags where other brands use CO2 (Jetforce is an accurate name, the thing sounds like a jet engine when you deploy it).  Black diamond’s packs can be deployed multiple times on a single battery charge (CO2 packs are a one inflation per cartridge deal), which is a comforting feature when you consider that Mother Nature isn’t limited to only one avalanche per day. 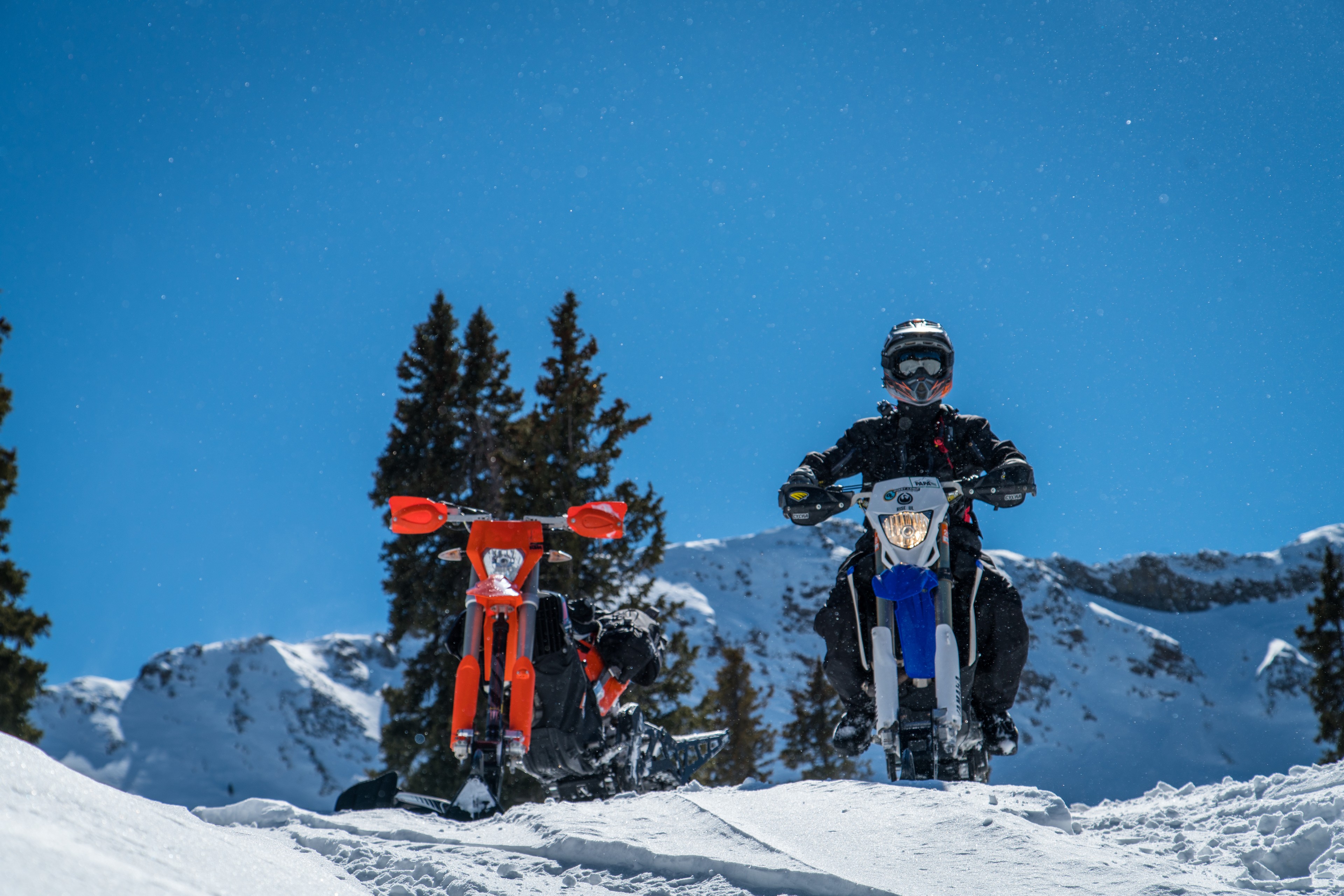 Lastly, carrying radios is a great way for your group to communicate, especially when moving through hazardous terrain one at a time.  Many places have adopted radio communication plans so that multiple groups in the same area can communicate and make plans that do not risk the safety of other groups.  Once you’ve picked up all of your avalanche gear, it’s time to go take an avalanche class. 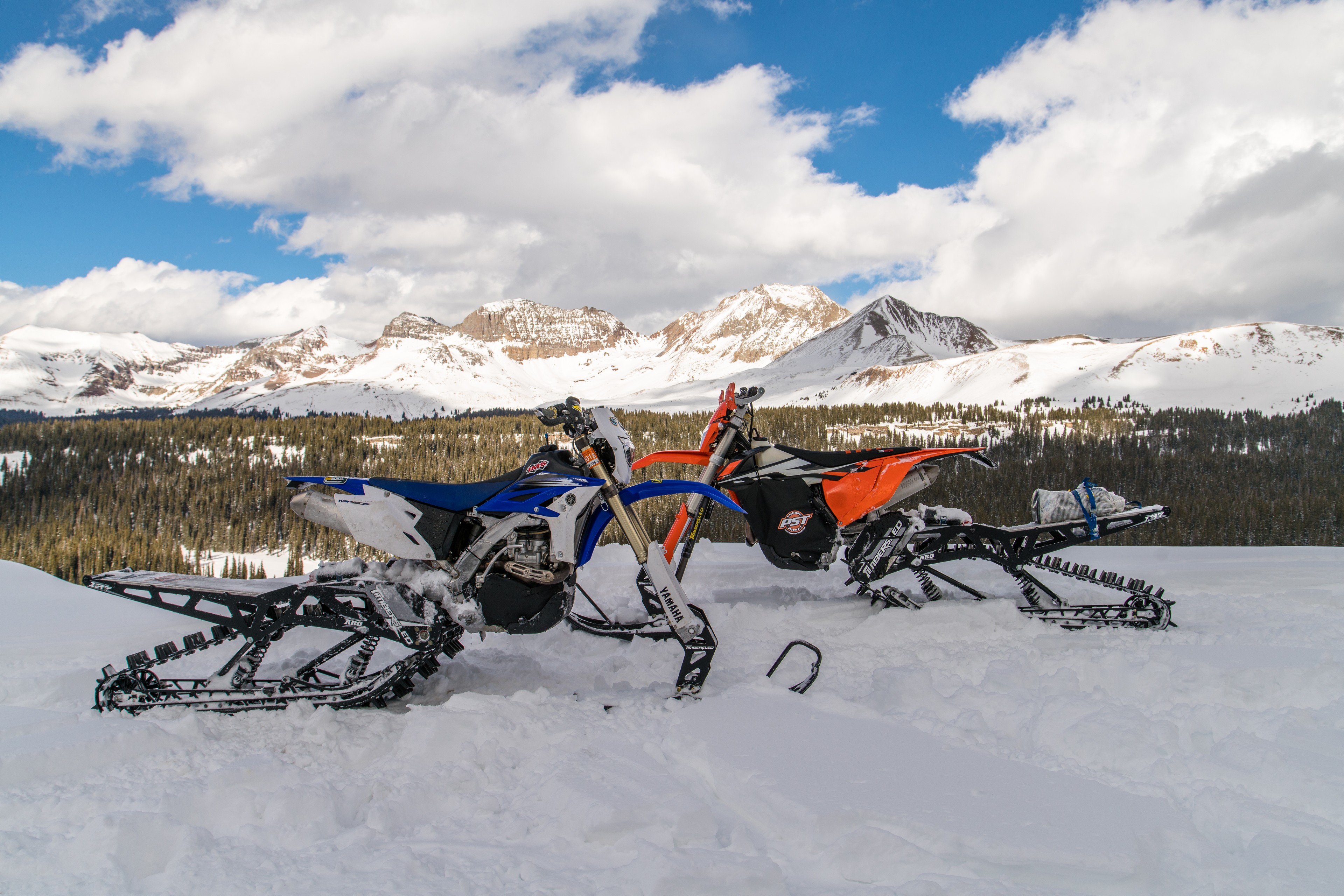 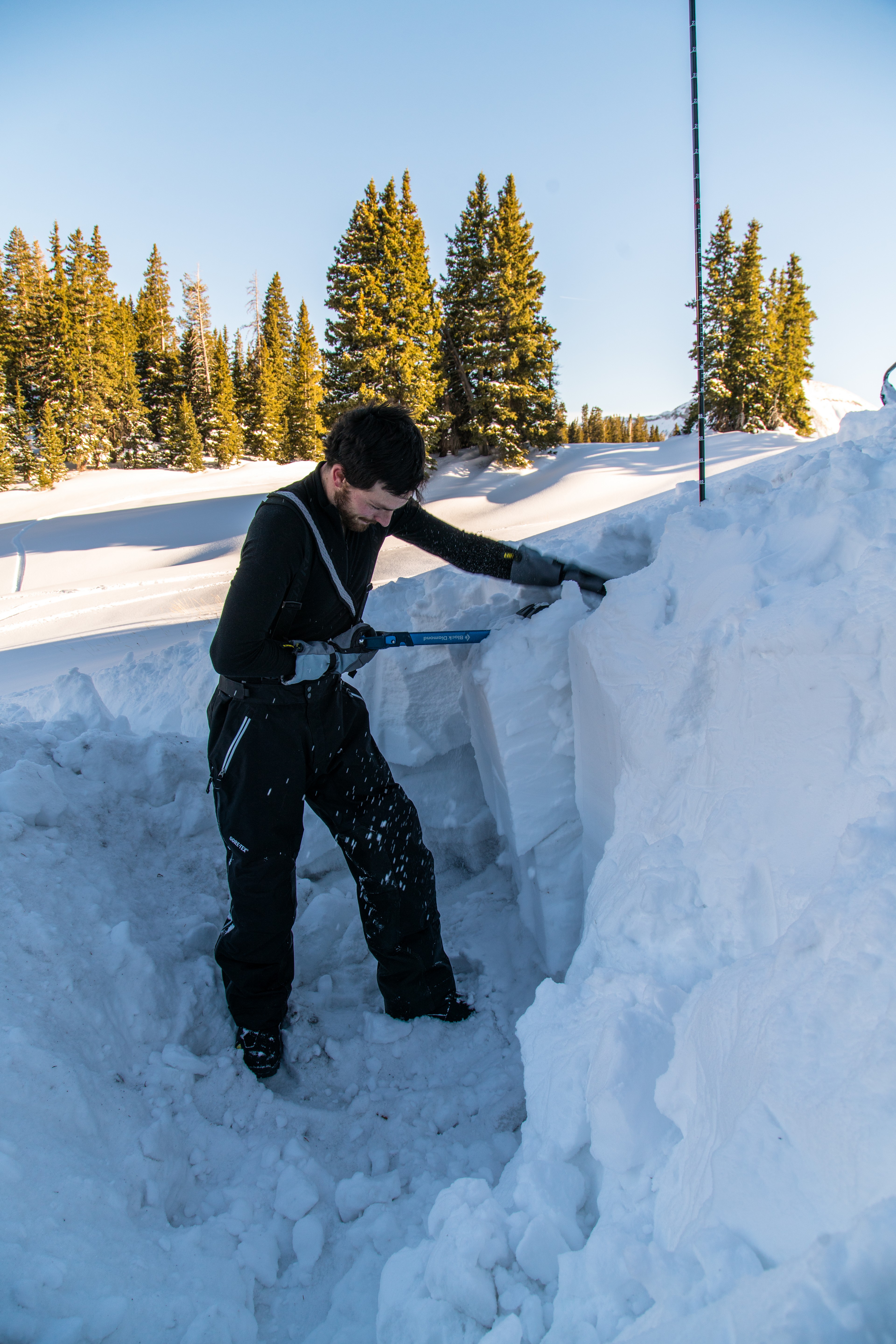 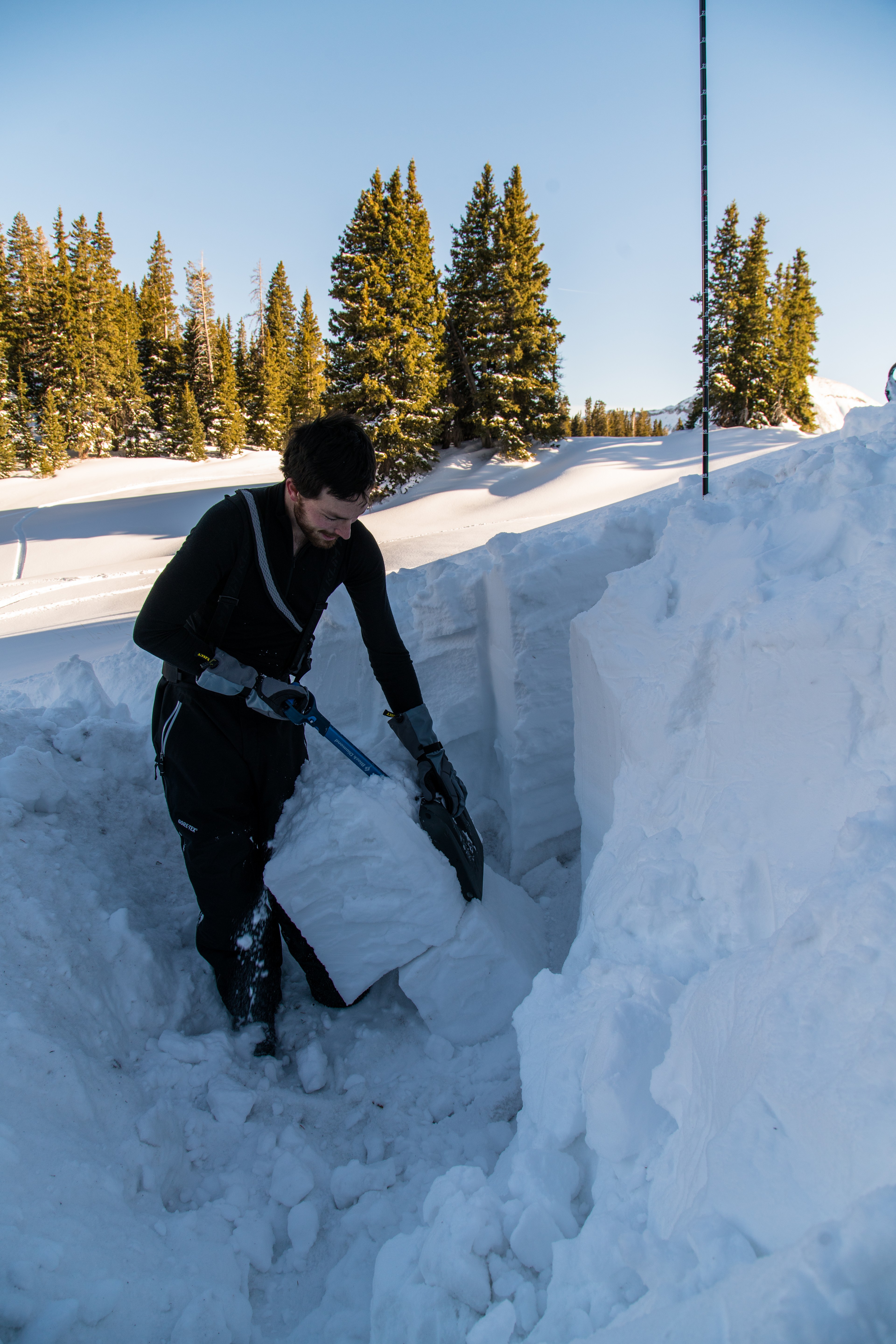 A level 1 class from the American Institute for Avalanche Research and Education (AIARE; pronounced air-ee) is an excellent way to learn about backcountry decision making, avalanche rescue, and avalanche terrain identification.  Level-one courses will have a classroom element and a field element so you can apply what you’ve learned in the classroom by analyzing real terrain and digging actual snow pits under the guidance of an instructor.  Snow pits allow you to see every layer in the snowpack and to gauge how stable the snowpack is with a number of different tests. 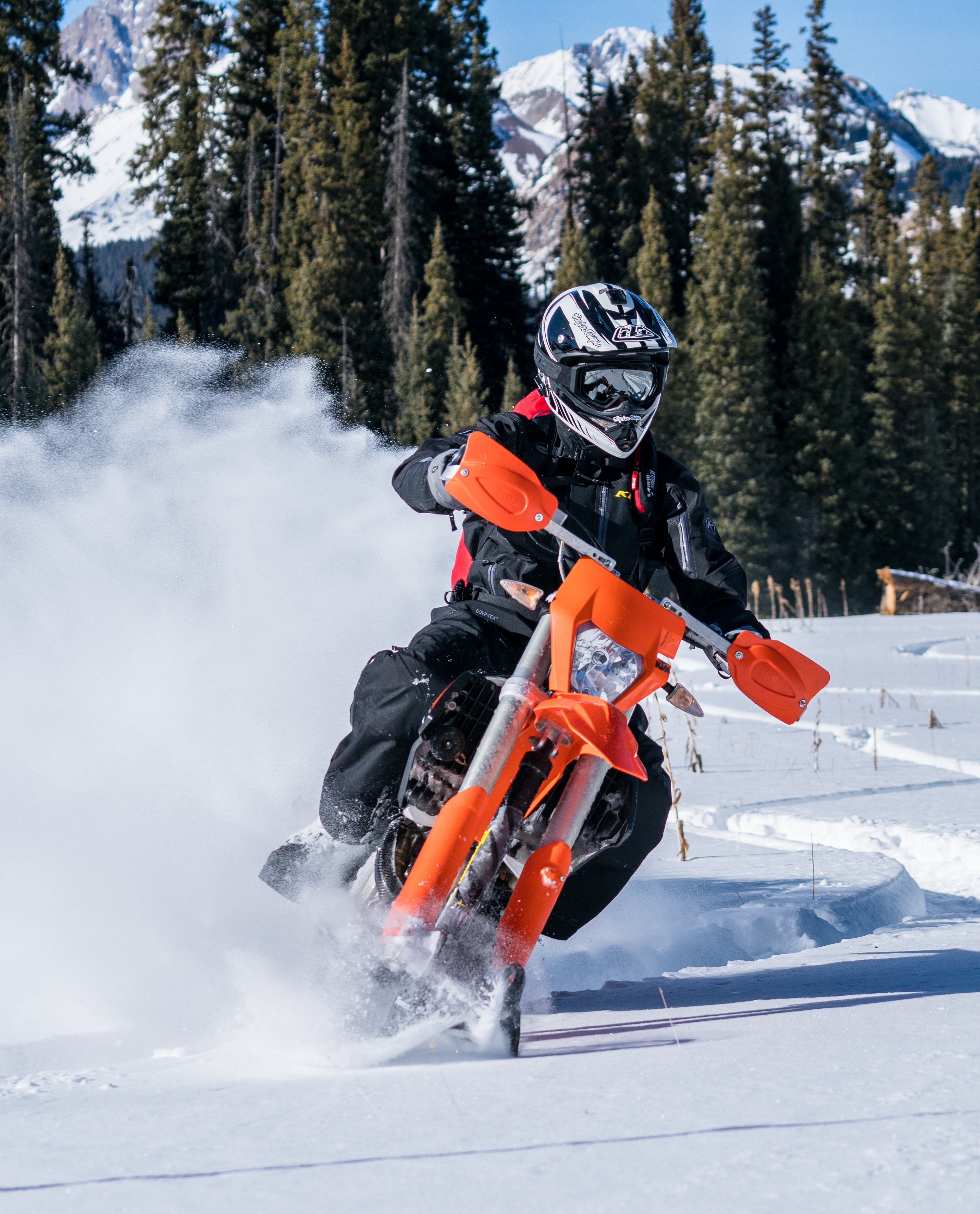 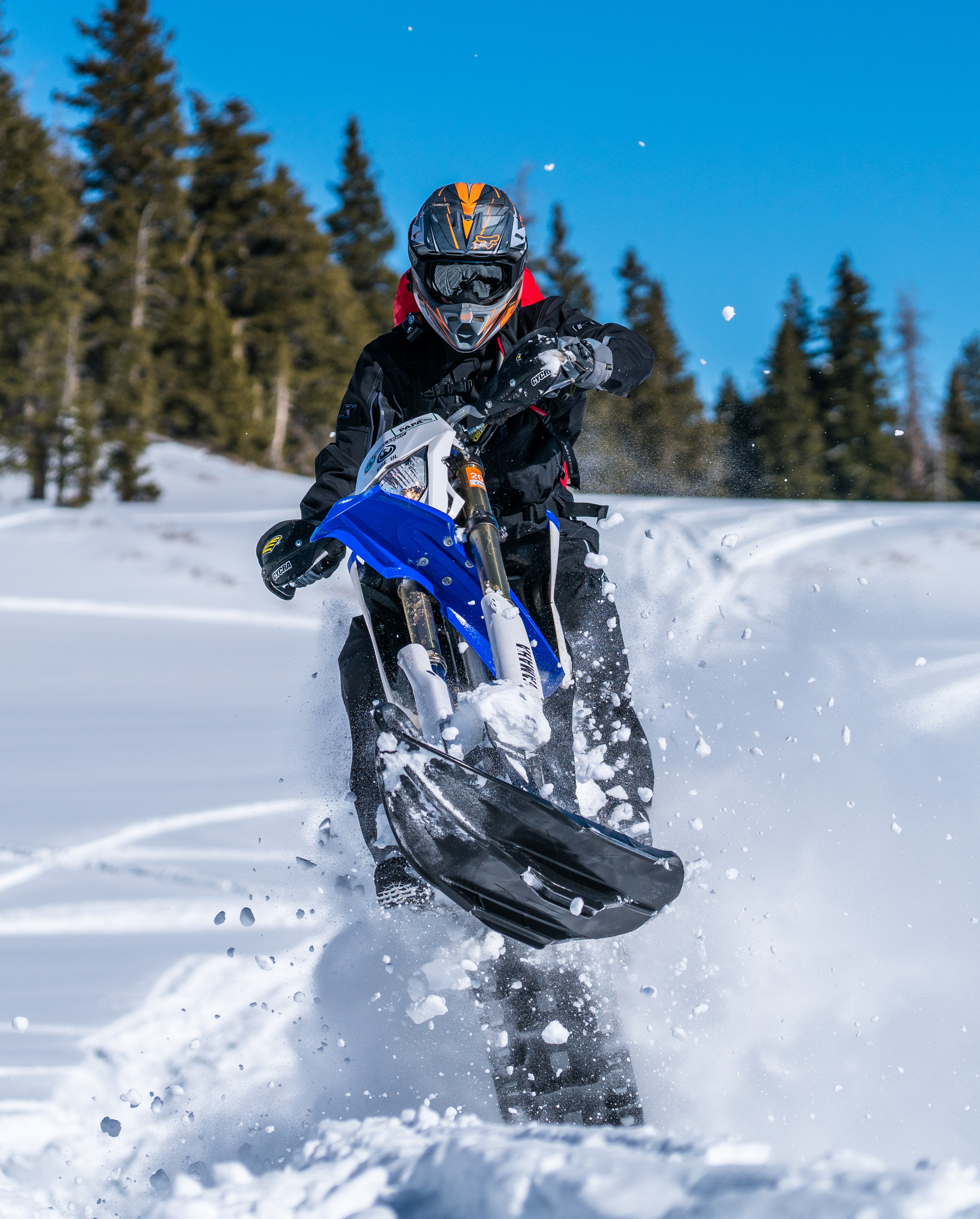 Another great resource exists with avalanche information centers, such as the Colorado Avalanche Information Center (CAIC) which provides weather and avalanche forecasts, snowpack discussions, and detailed reports whenever backcountry travelers are involved in an avalanche.  Consult Google or your local ski or snowmobile shops to find out where to get good avalanche information. 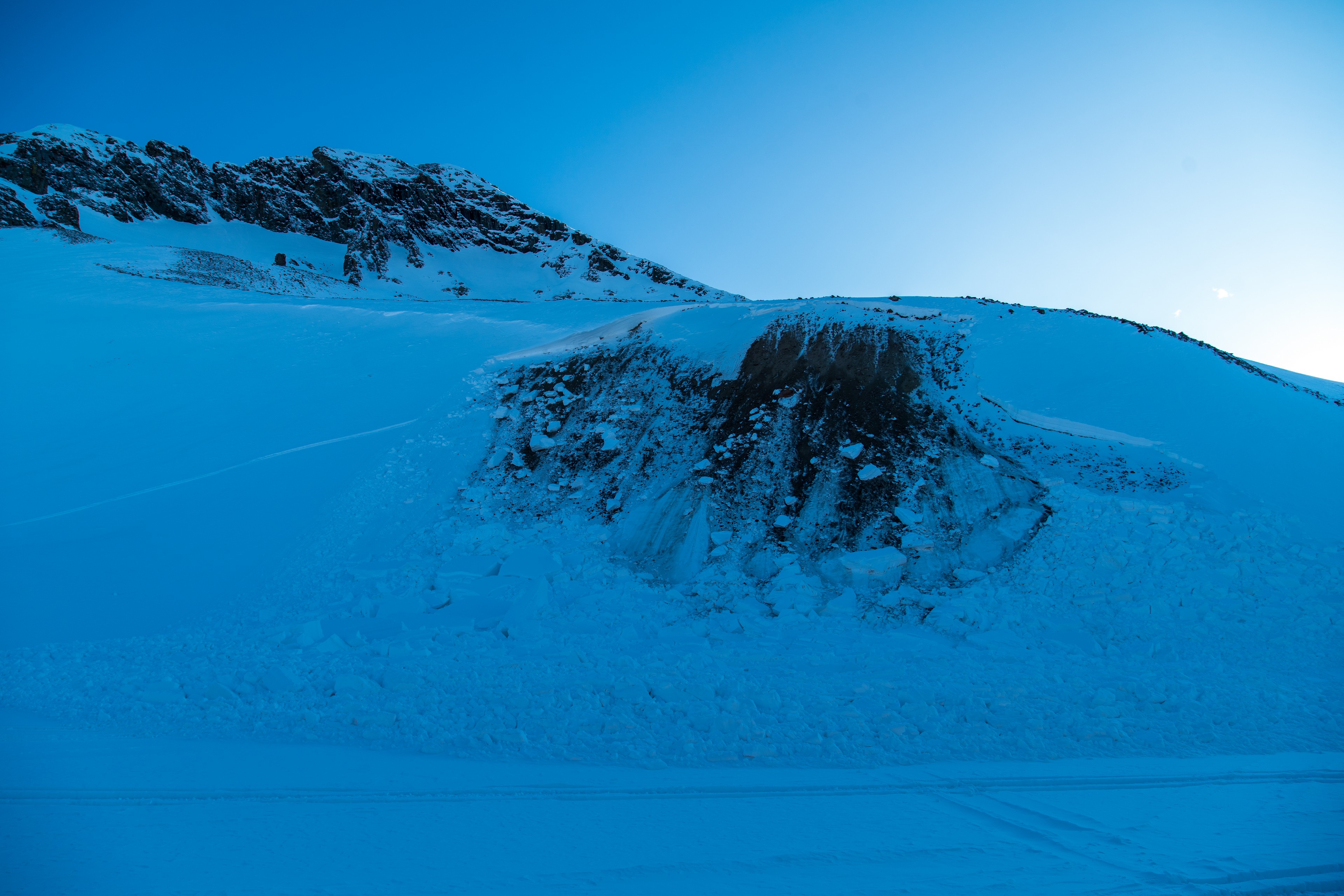 When you’re in the backcountry, pay attention to what’s going on around you.  The weather can change in an instant, and a calm bluebird day can turn into a blinding blizzard in minutes.  Keep an eye on which way the wind is blowing and how the wind may be scouring snow from one place and depositing it another.  Is the sun causing the snow to melt in certain areas (that will freeze at night) while shade is keeping other areas fresh and fluffy?  Snowpack can change significantly from aspect to aspect.  During a recent ride, we happened upon a perfect example of how wind-loading + shade + a bad snowpack had caused a really bad day for a snowmobiler. 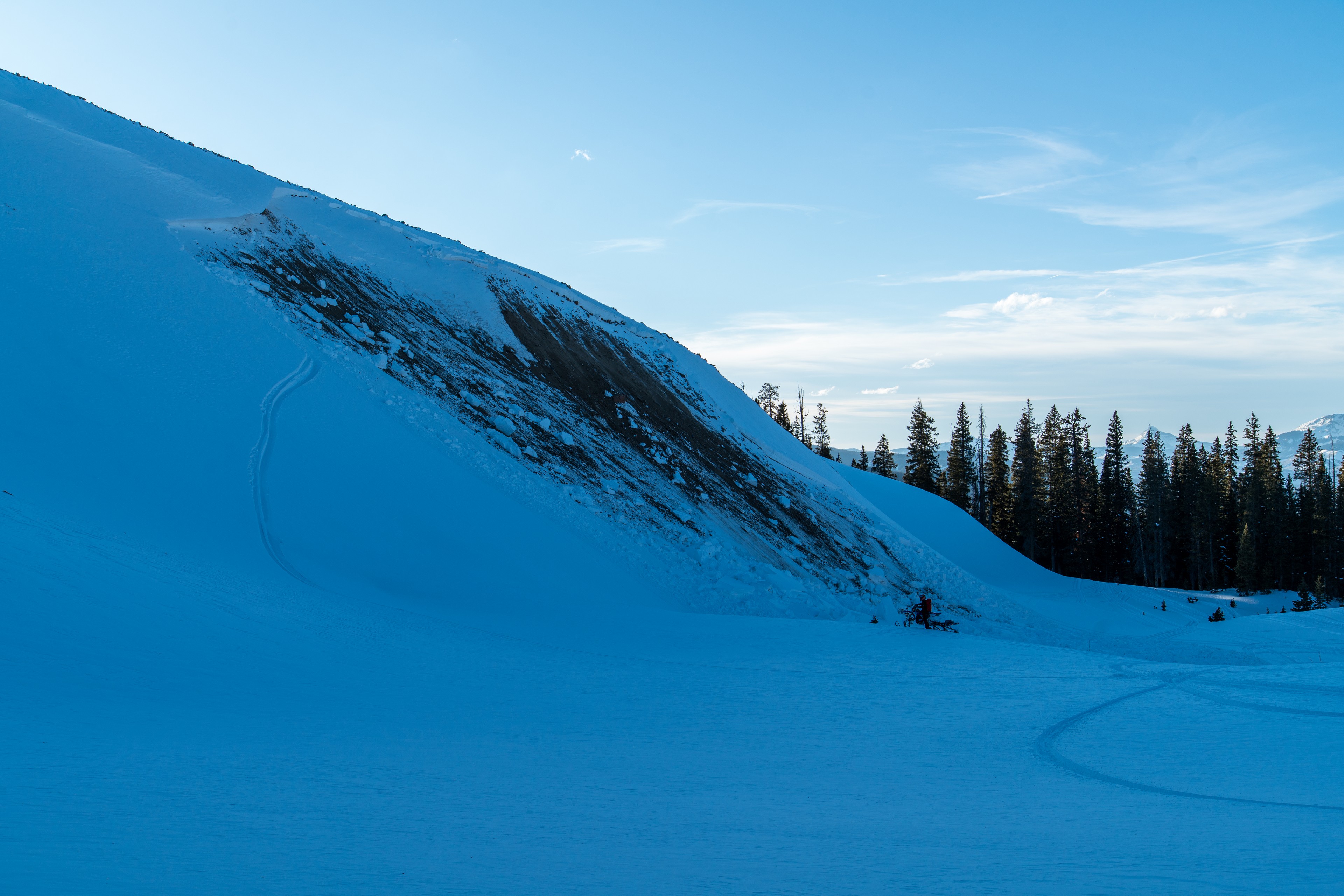 This slide happened where the wind loaded snow on a Northeast facing aspect that receives little sun.  The weight of all that additional snow brought in by the wind strained a weak snowpack (note the cornice on the top and the increase in thickness of the snowpack at the top of the slide, called the crown, at the top left). When a sled came ripping into what looked like a great untracked hill the snowpack let go.  Backcountry travel in avalanche terrain is a slow process, so take your time and make good terrain assessments.  YOLO around one time too many and you might not get to go home. 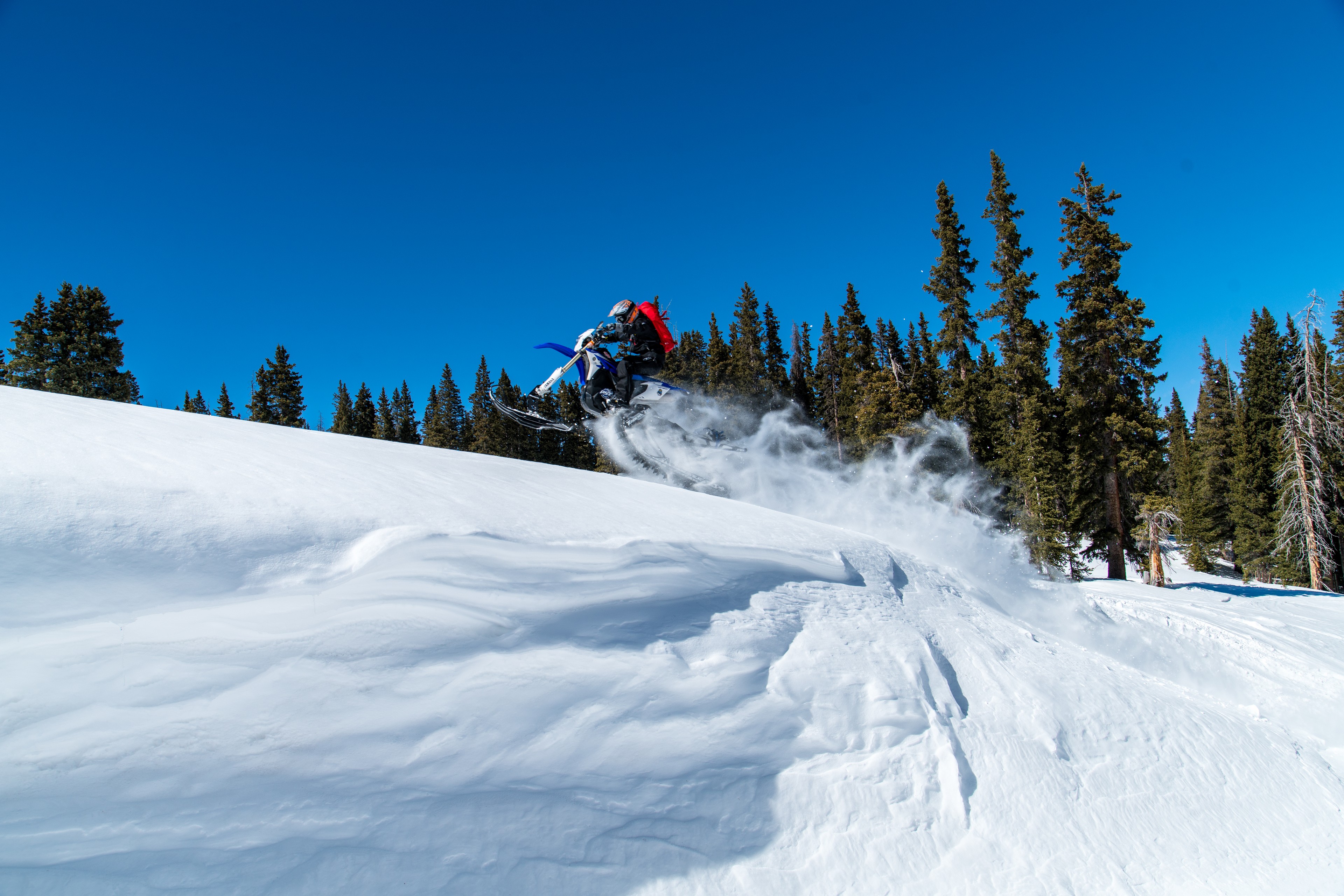 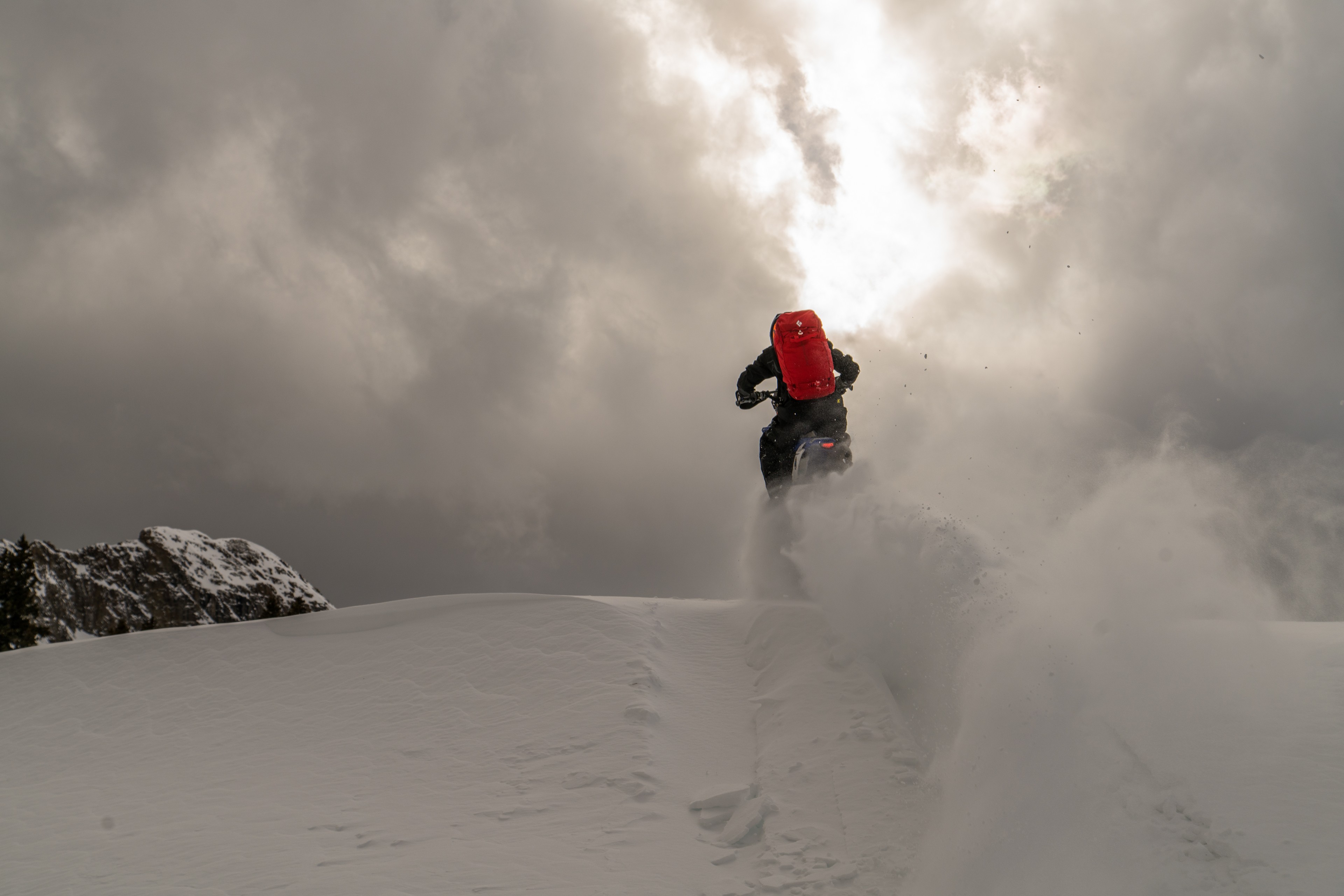 The same feature shot hours apart.  In the morning the weather was perfect bluebird calm, but the afternoon got quite stormy.

In the blink of an eye an awesome day in the backcountry can turn into a serious situation, which is why having good riding gear is so important.  It may be warm and sunny in the morning, but should an afternoon storm roll in, or worse yet, should you get delayed by several hours or worse (a mechanical or a really stuck snowbike), having gear that will keep you warm and dry is critical.  You may be totally comfortable with just a cotton hoody when the sun is out, but how will you stay warm if you end up having to spend a windy night in the backcountry? 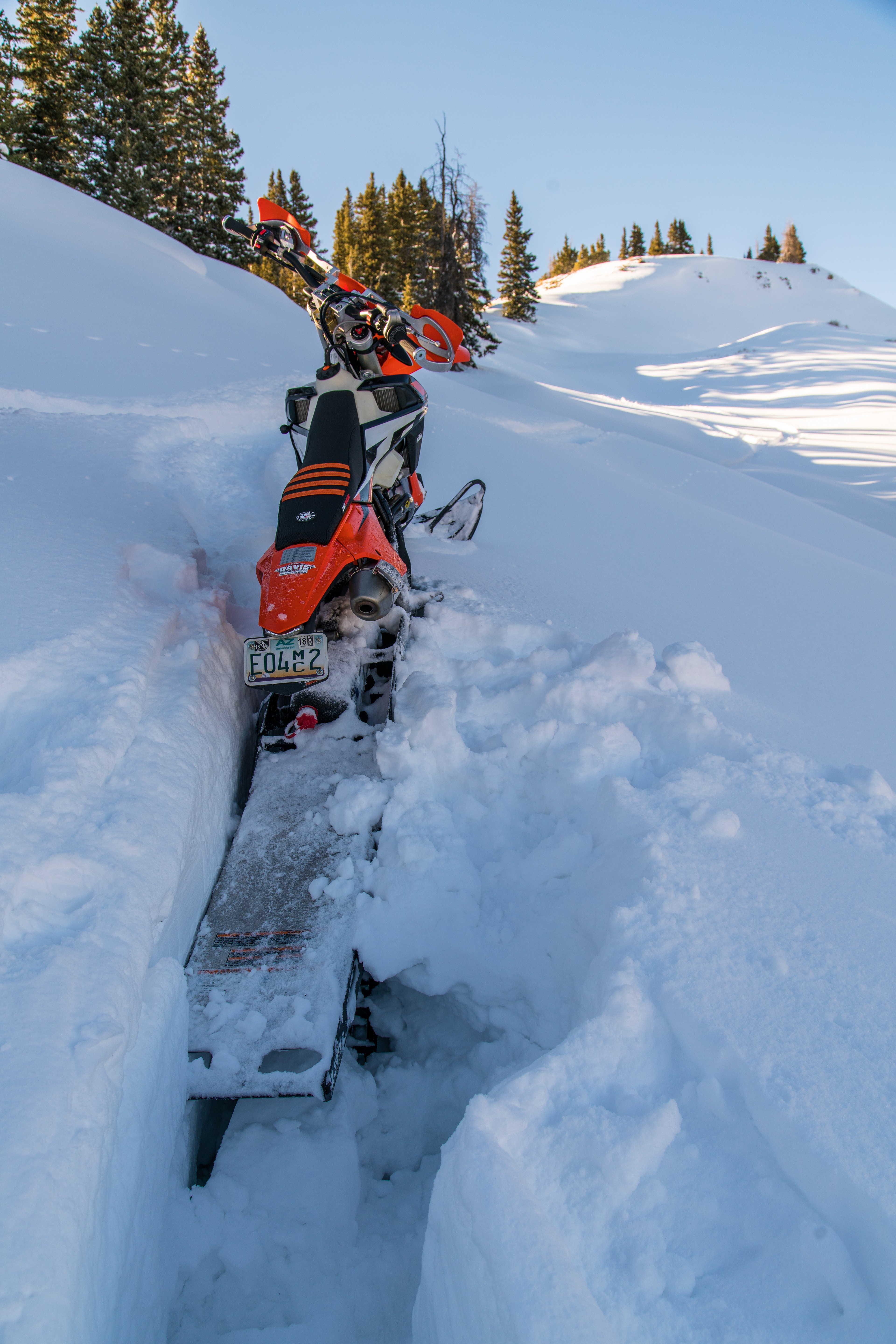 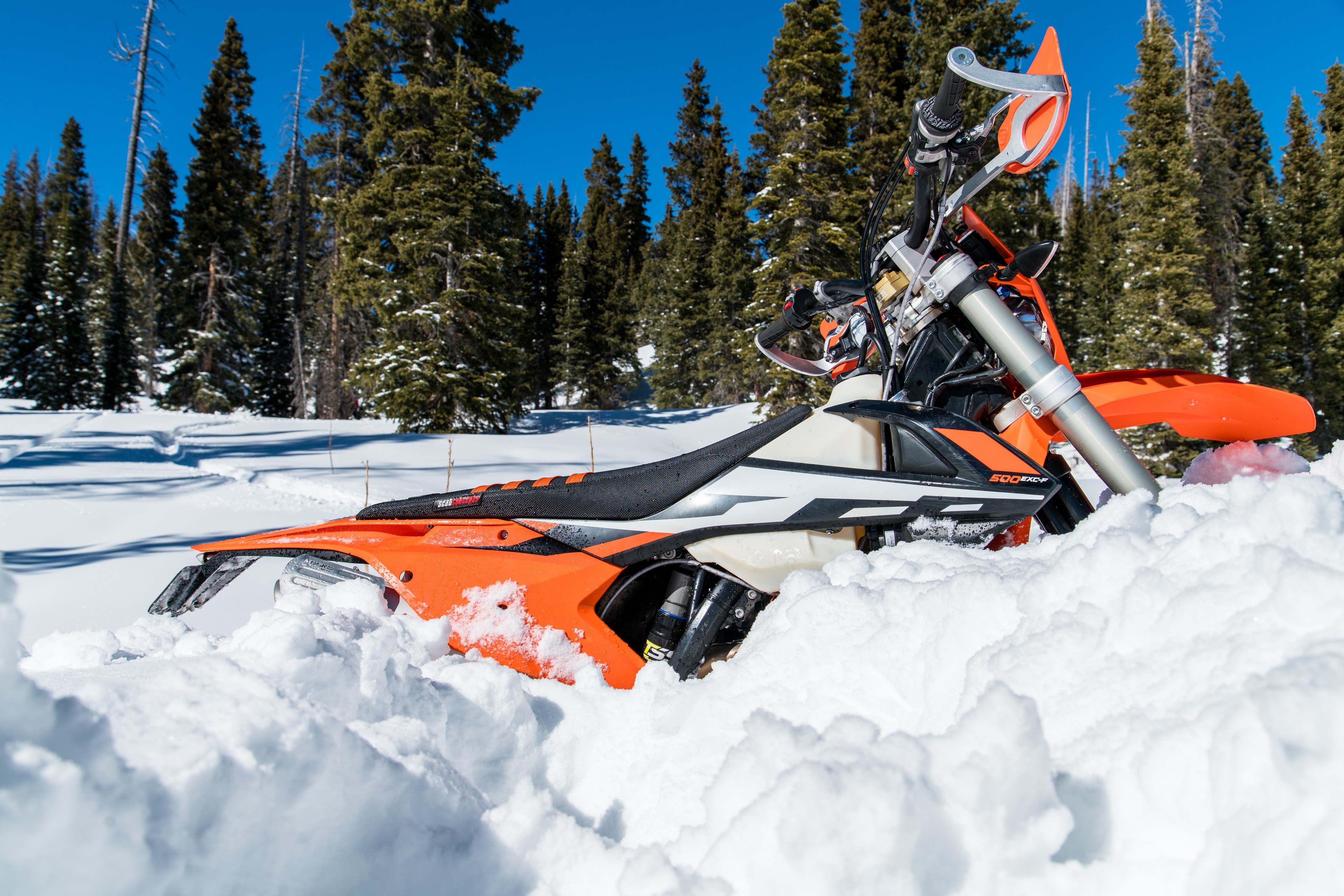 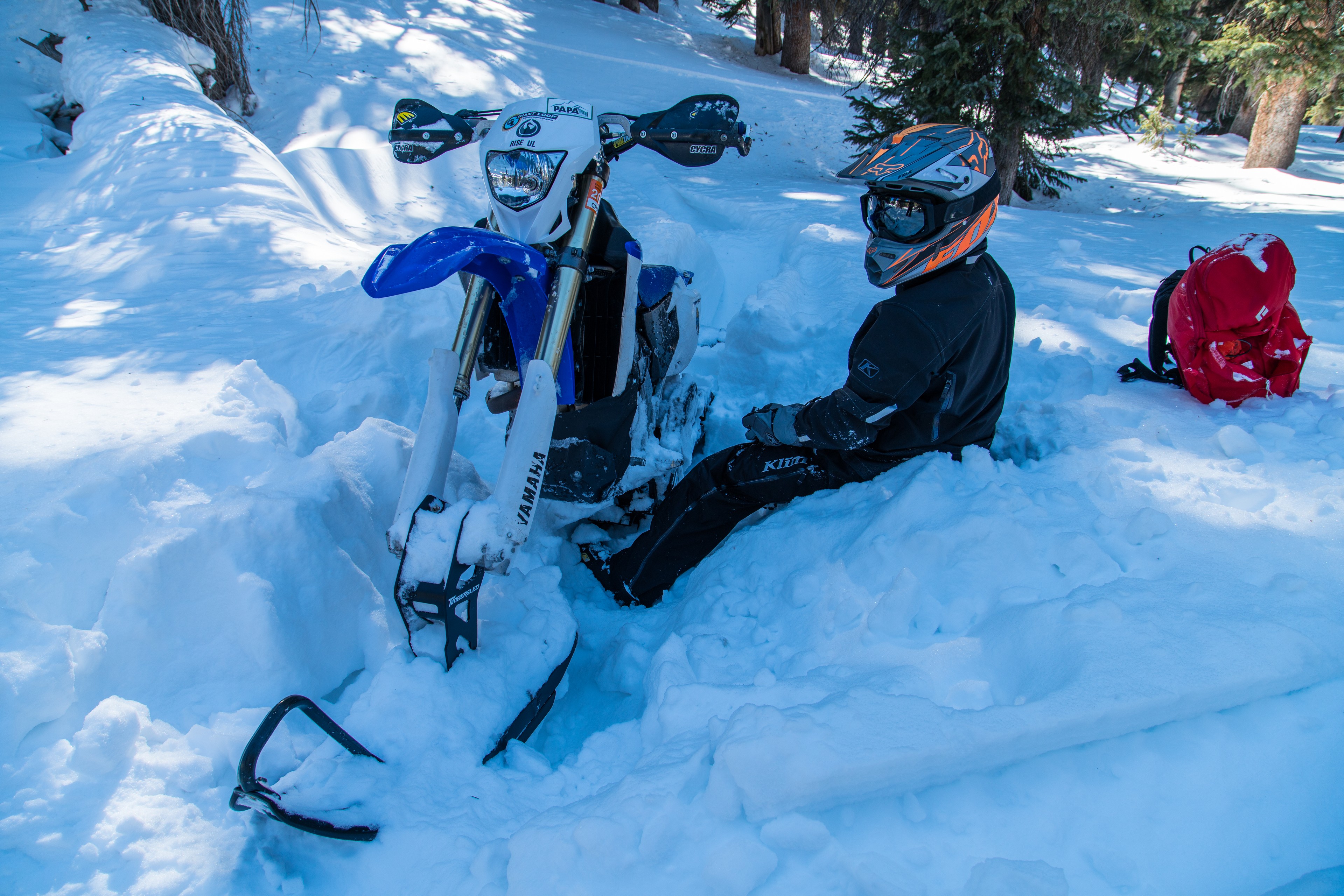 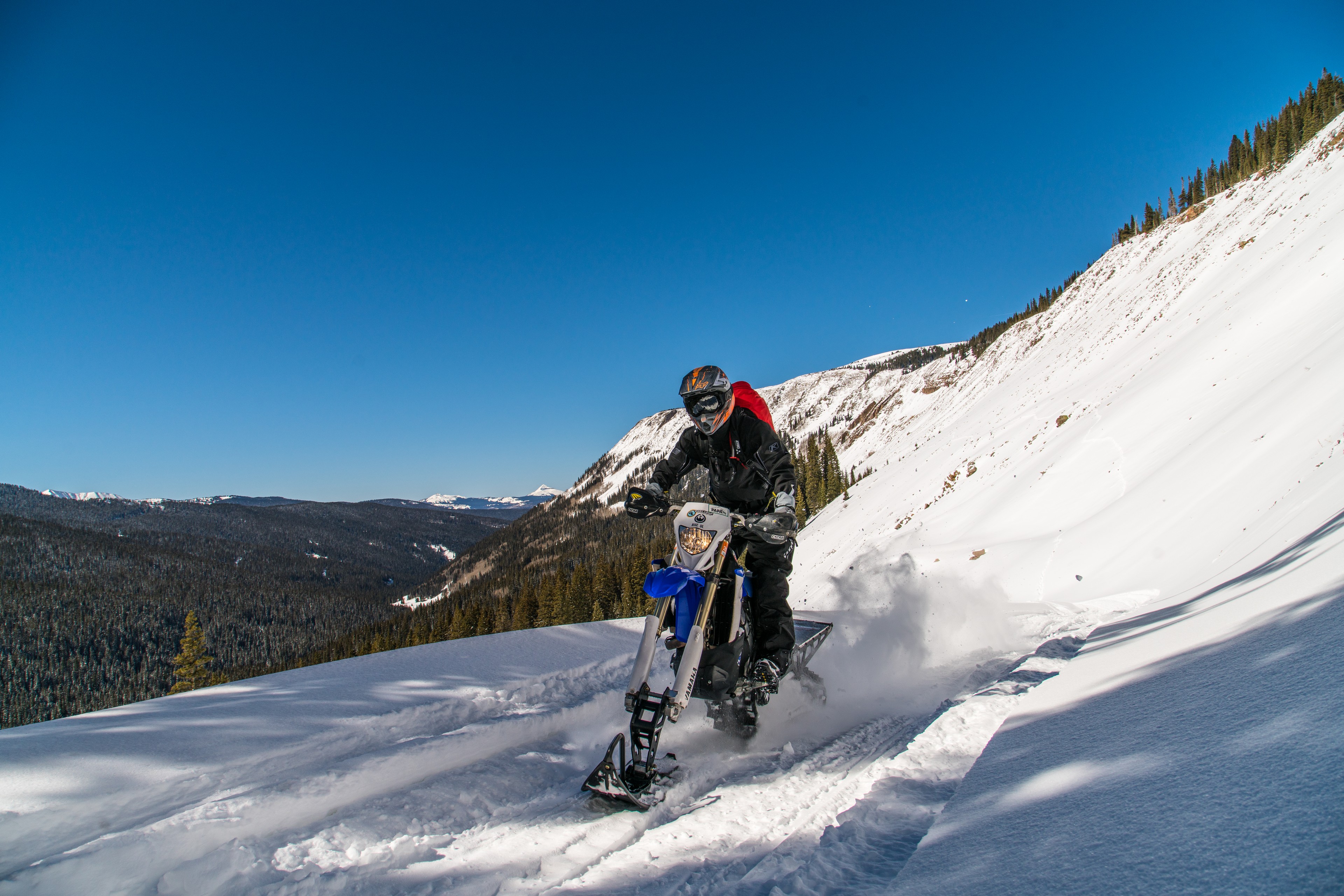 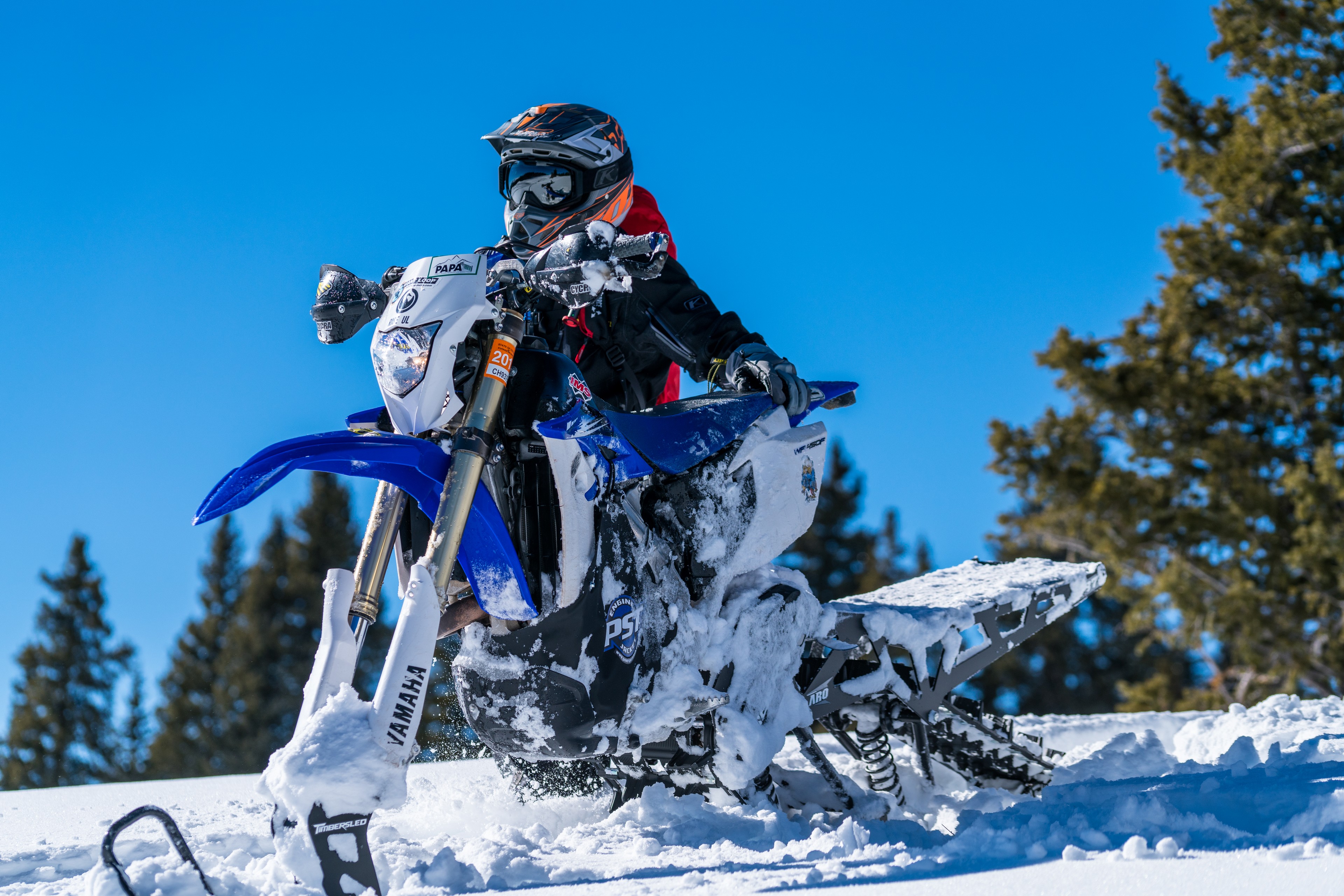 Klim’s Valdez parka and Havoc bibs have extensive venting that can be opened up when conditions call for just that cotton hoody, and when it gets cold and nasty these two pieces can be closed up becoming a veritable waterproof shield that can be layered over all the insulation layers you need.  The Togwotee gloves can be run as a shell in warmer temperatures, or used with the included fleece liner when the weather gets cold.  Likewise, the Adrenaline GTX BOA boots worked so well that we didn’t notice them, because our feet were just that comfortable.  From standing on the pegs to hiking exposed rocky ridge lines, these boots worked great.  Rounding out this excellent riding gear setup are the Oculus googles that provided fog-free performance 100% of the time we were riding.  Yes, good gear costs more, but when it comes down to it, I’ll gladly pay more to know that I’ll be warm and dry, no matter what the weather decides to do.  Cold, wet, and several hours from the truck is a special kind of miserable.  Do yourself a favor and buy good gear the first time around—that way you can get out and enjoy more days in a season instead of having to wait for those warm and sunny days. 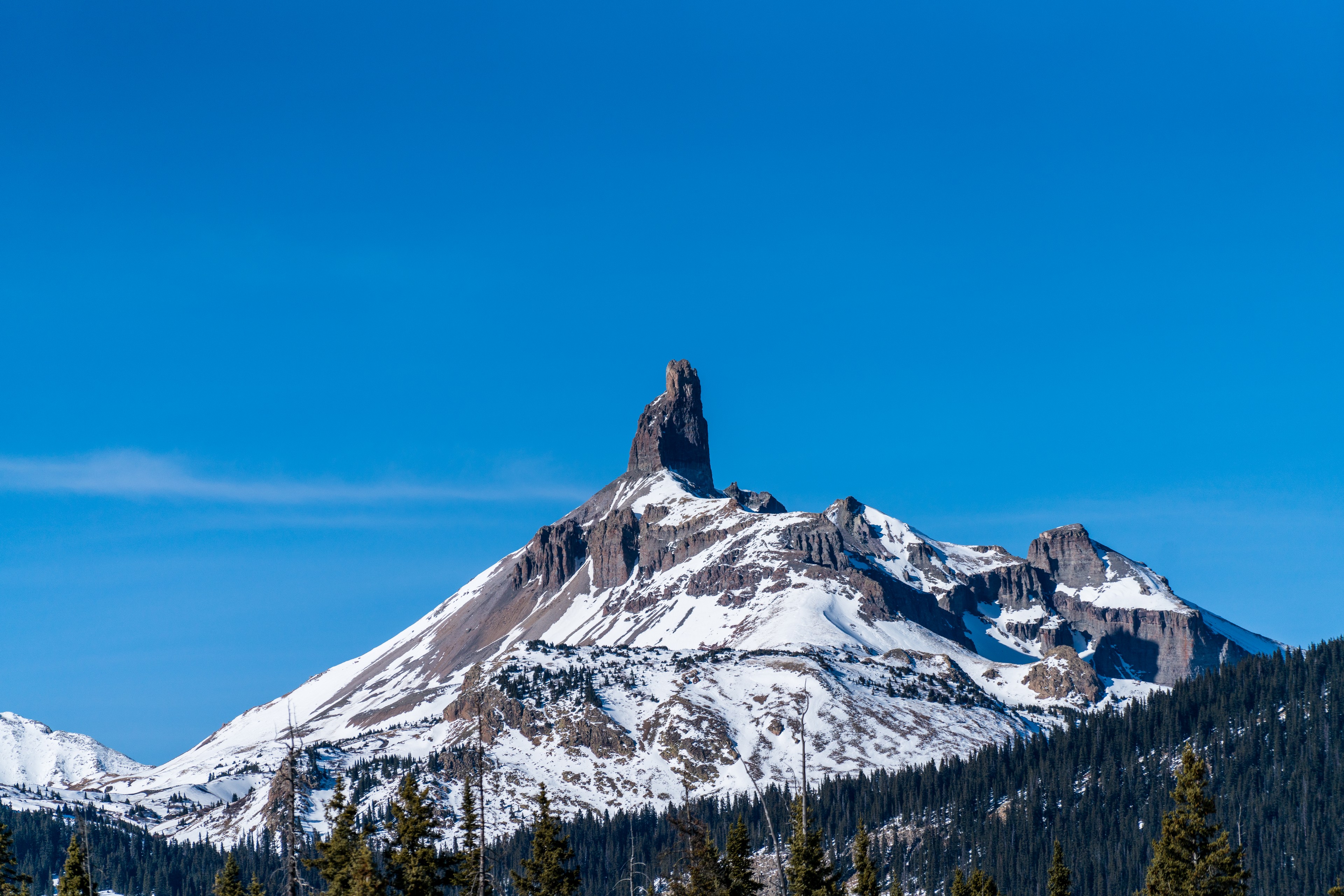 Timbersleds are amazing machines that will have you saying “worth it” minutes after you first get on one.  Their ability to easily access terrain that has traditionally been the realm of expert backcountry snowmobilers and backcountry travelers means that more riders are heading into avalanche terrain who may not have the proper gear and training.  So please, get proper avalanche gear and good riding gear.  Take an Avalanche class.  Go dig pits and do practice beacon searches.  Read the reports and forecasts from your local avalanche center.  Pay attention to what the world is doing around you when you’re out there, and realize that some days, it may just be a better call to go ski in bounds at the resort.  Most importantly, when you’re out there enjoy every minute of it—because powder days never last long enough. 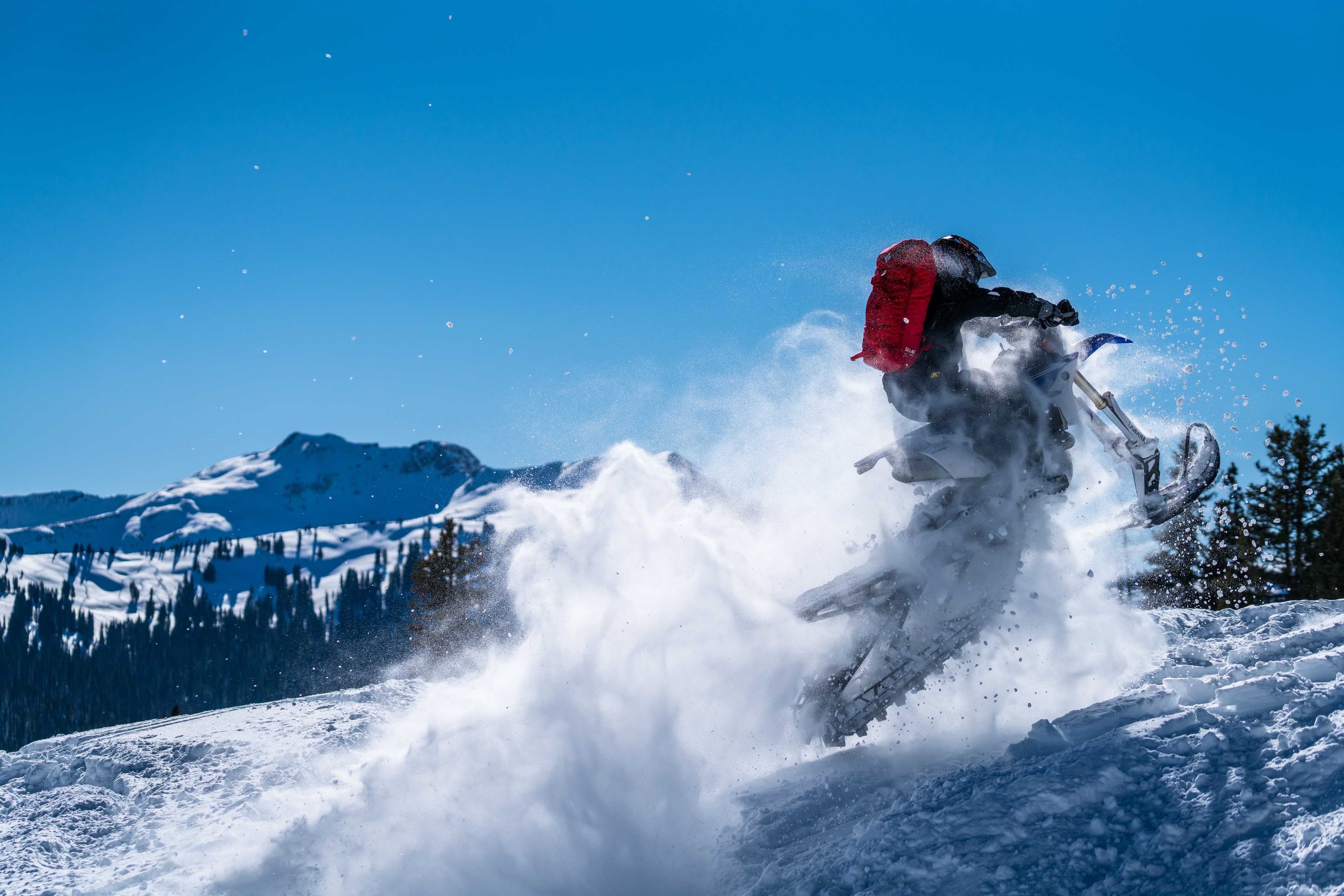 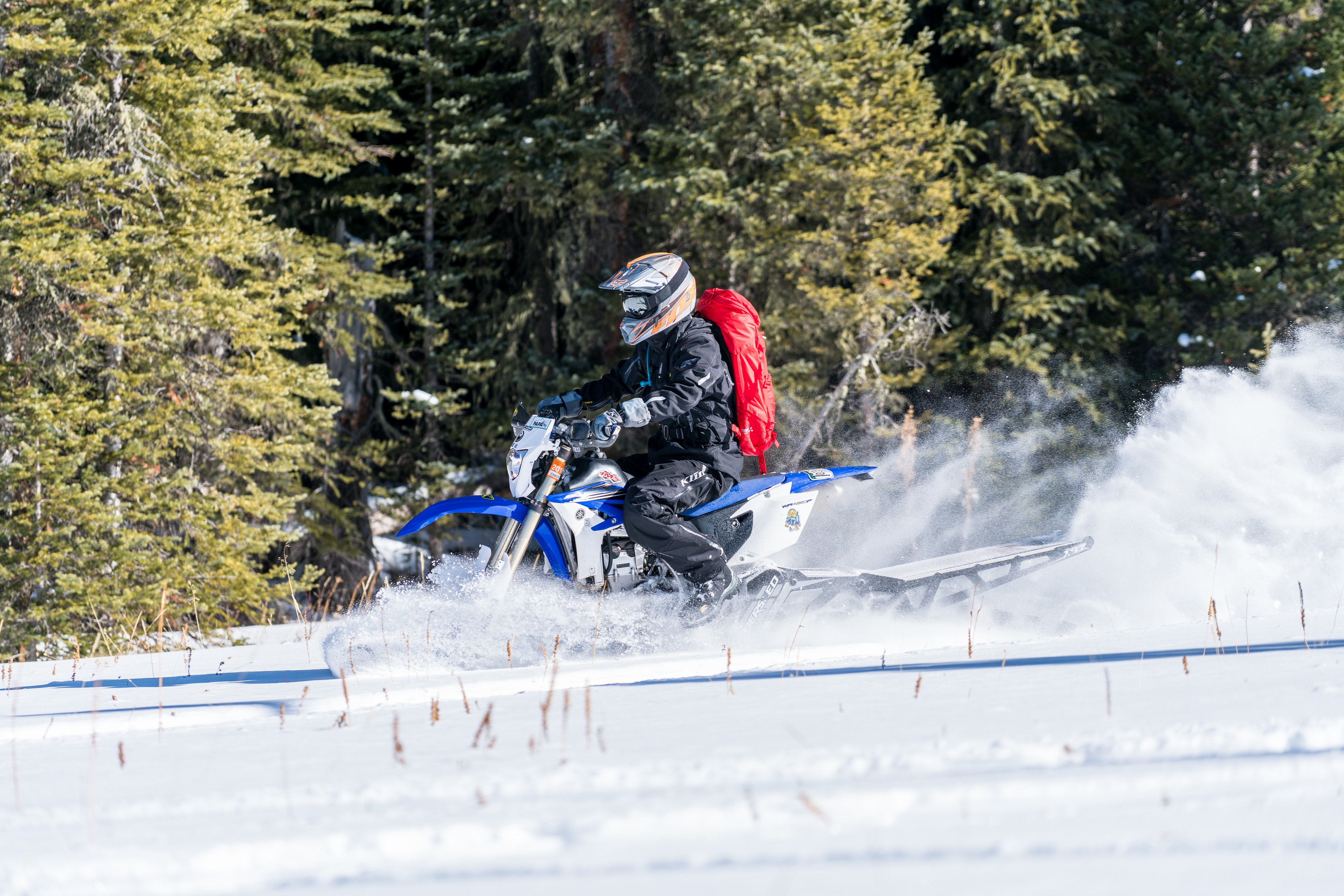 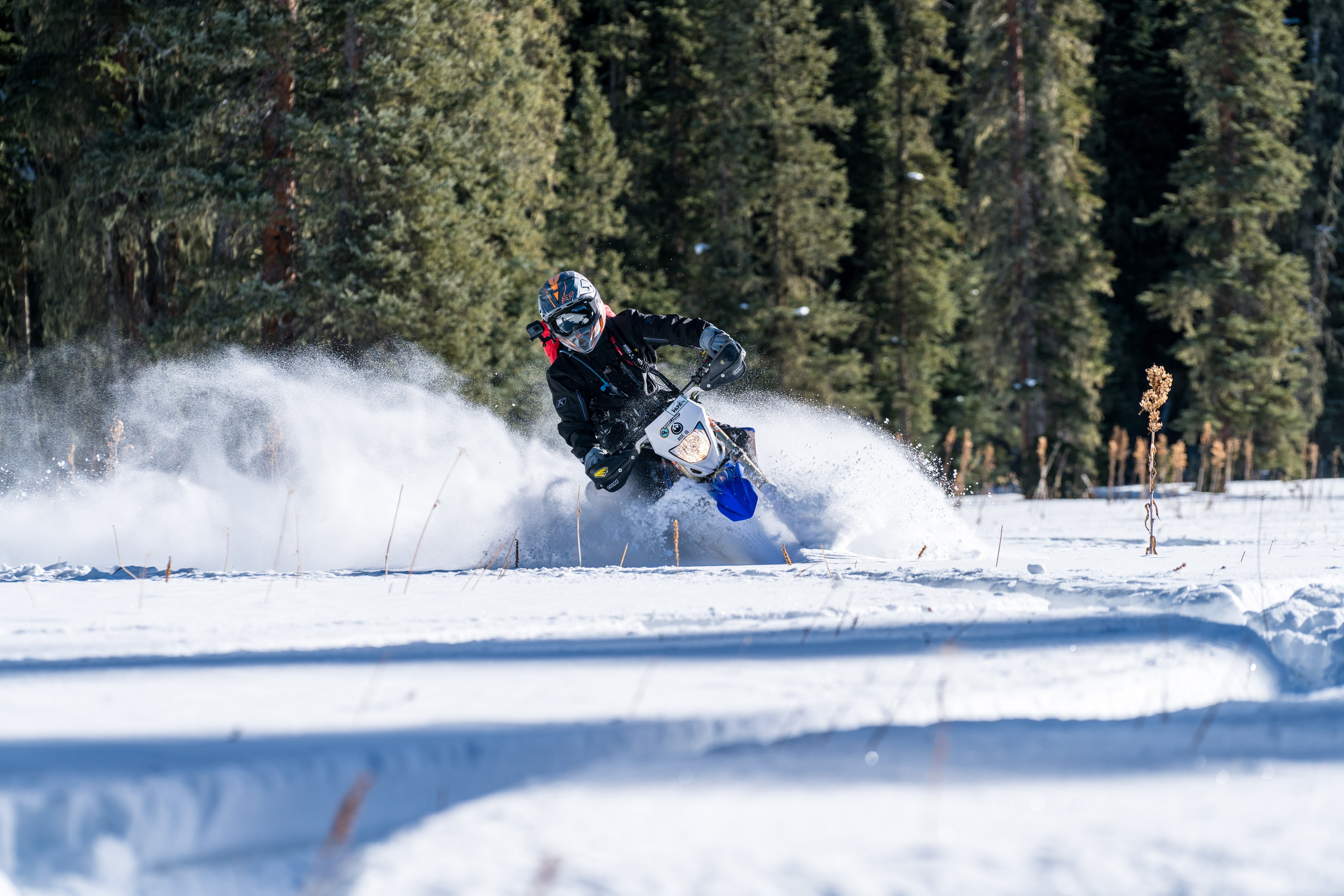