Overland Expo West 2019 may have just ended, but here at American Adventurist we’re already looking forward to Overland Expo East 2019 and beyond.  That’s because Overland Expo continues to be an event that raises the bar year by year with more and more awesome people, new gear, and epic vehicles.  The big news of course is that Overland Expo turned ten in 2019, and after nine years of cultivating an outstanding global event, Jonathan and Roseann Hanson have passed the torch over to Lodestone Events.

At the time of this writing, feedback has been extremely positive on the new management which is a huge feat in and of itself considering the cult following surrounding this event.

By the numbers, this tenth birthday was by far the biggest Overland Expo event yet with over 22,000 people attending to check out the more than 400 exhibitors, 1,500 adventure vehicles, and 330 classes.  In other words, Overland Expo just continues to grow with no plateau in sight– and things are only looking up from here.  Based on the number of new faces and vendors we saw at this year’s event, there are obviously a great deal of people who are getting the appeal of this overlanding thing that we love so much.

This year, Flagstaff did a great job of showing why the locals say “If you don’t like the weather, just wait five minutes”, and I’m pretty sure someone out there has already started calling OXW19 Snowblowverlandchanceofrainandsomesun Expo.  We’ve had Blowverland Expo and Snowverland Expo, and now we’ve had Just a Little Bit of Everything Expo – but even with the changing weather, the show was still awesome, and thoroughly enjoyed by so many people – so lets dig in to the photos, because we all know no one really reads these articles anywho.

Speaking of photos, BIG thanks to Richard Soohoo for all of the amazing photos here. He worked very hard to help cover everything for you!

Fort Tuthill County Fairground was packed full of Overland-Awesome for the event.  Well planned changes in layout from last year provided a larger continuous vendor area, and a nice new skills area which were huge hits with old hands and first-timers alike. There was definitely a more centralized feel to the venue this year. 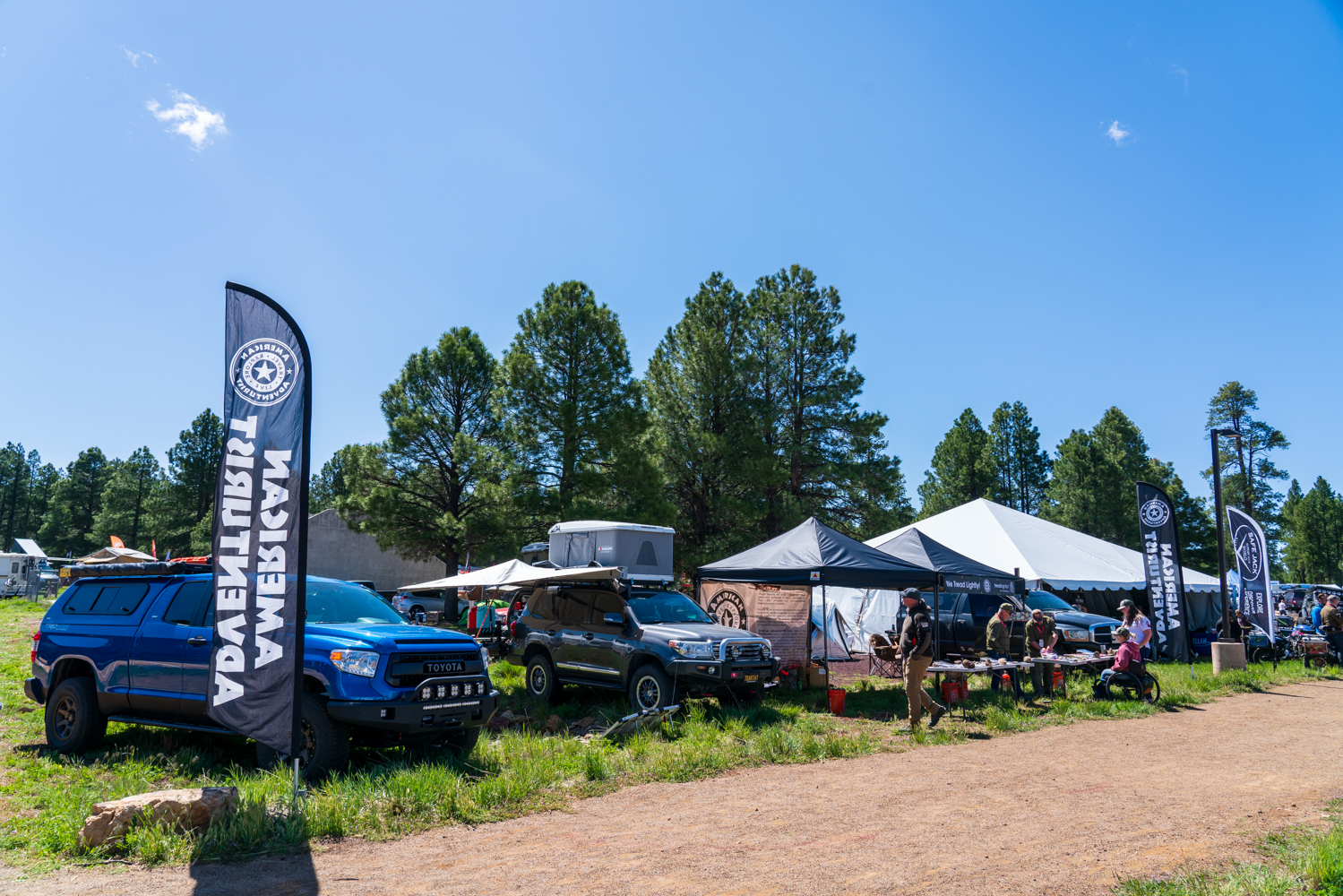 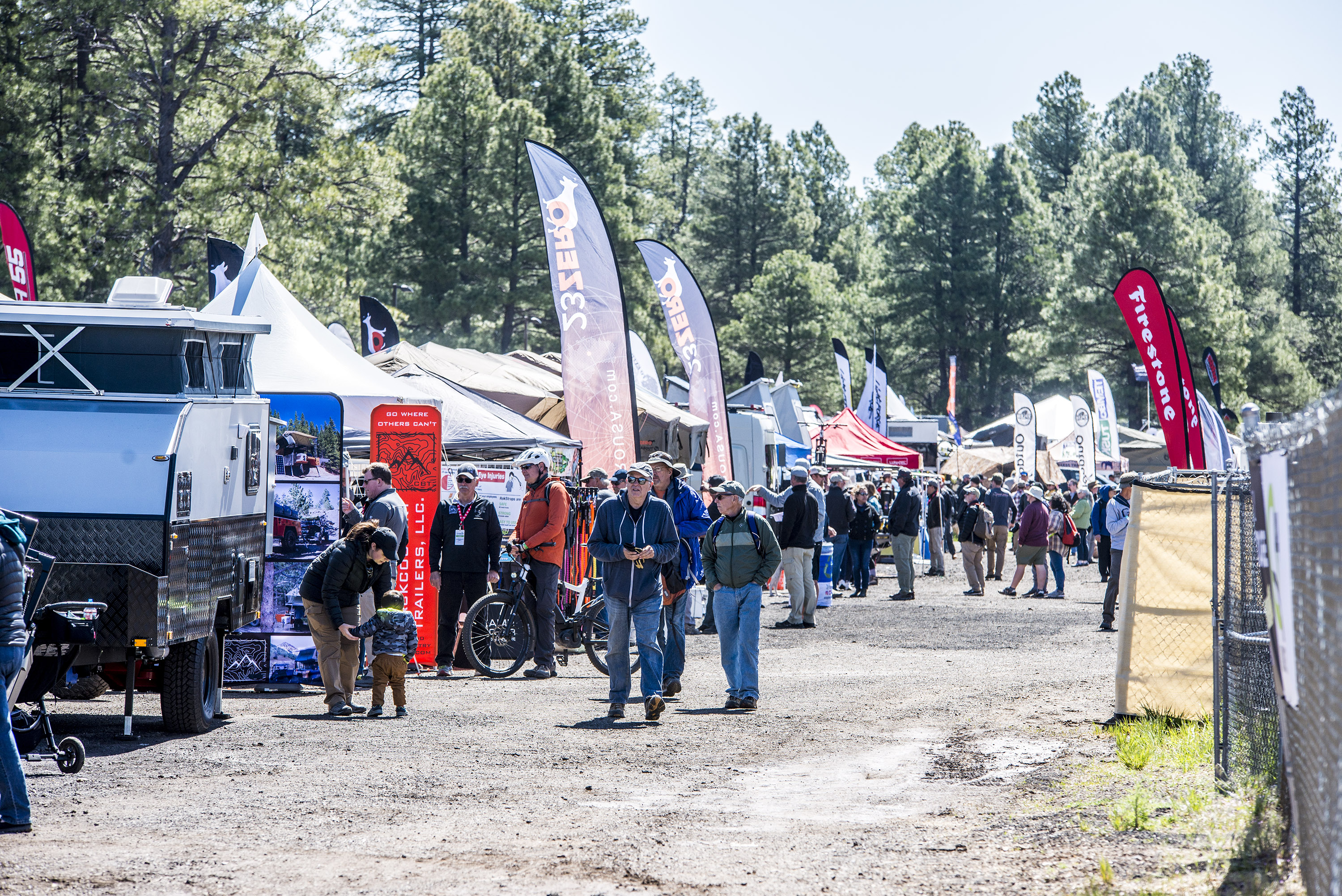 Overland Expo is the place where you can learn anything that relates to the skills you need to adventure and travel.  With over 450 session-hours of instruction at this year’s event, there was no shortage of expert mentors and new things to be learned.  From classes on obvious topics like first-aid and vehicle recovery to more advanced topics like international fly-and drive-trips and how to not end up in jail at border crossings, Overland Expo assembles some of the best subject matter experts on the planet to teach you what you need to know before you go. 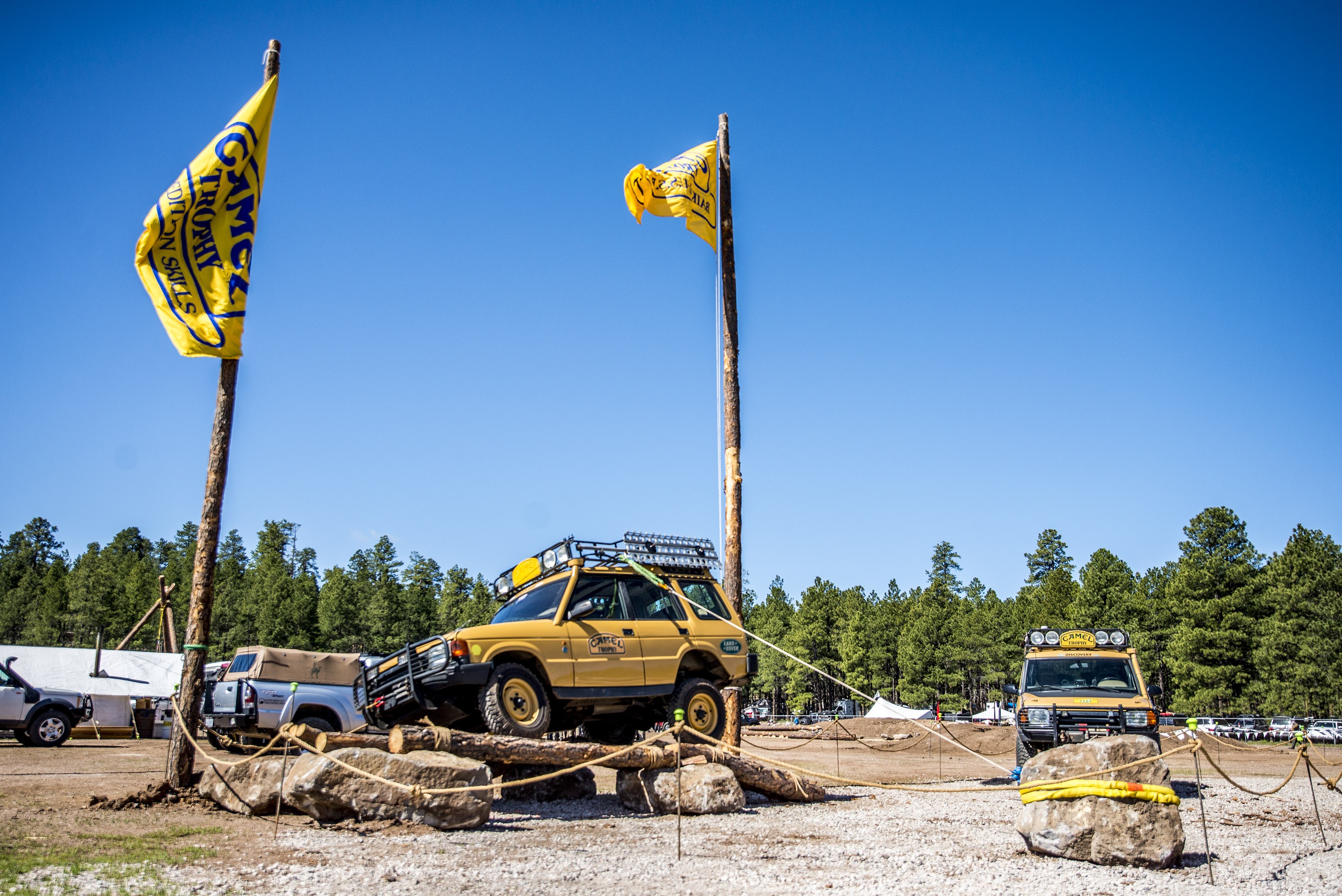 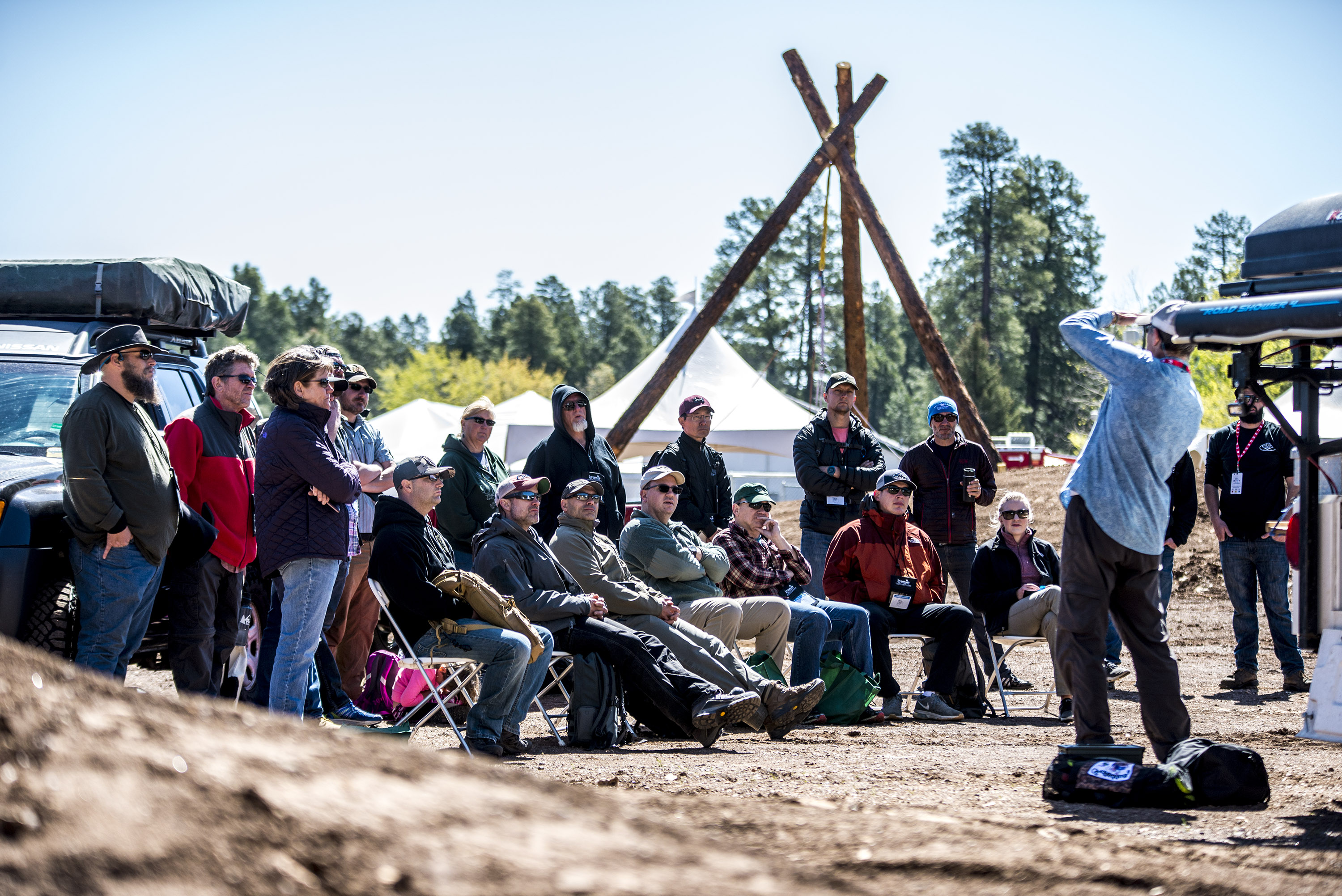 One of my favorite things about Overland Expo are the rigs that come to the event each year.  From Sherps to the Rivian R1T electric truck, to monster military trucks to scramblers and Honda Trail 90’s, there’s something here on two wheels, four wheels, or more than four wheels to blow any enthusiast’s hair back.  OEMs, complete vehicle builders, one-offs and plenty of company vehicles compliment the assortment of awesome DIY rigs on display.  More than once, I’ve found inspiration for one of my vehicles from a vehicle on display at Overland Expo.

There’s so much awesome gear on display at Overland Expo.  From well established names in the industry to small companies just getting started, there are so many cool things to see.  This is where new ideas see the light of day for the first time, and little projects become big sellers.  Here’s just a small sampling of the awesome newness that was on display.

Goose Gear will soon be importing these awesome, German-made 50TEN modules.  We can’t wait to see one of these fully built out with their interior know-how.

The Poolahoop keeps your bog roll exactly where you need it when you’re answering the call.  This isn’t a new product, but we love the display and seeing people’s reactions to a mannequin on a can.  Check out Hinterland Industries to get your own Poolahoop. 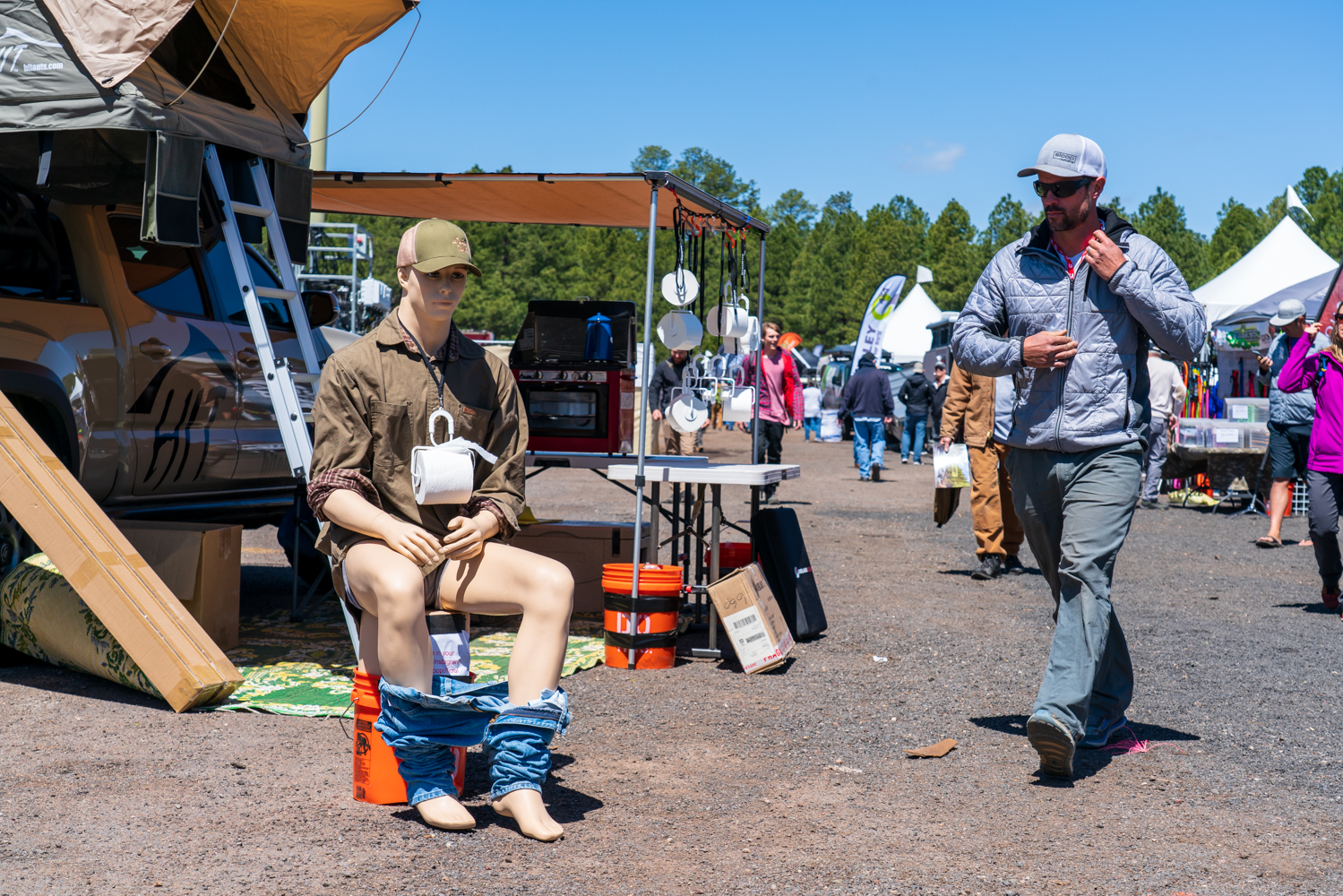 Dogs on motos is a thing, and Rex Specs makes a whole line of goggle sizes for your furry, four legged adventure buddy. 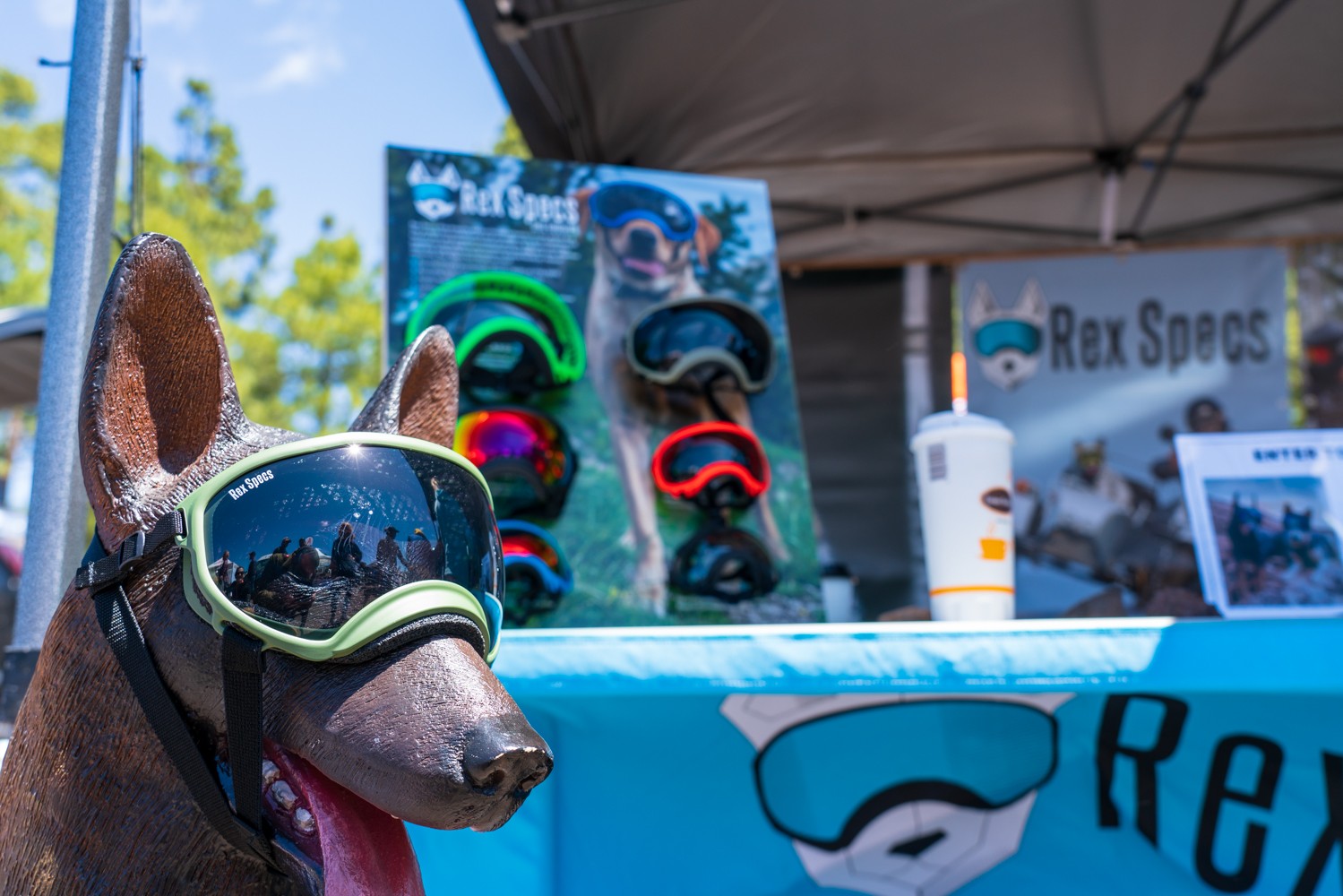 Pack rafts are an awesome way to add a new waterborne option to your overland travels.  Hike in and raft out.  Check out Kokopelli Rafts for more. 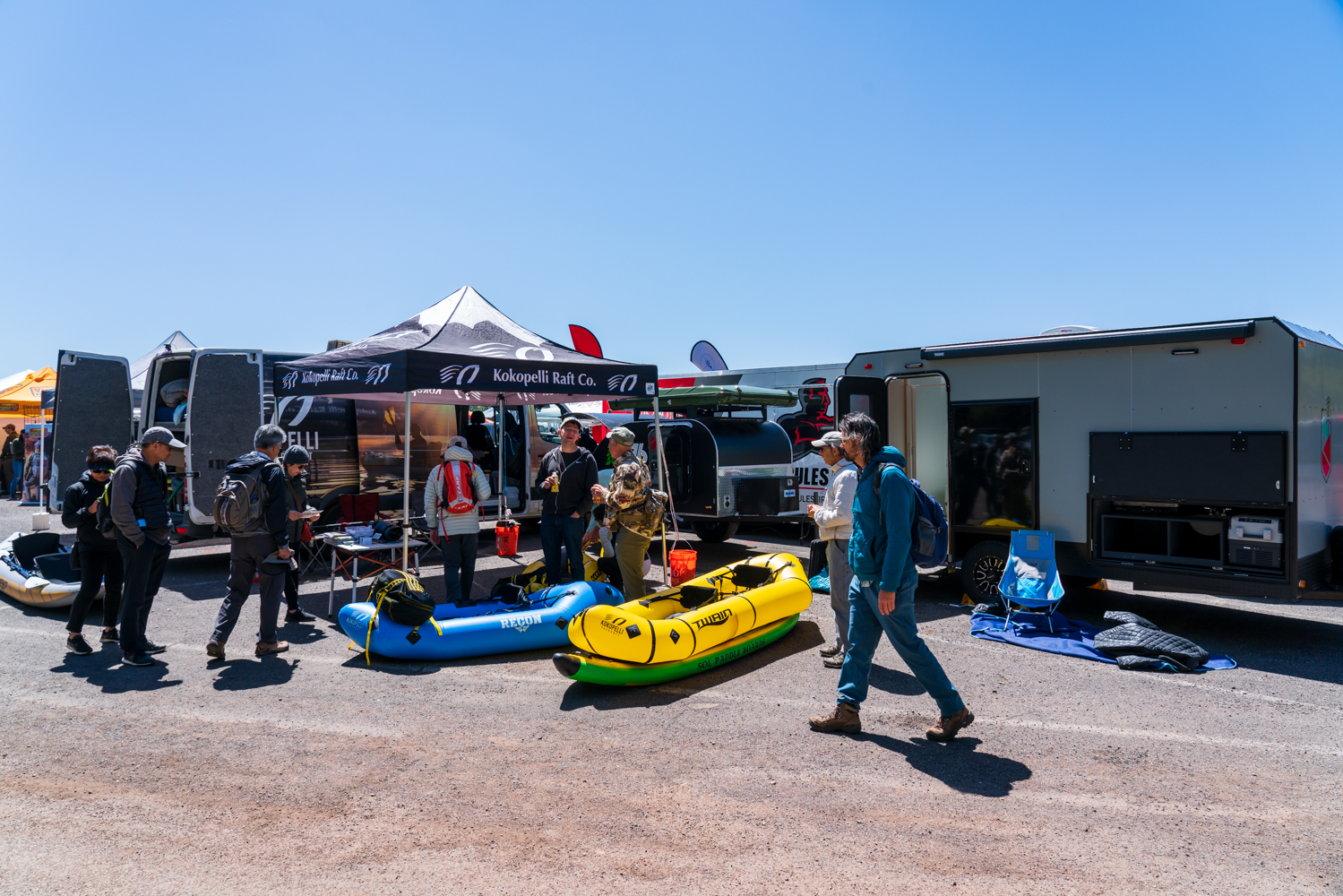 Warn had a bunch of new gear on display.  From new rigging with their Sidewinder and Hyperlink offerings to new Warn winch covers and bags. 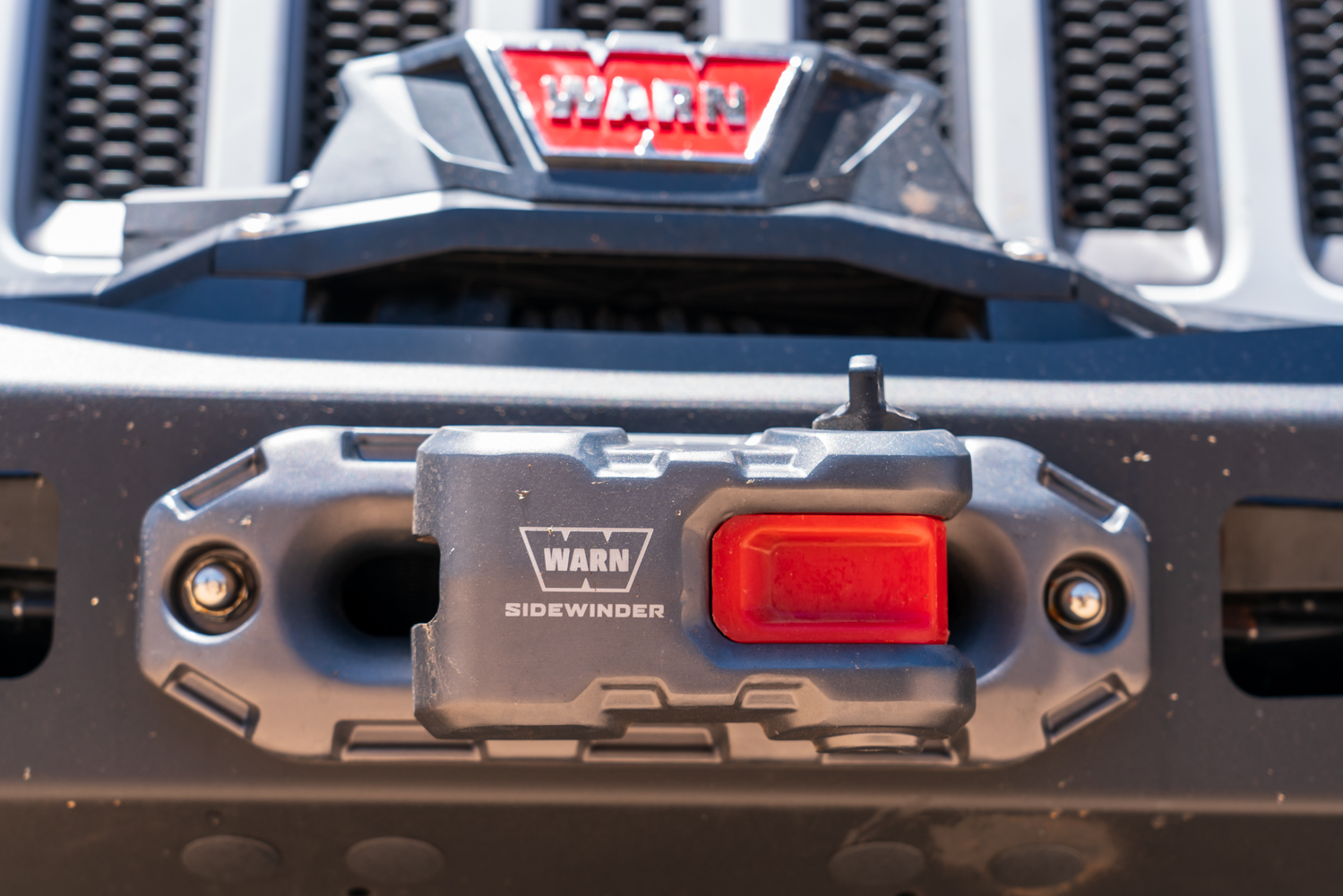 Again in 2019, the #Patchgame continues to be a big part of the Overland scene.  If you didn’t walk away with at least a handful of relevant morale patches or utilitarian gear tags you missed out on an Overland Expo tradition. 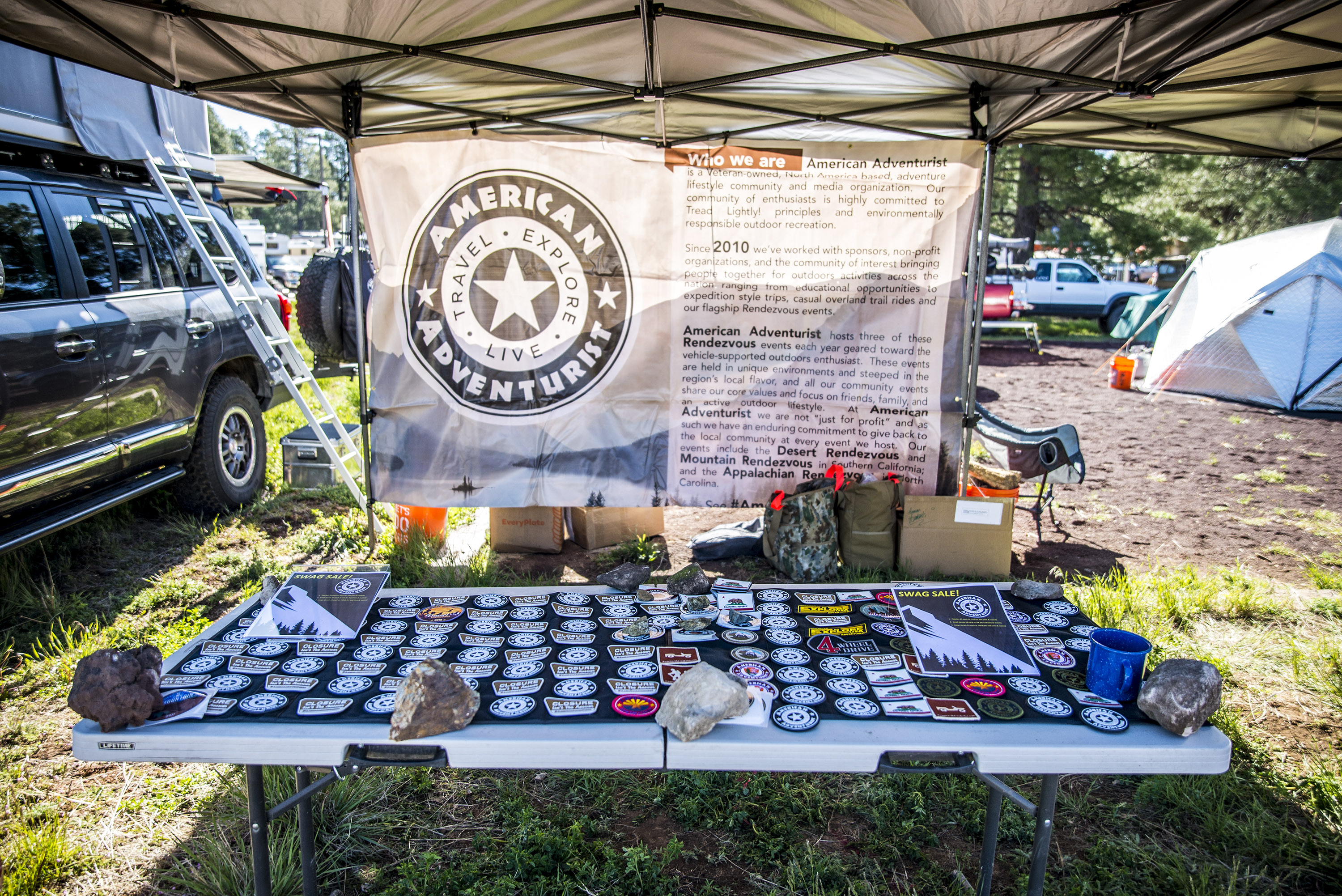 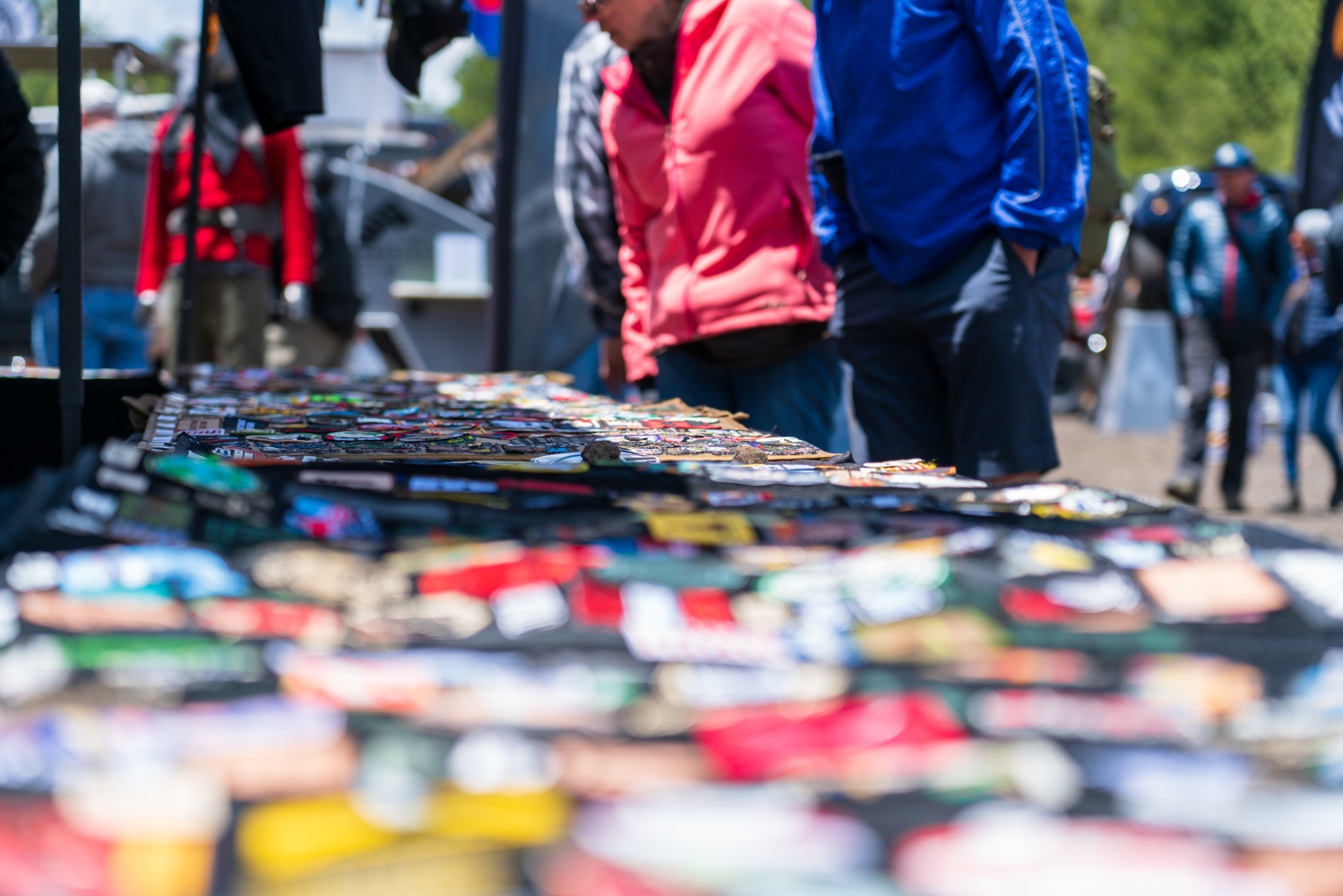 Blue Ridge Overland Gear had a new backback on display. This bag works with the same style of packing pouches that the tool bag and first aid kits use. BROG has also updated their pouches to make the contents easier to see. We also spied this fridge cover in the back of their van… 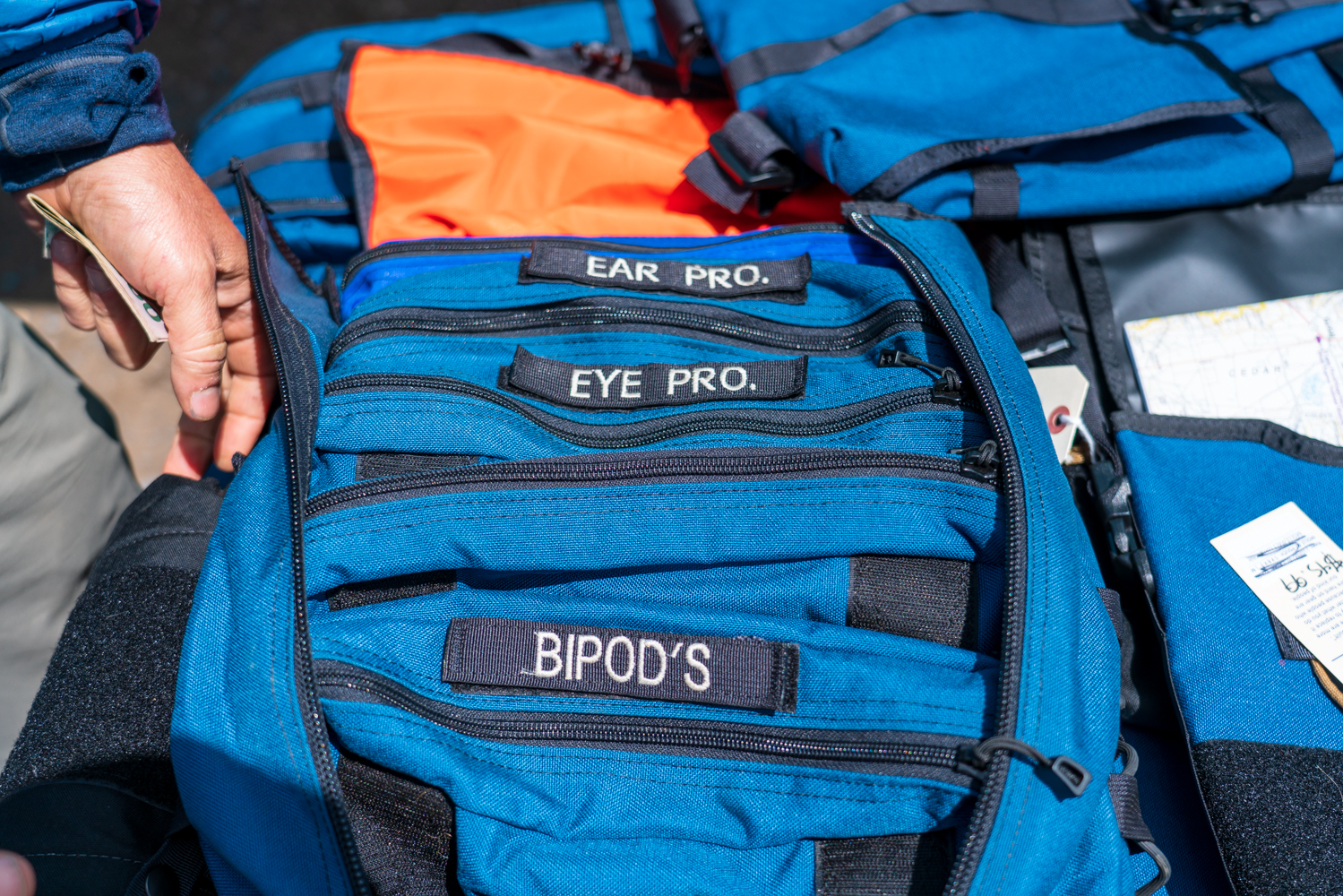 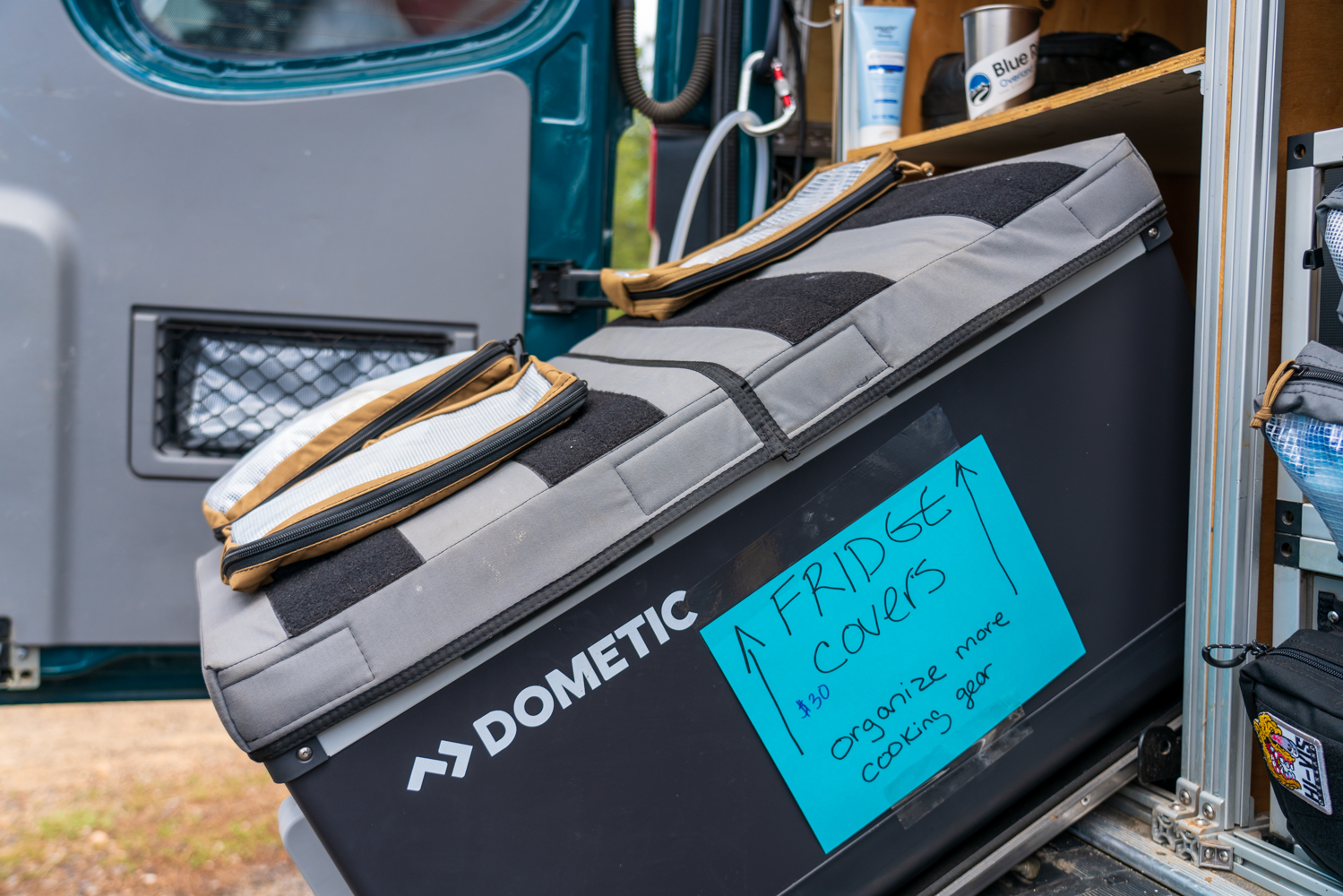 Mosko Moto makes some of the best motorcycle luggage around.  They’re now stepping into the apparel market and I have to say that I’m really eager to try their riding gear out.  Cut to fit over armor (versus having it as part of the garment) the Mosko apparel looks and fits great.

There were a number of Ford Rangers at Overland Expo as well as lots of new Jeep Gladiators.  It will be interesting to see how the aftermarket industry adopts these workhorse trucks.  We’re keenly interested to see how they hold up long term when used off road as advertised. 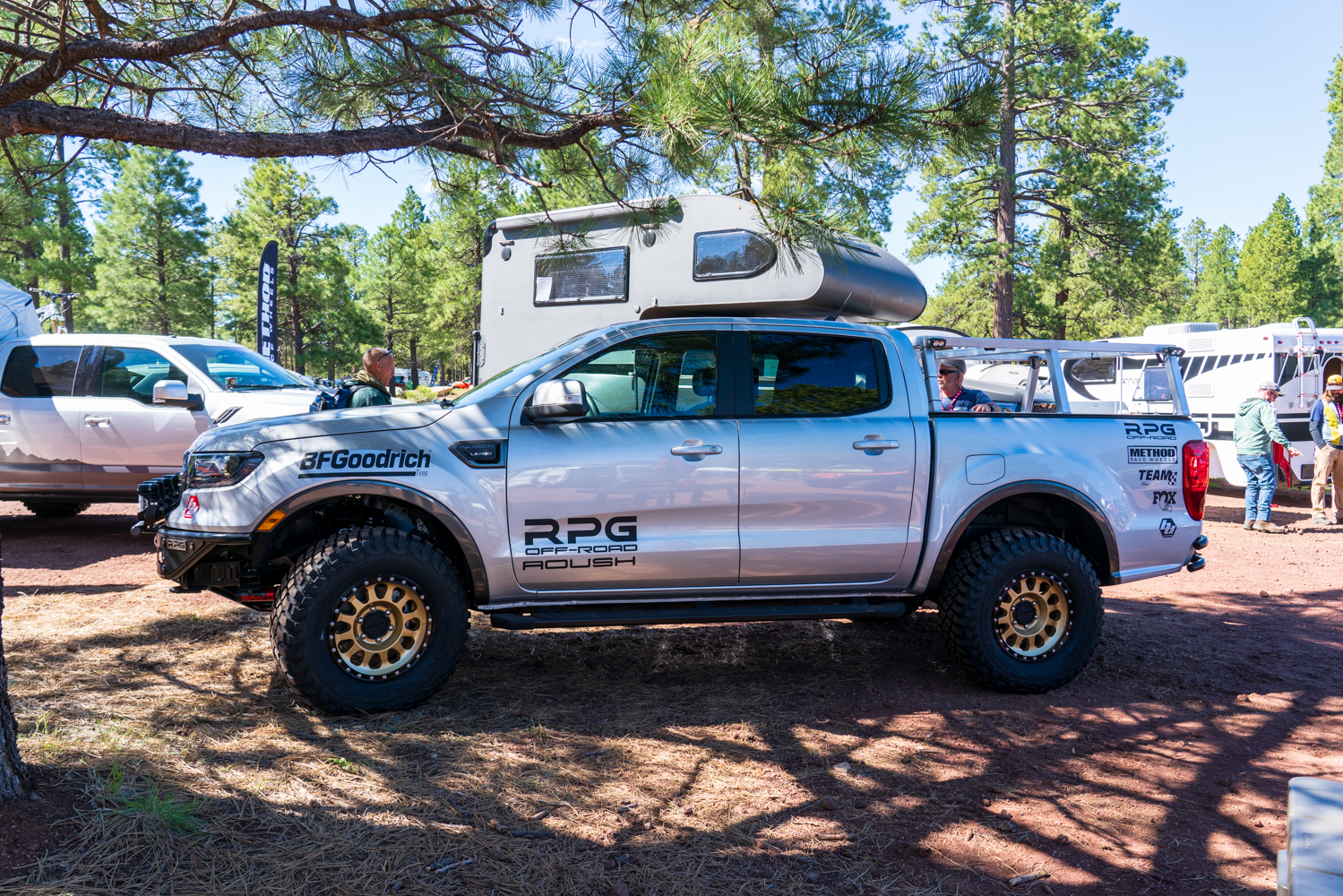 Adventure Imports is a solid company known for bringing Aussie and South African brands like Maxtrax, Indeflate, and MSA 4×4 into the US.  Their display was chock-full of rad new kit ranging from the new Maxtrax Extreme and Maxtrax recovery gear, to MSA’s line of well made outback accessories. Of note are their excellent drop fridge slides and drawer systems which were both very impressive.  The MSA 4×4 drawer system is different than most as it is made from aluminum extrusions which allow for much bigger drawers, which are lockable with interior lighting.  These drawer units have also been crash tested in Australia so they’re built for real world use. Consider us impressed!

Step 22 Gear continues to expand their quality line of recovery gear and soft goods.  Their anchor straps are now offered in several lengths to fit any need and unlike some lesser brands, all their recovery gear is independently tested to failure.  Step 22 also had a number of new bags, packing cells, and backpacks on display that feature all of the small touches and superb attention to detail that you would expect from Step 22.  Did we mention that all their gear is Made in USA? 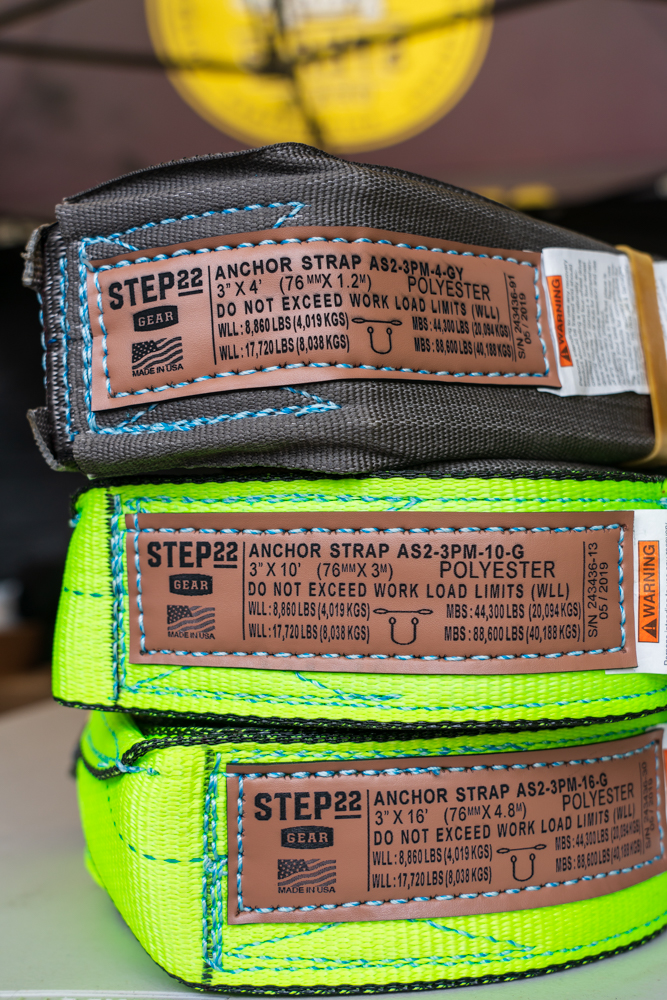 It’s always awesome to see what new vendors show up each year at Overland Expo, and this year we were pleased to see Flagstaff-based Wet Dreams River Supply at the show. Wet Dreams sells all kinds of top shelf gear to support the Grand Canyon river outfitters that are based in Flagstaff.  From Cook Partner stoves, to custom made “river-rated” Aluminum boxes, their gear has proven to be Grand Canyon rated. 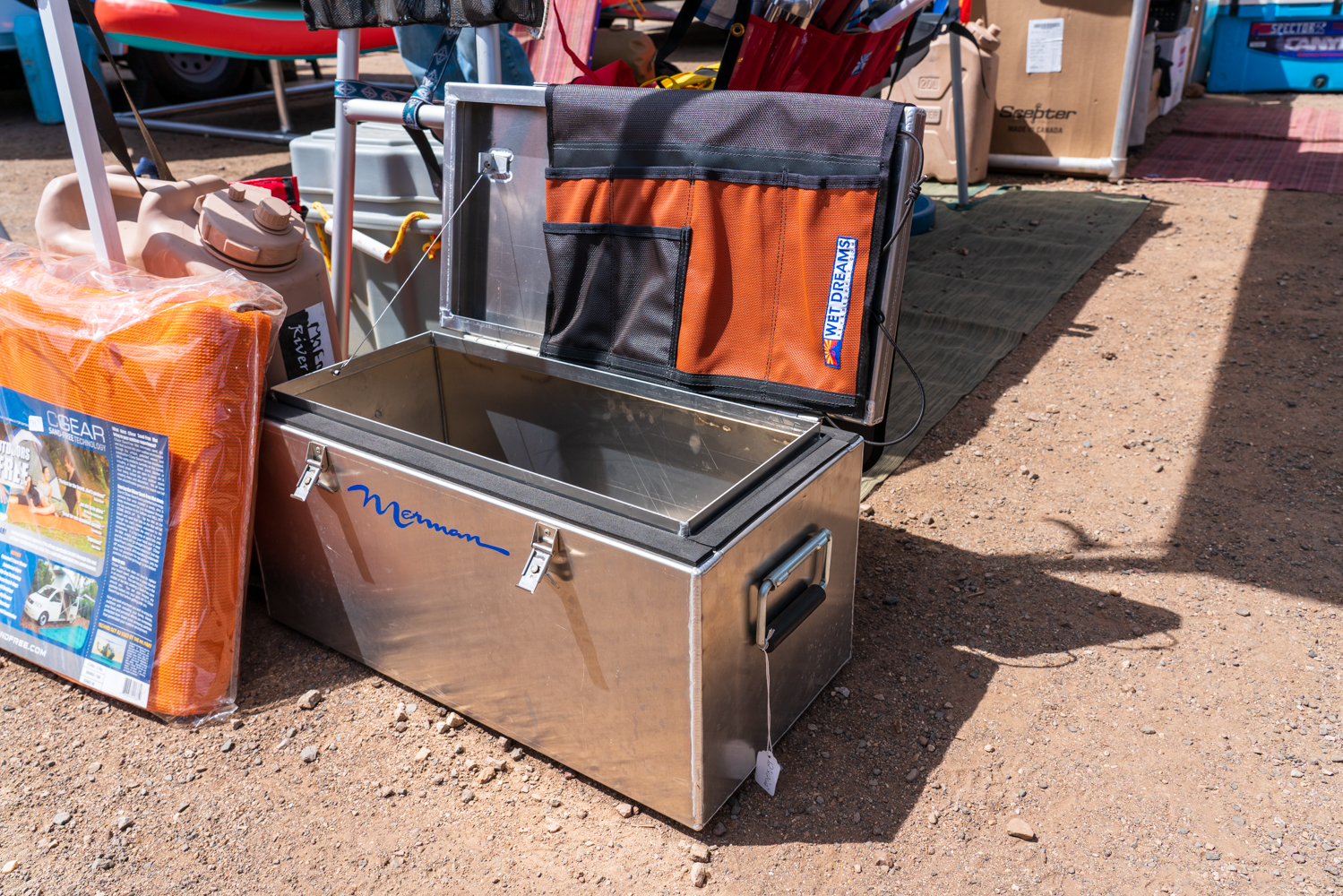 Rivian had their R1T on display at Overland Expo, and it drew quite a crowd. Say what you want, but EVs are coming to the Overland-O-Sphere very soon. Now if only I could afford one… 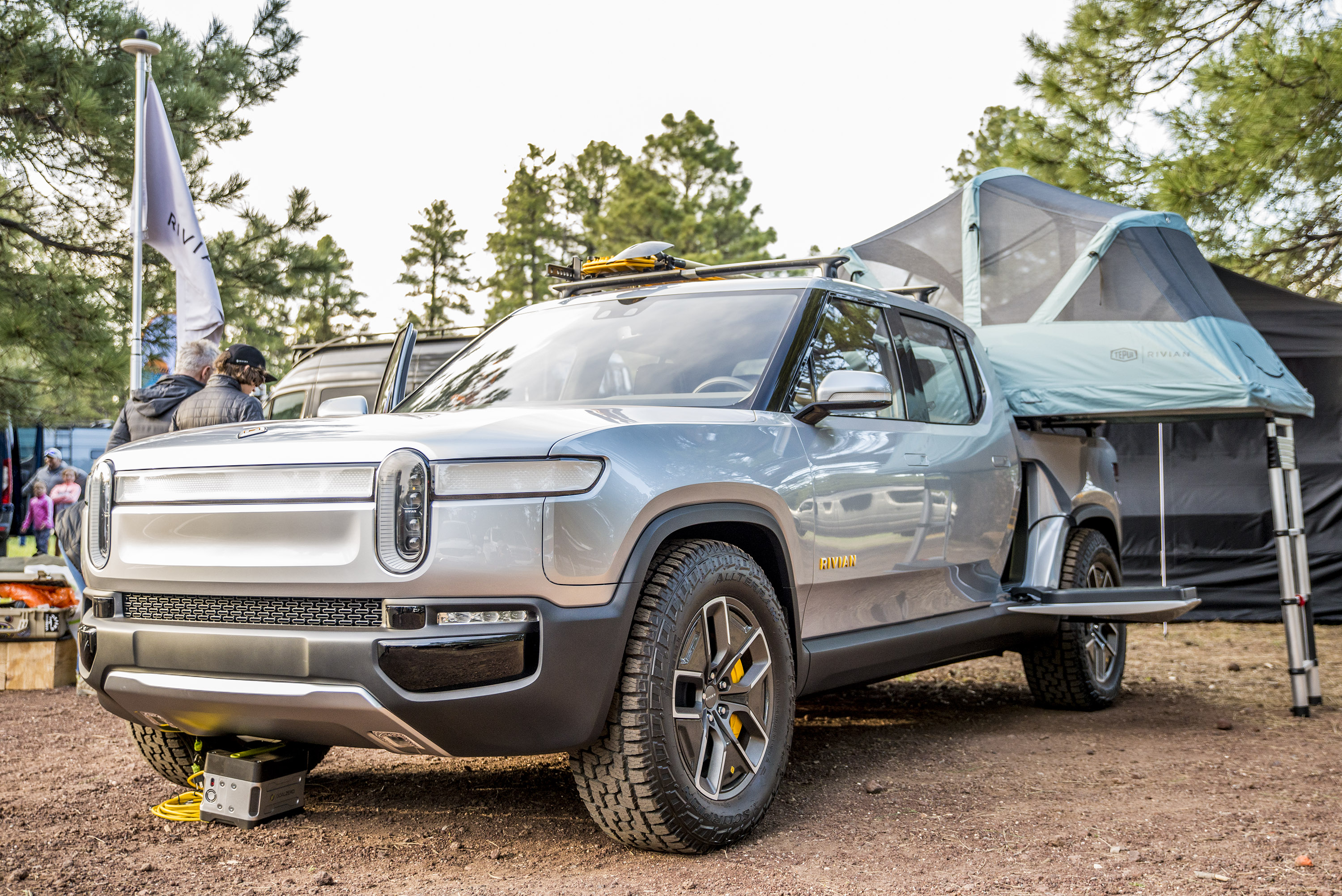 I’ve had the opportunity to see what a Sherp can do in the field, and they’re every bit as awesome as they appear on YouTube.  It was great to see them at the Overland Expo West 2019. 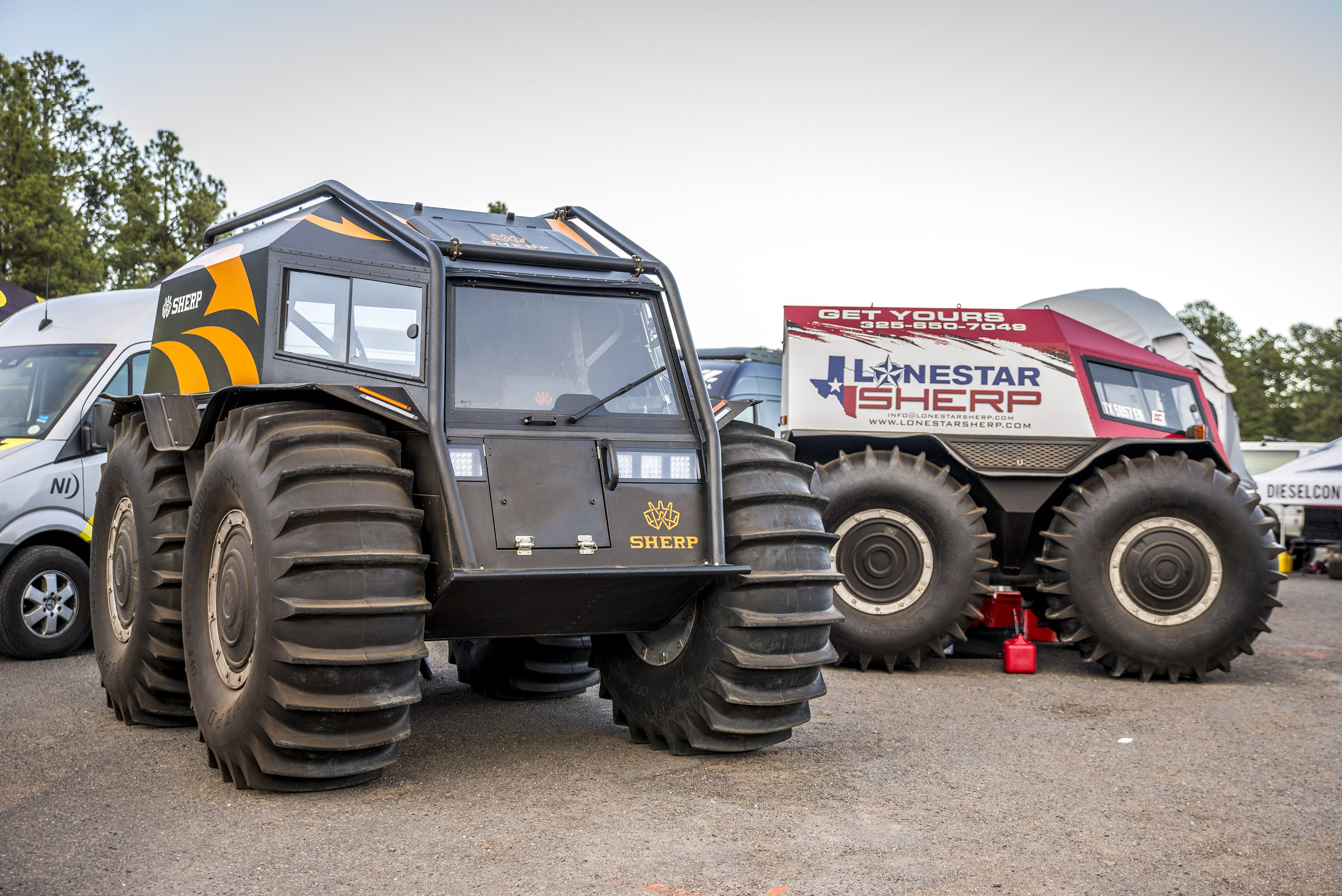 The main exhibitor area was a dizzying bazaar of gear and people.  Words cannot do it justice so enjoy a few more photos from around the sprawling exhibitor areas at Overland Expo West 2019.  You can ask questions in the comment section below if you want to know something in particular!

We’re grateful that we had an amazing location to interface with our own American Adventurist community members and the greater global adventure travel community.  This year we worked with kickass companies like Prometheus Design Werx, Exploro and Adrift Adventure to host a treasure hunt that sent our followers scrambling on foot across the San Francisco peaks in northern Arizona, and we worked with Falken Tires to host a give-a-way for a set of their tough as nails Wildpeak tires. 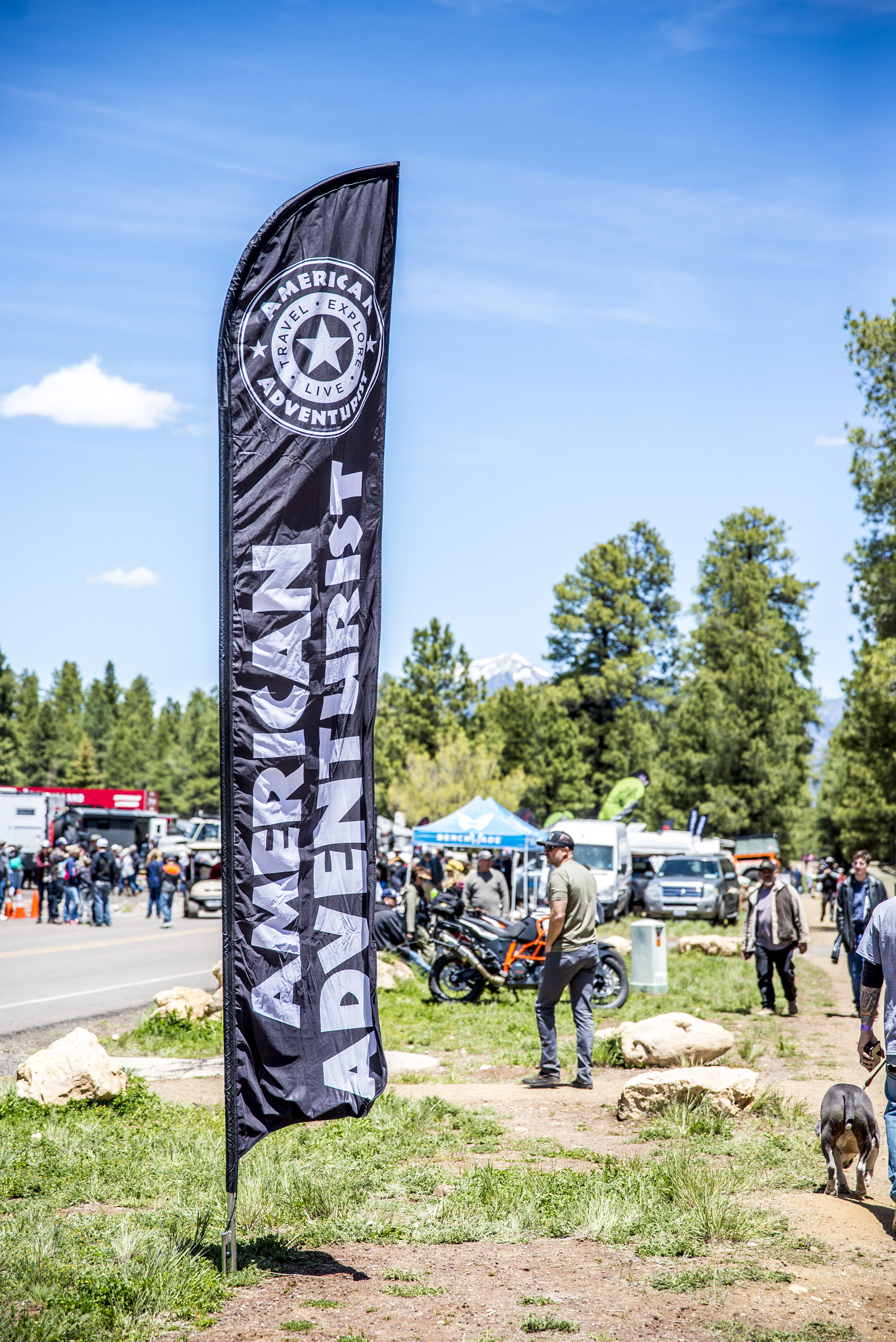 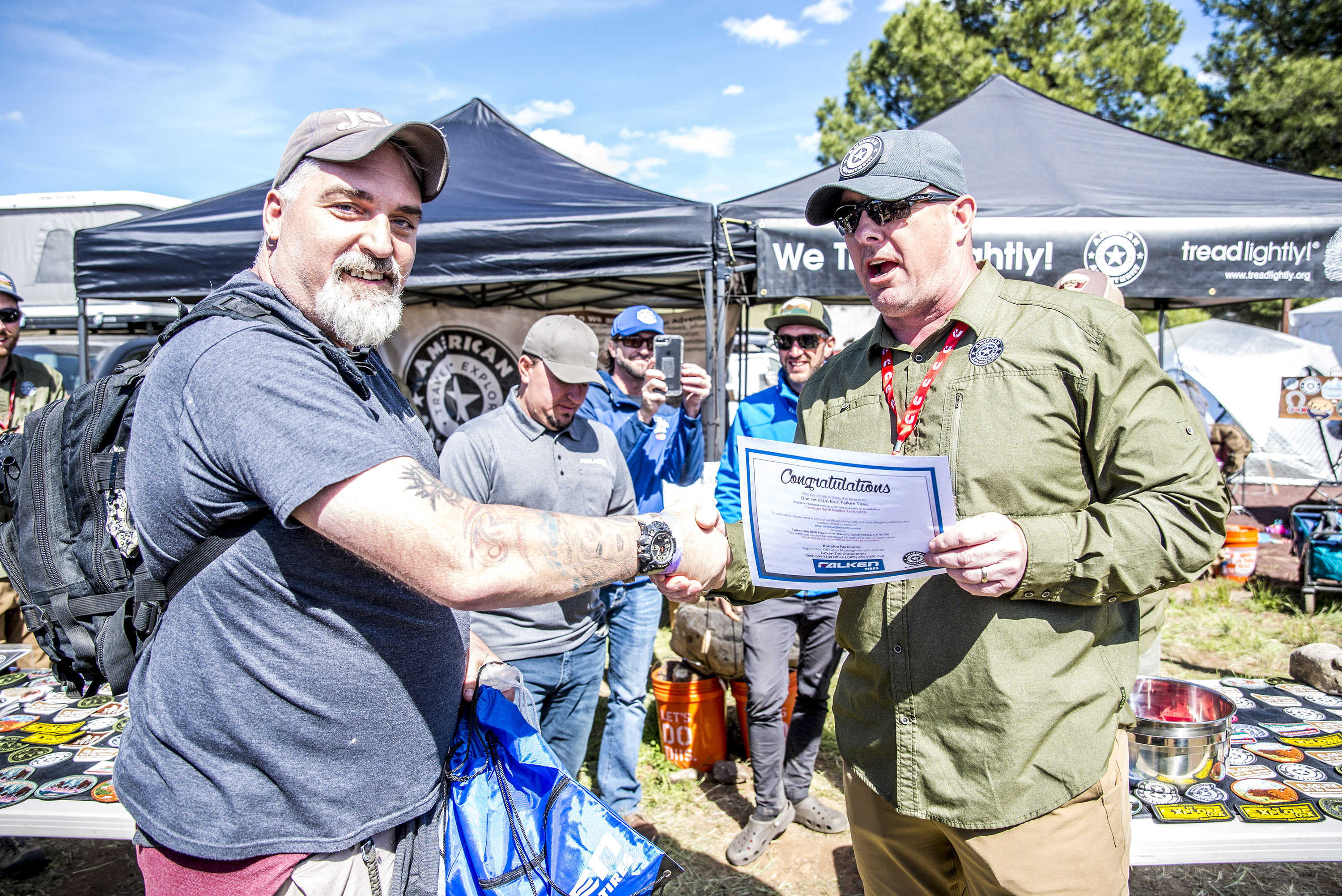 We were also given the opportunity to honor the men and women who wear the cloth of our nation for Armed Forces Day.  We were honored to address members of the Arizona National Guard and all those currently serving at a brief commemorative ceremony at Fort Tuthill.  American Adventurist and Overland Expo also produced free, limited edition Overland Expo West 2019 commemorative decals for active and retired service members.  Freedom is not free – thank you for your service! 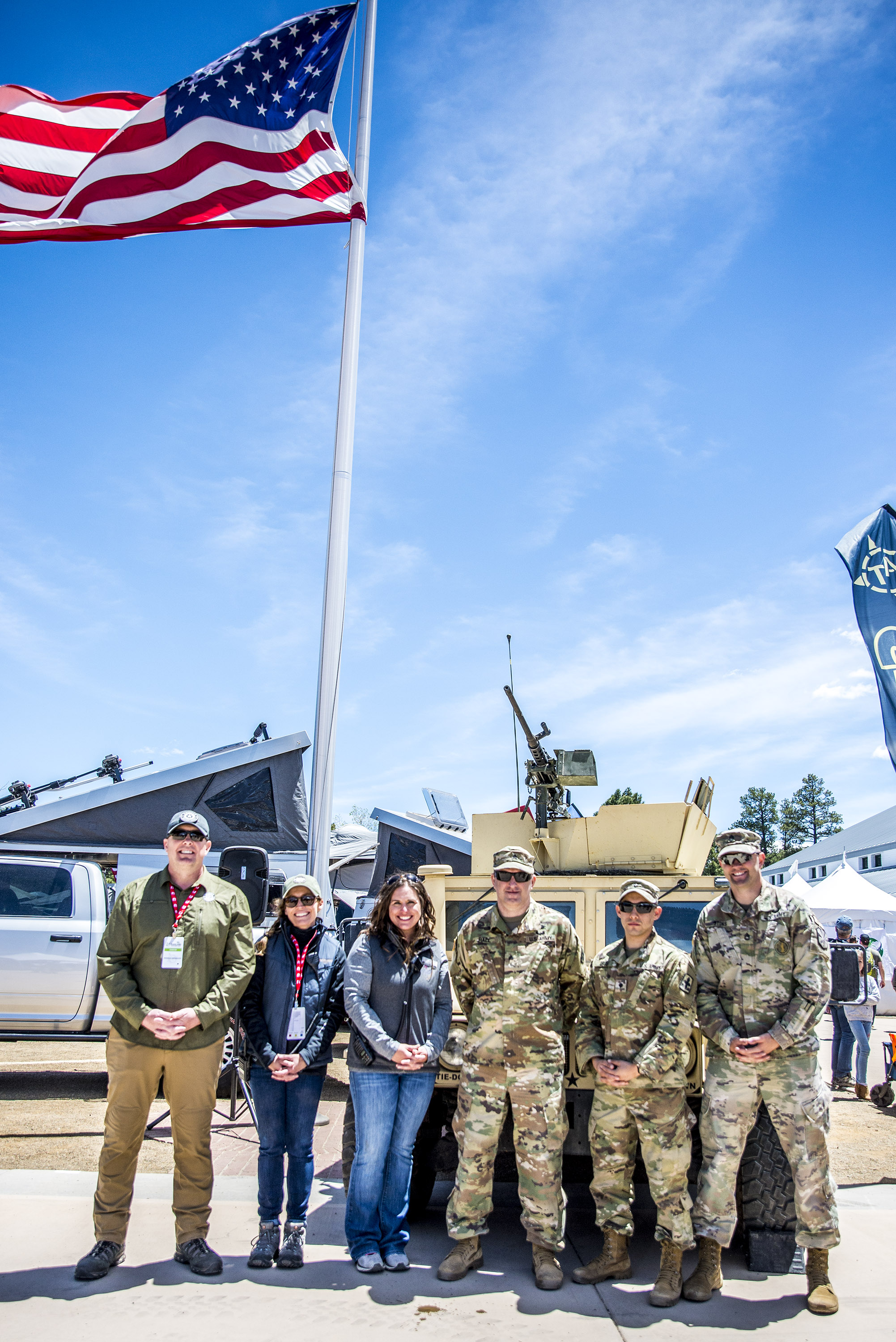 Hopefully we’ll see you at Overland Expo EAST, October 11-13, 2019 at Infinity Downs in Arrington, Virginia. With a brand new venue and Lodestone Events in the game, we’re convinced that 2019 will be the best Overland Expo East yet.

American Adventurist would like to extend a sincere thank you to everyone who has worked to make Overland Expo what it is today.  A special shout out to our members, supporters, industry partners, and of course, Overland Expo Directors Emeritus Jonathan and Rosanne Hanson, for making Overland Expo a thing.

chad-de-alva
Chad de Alva is an FAA approved drone pilot, filmmaker and photographer based out of Flagstaff, Arizona. Born and Raised in Telluride, Colorado, Chad ...