Editor’s note: Back in 2010, our “Rendezvous Conspiracy” of like minded Adventurists sat around a campfire in the Southern California desert dreaming up ideas to get out and explore more often. That quiet conversation resulted in the first Desert Rendezvous. Fast forward ten years and American Adventurist grew to tens of thousands of followers across the social media spectrum with members in all 50 states. Early on we made it our business to promote responsible outdoor recreation, 4WD education, and Tread Lightly principles and we’re still doing it today – I honestly never imagined that so many other people had similar dreams and interests, or that this would grow to be what it is. We’ve held Rendezvous events in California, North Carolina and now Arizona and partnered with dozens of amazing brands and events like Overland Expo along the way. So this year’s theme is gratitude – we’re grateful for those who believed in us and what we’re about, and for all of you who chose to be a part of this journey. In the end, it’s the people, the family and friends that made this all possible, and you are why we do what we do. THANK YOU for making these last 10 years, and this Community that we’ve built, something that we can all be extremely proud of. 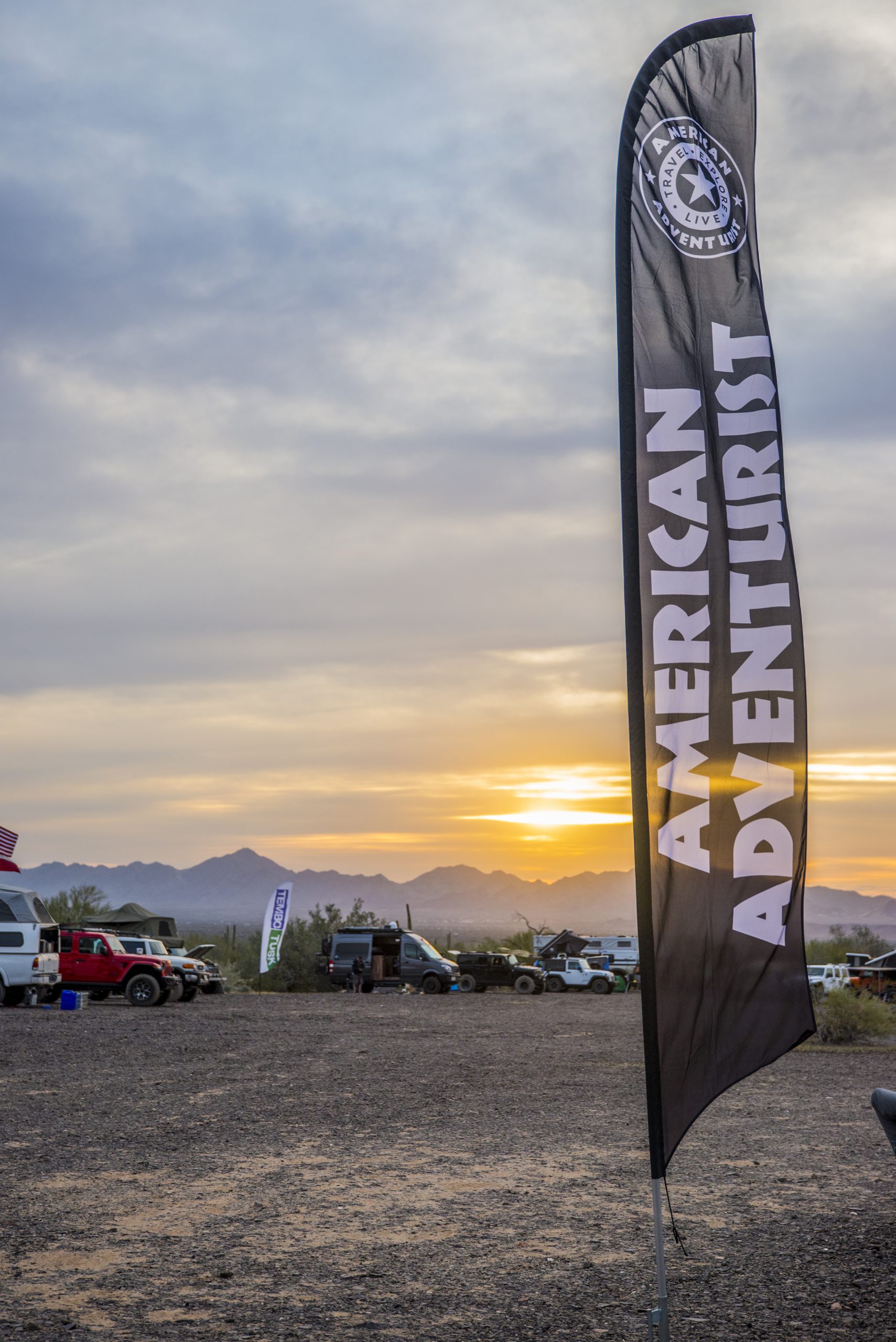 Since this was our 10-year anniversary of Rendezvous events, we wanted to give this event a special touch. After bouncing around several desert locations in SoCal over the last decade, the consensus was to change it up a bit and shift the event to just north of the KOFA Wildlife Refuge on BLM land near Quartzsite, Arizona. Luckily, we had a good man there to do some reconnaissance and boots on the ground coordination, our fellow Adventurist and staff member John Rhoades. Many, many thanks to John for putting in the legwork and finding this wonderful spot for the 10th Annual Desert Rendezvous.

With the Rendezvous site finally nailed down, and the planning and coordination completed, it all came down to how we were going to get there. For most of us, we’d either take a few dirt roads in our 4WD vehicles, or just hardball it straight from home direct to the coordinates. For myself, I decided to take on a slightly different adventure for most people here, and that was to get there by motorcycle a few days earlier. I had coordinated with another member and friend here at American Adventurist, Tim S. and we had decided to take a portion of the Nevada Backcountry Discovery Route from Pahrump, NV to Oatman, AZ and from there we’d hard slab it down to Quartzsite, AZ.  Now, this would be my first big trip on a motorcycle, and not only that, but the longest ever in the saddle, and my first time on dirt, and on a Back Country Discovery Route no less… this would truly be an adventure for me!

Our arrival at the Desert Rendezvous was fairly late in the day on Friday afternoon, but we were just in time for the start of the festivities. There were already a good number of Adventurists there and all set up, which made for a very welcoming sight. Just as we finished unloading our bikes and setting up camp, the BBQ social was about to begin as a large group of 4WD’s was just returning from their days’ planned trail run out to the KOFA Wilderness area led by the fine folks at Canyon State Overland. Thank you for putting the trail run together!

With everyone back in camp, the smell of cooking burgers and dogs drew the hungry folks toward the main camp area. Many props to Mountain Hatch for sponsoring the BBQ social, as we sourced the beef for the burgers and dogs, and the freshly made buns from a local butcher and bakery nearby. Skottles were lined up and even chili was being cooked over the fire as everyone gathered around.

We love travelling and visiting the towns and cities that we pass through, and we love to support local mom and pop businesses whenever we can. The local beef made for the most delicious burgers we’ve had in a long time and those freshly baked old west style buns were incredible. The campfire was set, bellies were full, beverages in hand, and the social continued throughout the night with another spectacular sunset.

A small rain storm passed through in the night so it made a bit of pitter patter on the ground tent. It had been very a long time since I’ve camped in a ground tent, and especially when it was raining. But it was sublime after a long three day ride to get here.

We awakened Saturday morning to a break in the rain, damp ground, and nice rainbow off to the West. While the coffee was brewing and breakfast was being cooked around camp, we could see dark looming clouds off in the distance and the wind constantly changing directions. A small swirl just off camp began forming and the next thing we knew, it began raining pretty hard. This rain continued for the next couple hours so many folks took shelter under awnings or in their tents until the storm passed through, brewing lots of hot coffee and making sure all the Bailey’s Irish Creme in camp was accounted for. Small rivers began to form through the many satellite camps spread around but luckily the ground was hard and dry enough to allow the water to absorb quickly.

As the clouds parted and clear skies were just off in the distance, the rain let up and folks began coming out from their covers. Kids were launched in every direction on our Scavenger Hunt, and it was just about time for Dave’s 4WD Recovery Basic Course. Dave is a Certified Trainer with the  International 4WD Trainers Association, and his class covered a 202 Level class based off his previous 101 Level class presented at the last Rendezvous. These events are great to attend, as not only do they help you brush up on current knowledge and new ideas, but they also give you an edge on doing things right. The devil is in the details… especially with people’s safety and lives at stake.

At the same time of the 4WD Recovery Course, a few of the other adventure moto riders had formed up to go for a trail run off to the East of camp. Even though I could have joined them with my bike, I figured it would be too technical considering my setup, plus I had to shoot photos for the event. When they returned, it was a good choice as Tim had mentioned it was not ideal for my bike and I probably would not have had a good time, but the guys who went out had a great time of course!

As Dave’s period of instruction came to an end, the Kid’s Scavenger Hunt was wrapping up and the many kids began lining up at Stuart’s camp to collect their prizes. This part of the Rendezvous is always a big hit with the children and the parents. To keep the kids interested and challenged, this particular scavenger hunt was an evolution from the previous years’ and it turned out great!

The rest of the day was left to your own devices and whatever you’d like to do. Naps are authorized and even encouraged at a Rendezvous. With a good break midday, the only event left for the day was the Camp Cooking Competition and Potluck. Even by just after lunch, folks were already prepping around the main camp fire and getting their meals ready to go. It wasn’t long before the entire area was infused with the various aromas of special dishes and secret recipes.

As the time for the Camp Cooking Competition/Potluck started closing in, more dishes began showing up on the table whether they were main dishes, side dishes, or even contributions to the potluck for all to share. There was a great variety of dishes from the numerous competitors, from several varieties of excellent chili to Korean tacos, ramen salad, and even apple cobbler. All the dishes were mouth watering as the Adventurists cast their votes, dropping their tickets into their chosen dishes. A massive thank you to all those who participated as this one really brings the community together. The prizes for this competition were sponsored by L.T. Wright Knives and the competitors were itching to reach the top three and win one of their amazing, handcrafted made in USA blades.

Through community vote, the winners of this years 2020 Desert Rendezvous Camp Cooking Competition are:

And First Place: @Bald_taco and their Korean BBQ Beef Tacos, winning the Grand Prize pack of a Boning Knife, Machete and Hat from L.T. Wright Knives.

Congratulations to the winners! And again, a HUGE thank you to those who participated in this very important part of every Rendezvous event. It’s always fun to try new things but also even more fun to one-up the last winner’s dish. Don’t forget that you can use whatever means you’d like to use to cook with (dutch oven, camp stove, smoker, open flame etc), but we always encourage you to bring the cooking over to the main fire pit so as to bring the competitors together to see what others are doing and to possibly stir up fun and new ideas for next time. And don’t forget to bring your own plate – no one goes hungry at a Rendezvous!

With half a cord of wood left for Saturday night, locally sourced and graciously brought to camp by the Mr. John Rhoades, we needed to burn the rest of it as this would be our last night before we needed to pack up and head home the next day. We all gathered around the main camp fire, while others gathered around satellite campfires, and with beverages in hand and full bellies, the socializing continued into the night.

With a clear and crisp morning, eventually all the Adventurists were ready for the raffle after their breakfast and social meanderings. But first we had to take our traditional group photo taken by our good friend and fellow Adventurist Brent Haywood of Brent Haywood Photography. With the group wrangled, group photos/videos taken, and folks back in their seats, the raffle began. We want to massively thank our many, many sponsors for contributing to the American Adventurist raffle for the many years we’ve held these Rendezvous events. Thank you!! 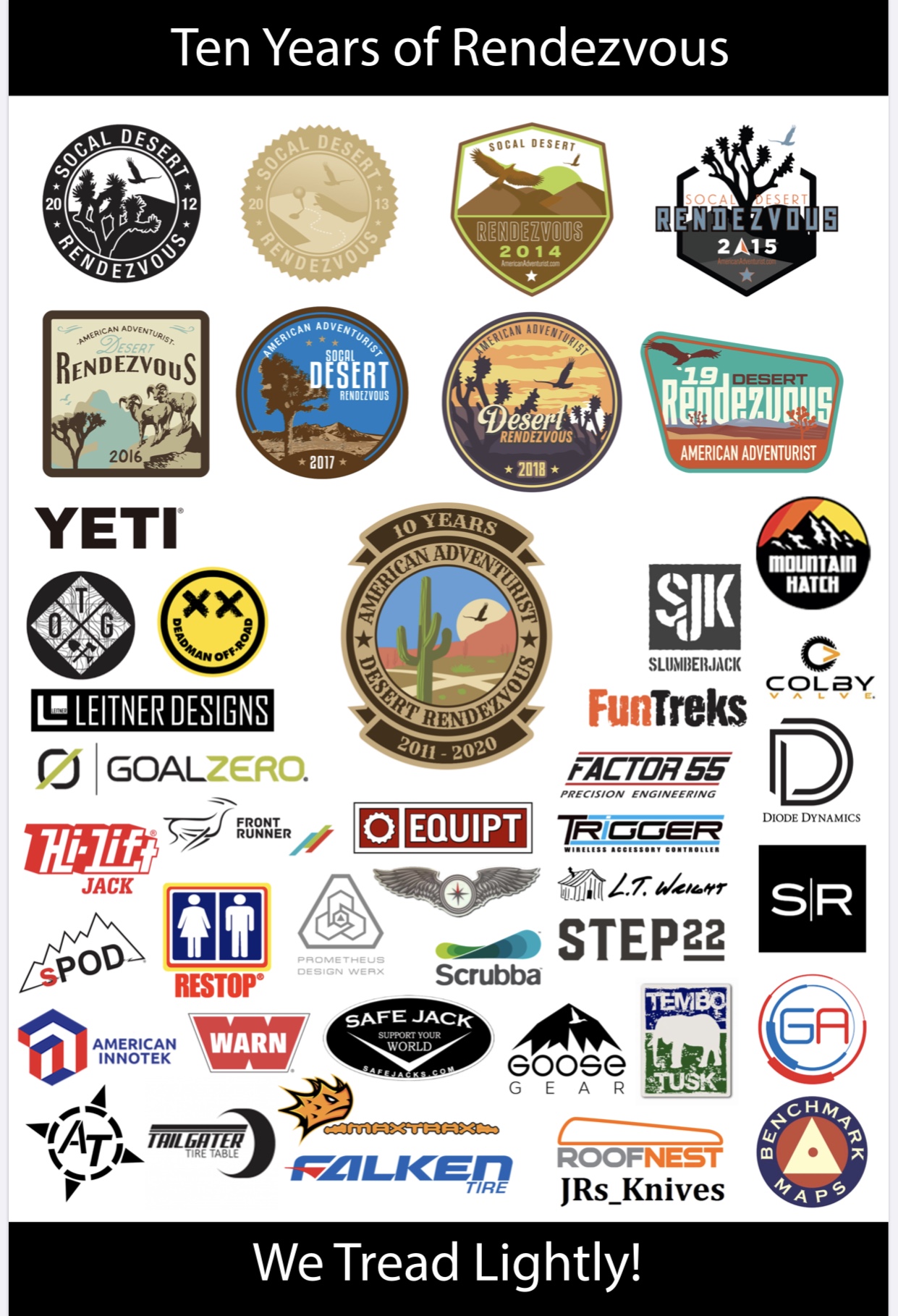 As everyone packed up and left (some with MAJOR new loot!), the staff started breaking camp as well, but first making sure to police the area for cleanliness to abide by our Tread Lightly! principles. No trace of our Rendezvous was left behind, fires were out, doused, stirred and scraped. You could not tell that hundreds of people had spent four days there in the Arizona desert.

Thank you to our wonderful Community for supporting American Adventurist for the 10 years we’ve had thus far, and to the many more years to come!