There are two different kinds of trips: those where friends get together for a weekend camp out, and the trips that we dream of doing. Some think the dream trips have to be to South America or across the country, but that’s just not true. We’re blessed to live in a place where so many great destinations are attainable and just waiting to be planned. The dream trips usually start out as casual conversation, on a quick weekend camp out with a few friends. That’s how this trip started out.

Death Valley in December. Prep was anything but simple—Dave of American Adventurist stepped up to plan the logistics and the route. I talked to several individuals about the trip, and everyone was like minded: we all needed to up our gear game. My wife was in desperate need of the proper layering clothes. Everyone wanted new sleeping bags. Some bought new radios and others (myself included) purchased a new roof top tent.

Five days in the dead of winter. We had 9 vehicles; each vehicle carried extra fuel and recovery gear. Some of us half kidded about the weather. In reality none of us knew what to expect except to prepare for the worst and hope for the best.

The plan was for everyone to meet at Trona Pinnacles so we could step off into Death Valley the following morning. We departed Corona around 9:00am and hit unrelenting wind until we got on the 395. I was really hoping this was not an omen for the trip. The caravan consisted of Brian, his daughter Aislinn, and his friend Garrick in a 4Runner; Matt and his son Cody in his Tacoma; and my Wife Jacki and I in our Tacoma. About an hour before the Pinnacles Richard caught up in his Xterra and joined our caravan. Our drive was uneventful with one exception: we passed a gas station with a vehicle surrounded by several police cars, lights flashing. Naturally, Richard stopped here for gas. Seemed reasonable to me, reasonable to keep going and see Richard at the Pinnacles that is. 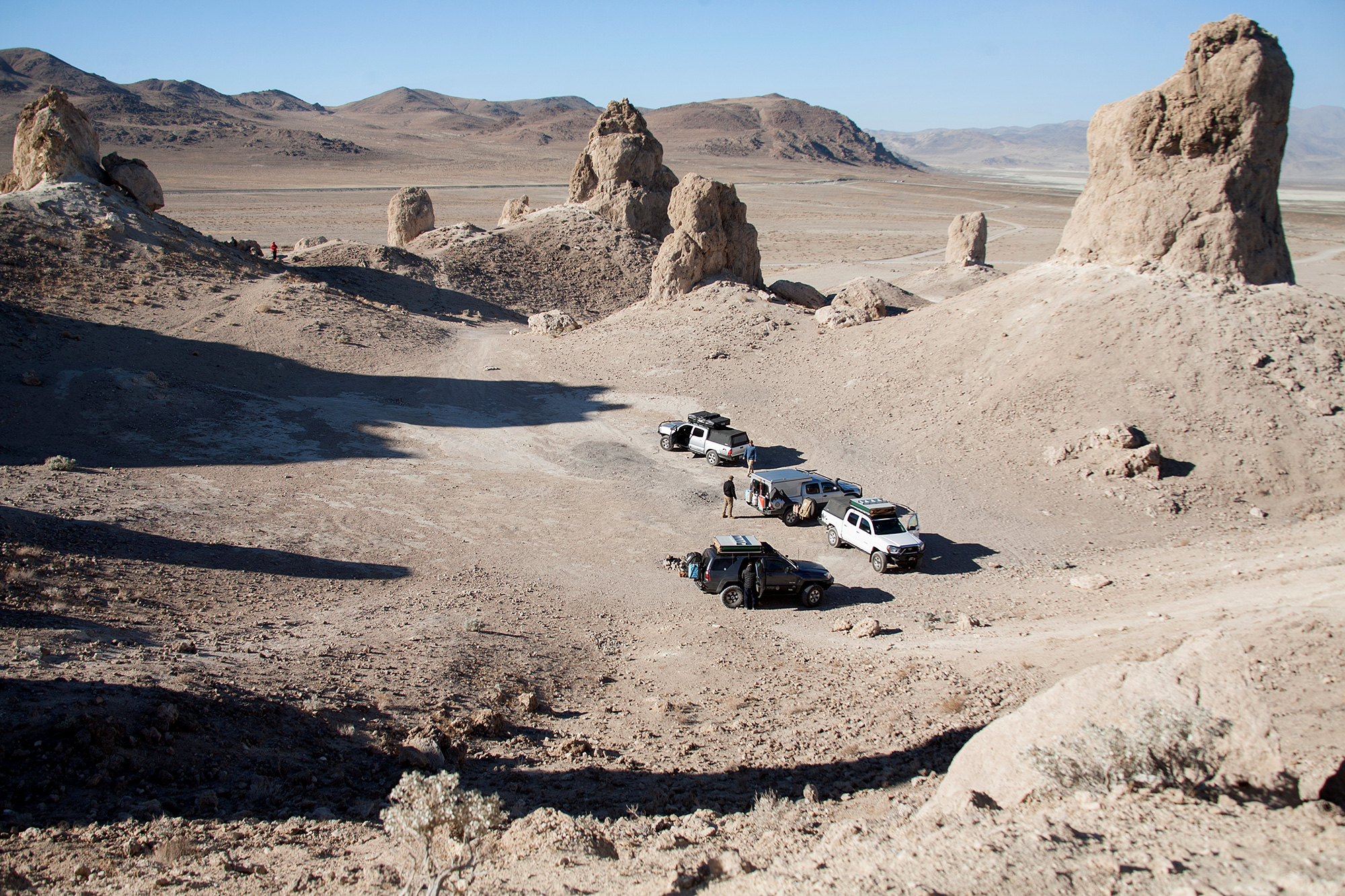 A couple miles from the Pinnacles turn off I spot Dave and follow him to our camp for the night. We expected a windy night so Dave got up there early and found us as much shelter as one can find in a giant flat area. We camped smack in the middle of a bowl surrounded by the pinnacles themselves. Richard miraculously survived his adventure at the felony stop gas station and joined us in setting up camp. Not long after camp was setup, another part of our party showed up. Jerry in his Chevy powered FJ60, his son Bryan in his Tacoma, and Paul and Henry (the world’s largest Dachshund) in his 80 series Land Cruiser. Now we were only waiting on Cris and his wife Paige in the Dodge Power Wagon and custom off-road teardrop trailer. Cris and Paige had a last minute issue with the truck, but got everything together just in time to make the trip. They showed up about 7:00pm. 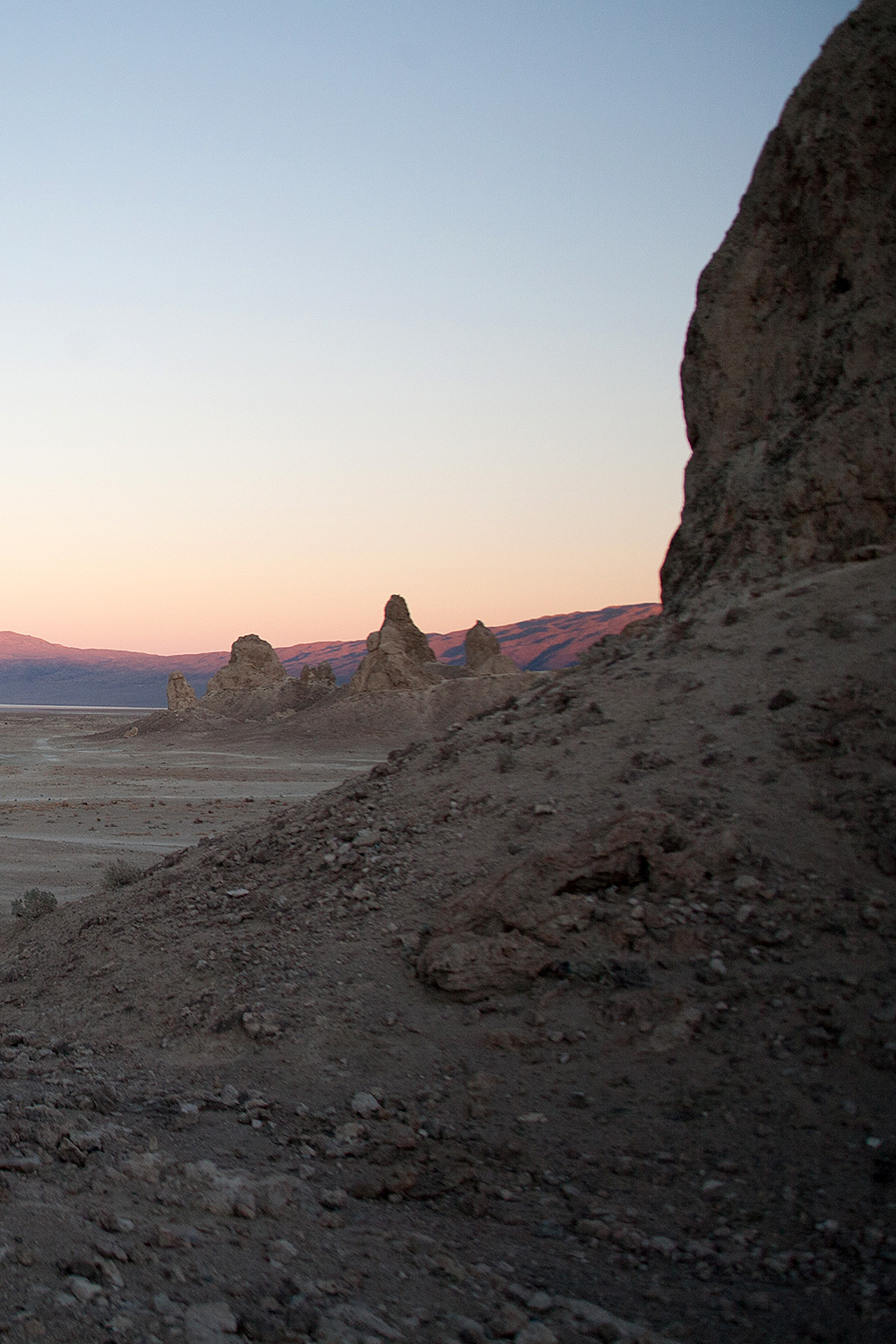 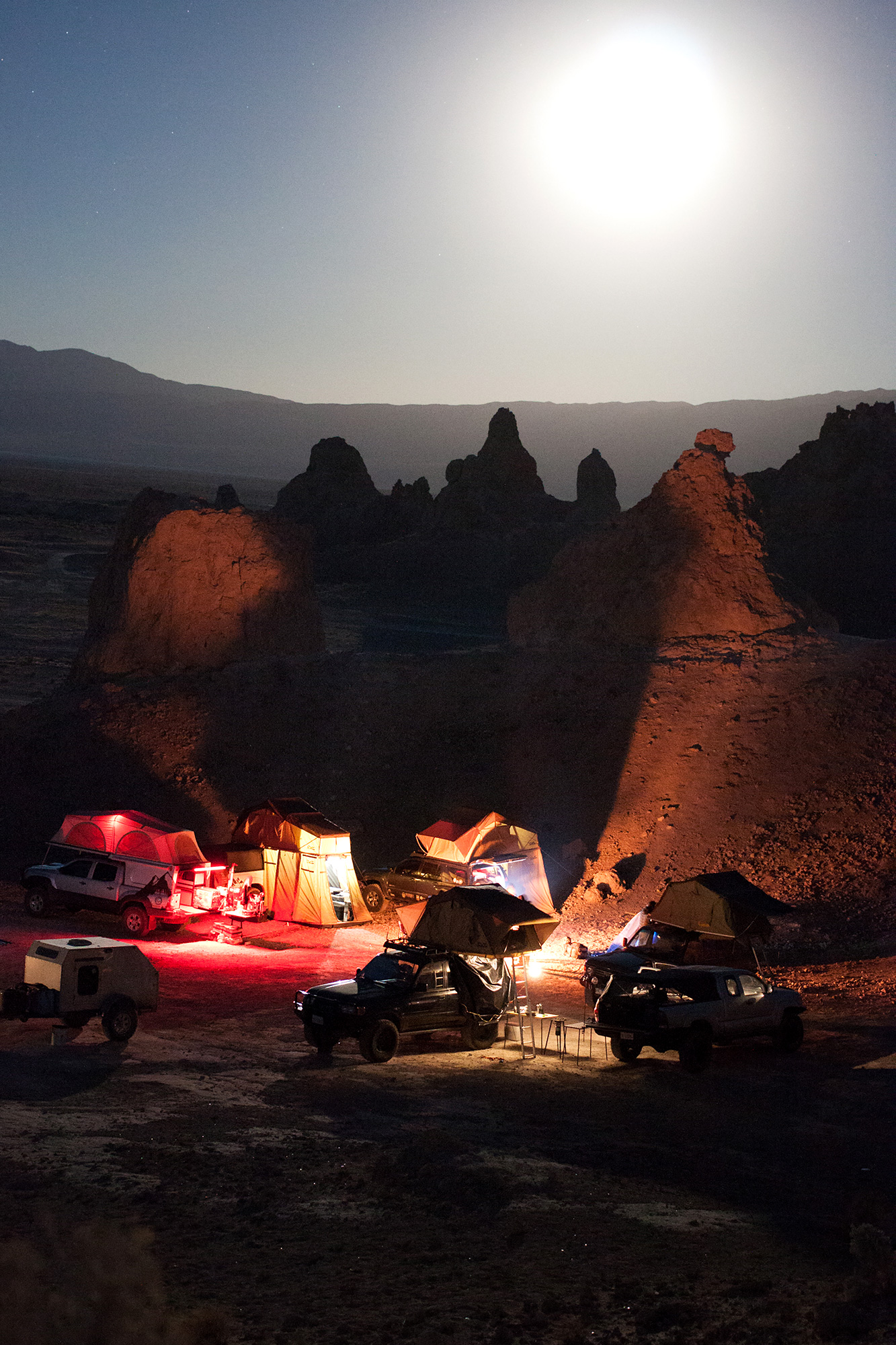 Camp was set, night had fallen, and the wind was up. It was time for a camp fire, appetizers, and drinks. Paul cooked up mini weenies wrapped in bacon on a Tembo Tusk Skottle, served with hot buttered rum. With the cold and wind, most were quite interested. The wind died down for the evening so we could all enjoy a nice fire before bed. Camera snipers took advantage of the bowl we were in and deployed all around into the hills to take pictures of the night sky, the camp, and the rising moon. 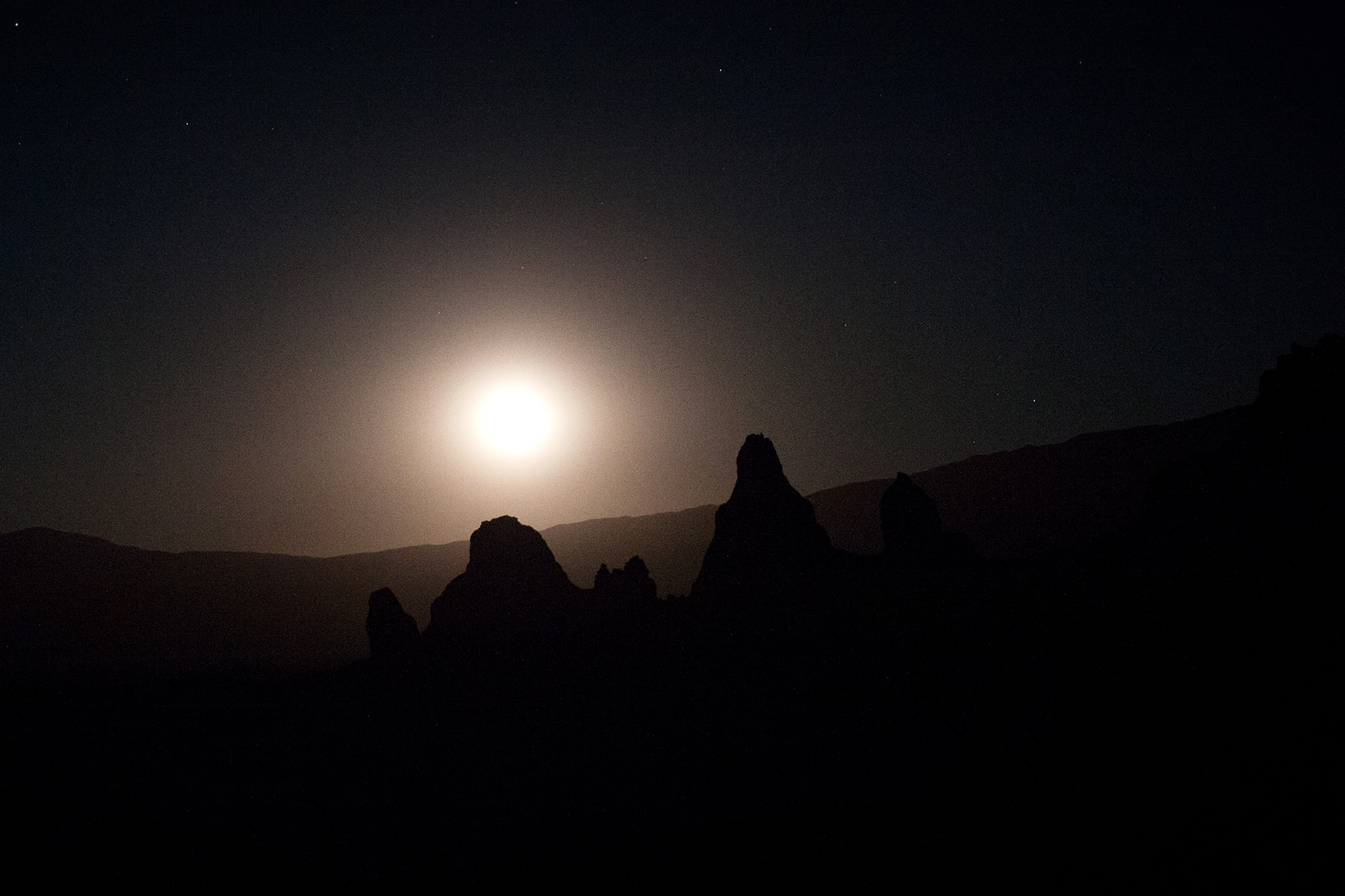 That night would be our first night sleeping in our new CVT Mt Shasta roof top tent (complete with annex room). It would get put to the test in the low temps as the howling wind kicked back up. Jacki and I were in our new Mountain Hardwear 0-degree bags, and we both slept amazing. The tent did great, we were warm, and we both woke up with a new vigor.

After we all had coffee, the driver’s meeting was done and we rolled out for Balarat Ghost Town. We pulled into Trona for a quick logistics stop and to ensure our gas tanks were all topped off. At Balarat we aired down and took some pics. There is a small building which is their jail, morgue, and hotel if vacant. Charles Manson’s old 1942 Dodge Power Wagon, used by “Tex” Watson to flee Barker Ranch when the law came after them, sits in a nearby field. 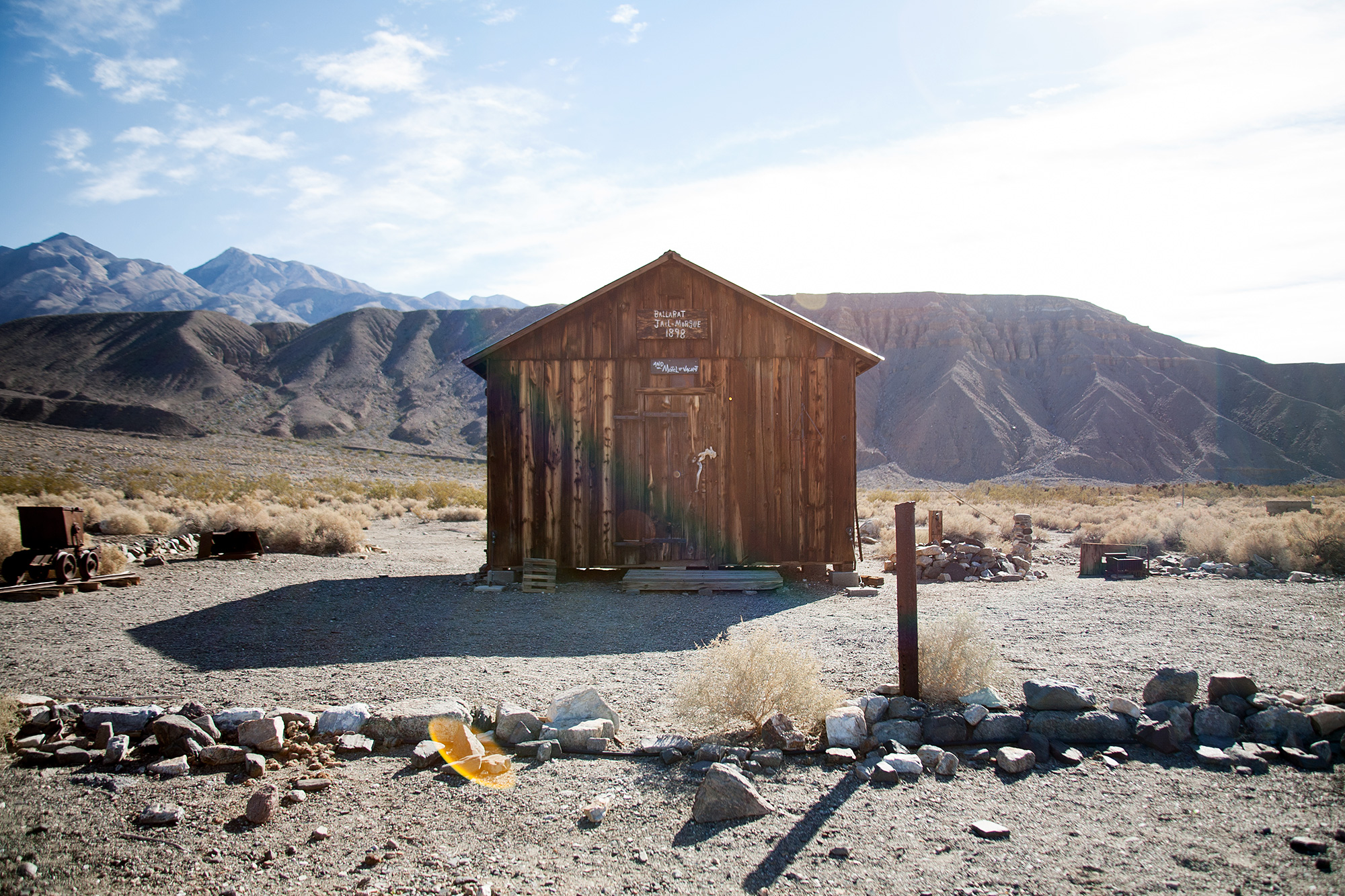 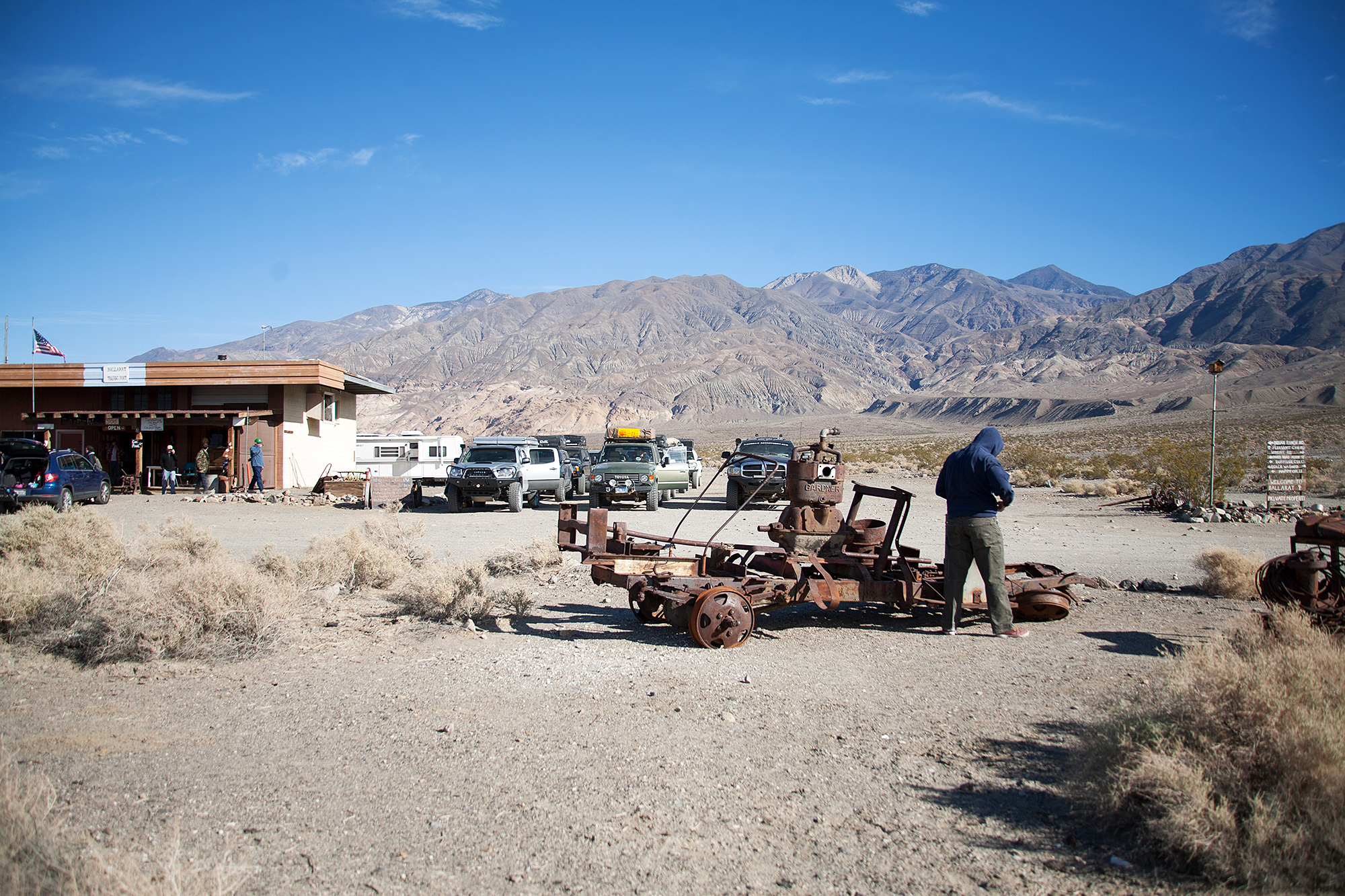 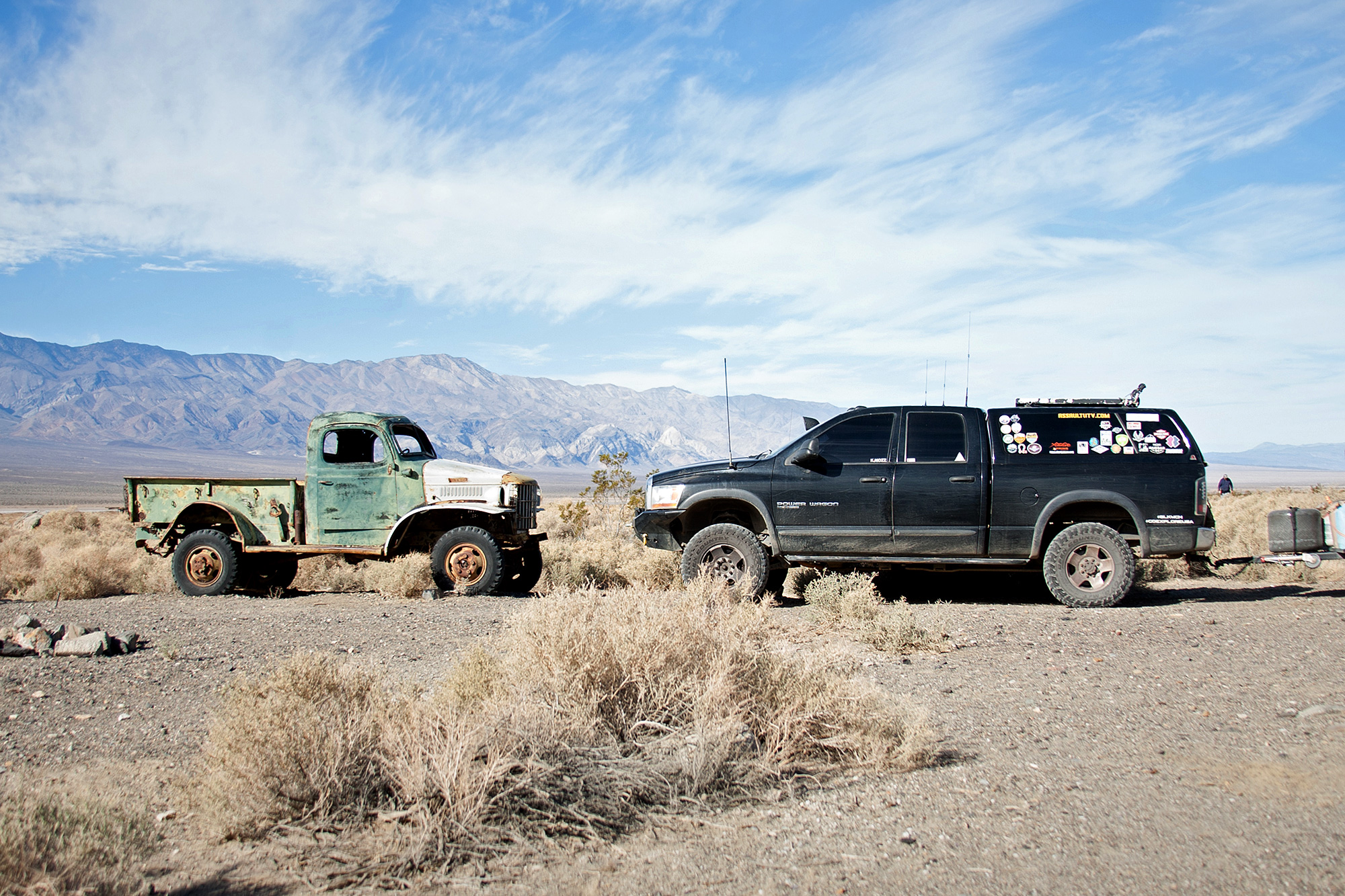 From Balarat Ghost Town we headed for Barker Ranch. The path to Barker Ranch was so well hidden by the natural landscape that if there weren’t signs pointing the way you could easily miss it. We ran a road along the base of the mountains, then suddenly turned to drive right into them. Noticed I didn’t say up the mountain, I said into them. This small path, Goler Wash, ran between two steep hillsides disappearing into the mountain. We followed the wash to Barker Ranch, the view was amazing. 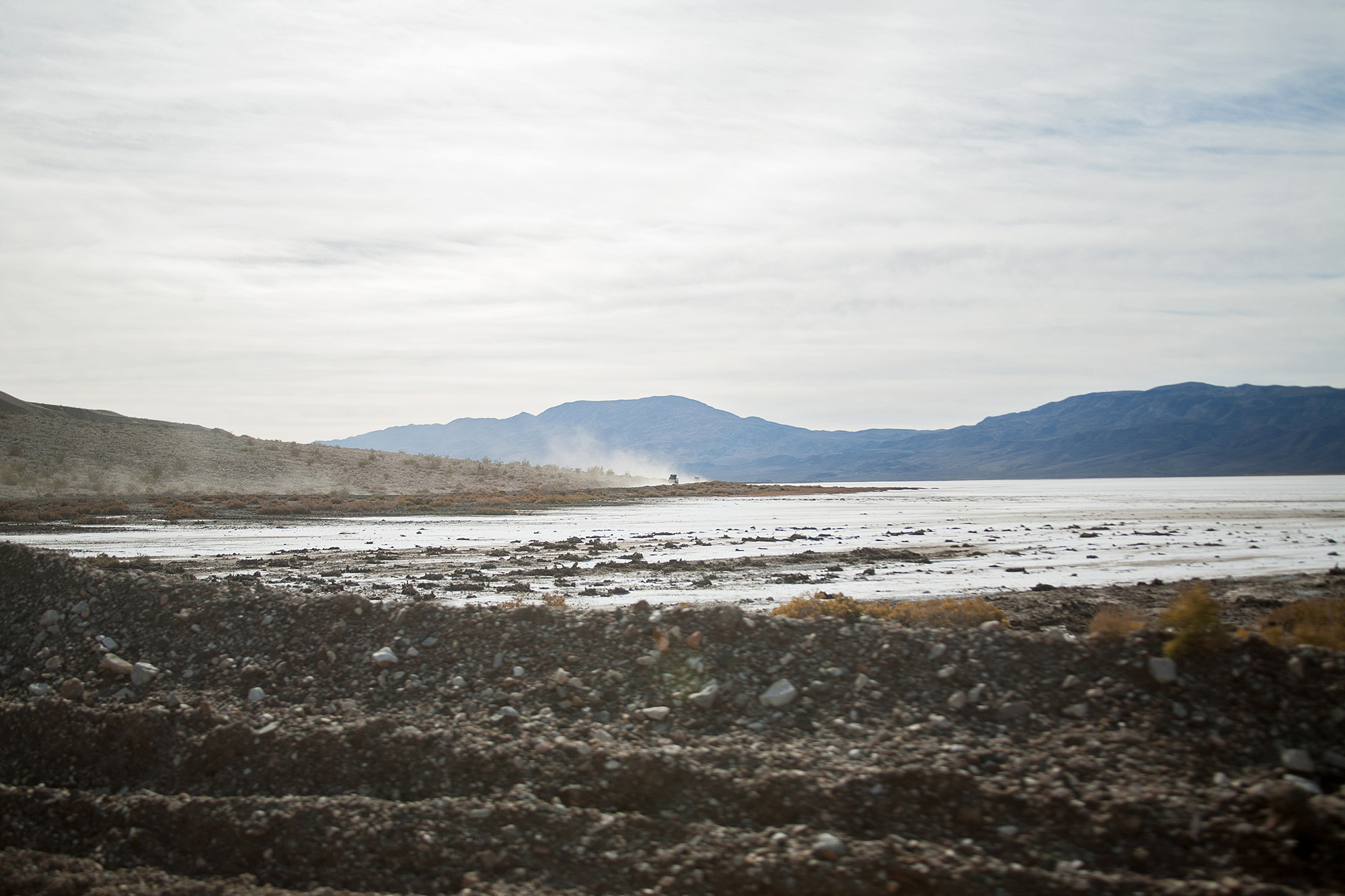 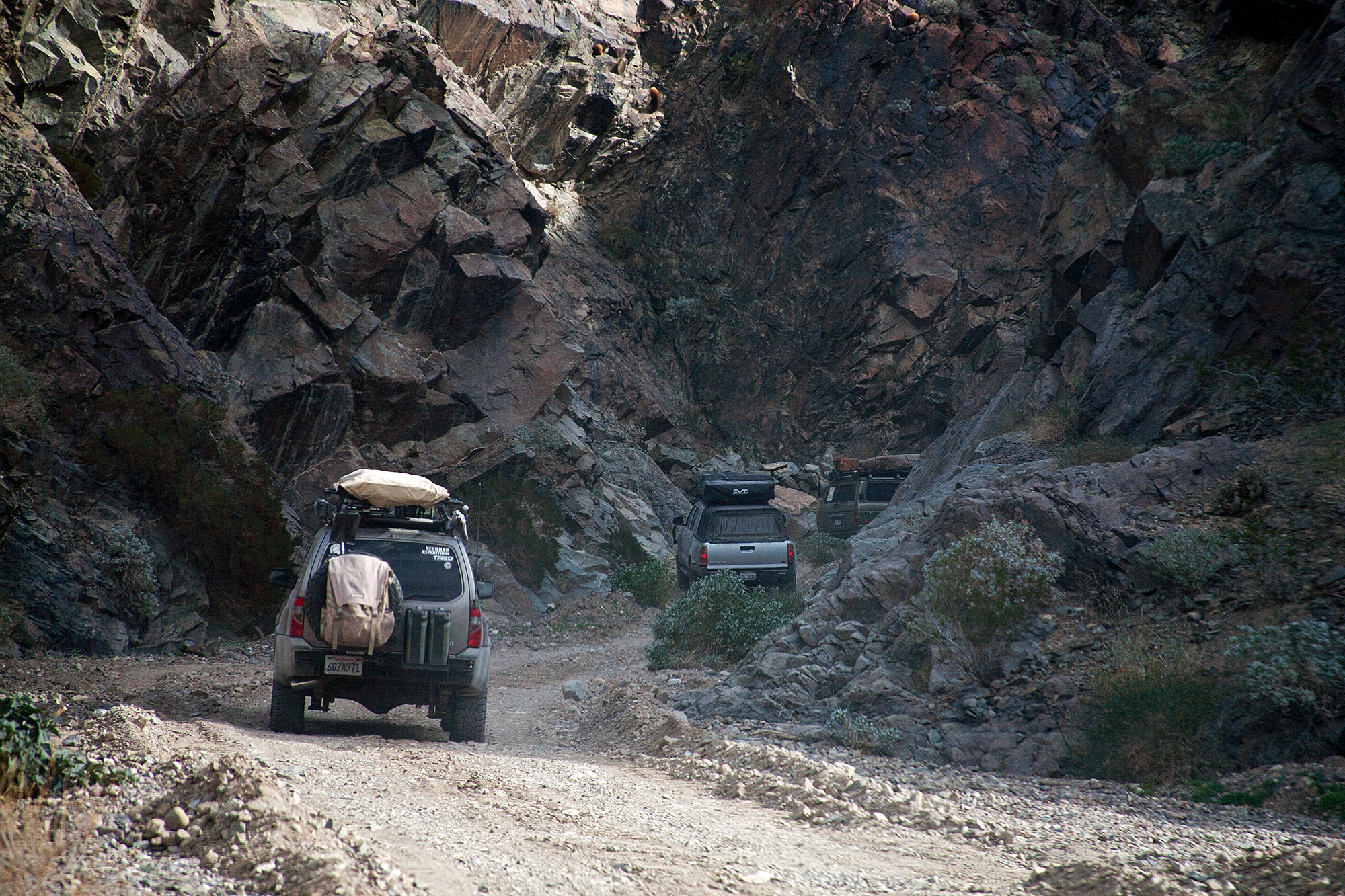 Barker Ranch was built by some recreational ranchers who just wanted to get away. It was then purchased by Bluth and Helen Thomason in the 1930s. In the 1940s a stone cabin was built, water was brought to the property by a spring, and electricity was generated by a windmill. In 1955 the Barkers purchased the property and expanded it further, then between 1968 and 1969 Charles Manson and his “family” occupied the ranch. They were arrested from the ranch for vandalism. Shortly after the arrest the pieces were put together that they were actually murderers. The site was burned down accidentally by some careless campers in 2009, and the stone structures are all that remain. It’s a sight to see, and I would rate this as a high on the list of must sees if you venture into Death Valley. 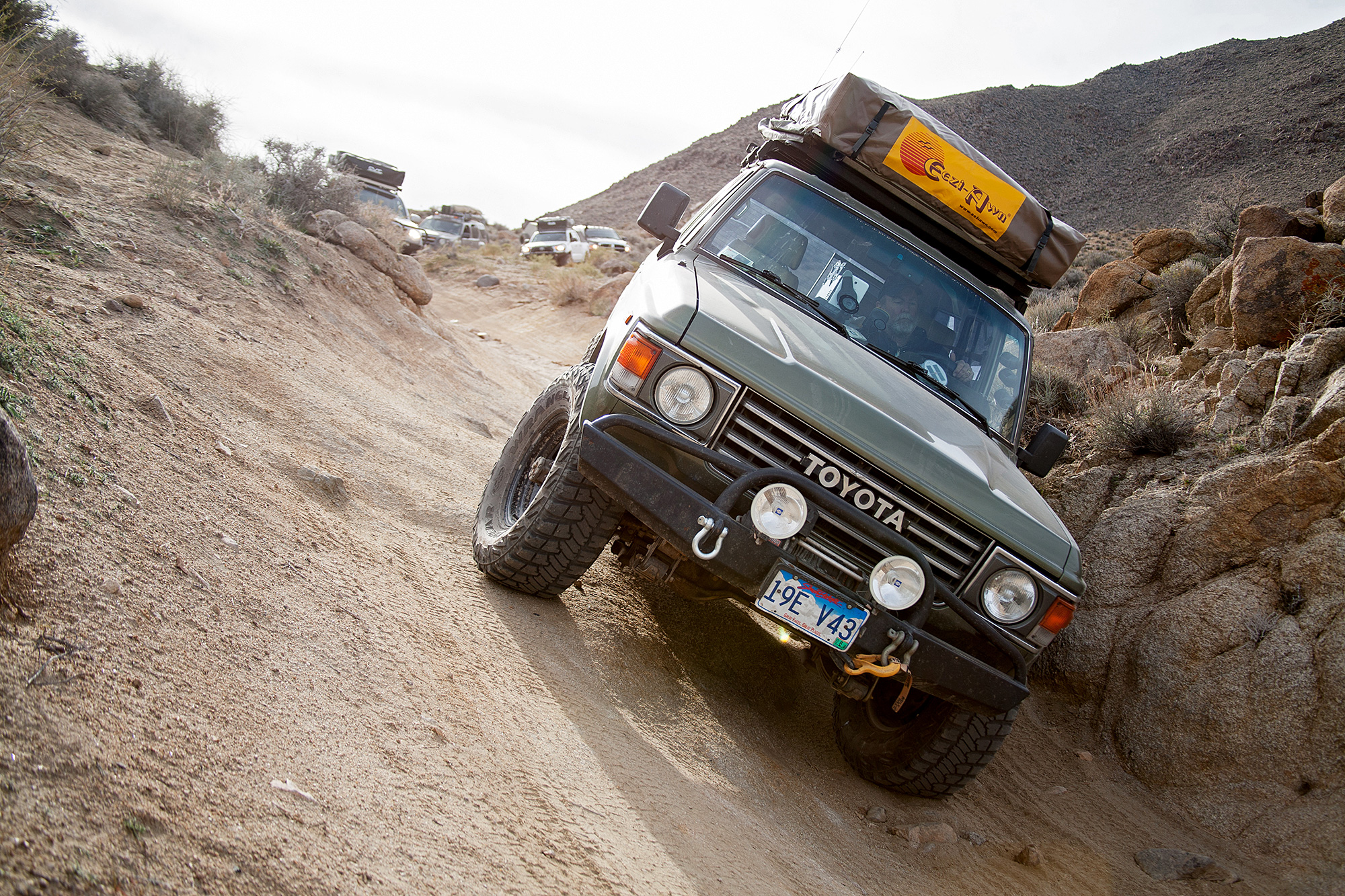 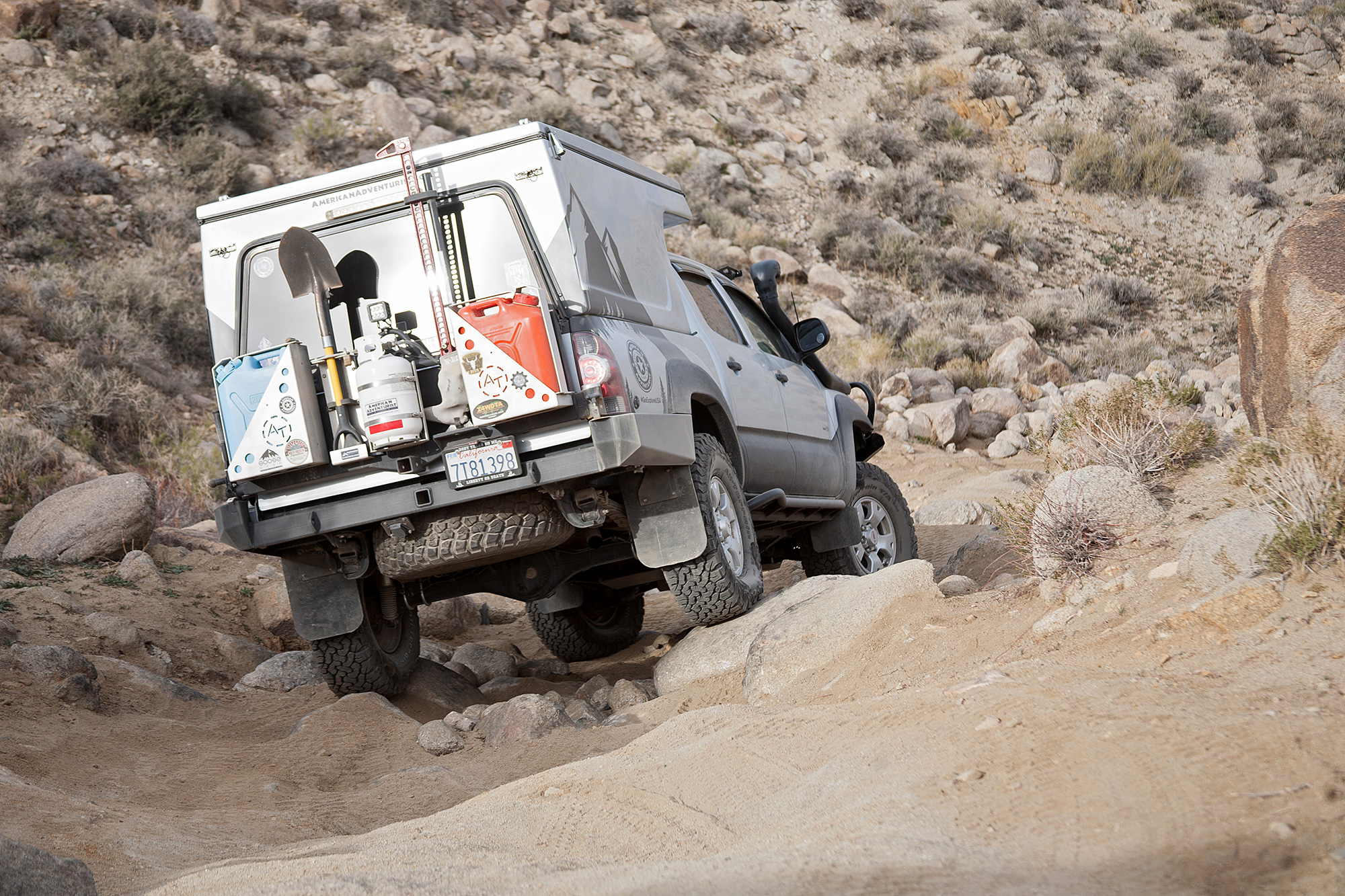 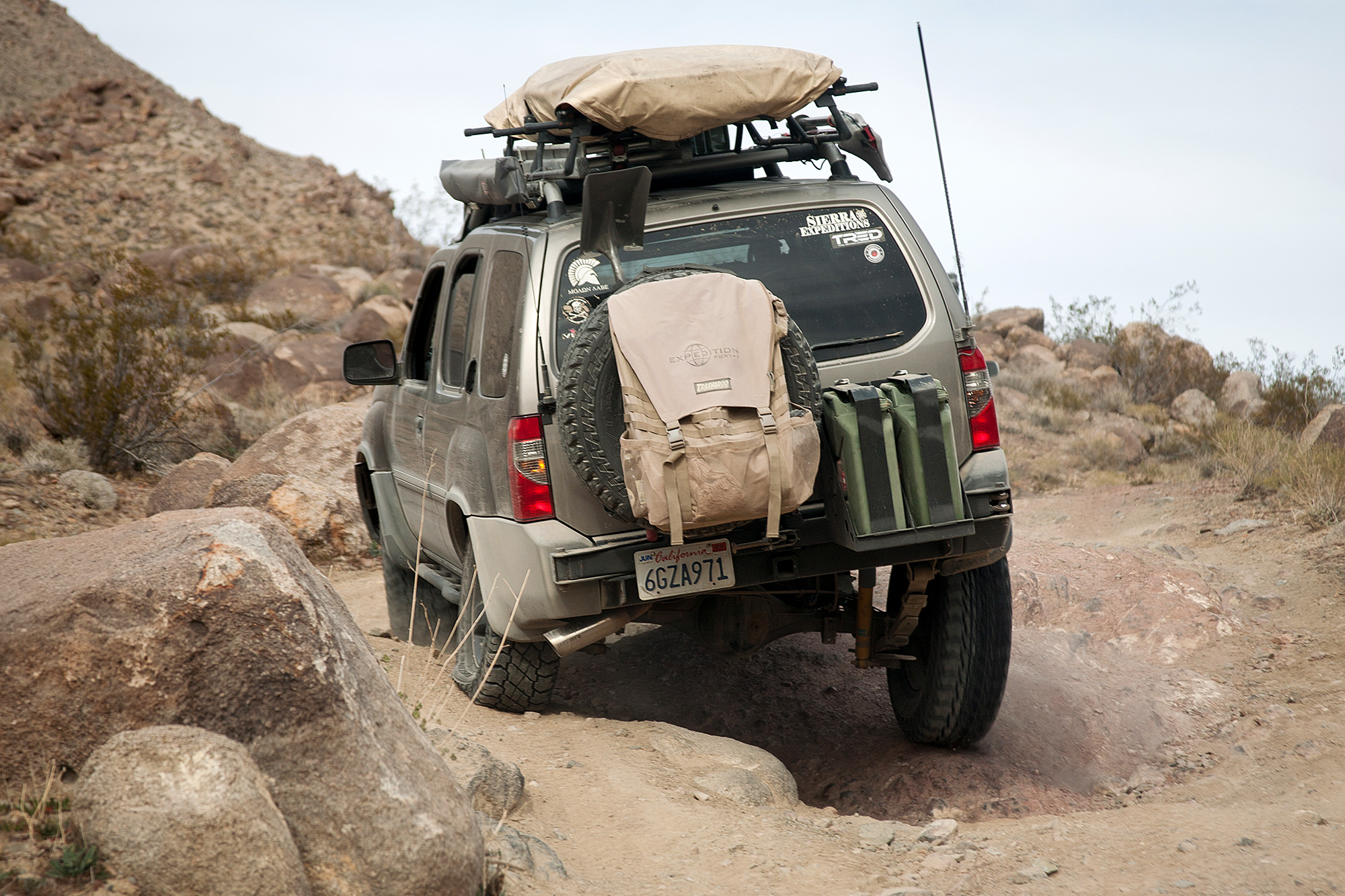 After departing Barker Ranch we continued up Goler Wash to Mengel Pass. We would follow Mengel Pass to Striped Butte Valley and camp for the night. We did hit some semi technical sections, always a bonus in my book. All the vehicles in this group were well outfitted and made everything we ran across look easy. In Striped Butte Valley we made our way towards the geologist’s cabin with hopes of camping there for the night. We scored big time as it was vacant and we got to the cabin about 15 minutes before another group. 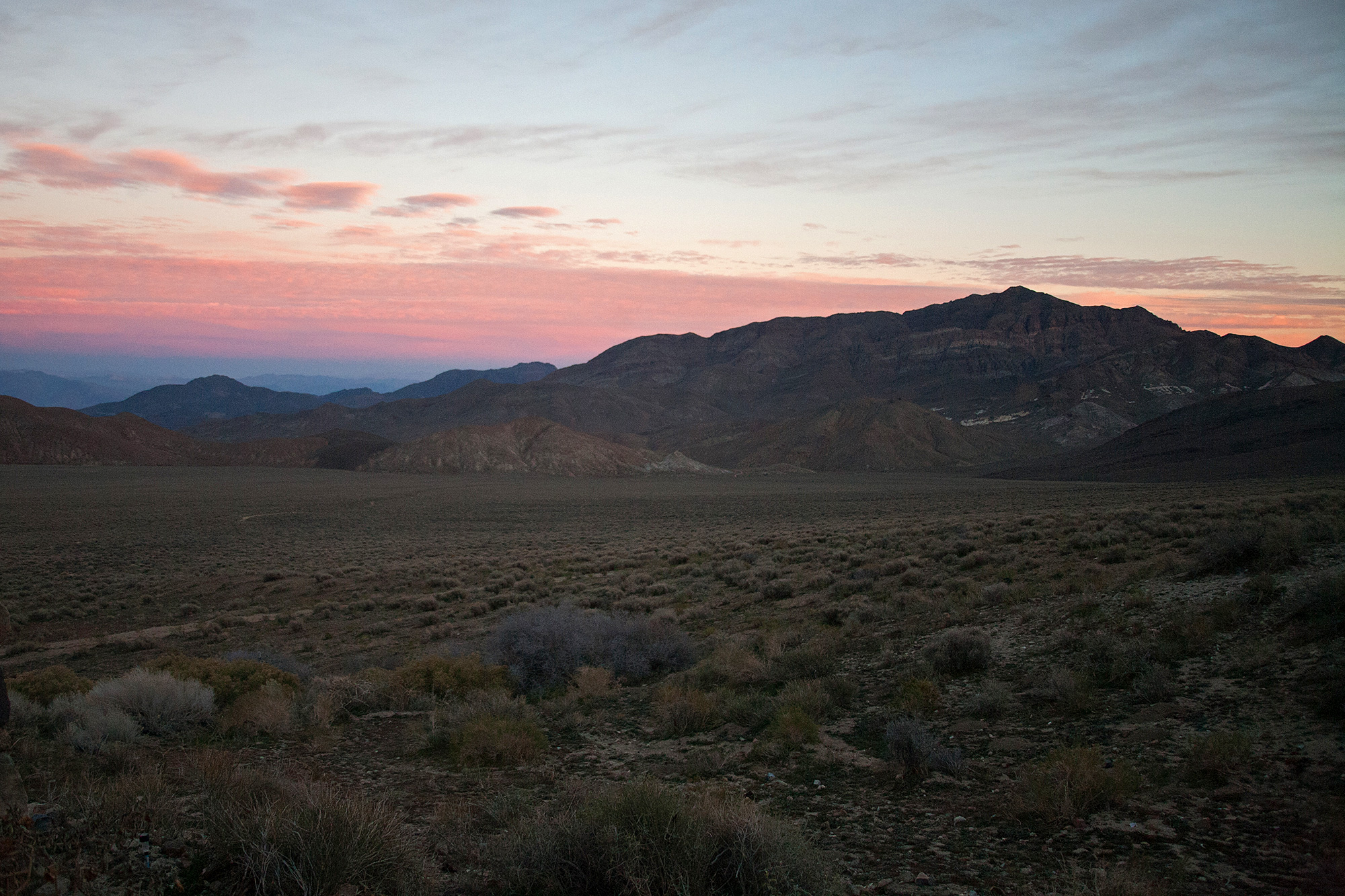 The geologist cabin is a small cabin built by Asa Russell when he first started work on his nearby claim. It is at the base of Manly Peak in the Panamint Mountains. One of the really neat things about the cabin is that it is well maintained by everyone that uses it. Visitors leave supplies such as wood, water, toilet paper, and matches in case anyone finds themselves in need. The geologist cabin is backed into a hillside and overlooks the Butte itself, making for some excellent pictures. 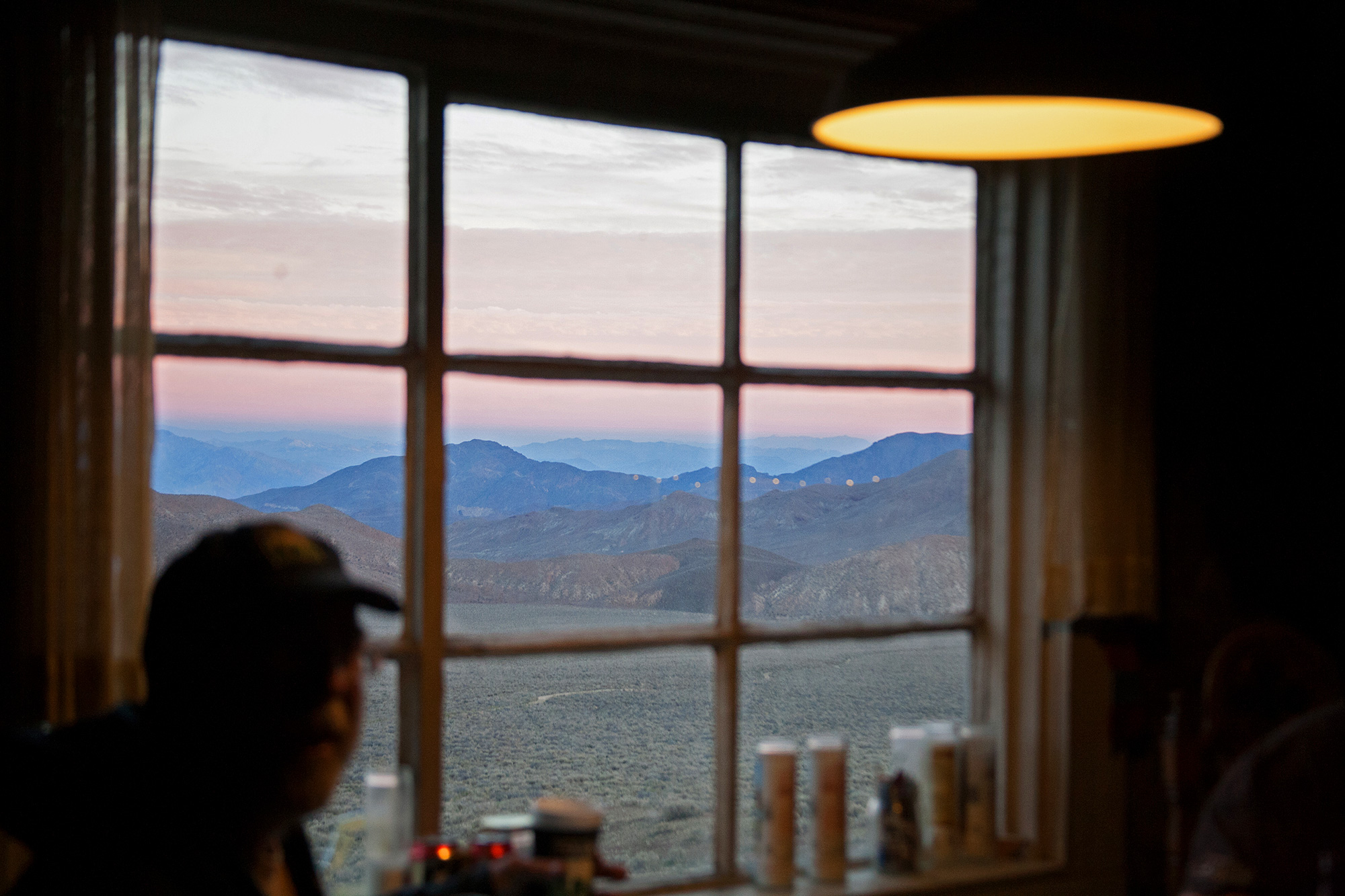 The fireplace was used for our nightly fire and it was Jacki’s night for the appetizers and cocktails. Appetizers consisted of prosciutto, salami, pancetta, cheeses and crackers. A couple jars of shine to mix with ginger ale were the cocktails for the night. The habanero jack cheese and shine were a hit, as always. After the appetizer and cocktail hour, everyone cooked their meals in the cabin. 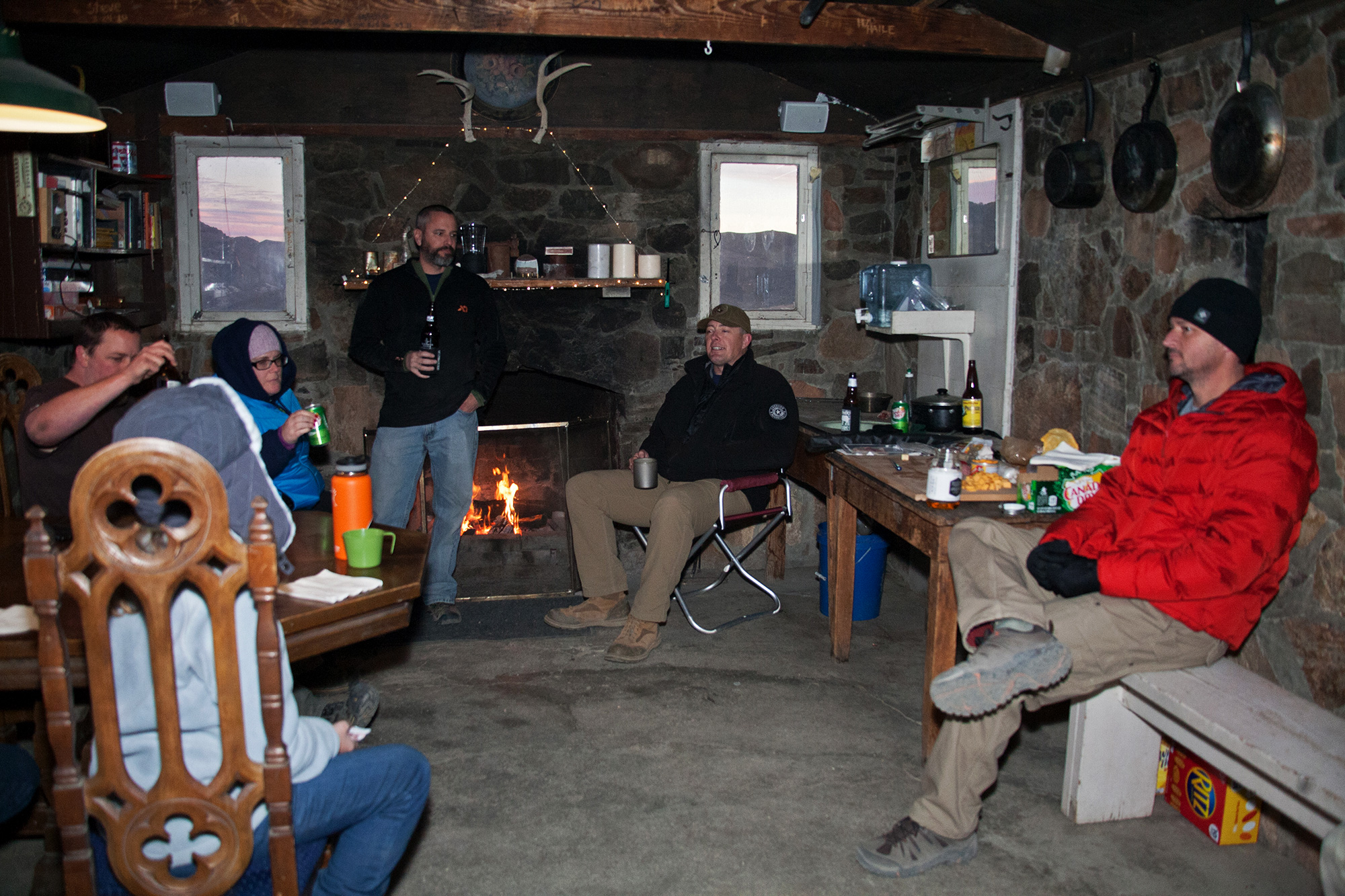 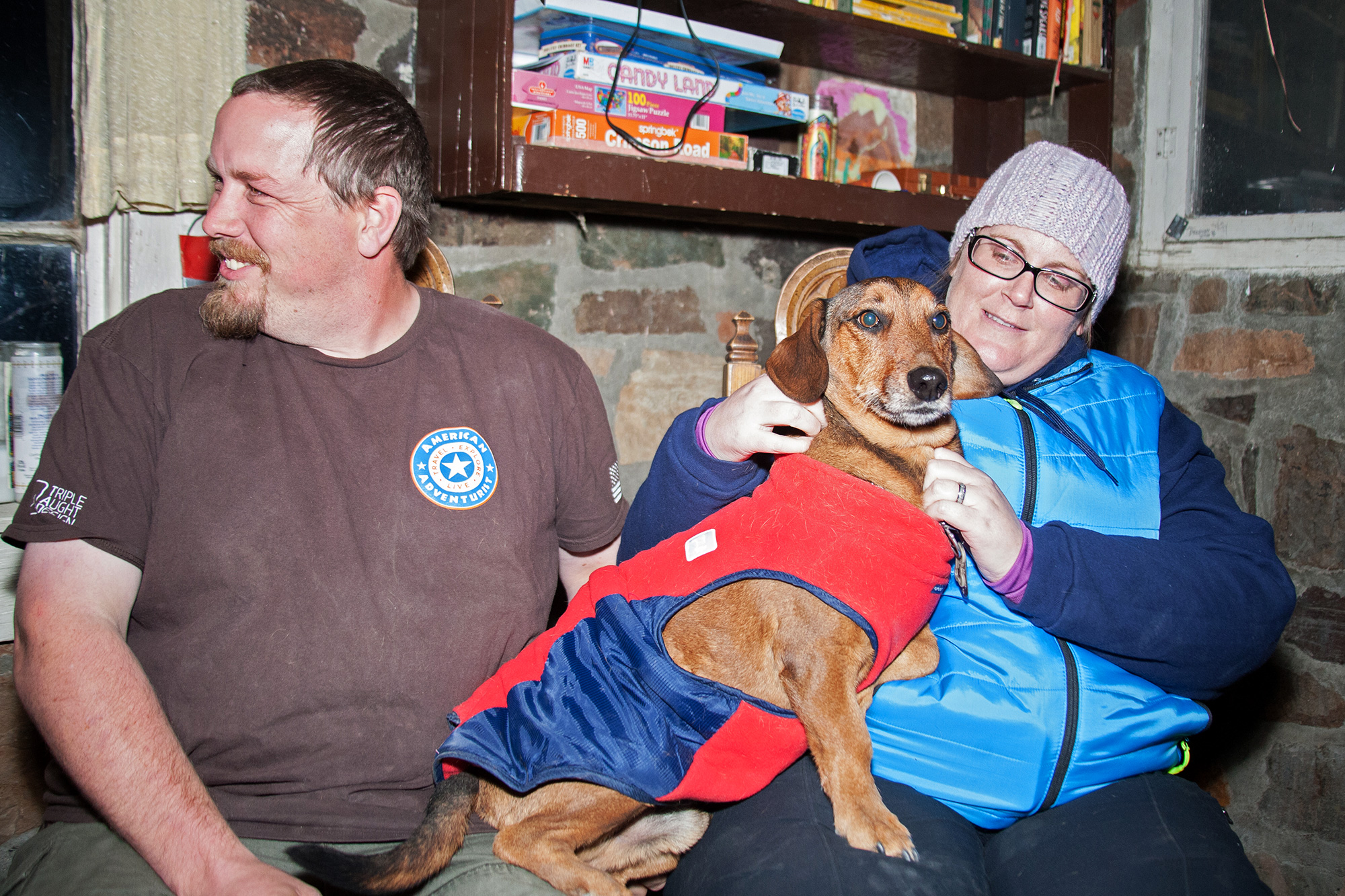 The cabin had electricity due to a solar panel and battery setup someone installed. It also had a way to plug in an iPod so we could play music. A lot of fun was had that night. Stories, jokes, and typical good fun harassment was had by all. After a long day and fun evening it was bed time, the drivers meeting would be bright and early in the morning.

The geologist cabin is a great camp and highly sought after. We did have an unexpected visitor or two in the middle of the night. A couple of wild burros that came into camp and started braying. Thankfully, a short time later they moved on, because they were not quiet!