There’s a new way to inflate a sleeping pad, and it’s called the SpeedValve.  We all know of the traditional way to inflate a sleeping pad:  Unscrew the pad’s valve, wrap your lips around said valve, and start puffing.  Depending on the volume of the pad that you’re inflating, this may take just a minute, or it may take several minutes and leave you feeling slightly hypoxic by the time your pad is fully inflated.  However, if you have a Therm-a-Rest pad equipped with a SpeedValve, such as the NeoAir XLite Max SV, inflation and deflation happen a whole lot faster. 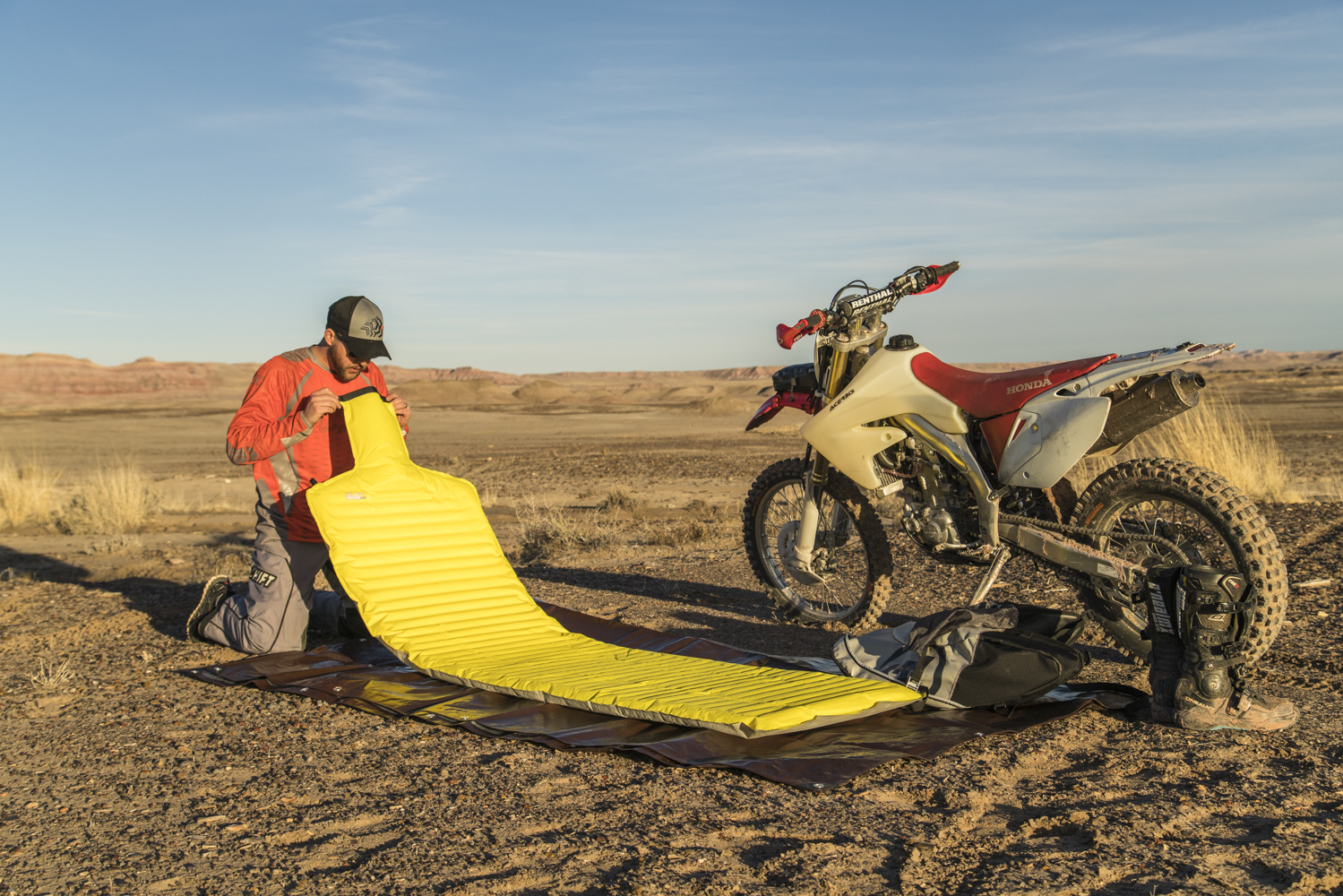 The SpeedValve uses science (Bernoulli’s principle of fluid dynamics) to inflate your sleeping pad much faster than a traditional sleeping pad valve would allow.  With a traditional valve, you are supplying 100% of the air going into the mattress from your lungs.  The SpeedValve uses all of the air from your lungs and it draws additional air from the atmosphere into the sleeping pad.  The end result is that much more air goes into the pad per breath, and your pad inflates faster.  Once you’ve got the pad almost full, you close the SpeedValve just like a drybag, and use the traditional valve on the corner of the pad to dial in your desired pad pressure.  Deflating a SpeedValve pad happens much more quickly than with a traditional pad valve too, and the days of slowly rolling a pad up as you bleed out air are over.  The SpeedValve is awesome, but it does have a learning curve. 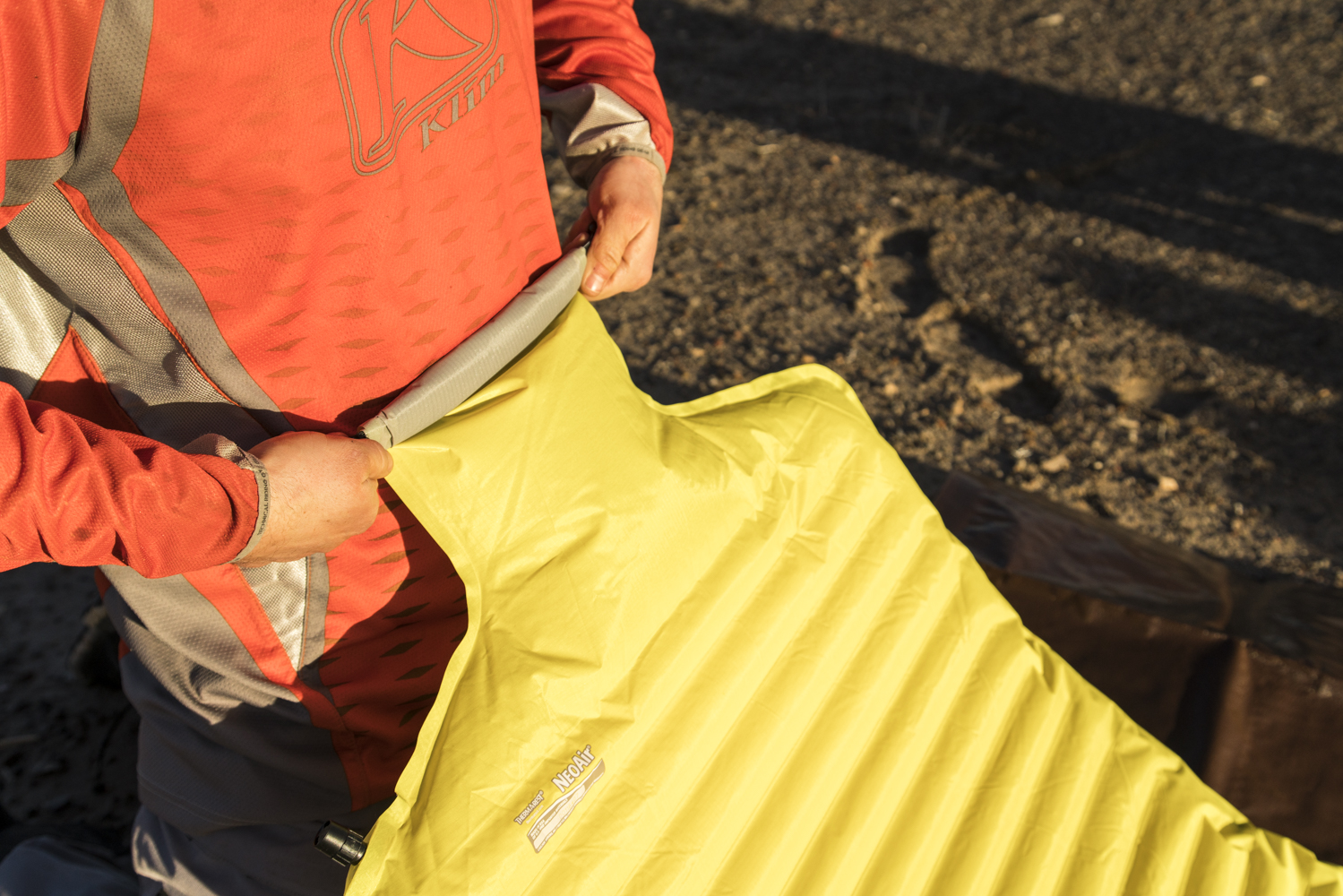 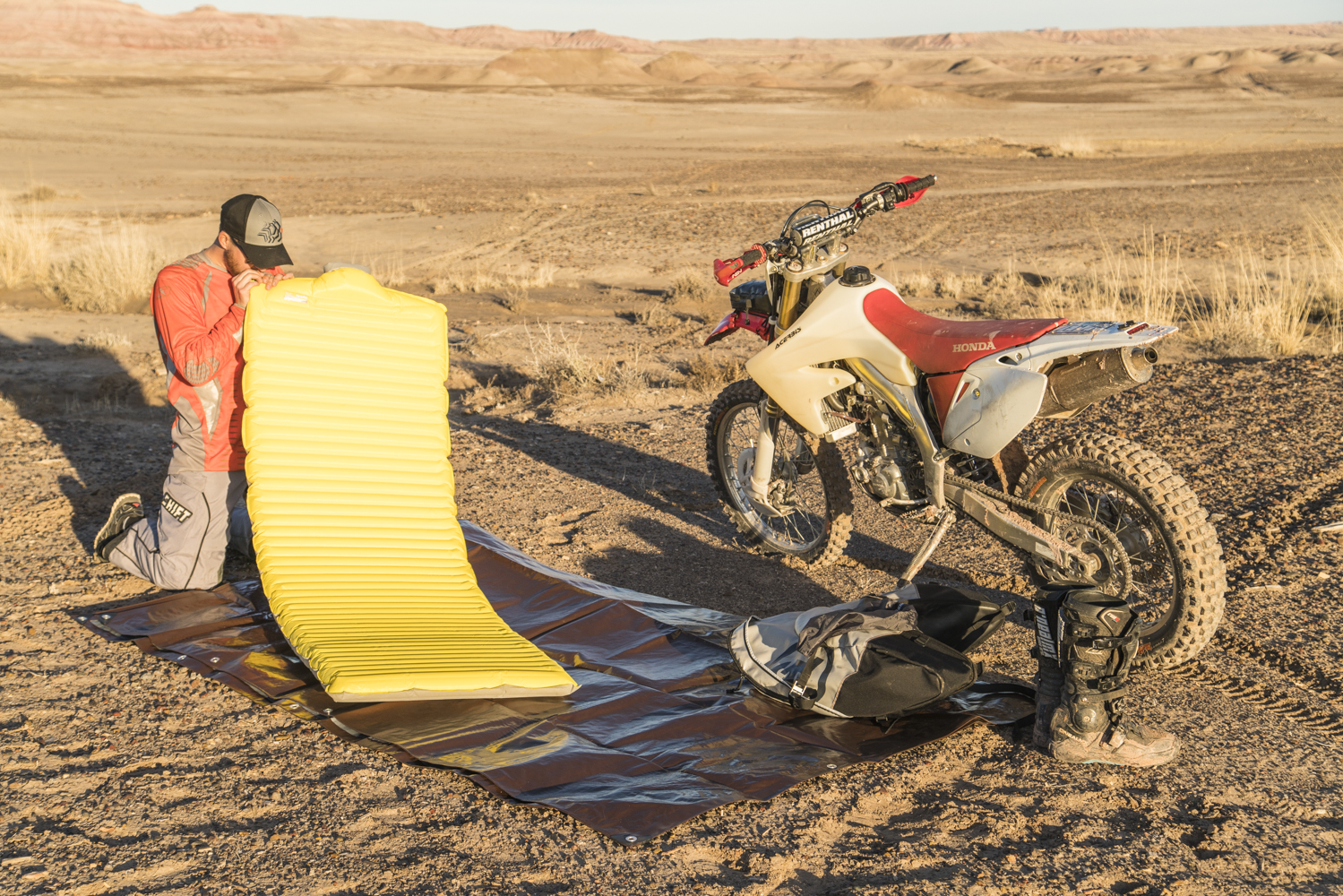 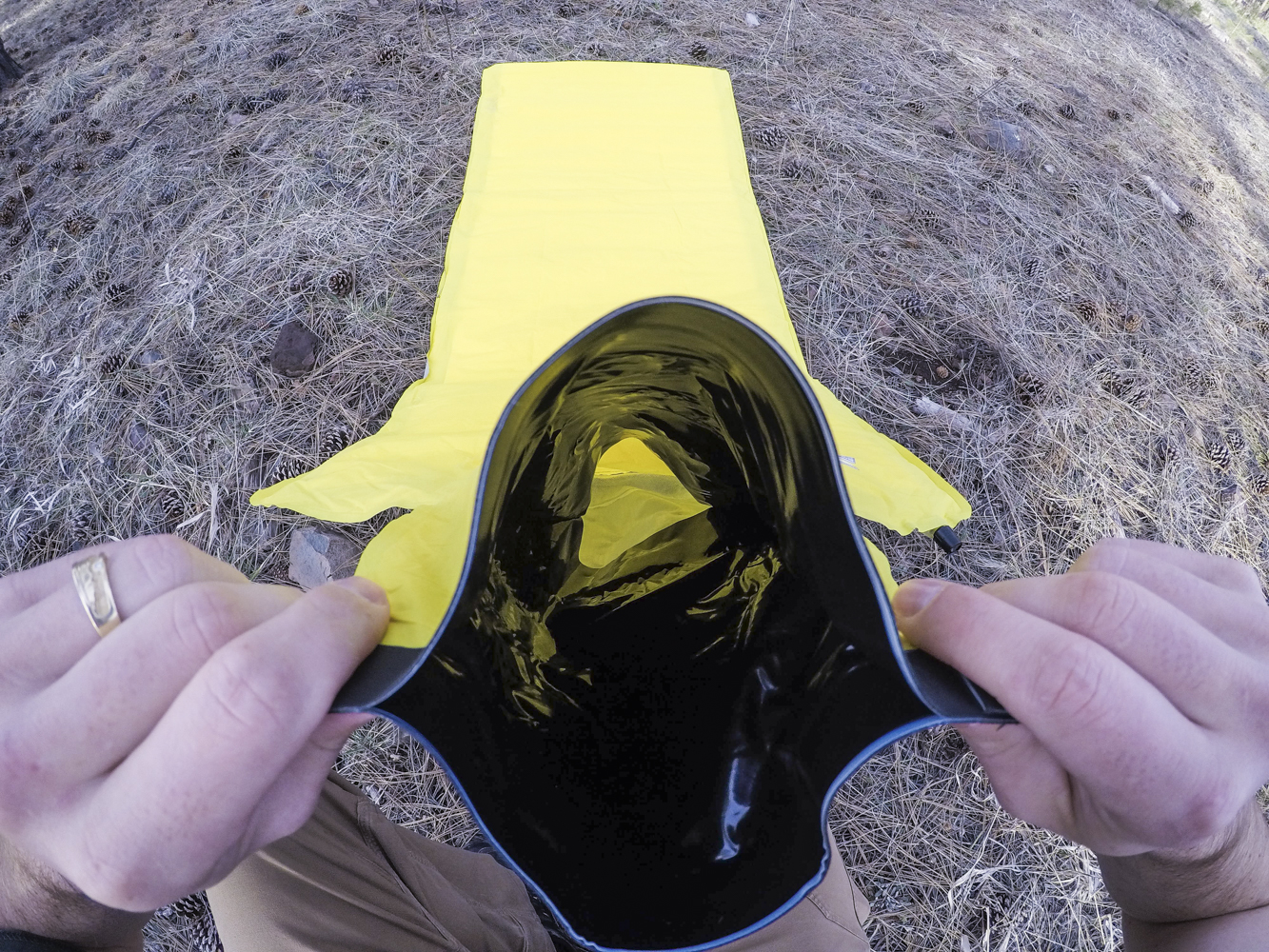 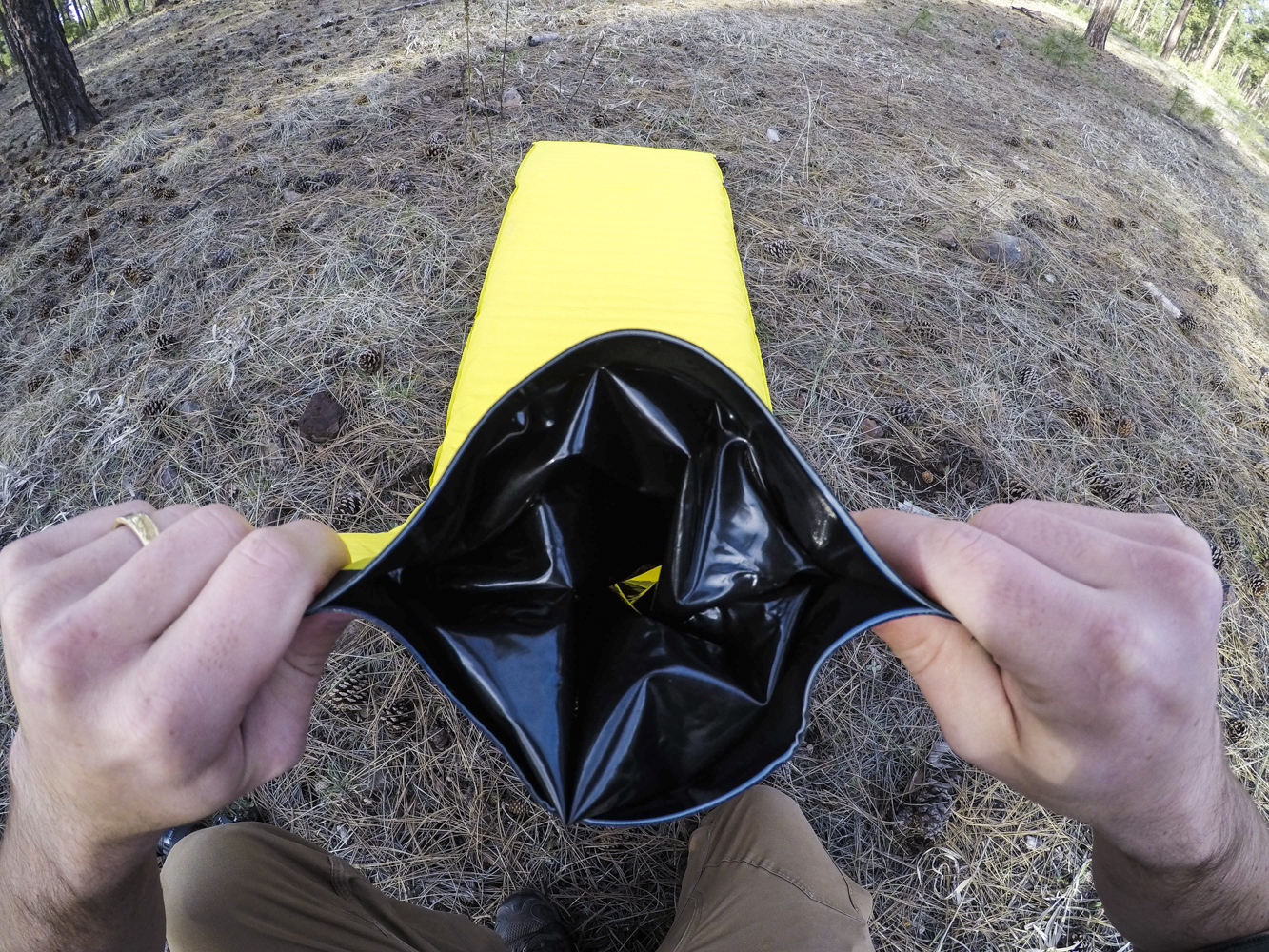 Entertaining situation: Ask your friends to try inflating your NeoAir XLite Max SV without telling them how to use the SpeedValve.  Some people will try and blow as hard as they can into the pad, like they’re playing toot the bottle.  Others will just stick their face into the SpeedValve and blow.  When you’re ready to enlighten your friends, hold the SpeedValve a few inches away from your face and blow slowly, like you’re trying to blow out 100 candles on a birthday cake in one breath.  You’ll know when you’ve got your technique dialed because you will feel air moving past your face as you blow, and your pad will inflate surprisingly fast.  Closing the SpeedValve is the other thing that requires technique, as the dry bag style rolling process must be done right, or you’re going to be waking up on the ground.  As with any new piece of gear, the SpeedValve takes some learning, but once you get it figured out you’ll feel bad for folks who still have to work with traditional valves. 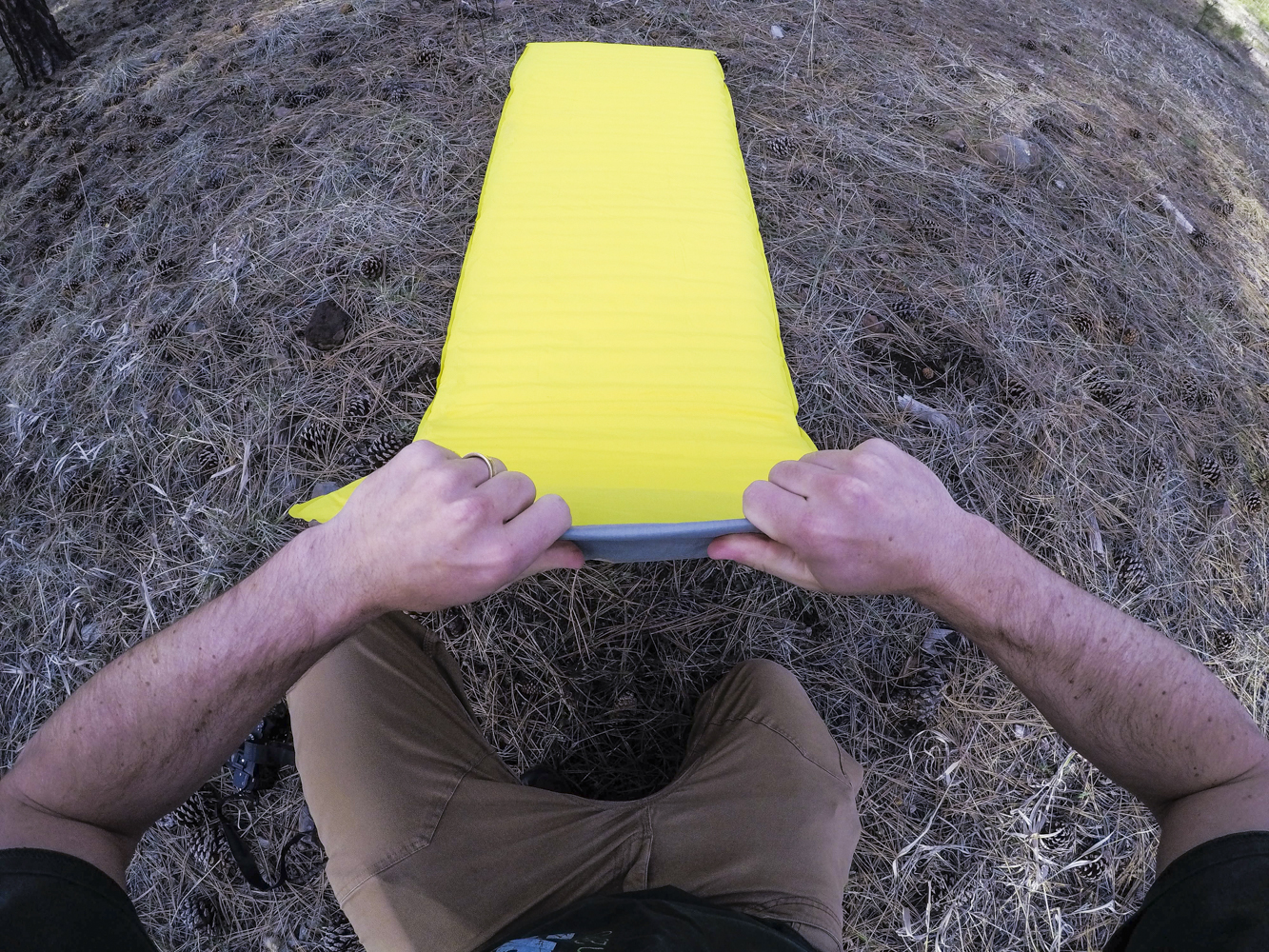 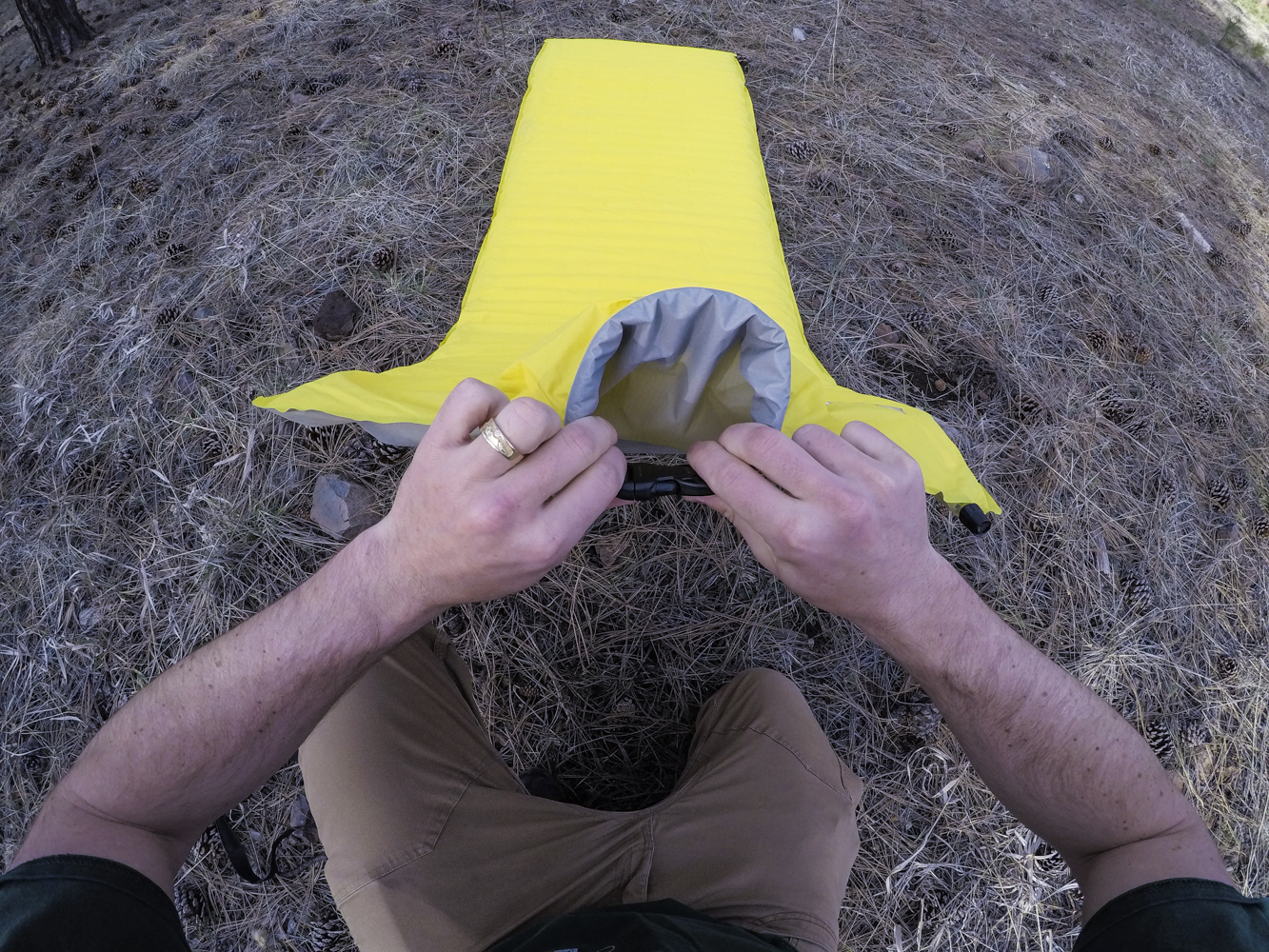 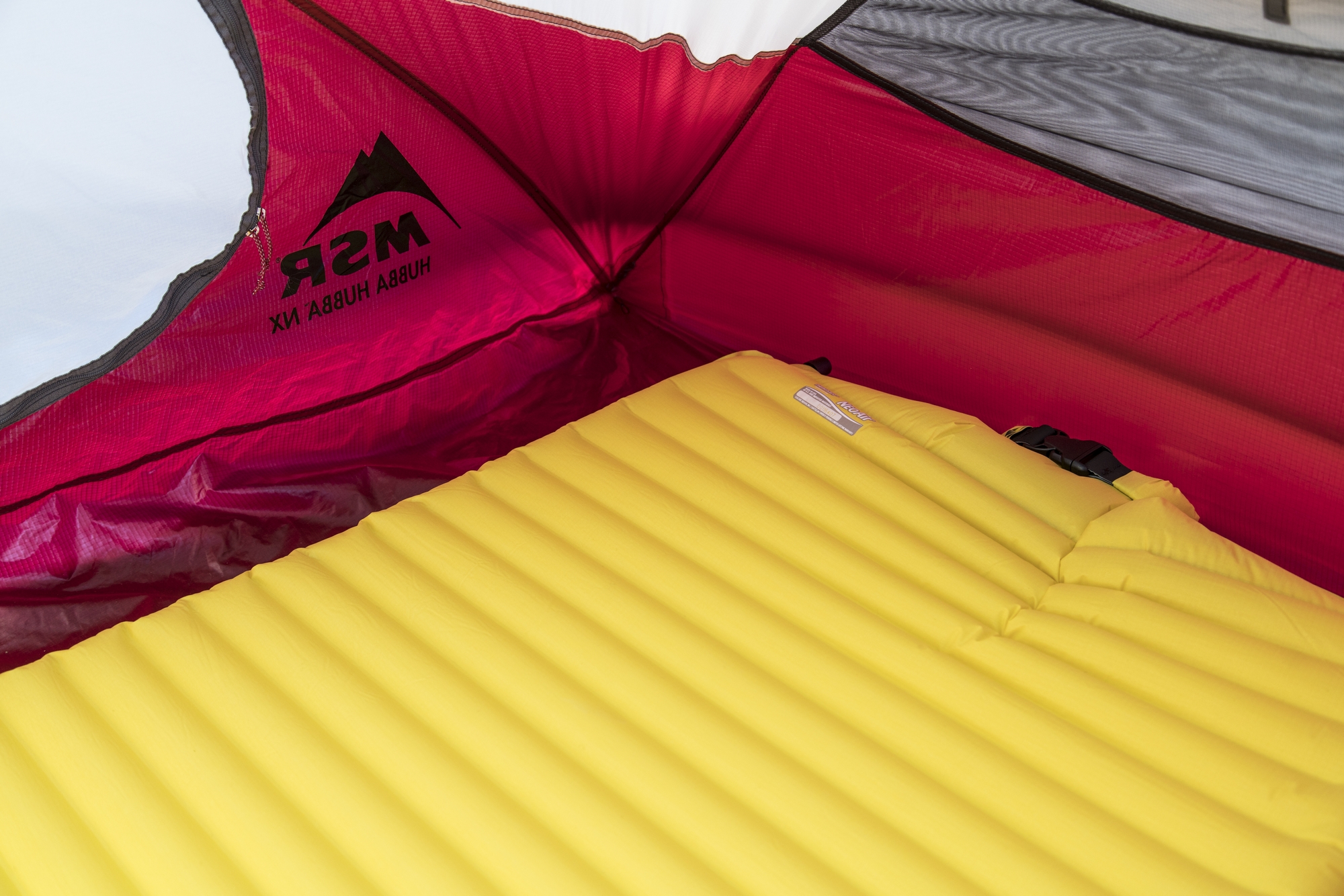 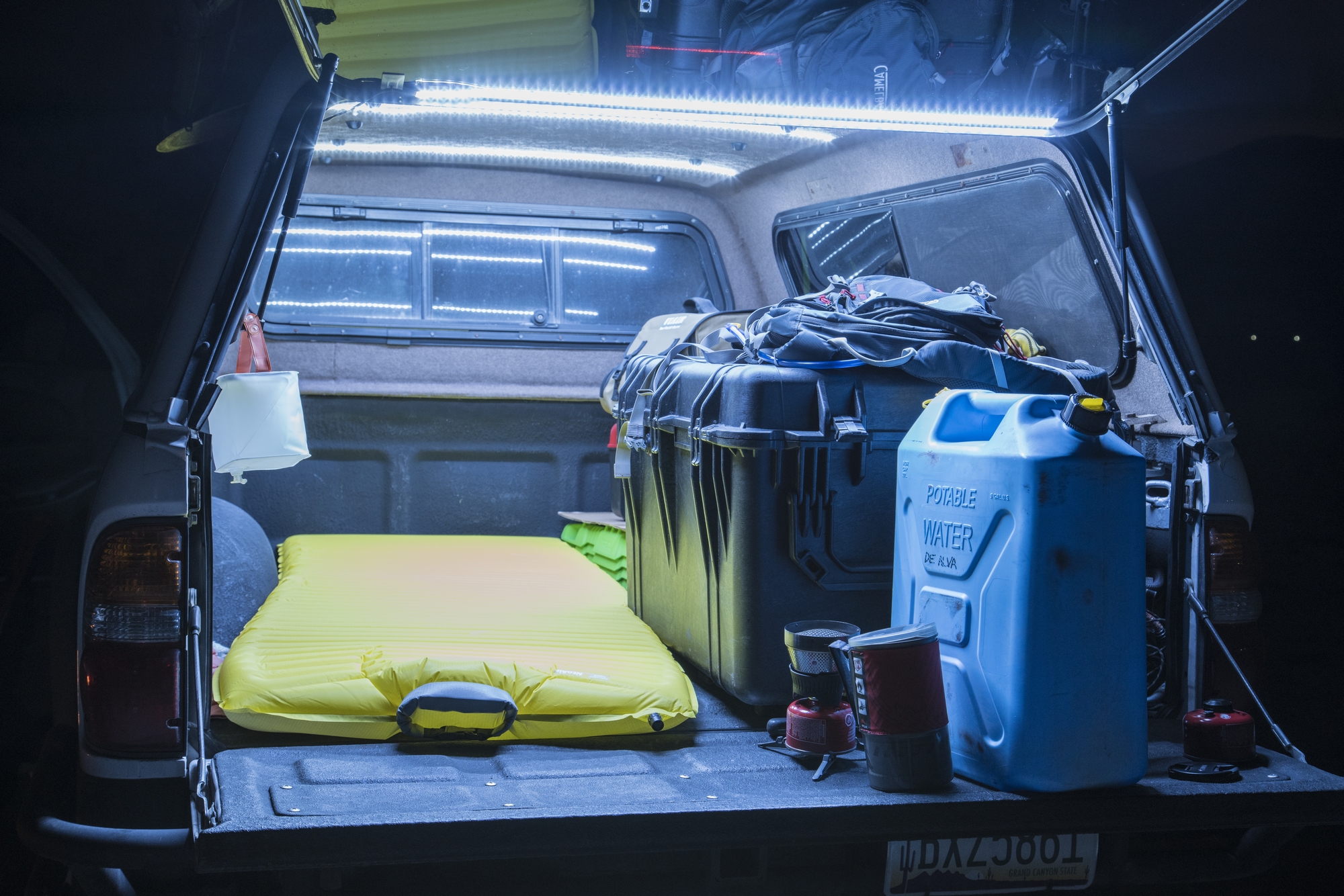 The NeoAir XLite Max SV is a terrific sleeping pad in terms of comfort, and with the L size pad weighing in at one pound five ounces, it’s become my go to pad every time weight is a consideration.  The L size allows for my 6’2” frame to stretch out with my entire body on the pad, and at 2.5” thick I can sleep on my side without contacting the ground.  With an R value of 3.2, the NeoAir XLite Max SV is a three season pad that will make a bit of noise when you move around on it, but it’s much more quiet than the ‘crunching bag of chips’ sound that other lightweight sleeping pads are known for.  Every night I’ve had on the NeoAir XLite Max SV has been a night of restful sleep. 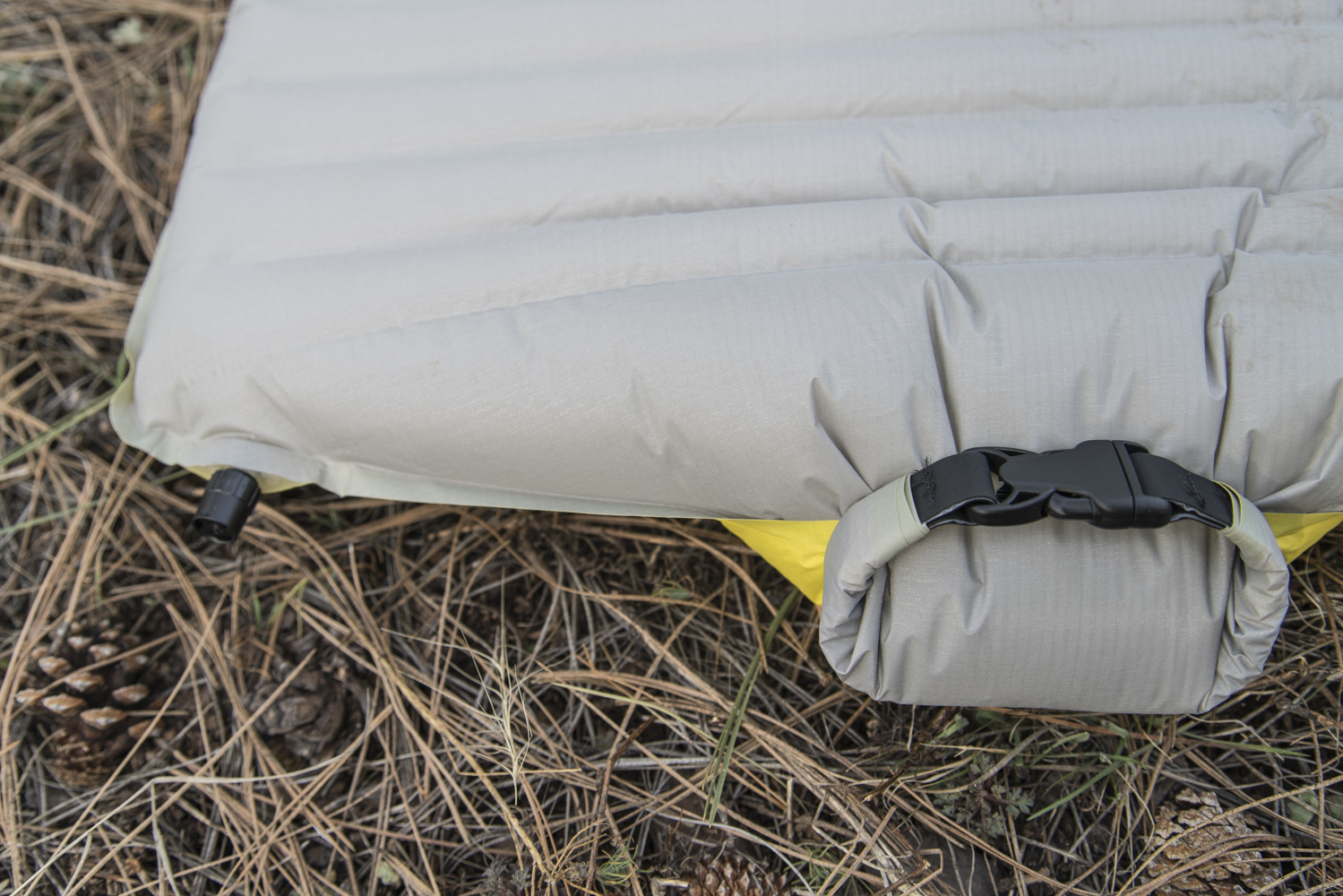 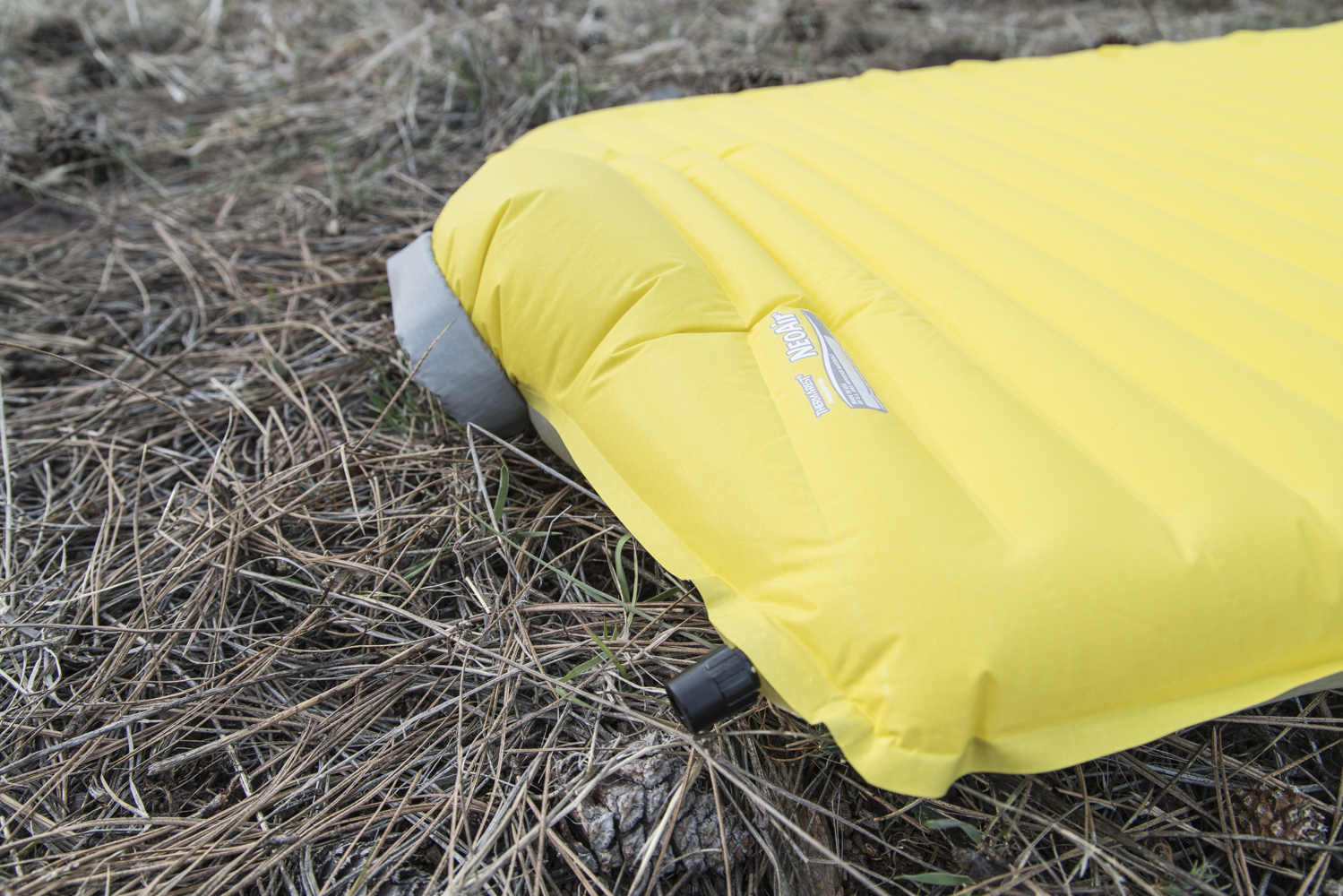 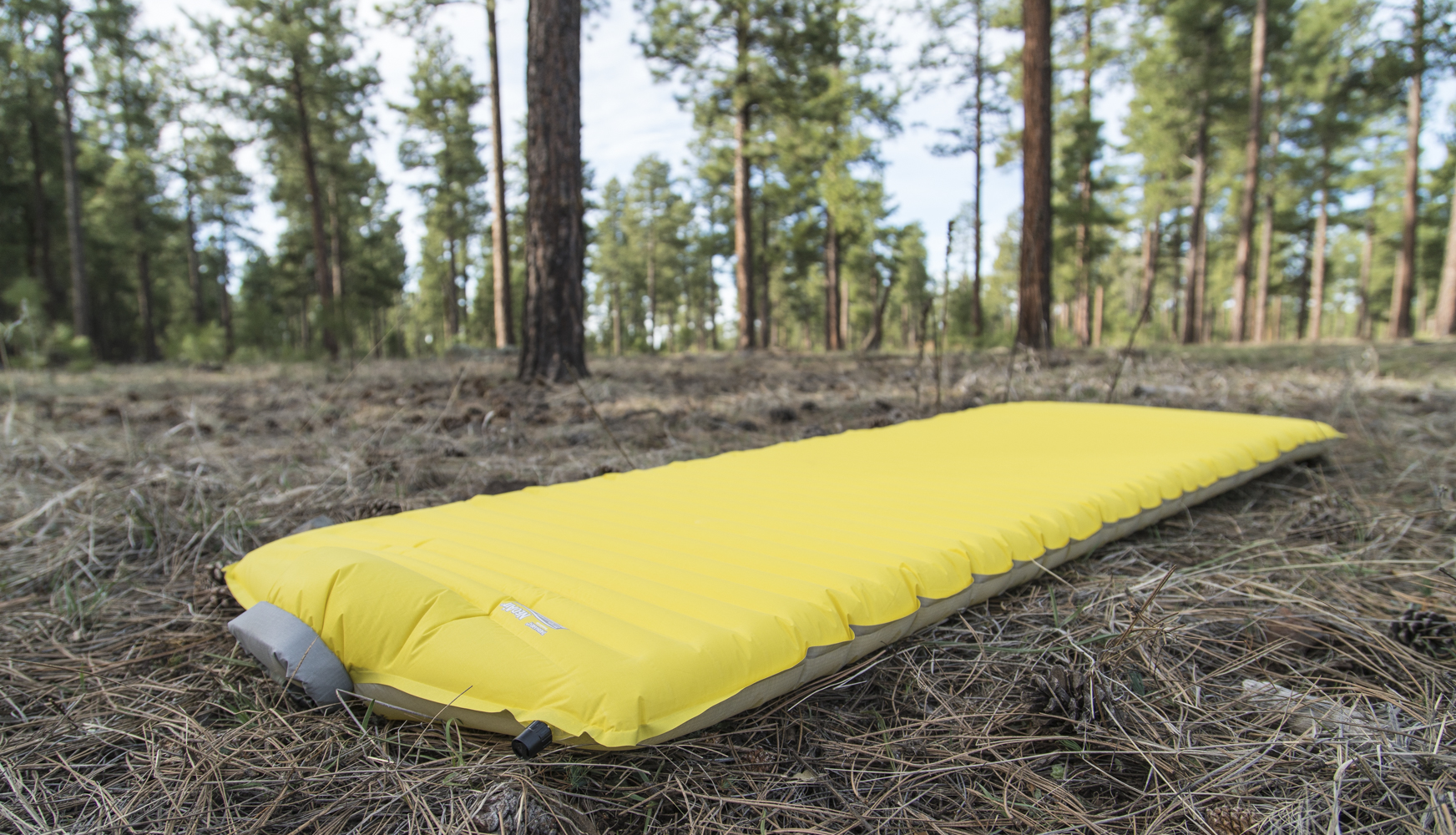 Therm-A-Rest has applied science to give us a new and faster way to inflate and deflate a sleeping pad, and I have to say that I’m a fan of this new system.  Granted, there is a bit of a learning curve and the second valve is technically one more point of potential failure, but these points are overshadowed by the performance the SpeedValve offers.  Less time inflating a pad is a convenience feature, but the first time you nail the inflation technique you’ll find yourself saying “worth it!”  Likewise, deflation is a much more enjoyable experience too.  No longer will you spend time doing the slow knee-press roll-up of your old sleeping pad.  Comfort and support have been outstanding for me sleeping on my back and my side, and a good night’s rest in the backcountry is invaluable on multi-day missions.  I’ve routinely found myself opting for the NeoAir XLite Max SV over a thicker (3.5”) and much heavier sleeping pad that was previously my favorite.  With the NeoAir XLite Max SV, I sleep great and I’ve cut over a pound from my kit.  Therm-A-Rest offers the SpeedValve in a number of their field proven pads, so go check one out at your local gear shop, or at http://www.cascadedesigns.com/therm-a-rest