Every year, a rag-tag group of passionate Mitsubishi owners sets out for the Rubicon and Dusy Ershim trails. At first glance, people see some of the most highly modified and capable trucks around. They see these rigs tackling legendary trails. They know, regardless of make or model preference, these guys are legit.

Adventure means something special to each of us. We’re into overlanding, but that doesn’t mean we’re an overlanding magazine. That’s an important distinction to make because these guys aren’t packing roof tents and refrigerators. They’re packing coolers and cabin tents. While it’s easy to spot our differences, one of our goals at Adventurist Life is to help each other find common ground. The overlander and the rock crawler may be different animals, but we all appreciate the path less traveled.

Some paths are less traveled than others.

Every year, the AZ Crawlers head north to put their [often daily driven] Monteros and Mighty Maxes to the test. Their destination: The Sierra Nevadas, home to some of the most demanding 4WD trails in the United States. Adam, (aka: Toasty) is heavily involved in planning these trips. Let’s hear about the realities of these adventures in his own words.

You’ve been running “Sierra Carnage” for years. How’d it get such a frightening nickname?

The Sierra Challenge gets its nickname from a string of disastrous trips in the mid 2000’s, mostly due to ill prepared/maintained vehicles (starting with a 4Runner that disintegrated within the first 1/2 mile of Dusy). The probability of something happening with a trip like this is also a factor, due to the duration and the nature of the adventure. We’ve learned from our mistakes and do what we can to avoid problems and damage, but shit happens and we continue onward.

Damage to trucks has actually been minimal so far—mostly trucks have died en route to the Sierras, meaning they had no business going in the first place. Body damage has been minimal for the most part on trucks with proper armor (bumpers and sliders), so the vehicular damage is much the same as any off-road adventure, and it’s operator’s choice. 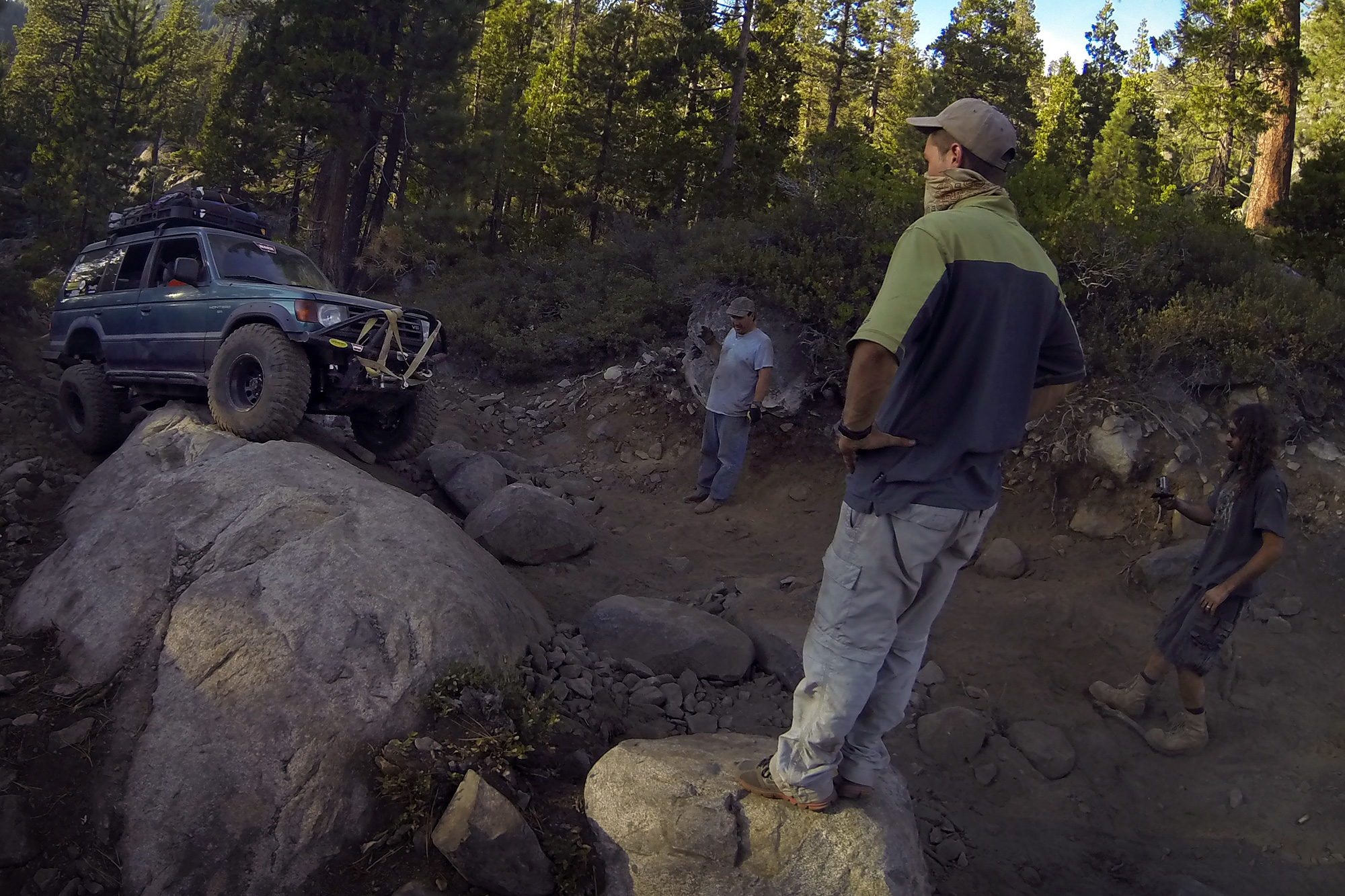 The other carnage is human. People get hurt in this environment. We walk on natural earth. It’s uneven and it doesn’t care about humans. You get out and hike around and take in the scenery. Someone will get hurt. There have been broken bones, hypothermia, dehydration and two collisions with other vehicles driving to the trail. This year, Clay slipped and broke his leg changing a tire and we were two and a half days from a hospital. When we got out we gave him the choice of going to the hospital or toughing it out for 6 more days. He chose the latter.

So The Sierra Challenge is a hardcore rock crawling run?

Honestly, our vehicles are built for overland. That’s what we are and that’s what we do. The Sierra Challenge is overlanding. The notion that we are rock crawlers comes from the terrain we have in our home state of Arizona. 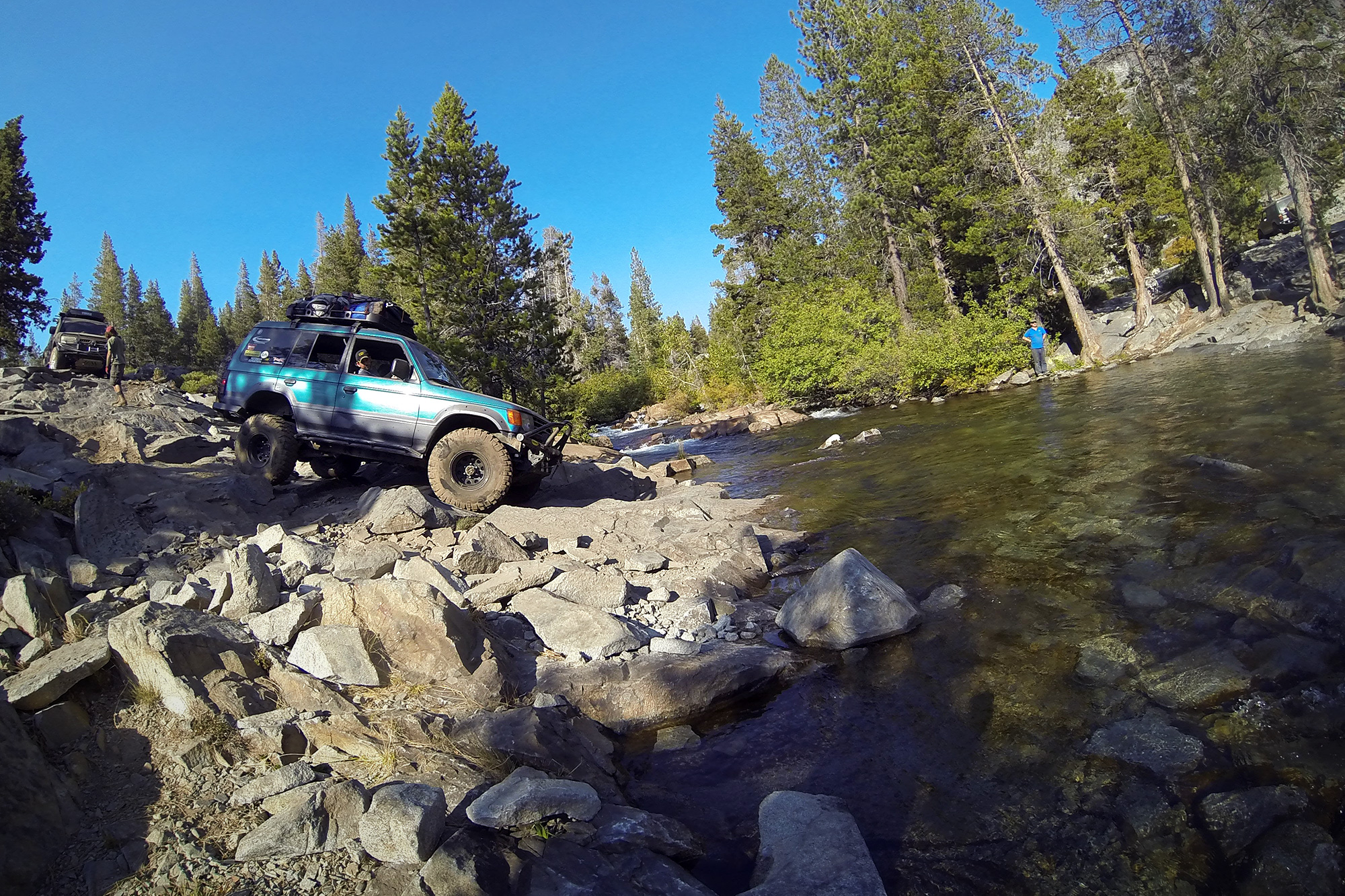 We all have a crawler or a rock setup for home, but we take different vehicles for this trip—crawlers don’t do well on this adventure. It’s 2,000 miles of highway and 60 miles off-road. We post photos of the action and, yeah, it makes it look like an all out crawl, but that’s just the highlight reel. Even at home we are using an overland setup more and more for wheeling these days.

Wait, so you consider yourself an overlander first?

Crawlers have become less practical for our uses. Most of ours sit these days because they are not as capable as the overland rigs. The more you build for rocks, the worse the vehicle gets at everything else—unlike an overland rig: you can fit big tires and it will do everything. It won’t be the best, but it will be fantastic and reliable in all areas. 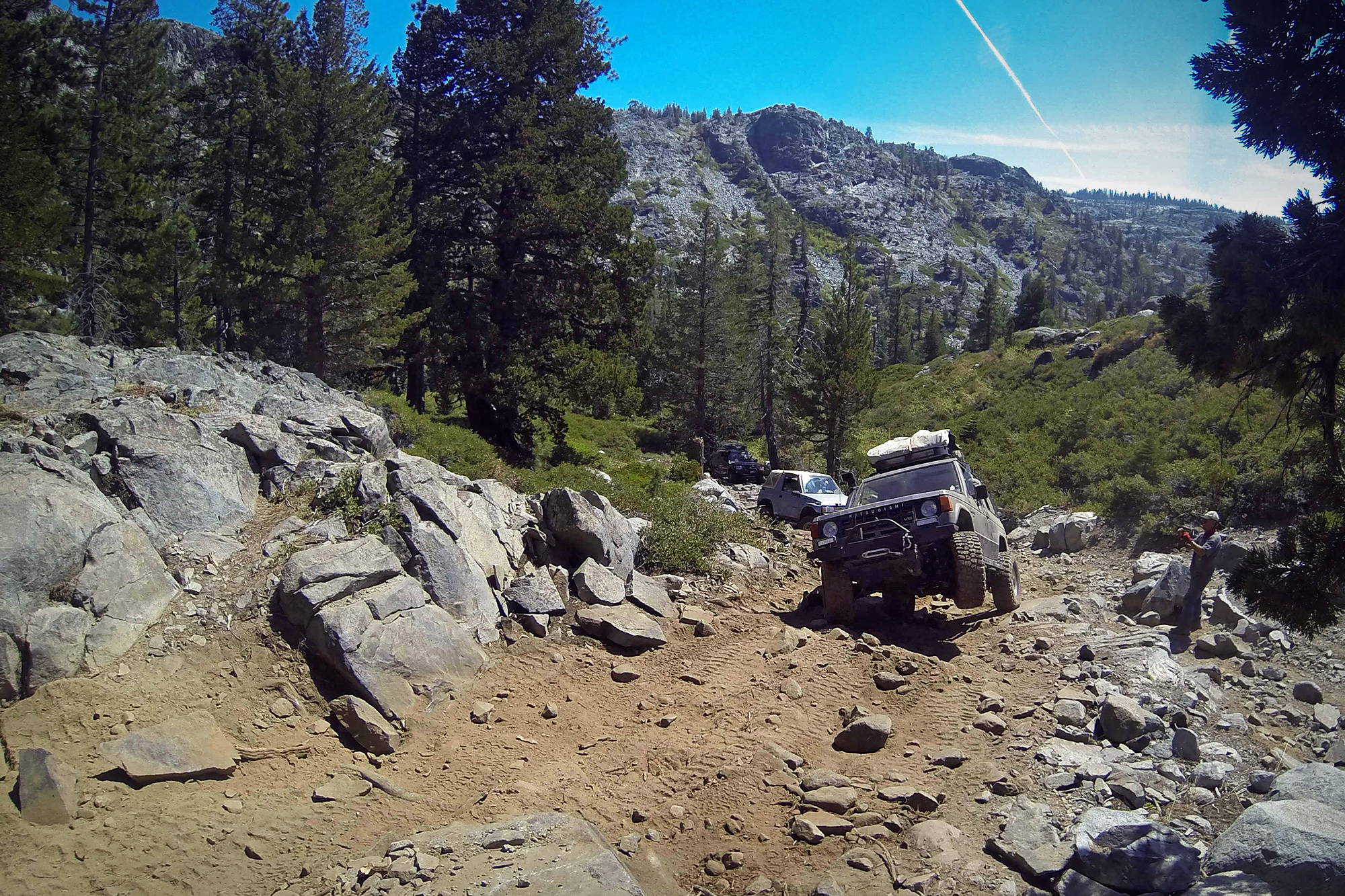 Most of our trucks are built up (because we’ve all had or have crawlers we’ve cannibalized and re-purposed), and it’s highly recommended your truck have at least one traction aide—locking or limited slip differential(s), anti skid, traction control—appropriate gears, and armor to make the trip as enjoyable as possible. However, a stock Montero on good tires with sliders will do the job.

The first time I went was in a 1994 Montero on 35s (bumpers and sliders as well), but stock suspension and gearing. It did the Rubicon no problem. It really doesn’t take much, but the less your rig is built, the more difficult it will be, and the chances of damage increase since your truck needs to work harder to do the job.

For us the lines are blurring between the crawler and the overlander. For example, you wouldn’t plan dual transfer cases for the overland rig. Some will say it’s not necessary to have that much gearing and that upgraded gears are perfectly fine (they are). But having everything is so much better and the cost isn’t that much more. 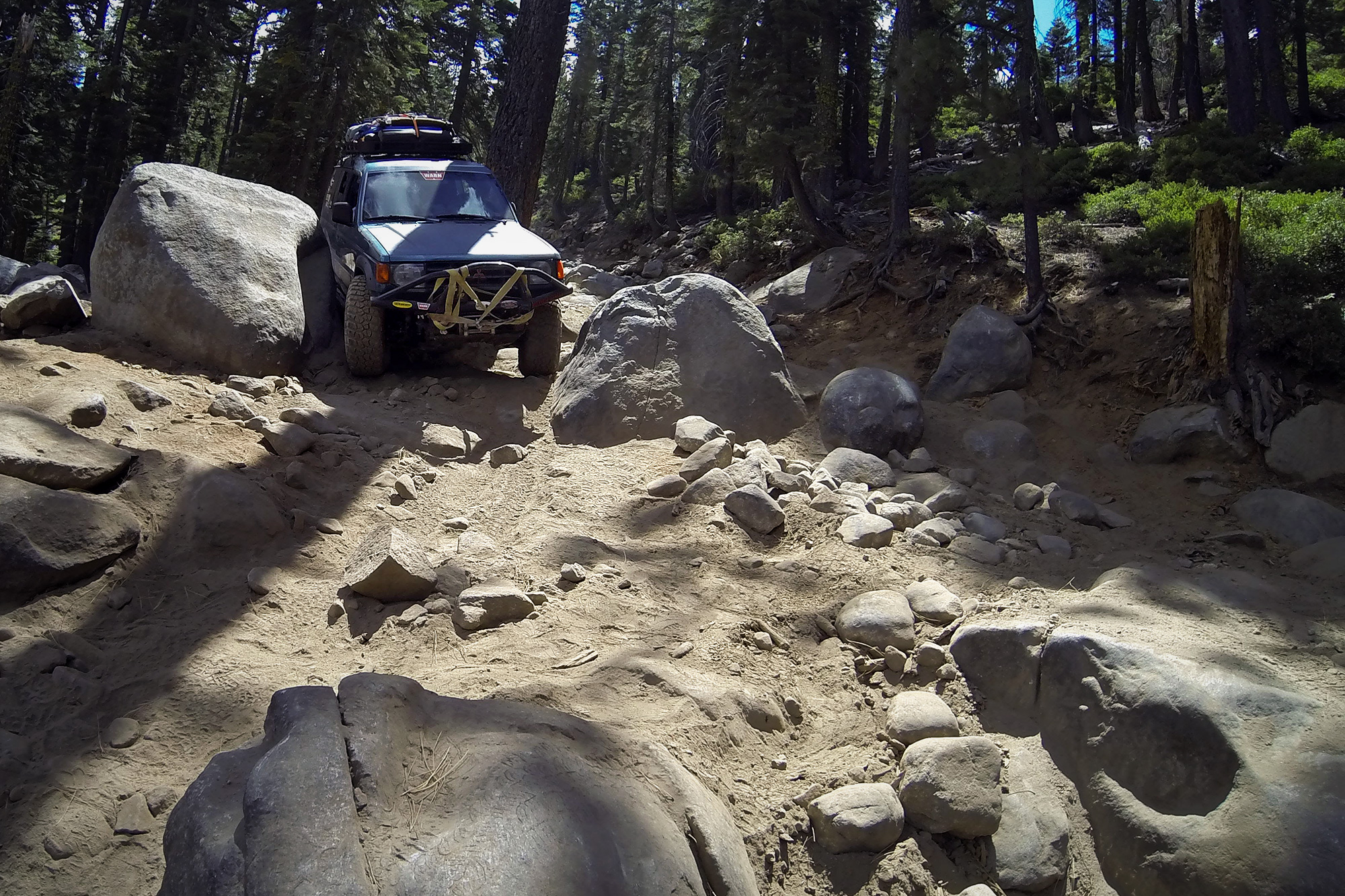 Think about the loads we carry for overlanding and how that makes the engine have to work harder, generating more heat. Running 2:1 in 2WD is invaluable. Think about taking a steep, winding mountain road with a full load in high range. I’ve gotten my transmission hot doing that before, and my wife overheated her engine doing it too. In 2:1 (stock low range) it makes that effortless. Unfortunately, it’s not that good off-road in demanding situations, so the upgraded gearset fixes that problem. Of course, now you’re too slow to use it more frequently. With two or three low ranges you retain that usefulness, it’s not a trade off.

Many overlanders spend thousands on rooftop tents, refrigerators, slide-out stoves, and all the bits and baubles that complete bespoke builds. How involved is the typical camp setup for your group?

Any old stove or grill does the job. Any old tent or tarp gets it done, but the refrigerator—that is a game changer. A good fridge keeps your food dry and cold, and they’re lighter than ice and water. If you get a system for drink rotation you save so much space just on liquids, it’s awesome. Now that I’ve used a fridge, it’s on my list of needs. The rest of the latest greatest gear I’ve tried has been cool, but not worth it to me: I sleep comfortable and I eat well, so if I buy more stuff I’m just lugging around more stuff and doing more work for no gain. 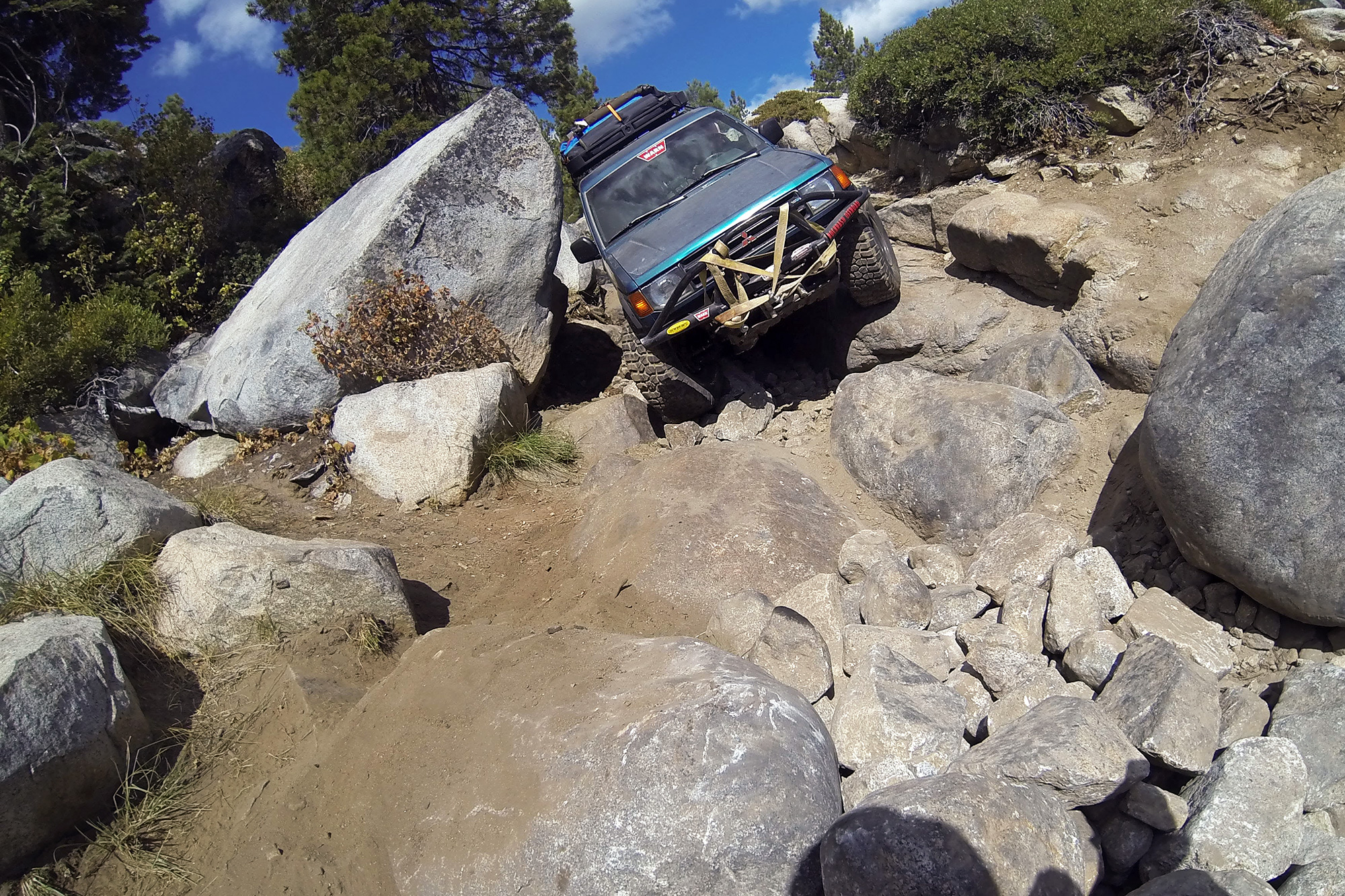 Our typical setups are a basic stove, tent, cot or pad, and ice chest. I do own tents and a lot of camping gear, but I don’t use most of it. Half the time I don’t even need a stove because of my meal prep.

You just changed my perspective on a few things: I thought you guys were hardcore rock crawlers (“AZ Crawlers,” after all)—I thought the Sierra Challenge was a serious, technical adventure for only the most prepared rigs?

This past year we actually had a dude who had almost no wheeling experience attend—Rainier (aka Fullmonty on Expedition Portal). His first real wheeling trip was the Rubicon and he had no idea what to expect. He was in a 3rd generation Montero on 32-inch all-terrains. He had lockers, sliders, skid plates, and a front bumper on an absolutely beautiful, low mileage ’06 Monty. 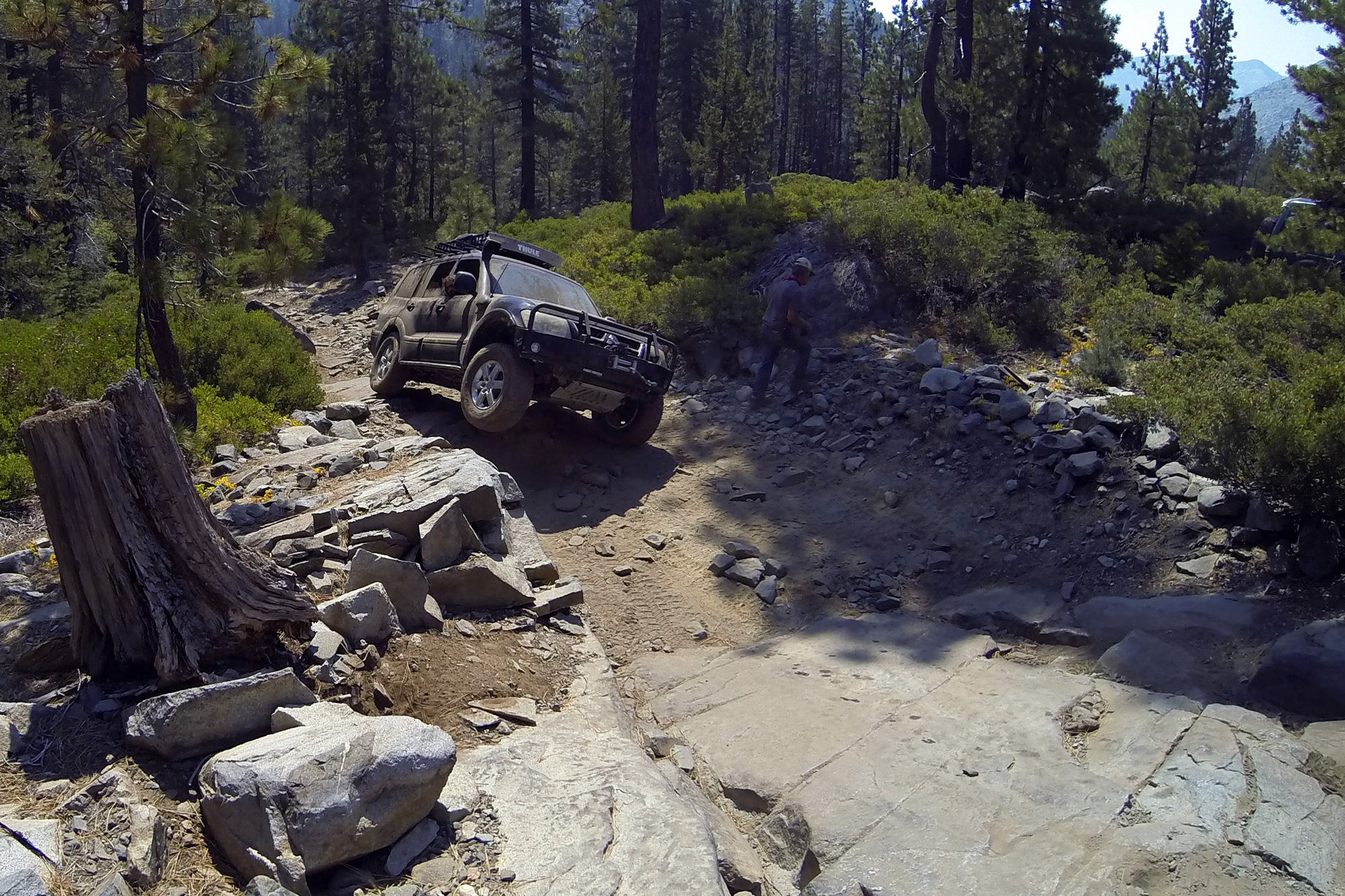 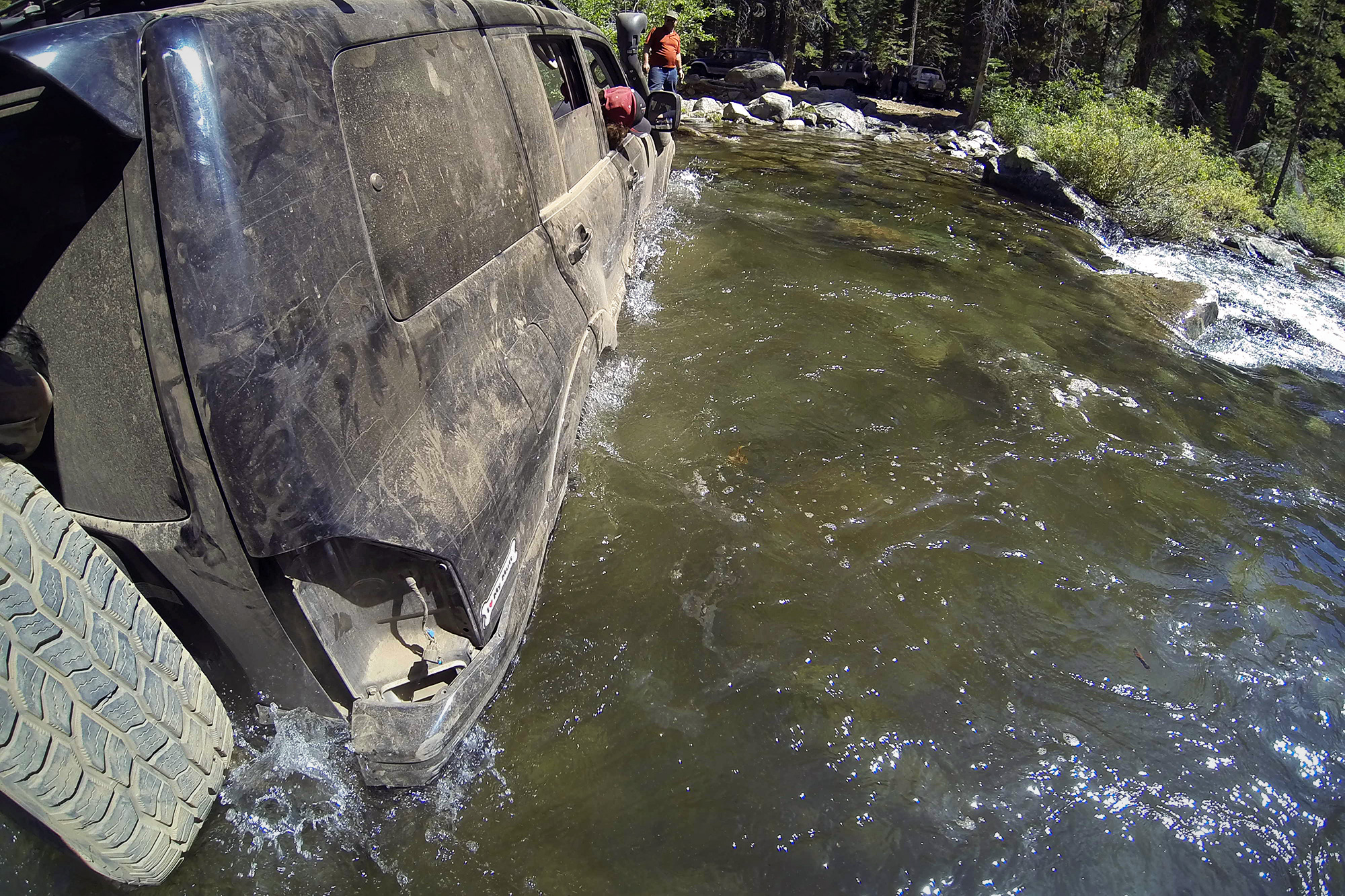 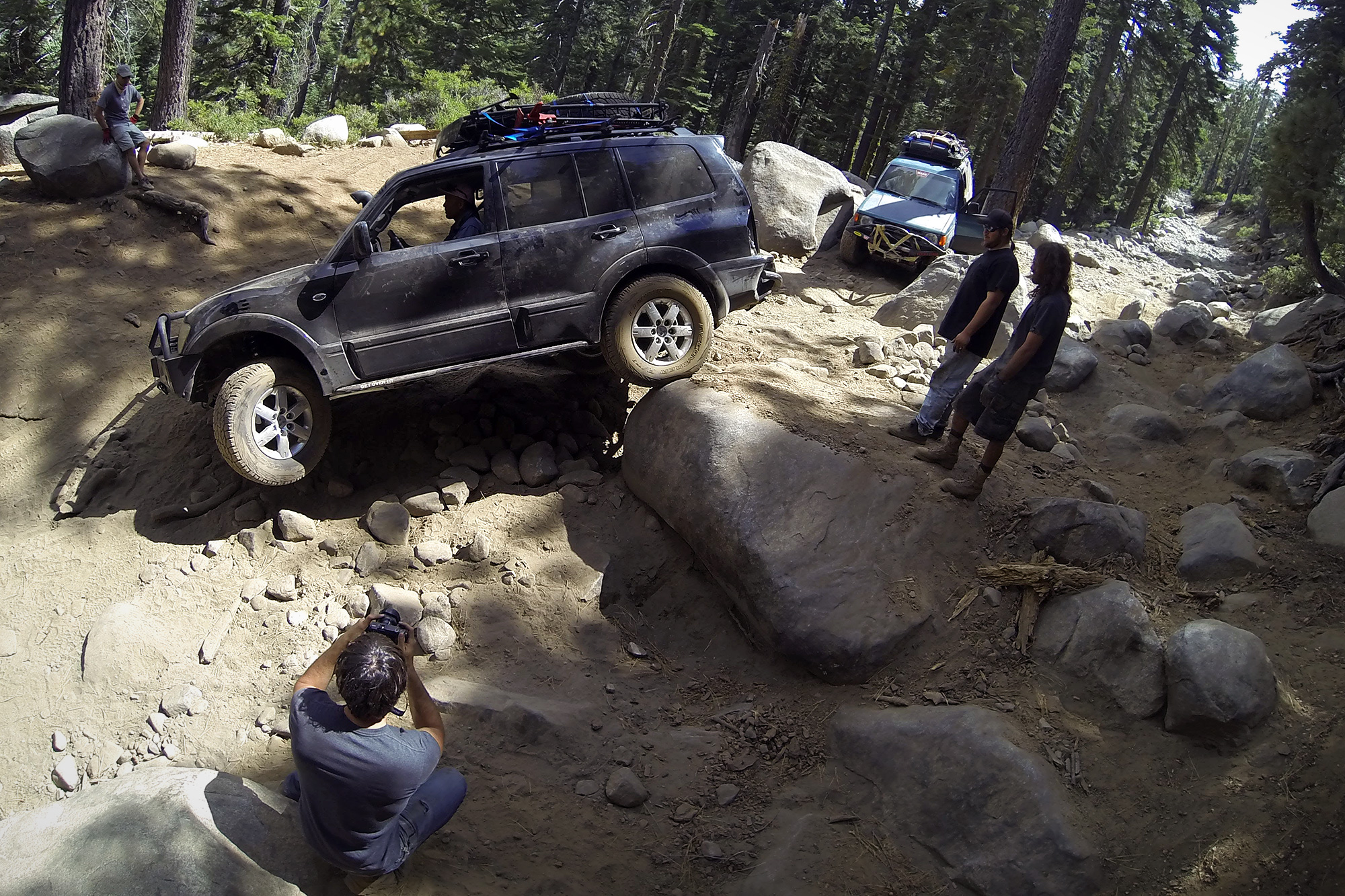 He did great on the trail and had a blast. He was really nervous at first, but accepted that his safety and vehicle were in our hands. I wouldn’t recommend cutting your teeth on the Rubicon, but it can be done. He did take the most damage, but he stayed in really good spirits and we kept him going and repaired his rig when we could.

He was just blown away how quickly we were able to salvage his trip when he broke a CV. This dude thought it was over, but we made a call into town and had a CV waiting for us at the next camp. Kevin gave him a class on replacing CVs and we were ready to go the next day. Our big carnage day was on the last day of Fordyce Creek. The same guy broke two or three CVs and a rear driveshaft (carbon fiber on the Gen 3). Again he expected the worst, and was expecting a tow truck and an angry wife.

At final camp we sent him out with a friend and they were able to get all the stuff he needed to repair his rig properly. All in all, he left the Sierras with nothing more than some scratches, a dirty car and a destroyed plastic rear bumper. He had such a good time and is going to be a new regular on this trip. 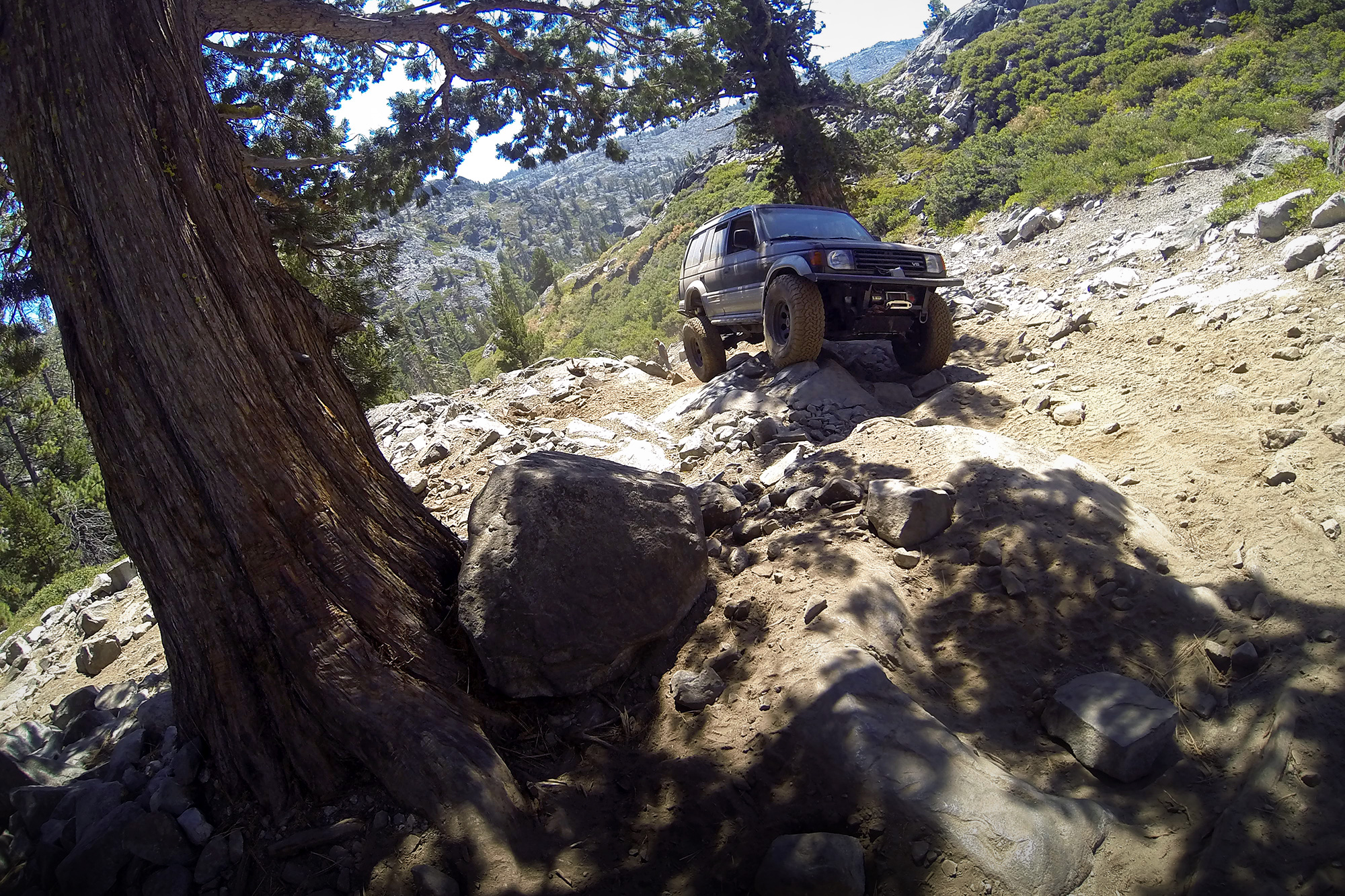 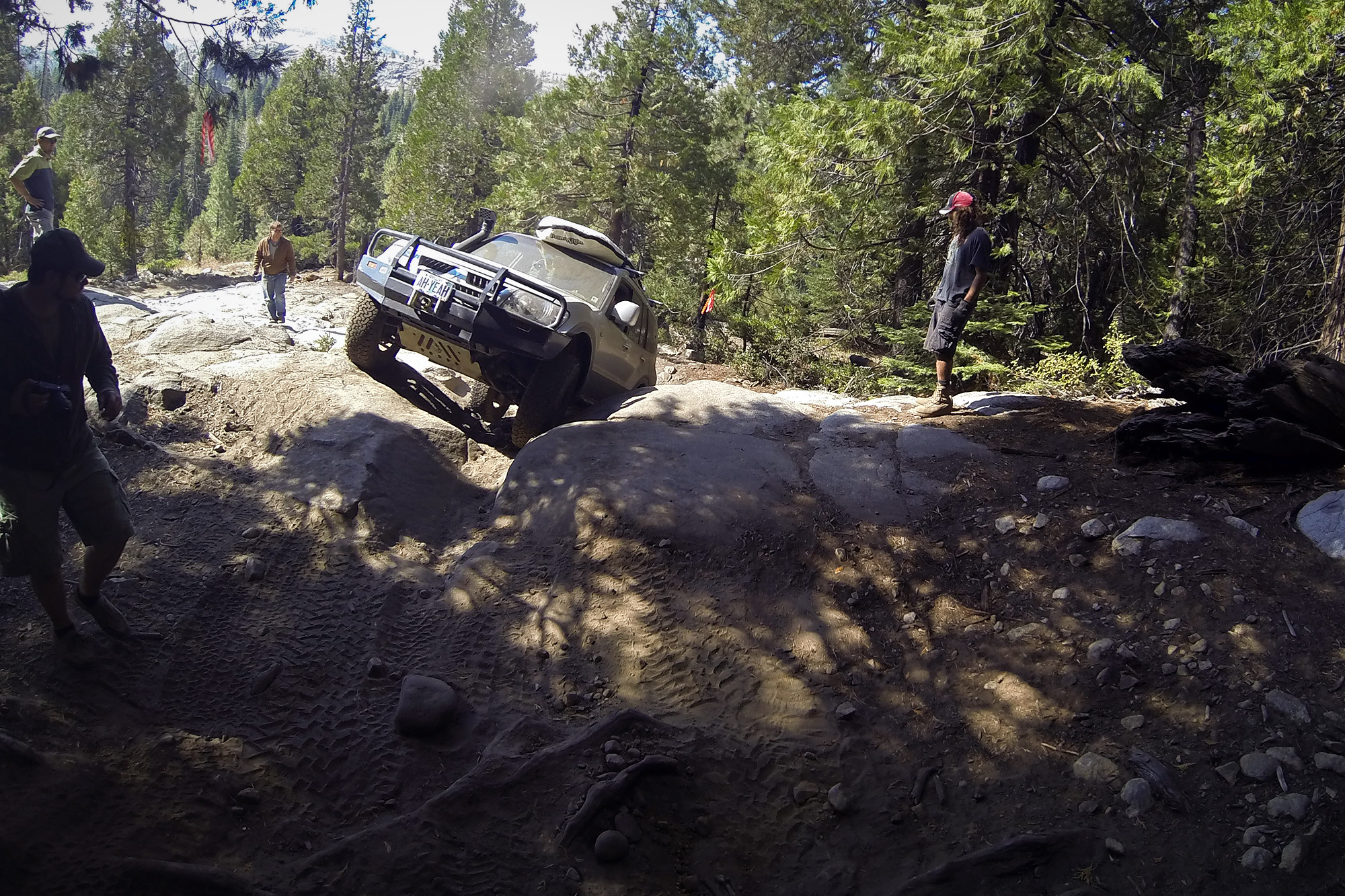 This year we actually had three rigs on all-terrains, to give you an idea of how doable it is. Rainier blew two tires, but he actually bought effing passenger car “all-terrains” at the advice of Gen 3 owners on Expedition Portal.

How have your adventures with this group changed your perspectives, on vehicle prep, on people in general, on the world?

My perspective on adventure has changed lately. I spent a lot of years, money, and effort building the most gnarly rigs and barely using them. More and more I find I can do so much with very little—the adventure is the goal, not the baddest rig. I’ve always had one or two really built rigs, but I own a few stock machines and that’s actually what I’m driving and wheeling the most. The others get taken out the least since they cost the most to operate and require the most work. 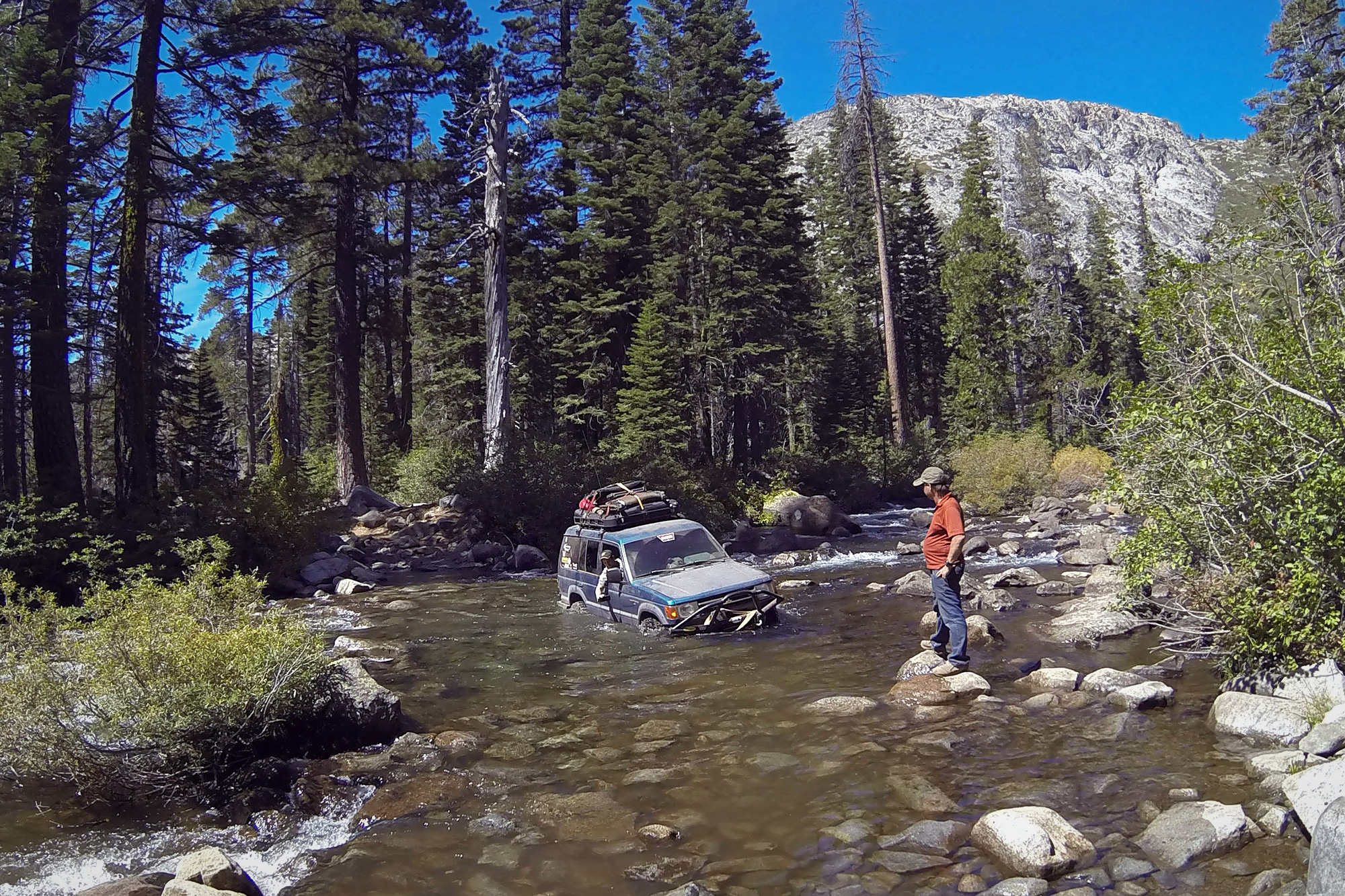 At the end of all this discovery I have my big blue Montero that is more iconic than it is usable. This is changing, I’m rebuilding it to be more of a do-everything machine. I want to get more use out of it. I want it to replace everything I own except my daily driver (a GX-470). I’m keeping the long travel rear suspension, limiting the front to stock, switching to larger, aggressive all-terrains (much lighter than my current M/T tires) and adding some overlandish features like a fridge and a clever water heater. 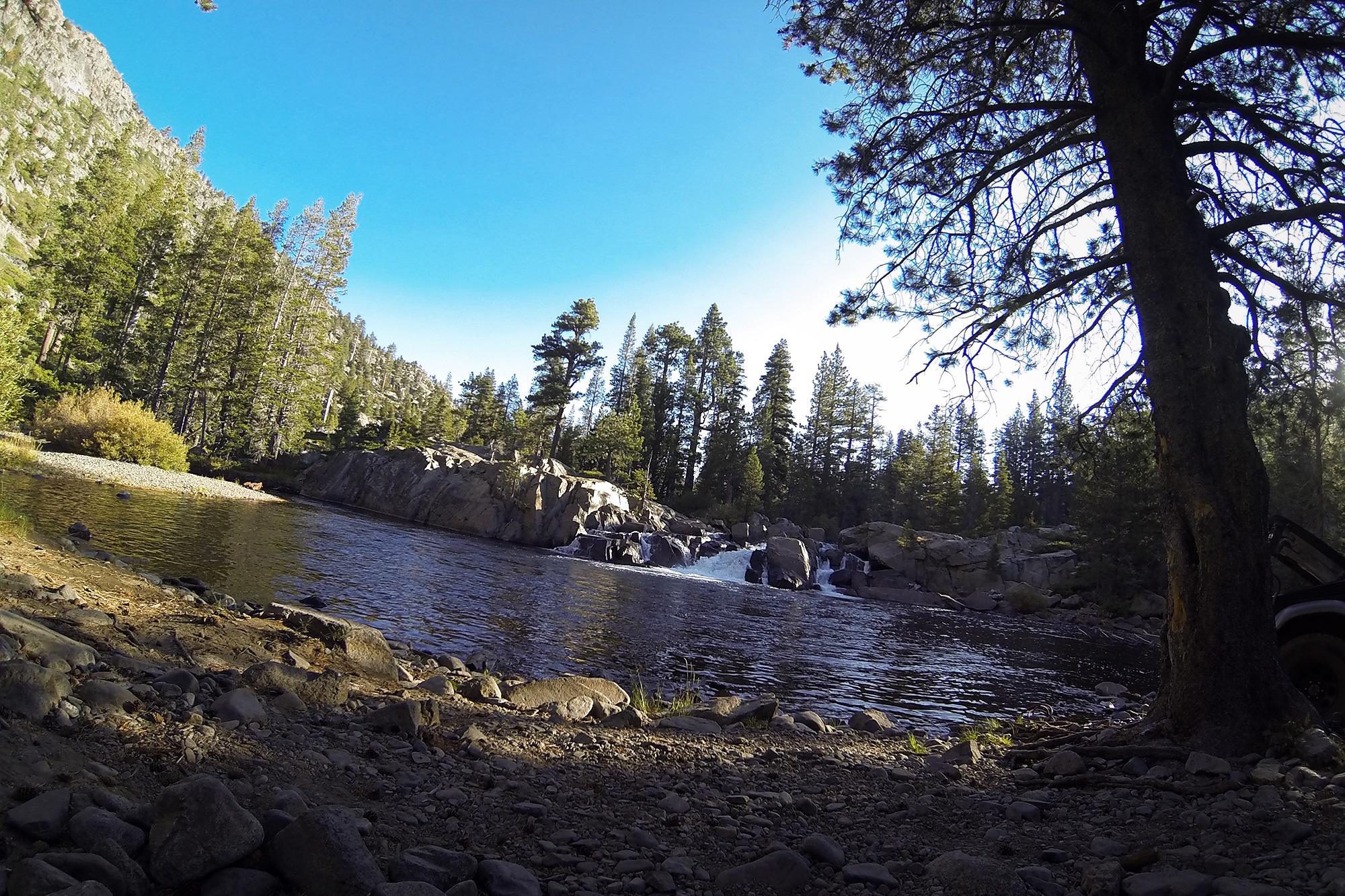 My perspective on people hasn’t changed. I care about humans. I love people, but I know, and always have, that we are a plague and the earth’s immune system will dispose of us at some point (especially the more negative impact we create). This paired with my spirit of adventure has become a motivator. My adventures have changed my perspective on the world as the memories made could at some point be only memories, with no possibility of being recreated or added to.

All of this matters because it might not be here tomorrow. We must enjoy it while we can. We must expose our friends and our children to the natural world before it becomes off limits or dead to them. These memories and experiences will move humanity (hopefully) to do something about the problems we are facing environmentally, morally, and politically before it’s too late. One or two dudes collecting trash along a trail or fixing damage can’t save our hobby. It takes “us” as a whole. Everyone needs to do their part and educate those who don’t know better. 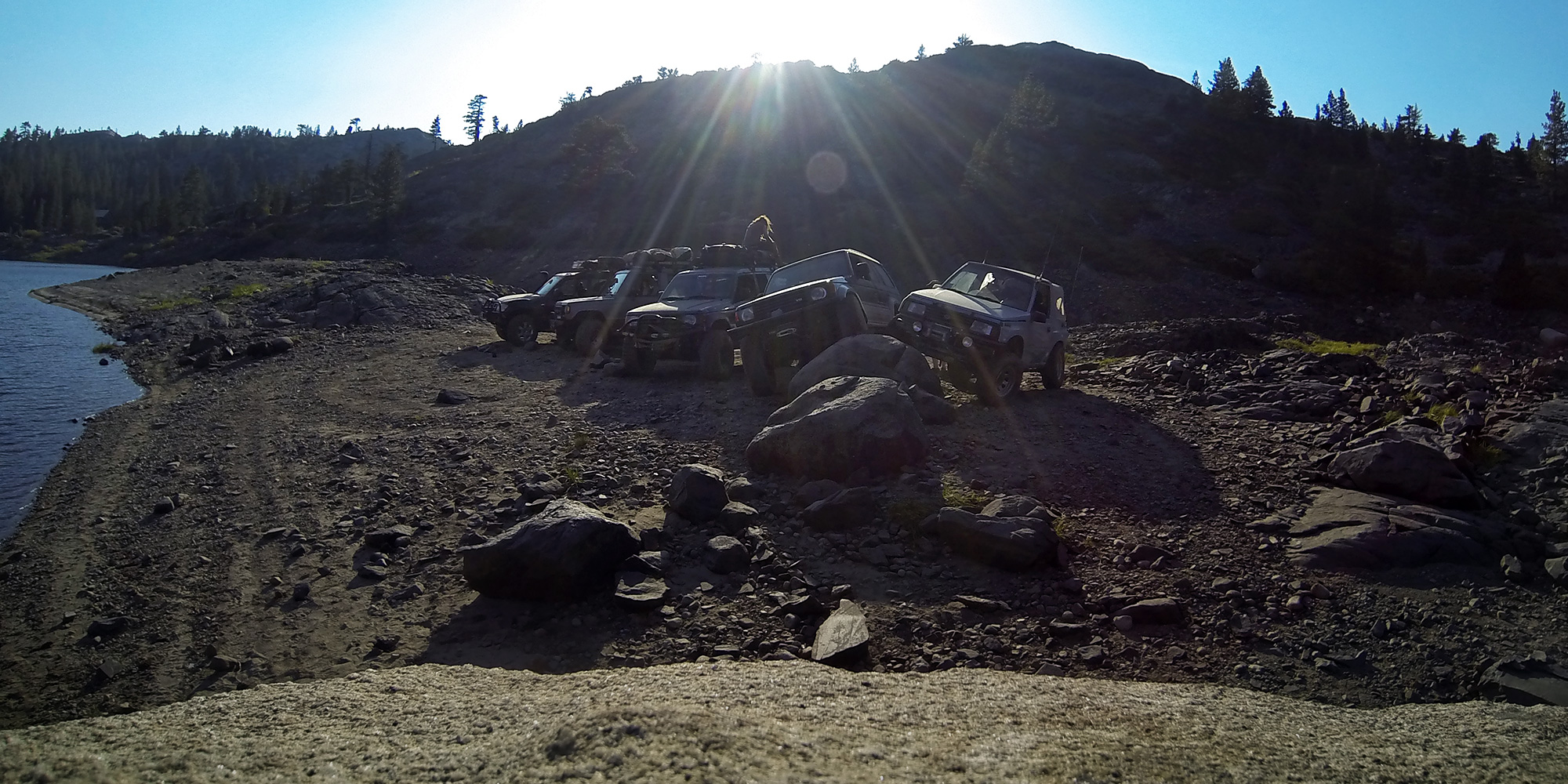