Soul on a String : American Adventurist

Some of the most interesting stories are those surrounding why and how our interests change over time. As a relative newcomer to this business of exploring—of adventurism—I’m particularly interested in exploring the common ground between adventurists like us.

Few of us get seriously involved in more than a couple pursuits. It’s classic opportunity cost—the more you do of this, the less you can do of that. It’s important we help each other have the best possible first time experiences in new areas. That’s one of the reasons why I’m so excited to share Dominic’s story with you here today.

In 2010, I interviewed a Phoenix local about his modified Mitsubishi Eclipse. In 2011, I followed up because he’d sold the Eclipse and bought a modified Jeep XJ. Today, we’re talking to the same guy five years later about his mountain bike (MTB) obsession.

[bd] The Backstory. We met back in the Mitsubishi/Diamond Star Motors (DSM) days. You had the clean GST, but soon left the scene in favor of lifted trucks and off-road adventures. Why? Did mountain biking (MTB) have anything to do with it?

[dg] Mountain bikes had nothing to do with me leaving the DSM scene. I was getting married and with that came becoming a father to a then 3-year old. After a couple late night close calls—one with a cop and one with a concrete embankment—I decided it was time to stop rolling the dice and cash in my chips.

That lead to the 1996 2-door Jeep XJ/Cherokee (7-inch, long arm lift and 33s), which lead to a Tahoe, which lead to a Duramax diesel, which lead to a Mazdaspeed 3, which lead to my FJ Cruiser. Now for readers who know anything about being married, you can see my wife is a monument of grace. That said, I will be driving the FJ for some time—at least until she gets a new car.

Owning trucks let me experience the outdoors in an amazing new way. They took me to places I would have never been able to travel without them. This experience, connecting with nature in a new way… this is what my passion for trucks and the outdoors has in common with my love for riding. 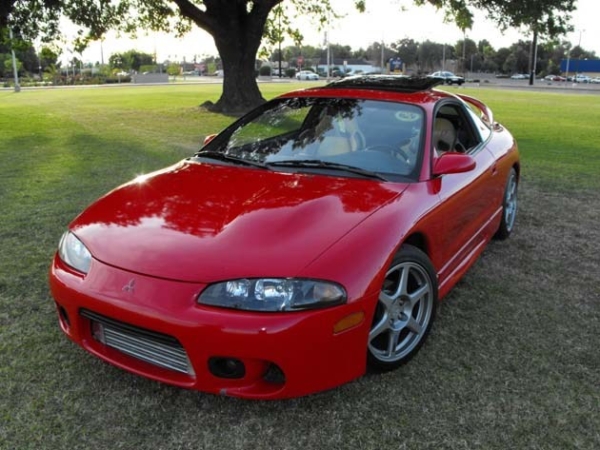 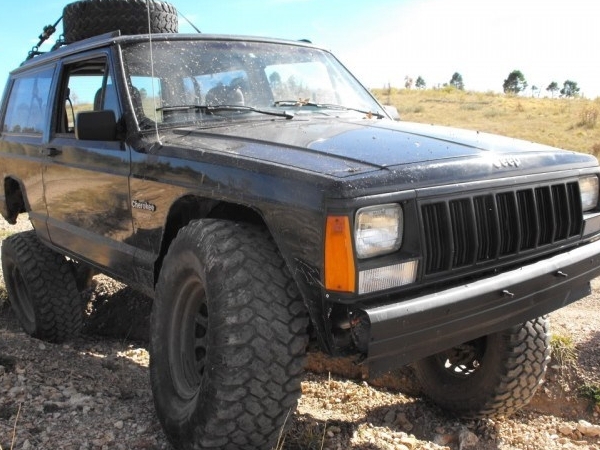 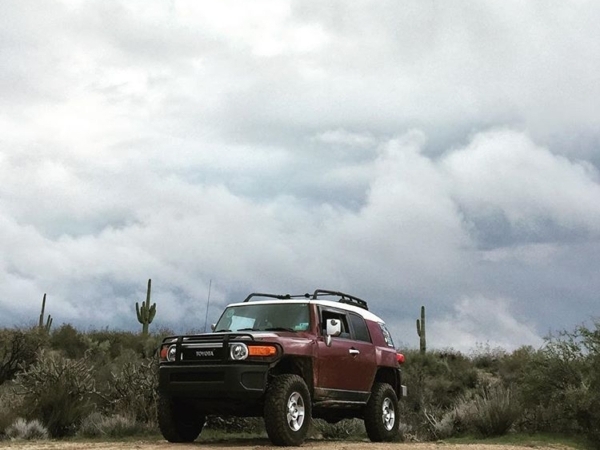 [bd] How often do you ride? How many miles a month? In the last year, I’ve probably seen you post hundreds of pictures of MTB shenanigans on Facebook. It’s like you’re out there grinding away and getting the big air every weekend. Why?

[dg] I ride every chance I can get out of the house. I average around 20 miles a week. Recently I have really gotten into capturing my rides in a way the viewer can see the moment I feel totally free—usually in the air or bombing down a mountain. In these moments I want for nothing.

This lack of want translates into freedom. This is what it takes to truly quiet my mind. 100% focus on the task at hand leaves no room for the burdens we all carry daily. I tell people, when they ask about the risks I take, that when I am on my bike in my element, it’s equivalent to me tying my soul to a string and letting it flap in the wind. 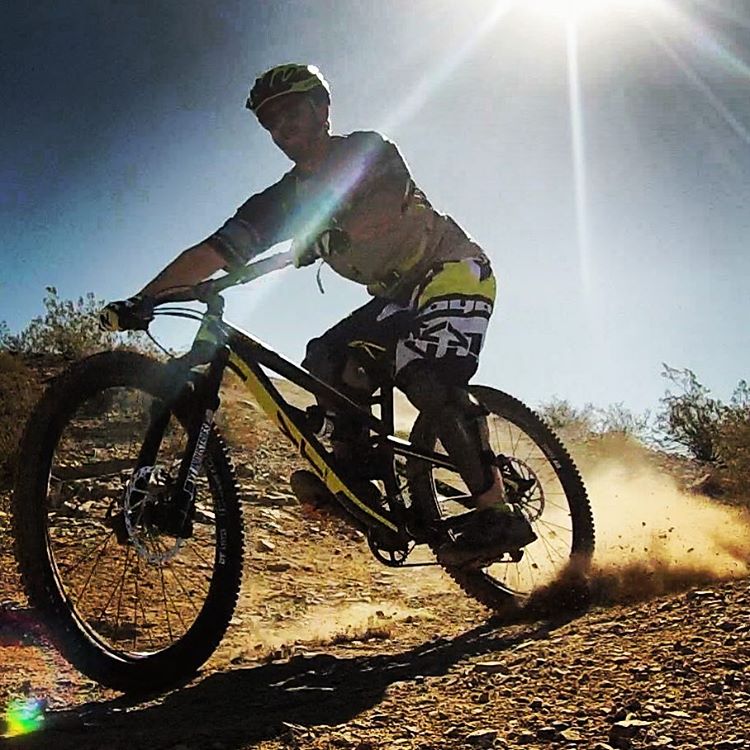 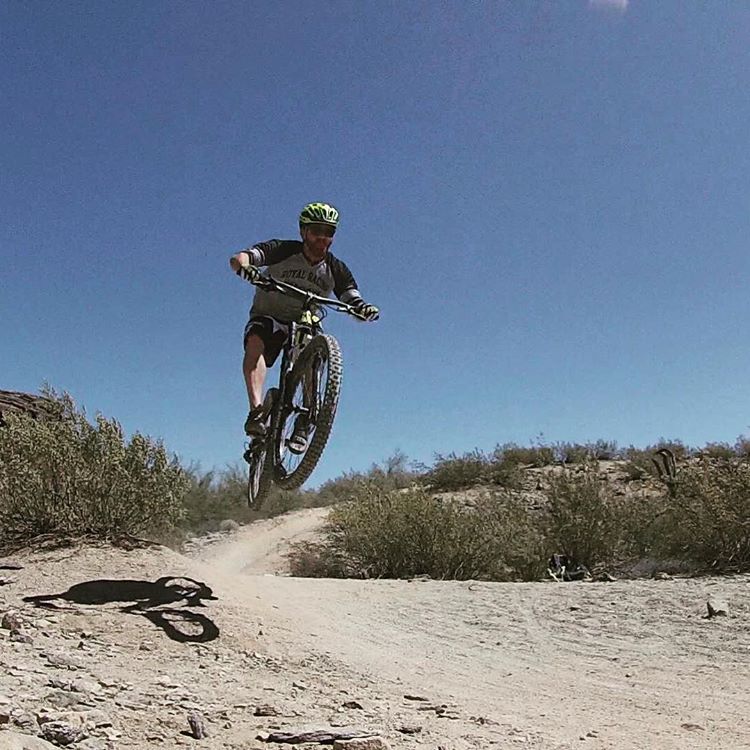 [bd] This is probably a good time to talk about the bike(s) a bit. You had a Cannondale 29er, and now rock a YT Capra. Briefly, tell us about the old bike; if you bought it new or used, stock or modified, how long you had it, and why you decided it was time for NBD (new bike day).

[dg] I have 2014 Cannondale F29 Alloy 6. It’s a great, wonderful hardtail. I upgraded the bars to 800mm Nuke Proof and switched to a 1×10 drivetrain for weight savings and to help build my legs.

I started spending lots of time on my home mountain (South Mountain, Phoenix, Arizona) running trails like National Mormon. Lots of down hill, however, as it goes, nothing in life is free. If you want to go downhill you must first go uphill. After months of beating the shit out of my bike and my body I arrived at the conclusion that, for my downhilling needs, I wanted to switch to an enduro-style bike.

The idea behind an enduro bike is it has lots of suspension travel—160mm+ front and rear—but can still climb. This realization is what made me decide it was time to add another bike to the stable. 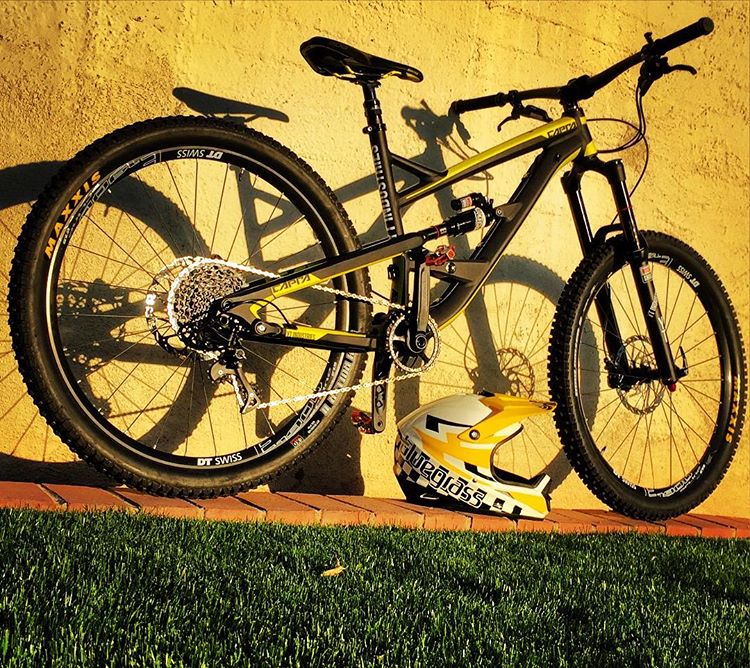 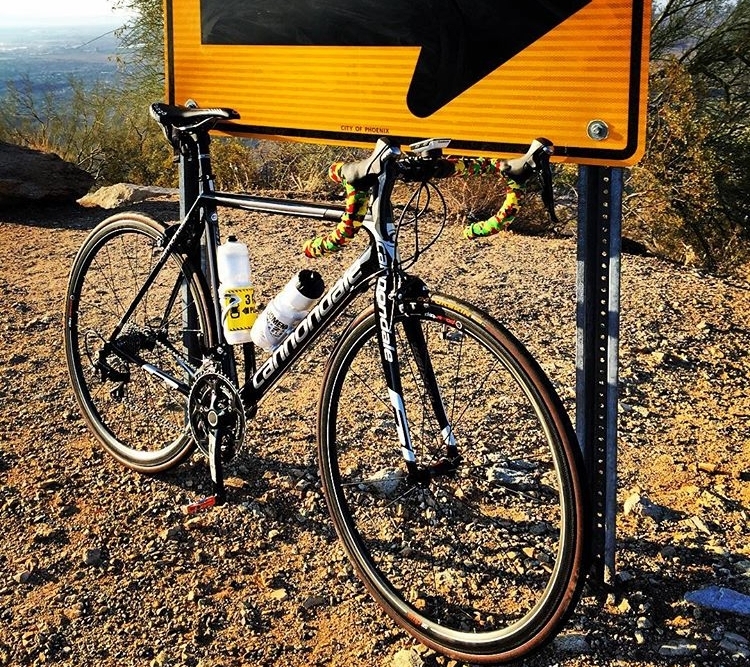 [bd] And the new bike? I’d never heard of YT before you mentioned it. How did you discover this bike, let alone decide it was worth the investment. (MSRP is almost twice what I paid for my Montero.)

[dg] YT stands for Young Talent. This company is largely European but started a small US distribution center based in Reno. The only way you can get a YT is to order it directly from the company. This saves you around 30% over other bikes that have the same level of quality and components. YT is starting up in the U.S. with the help of Cam Zink (Red Bull superstar).

It’s also nice to be on the mountain kicking ass and taking names with a bike that is unique. 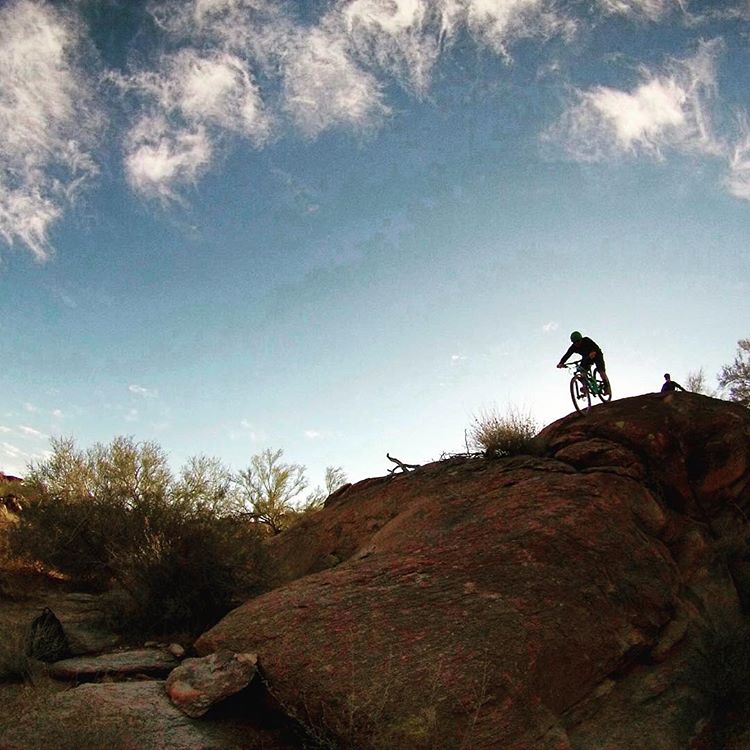 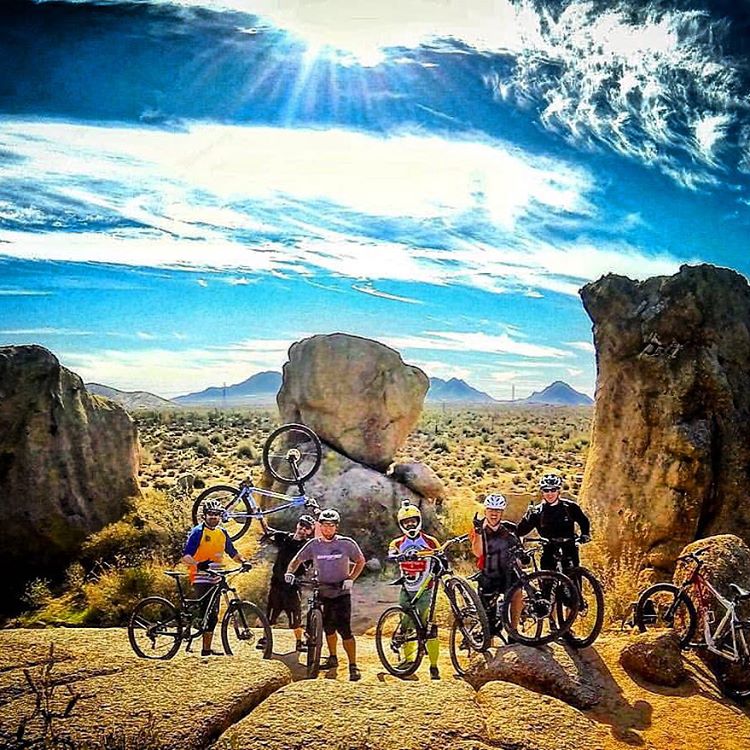 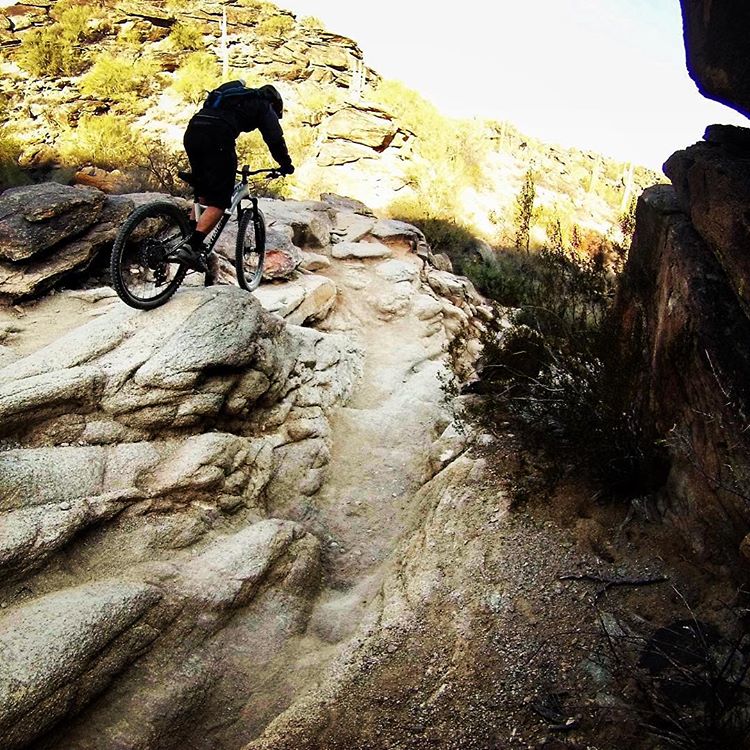 [bd] “Mountain biking” has something of an identity crisis these days. The term is used to cover everything from casual touring on dirt trails to downhill racing to whatever adrenaline-fueled deathwish Red Bull can strap a GoPro to. You’re more familiar with these distinctions than I am. Pros and cons?

[dg] The diversity in mountain biking is crazy right now; cross-country, downhill, enduro, fat tire. 26-inch wheels 27.5, 29. And now 27.5+ and 29+. There are so many options and the one for you will be obvious once you start really riding.

PRO TIP: Start with a nice hard tail and build your legs without killing your budget. Go to the local bike shop and test ride lots of styles. Don’t be overwhelmed! After all, you are just deciding what kind of fun you are getting into. At the end of the day they are all fun!

[bd] One of our goals for Adventurist Life is helping each other have the best possible experiences in our secondary, tertiary interests, and beyond. For example, my primary interest is 4WD trucks. After that, I want to spend more time on my bike or hiking. I’m interested in stories that help me have the best possible experiences as someone who isn’t all-in on either (yet).

Someone out there is going to read this because he or she’s been thinking about getting back on a bike again, but doesn’t want to drop the serious coin on a whim or waste respectable coin on something that only delivers disappointment. With so many options out there these days, what questions would you recommend these folks ask themselves to ensure the best possible chance of happiness?

[dg] Go used to get started. Make sure bike is the right size for you. Join a riding club. If if you are in Arizona, the club I am in is called Crank Yankers. They are totally awesome and have scheduled rides every week. This gets you out on the trails without having to worry about getting lost. 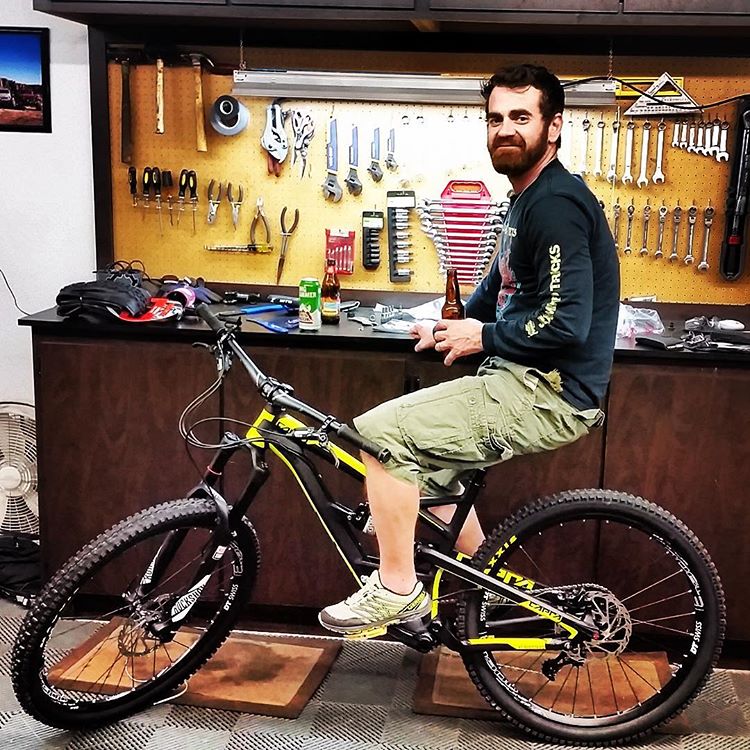 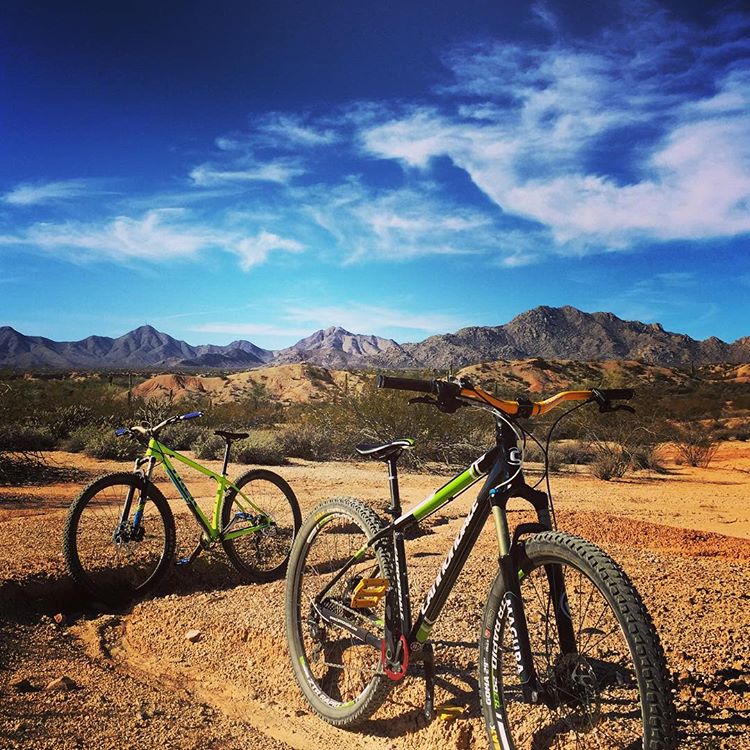 Take a minute to think about what you were into before you were into what you’re into now. Probably feels like ancient history at this point, right? Few of us get seriously involved in more than a couple pursuits. The more of this we do, the less of that. If you loved riding bikes back in the day, there’s a good chance getting back in the saddle will feel right.

If you’re thinking about hopping on a bike, remember, you don’t have to spend a fortune. Test ride a bunch of bikes. Find what works for you. Pick up a used bike if you have to. Then go find some new friends to help you get the most out of it—and yourself.

It’s important we help each other have the best possible first time experiences in new areas. Six years ago, Dominic was deep in street/track scene. He built his own race car. It was fast. It offered a sense of freedom. When it came time to walk away from the race track, Dominic found the single track. He found that freedom on two wheels; a freedom limited only by his effort and ability.

Next time you’re talking adventures and gear with a new friend, make a point of finding out what else they’re into and what they were into before they discovered this business of exploring. You might find yourself in the presence of long, lost family.