Back in May, I installed some things on Project Tundra and something weird started happening.  I started getting this muscle soreness whenever I would drive the truck, and the problem seemed to be exacerbated by driving on dirt roads—especially when driving in a spirited manner (If I’m being honest, it happened on paved roads too….especially the twisty-windy ones.)  After seeking the help of various medical professionals with no luck, I took my problem to Google.  Rabbit holes were explored; but to no avail.  Months later, I can only conclude that I’m suffering from the thing that I hope has afflicted everyone who drives a vehicle off road:  Soreness of the face from too many Grins Per Mile.  And I put the blame squarely on the Icon Vehicle Dynamics (IVD) suspension for making my face hurt from grinning so much. 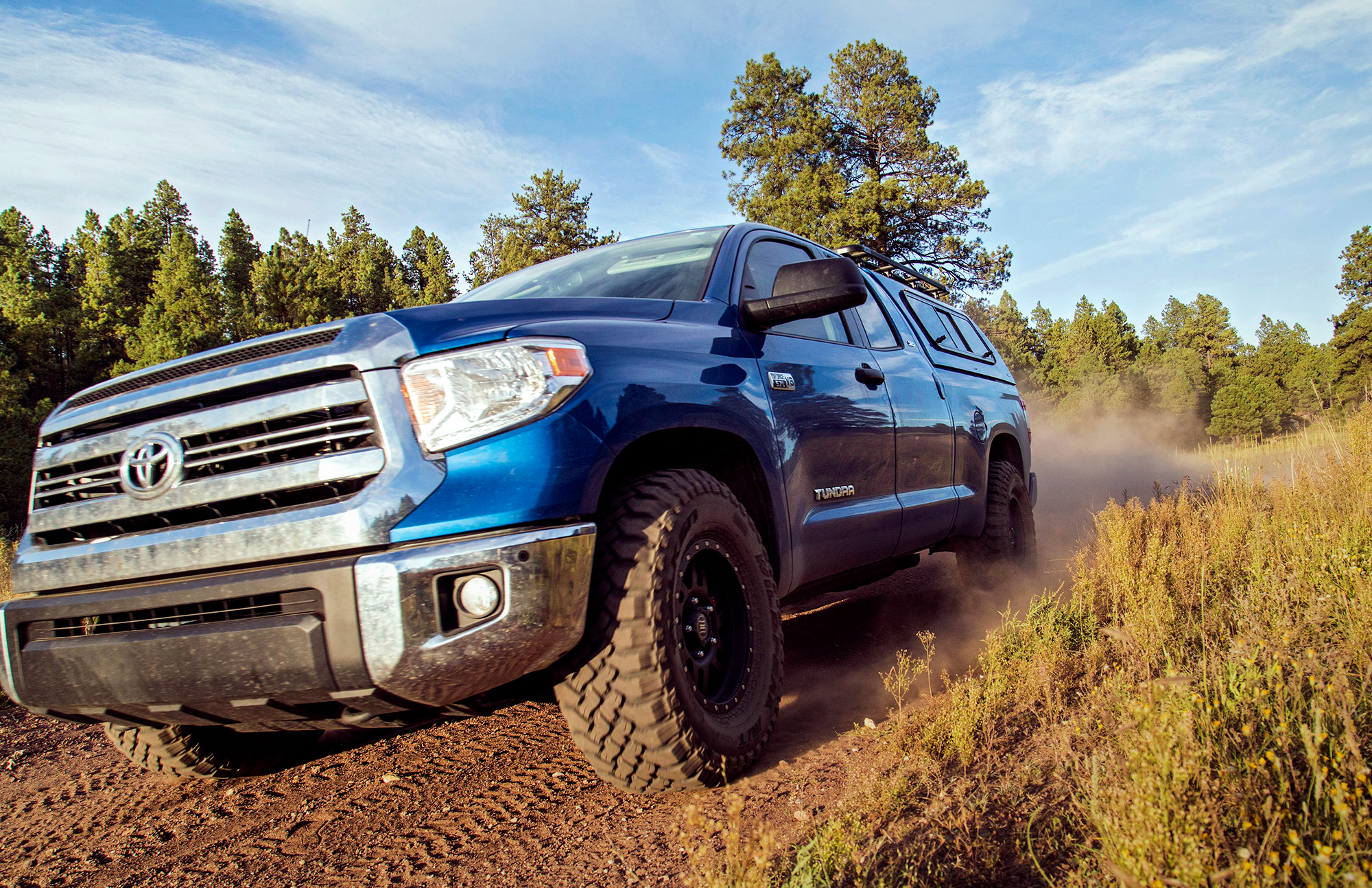 Not only has the raw enjoyment of the truck increased by installing IVD suspension, but the real world performance has improved considerably as well.  As a quiver-of-one vehicle, Project Tundra does everything from long hauls on America’s interstate system, to frequent trips on our favorite dirt roads.  Therefore, the truck’s suspension system needs to keep the vehicle rubber side down while dodging exploding semi-truck tires at 80 MPH in Utah, and soak up washboarded dirt roads in Arizona so that passengers can still play Jenga in the back seat. 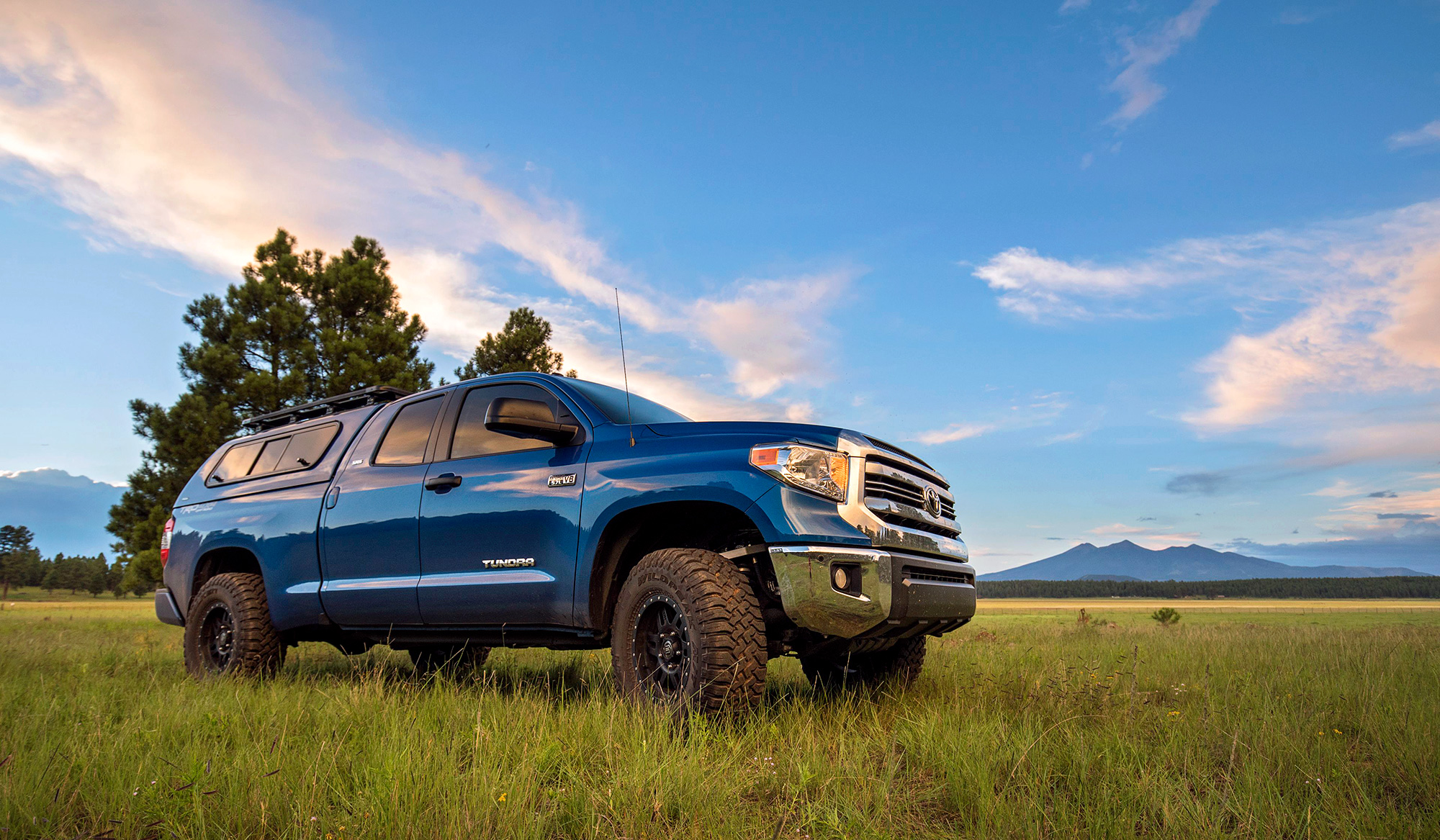 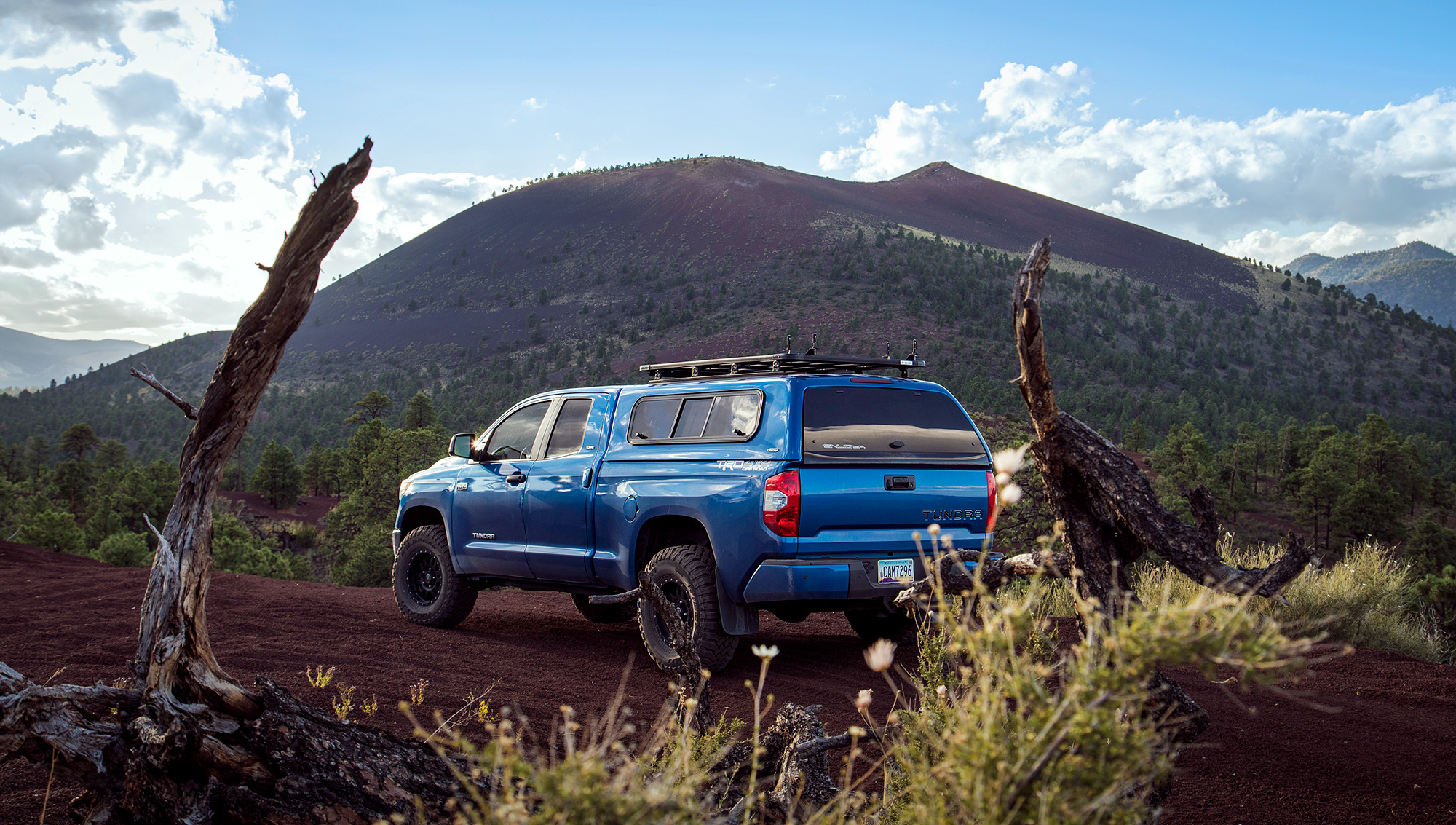 Off the dealers’ lot, the stock TRD suspension is respectably capable—but there’s certainly room for improvement.  The folks at Icon Vehicle Dynamics have spent hundreds of man-hours developing suspension products specifically for the Toyota Tundra, and all of this R&D time enables them to suggest specific parts based on how you’re going to use your rig, and what you’re going to carry with it.  After talking about the end state of project tundra and how it would be used, IVD came up with a selection of parts that would make the Tundra perform like a magic carpet over a wide range of loads and roads. 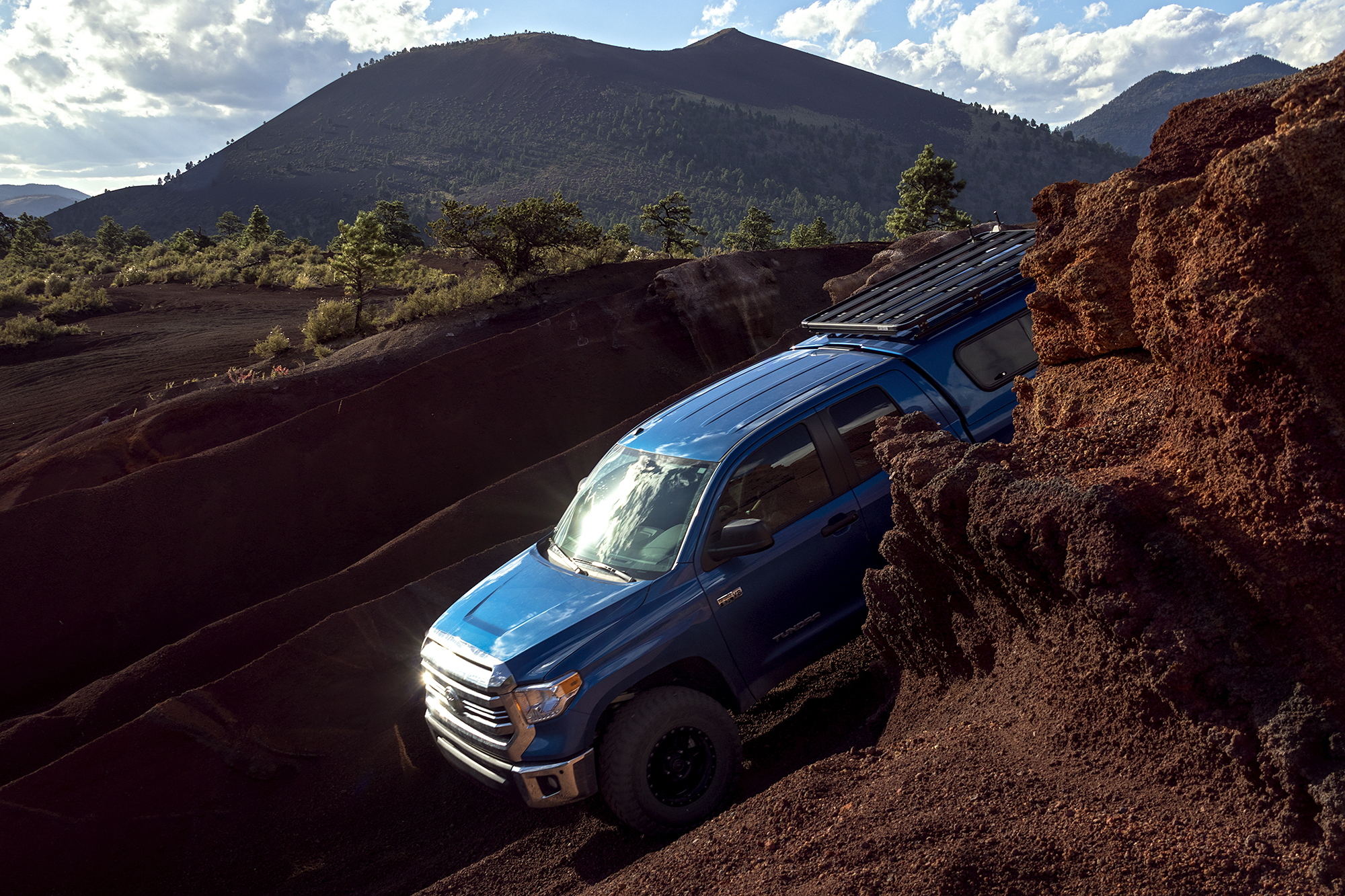 PARTS OF THE PUZZLE

We were fortunate to get our hands on Icon’s new 3.0 Series coilovers and billet Upper Control Arms (UCAs) sporting the Icon Delta Joint for the front end of Project Tundra.  The 3.0 coilovers take the proven performance of the 2.5 Series coilovers and turn everything up to 11.  Everything on the 3.0’s is massive, as are the performance gains they provide over monotube shocks in every metric.  You can’t help but call the stock TRD-stickered Bilstein units ‘cute’ when they’re placed side by side with the 3.0 Series coilovers.  Installing a larger coilover assembly requires installing an aftermarket Upper Control Arm (UCA) that will clear the new coilover, yet this also provides real performance gains for suspension performance. 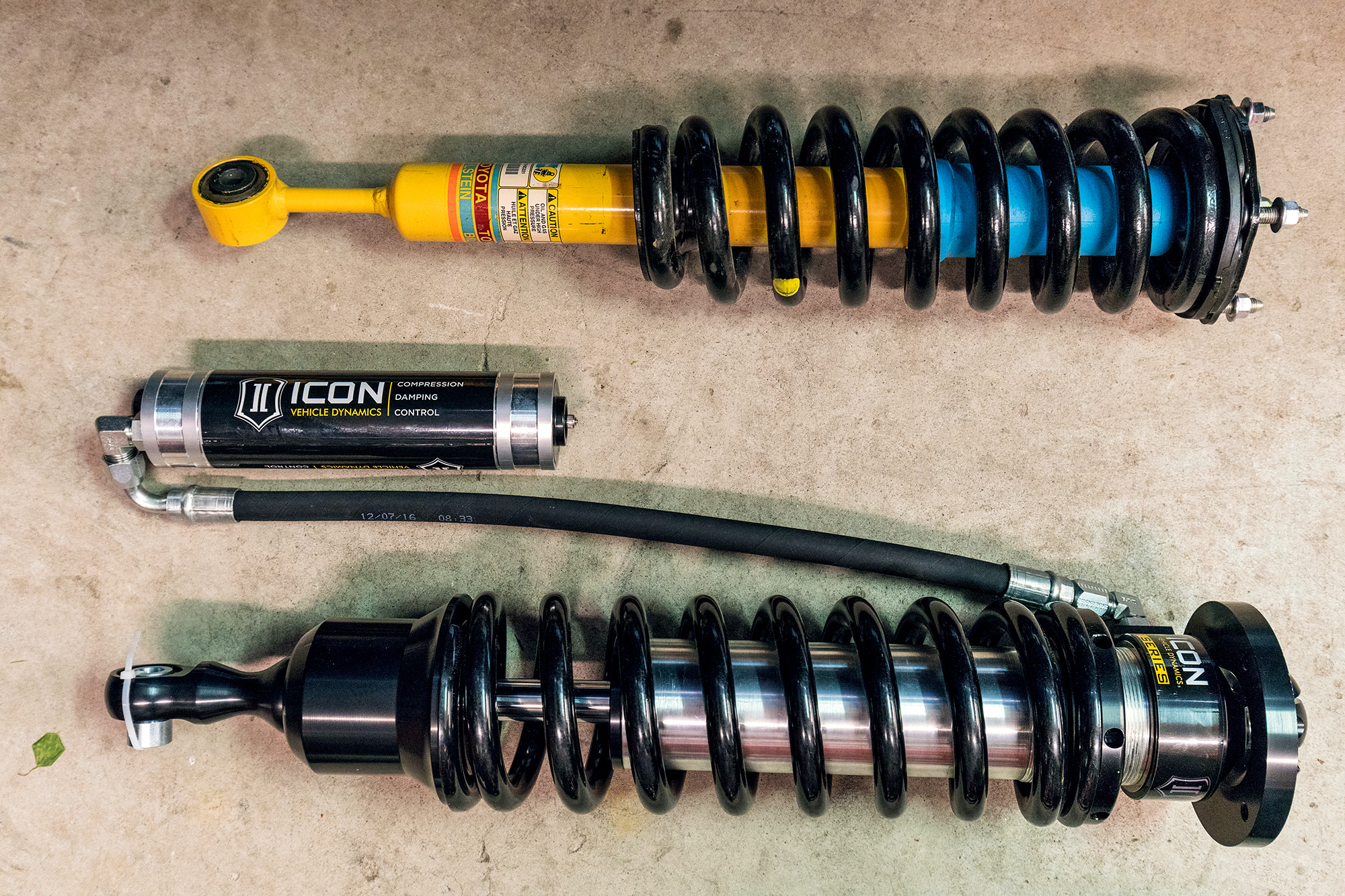 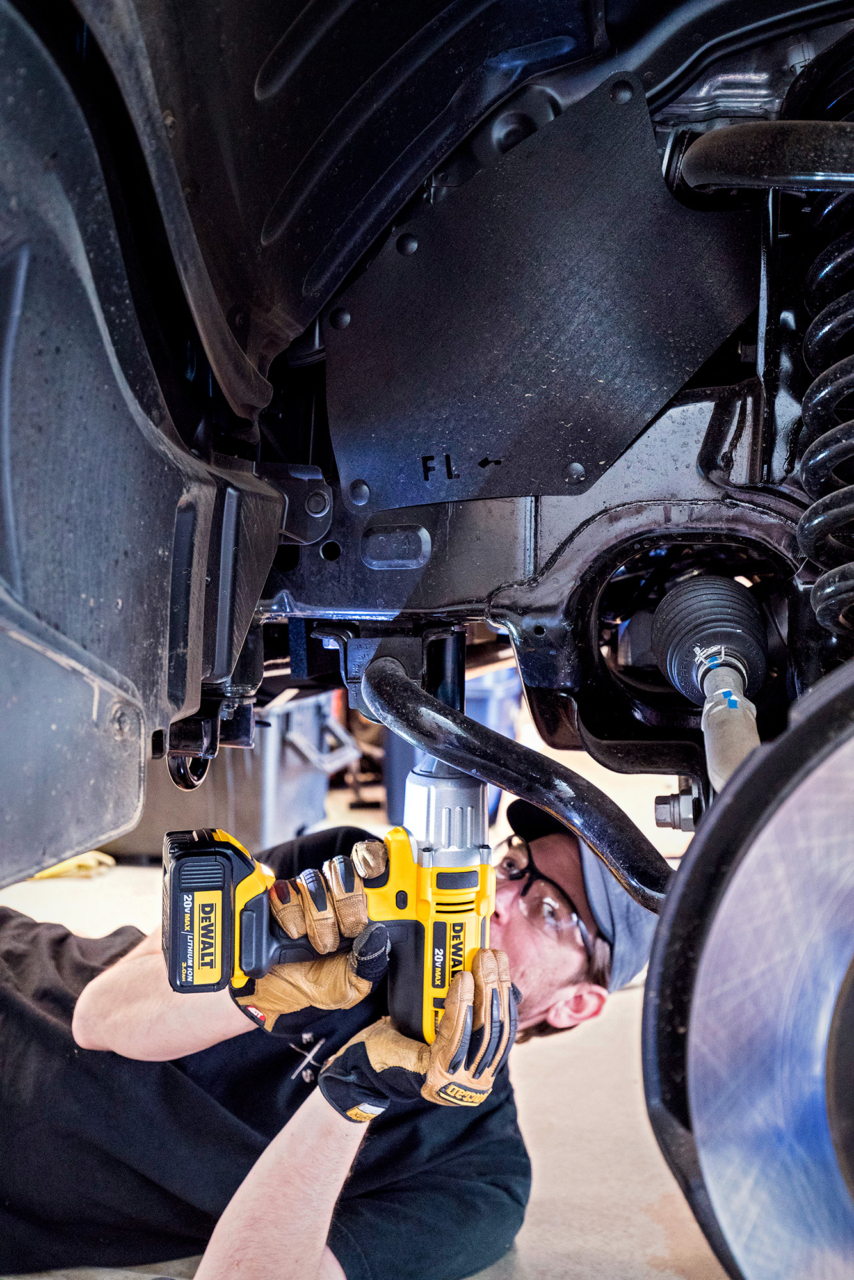 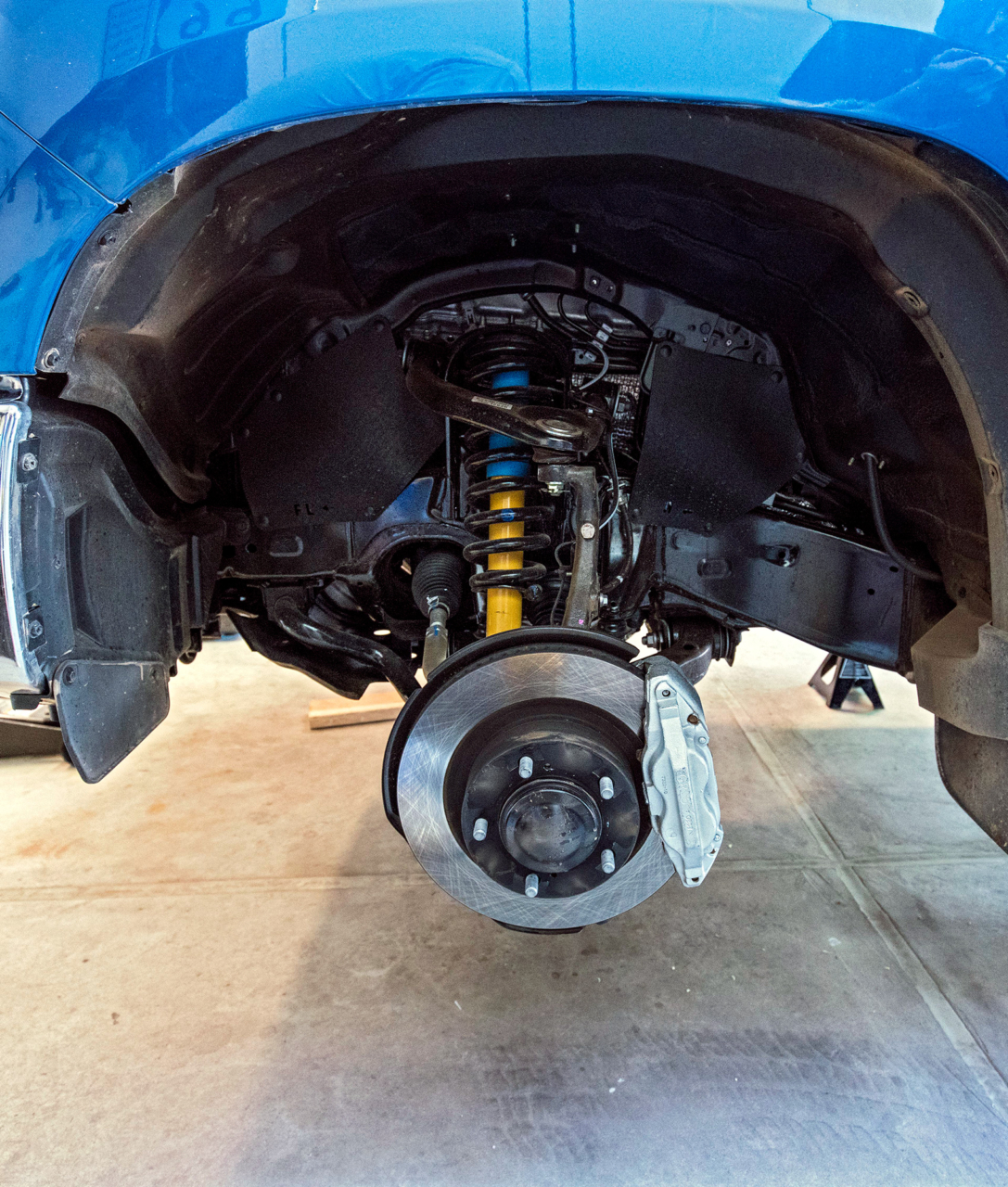 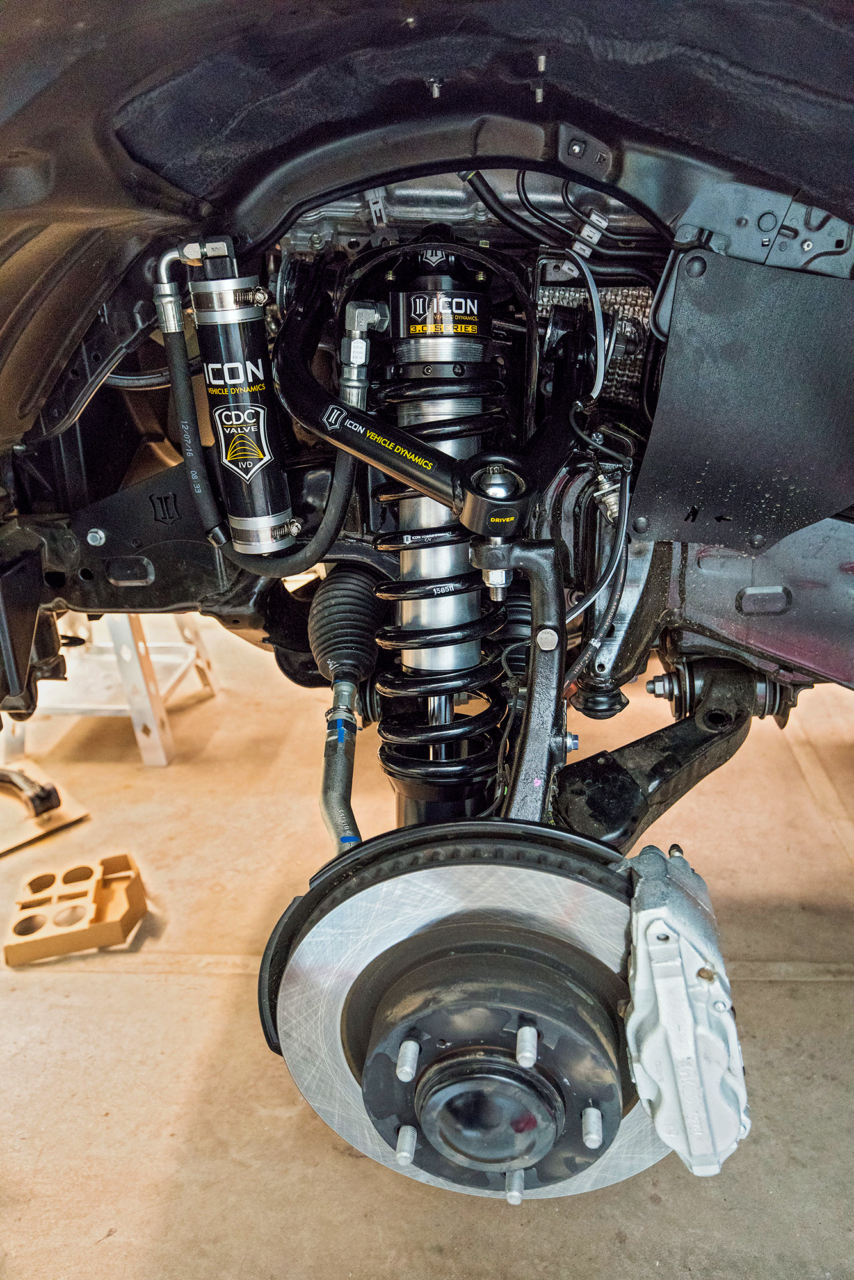 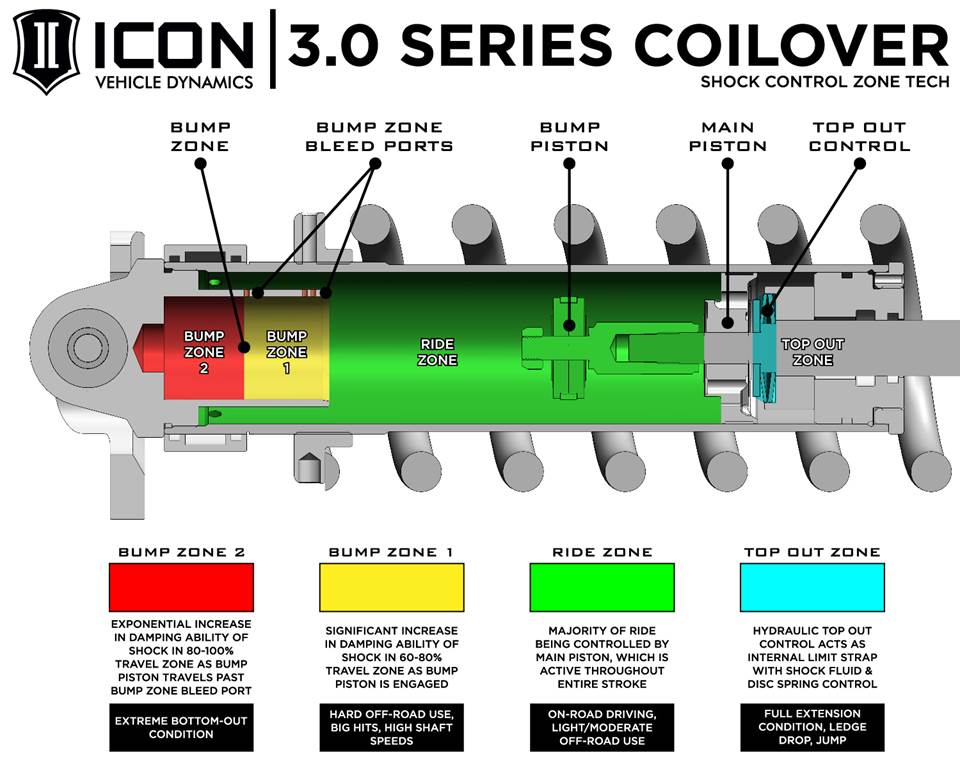 Icon’s Billet UCA’s with the Delta Joint give Project Tundra more wheel travel in the form of droop travel and the Delta Joint is far stronger than the stock ball joint.  Additional droop travel allows the tires to better stay in contact with the ground as the suspension (and thus tire) is what falls into a hole instead of the whole vehicle, keeping the vehicle more level.  The Delta Joint is a new product from IVD that combines the durability of a ball joint with the range of motion of a uni-ball.  The Delta Joint provides the benefits of both types of joints, and I’m quite eager to see how they hold up in the long run.  The UCA’s also allow for camber and caster adjustments, which can be used to help clear larger tires or dial in additional positive caster to tweak handling performance. 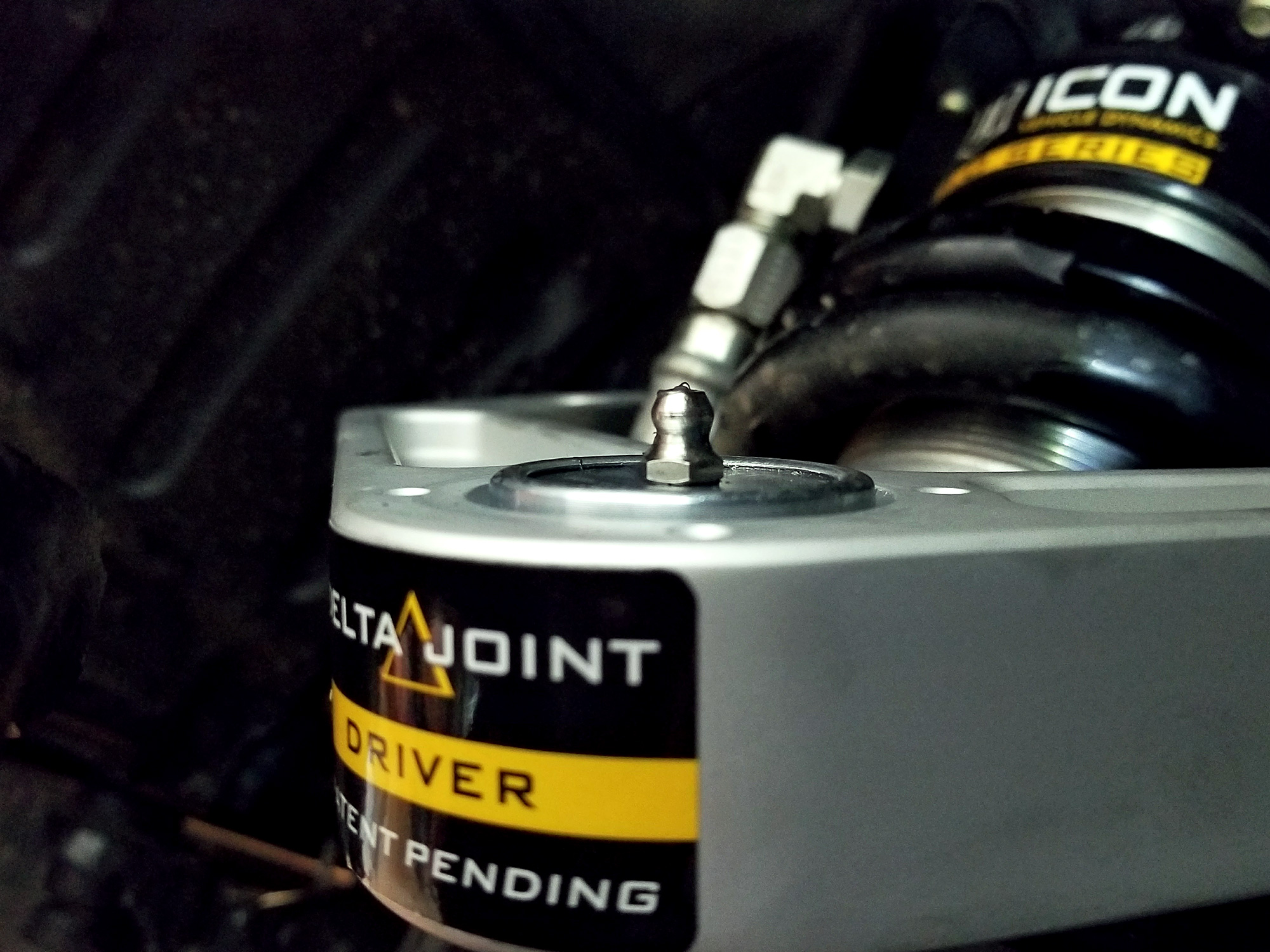 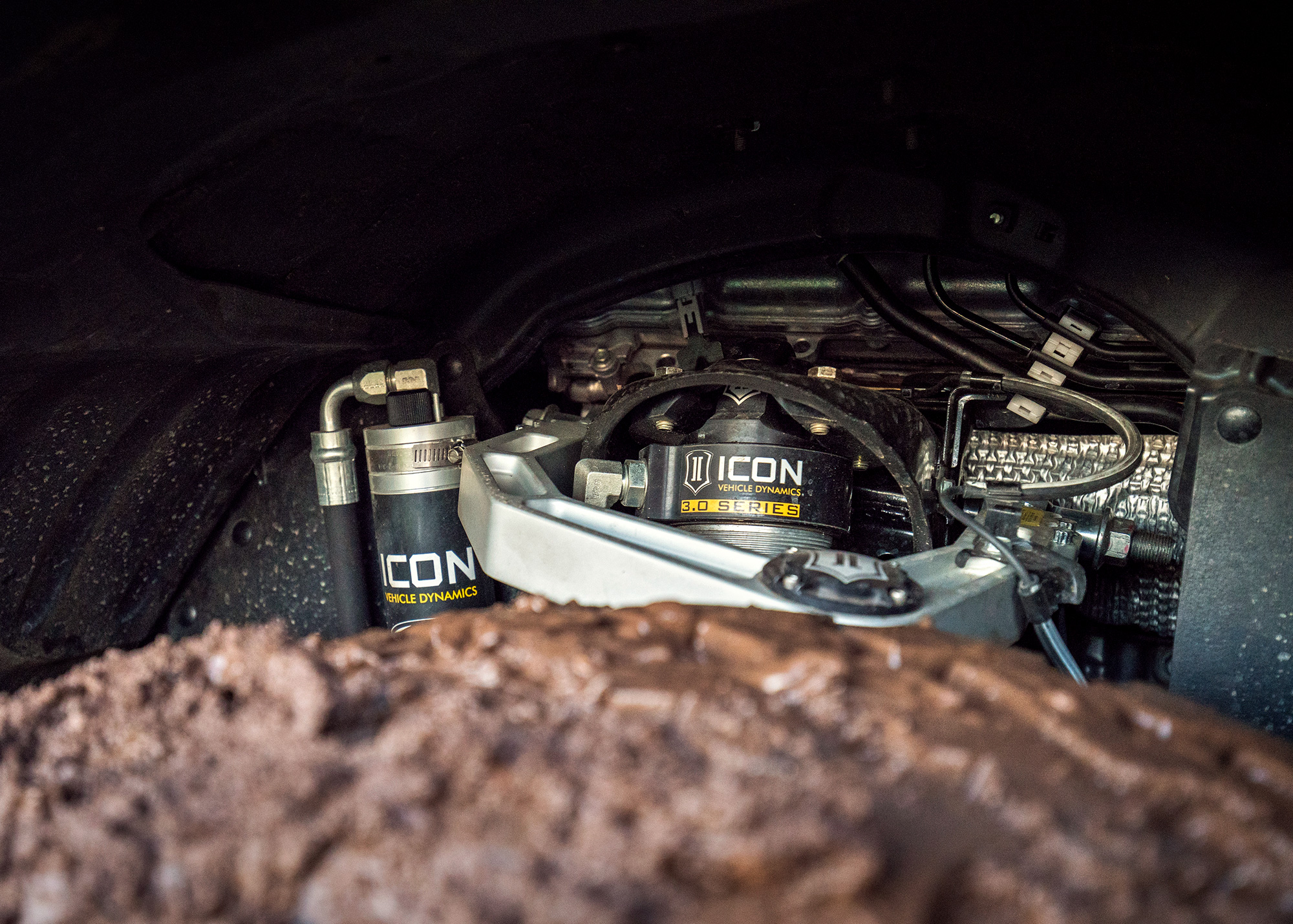 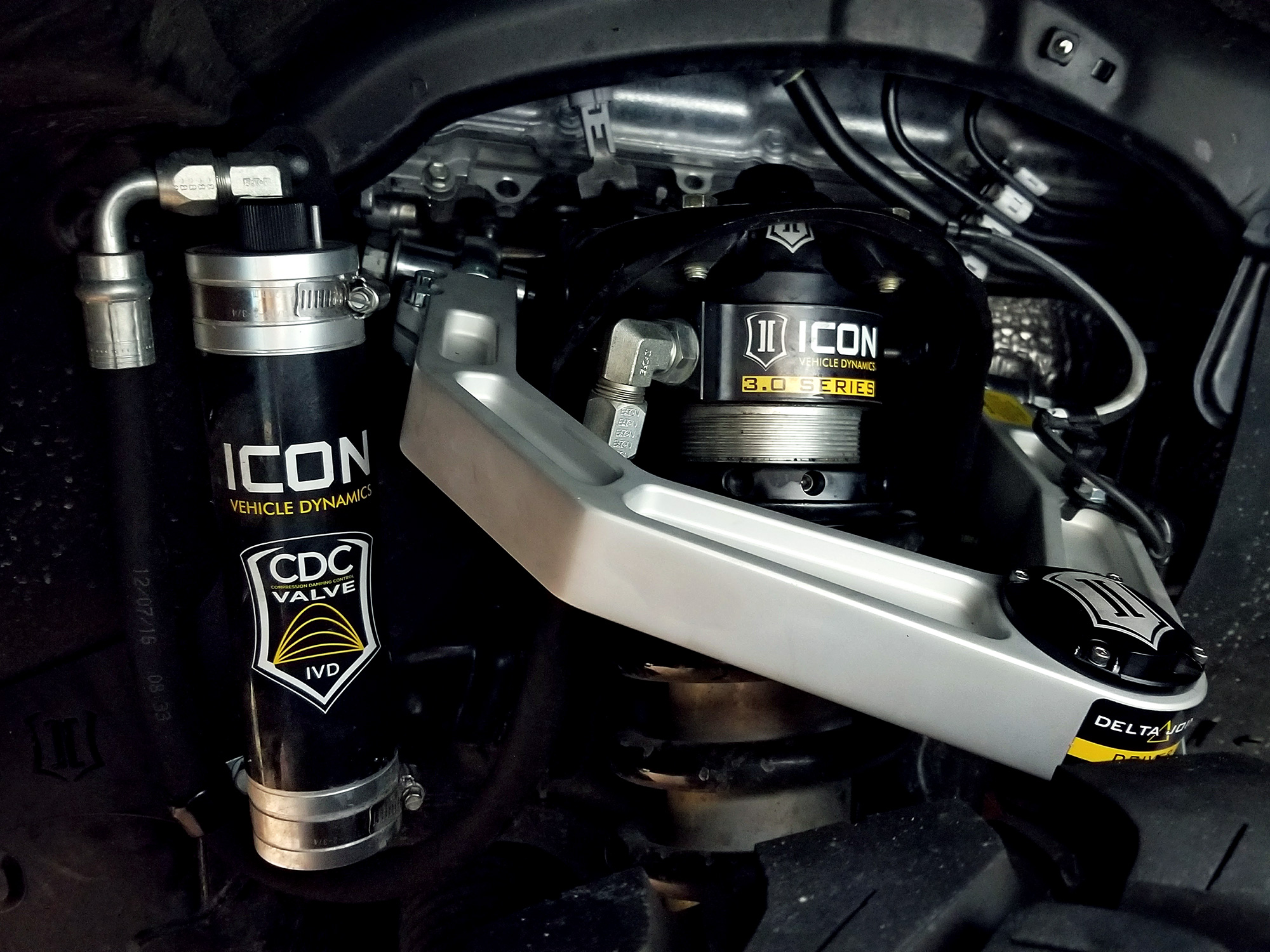 To keep up with the front end, Icon provided us with their leaf expansion pack, hydraulic bump stop system, and VS 2.5 Series PBR Rear shocks with CDCV.  The leaf expansion pack provides ~1.5 inches of lift to the back of the truck and maintains the load carrying capacity without making Project Tundra ride like a dump truck.  The pack is installed between the stock main and overload spring so that factory towing and load characteristics are retained, and lift and comfort are added.  Icon has something spring related on the horizon that will be of great interest to the overland / adventure travel community and we will be updating this article as details emerge. 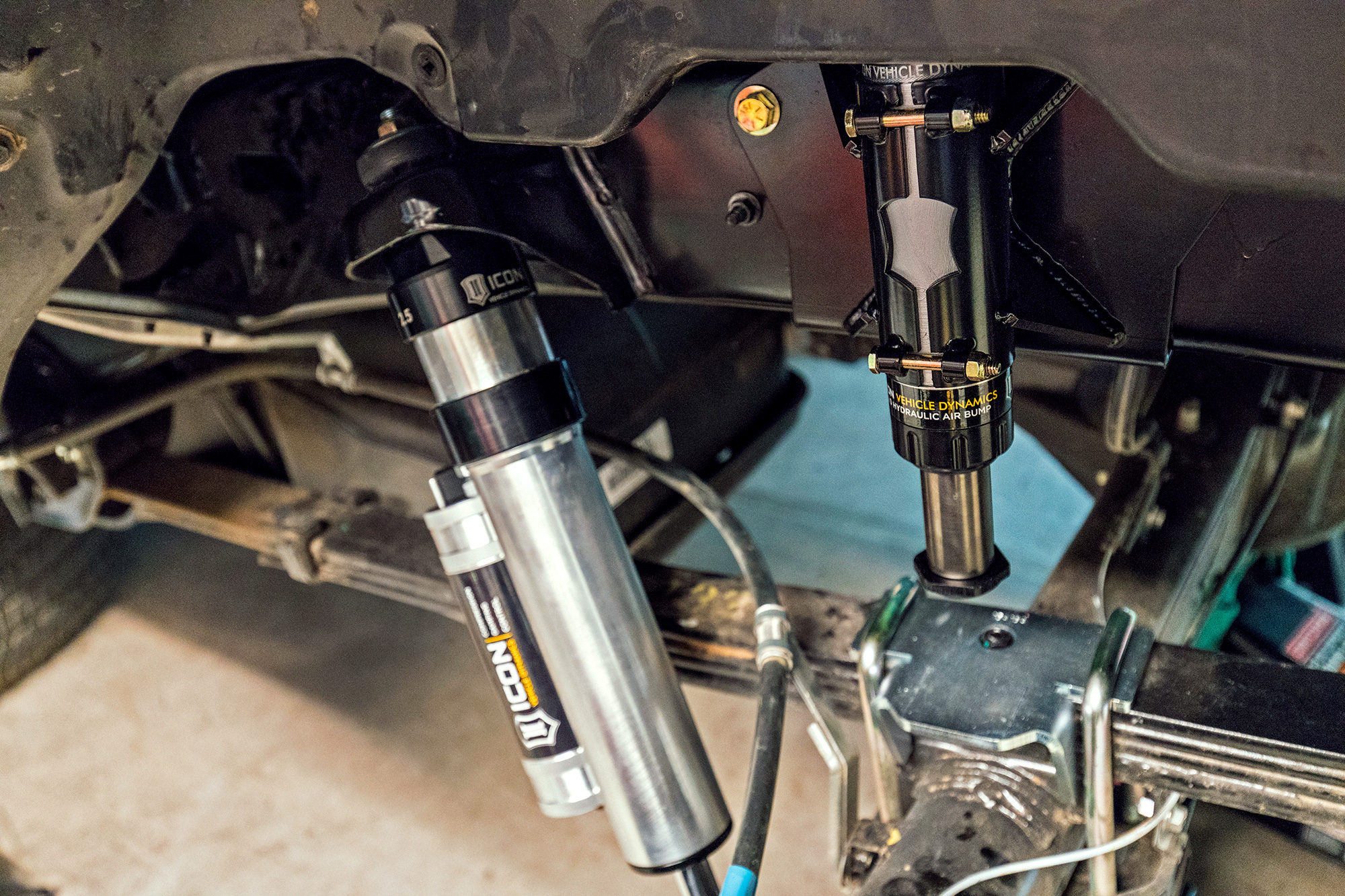 The hydraulic bump stop system was added to help keep the rear of Project Tundra in control, especially while carrying the additional loads that overland-style travel typically places on a vehicle.  Toyota’s stock bumpstops are about as soft as a lacrosse ball, and they instantly release all of the energy compressed into them right back out which can cause the back to the vehicle to kick or step out.  The bump stops provide bottom out control and are speed sensitive so that they can soak up big hard hits without limiting articulation and slow speed suspension movements. 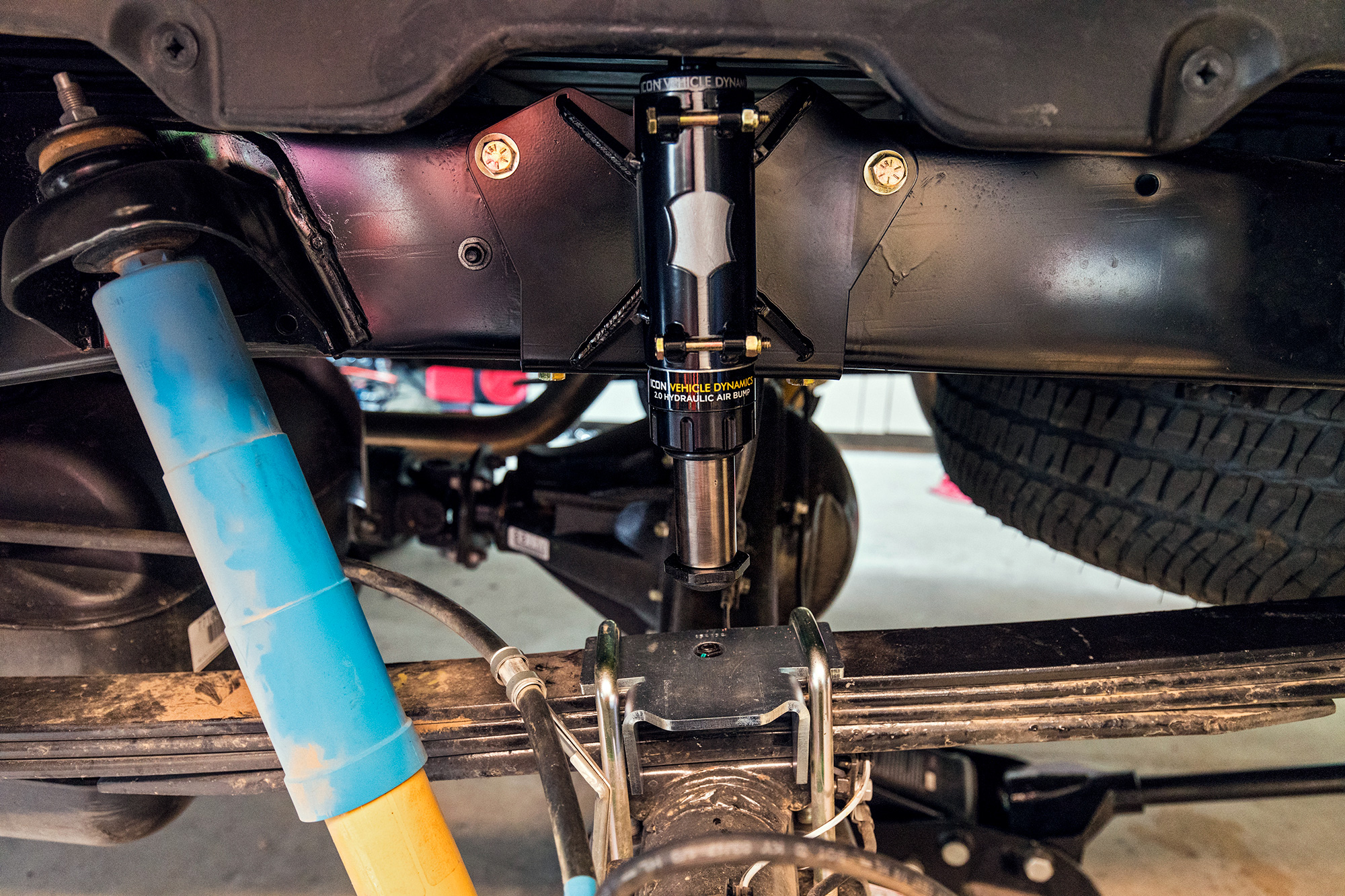 Rounding out the system are Icon’s 2.5 Series shocks with Vehicle Specific (VS) valving, and the Compression Damping Control Valve (CDCV).  VS valving is the result of spending hours playing with shim-stacks, pistons, and other suspension variables to create a shock tuned specifically to the Toyota Tundra.  The CDCV allows me to dial in the amount of compression dampening we want in all of the shocks on project tundra, so we can crank up the compression for better road handling and big hits, and back it off for a more compliant ride when we’re going slow and doing technical trails. 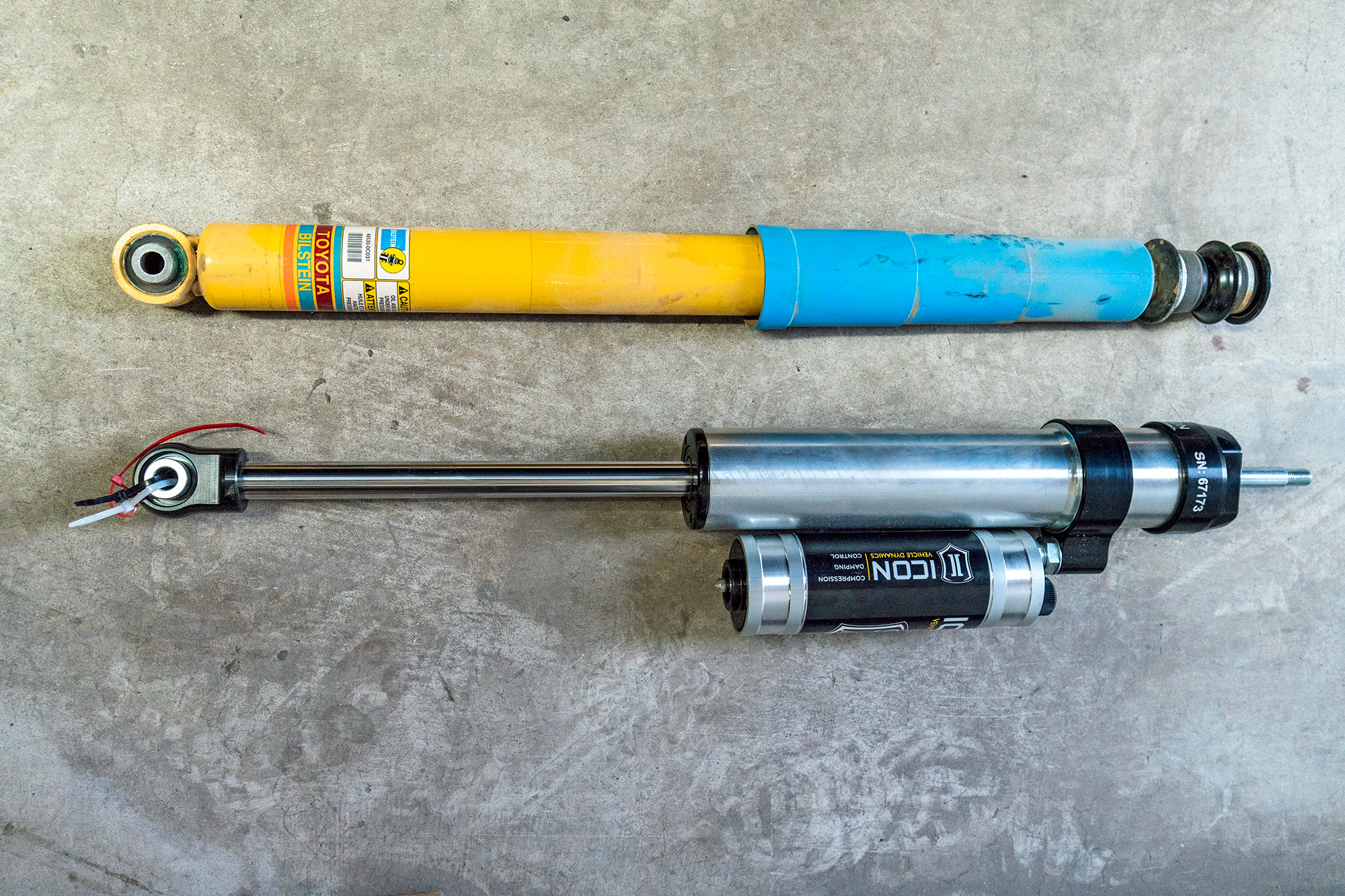 When combined with Icon’s suspension system, a set of Icon Alloys Six Speed wheels allows project Tundra to clear a true 35 inch tire. These 17 x 8.5 inch wheels were developed with a specific +25mm offset that allows for lock-to-lock steering throughout the range of travel from full stuff to full droop. We wrapped our shiny new Six Speed wheels with Falken Tire MT01’s and A/T3Ws. Keep an eye out for a long term test on their tires, and we’ll be talking all about wheels and tires in a future Project Tundra article. 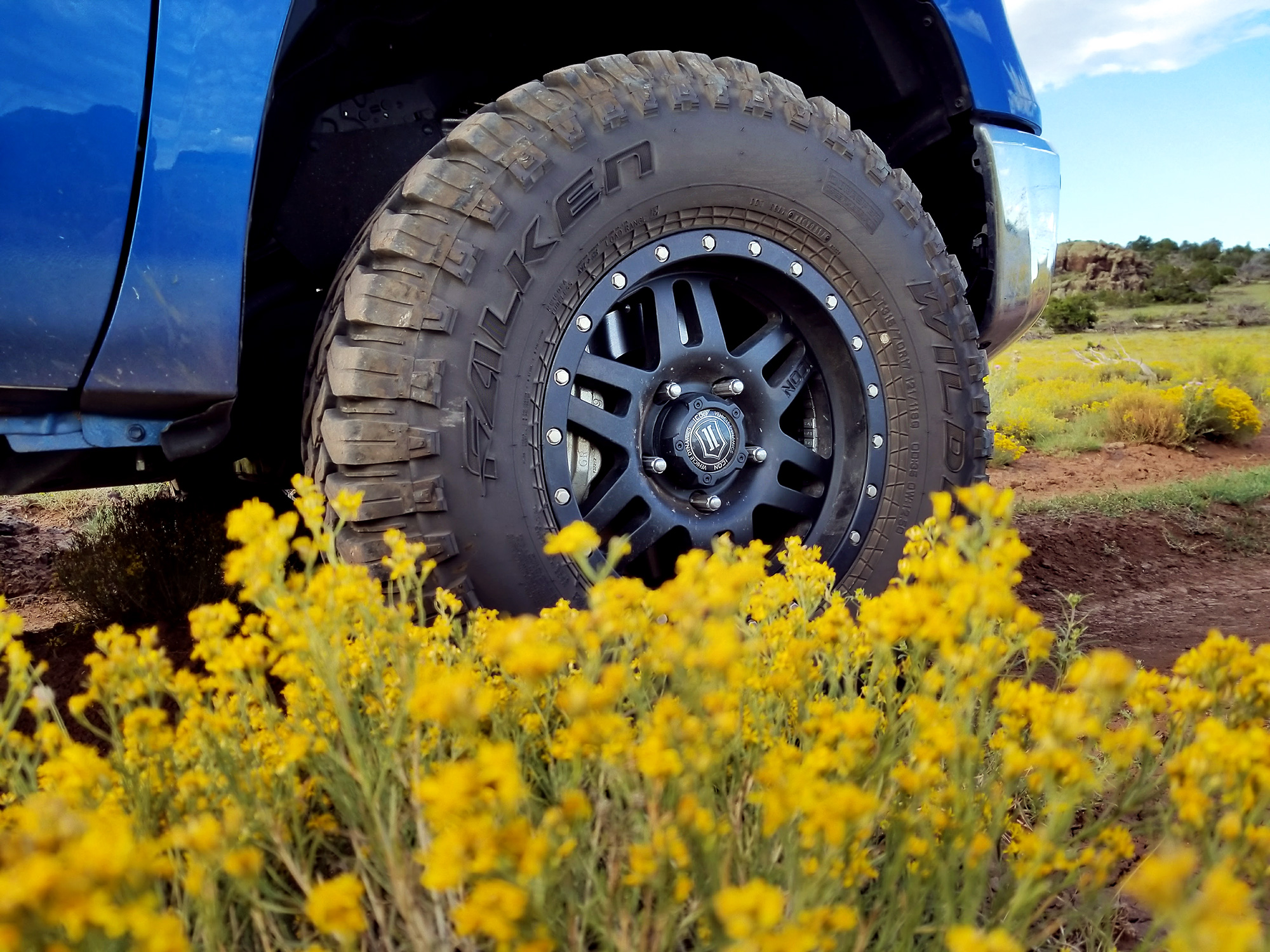 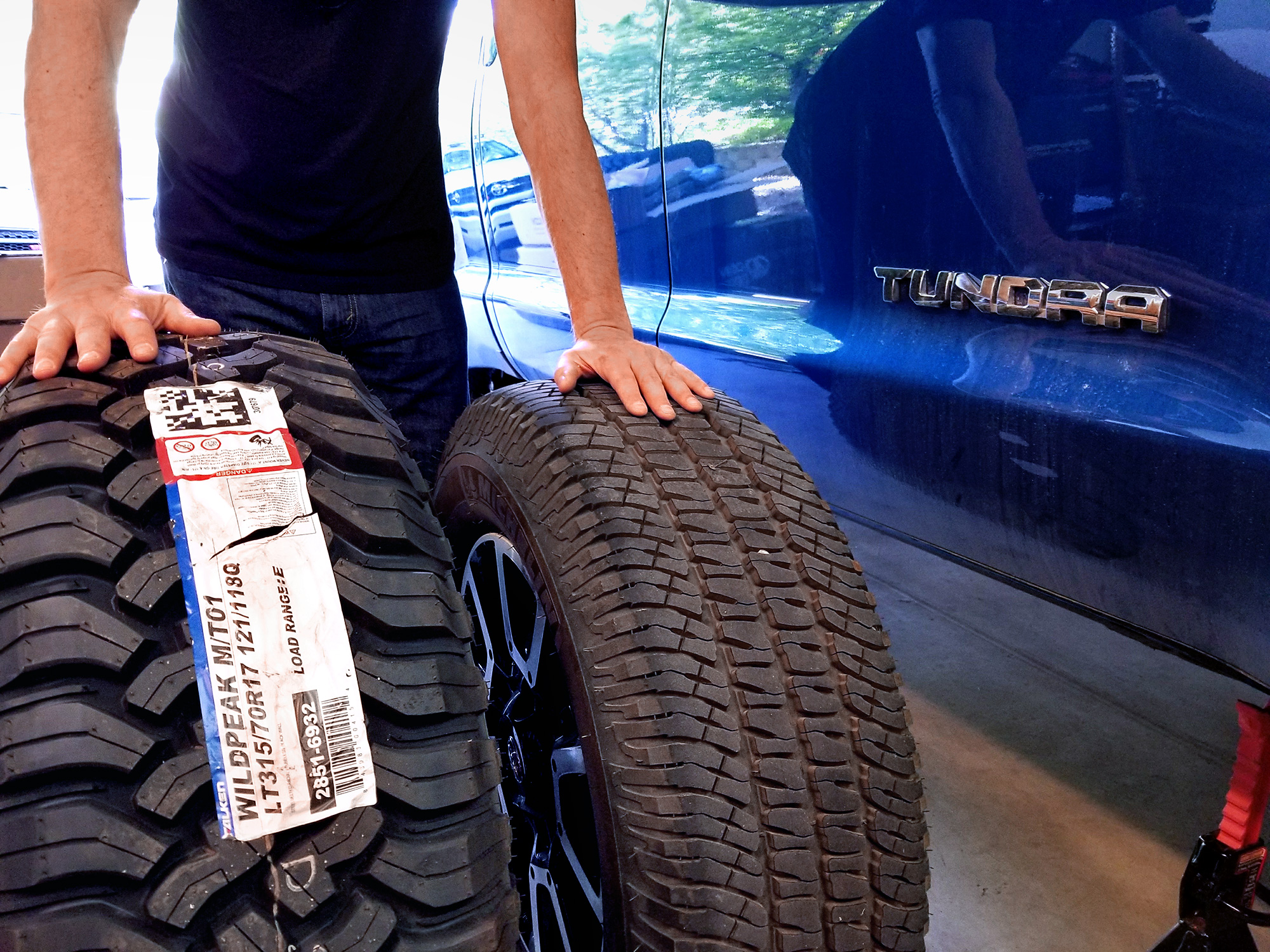 Installing all of these parts on Project Tundra took two days over the course of a weekend, and with the exception of an air chisel, no real specialized tools were required.  On Saturday, Chazz Layne and I were able to install everything on the front end with no real visits from Mr. Murphy.  You do have to cut a factory bumpstop to clear the new 3.0 Series coilover, and rather than take a corner off as the directions suggest, I opted to cut the whole bumpstop off, so that I could weld the bumpstop back on if I ever needed to in the future.  Likewise, you need to trim the ends of the swaybar, but I just opted to remove mine.  (DISCLAIMER:  AA and IVD can’t be held responsible for what you do to your truck…+LEGAL WORD VOMIT AS NEEDED)  We also had to elongate a hole on the reservoir mounting bracket, but other than that, everything was a bolt on installation easily completed in a leisurely day in the shop while stopping frequently to take photos. 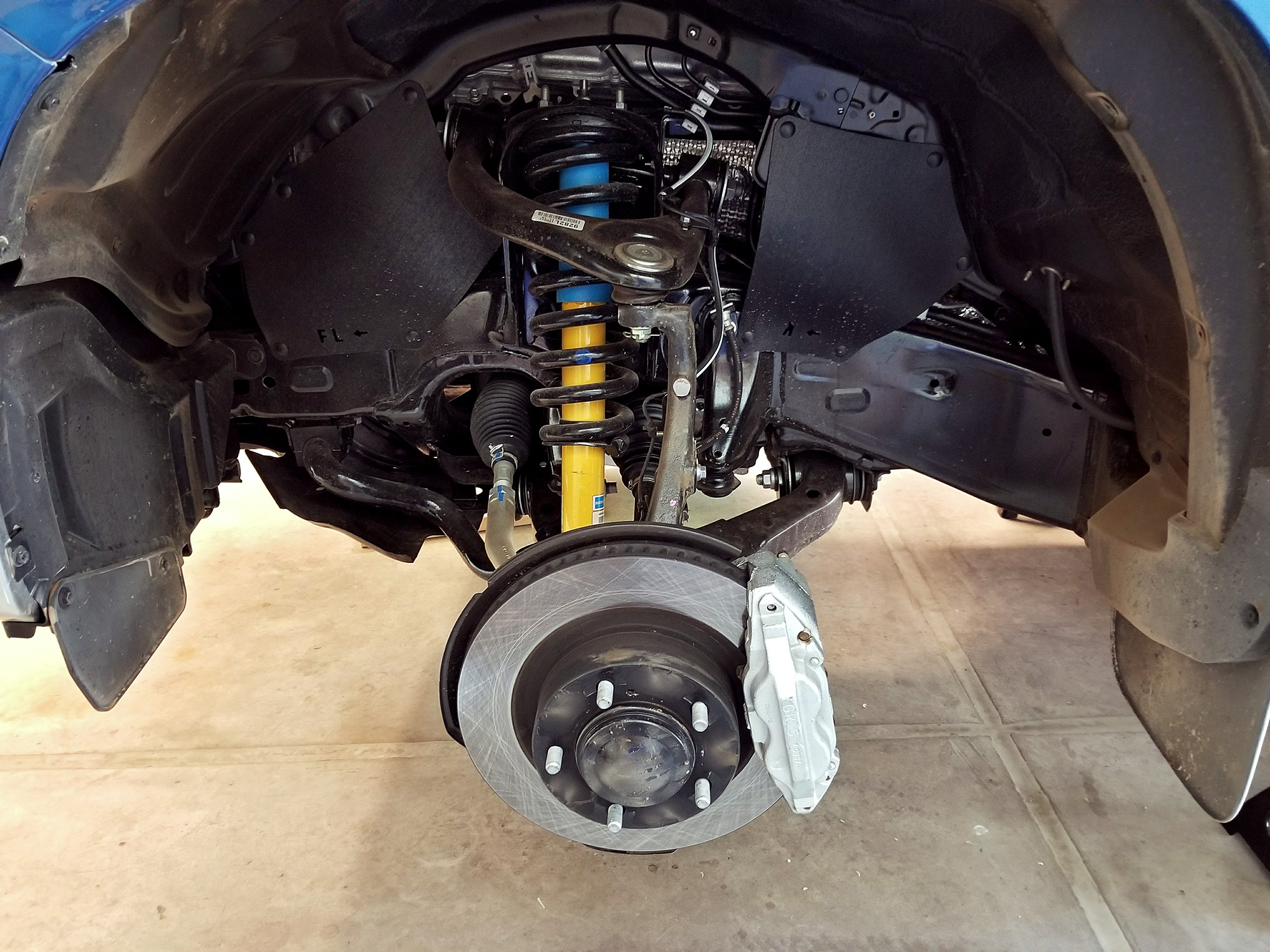 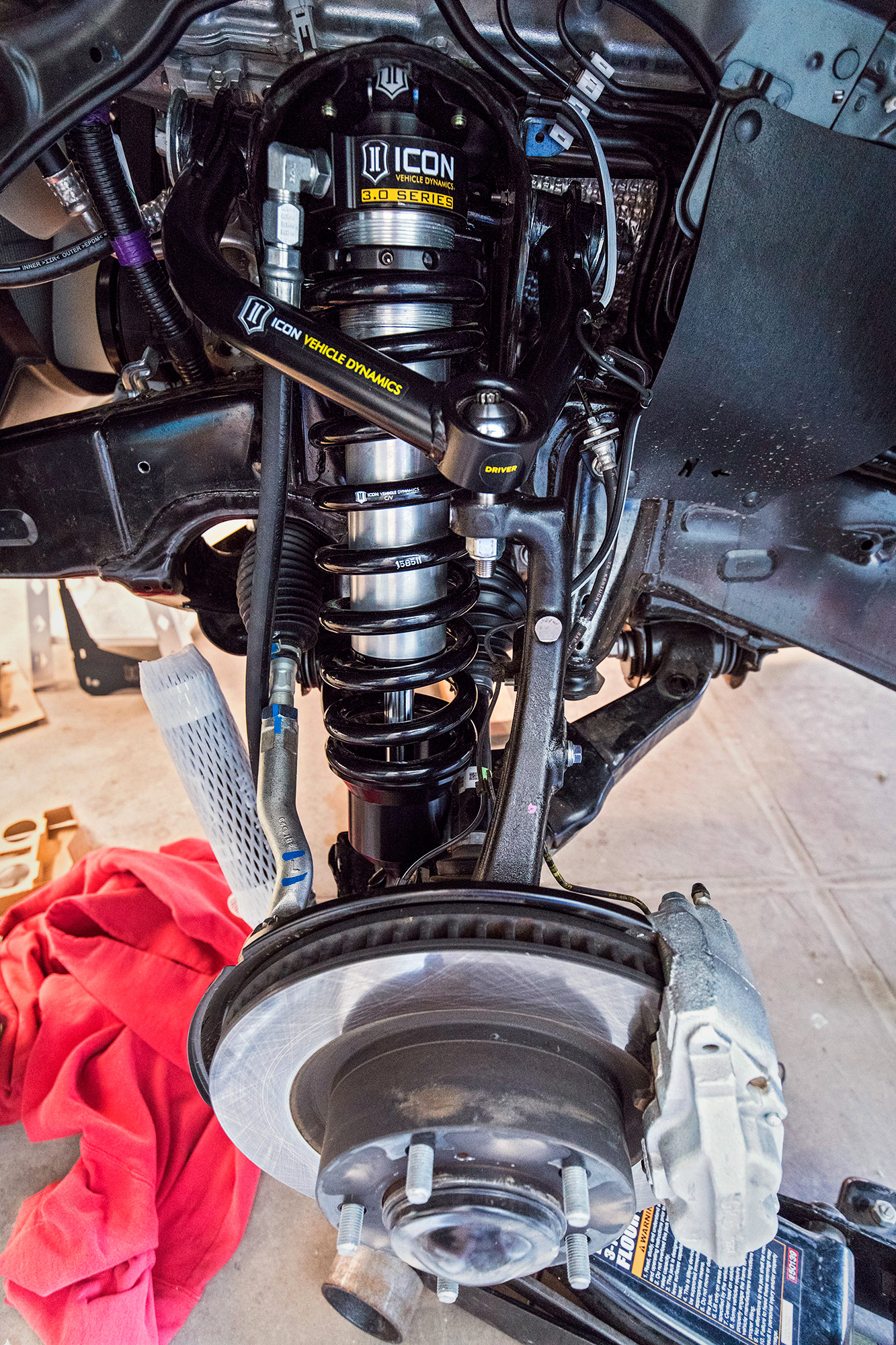 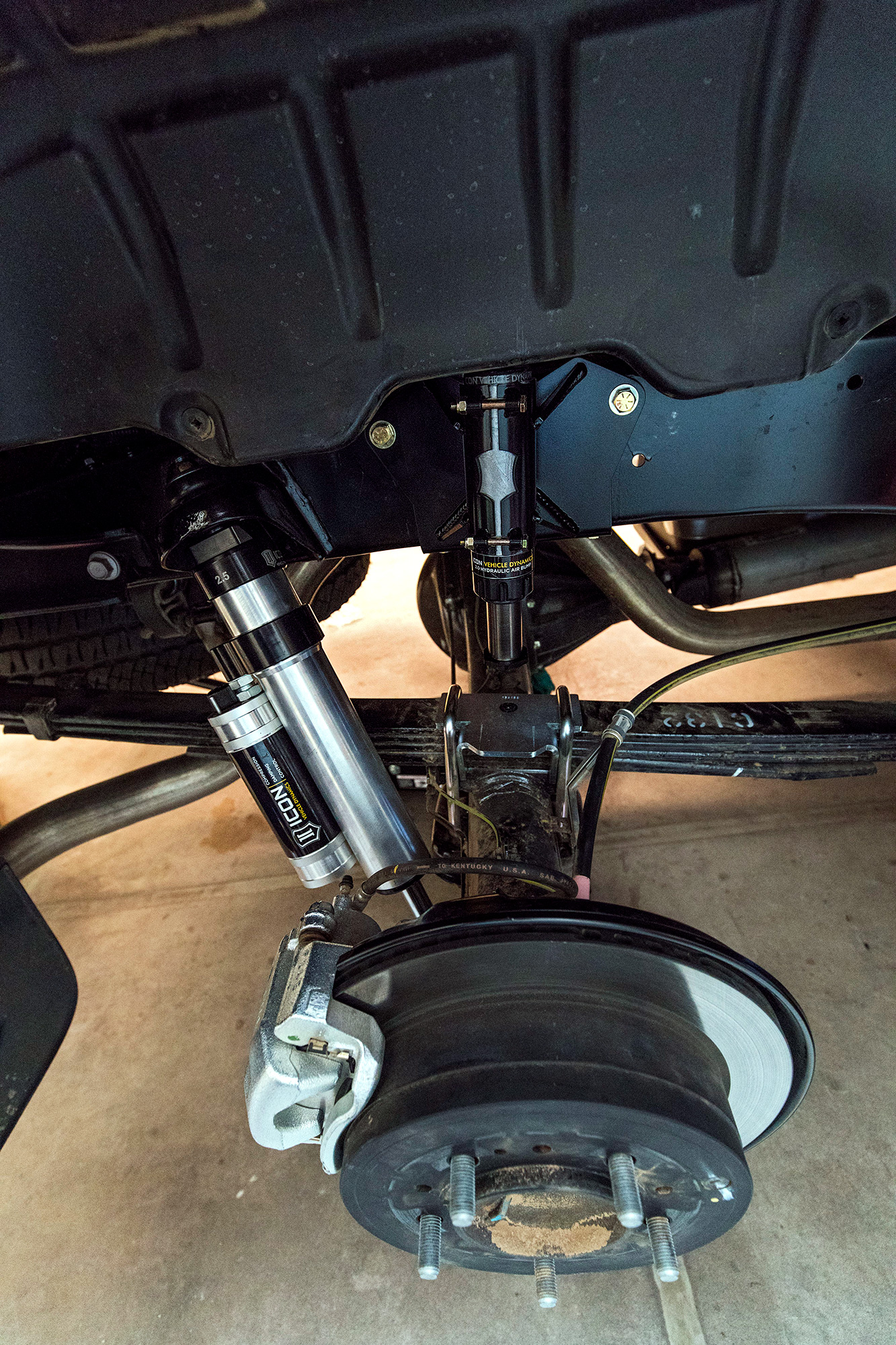 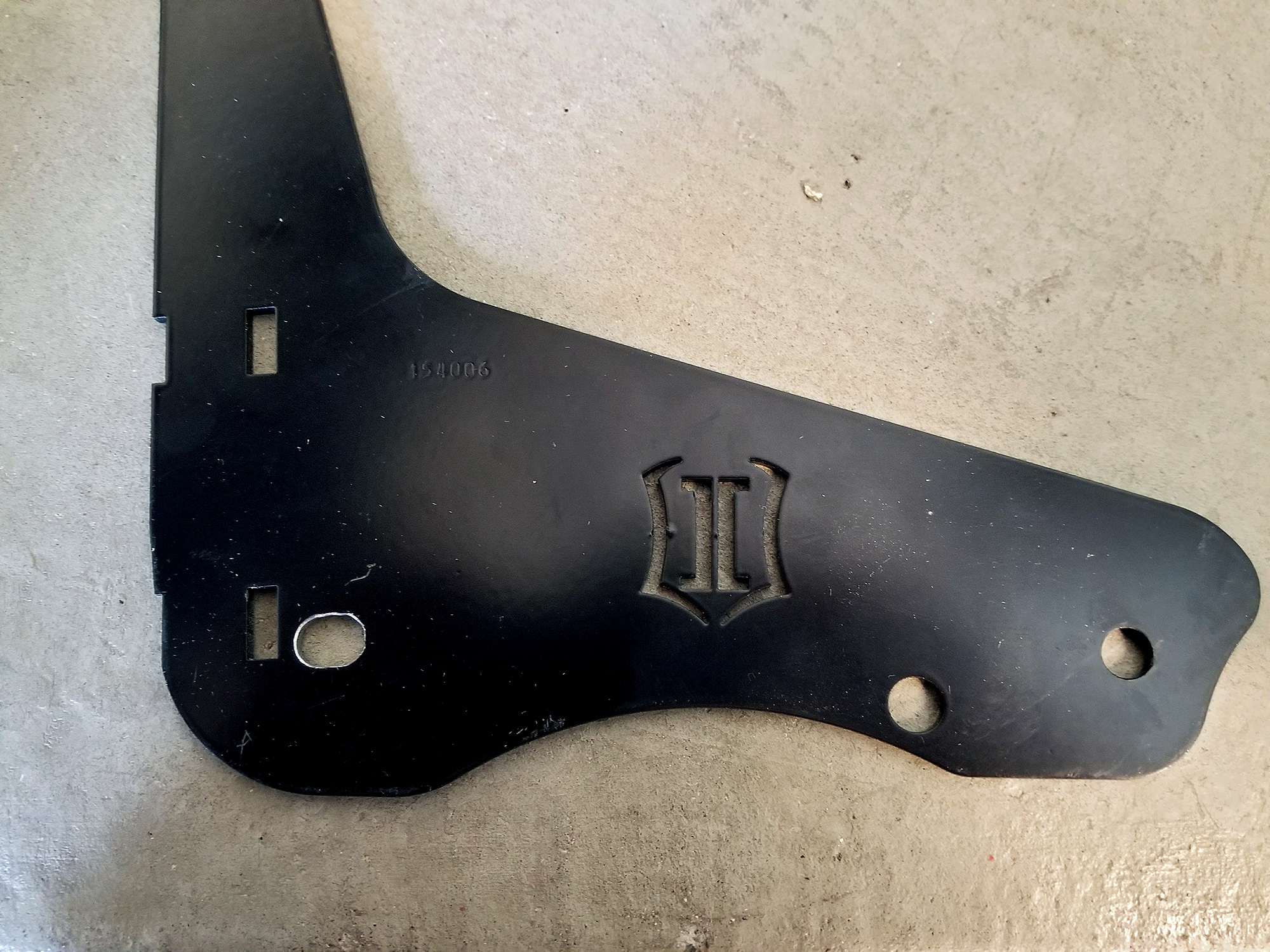 On Sunday, I tackled the back end by myself, and here’s where you’ll need that air chisel I was mentioning.  The factory bump striker plates are riveted to the frame, so you’ll need to grind / chisel these mounts off so you can install the IVD mounts.  Installing the shocks is straightforward and took me maybe five minutes in total.  Installing the leaf expansion pack is also a pretty easy process, especially if you remove the leafs from the truck and use a jack and some planning to help haul your axle around.  With everything installed and properly torqued, the next thing to do is get the truck aligned. 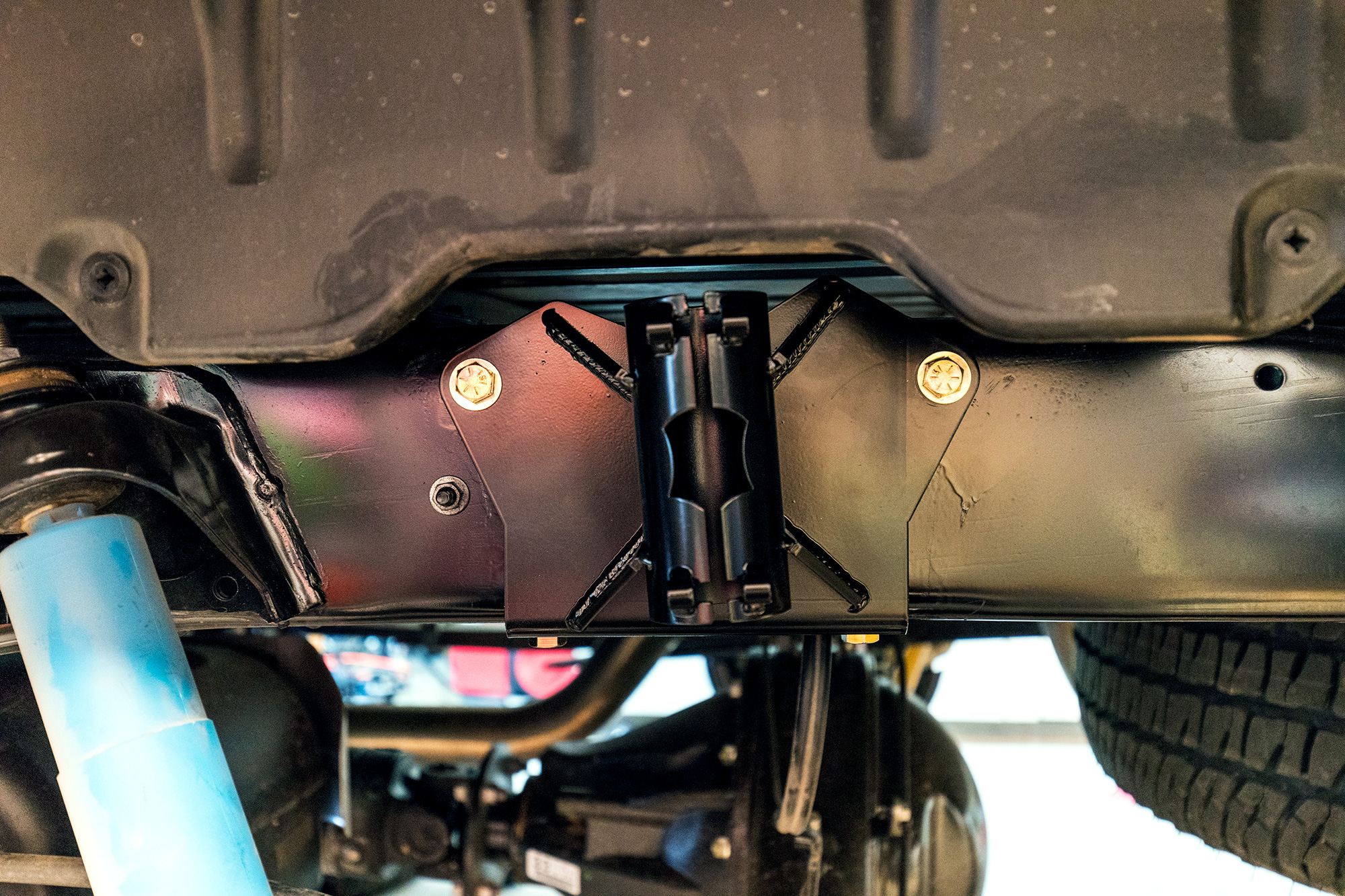 Backing out of the garage, the difference was obvious, and things only got better from there.  The installation was done the week before Overland Expo West, and over the course of this summer I’ve taken project Tundra all over the Southwest, driving on everything from desert freeways to Colorado passes.  In every type of terrain, at high speeds and at low speeds the suspension has soaked up and confidently handled everything I’ve pointed the truck at. 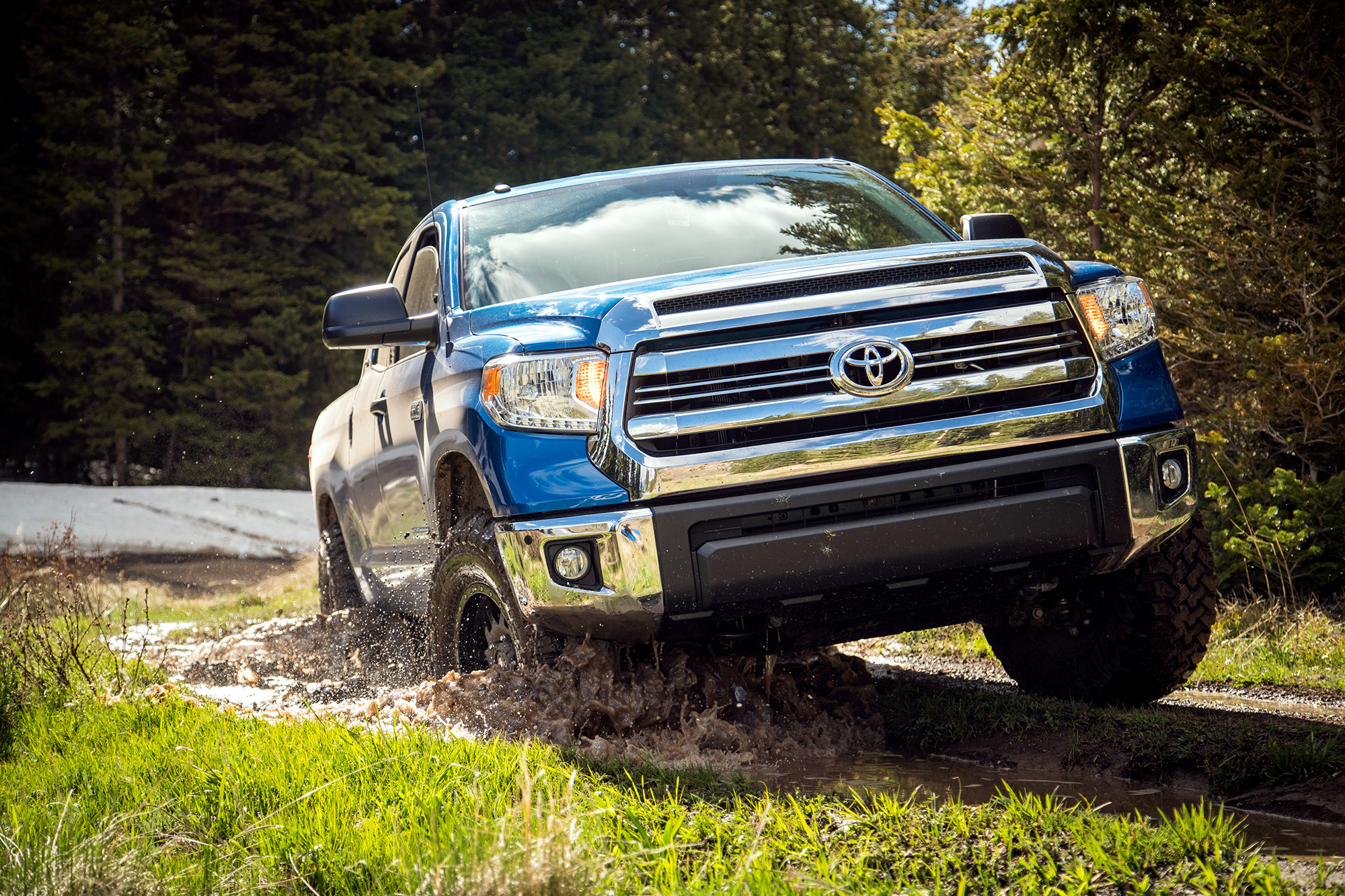 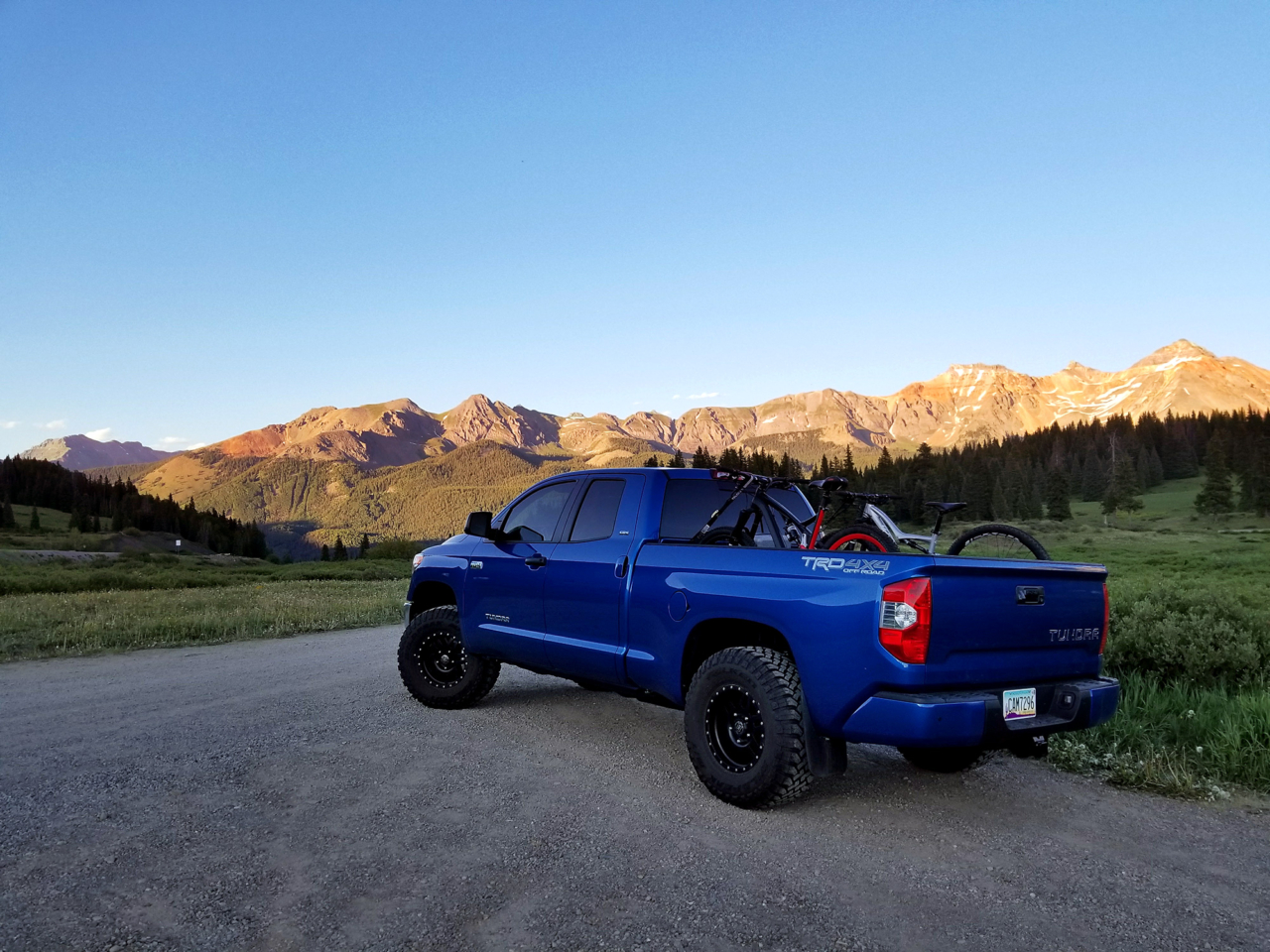 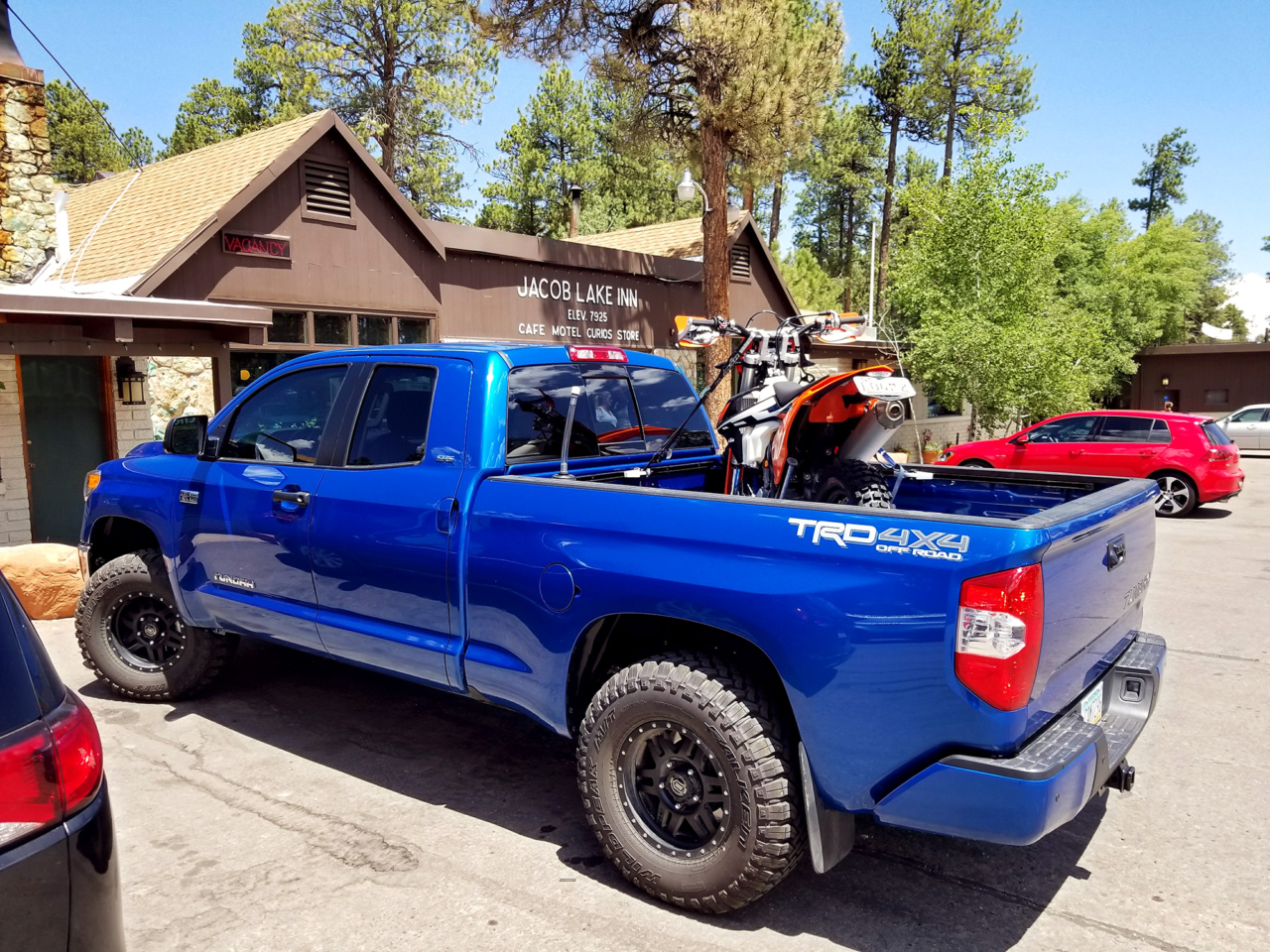 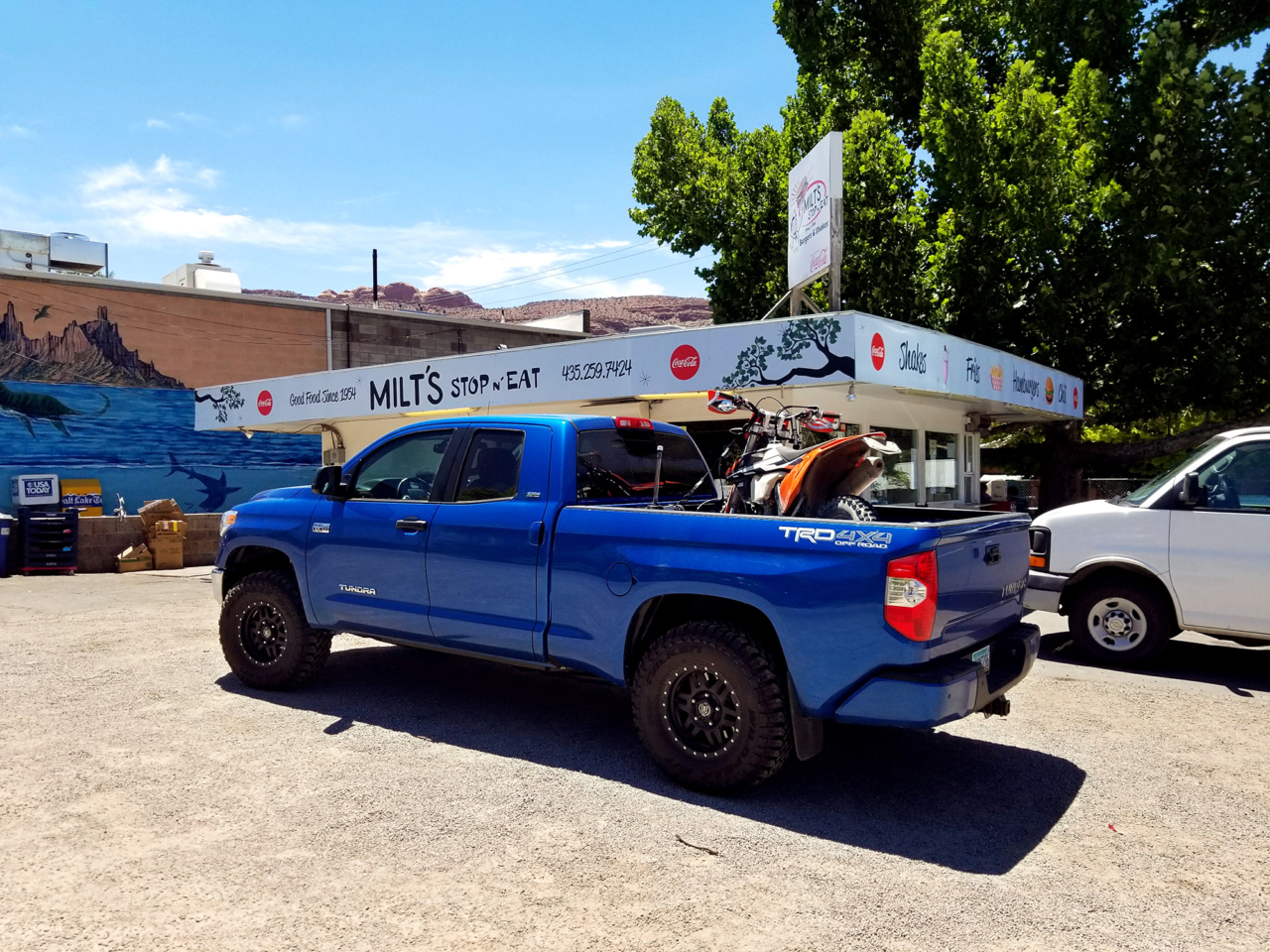 Even when loaded down with the family and toys for a long weekend of play, the truck still had outstanding handling and performance.  While the addition of cargo weight obviously sags the suspension out just like it would any vehicle, being able to add compression dampening with just a few clicks helps keep the truck’s handling in check when loaded with gear.  Where a monotube shock valved for a lightly loaded truck would blow through it’s travel when saddled with additional weight, the IVD suspension keeps things in in control with a few additional clicks of compression dampening. 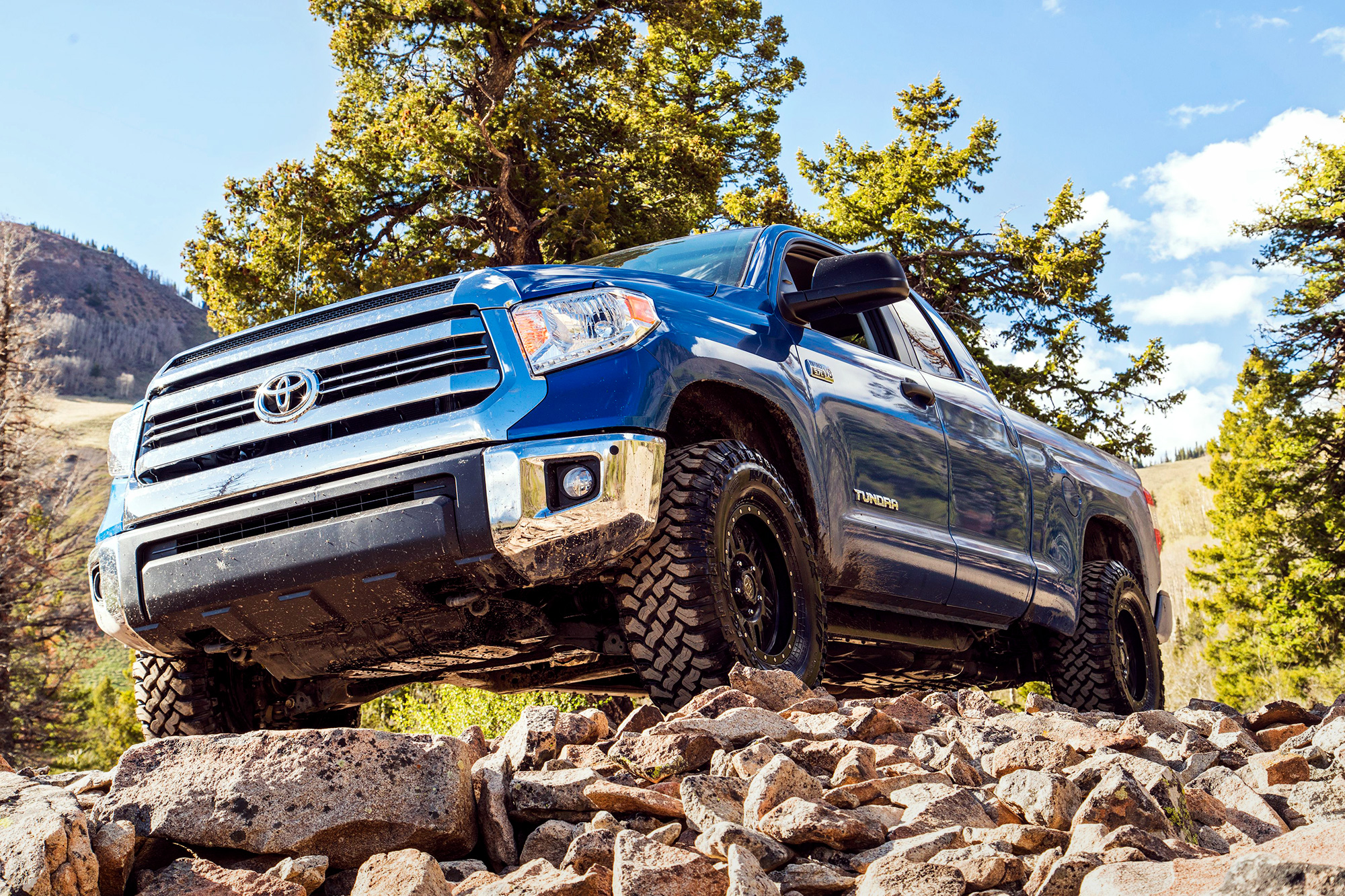 Just like any other sport or industry, the overlanding / adventure travel industry has its stigmas about what constitutes suspension perfection and about a million other ‘best options.’ Well, stigmas were meant to be broken.  If folks didn’t bother to break the mold and try something new, innovation wouldn’t be a thing, which is why I’m so glad that Icon Vehicle Dynamics is pushing their suspension into our industry.  Call it desert racing suspension or whatever you want, the fact of the matter is IVD’s suspension systems are brilliant for how we use our vehicles.  I’ve logged hundreds of thousands of miles on Australian-made monotube shocks, and while those systems work well and are certainly an upgrade from any stock suspension, they’re not on the same level as Icon suspension. 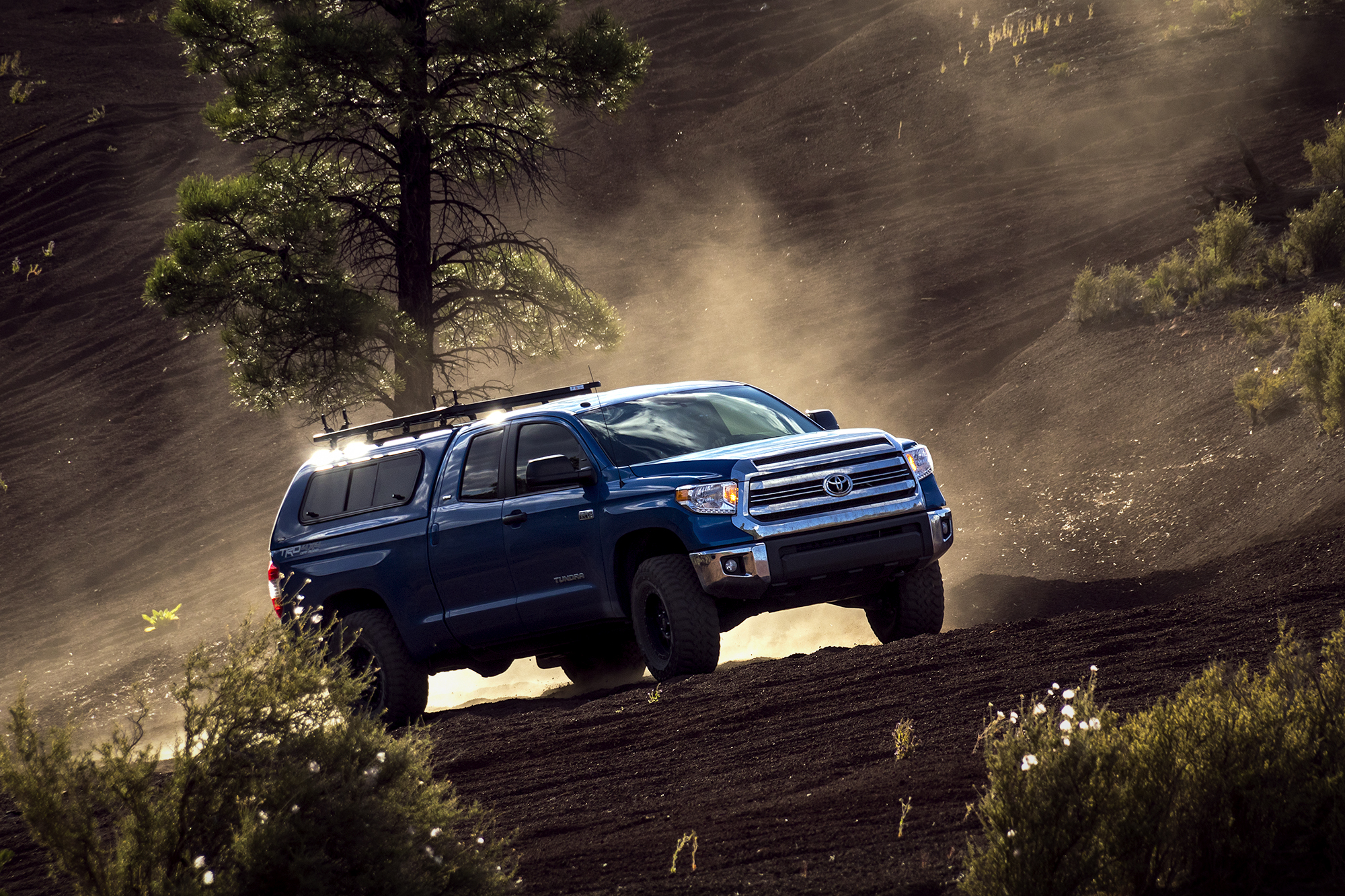 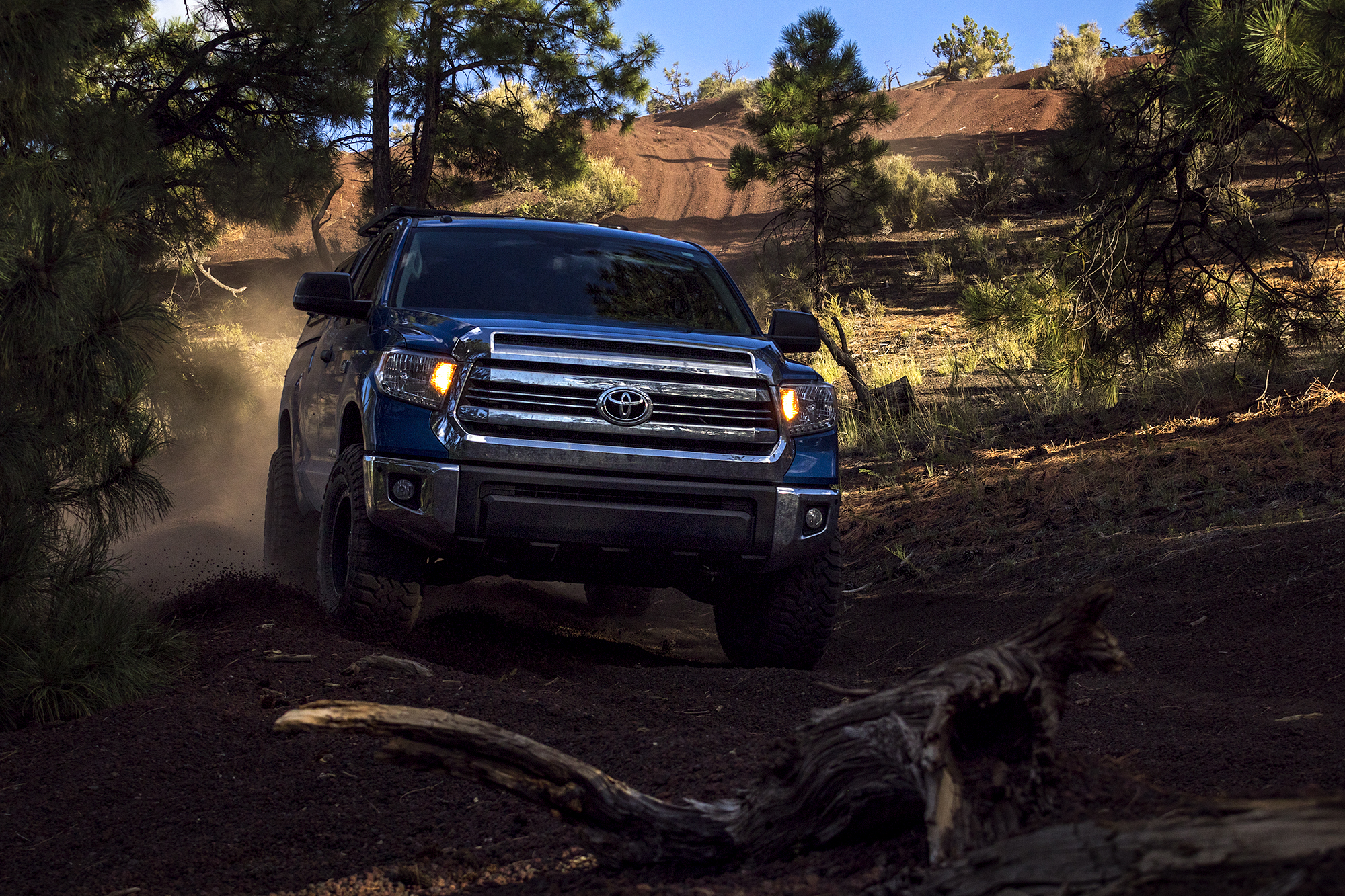 Going with a top shelf system from Icon Vehicle Daynamics is certainly going to cost more than a monotube shock setup—but this is an upgrade where you get what you pay for.  I know that conventional thinking in the industry would steer folks to stick with the tried and true, but I’m a big fan of tinkering, and trying new things.  Going with ‘desert racing suspension’ has worked out quite well for me and project tundra.  The performance (and safety) gains are night and day, and I don’t see any reason why these components wouldn’t last as long, if not longer with proper maintenance than anything else out there.  And besides, having suspension that can handle the occasional surprise whoop section or occasional airing out of the tires happens to be a hell of a lot of fun. 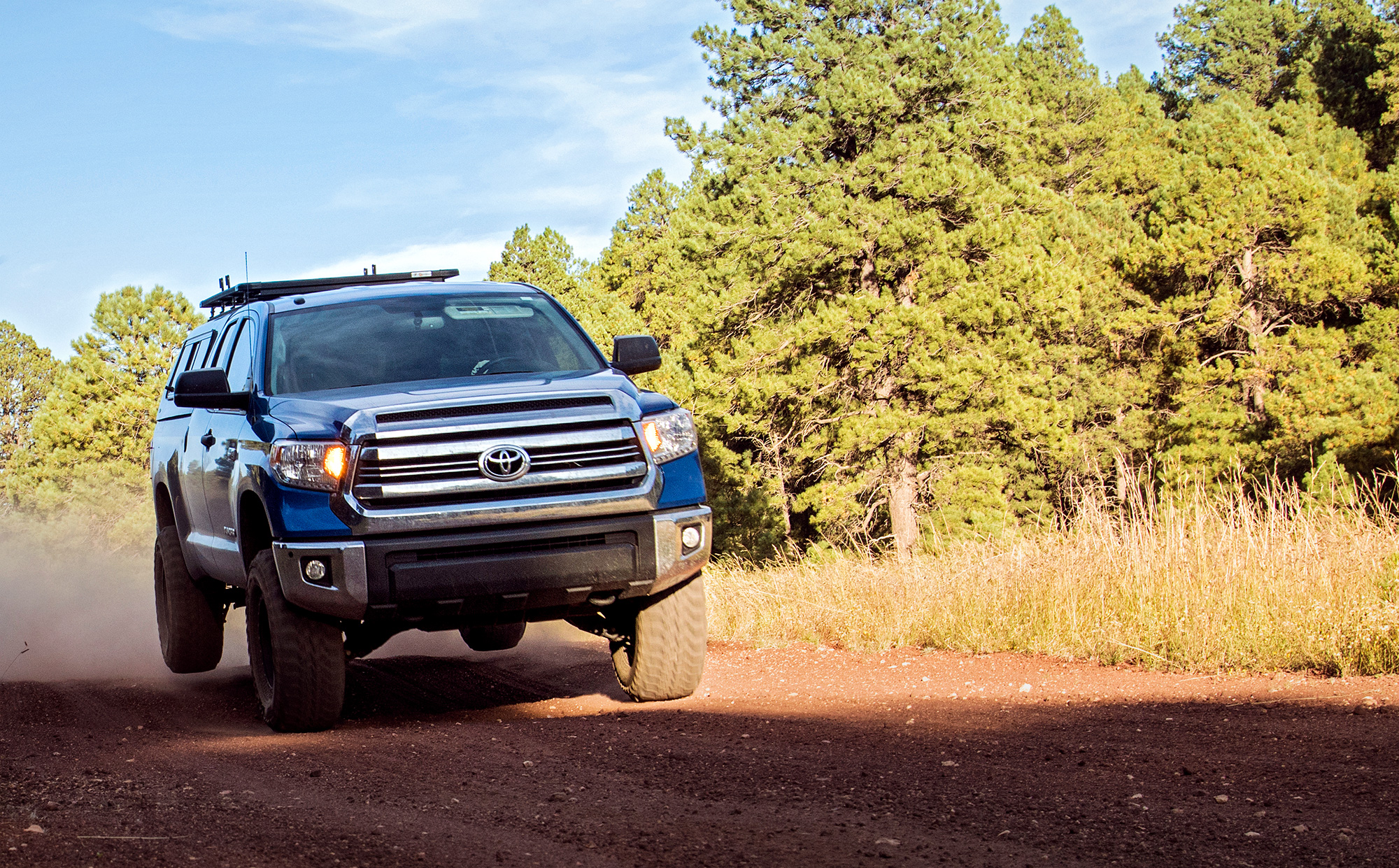 Full Disclosure: Icon Vehicle Dynamics, Icon Alloys, and Falken Tires generously contributed products for this build at no cost to Chad de Alva or American Adventurist. That said, American Adventurist staff members have been using and abusing IVD products for over a decade with zero trail failures in the some of the harshest terrain in North America.