Got a smart phone? How about five minutes to play with it?
You could be learning a new language.

These are incredible times. We hold in our hands more computing power and storage than landed men on The Moon. Today, our smart phones put the whole of human information at our fingertips. No question is too big. No question too small.

And yet, how do we most often use these amazing devices? Sadly, it’s become increasingly clear we use them to distraction. Our fear of missing out keeps glued to social media. Sensationalism combines with psychology to keep us consuming; advertising at first, followed by disposable commodities and polarizing political ideologies.

Learning a language is a great way to do this. Not only is learning another language useful while traveling, it’s also been proven to support increased attention spans and problem-solving abilities. Polyglots also enjoy improved creativity and confidence. Wouldn’t it be nice to get something useful out of our mobile devices?

Today, I’d like to tell you about a fun, free app I’ve been using to learn German. I’ve loaded this post up with screenshots from the app—actual lessons I’ve taken—to give you an idea how simple and fun it can be. 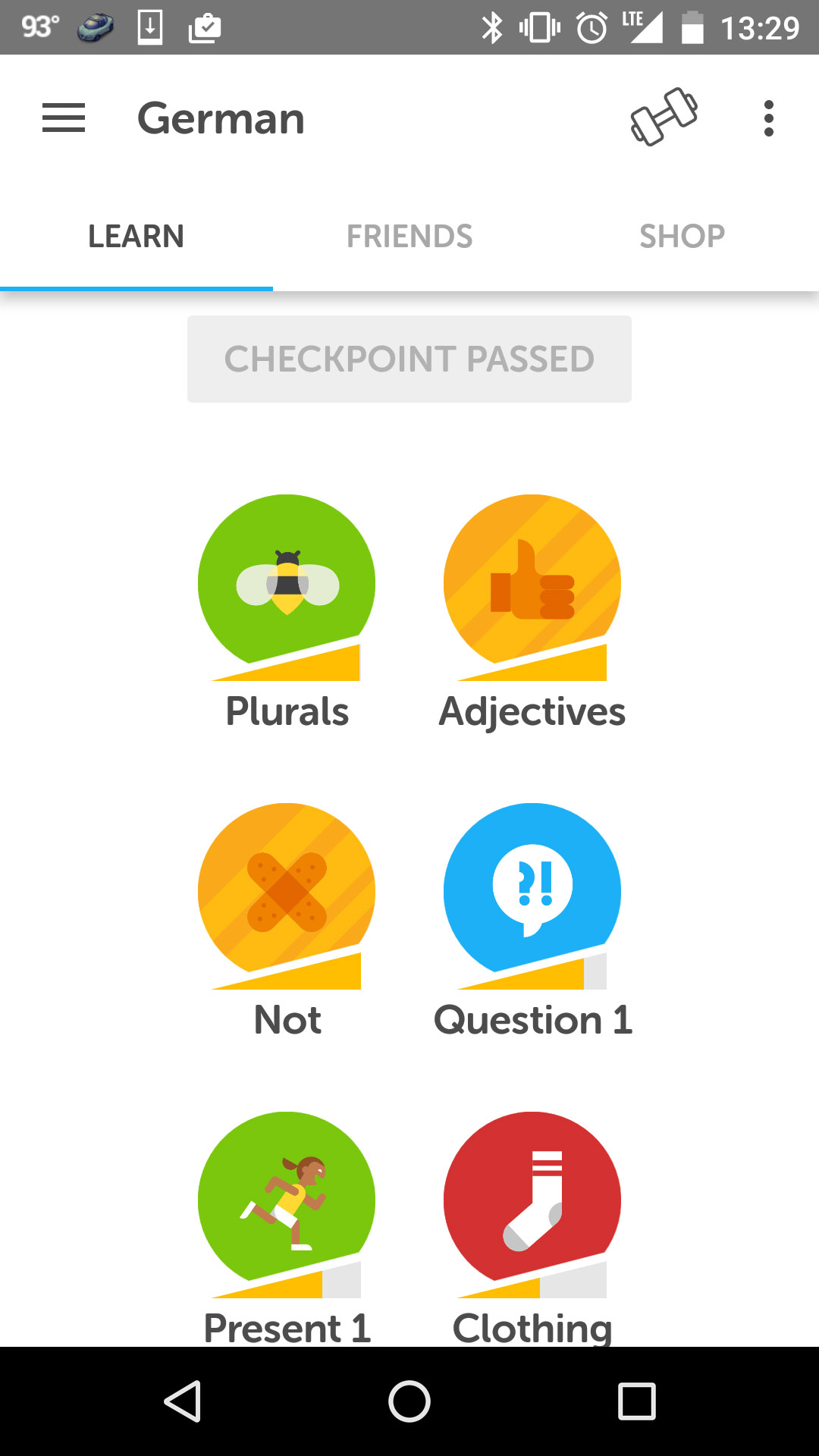 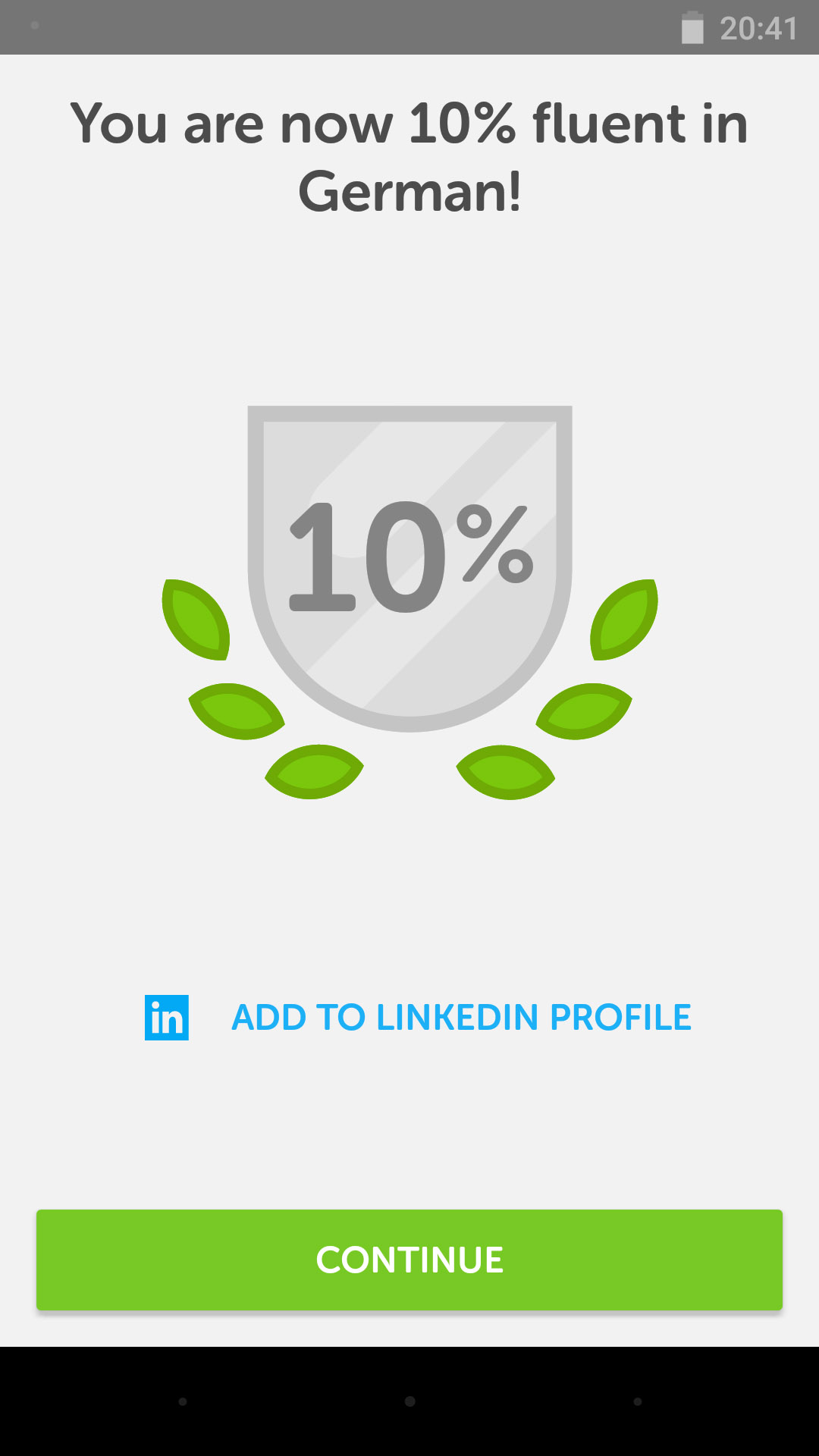 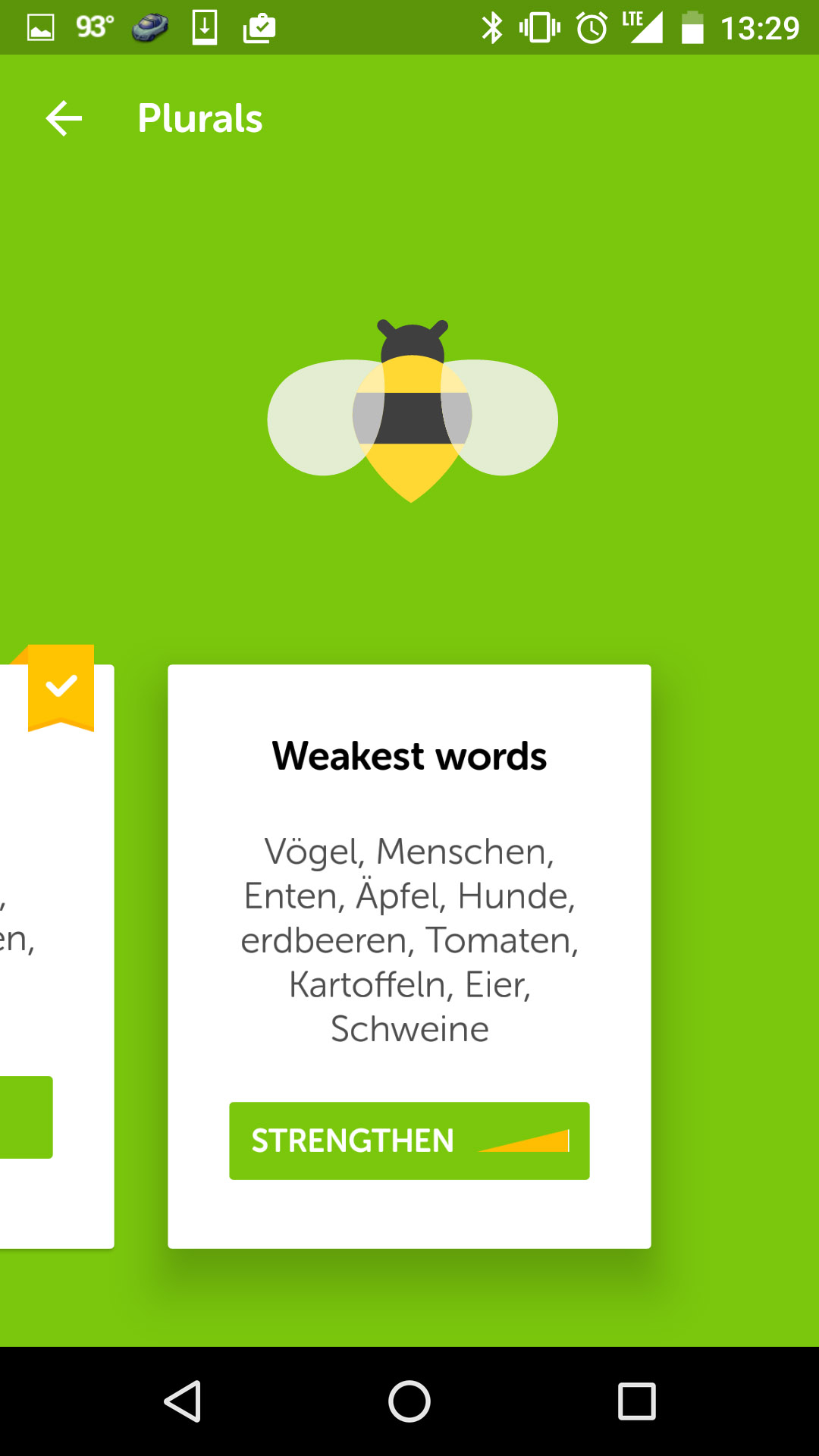 I grew up in the Army. We moved a lot. Most of those moves were within the United States, but after a 3-year stint in El Paso, Texas, where I learned Spanish in school, we moved to Heidelberg, Germany. Being a willful 7th grade-level Texan, I chose to continue my Spanish lessons while we lived in Germany.

Ironic, then, I moved back to the United States halfway through my sophomore year of high school wholly unable to have a conversation either en español or auf Deutsch. Use it or lose it, I guess. 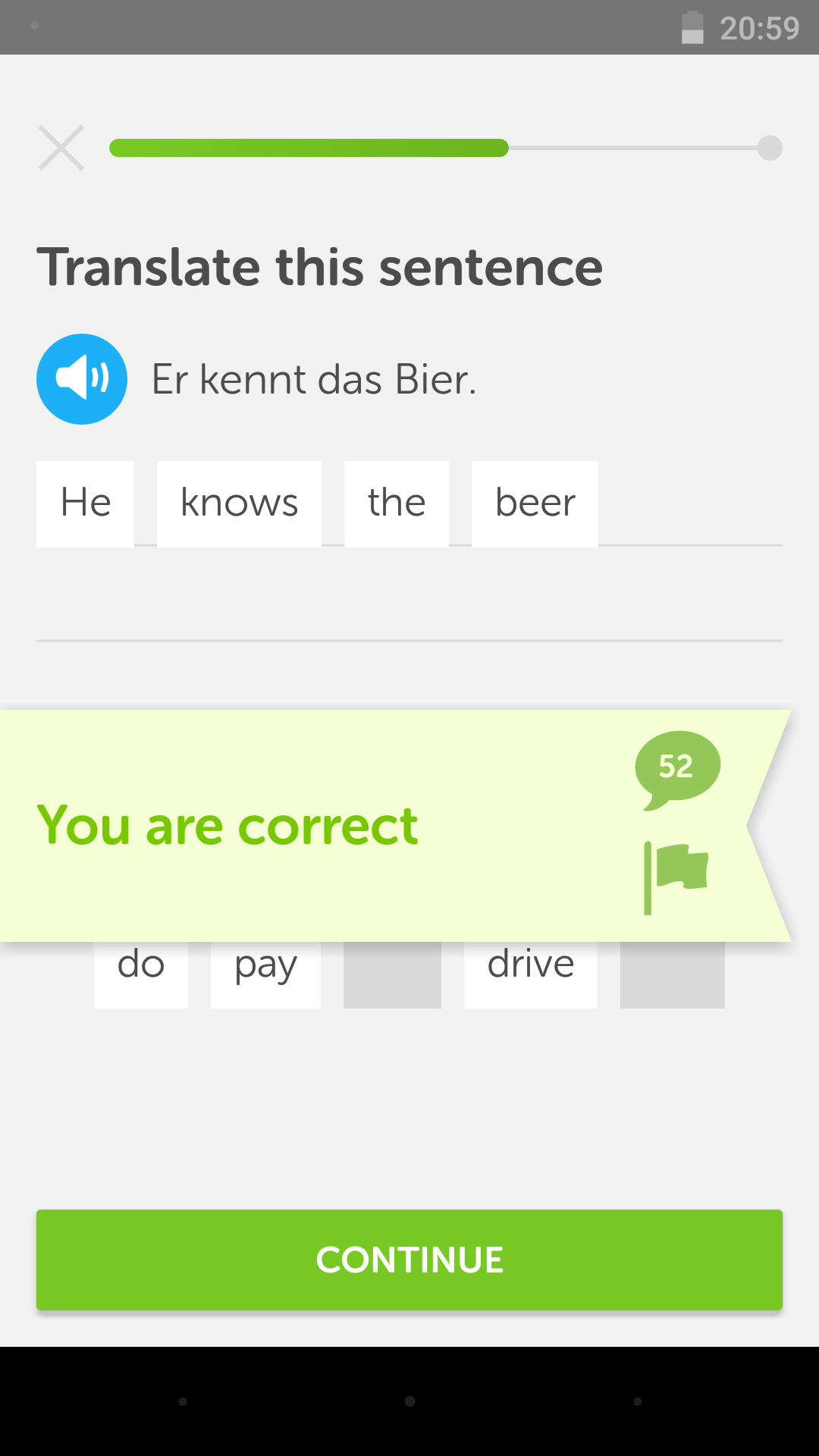 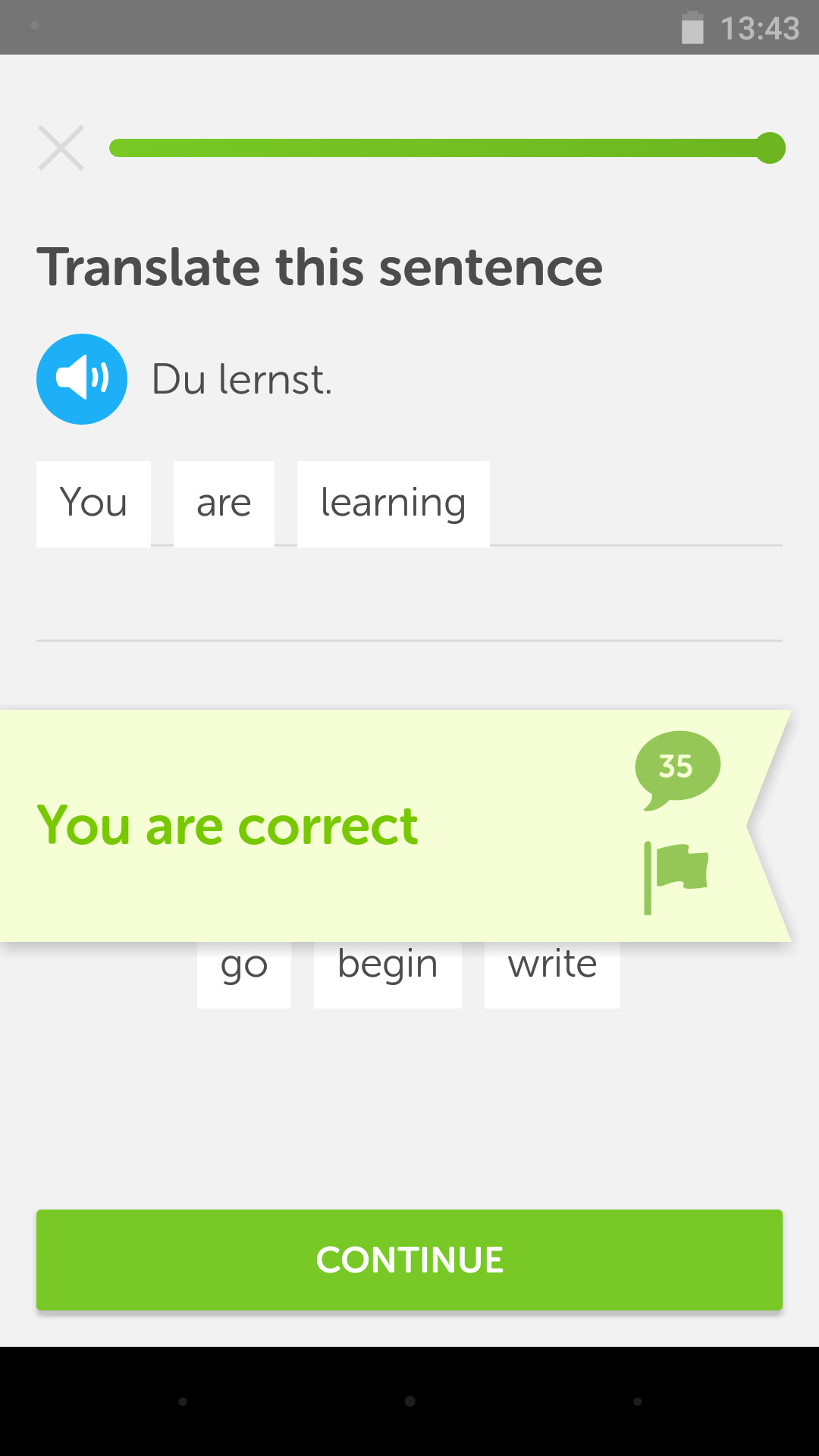 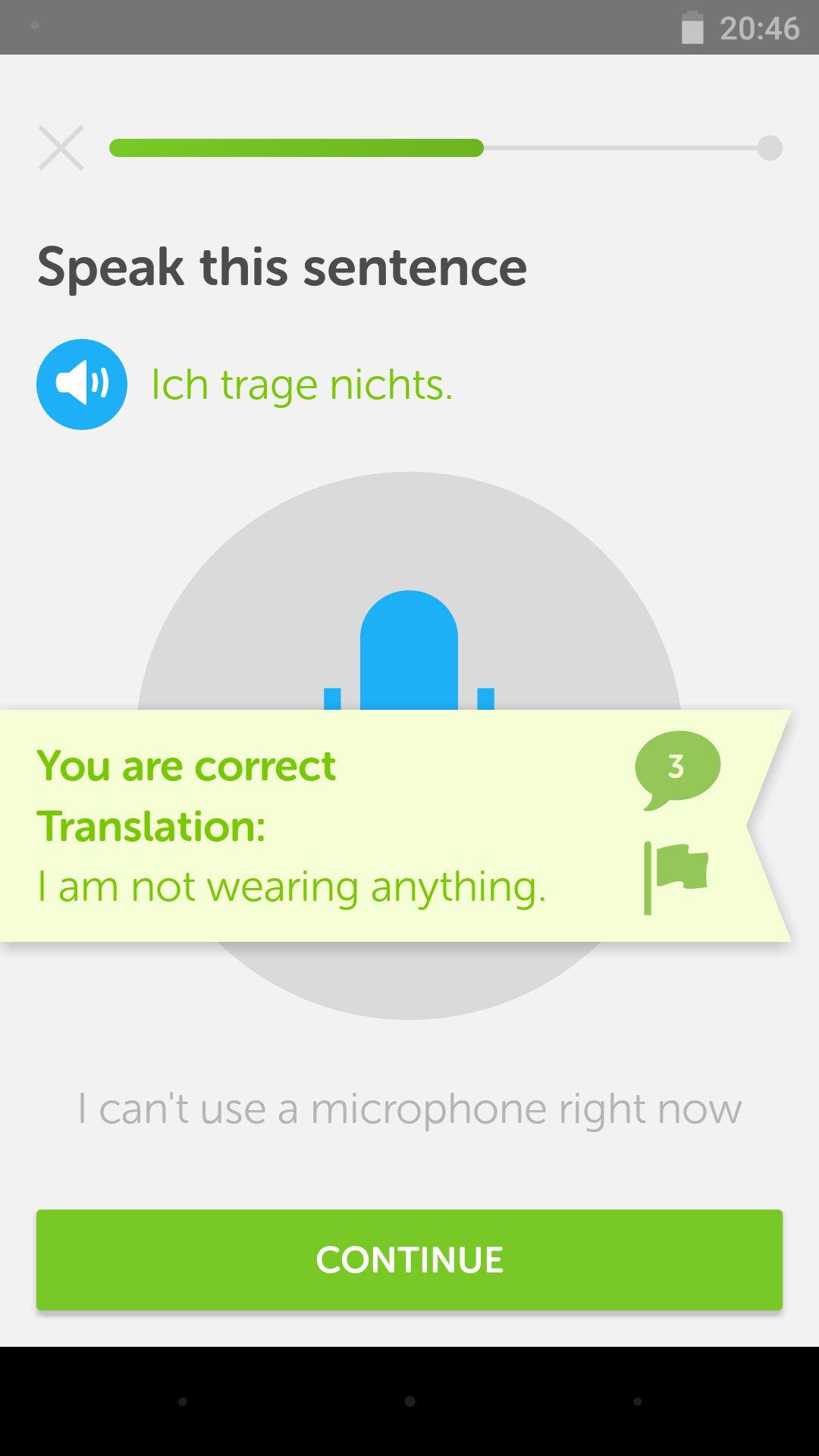 Fast forward 17 years. My wife and I find ourselves spending a day with the Baden-Wurtemberg chapter of the Mitsufruende Mitsubishi club outside Stuttgart, Germany. Aside from a few terribly pronounced necessities related to food and restrooms, all I knew how to say was “Mein Deutsch ist shrecklich.” (My German is terrible.)

This simple statement got me a laugh and a BMW (over a Chevy) at the Frankfurt Airport, but were it not for the ability of most of our new, German gearhead friends to speak almost fluent English, we would have been sunk. I returned home eager to finally start learning German.

Two years later, we went back to Europe, this time to attend the biggest Mitsubishi meet in Europe, Elbetreffen, just west of Berlin. Damnit all if I hadn’t lost track of my lessons and wasn’t any better at speaking the native tongue as we boarded our Virgin Atlantic flight to Heathrow.

It’s been over four years since we were in Germany and my German is STILL terrible. But that’s changing a little every day. After at least six years of starting and walking away, I’ve finally developed a fairly consistent practice. Every day at lunch, after taking my one-mile walk around the block, I pull out my phone and complete a single German lesson with Duolingo. 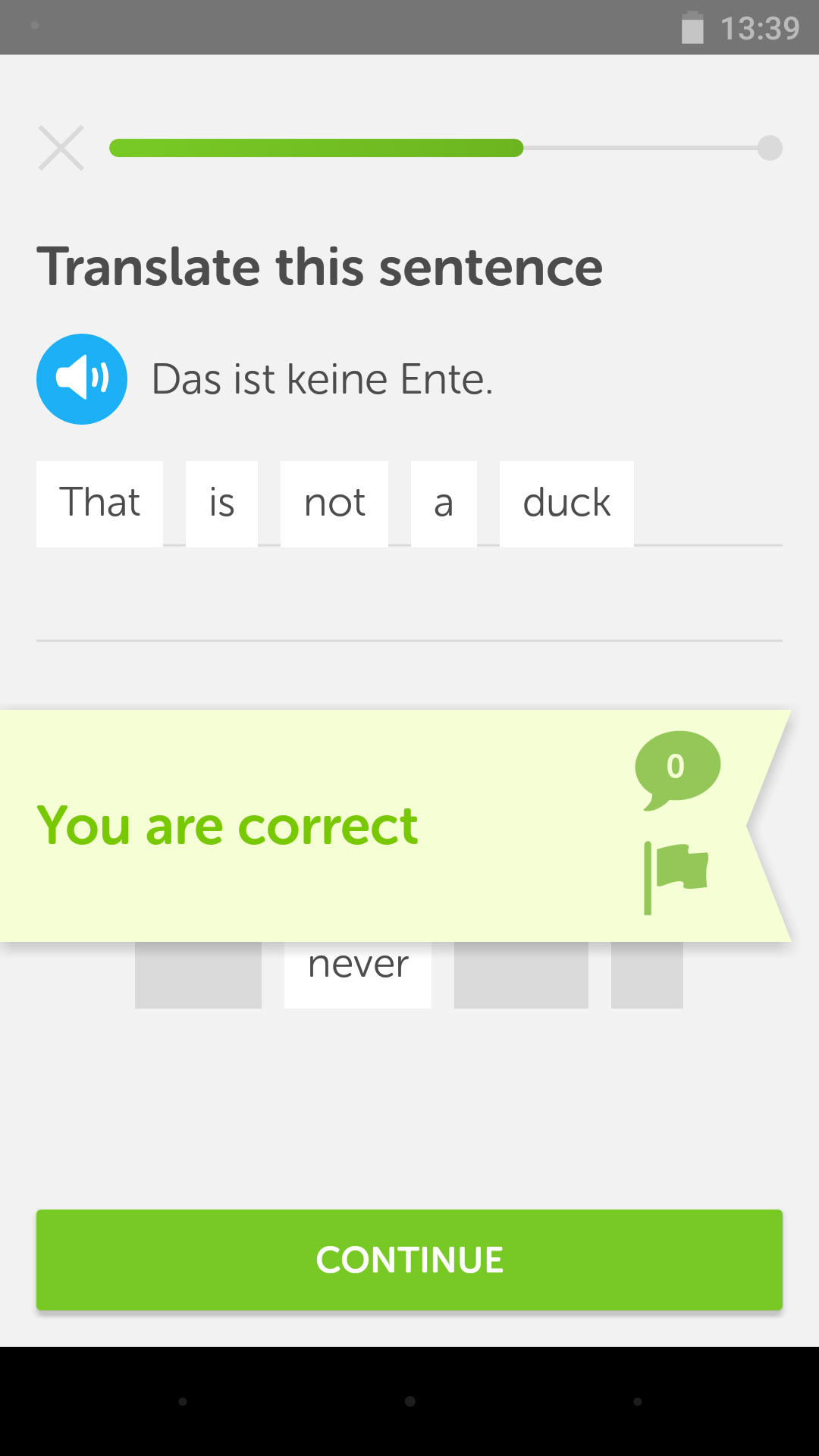 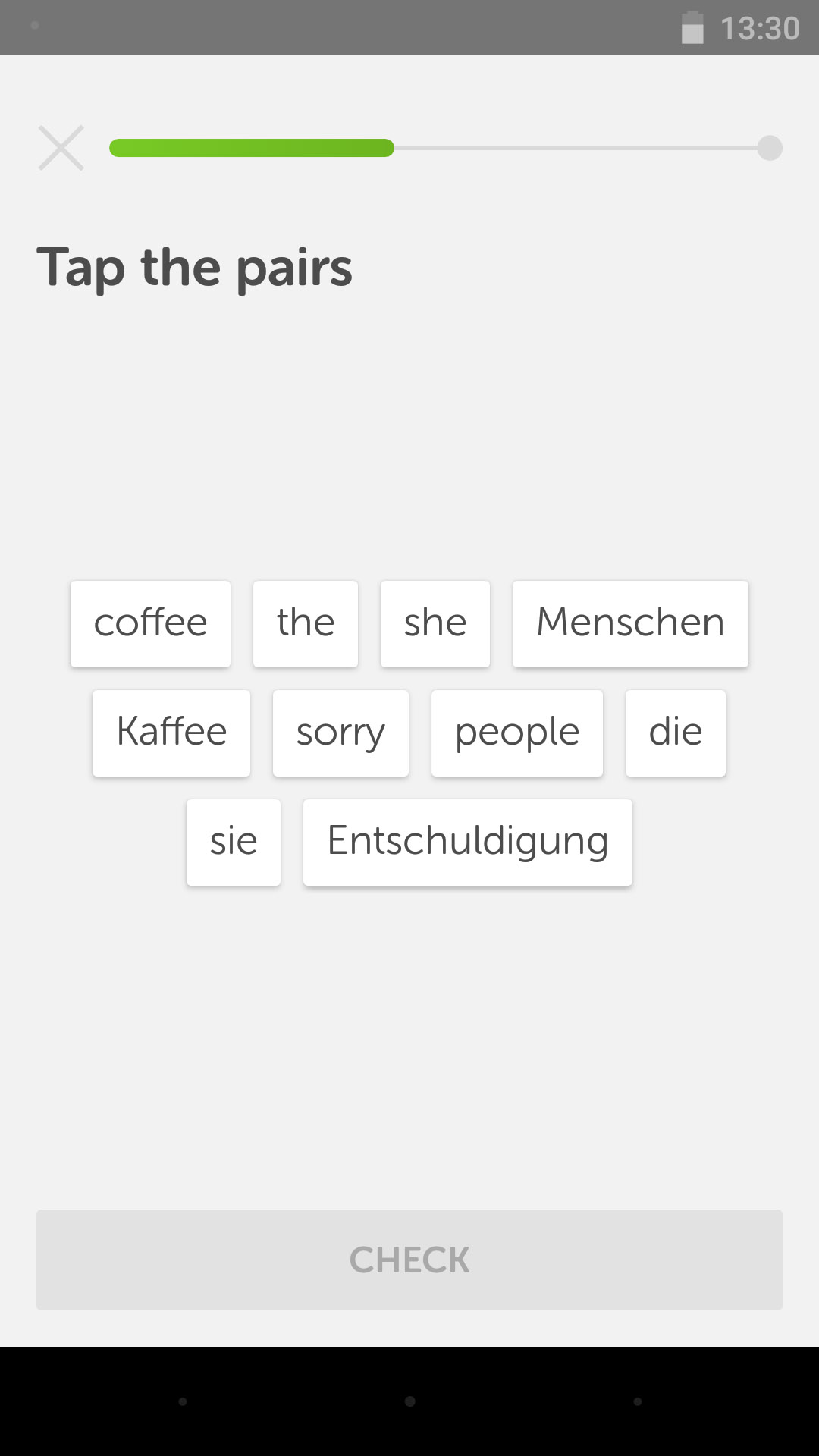 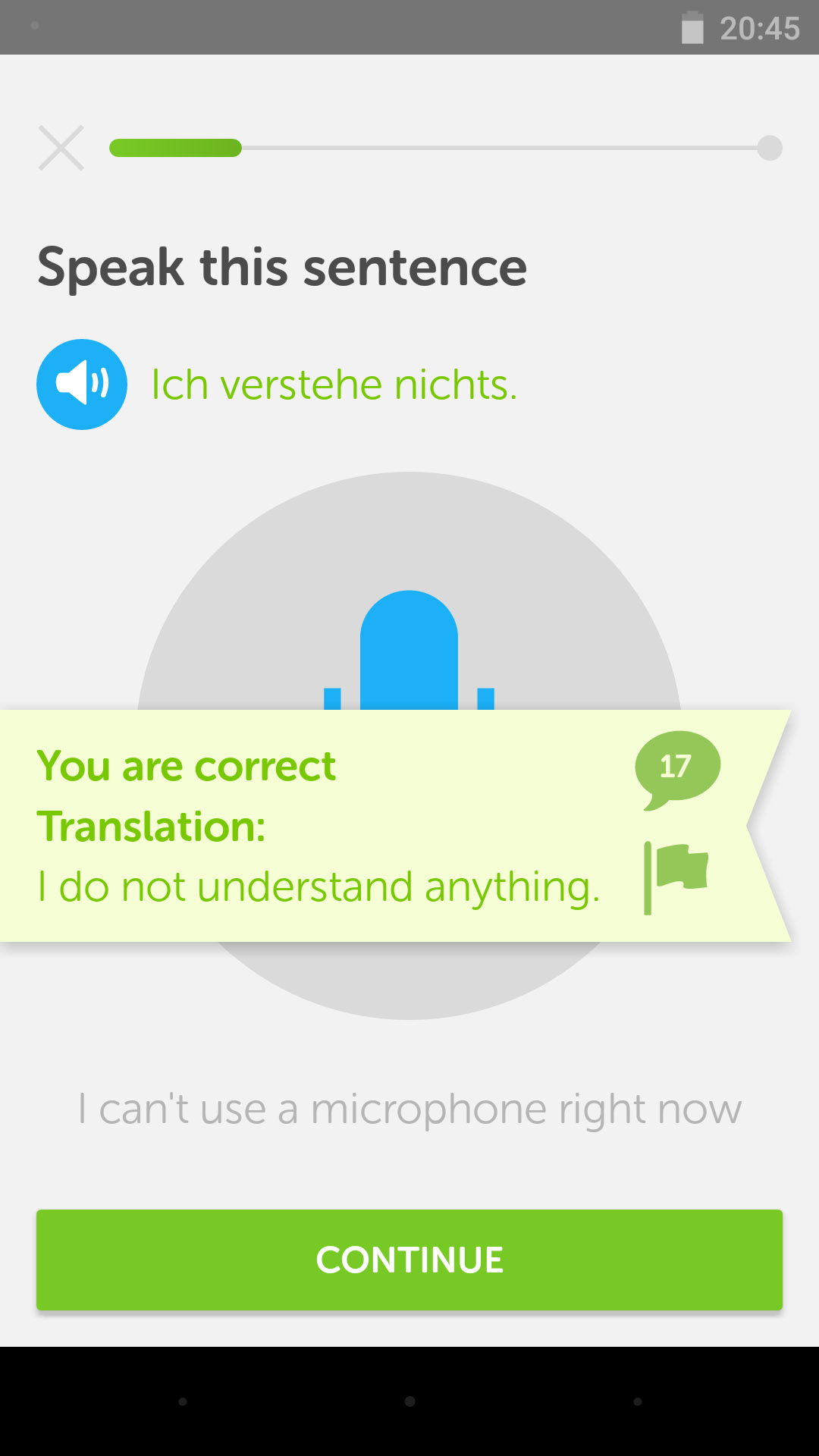 [Note: This is something I’ve used personally for some time, believe strongly in, and wanted to share with you, as there’s a chance it might prove useful. Adventurist Life does not run “advertorial” content.]

Duolingo is a free app and more effective than Rosetta Stone (so you know it’s good). It’s simple and intuitive. You can tell a lot of thought went into the design and development of the user experience. Simply put, it makes learning a new language easier than you ever thought it could be.

The app works by presenting a variety of different questions to you. I’ve included a bunch of screen shots from my phone to give you an idea what you might expect.

Some questions are easier than others, for example, matching pairs. Simply tap the word and its English counterpart. Other questions can be trickier, such as when the app plays someone saying a phrase and having to translate it into English (or vice versa).

I’ve found the daily reminders particularly useful. The app tracks your progress as you go, but it’s nice, on the weekends especially, to get a notification on my phone to not break your current streak. I’ve gone as much as a full month without missing a day. Other times, I’ve been off-grid or sick and didn’t train. 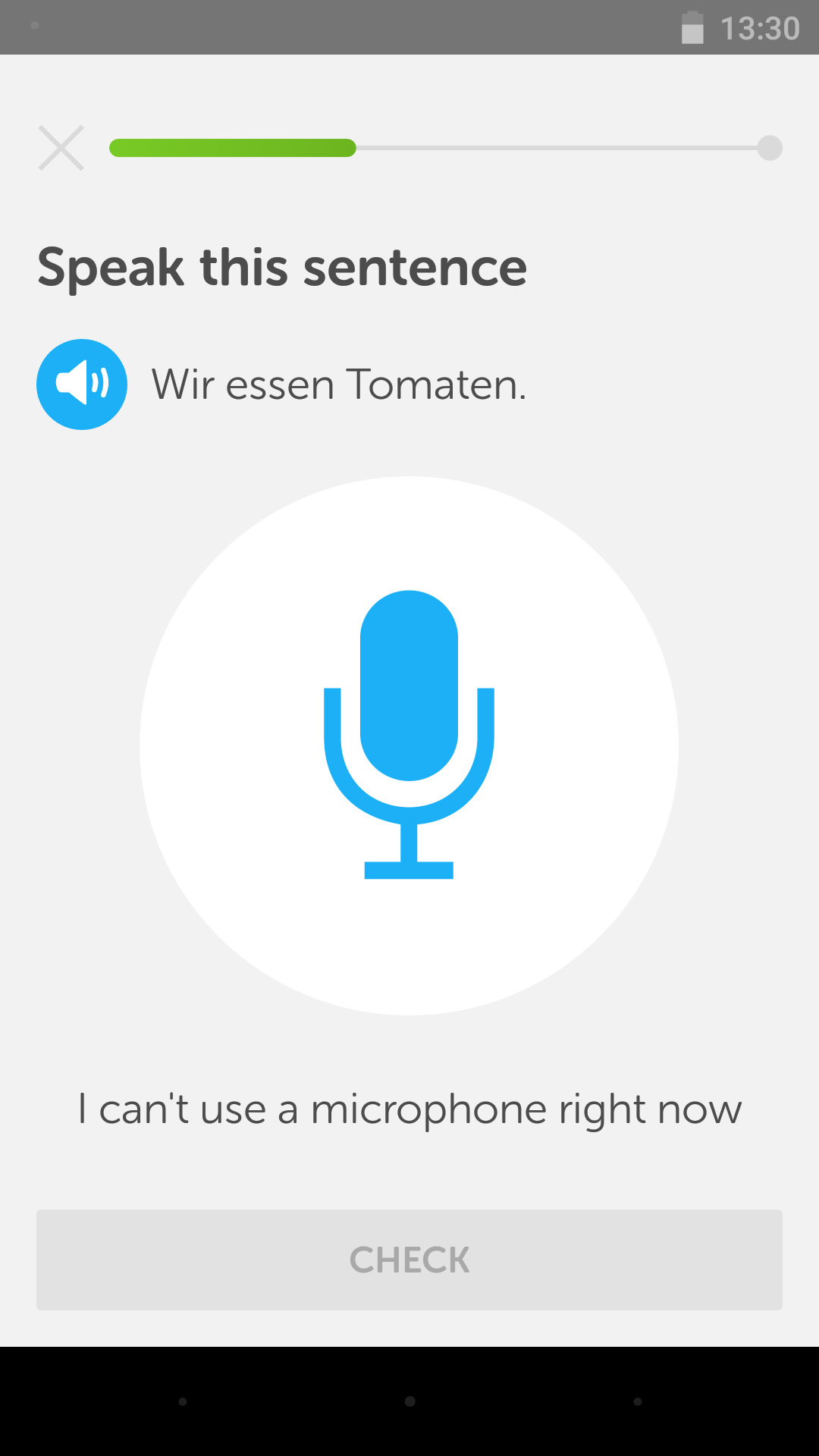 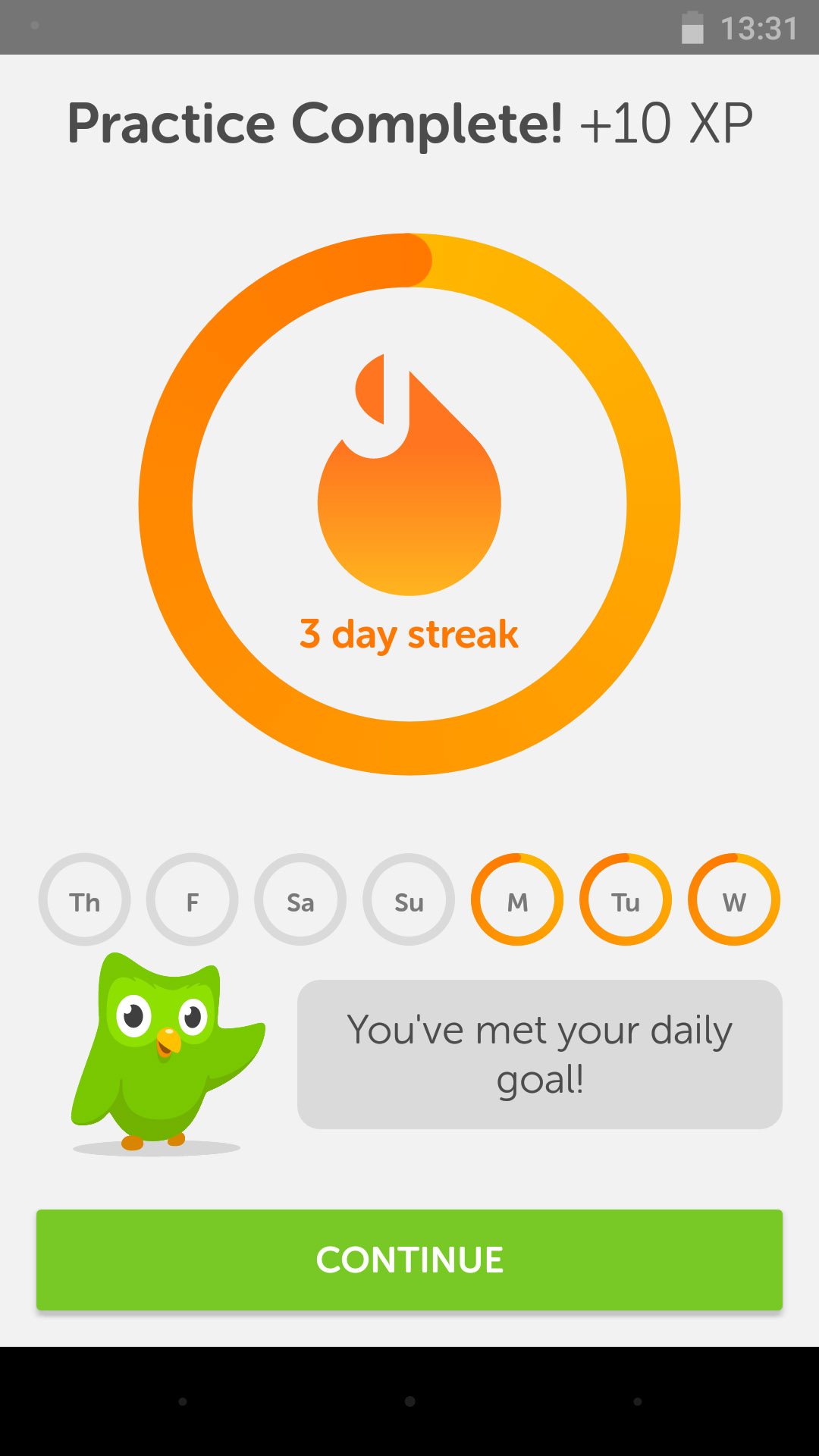 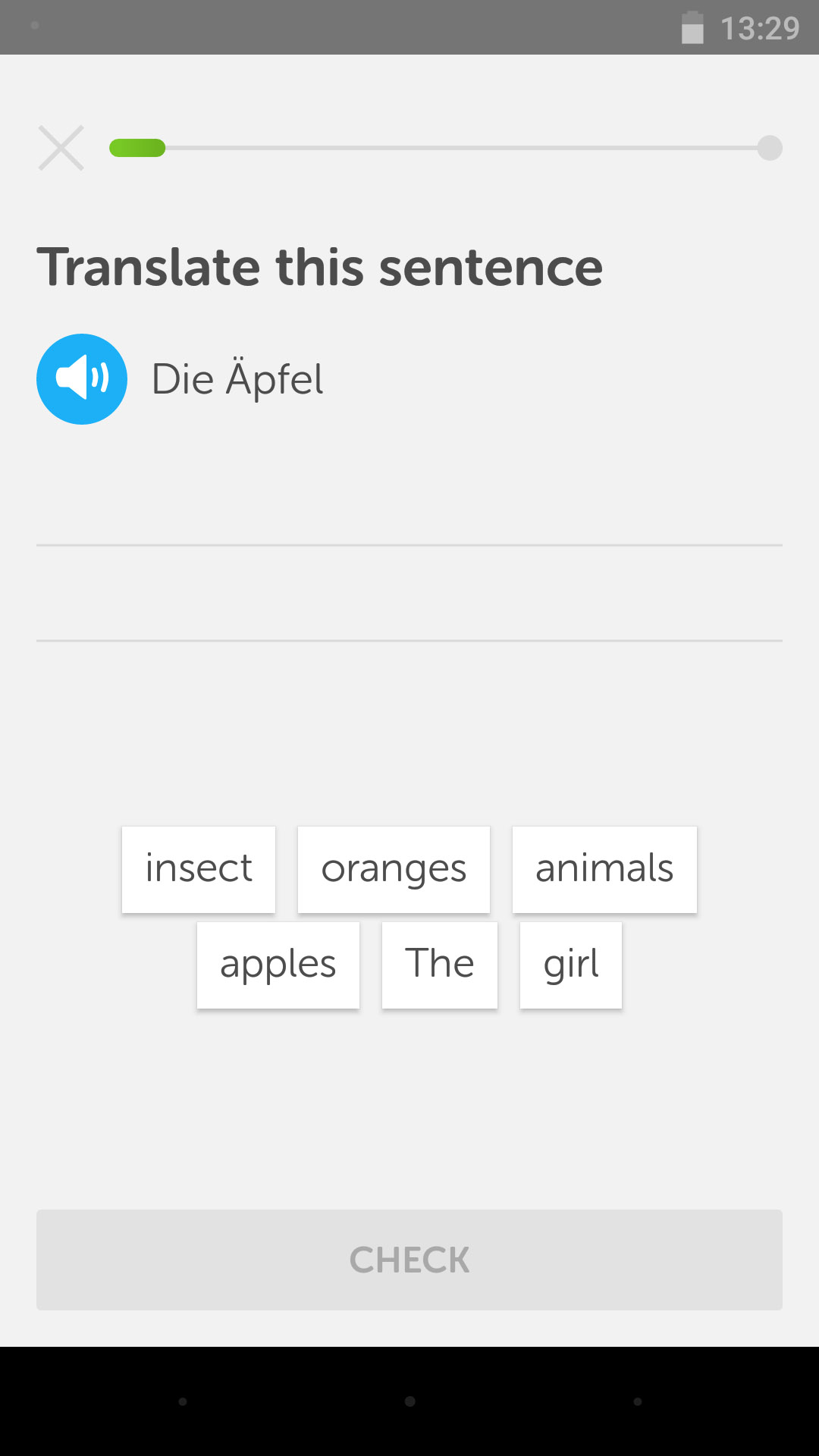 What languages can you learn with Duolingo? Good question. Here’s the list as of June 2016

And they’re currently working on adding the following to the catalog:

Here’s the most popular languages being learned with Duolingo worldwide. (Image: Duolingo) 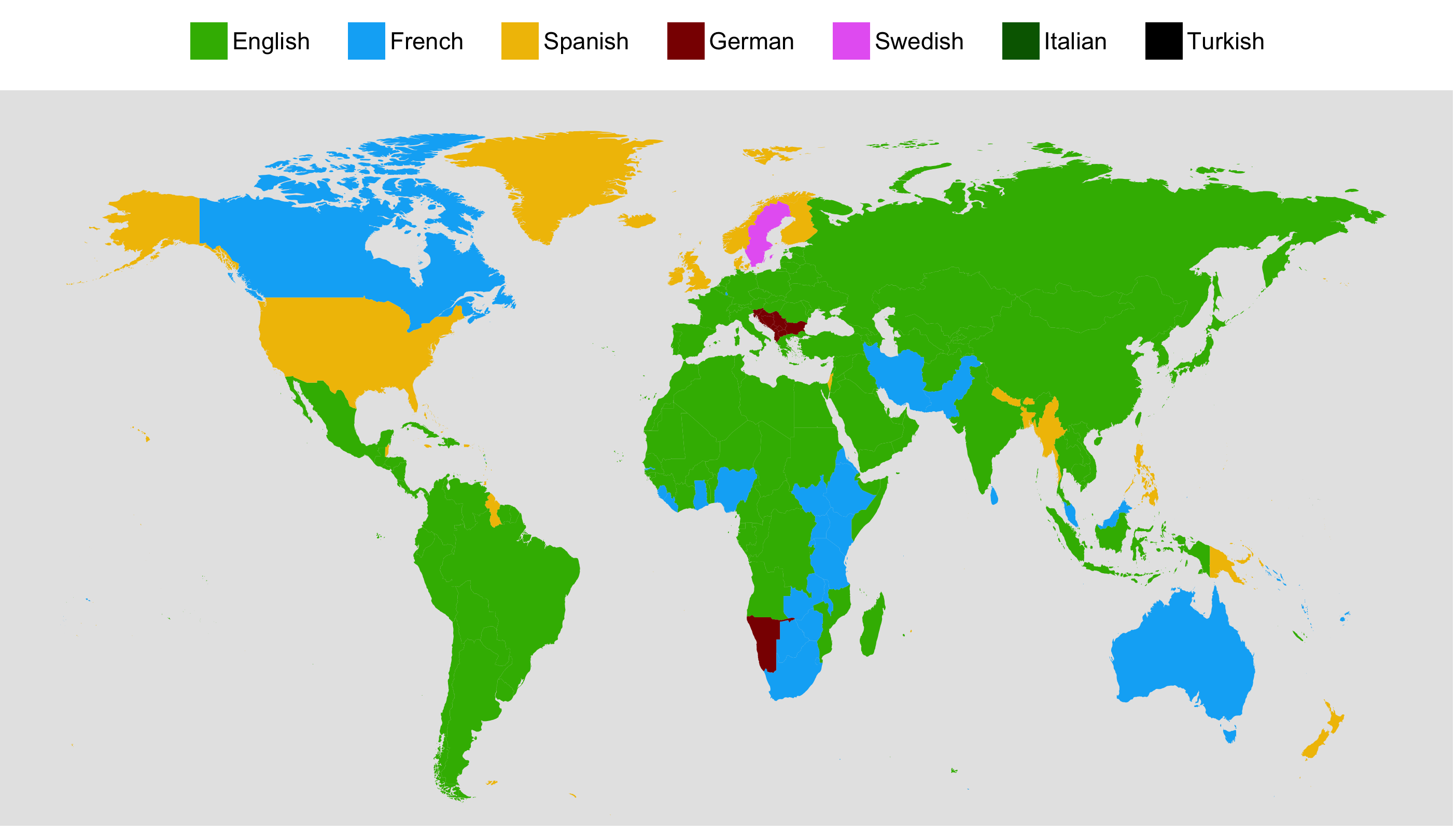 Got a smart phone & 5 minutes?

We spend so much time these days navigating a digital landscape designed to distract and divide us. Duolingo gives us a simple, free way to use modern technology to make a remarkable difference in our lives through focus and connection with others around the world. You might not be going to another country anytime soon—if ever—but think of the doors opened to you when you can read about some far away place in the native tongue.

You never know when you might run into someone from said country visiting where you are. Believe it or not, I ran into two separate German couples while in Kauai. While my Deutsch was still pretty bad, I could tell I brightened their days by sharing what I’d learned about the area (and how to light a gas BBQ grill).

You’ve got a truly easy way to learn another language in the palm of your hand. It’s simple. It’s fun. Put your phone to work for you. Wir sprechen Deutsch, und Sie?