We listened as a wolf howled, seemingly right outside our shelter the first night. Yes, there are wolves on Isle Royale, and as the days wore on we would see their scat on the trail during the day, and hear them at night. Funny how their song wasn’t scary or creepy as you might imagine it to be. Just the same, their soulful music reminded us of the struggle for life that all creatures face here on the island, ruling out any midnight bathroom breaks for the girls. 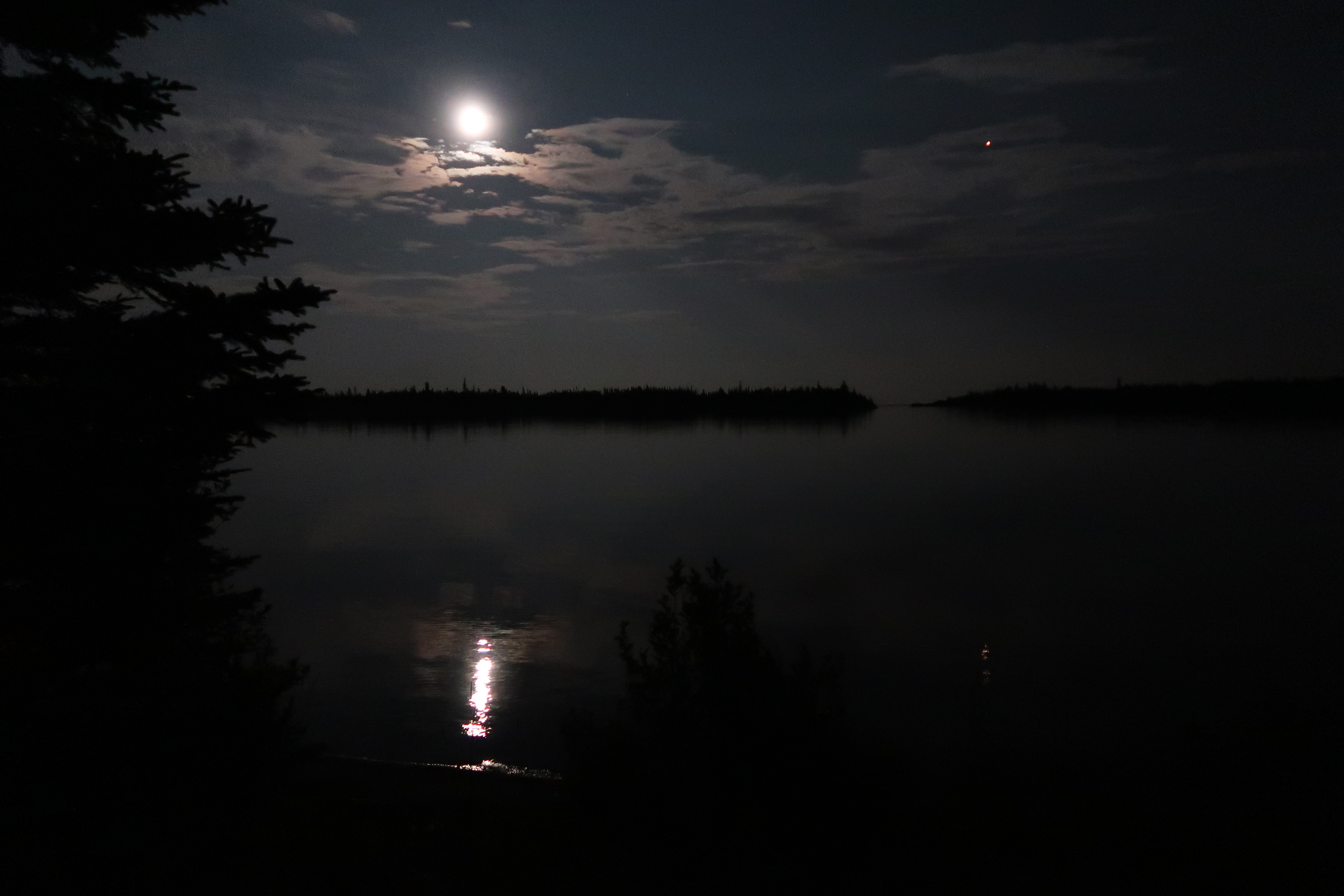 Soon the dawn came and with fresh socks, full bellies and empty bladders it was time to leave our shelter and Three Mile behind. These shelters are a happy sight for weary hikers on the island, providing a respite from bugs and inclement weather. Before moving on, we took some extra time to sweep it out and leave it better than we found it. 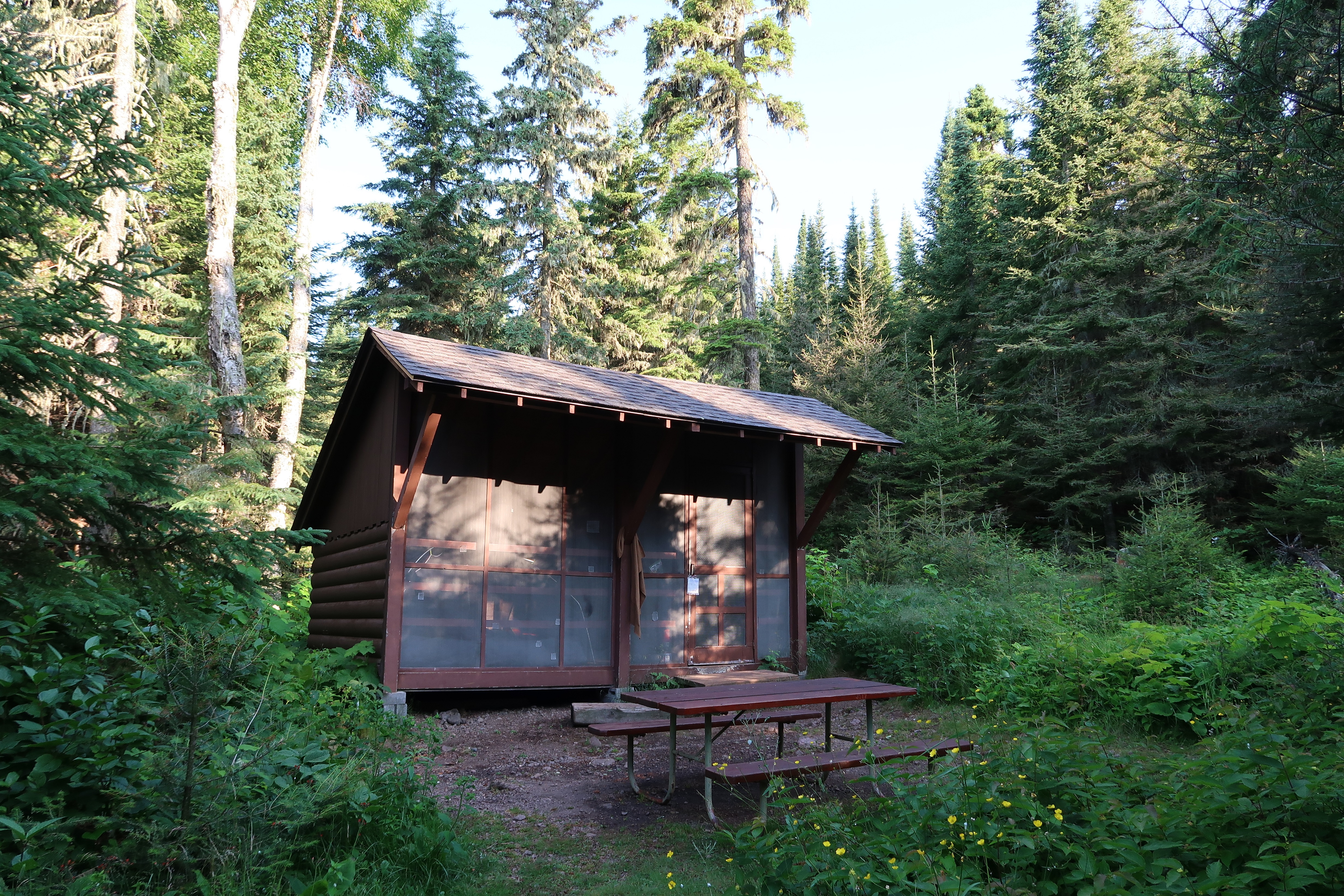 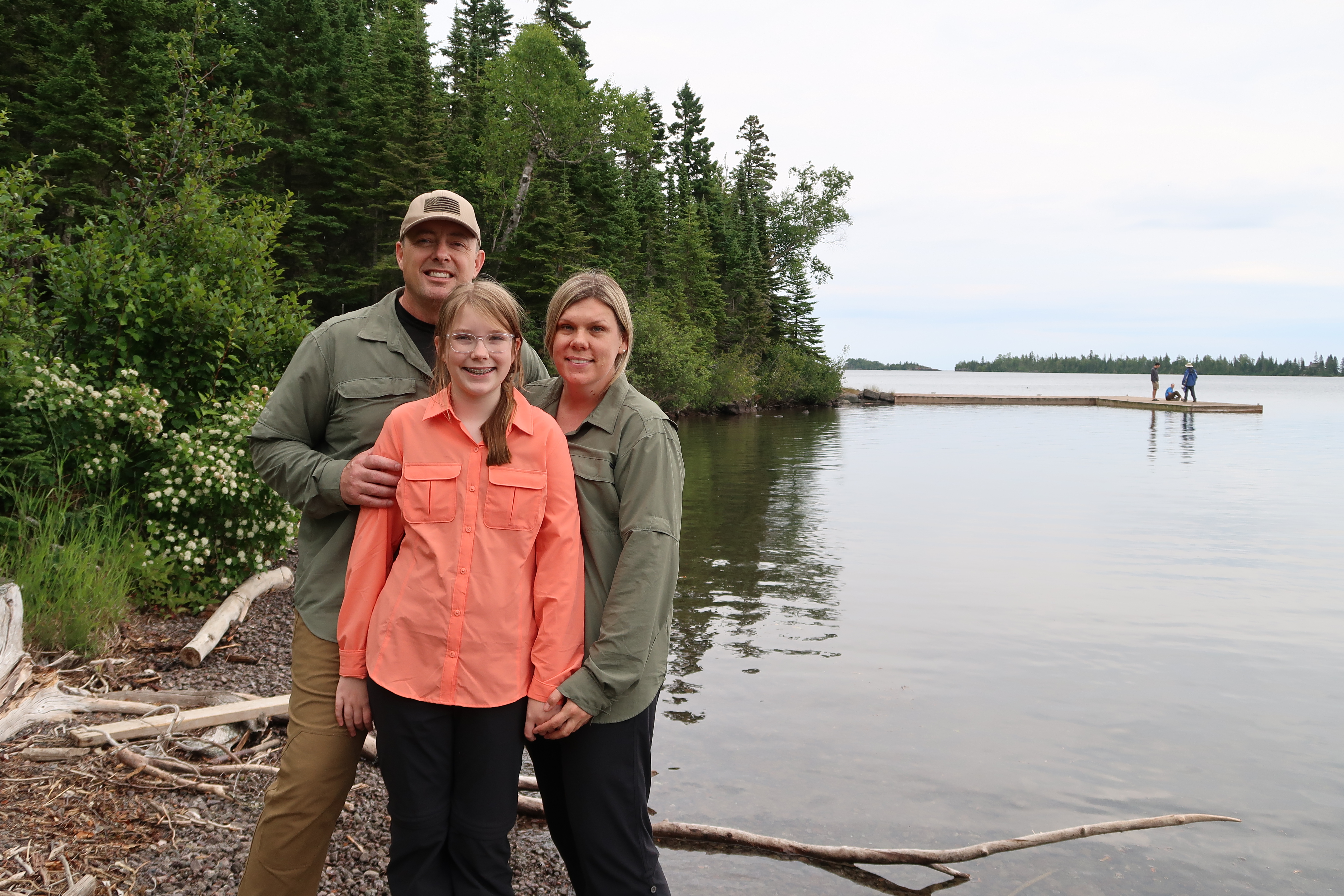 Once we topped off our water bottles at the dock we were on our way again with all our worldly possessions on our backs, this time hiking along the shore through forests, swamps, and rocky outcrops towards the aptly named Daisy Farm and our next night’s campsite. 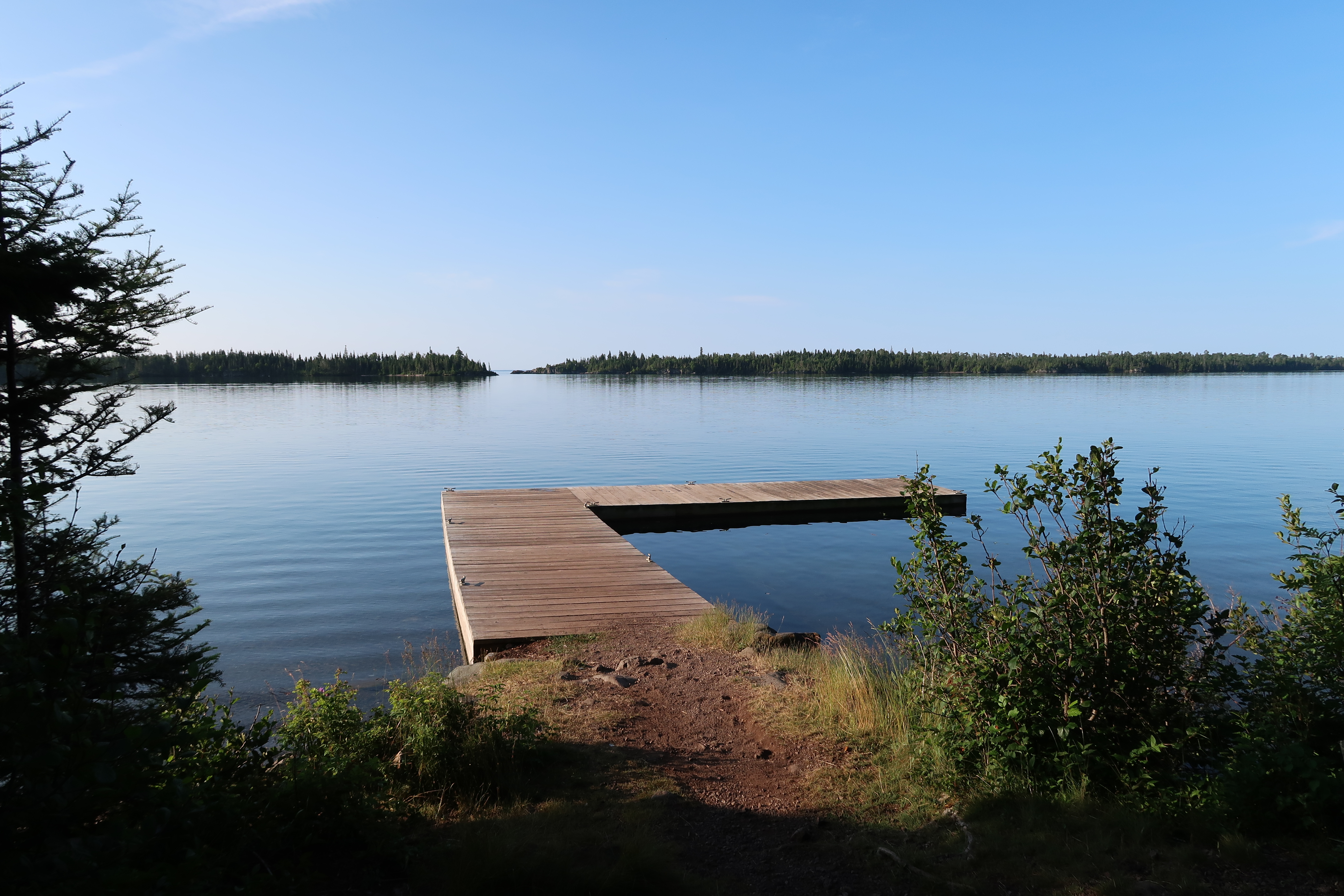 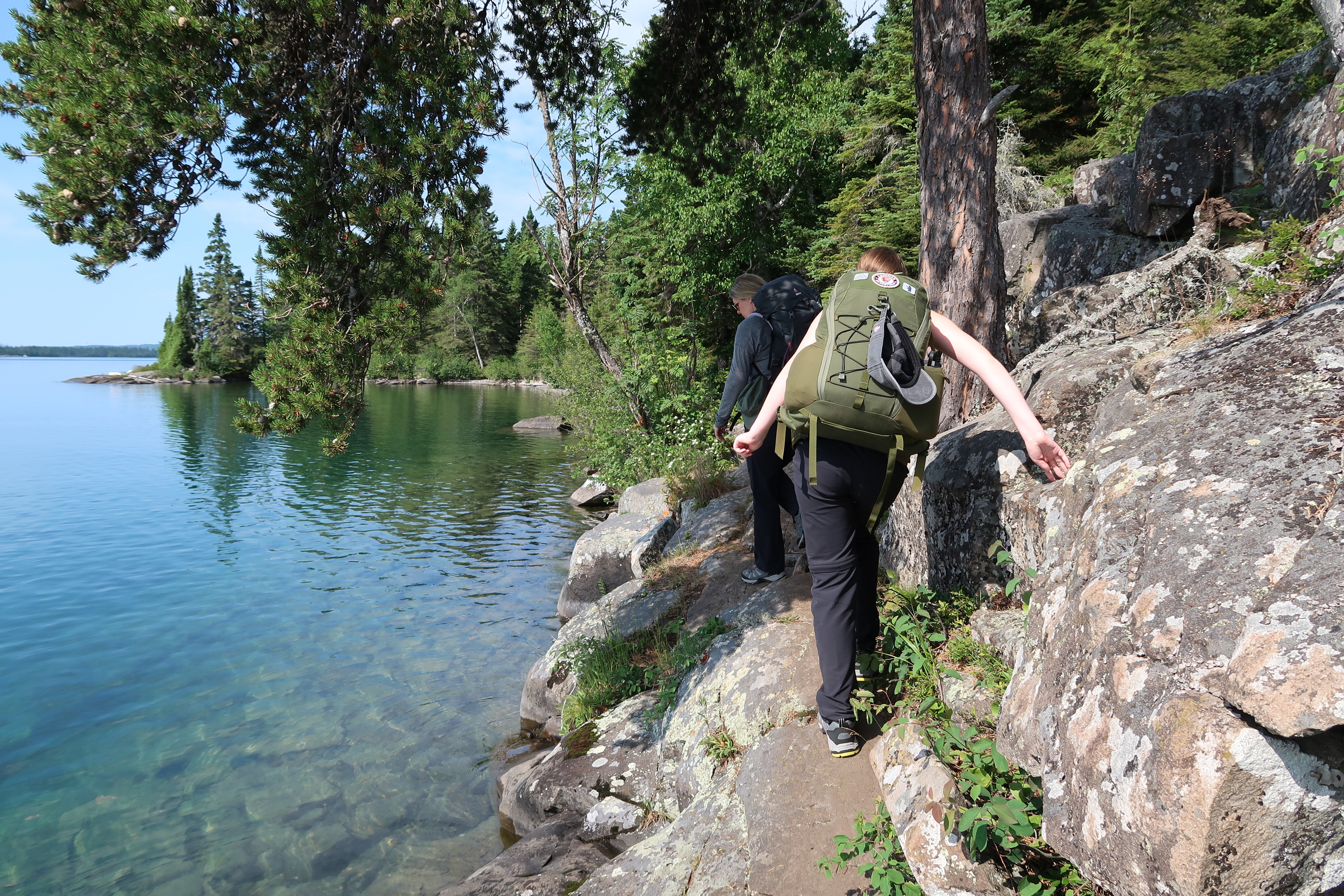 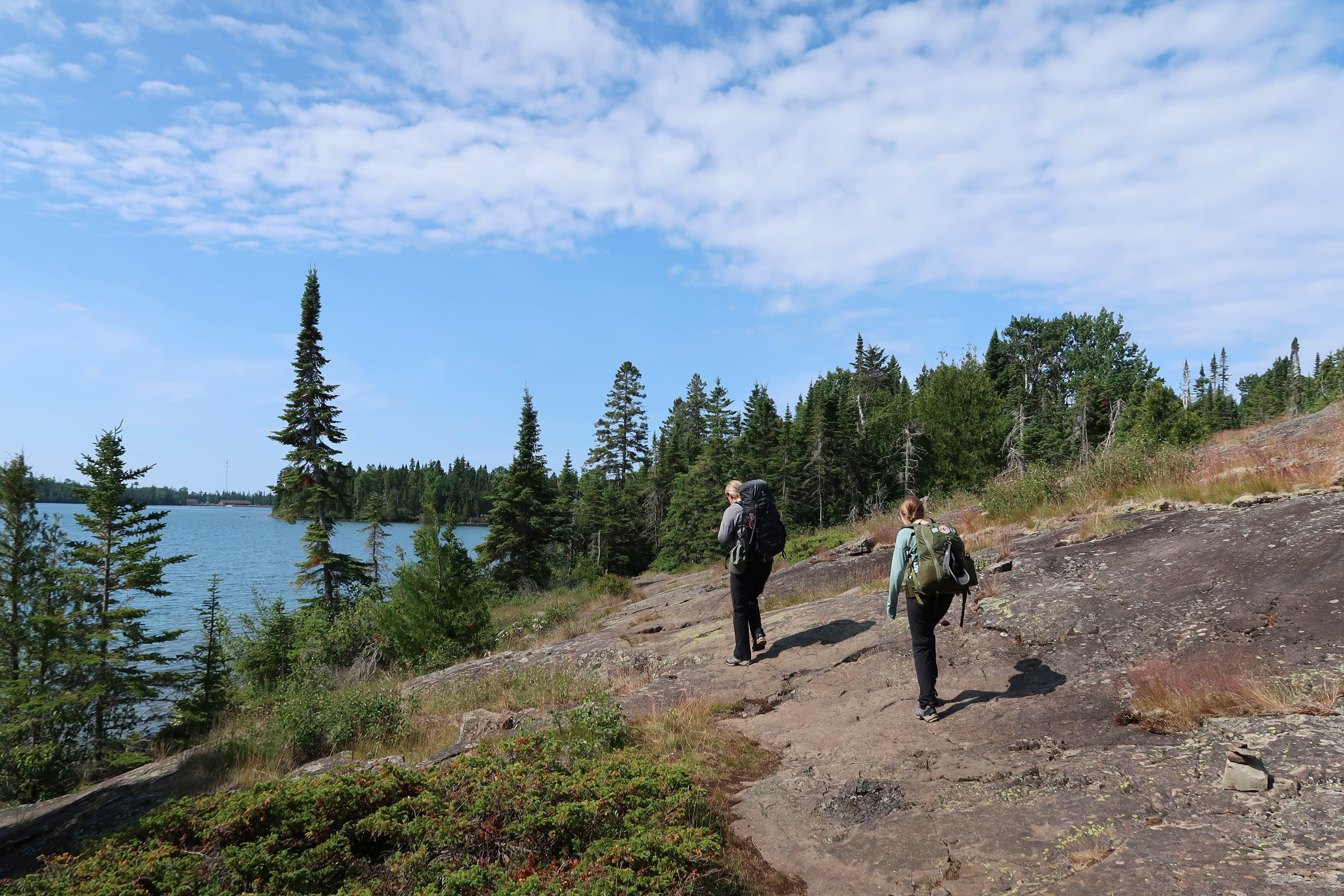 We saw all manner of wildlife while we were on the island. Moose, frogs, ducks, snakes, huge rabbits, chipmunks and a variety of birds. Mosquitos and bugs in general were nowhere near as bad as we had heard they would be, and we were thankful for that especially crossing the swampy areas. 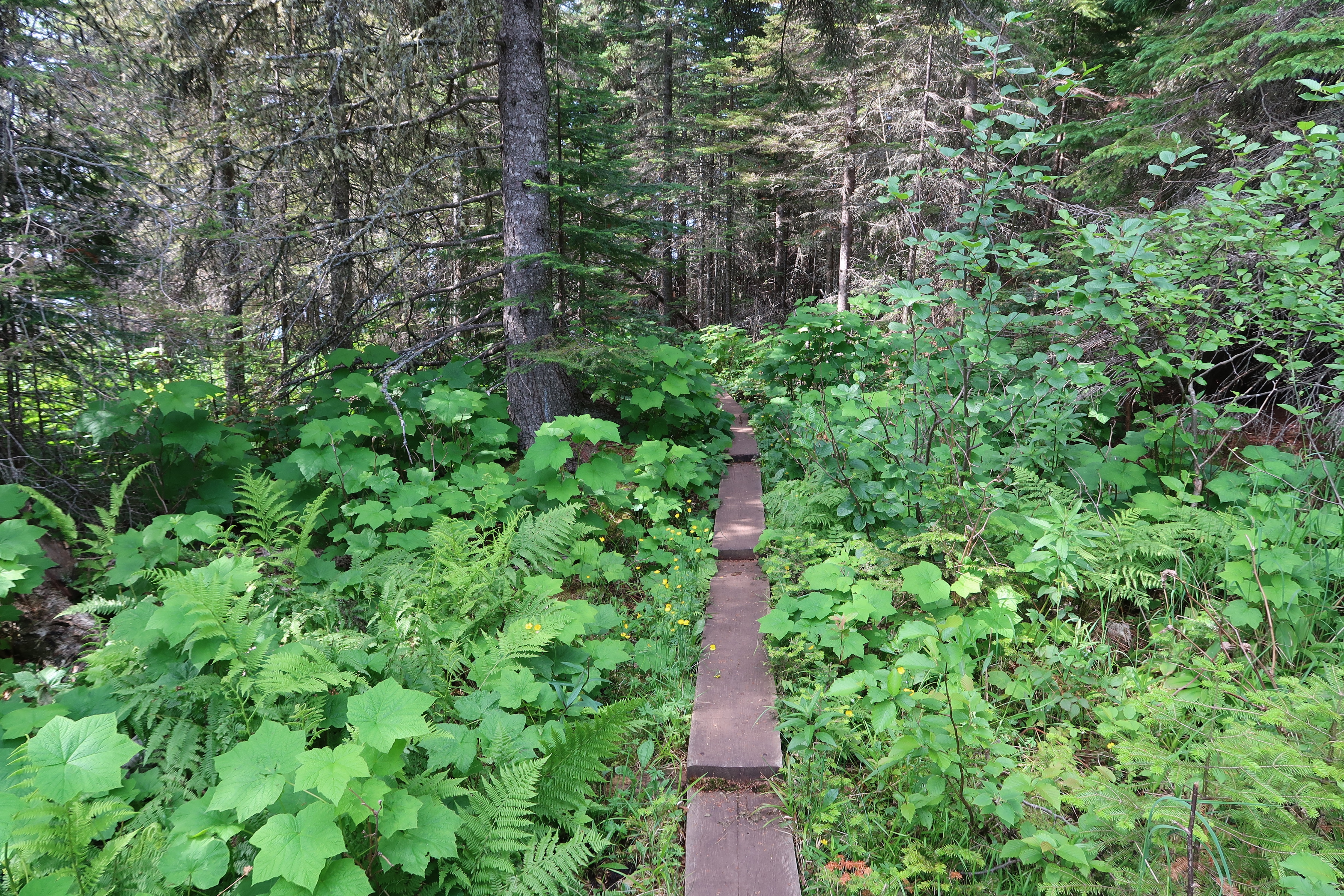 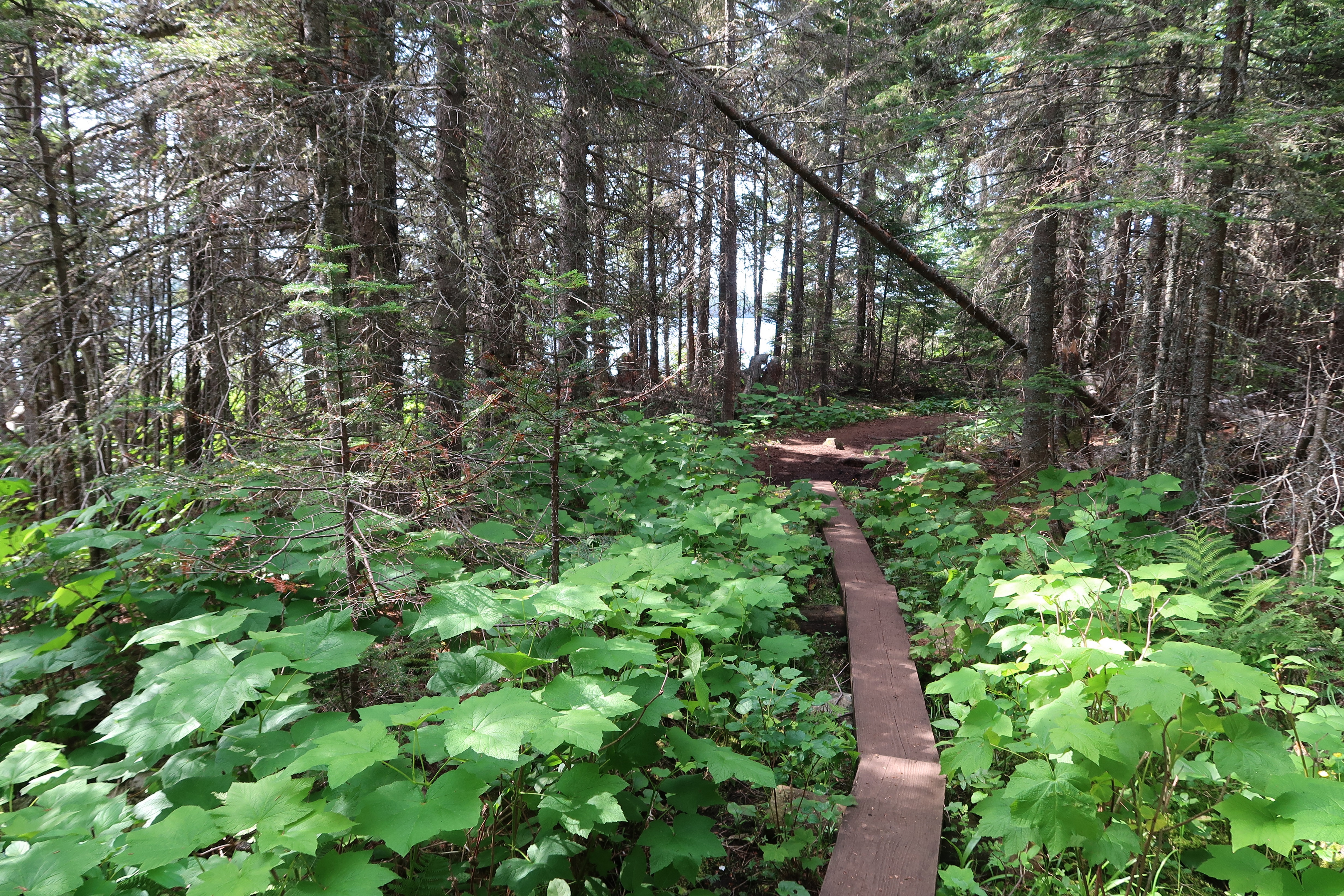 Isle Royale has a human history dating back thousands of years. The island was a common hunting ground for native peoples from nearby Minnesota and Ontario with a canoe voyage of thirteen miles just to reach the island’s west end from the mainland. In prehistoric times, large quantities of copper were mined on Isle Royale and the nearby Keweenaw Peninsula. The region is scarred by ancient mine pits and trenches up to 20 feet deep, with further exploration and mining occurring on the island until the last mining company closed in the early 1890’s. We found several old mining ruins along the way. 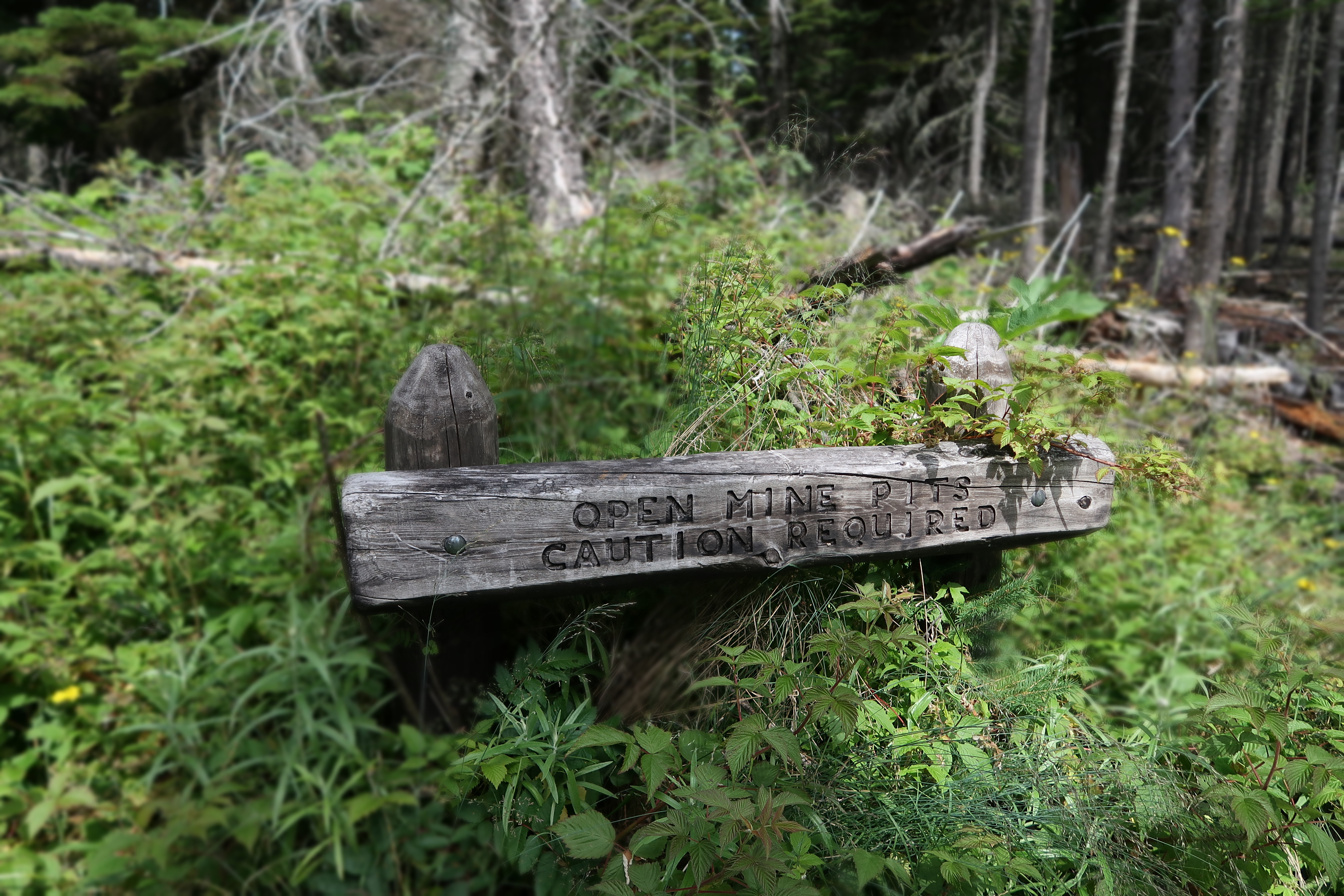 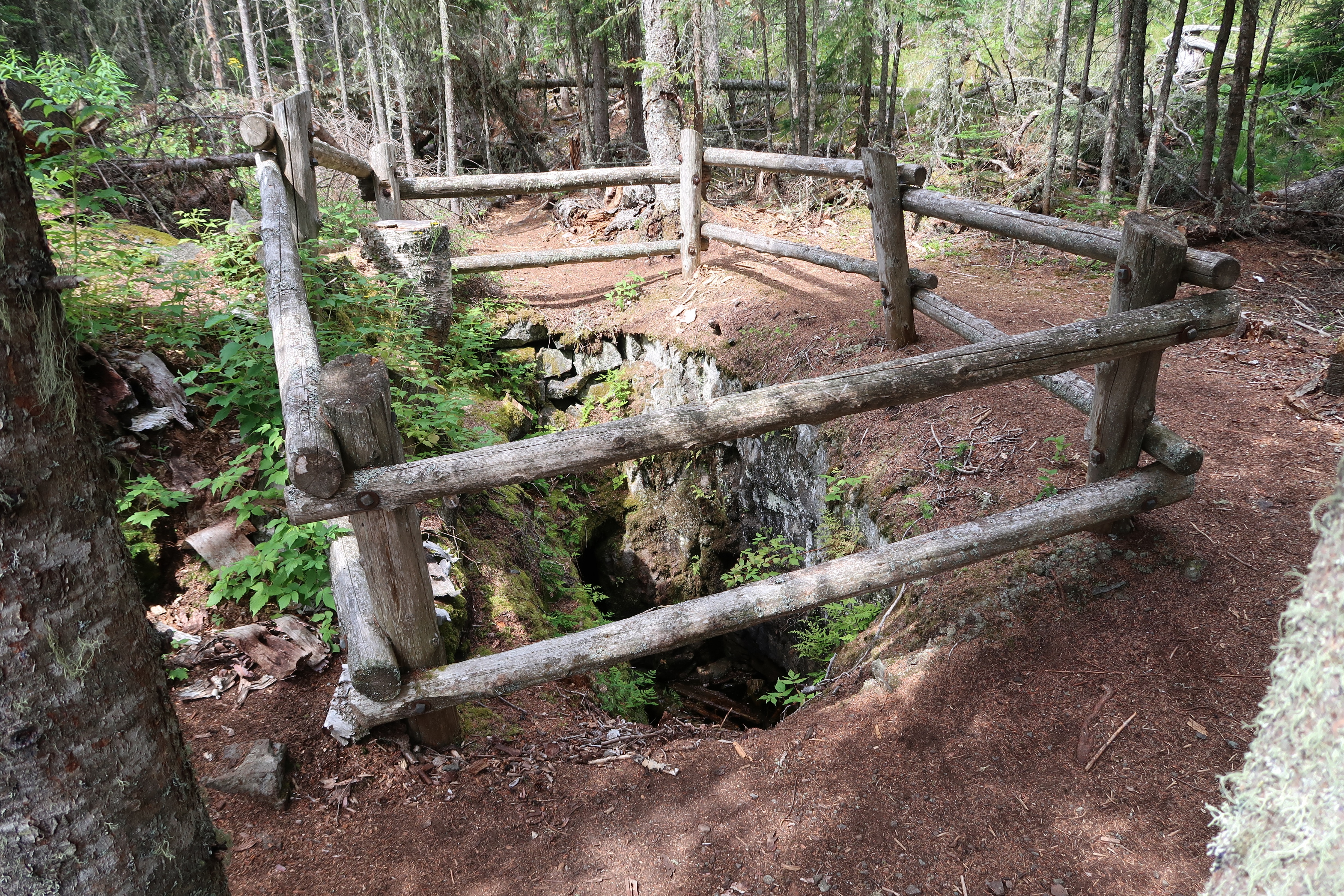 A Note For Families: Taking frequent breaks while hiking makes for better memories. Take time to hydrate, eat snacks and rest while on the trail, especially with children. When the smiles are gone and it gets unusually quiet, it’s probably break time. Take time to soak in all the sights and sounds around you! 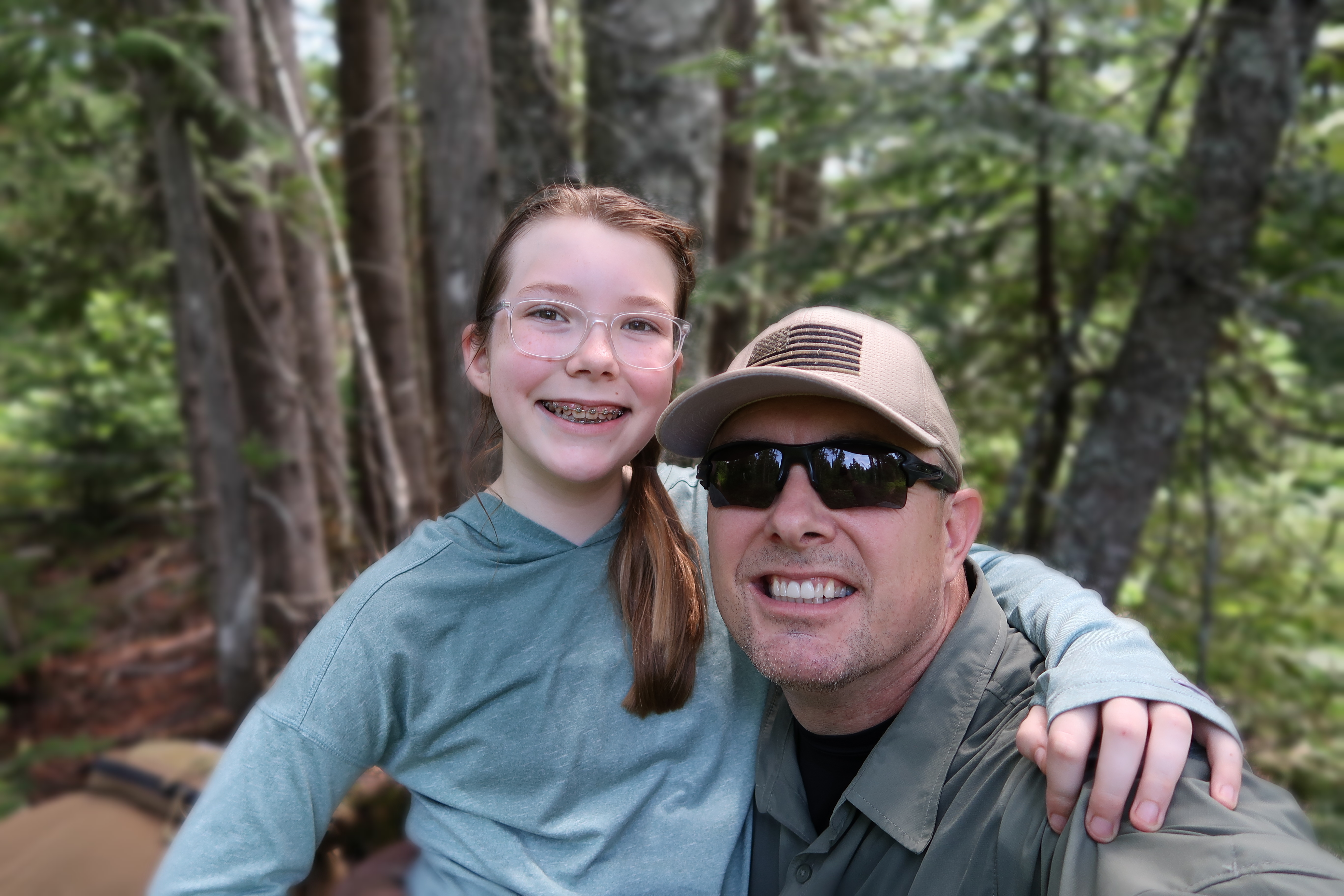 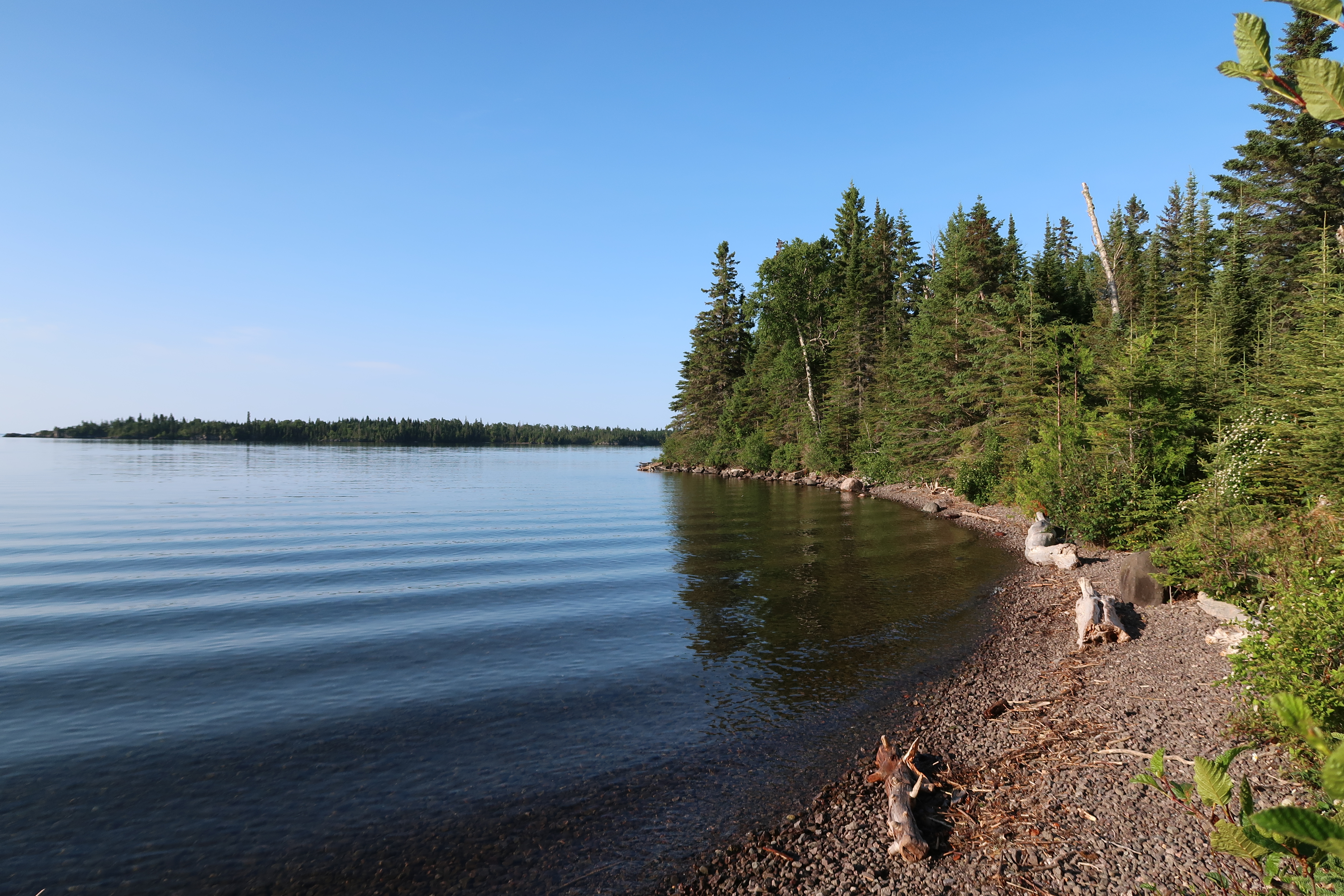 Continuing on, we were met with more plank roads through sensitive areas, more sun beaten rocky areas and more shady forest paths. The vibe on Isle Royale is one of quiet loneliness, we saw very few people hiking in either direction and the occasional bird song or fish jumping was the only sound as we worked our way towards Daisy Farm. Nothing here but you, your family, and the sights and smells of the forest.

It’s amazing how your thoughts and priorities become crystal clear while hiking. 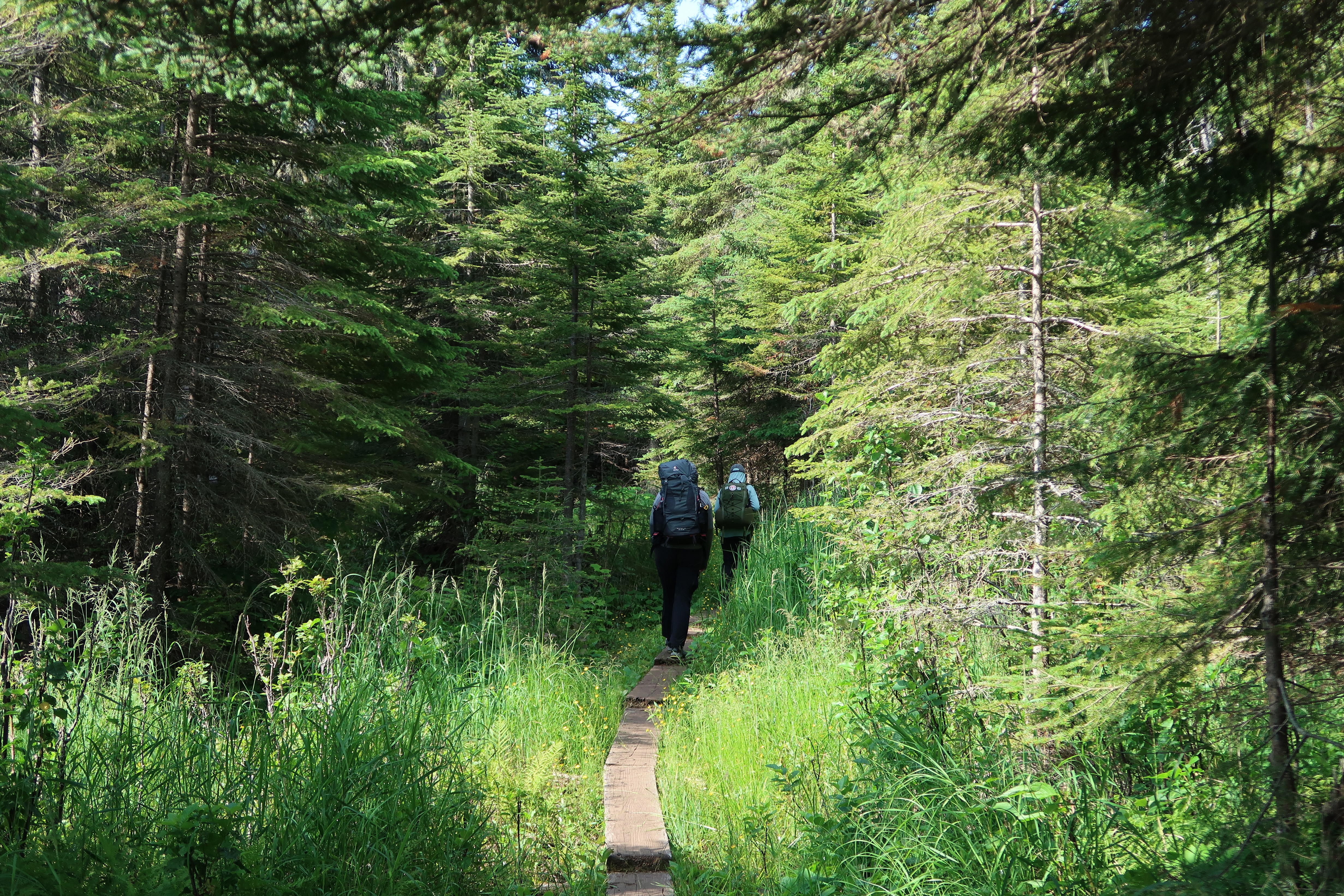 Arriving at Daisy Farm in the afternoon, the spell of the forest was broken as we ran into people and quickly realized this was a bigger campground than Three Mile, a busy “hiker hub” where many trails connected. 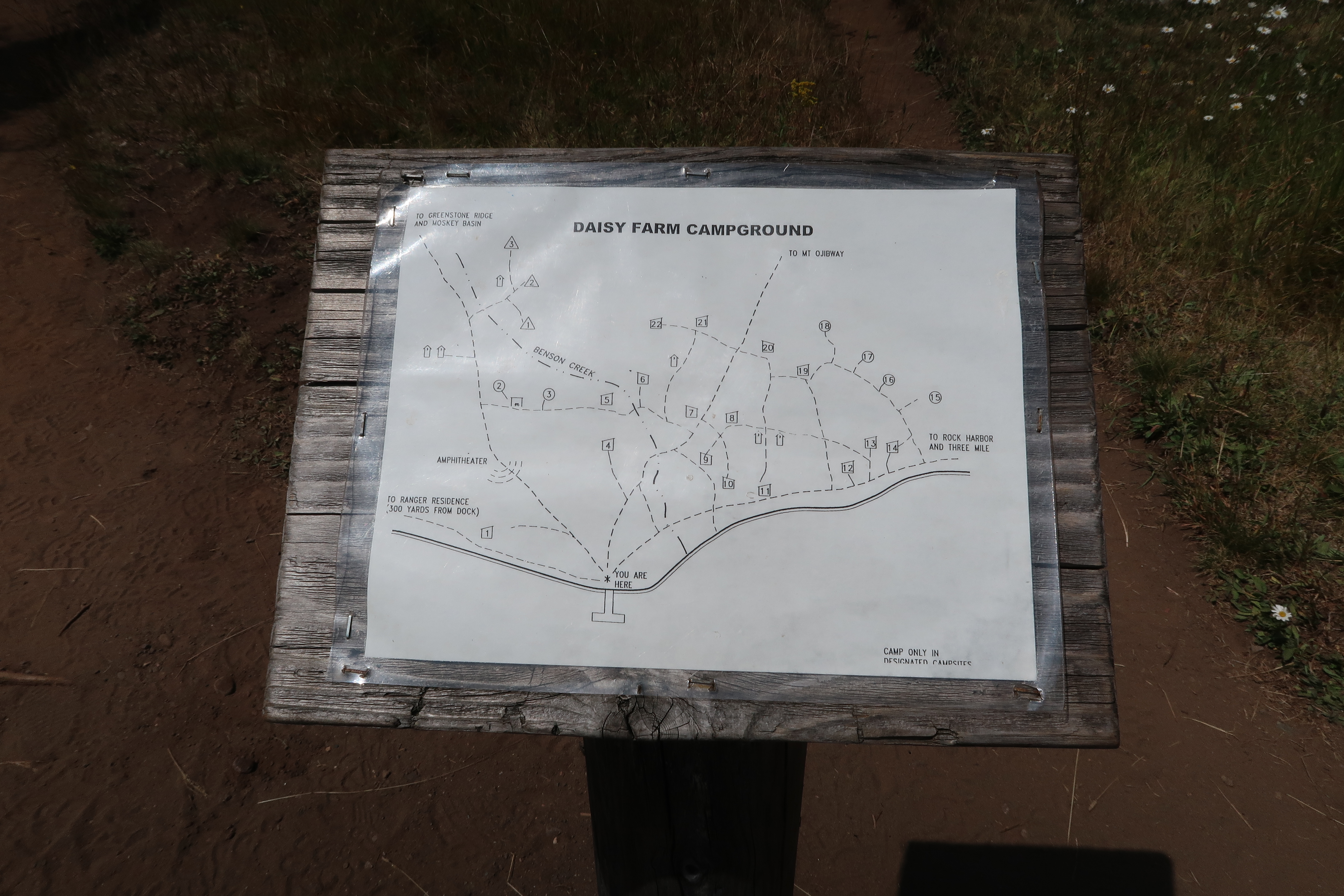 The land rush was on to find a suitable campsite and once we had settled into an empty shelter, it was time for some much needed rest and leisure time. We were lucky enough to score a site with a nice view of the lake, and after a quick dip in the lake (we swam every day we were here) it was time for grub.

I’ve had my trusty Jetboil since 2006 and it still works like the day I bought it. We brought a variety of different brands of hiking meals along on this trip and they all have their pros and cons. I’d recommend trying a few at home before you get out there and realize that it’s not your thing. I walked away from this trip a big fan of Backpackers Pantry and Mountain House. 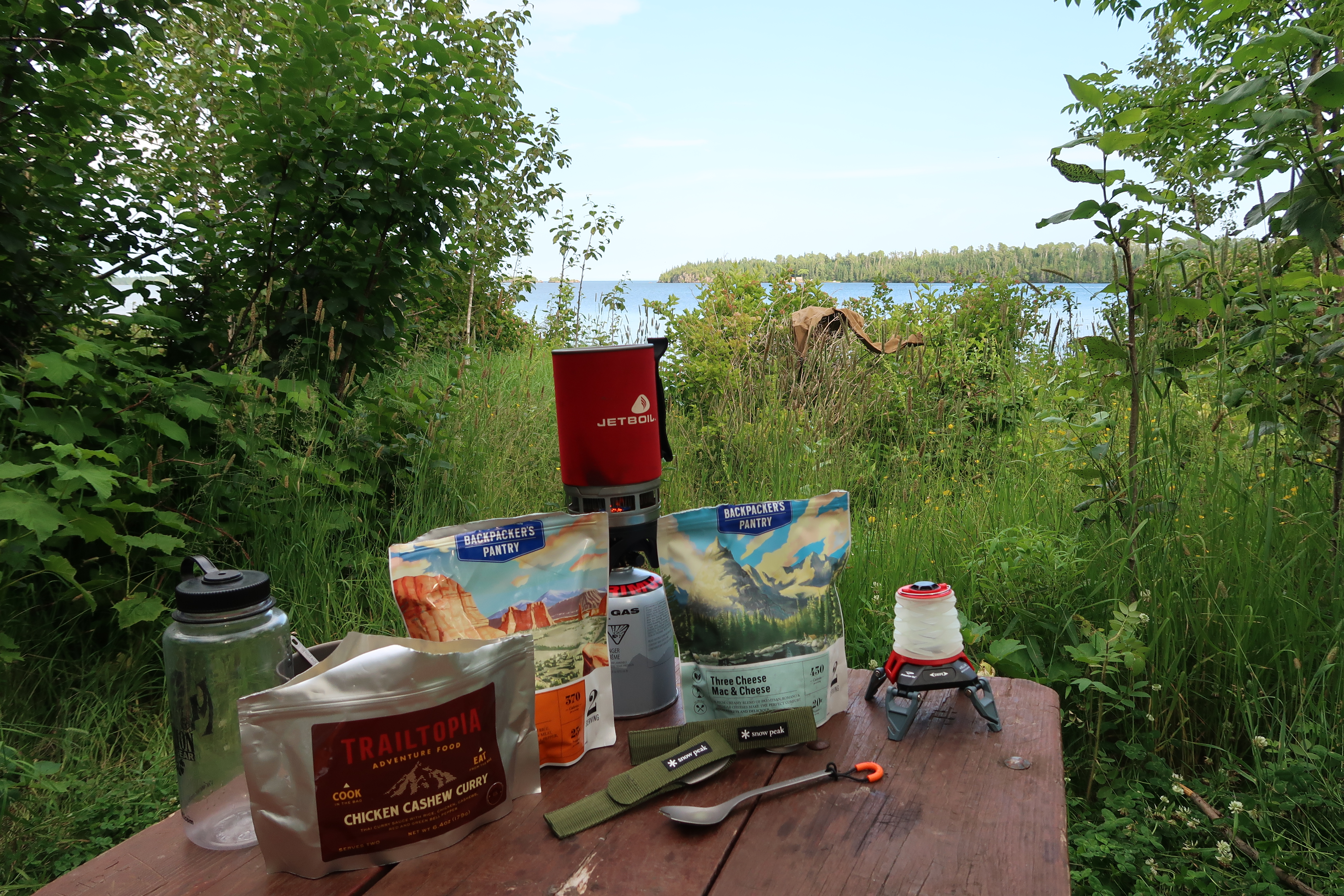 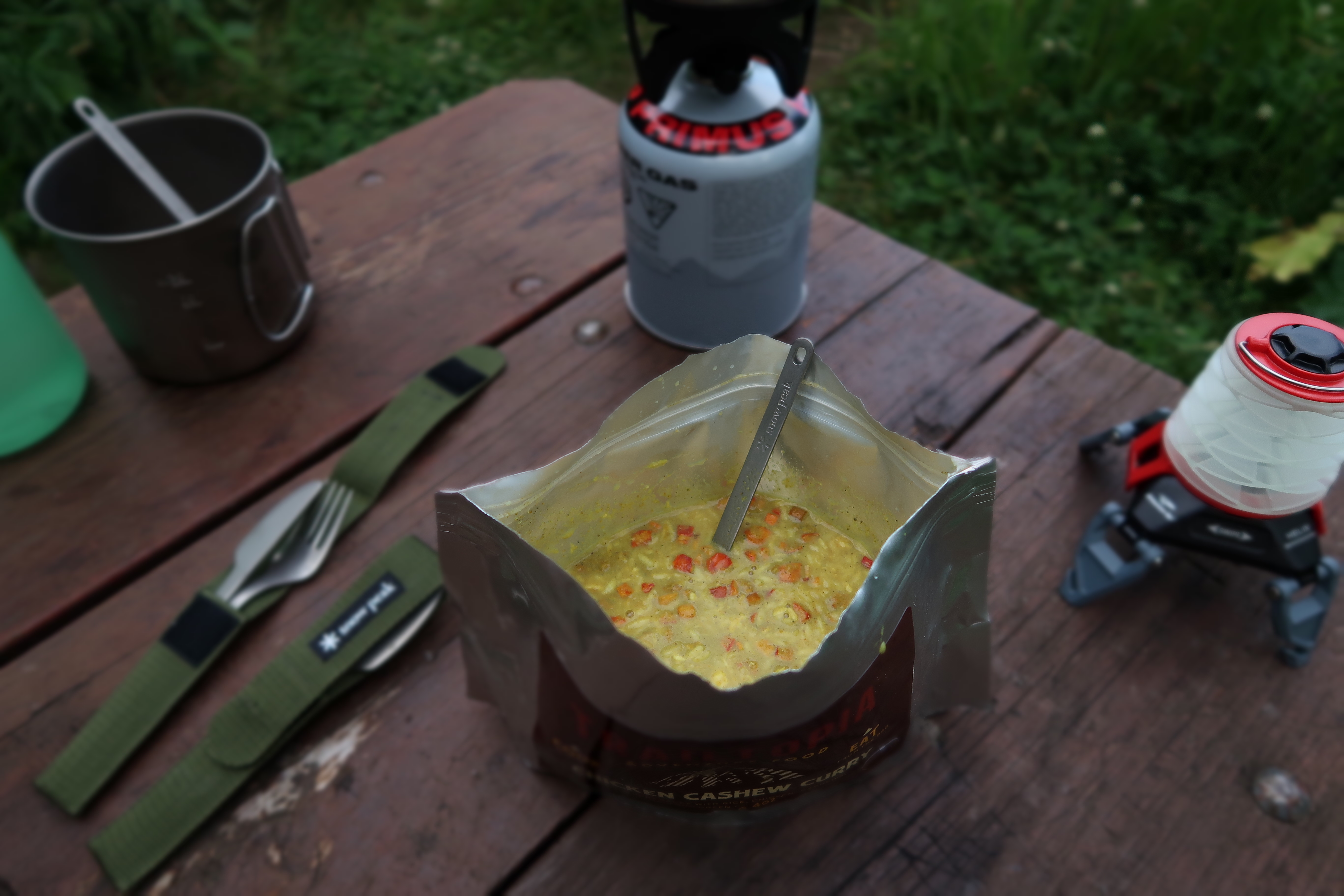 The Daisy Farm site was one of the very first camps for the Civilian Conservation Corps on the island in the 1930’s. From the Michigan DNR:

“Most Michigan CCC camps were in either national or state forests. The state’s only National Park Service camps were on Isle Royale, which had been designated a national park in 1931. On 13 August 1935, an advance party of twenty men from Company 2699, led by Captain Edward S. Thomas, arrived off the island in Siskiwit Bay. Forced to wade ashore, the men cleared a living area for the remainder of the company, which arrived later that month. The 2699th completed Camp Siskiwit and performed general forestry work before returning to the mainland in October. The following spring the company returned to Isle Royale and constructed Camp Rock Harbor at present-day Daisy Farm Landing.” 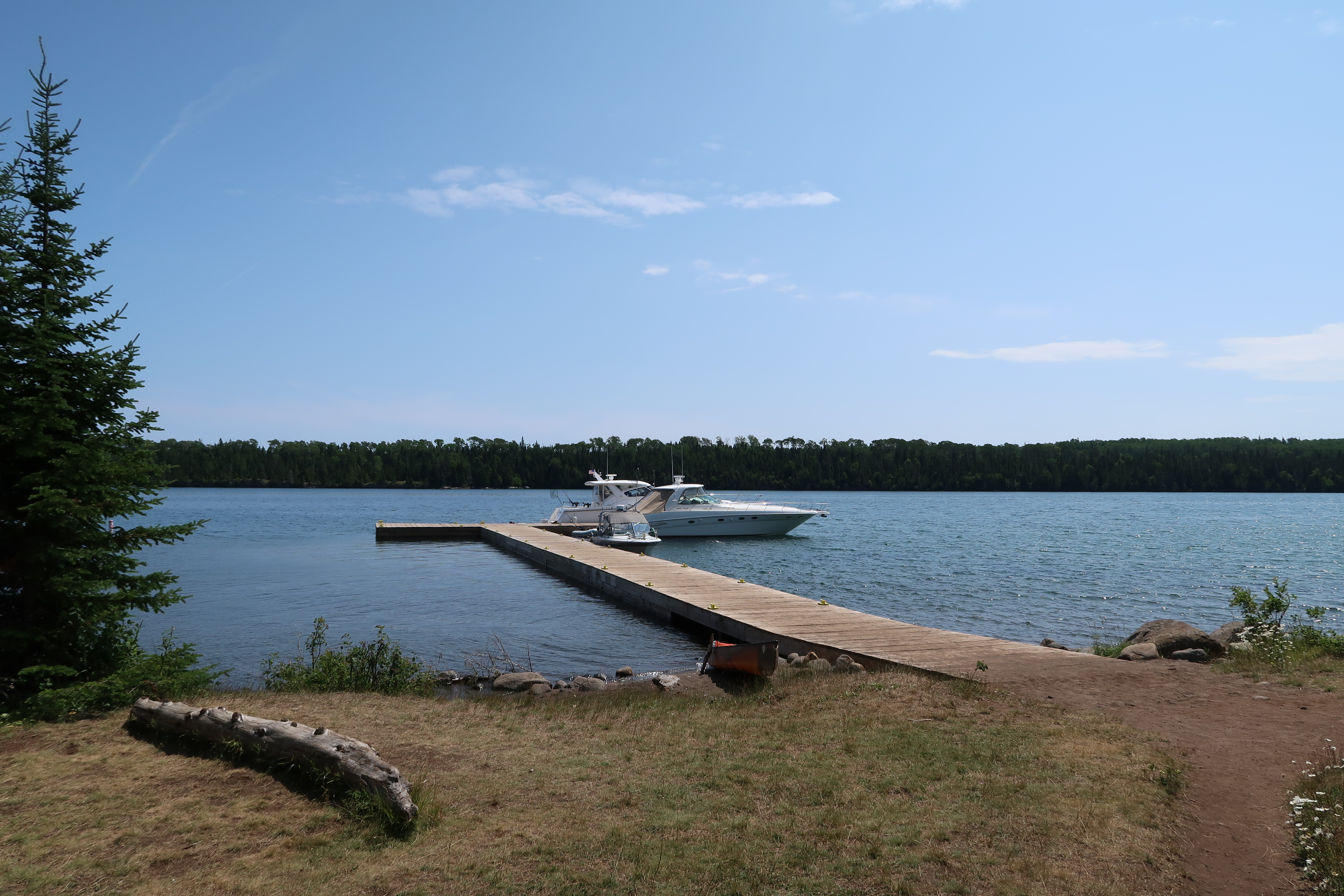 At Daisy Farm we were able to really relax. A much larger dock there meant I could get a running start to jump into Lake Superior, an exhilarating experience any time of the year. Quick baths were a big hit here, and sore feet were soothed by the cool waters.

Retiring to our sleeping bags, we spent a restful night listening to the nocturnal sounds of forest and lake. 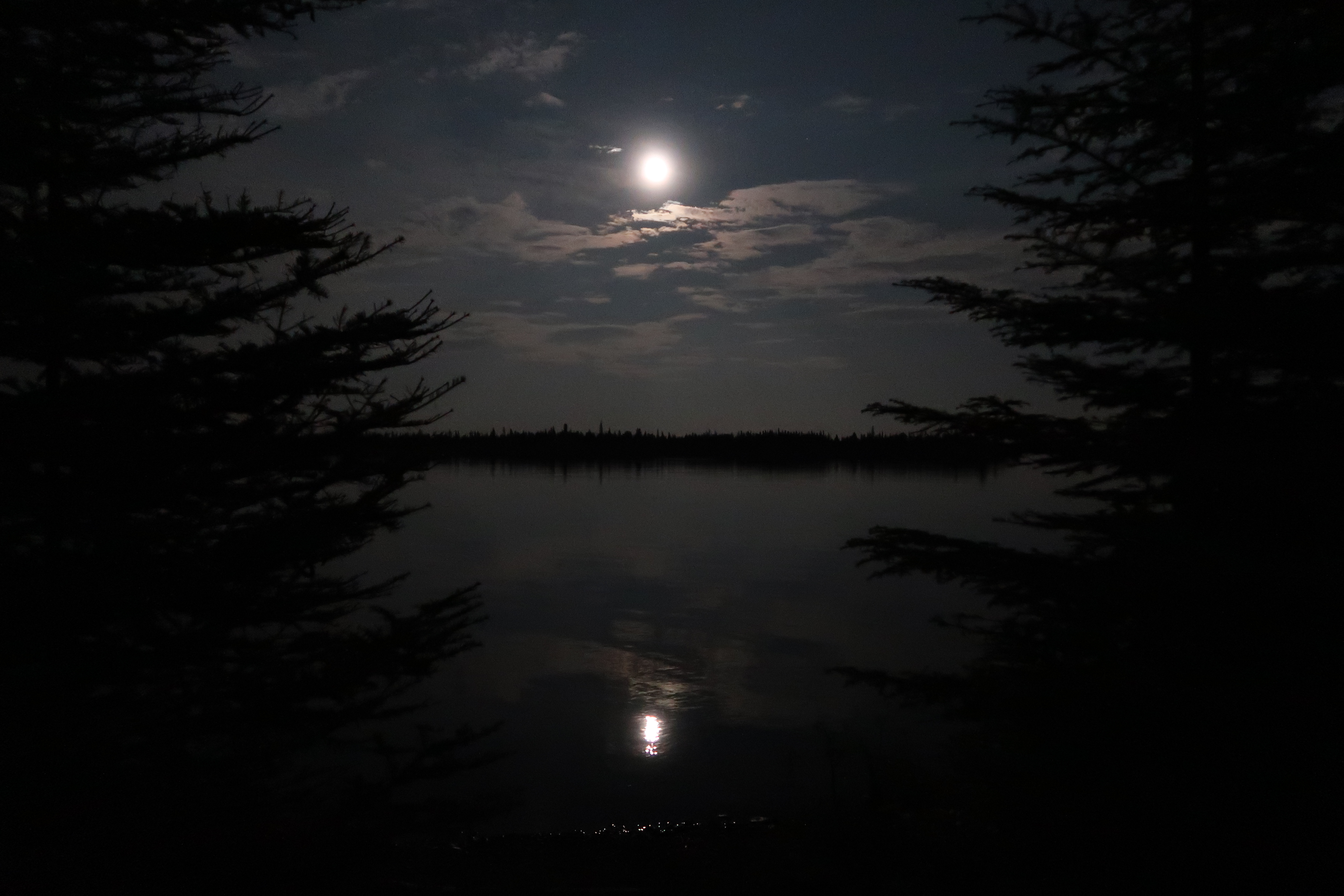 Fully rested we awoke the next day to make the trip back to Three Mile and Rock Harbor. With one more night on the island we set off again down the trail, taking frequent breaks and mostly enjoying ourselves with little regard for any schedule.

This is the best way to live life. Unplugged. 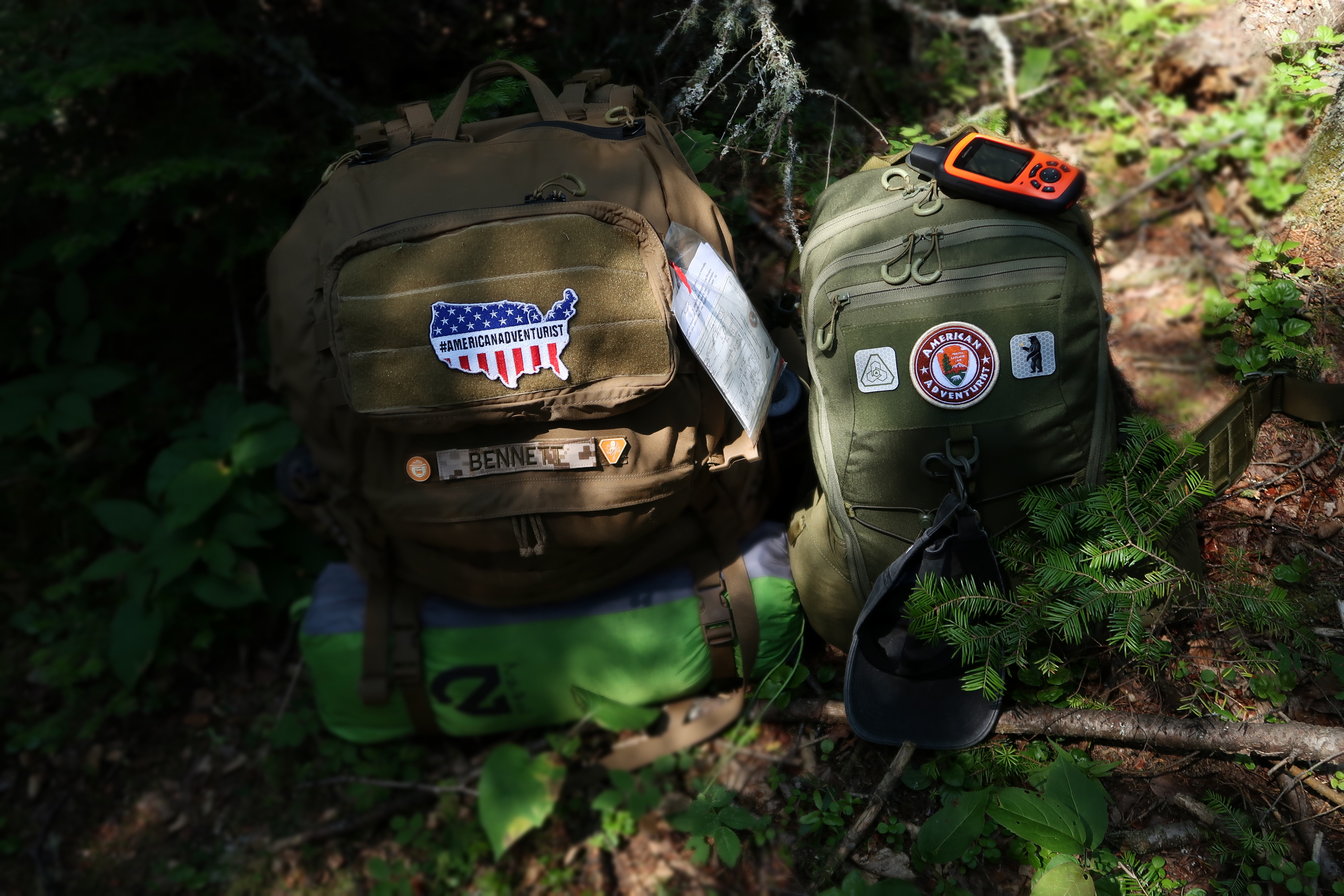 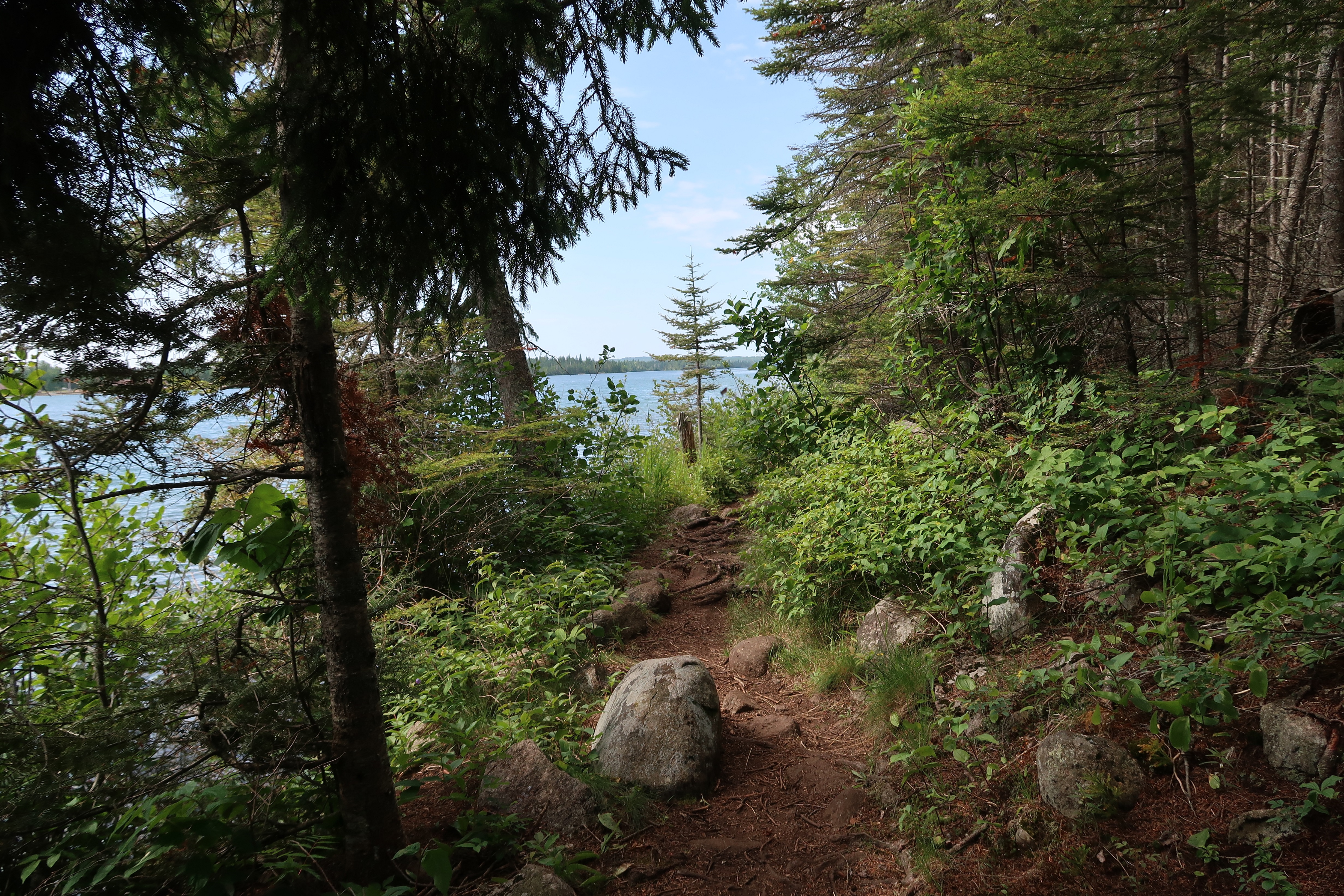 A Note on Water Purification: We pulled water every day out of Lake Superior with this Katadyn Pocket filter with zero issues. NPS recommends a filter specification of at least 0.4 microns, the Katadyn Pocket filters at 0.2 microns (!), the filter’s silver impregnated ceramic element is effective against bacteria and protozoa, and can filter up to 13,000 gallons (50,000 liters) before needing a new ceramic element, depending on fresh water source and quality. I consider all surface lake and stream water to be contaminated with pathogens and so should you. Drinking contaminated water can make you very sick. Learn more HERE about types of contamination. To be 100% safe, water collected should be filtered and then boiled at a rolling boil (Jetboil etc) for at least one minute because most filters (even this one) do not filter out viruses. Viruses are typically found in warmer climates and they must be killed via boiling, adding chemicals like chlorine, or by using UV light from a device such as the Steripen. 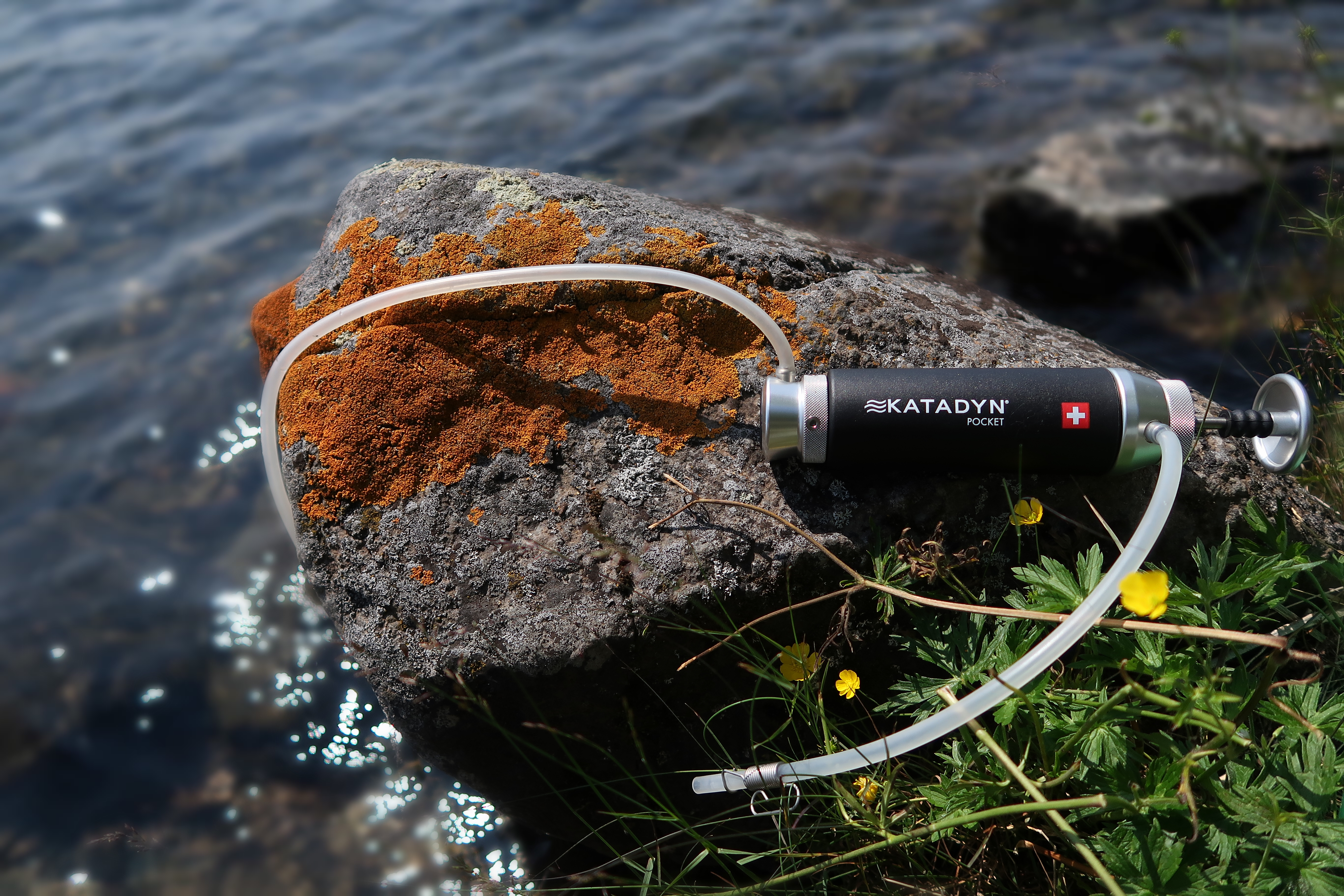 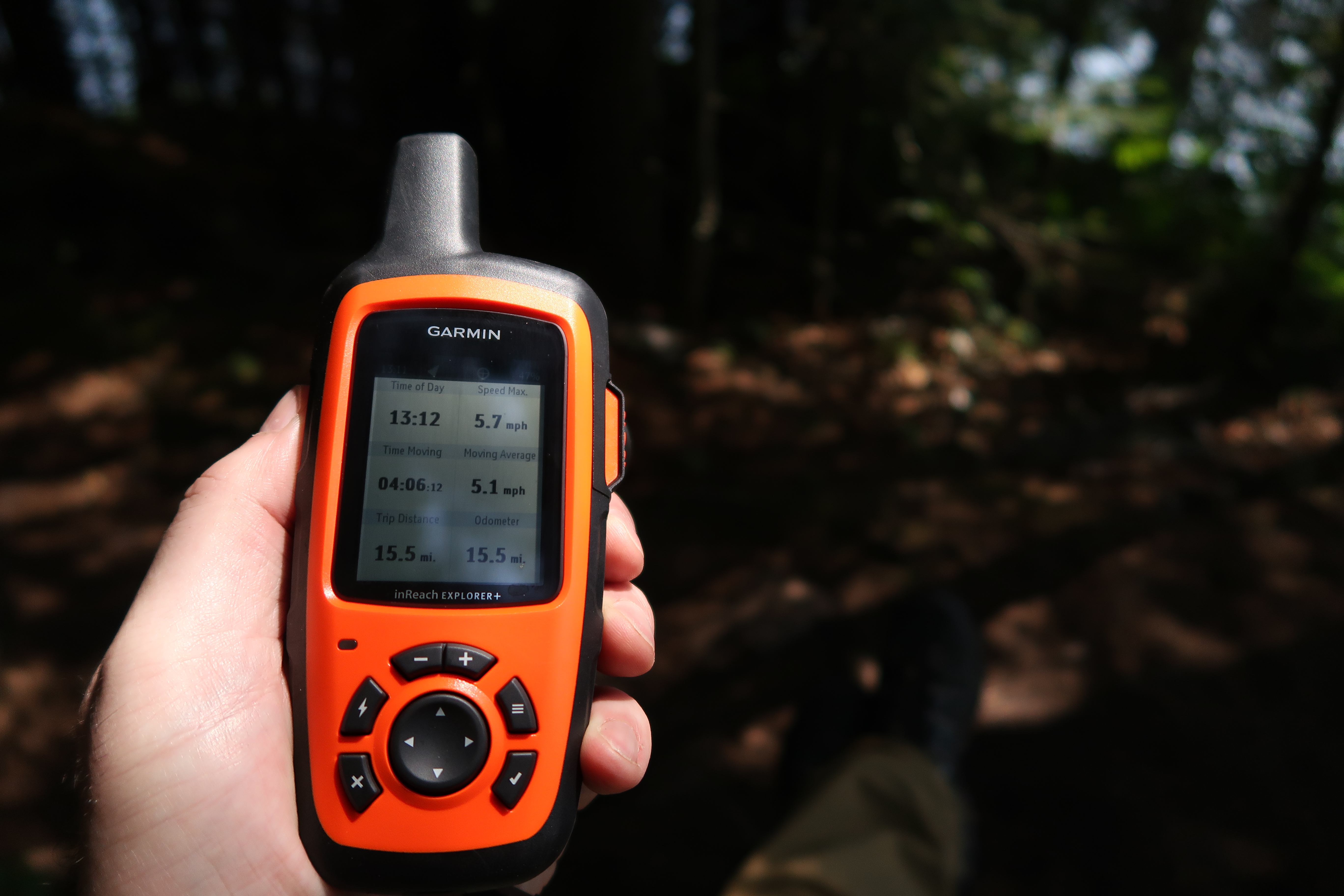 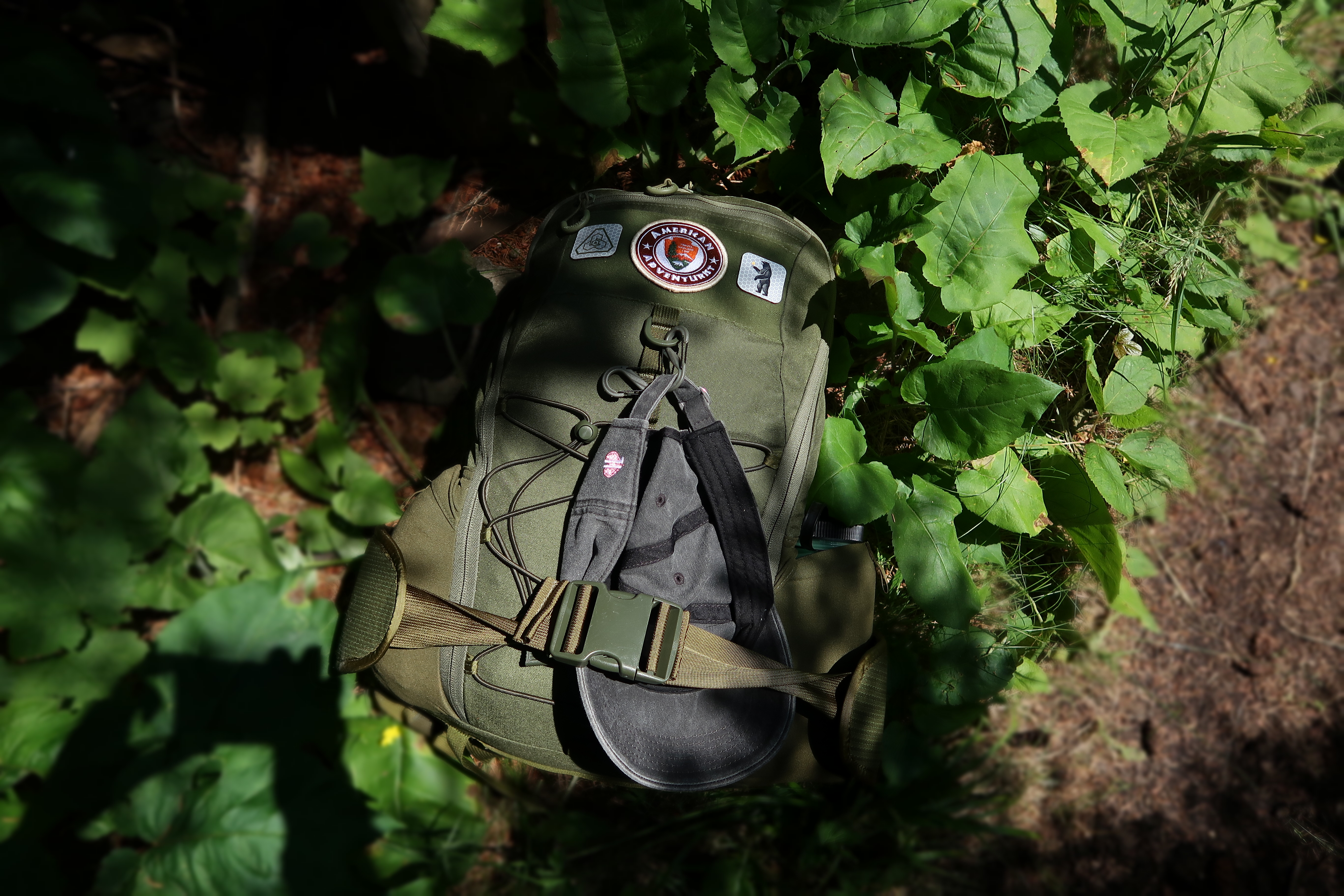 Arriving at Three Mile again, we scored another shelter and made ready for our last night on the island. At this point we really had a good routine going. Make camp. Eat. Swim. Relax. Once the sun goes down it’s bedtime, and we got on average of nine hours a sleep each day, something that NEVER happens at home. Early to bed and early to rise is a thing on the Rock. 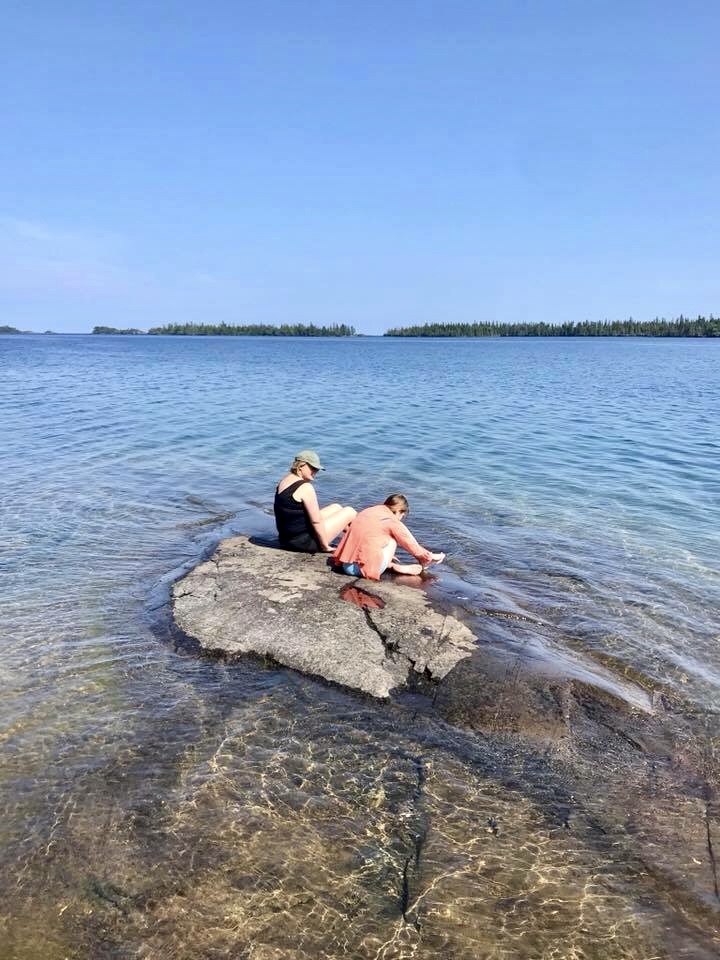 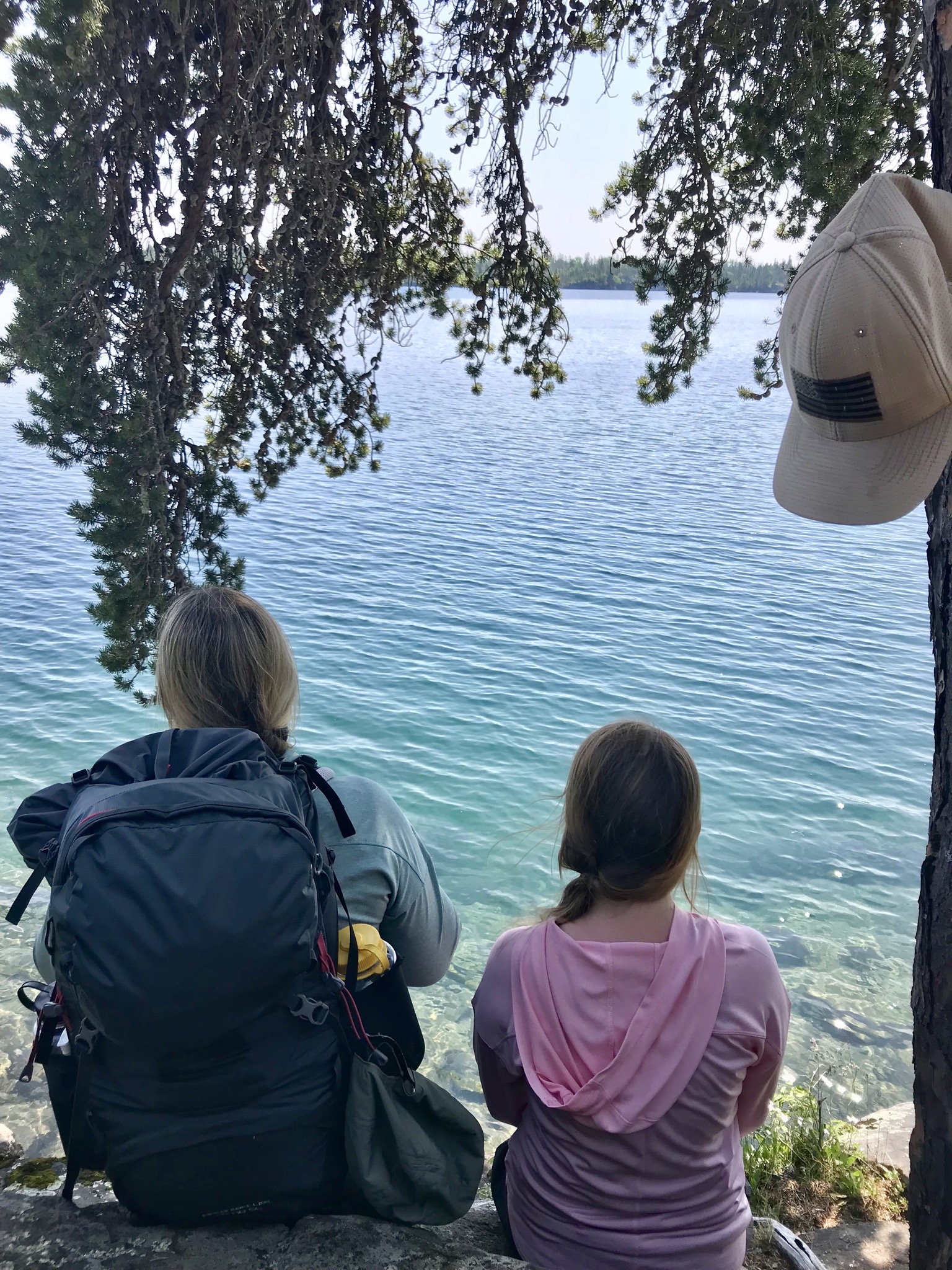 Our last morning on the island meant it was time for some rewards. We were looking forward to a hot lunch at the lodge at Rock Harbor and our scheduled plane ride at 3 PM meant hot showers and clean sheets that night in Houghton. With this on our minds, we made much better time from Three Mile to Rock Harbor on the way back than we did on the way in, and we arrived there in time for lunch and a leisurely wait for the plane. 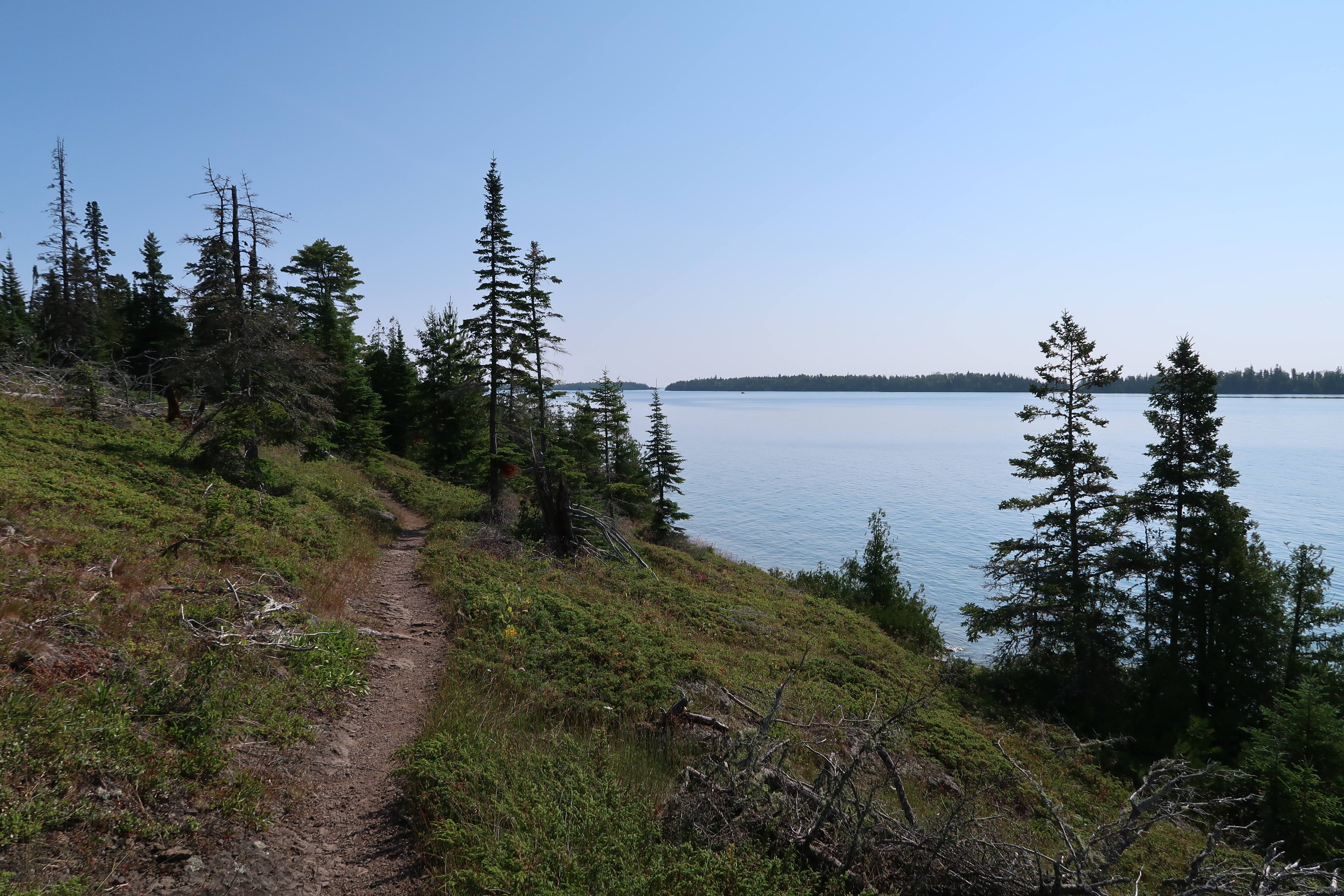 Four long days on the island and we were still smiling. It seems that life without Wi-Fi had not been the end of the world after all. 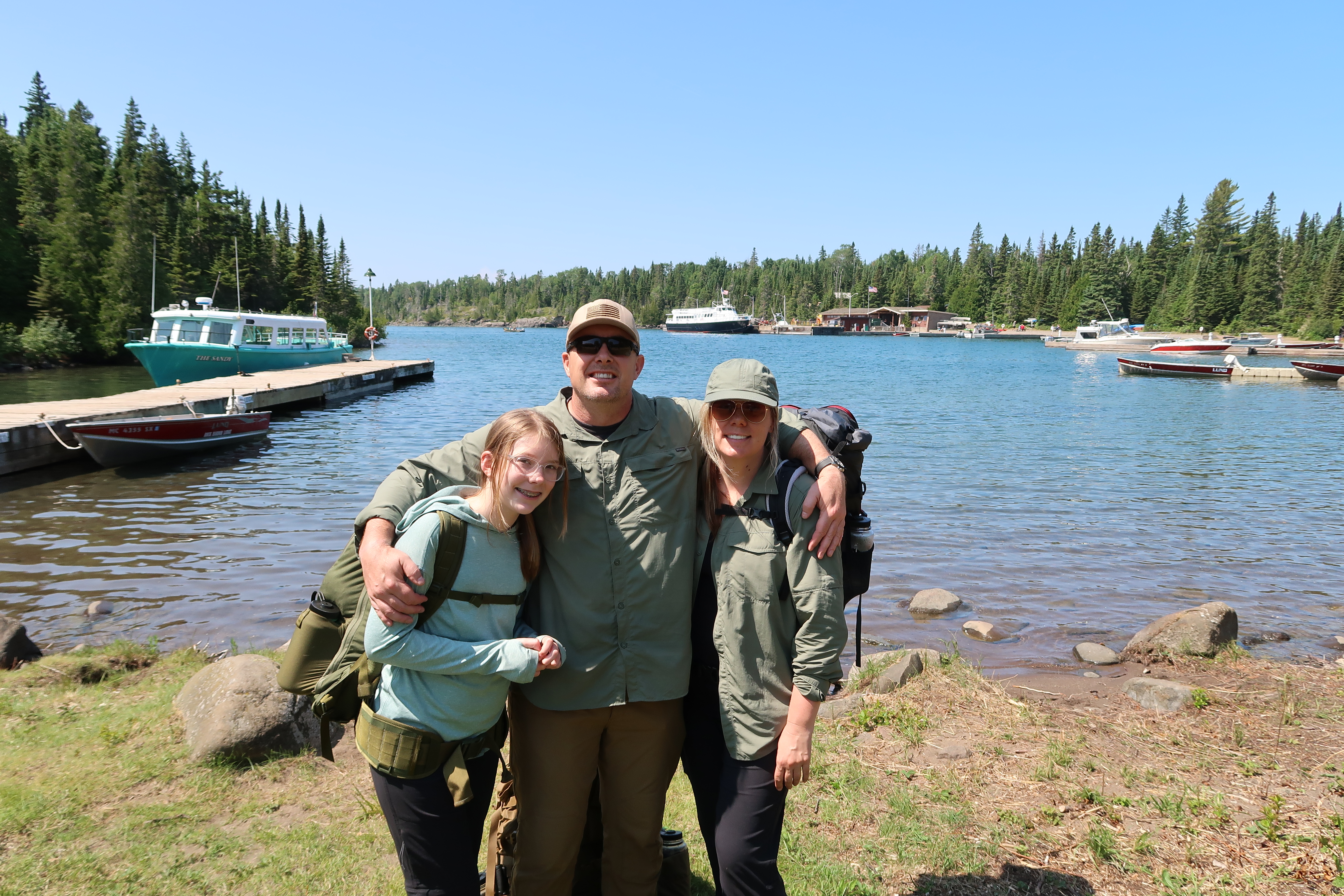 Back at the seaplane base at Tobin Harbor, it was hurry up and wait and I was in no hurry to go back to the world. I seriously considered hijacking this small boat for the short crossing to Canada, and the never-ending adventures that life on the lam would bring us, but the damn plane came along and they would have spotted us in the harbor. This time it was a Cessna flying in to get us, a Cessna 206 Super Skywagon to be exact. 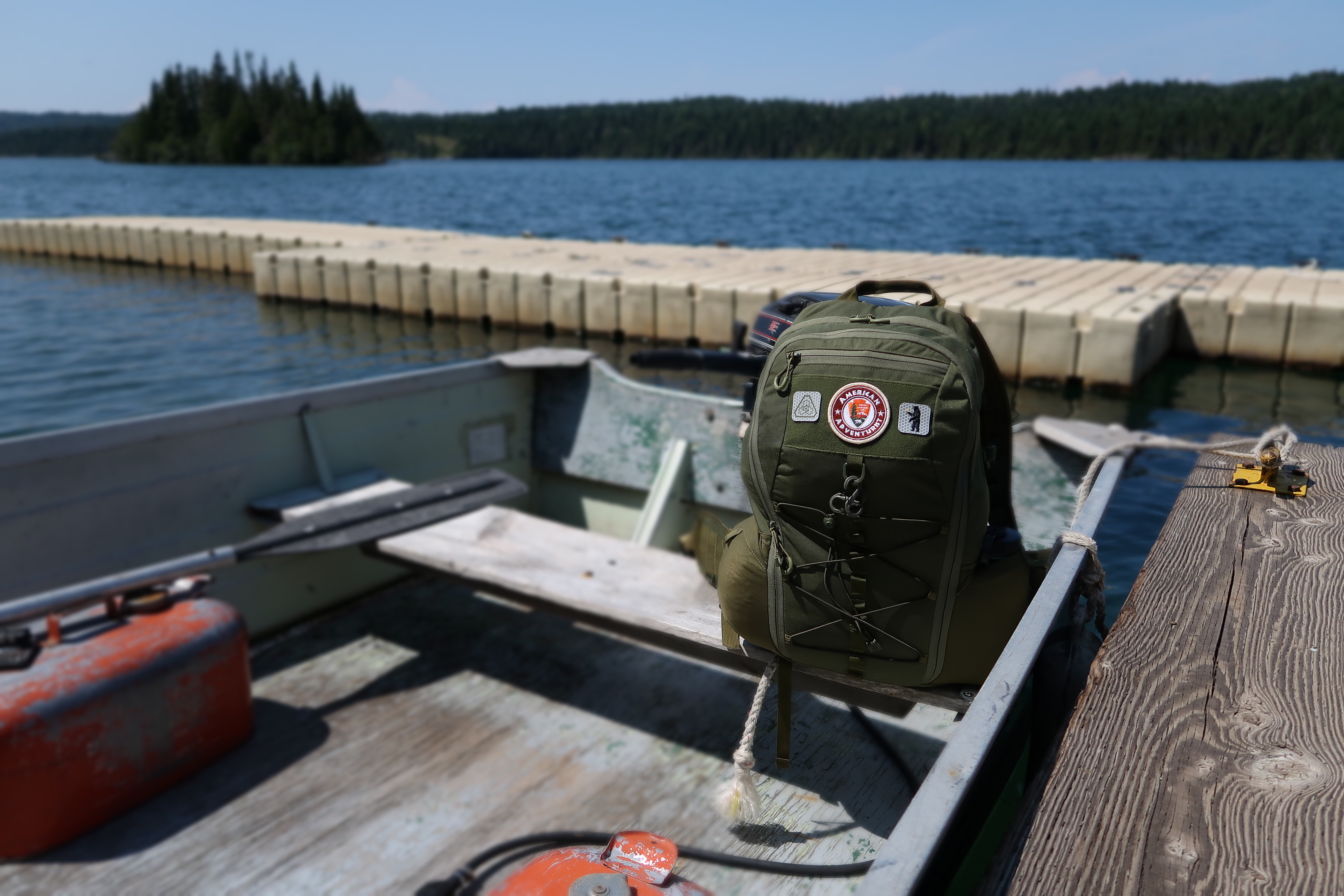 Back to reality, clocks, and a phone about to blow up with emails, voicemails and messages once we reached Houghton and civilization. 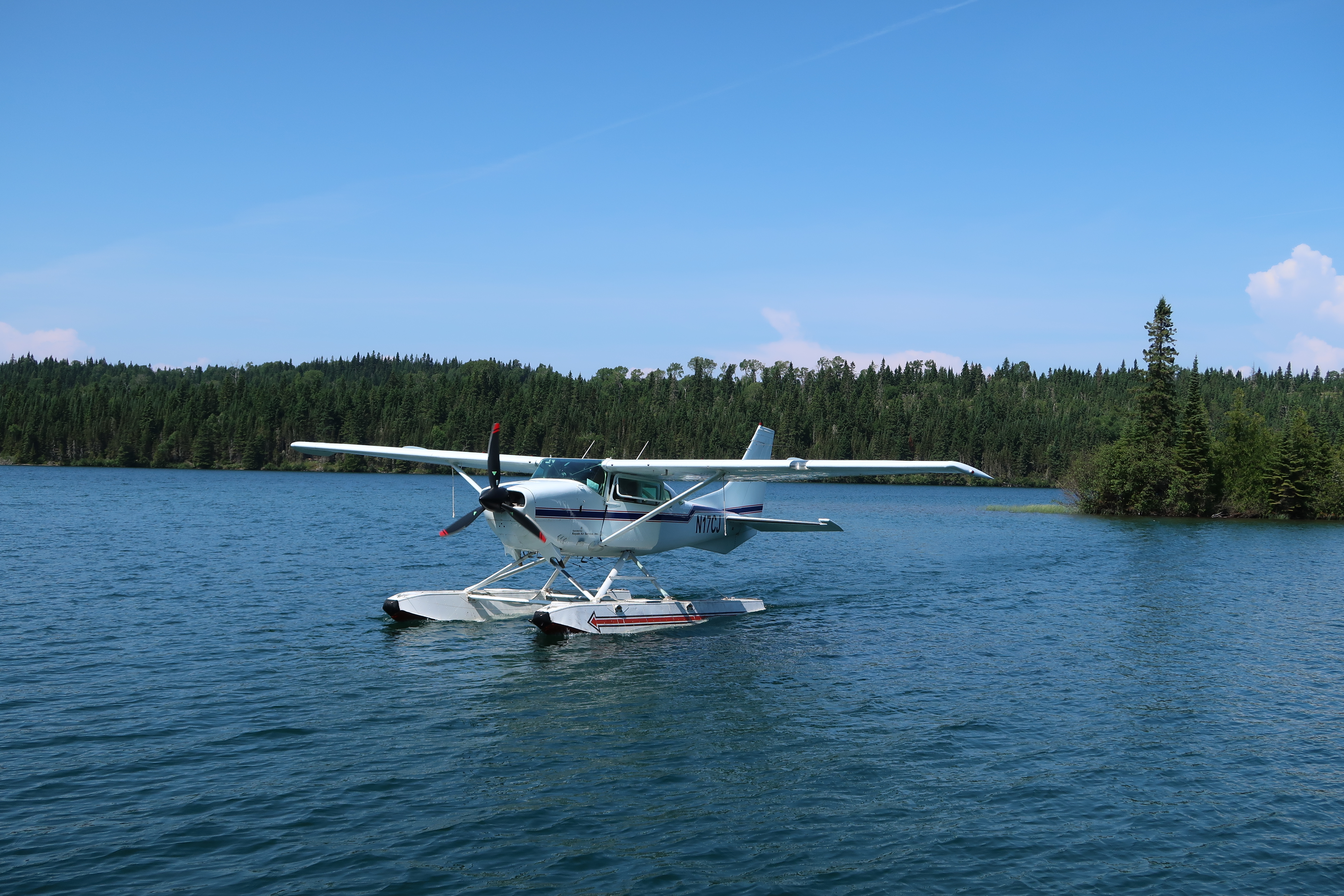 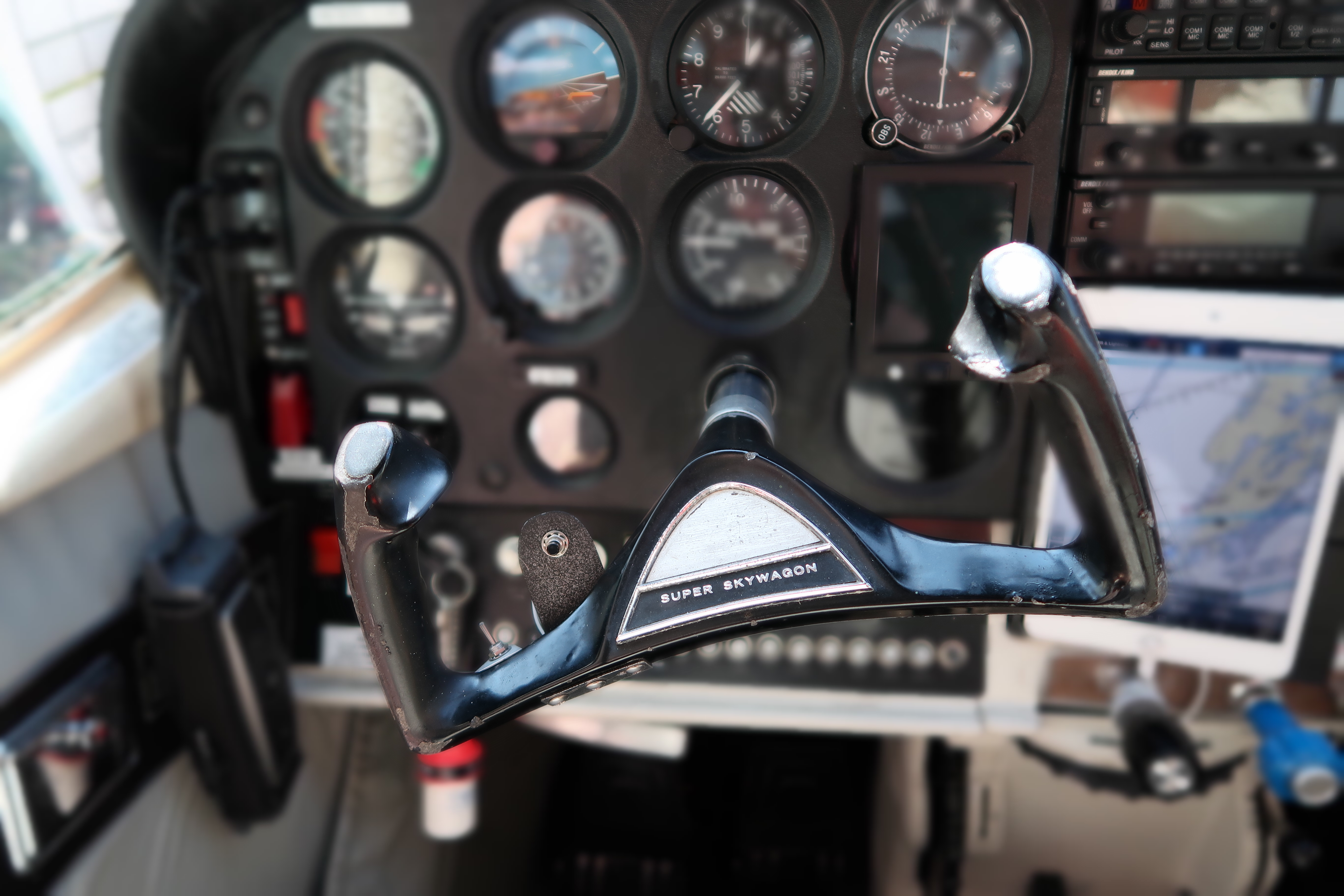 And just like that, Isle Royale was behind us, a distant memory of one fine summer where we said yes to Adventure and hopped on a plane to nowhere. This was our best trip yet and we can’t wait for the next Adventure!

Full Disclosure: The travel arrangements, equipment and provisions for this trip were funded entirely by the author, and all endorsements and opinions in this article are unsolicited. #IndependentMedia