Fly In. Camp out. : American Adventurist

Here at Adventurist Life, we have categories for the various modalities adventurists like us use in our pursuits. Drive, Hike, Paddle, Ride, and so on. You see these represented in our shirts, hats, patches, and such, in the form of the steering wheel, boot prints, paddles, and a bicycle wheel.

What we haven’t yet used is our ZOMG category. It’s reserved for more of the jaw-dropping, er-mah-gerd-type stuff. Today, we’re excited to bring you our first such story. It’s a conversation with a guy who, with his co-pilot Maverick, flies his airplane into remote lakes in Ontario to camp out on an almost weekly basis.

For starters, can you tell me a little bit about yourself? Where you’re located, what you do for a living? (Be sure to mention your co-pilot!)

I live in Kitchener, Ontario and I am the Director of Engineering for a company called Maluuba. Maverick is a year and a half years old and he comes to work with me and is in my office all day, he’s basically with me 24/7 and is super attached to me.

He loves flying and swimming – he will swim all day even if no one’s in the water, he will just swim semi circles around the dock for hours. He also trains for obedience, rally obedience, and hunting competitions since he was a pup. 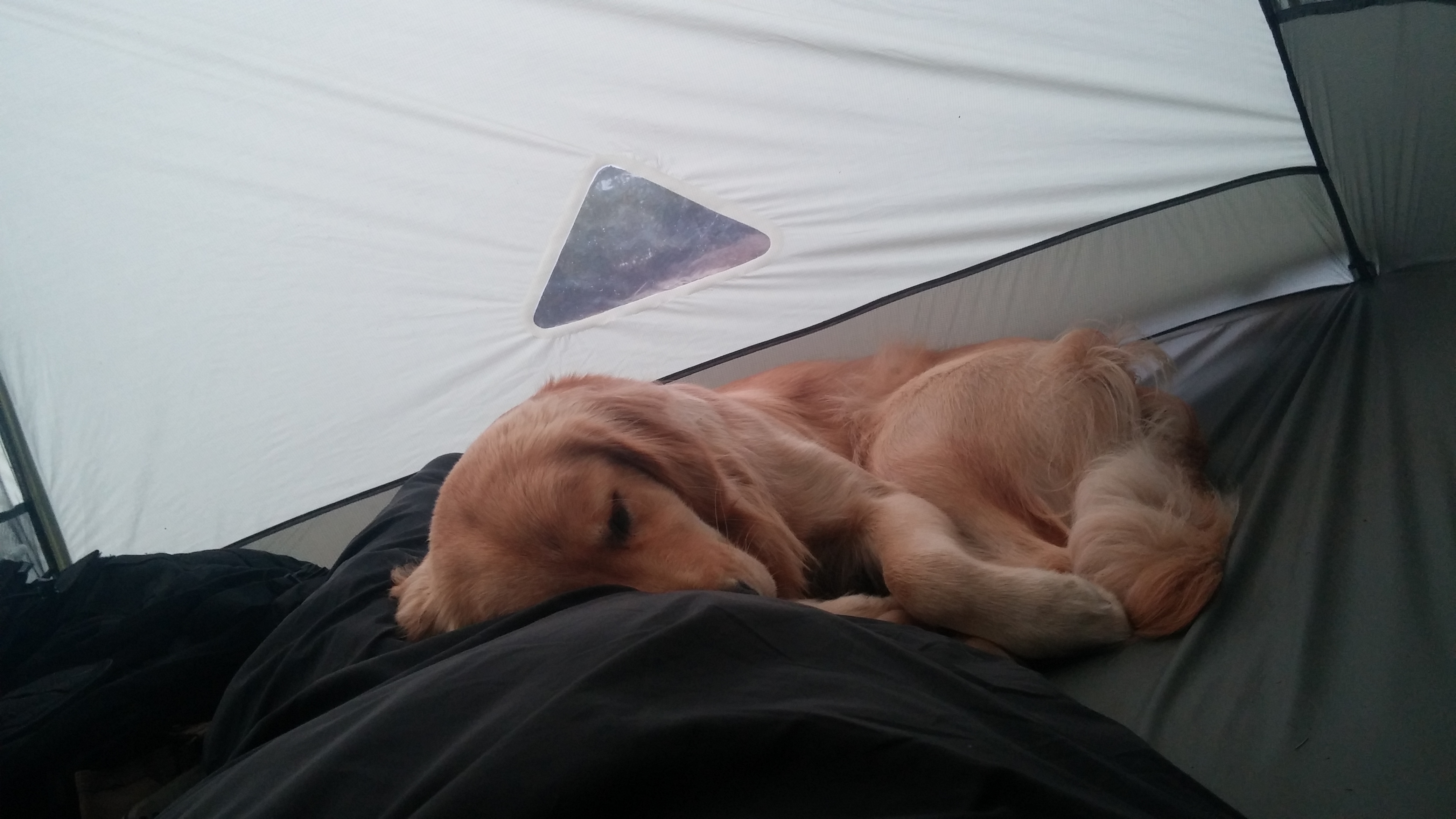 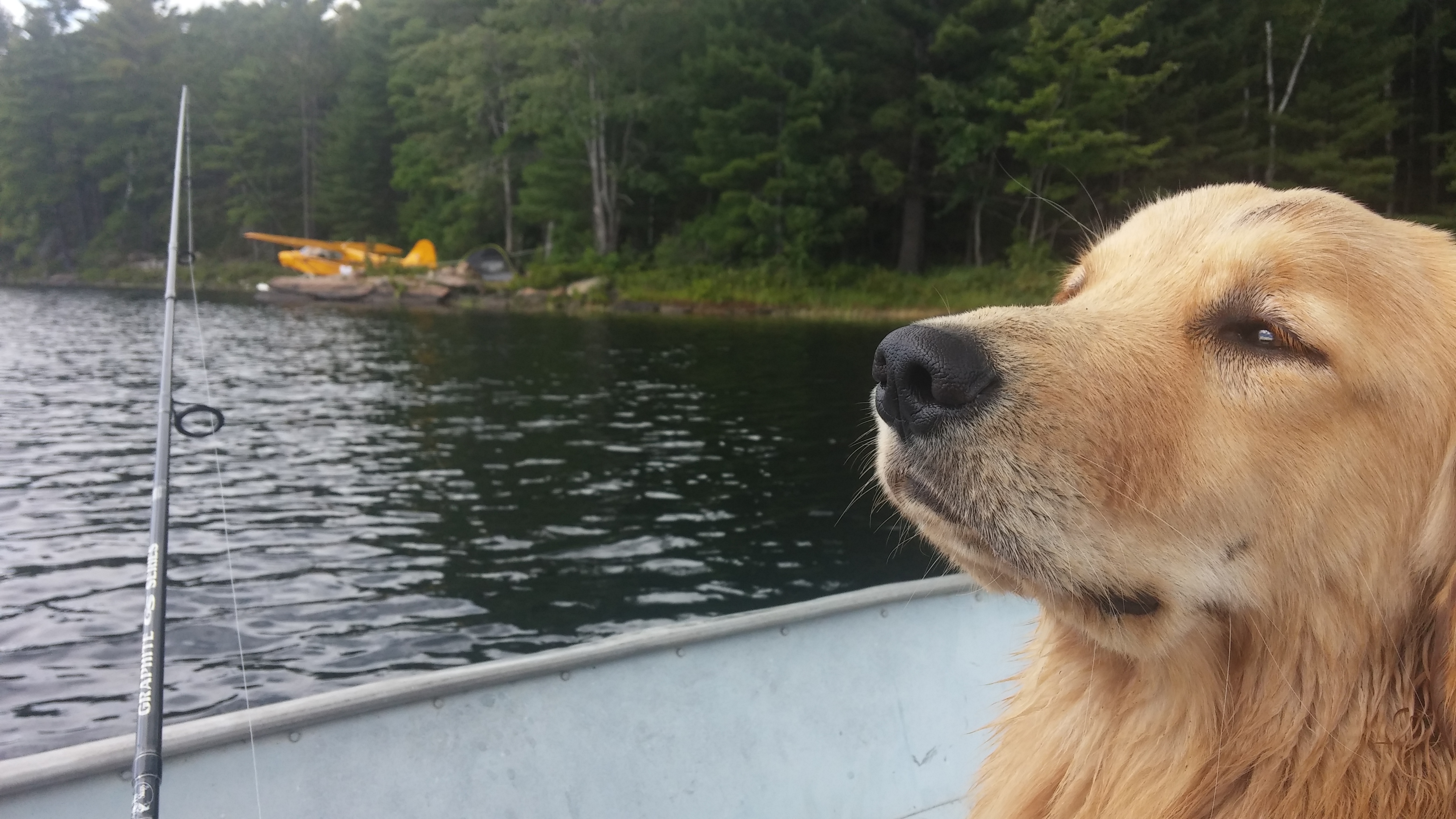 I saw you mention not having a fancy car and that $10k/yr would cover maintenance on a plane like yours. I’m curious how you came to own the plane in the first place. What’s the backstory?

I’ve been obsessed with flying since as long as I can remember (I have pictures from when I was like 4 or 5 sitting in fighter jets at museums, so I guess when I was quite small.) When I graduated university I considered joining the Air Force, but I had a full time job so I said I’ll just get my pilot’s license instead and do it as a hobby and join later if I want to.

I ended up meeting some pilots with planes through my flight instructor and became close friends with them when I started looking for a plane. I ended up buying JUN which used to be owned by one of my friends. (He sold it to a guy in Blind River, Ontario, and the I bought it off that guy).

I actually keep the plane at the original owner’s house (on a lake in Cambridge), so he’s happy to have it back in his backyard as well (along with his new plane). It’s a great little plane and perfect for a first time owner. It’s as simple as it gets and is real stick and rudder flying—it is a Piper Cub after all.

It came with floats as well as hydraulic wheel skis, so the adventures continue in the Winter where I can land on anything from grass, pavement, gravel, beaches, sand bars, snow, ice, etc. Maverick of course comes along, and doesn’t have to bundle up as much as me. 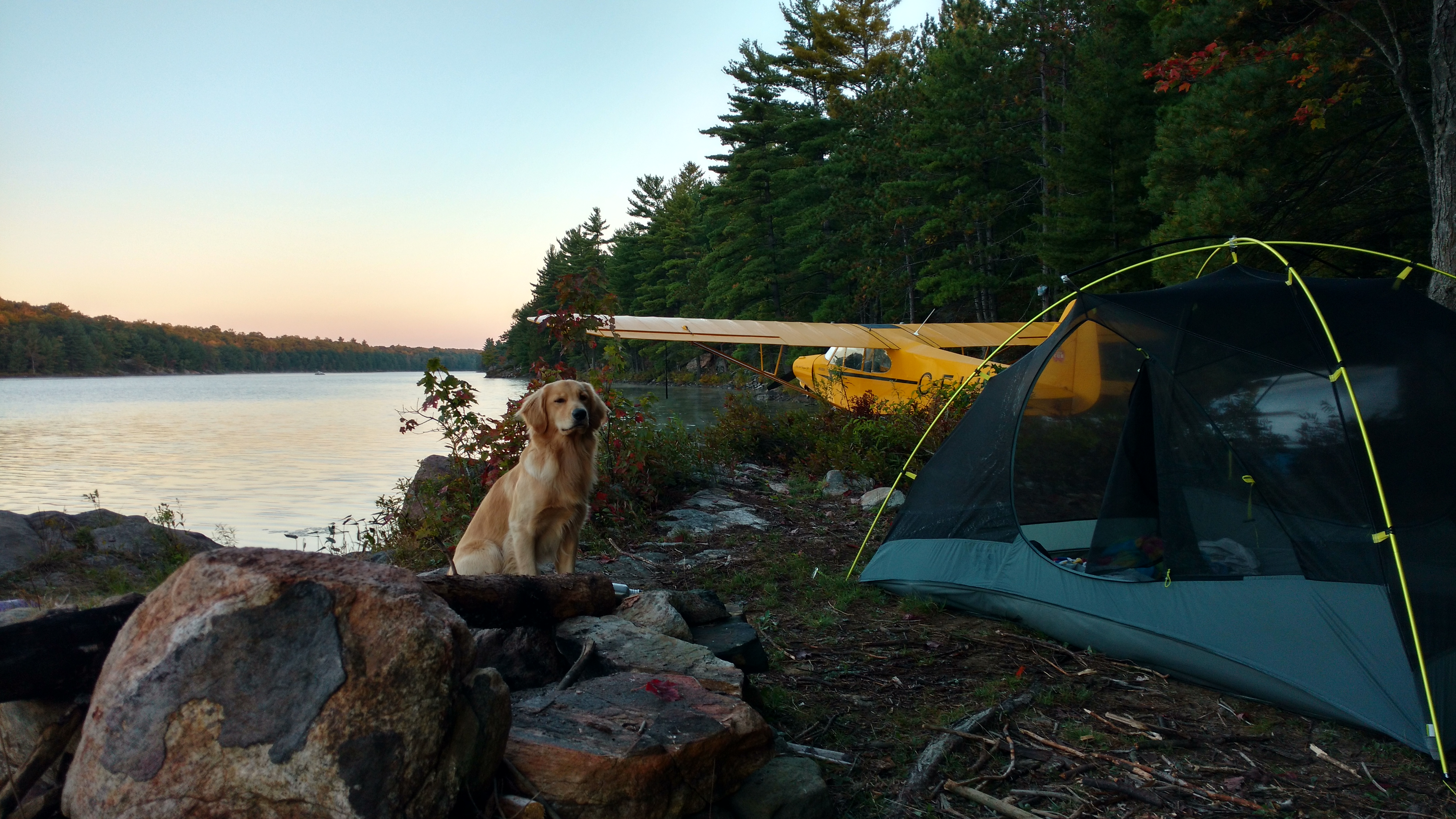 Tell a little more about FJUN? (Epic tail number if ever there was one.) Maybe some details a casual reader might find enlightening mixed with a couple a pilot might appreciate?

JUN is a Piper Cub from 1946—it’s been modified into a PA-11 with a 100hp engine. The small engine and year is usually a huge surprise to non-pilots. It’s a great plane for Maverick and I and it has an electric starter so I don’t need to hand prop it to start it, which would be very difficult on floats with a dog in the back.

You can fly it with the door open. It cruises at about 70mph, so it’s not much faster than a car, except you can fly direct. The $10k/year would cover everything flying related for the year, from maintenance to operating costs and things I need for the year that are plane related.

How often do you get out? Where do you go? For how long? And how do you decide where to go?

In the summer I fly every weekend; if not up to my cottage for the weekend then to one of my camping spots either close by or way up north, depending on if I have a longer weekend or an extra day off or something. Most of my camping trips are just 2-4 days.

Got a favorite location? Maybe a secret spot you can tell us about, share a couple pictures, but not give away the exact location (unless you want to – how many of us could get there by truck, right)?

I definitely have a couple secret spots that I go to often. They have boats hidden in the bush so I typically bring my 1.2hp motor and use the boat to fish. For the further trips, I usually have a good idea of where I am going, but while I am up there I may take half a day to explore and try to find new nearby spots.

For shorter trips, I usually have an idea or area of where I am going—usually if I spot something interesting or a cool looking spot then I will go there and see if there’s a spot for me to set up a fire and pitch a tent. 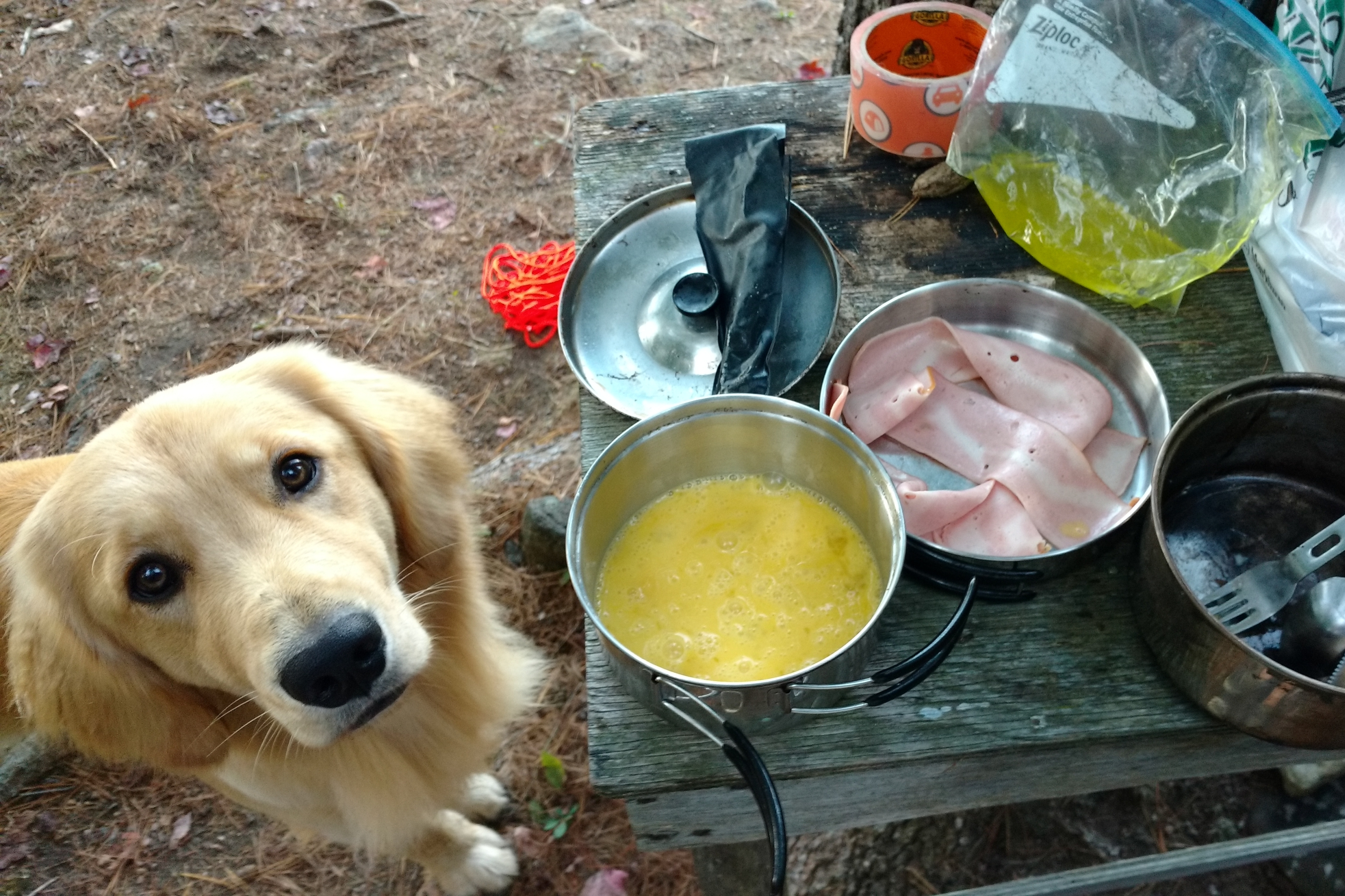 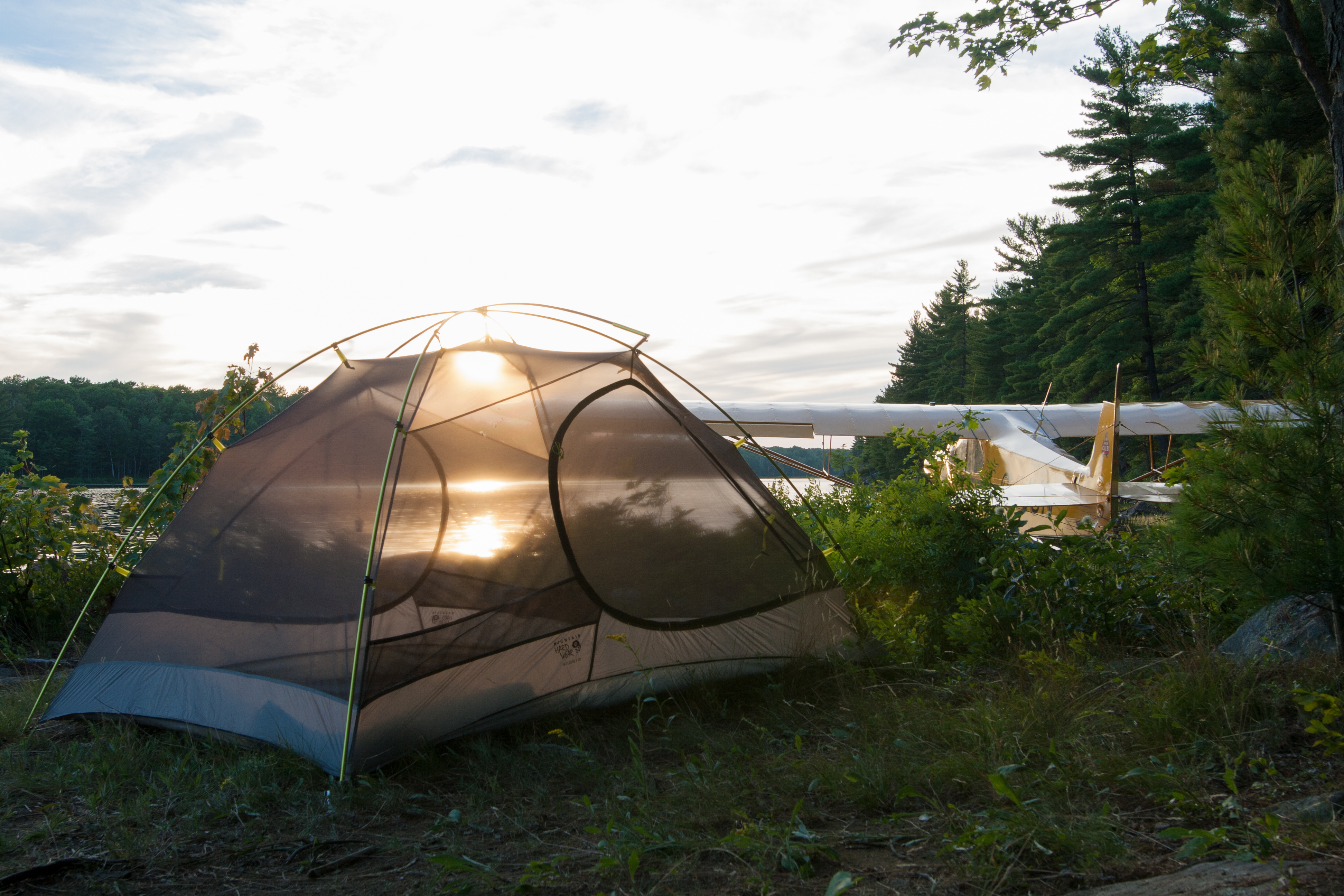 I’m curious how your plane-based adventures compare to those of us who are grounded, ya know? Like, do you just hop in the plane and go on a Friday morning and park it on random lakes? To that end, how do you know where you can and can’t land?

In Canada you can basically land anywhere, except for some provincial parks. You just gotta make sure the lake is big enough to get out of, because you can land a lot shorter than you can take off.

What I like about it is that, pretty much wherever I decide to go, I know that no one is going to be around for miles and miles. Whereas if I go camping via canoeing and portaging, which is fun as well, my go-to spot could be taken or there may be a couple other people on the lake.

I love the fact that I can go away for a long weekend and not have to deal with anyone or anything. I do have a SPOT with me when I fly for safety reasons so that if I get stuck somewhere that a select few people know where to find me, because I often don’t know exactly where I am going.

A man has his own airplane and flies every weekend. And he’s looking to plan a two month, nearly coast-to-coast adventure from Toronto to Alaska, through NWT and Yukon. I’ll be frank. This is the stuff of dreams for many adventurists. In your estimation, how difficult would it be for someone to go from, say, truck-based adventures to getting wings? What’s involved? What’s a realistic timeline? Can you put a ballpark price tag on such a thing?

I don’t think it’s necessarily difficult to get your pilot’s license; you just have to be dedicated and potentially make some sacrifices in order to fly on a regular basis. The timing all depends on your schedule—you can try to fly every day the weather is good enough to do your training, in which case you can probably do it in as little as four months. However, many people can’t fit this into their lifestyle, which means you may fly once every couple weeks—many of which may get cancelled due to weather—and then some lessons have to be repeated. It ends up taking much longer and costs more due to having to repeat lessons and so such. I would say that, in Canada, in order to get your PPL (Private Pilot’s License), it would be around $10,000 CAD. It is the same cost in the US from what I can tell from other pilots.

How would you say planning out a major adventure like you are compares to getting your license?

I know what you’re asking about the planning vs. getting license, but I don’t have a good answer for it. I haven’t planned it out yet! It’s something I want to do in the next five years.

Some of the issues will be because I am on floats, I can only land on water. Therefore, the biggest challenge will be picking a path where I can get fuel along the way. Civilization is sparse through northern Ontario, NWT, and Yukon, and I am limited to getting fuel on lakes, so it’s going to be extremely hard to get there and not just run out of gas in the middle of NWT, that is my biggest worry.

Fuel is only one factor on a trip like this. There is also camping and all the gear I need, rations for the entire trip, how much do I bring, or will I have to fish/hunt. I would say that planning this two month trip would be much, much, much harder than getting my PPL! 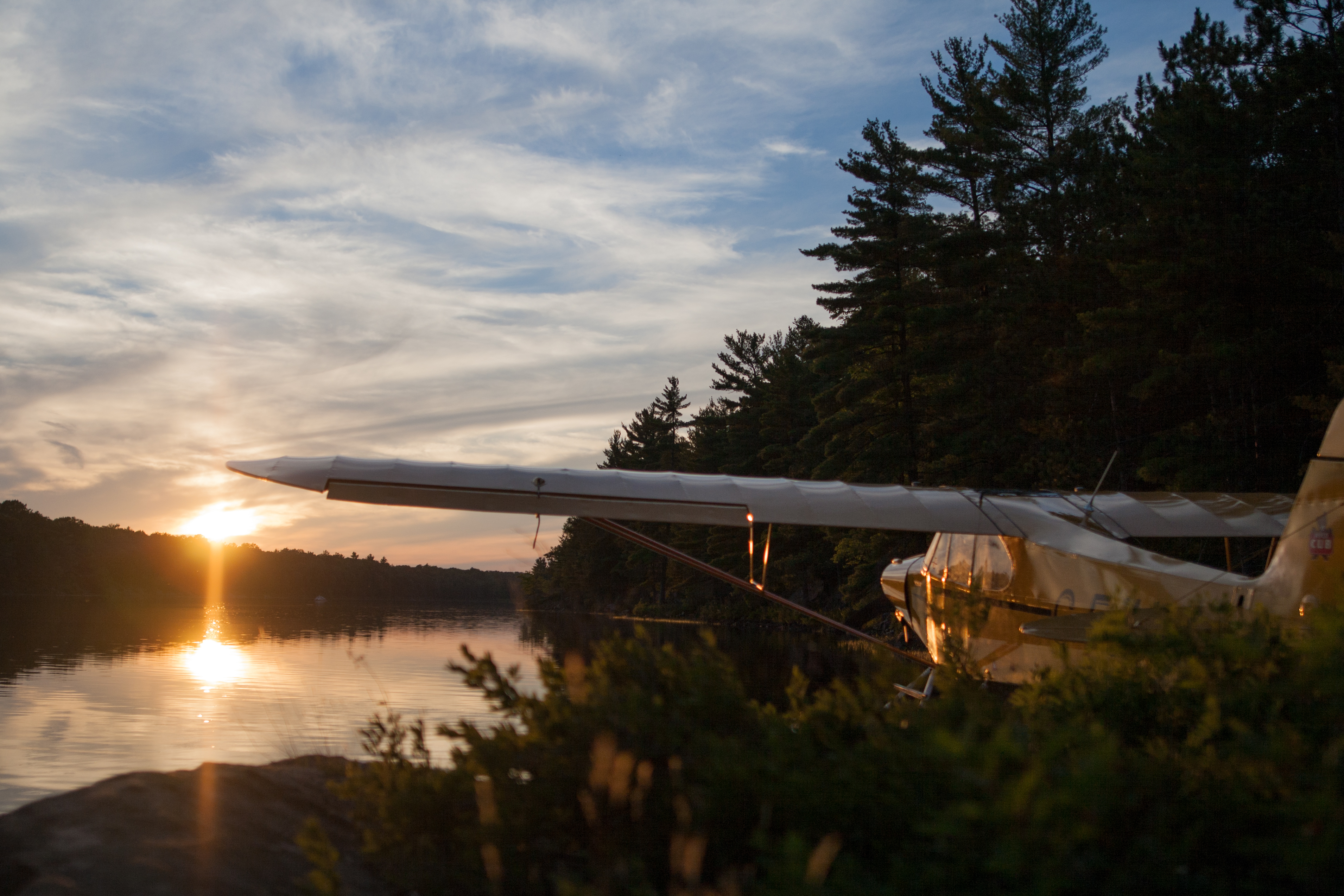 To that end, any advice?

My advice for getting your license would be to try to schedule lessons everyday before work so you can get your license as quickly and cheaply as possible. About 30% of those lessons will end up being cancelled anyways due to weather. If you can get a share on a plane and get your license on that plane, it may make more financial sense! If I were to do it again, that’s what I would do.

Where can people find/follow your adventures?

I should really have a blog, but I just don’t have time! For now I just post on Instagram (drewchie). One day I will start a blog though for sure!

T
team-adventurist
American Adventurist Life empowers our viewers to go confidently in the direction of their dreams. We’re a photography and design rich digital magaz...
An error occured.