A little over an hour east of Banff National Park in Alberta, Canada, lies the city of Airdrie. 40-some thousand people call this Calgary suburb home, including my friend Phil Hansford. A long time fellow Mitsubishi 4WD enthusiast, in the spring of 2016, Phil imported his third Mitsubishi Pajero from Japan—the exceedingly rare Pajero Evolution.

Being a long time Mitsubishi enthusiast and rally fan, I love the Pajero Evo. Imagine if there was a factory-built, street legal version of your daily driver that had competed in and swept Dakar. That’s how cool these things are. So I asked him to give us an owner’s perspective on this amazing machine and how it’s changed his priorities.

[AL] How rare is the Pajero Evolution?

[PH] A former engineer at Mitsubishi back in those heady days of success in motorsport said there was no longer anybody around from those days, but confirmed that there were 2,500 built. He didn’t say when exactly, but I did some digging and, as near as I can figure, based on build dates and chassis numbers, they were all built in the fall of 1997, and released slowly over the 1997, 1998, and 1999 model years.

This was no doubt tied to the [FIA] T2 homologation rules, which said that the car had to be a “production model.” 2,500 was probably the minimum number? There were very few badged as 1999 models, if the JDM auctions are any indication. 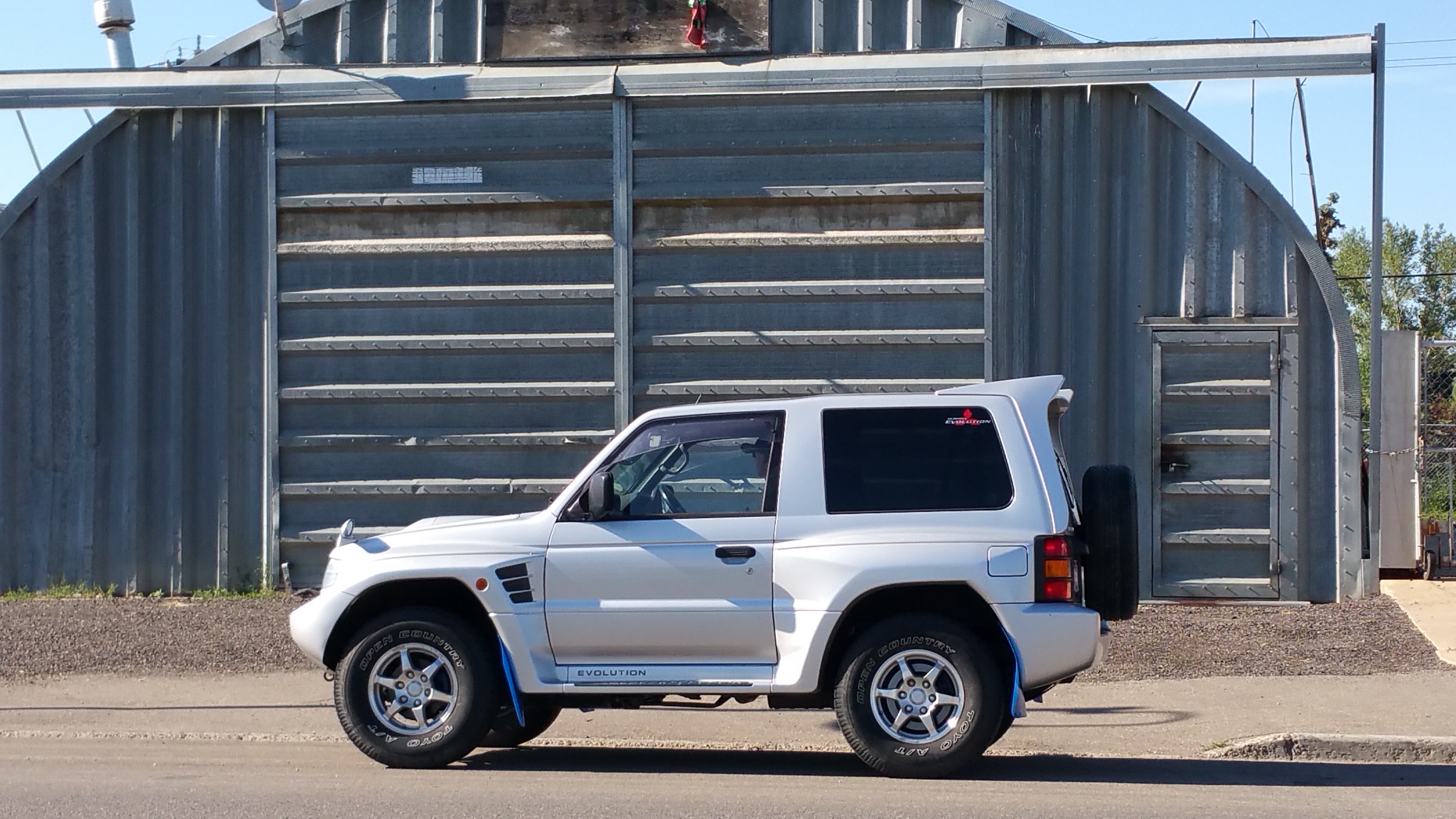 [AL] The Pajero Evolution has a formidable motorsport pedigree. How so?

[PH] As I said, they were put together in the fall of 1997, with the 1998 Dakar campaign looming on the horizon. In early January, Mitsubishi fielded the new Pajero Evolution, along with the “Challenger” (aka: Montero Sport [based on a different platform]).

When the victors blasted down the shores of Lac Rose, and the dust from Dakar had settled, and it was a Pajero Evolution in first place. And second. AND THIRD. A podium sweep. The Challenger rounded out fourth place, for a decisive Mitsubishi domination of the world’s toughest motorsport competition.

They enjoyed success in 1999 as well. Then the rules changed, and more modified chassis were fielded by all competitors. The third generation Pajero debuted in the 2000 Dakar Rally, although the similarity to the production model wasn’t as marked as it had been in the Pajero Evolution.

[PH] Quick for an SUV, but not Lancer Evolution fast—more like hot hatch fast. Zero to 100 km/h (62 mph) takes just under 7 seconds if my timing is accurate. Cornering is a ballet of body roll giving way to huge traction from front and rear limited slip Torsen diffs. It can be pushed, but its a bit of a leap of faith util you get used to the unique handling traits of a rally SUV.

Off the pavement, from what I’ve experienced so far, is unlike any other short wheelbase (SWB) model I’ve ever driven. There is little of the “porpoising” effect of most shorties, especially over washboard. The rear independent suspension, along with the heavy damping, keeps things on an even keel.

I don’t have any snow experience yet, although I’m looking forward to next winter!

Gas mileage is not abhorrent, but certainly nothing to write home about. I’ve averaged around 15L/100 km (about 16 mpg) so far. It’s just so damned hard to keep your foot out of the throttle. Speaking of throttle, redline is 7,000. And the automatic transmission will happily take you there in every gear without too much coercing needed. 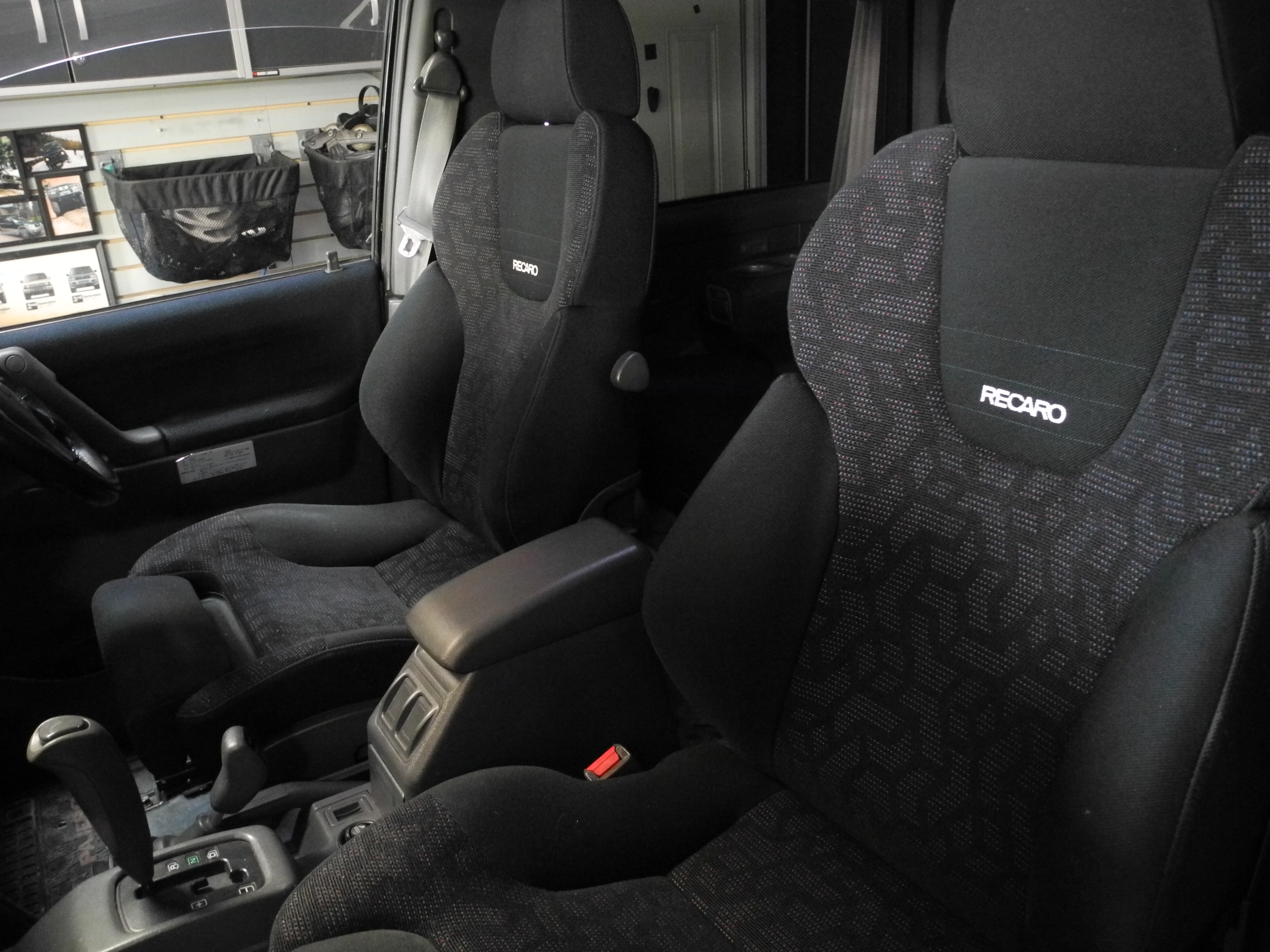 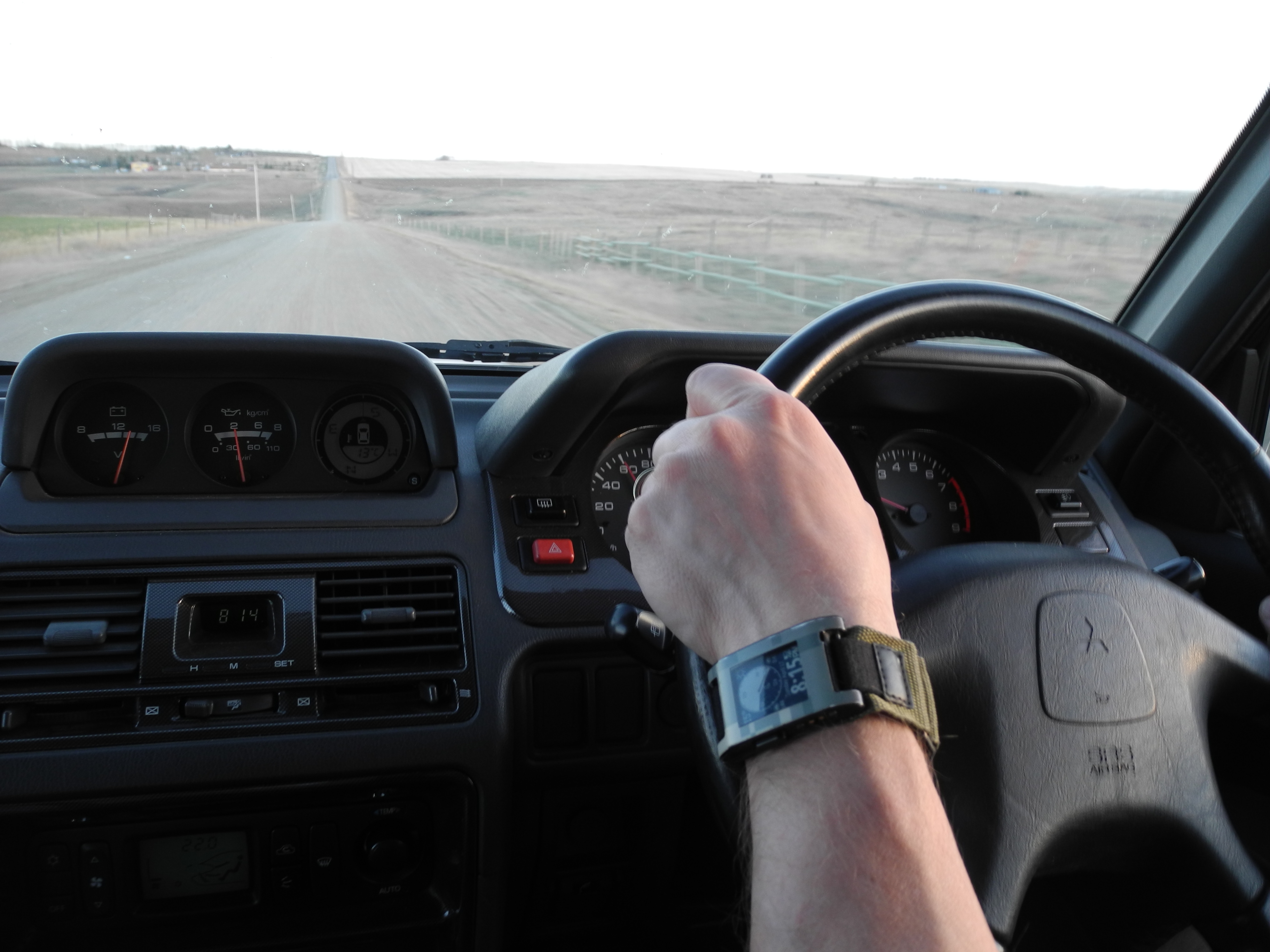 [PH] Starting with the interior, the Evo has Recaro seats, no cruise control option, no sunroof option, and carbon fiber trimming the dash and center console. The exterior, however, is another story.

The Pajero Evolution sports a full aero body kit with functional rear wings to increase downforce and stability at speeds in excess of 140 km/h (87 mph), extra fenders front and rear in addition to the gen 2.5 blister fender body [example of gen 2.5 Pajero], integrated side skirts, custom front bumper with integrated markers and fog lights, and rear bumper. It’s also got an aluminum induction hood that’s way lighter than that of a regular Pajero, with a larger grille, huge cooling vents in the fenders to allow more hot air to be pulled out. Otherwise? The same body as a SWB gen 2.5 Montero. 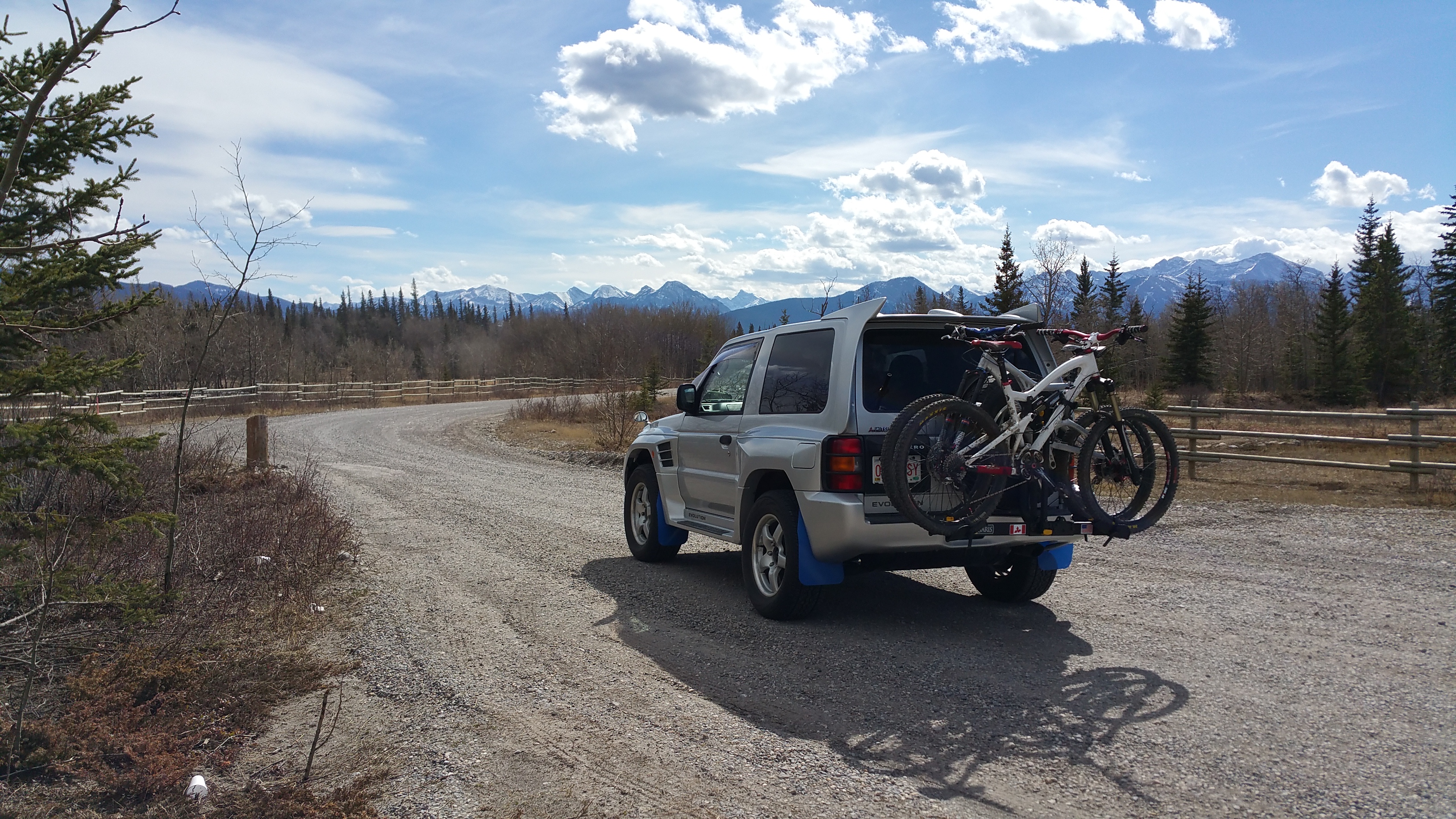 [AL] The differences aren’t entirely cosmetic, though, right? What mechanical differences stand out?

[PH] Mechanically? This is where it gets really interesting.

Mitsubishi did a one-off for the Pajero Evolution—the 6G74, 3.5L DOHC MIVEC V6. MIVEC being Mitsubishi Innovative Valve timing Electronic Control system, aka: variable valve timing. The second cam profile comes on over 5,000 rpm when the MIVEC controller kicks the solenoid. Different system than the present day MIVEC, but still very effective, with a redline of 7,000 rpm. More about that in a minute. From what info I can gather, the bottom end is very similar if not the same as the normal 3.5. The heads, valvetrain, etc., are different. Bolt-on accessories remain the same.

This engine was rated at 256 lb/ft of torque @3,500 rpm, and 276 horsepower at 6,500 rpm. Sound familiar? Yep, Japanese “gentleman’s agreement” again. How much real horsepower is up for debate. I won’t say it’s way over that, but I wouldn’t be surprised if it was closer to 290 than 280—completely unsubstantiated, butt dyno numbers, of course! 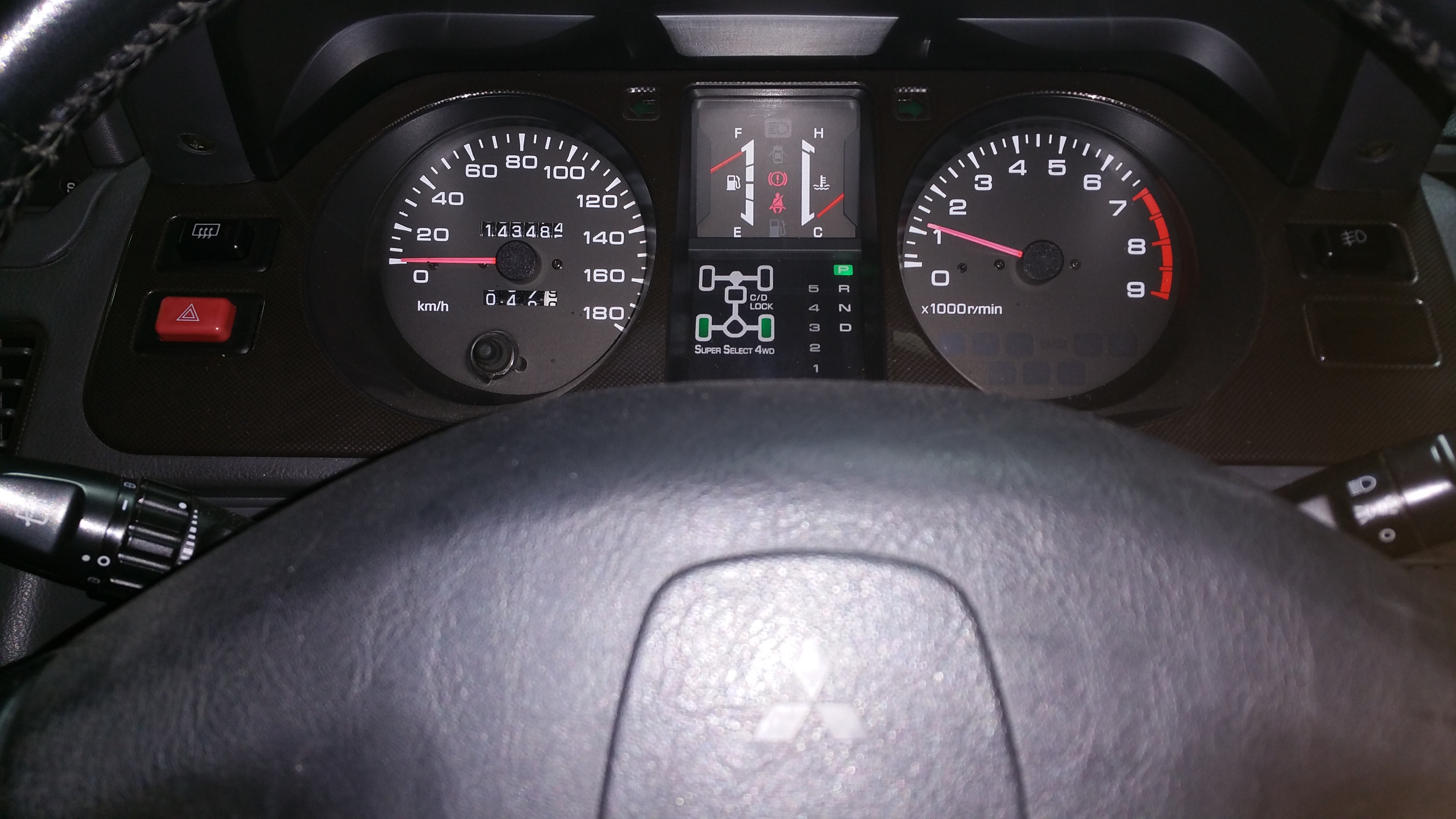 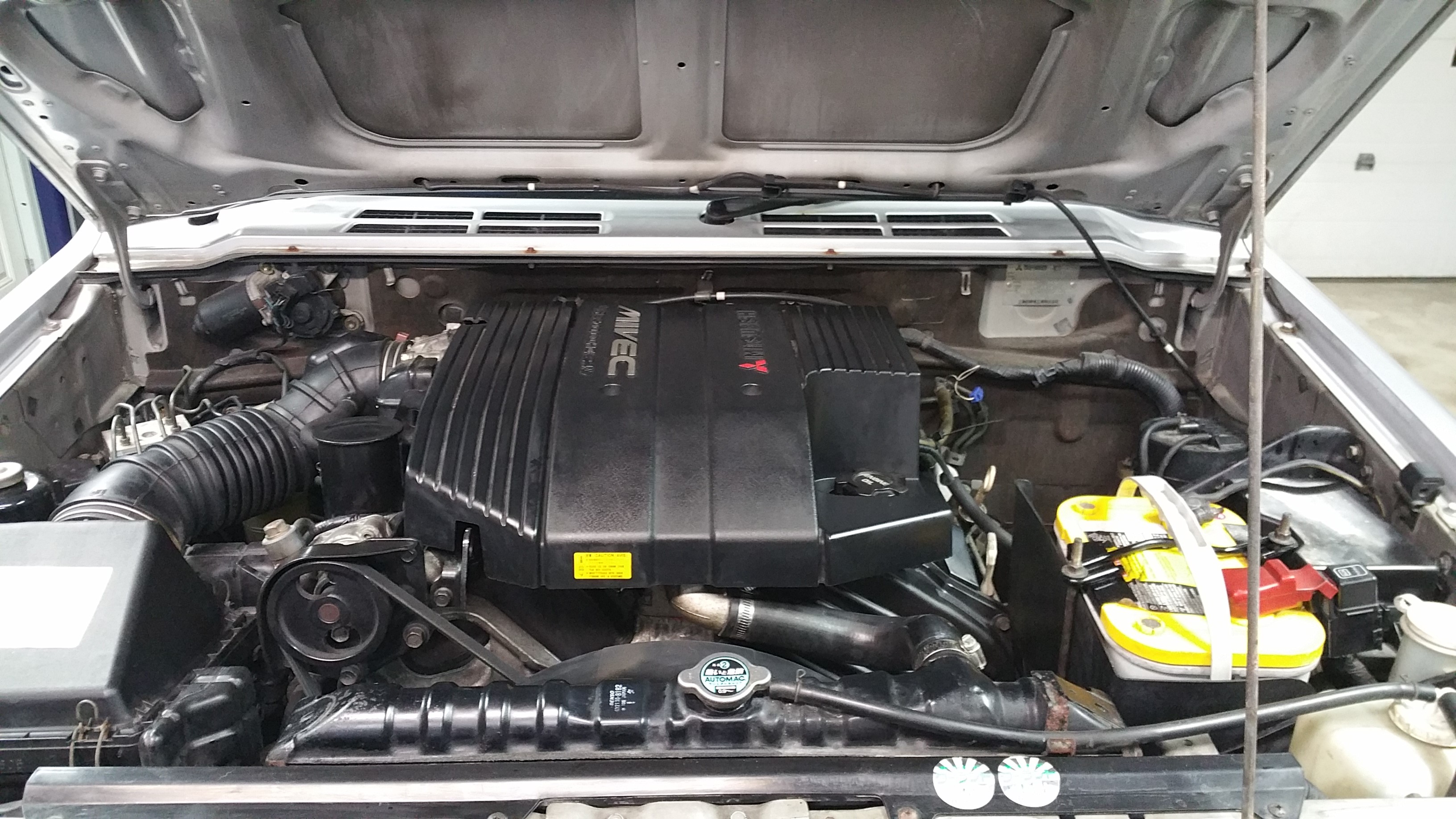 A 5-speed manual—which I couldn’t find—or a 5-speed automatic were available. I think the latter is one of the most interesting bits of the whole rig, despite being a slushbox. It’s very reminiscent of the later (2003+) gen 3 gearbox, which I have parked next to it in my wife’s 3.8 Montero. (I think there also might have been a de-tuned version available in some later JDM gen 2.5s as well, in the fancier Exceed Pajeros?)

In any event, it’s a 5-speed Invecs unit with tiptronic shifting if you don’t want to let it shift by itself. It also has an indicator which displays the gear you’re in, even when in auto mode. It shifts very aggressively, taking you all the way to the 7000 rpm redline in every gear if you let it.

I usually find I’m short-shifting it if I’m in manual mode, compared to when it shifts itself. Old diesel habits are hard to break I guess? Something else cool about it, if you crest a hill and then let off the throttle, it will downshift out of 5th and drop to 4th gear. How cool is that?

This is, of course, where much of the engineering went, and where the normal Pajero was thrown out the window. Bye-bye torsion bars and live axles! Hello independent rear suspension and coilovers! Mitsubishi even came up with yet another acronym for it—ARMIE—which stands for “All Road Multi-link Independent suspension for the Evolution.”

The front and rear were widened by 125mm and 110mm and travel was increased to 240mm and 270mm, respectively. The rear has coils, multi-link, and swaybars; again similar to the gen 3, only longer travel and lighter.

The front has aluminum upper and lower control arms, but retains the recirculating ball/nut-type steering (instead of rack and pinion). Steering feel is about the same as a regular Pajero—not exactly precise, but effective, and not bone-jarring through the rough stuff. But the suspension feel is way different. Supple, and long travel, but you feel like there’s something special under you as you seek out the biggest expansion joint you can find.

Finally, the chassis itself has extra gussets and plates added to compensate for the extreme stresses it would see in a racing environment. Yes, there is still a full ladder frame under there.

Front and rear diffs each have Torsen limited slip differentials (LSDs) in them. The front differential is even finned on the front cover for extra heat dissipation. Driveshafts appear to be standard Pajero/Montero items, as the numbers I’ve crossed over show the same u-joints, which is a relief. Transfer case is the same Super Select unit used in the gen 2, and the diff ratios are a desert-blasting 4.22 to 1.

There was a time when the vehicles we drove off the lot were only a couple degrees removed from the ones manufacturers campaigned at the highest levels of motorsport. Considerably more was spent on competition-only technologies such as driver safety, but overall, “homologation specials” like Phil’s Evo made the bulk of the performance upgrades available on the street. Though a technological marvel in its day—and clearly still retaining a technological edge in some respects—the Pajero Evolution represents an evolutionary look back into the past. When you could buy truly world class from the dealership.

After discussing so much of what makes the Pajero Evolution special, Phil and I got to discussing how he used his other JDM imports. Tomorrow we’ll follow up with Phil on those other imports and how he balances the desire to modify this truck for off-road adventures with preserving his investment in a rare collectible.