It’s hot. The heat is oppressive. The wind is blowing but it isn’t refreshing. Stiff and dry. The landscape is ancient. Rocky. Dusty. Barren. Like another planet. Mars but brown, not red. Still, I love it here.

I was first introduced to Anza-Borrego by my step-father when I was 13. He took me for a hike up Palm Canyon. The hike starts in the sand on the valley floor. The trail gradually begins to climb and the colors change. At the top, amid the sand and boulders, is an oasis. A small grouping of palm trees. Bright green palm fronds stand in stark contrast to the dark reds and browns of the surrounding rock. I was completely captivated.

We returned several more times. Sometimes for a hike. Sometimes for a family weekend in a rented house in Borrego Springs. I loved every visit. Life took me away from San Diego and I didn’t return to the desert of Borrego for many years.

When I did return, I was no longer exploring primarily on foot. I had built myself a truck. There were new areas of the park that I wanted to get to know. Areas that were much more accessible with a vehicle. 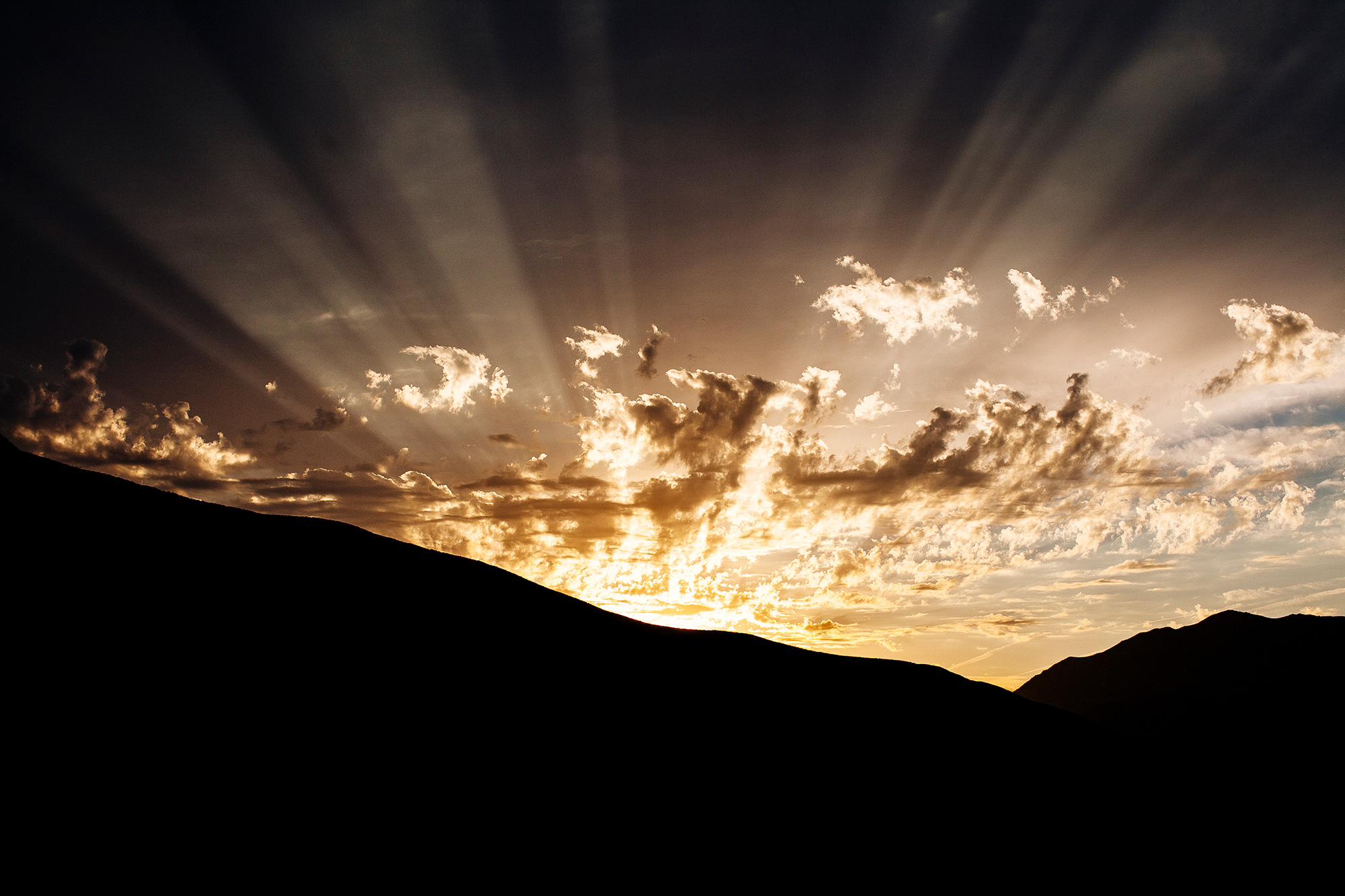 My first foray to the innards of the park was for a scouting run for the annual OAUSA Borrego Fest. We met in Julian in the pre-dawn light. The sun was just beginning to rise as we made our way out of town and down the hill towards the desert floor. 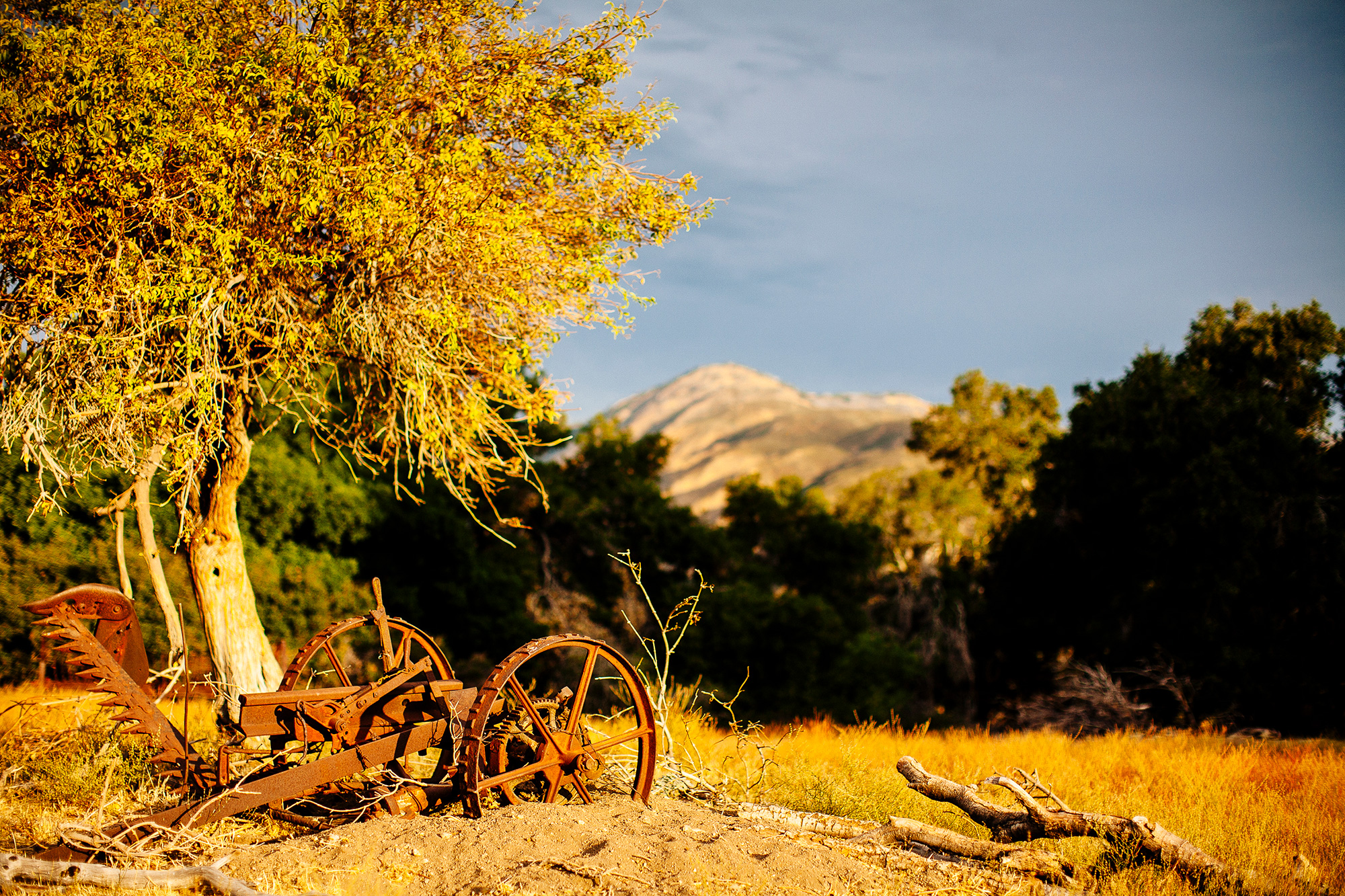 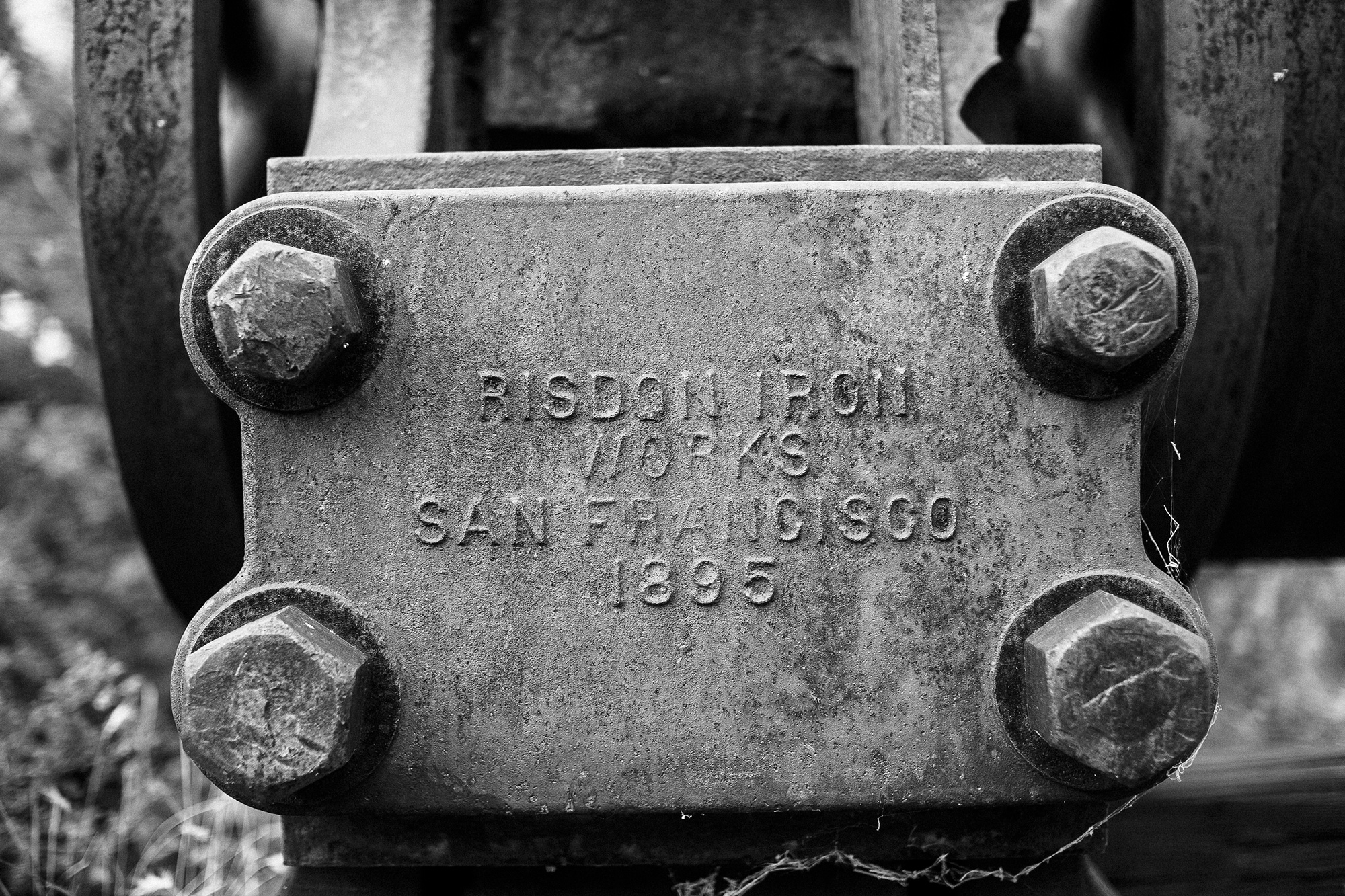 Halfway down the hill, we turned off the highway onto an unmarked, nondescript road. The familiar hiss of escaping air broke the still morning—the sound of tires being aired down. Up we climbed, twisting and turning along the side of the mountain. Ranch gates. Old mining sites. Over the top and the chaparral closed in, scraping and squealing against the sides of the vehicles. Desert pin striping. 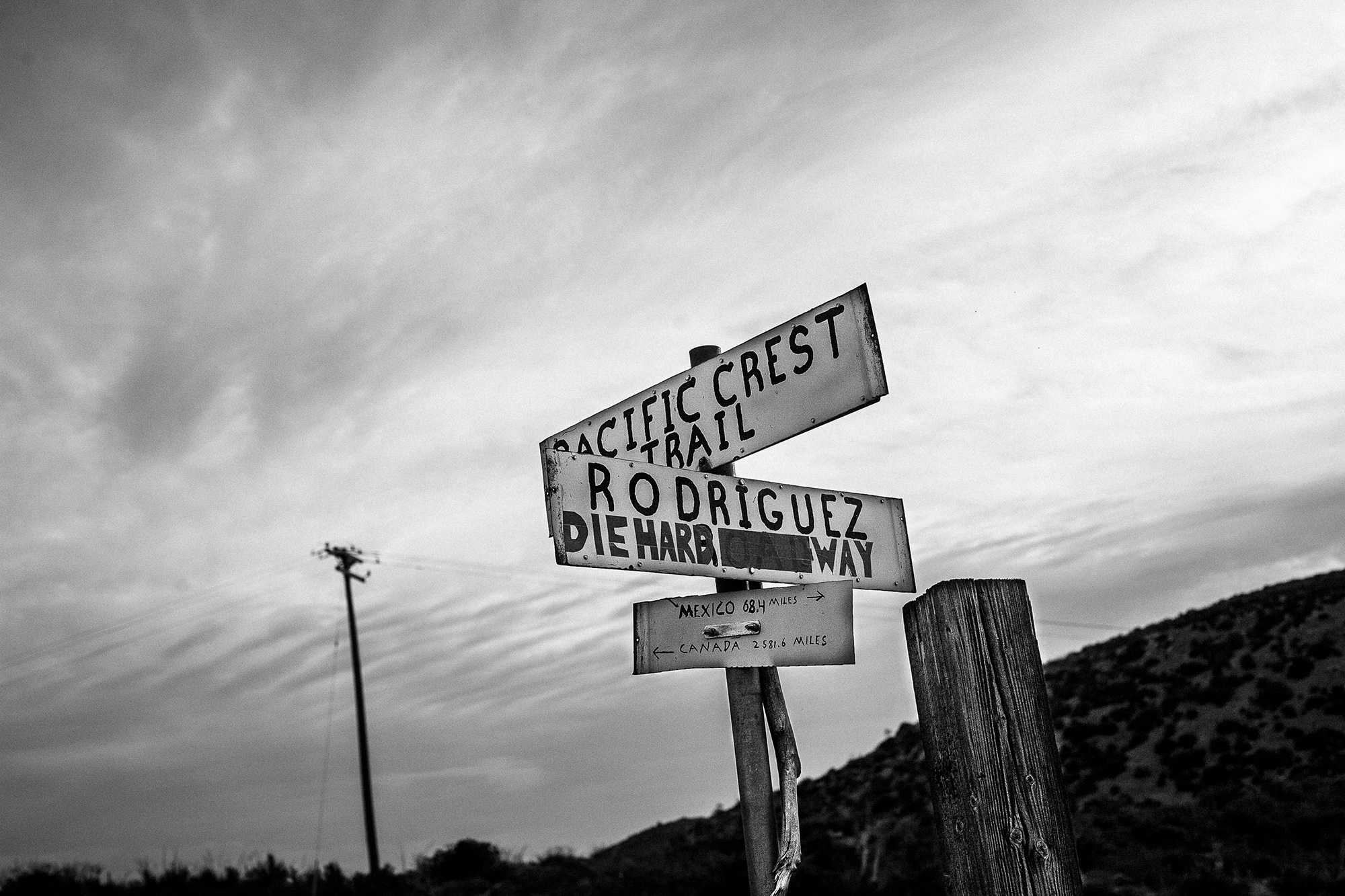 We crossed the PCT under a foreboding sky as we came down Rodriguez Canyon. A sign of things to come? Gradually, the sun popped back out slowing rising overhead. The mercury climbed in perfect step. Mountain greens started giving way to desert browns.

Turning right out of Rodriguez, we were in a deep valley. Oriflamme Mountain towered above us. A long climb up through Chariot Canyon awaited us. A sprawling metropolis of several million lay just over the ridge but it felt light years away. As I drove, I tried to imagine traveling through this area with a horse and wagon. I couldn’t do it.

I relish the desolation. The aloneness. The quiet.

We exited back onto the highway. Dave headed back west while Ollie, John and I headed east, deeper into Borrego. Flying south along the S2, small communities went by in a blur. Mobile homes. Single shacks. Who lived out here? What were they seeking? 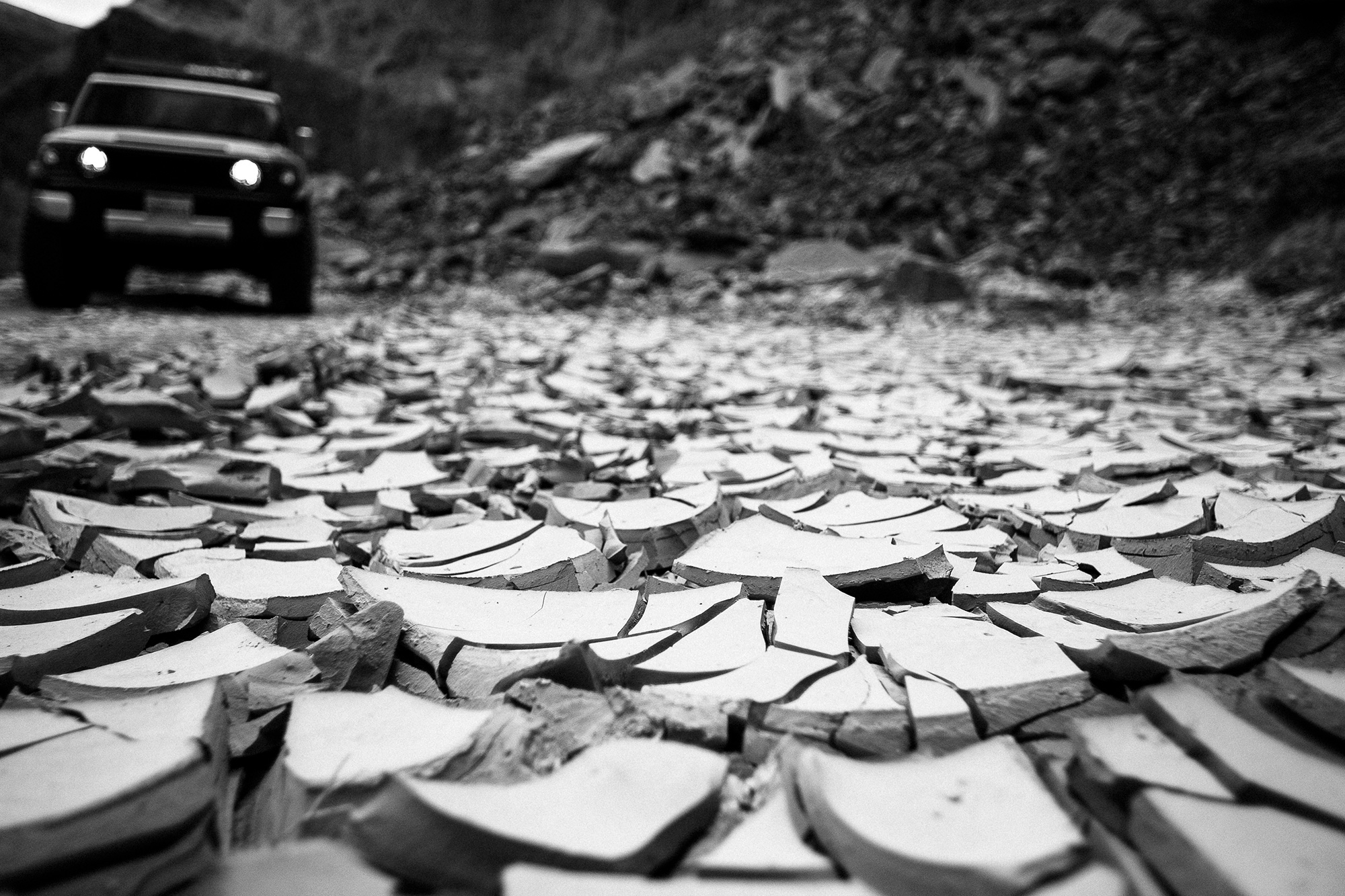 Off the S2 and back into the dirt. Canyon sin Nombre. Dark clouds hovered over the mountains to the north. The canyon’s name seemed fitting. The walls of the canyon slowly rose beside the track. The dirt became dry, cracked, parched. Huge chunks of clay lay canted at absurd angles. 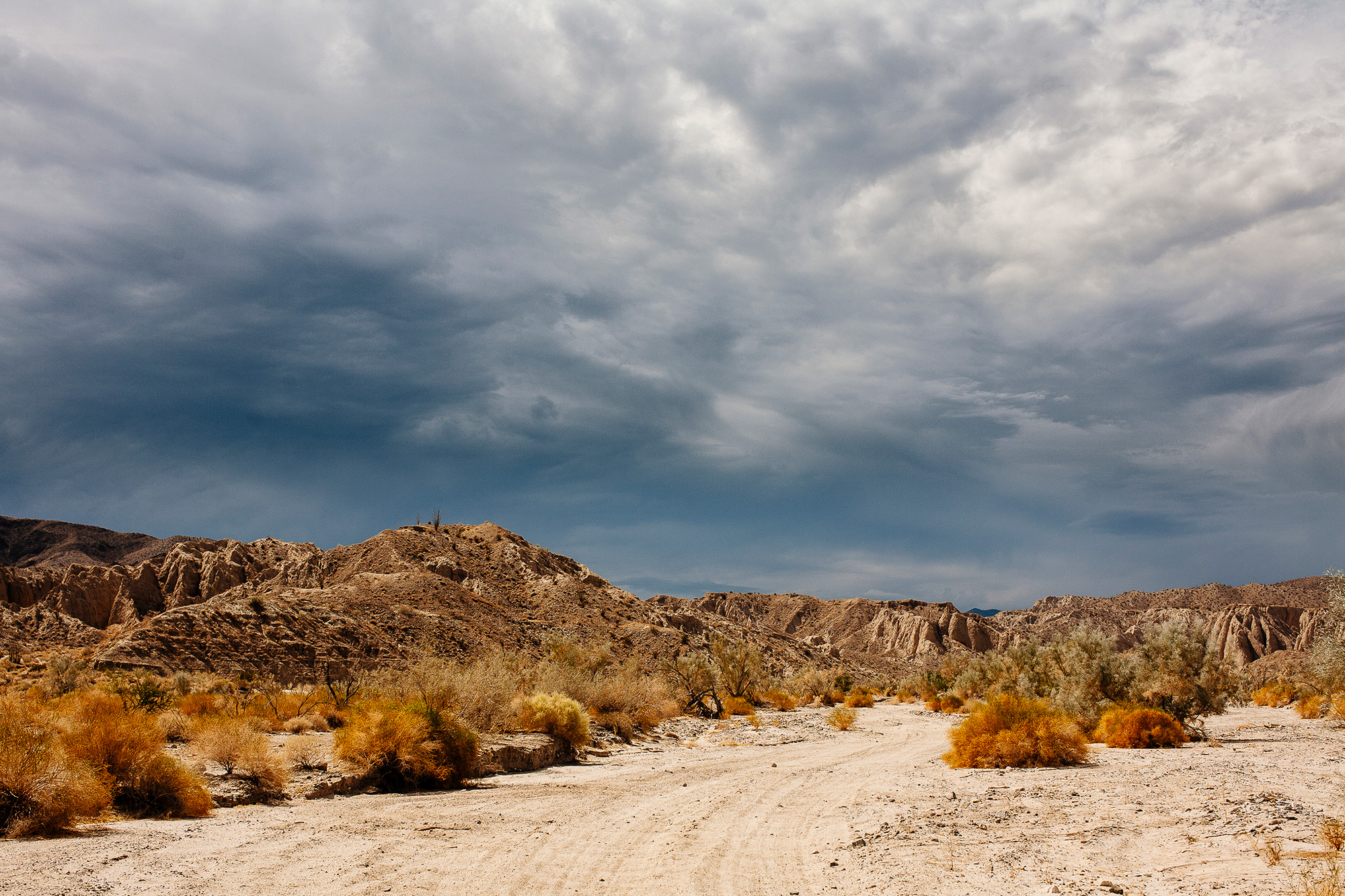 The canyon opened as we merged with Arroyo Seco del Diablo. The sand softened. Our speed increased. The truck felt as though it were floating. A slow grin spread across my face. 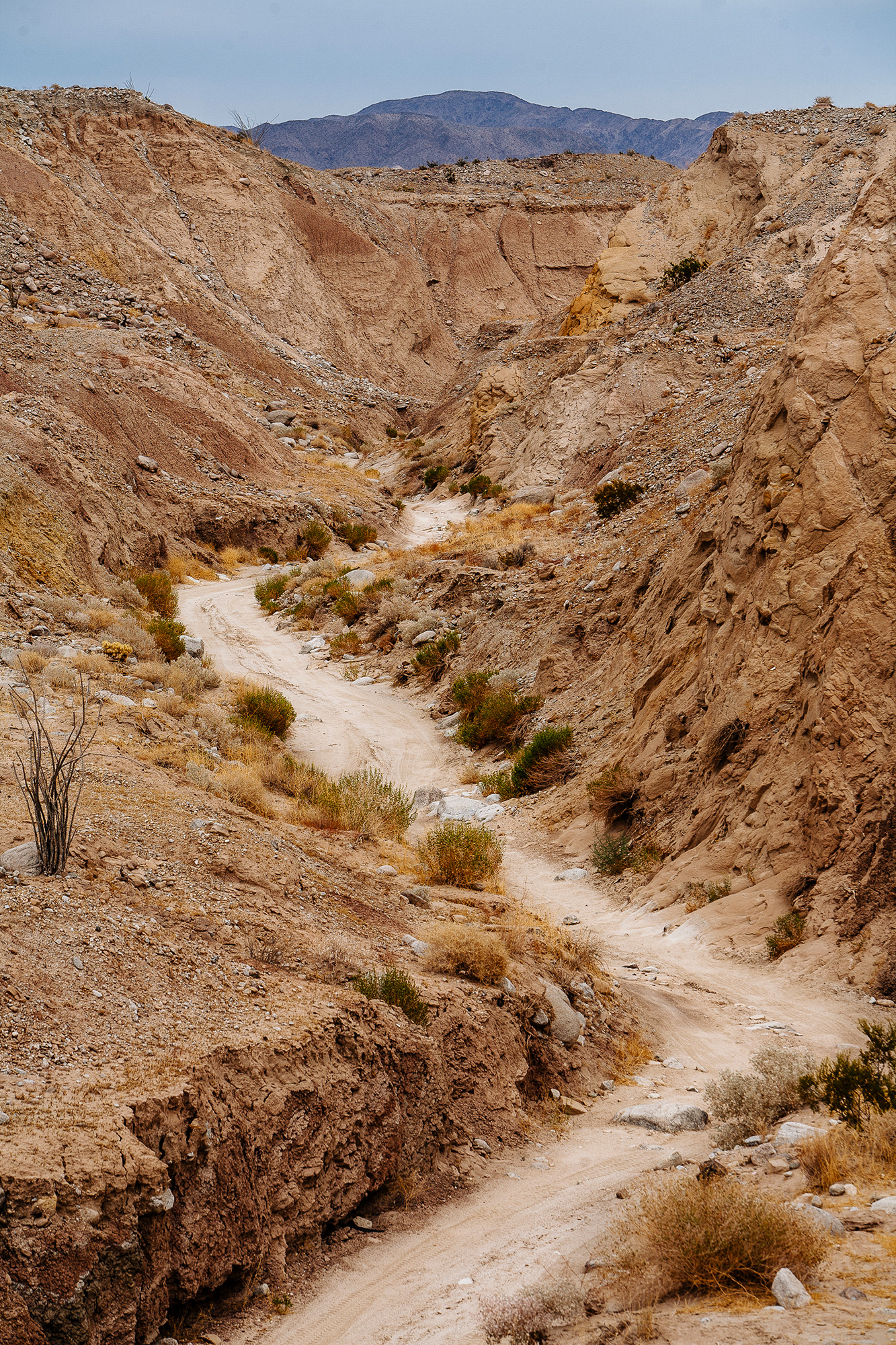 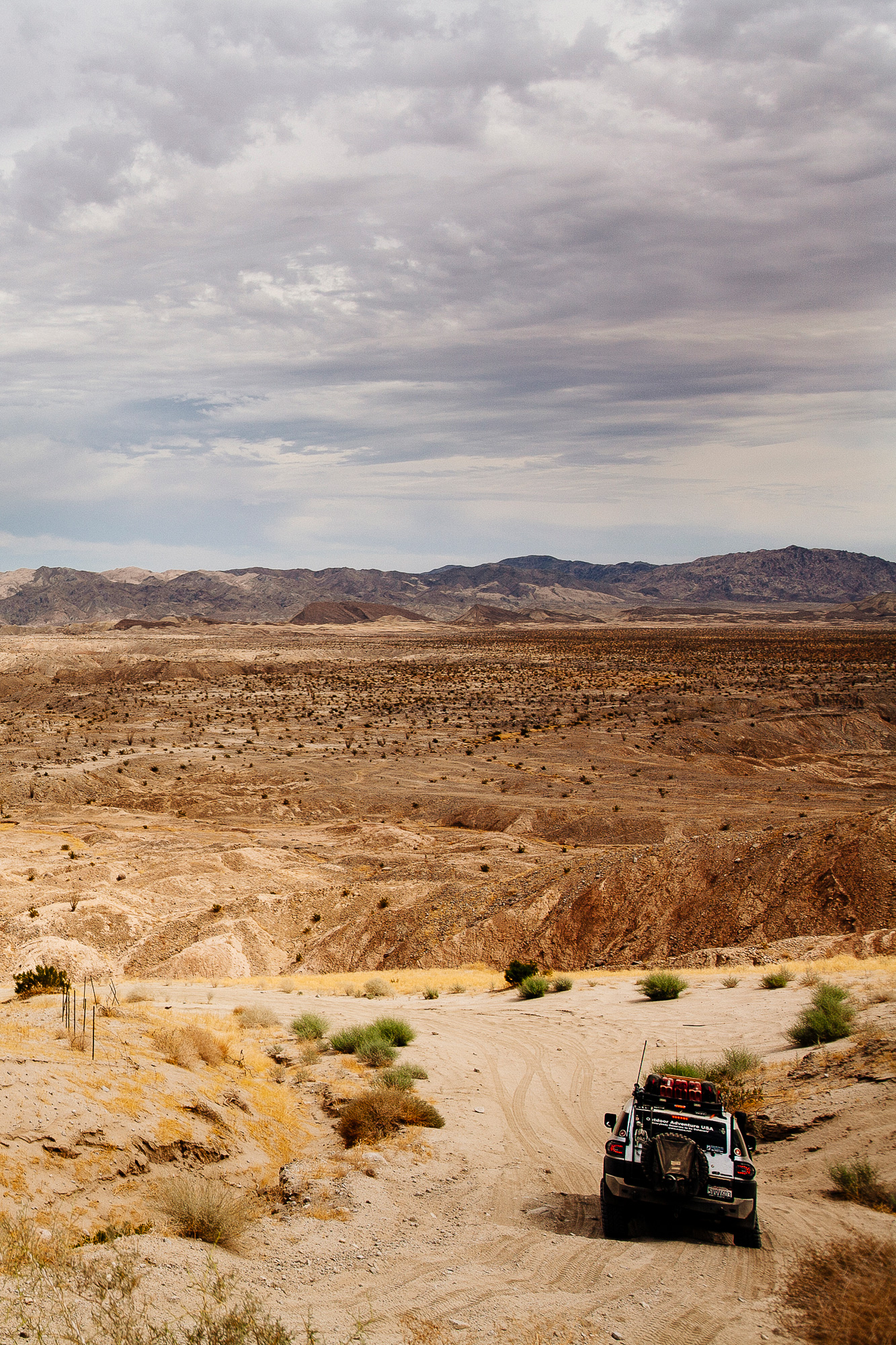 We left the arroyo and the canyon walls fell away. A vast emptiness opened up ahead of us. Nothing but desert in every direction. Small mountains dotted the horizon to the east. All that could be heard was the dry breeze. Below us the Diablo Drop-off lead us into Fish Creek.

Once out into the wash, there was more than a gentle push on the go peddle. Dirt rooster tails sprung out behind the trucks. The familiar rush of dopamine spread through my head. Had I made a mistake by not setting up the truck for high speed desert running? No. Maybe. I couldn’t decide but I was giggling and grinning from ear to ear. 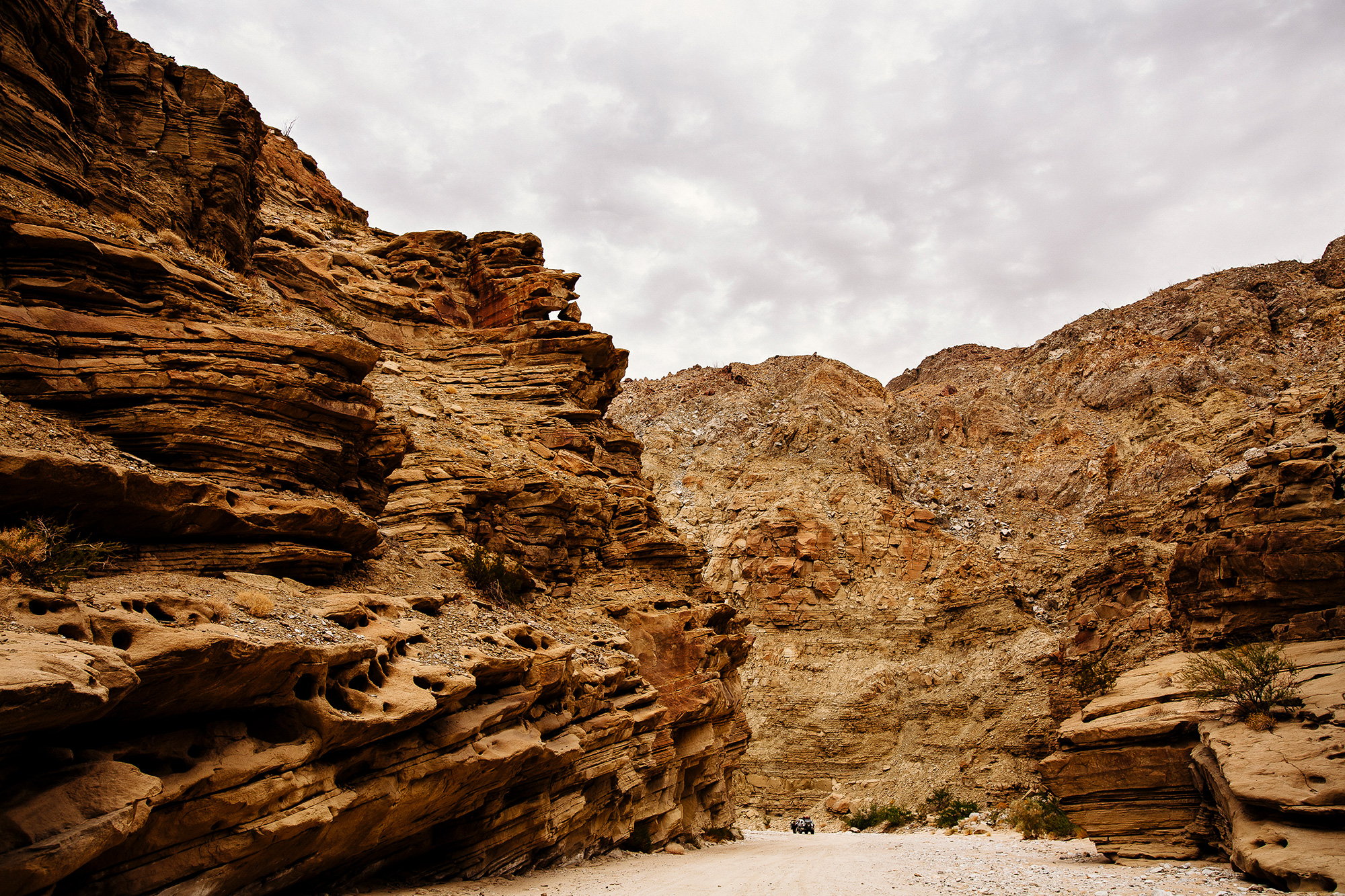 Soon we entered another canyon. The walls were so high the sun disappeared and everything fell into shadow. The rock in the walls was compressed and twisted into shapes I didn’t know were possible. Eons of extreme pressures. Geologic time reminds me of how small we really are. 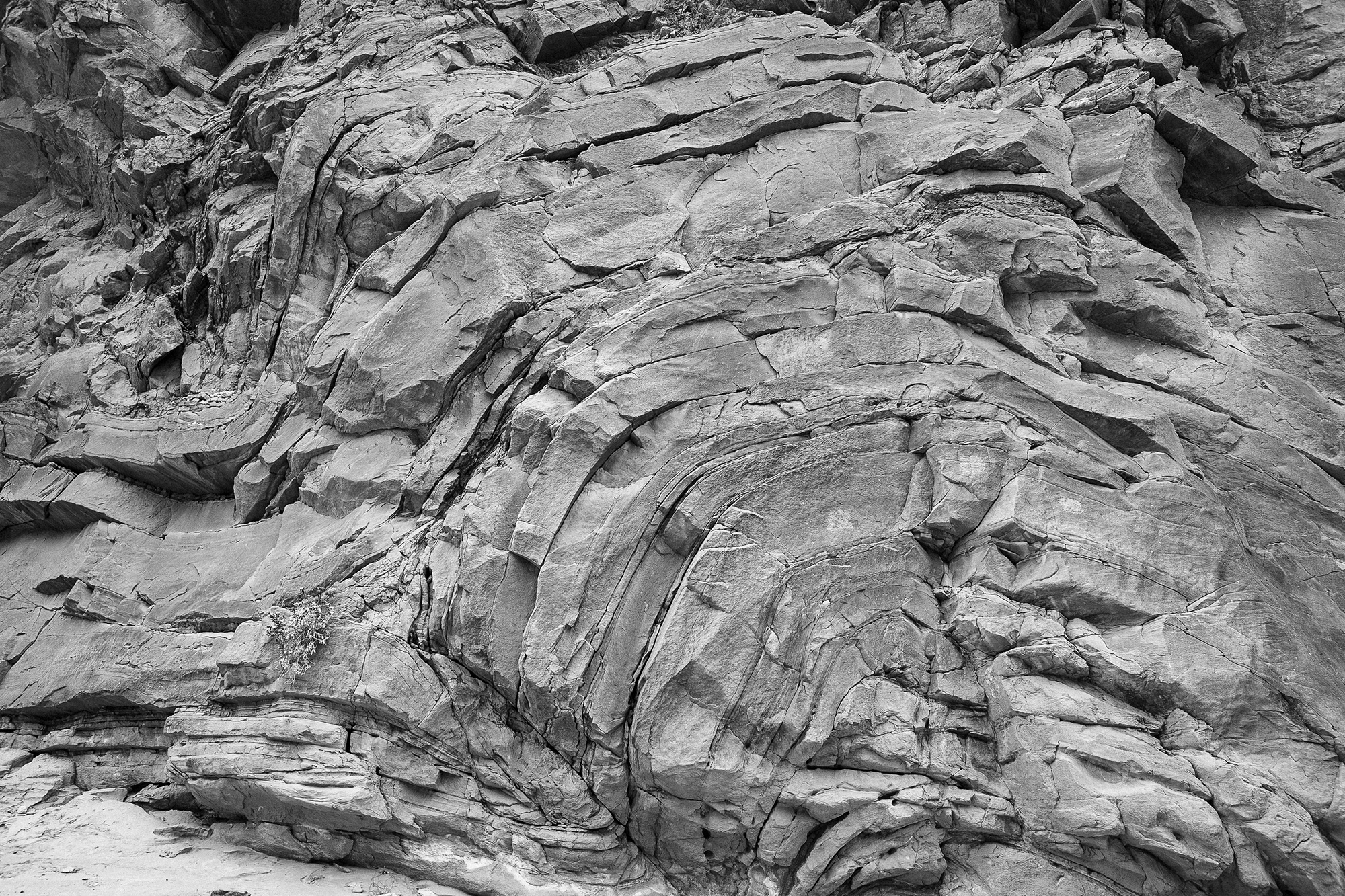 Another wash. Heading south, racing along the edge of the Fish Creek Mountains. Deeper into the desert. How far east were we? Superstition Mountain was out there somewhere. 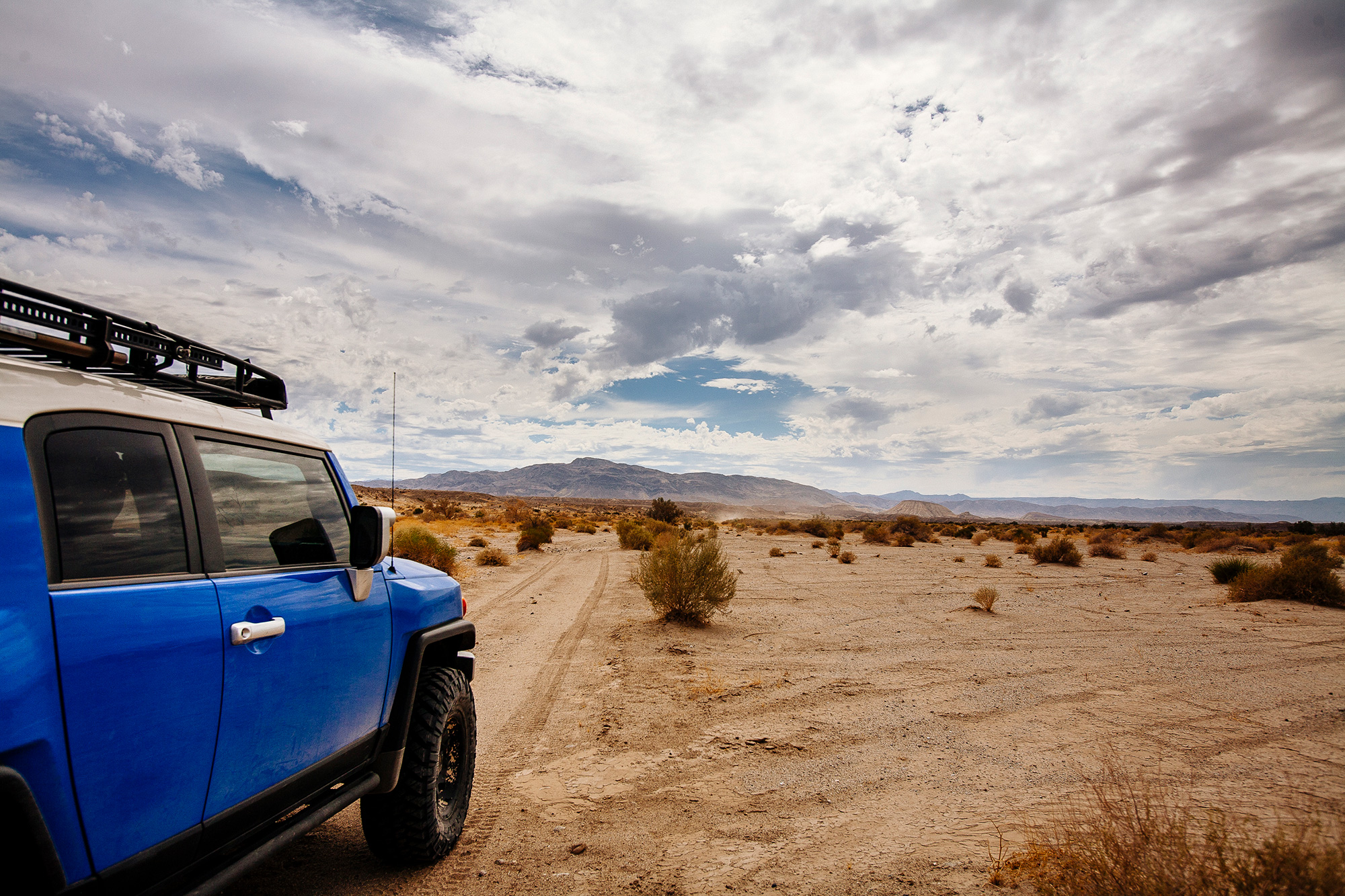 We followed the railroad tracks. Passed under a trestle and down into another wash. We paused and jumped out of the trucks for a stretch. Not a sound. Just nothingness. I didn’t know such a desolate place existed within San Diego County. I could of stood there for hours, not moving, just soaking it in. 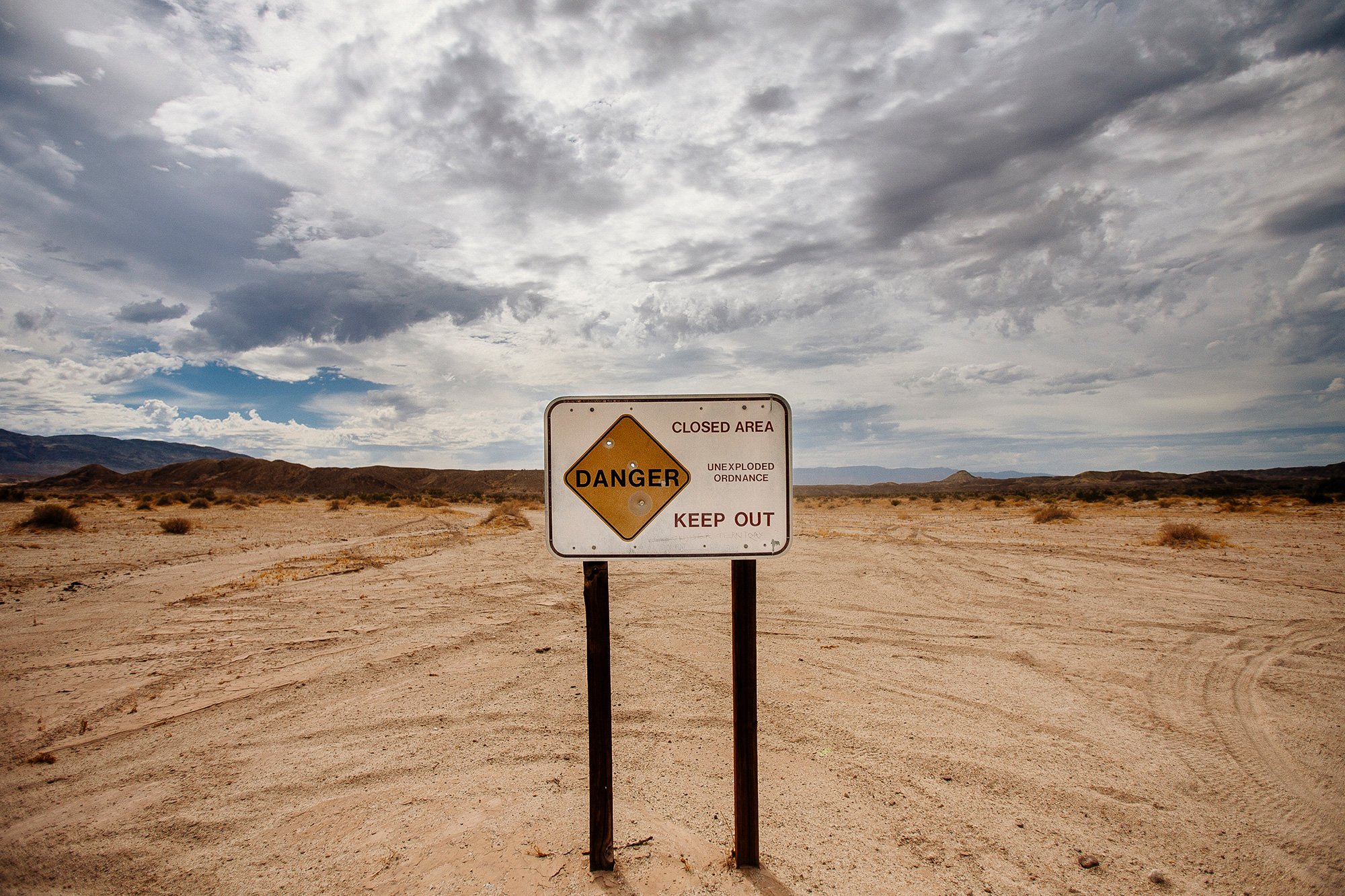 We followed the wash, missed a turn and abruptly stopped at a sign. No trespassing. Unexploded ordinance. We were at the edge of the Carrizo Impact Area. Wait. What? 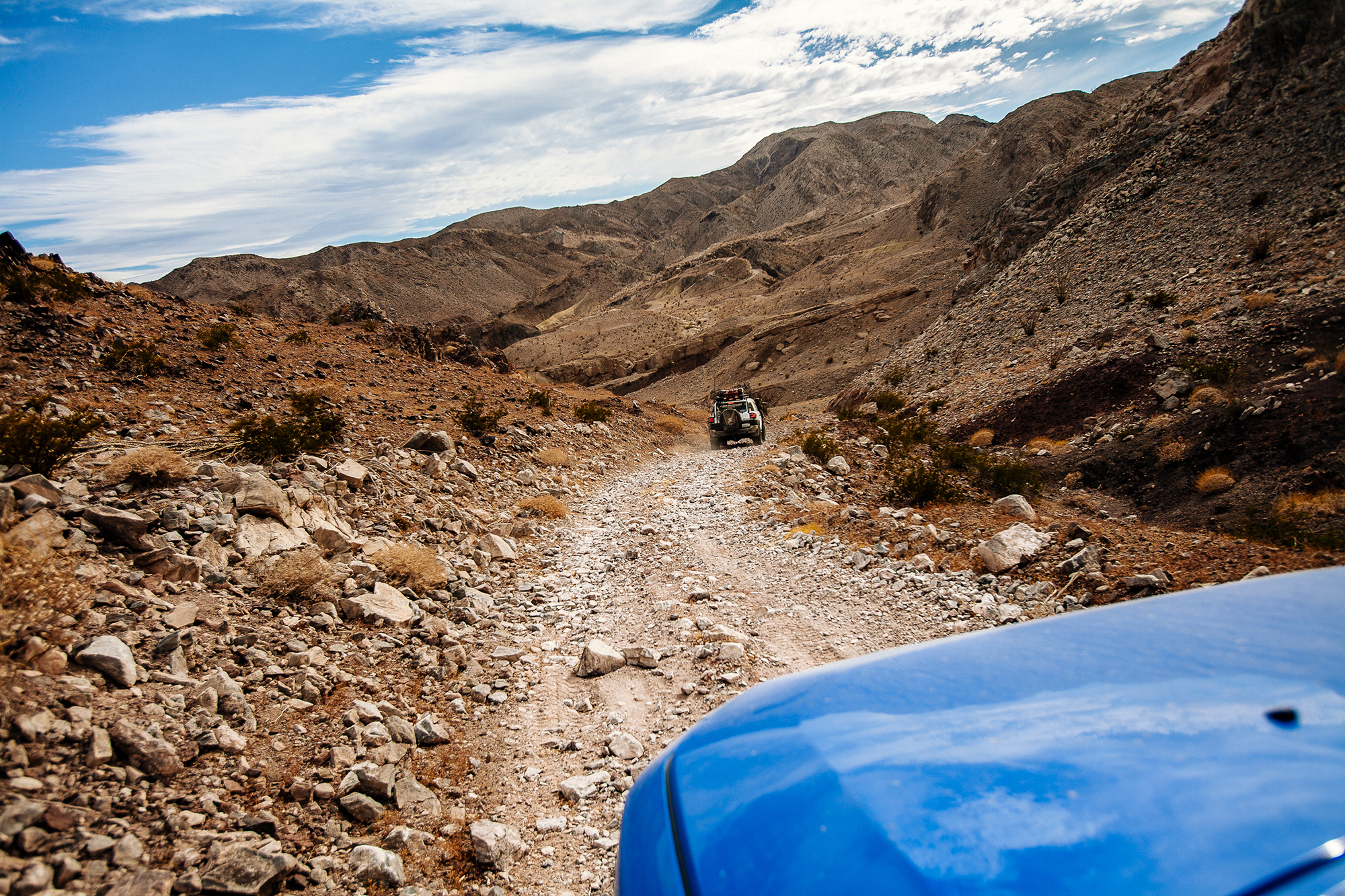 The right track appeared and we were heading south again. Plaster City was to the east by just a few miles. We turned west onto Painted Gorge. The climb up Carrizo Mountain began. 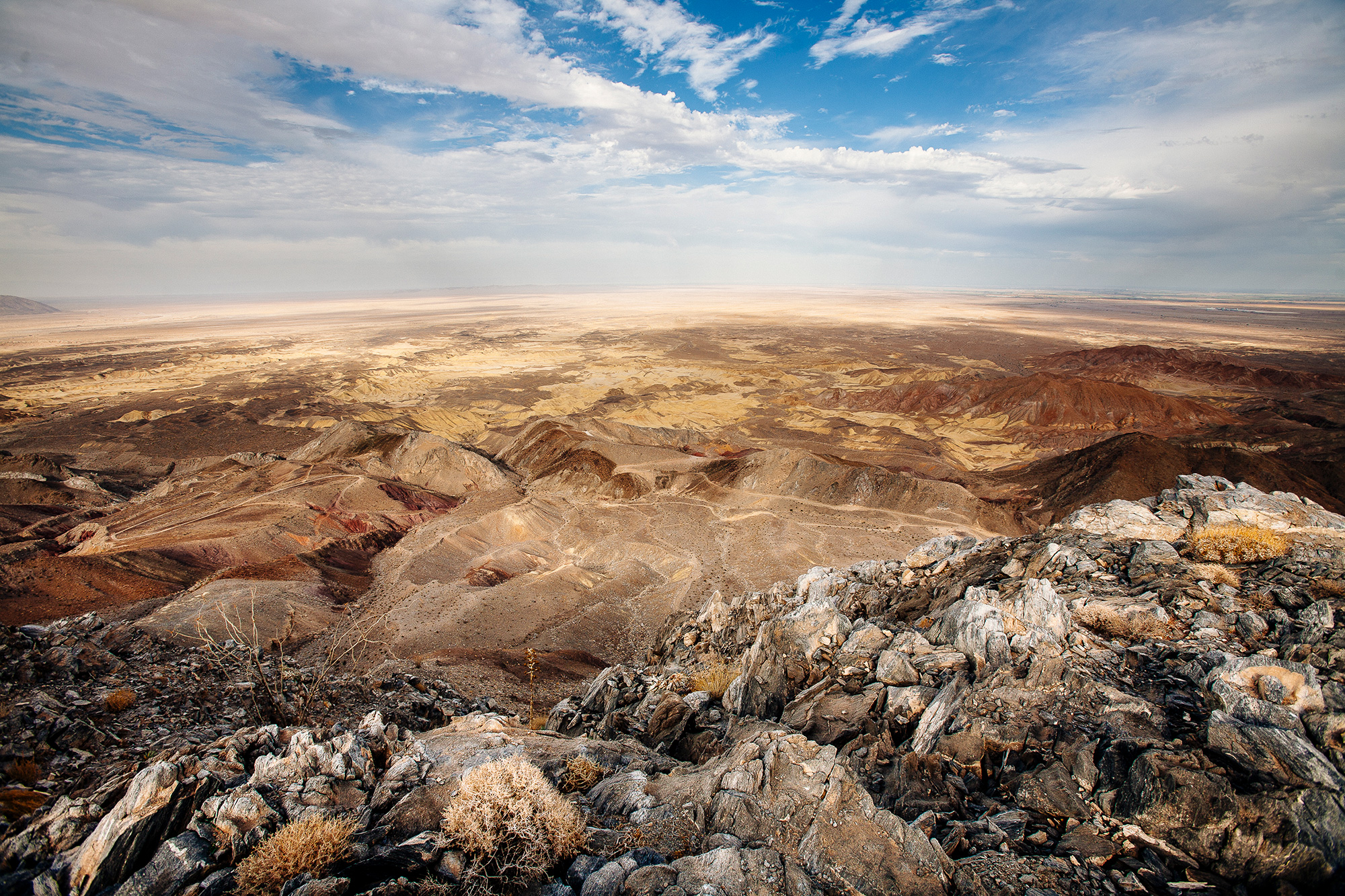 The top is at 2400 feet. Small, just a bump in the road, compared to what I am now used to here in Colorado but, the views from the top are no less impressive. Empty desert stretched to every horizon. Somewhere to the south was the black ribbon of I-8 but from up here it was invisible. Star gazing from up here would be on an epic scale.

I covered close to 250 miles that day. I was totally hooked. How soon could I get back? The wait wasn’t that long at all. 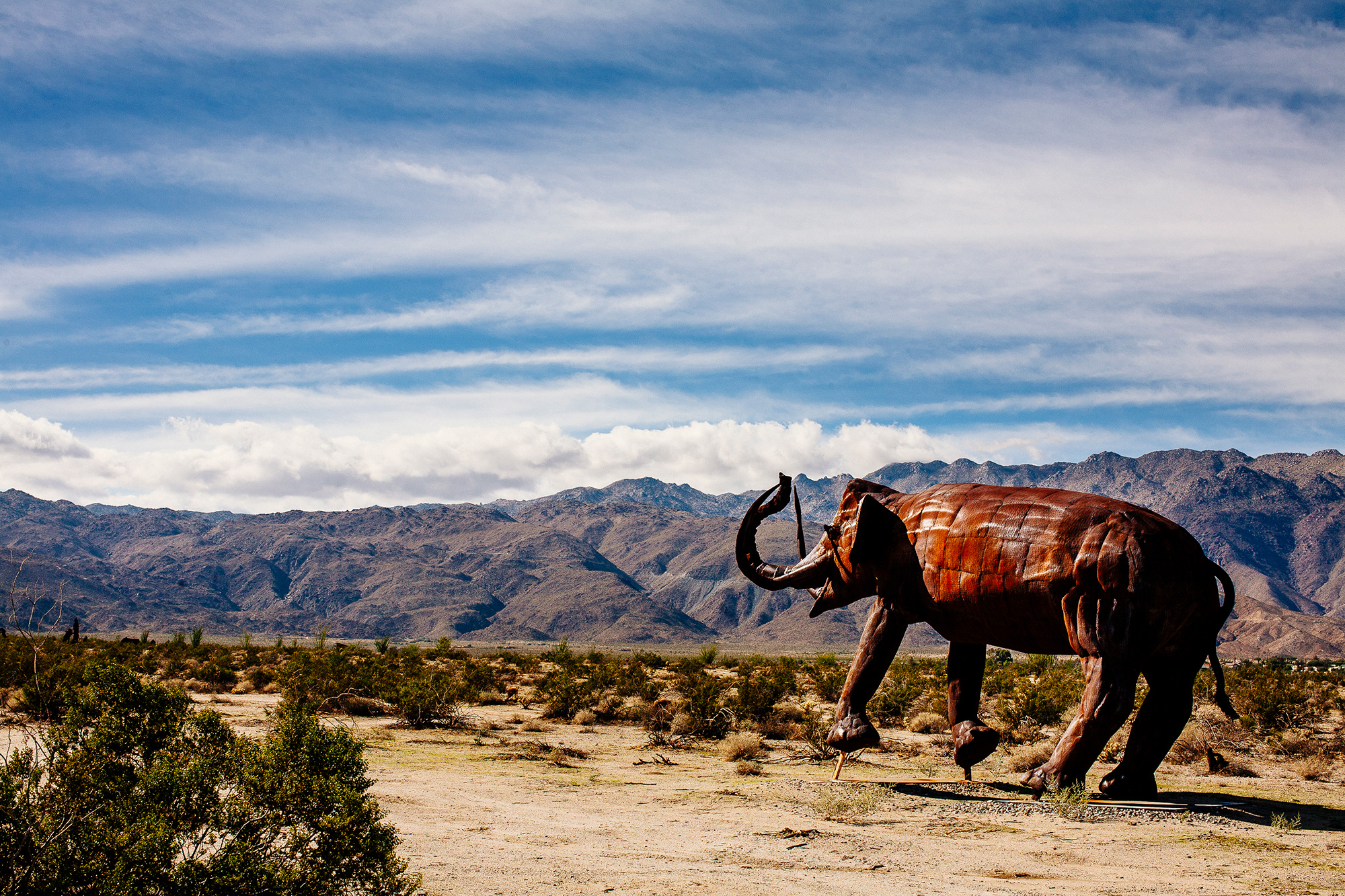 The next trip was a family weekend. A drive on the desert tracks near town to find all of the art installations. Impressive, monumental sculptures that could barely be seen from the road. Dragons rising out of the sand. Giant eagles swooping low. The girls loved them. A short hike up Palm Canyon. Memories for me. Moments passed to my daughters. Camping under the stars. Counting meteors. Small bodies slowly becoming heavy. 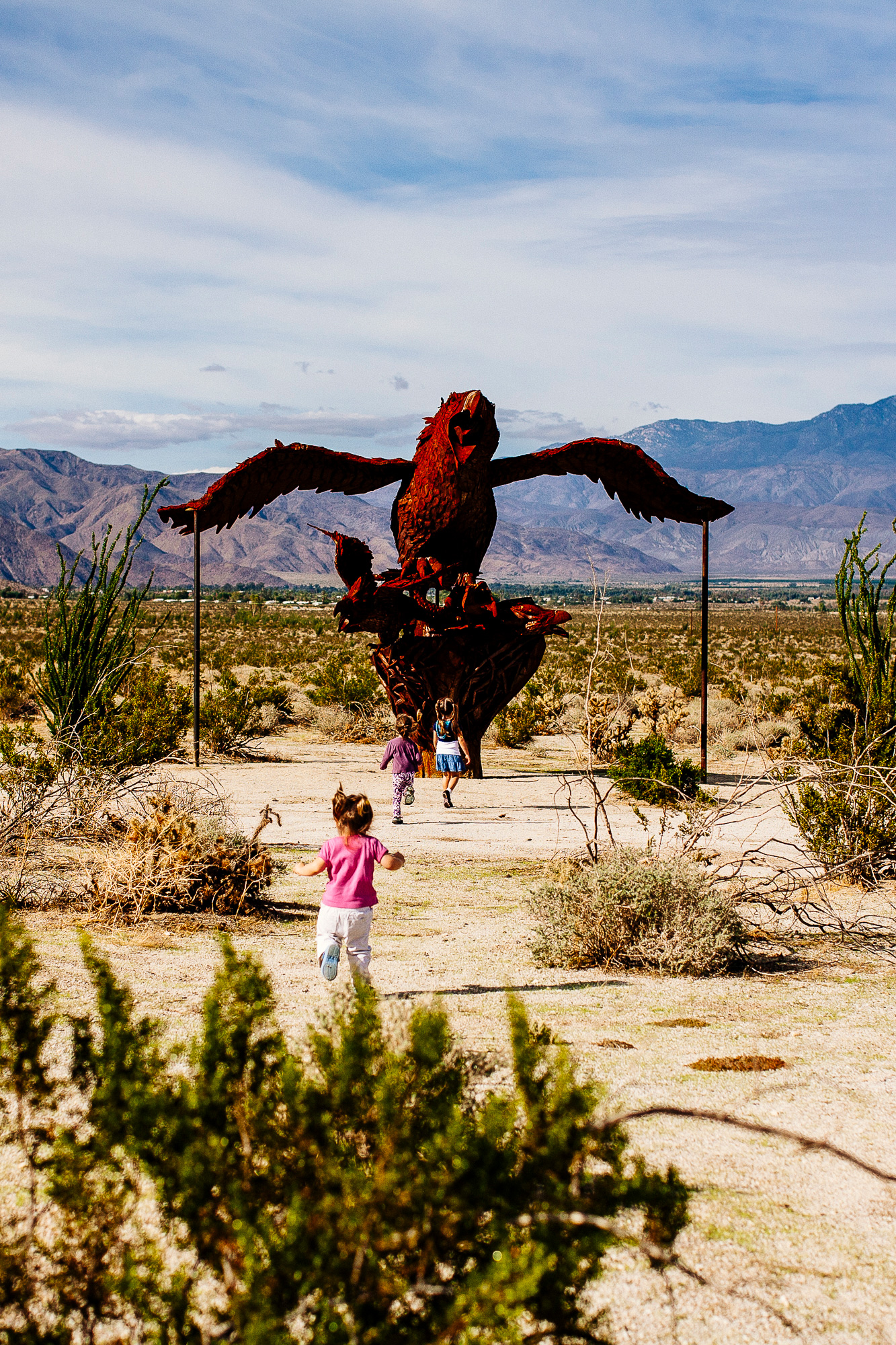 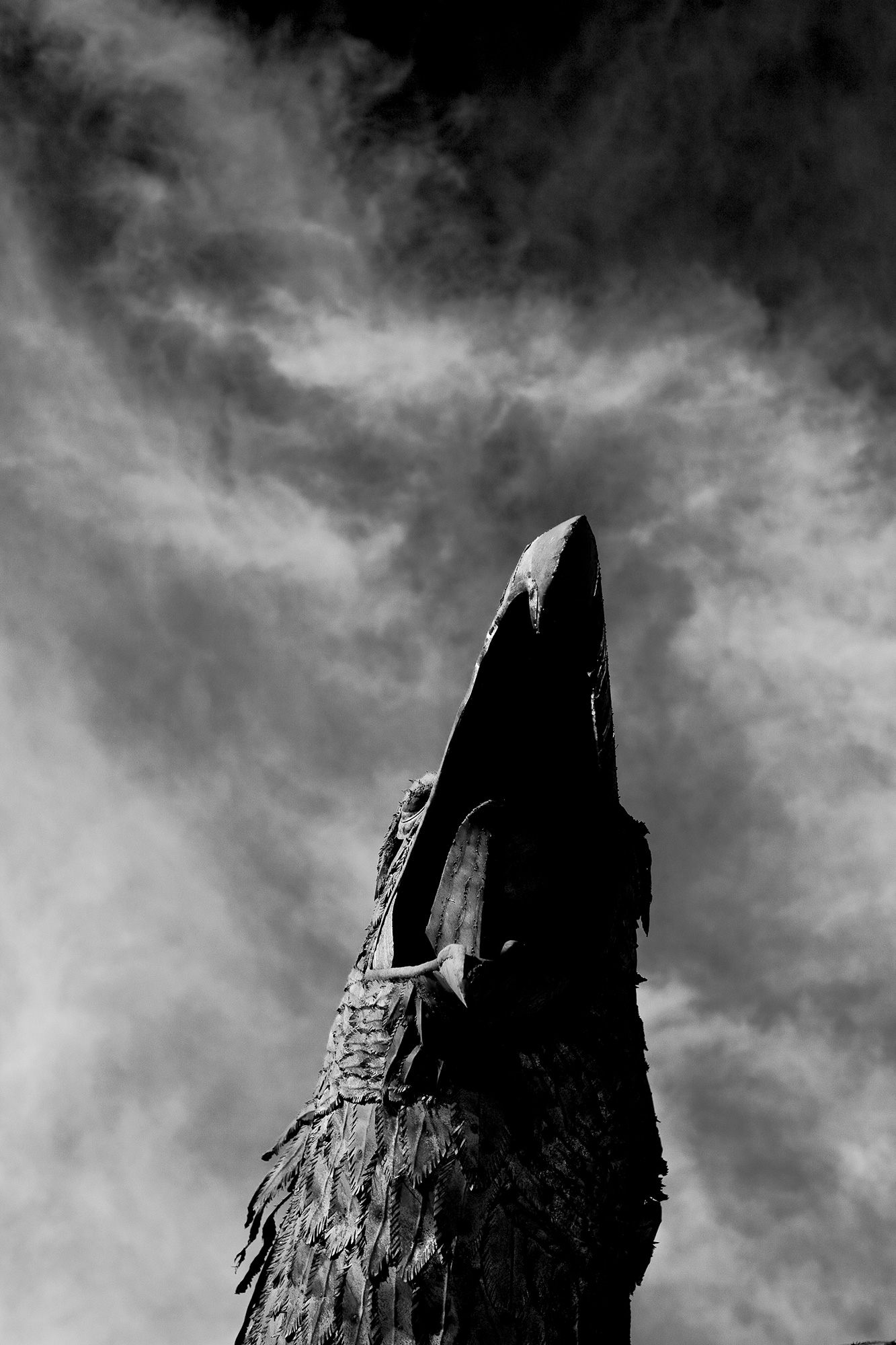 After that was craziness. The next trip was shorter but far more technical. Narrow gaps, massive rock gardens, steep grades.

Early one morning, I met my friend Wes and a few others at Butterfield Ranch. We headed up the S2 and dove into the dirt onto Pinyon Mountain Road. The radio squawked, “Are you ready for the Squeeze?” That didn’t sound good and my nerves jumped a bit. 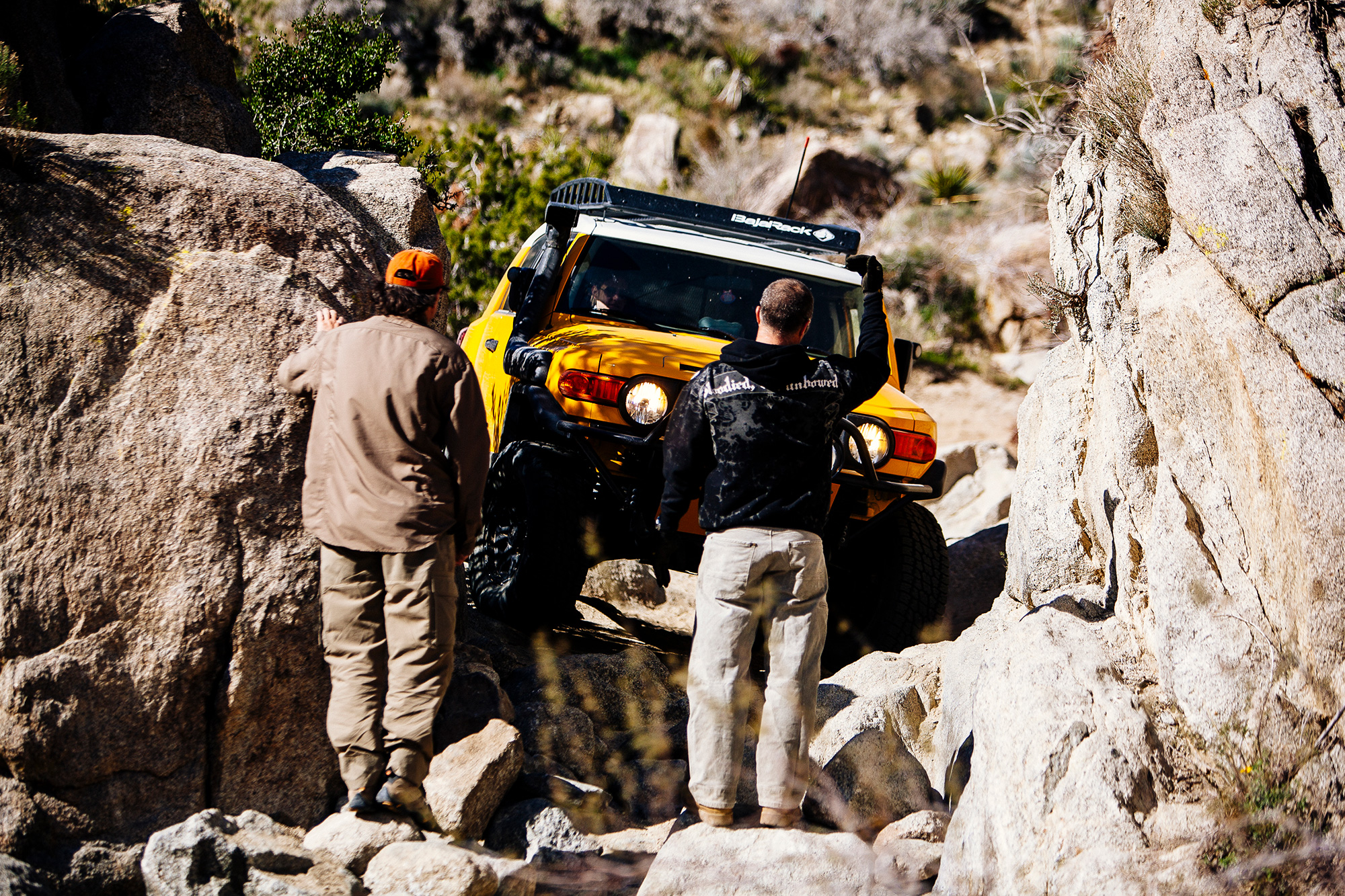 The Squeeze is a mile or two down the road. It’s a slot in the rocks. A narrow slot. My first reaction was that in no way would a FJ fit. Wes, whose overflowing confidence would swoop you up and carry you along, said not too worry. I didn’t. The FJs fit with barely inches on either side.

After the Squeeze was an incredible steep drop-off. Much larger consequences than the Diablo Drop-off to the south of us. The trucks teetered, canting at angles that didn’t feel or look right. The feeling of lightness at the rear end was unsettling and didn’t fade until reaching the bottom. 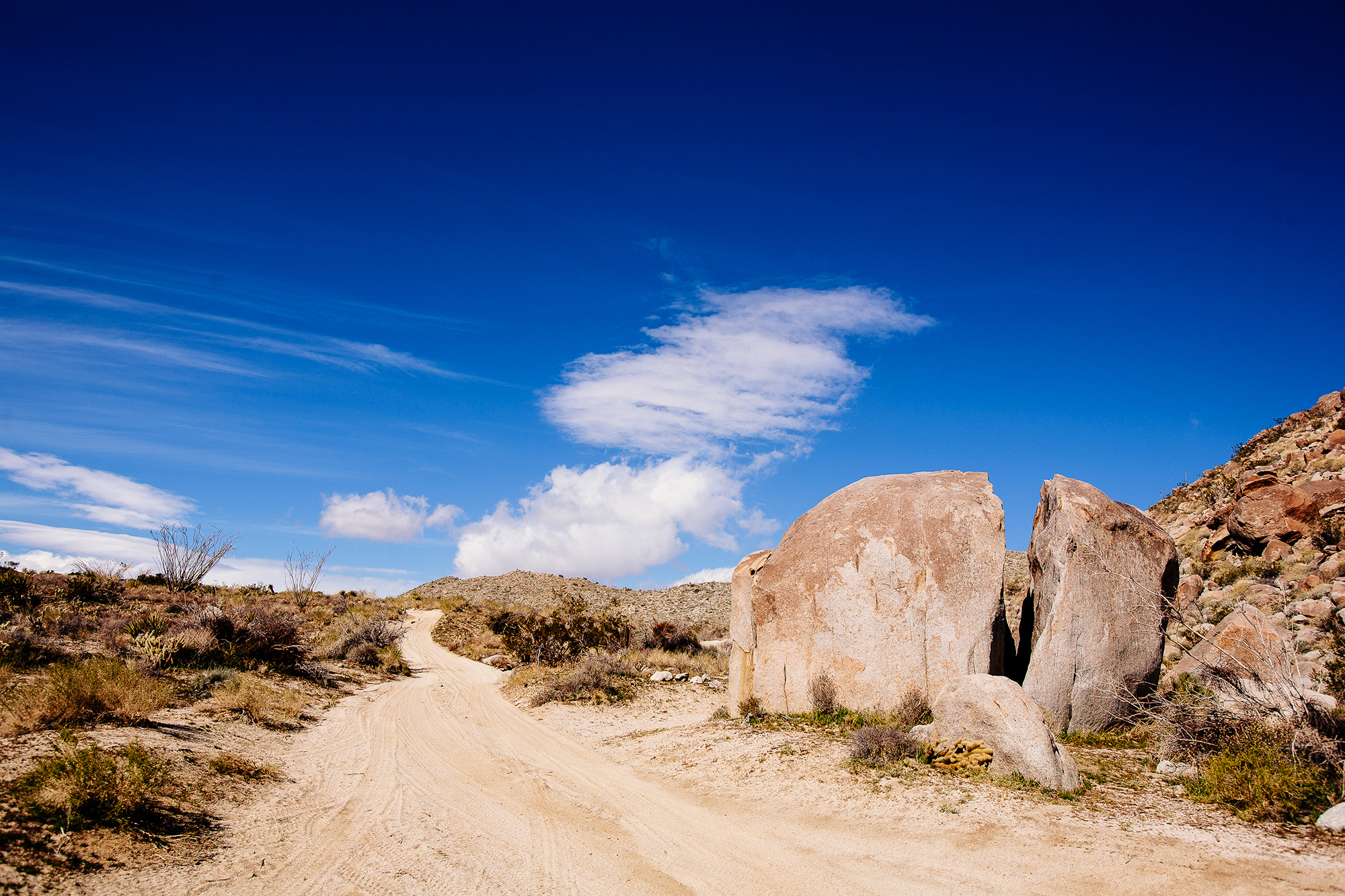 There was another high speed section through the wash up to Split Rock. Quick lunch stop then back floating through the wash. We were flying. Trying to keep up with Wes was an exercise in futility as his FJ was fitted with a much more supple long travel suspension. Friendly taunts floated over the CB. 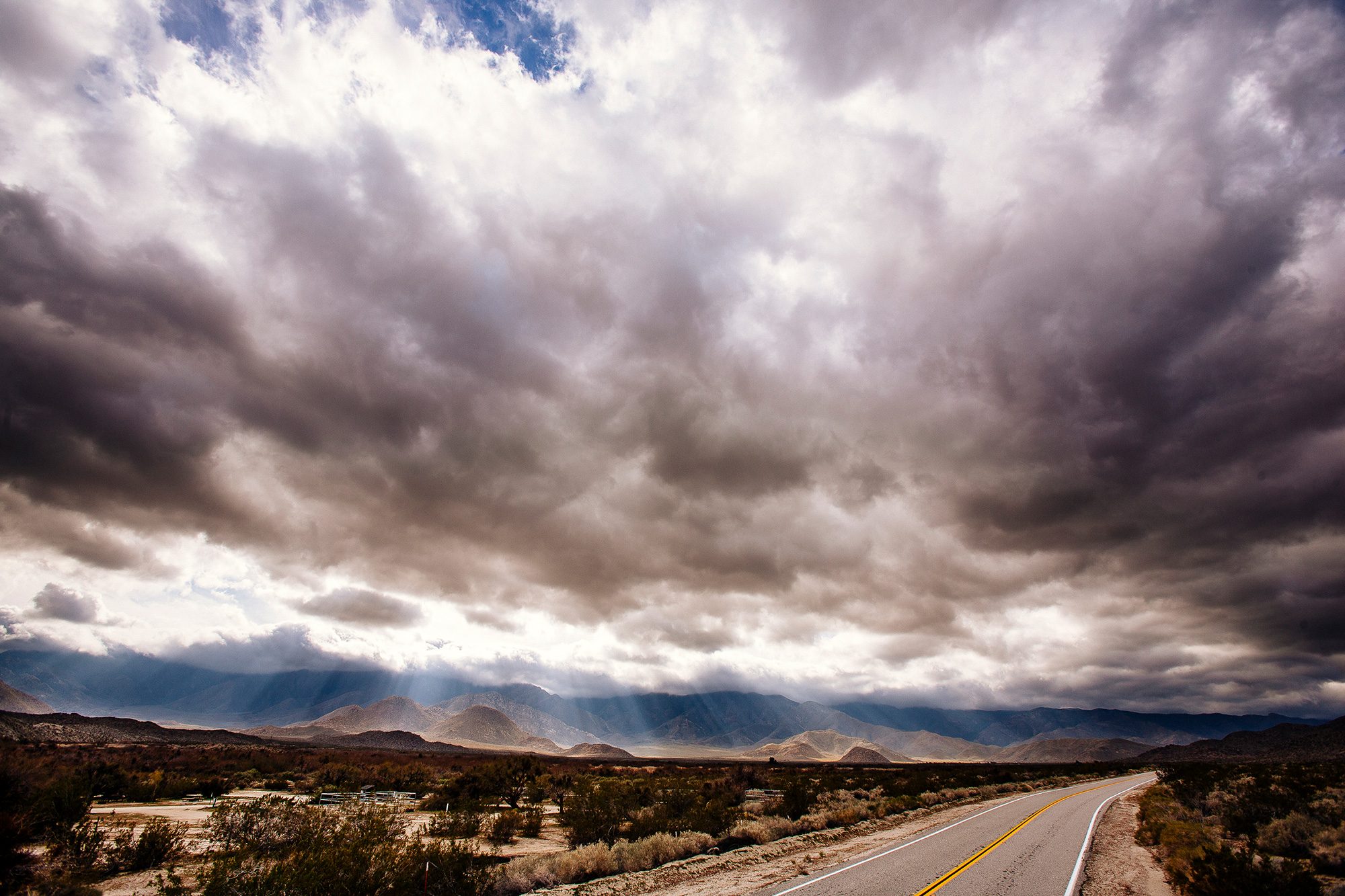 Up the Diablo Drop-off, back out through Canyon sin Nombre, onto the highway and homeward bound. Desert dust in every crevice of the truck and myself.

The next trip out was again with Wes and it would be last before moving to Colorado. 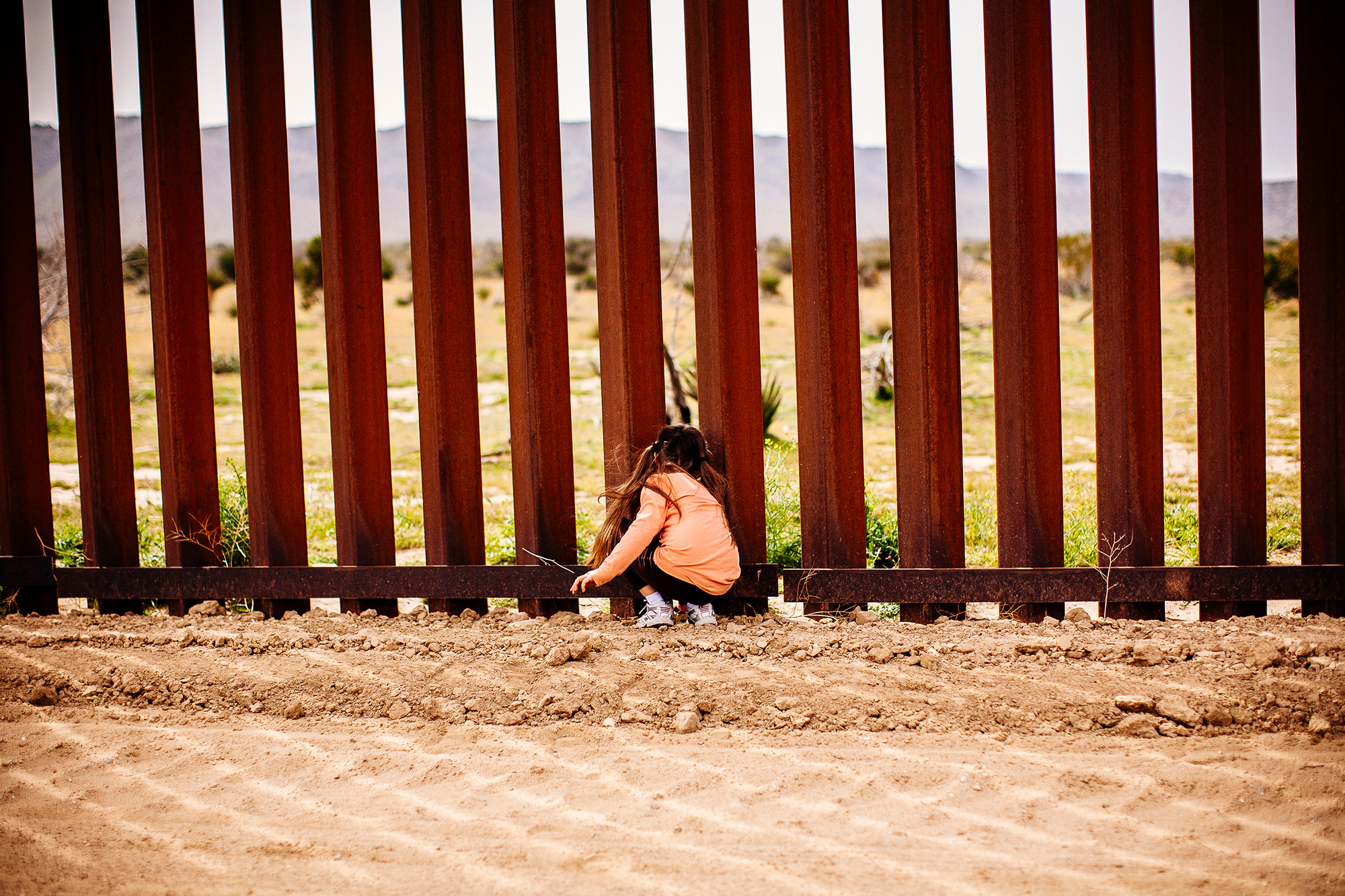 We started out on the south side of I-8, near Jacumba, and ran along the fence line for a bit. A brief stop so Dillen could jump out and touch Mexico. Two Border Patrol jeeps appeared out of thin air. We chatted a bit then headed back out. 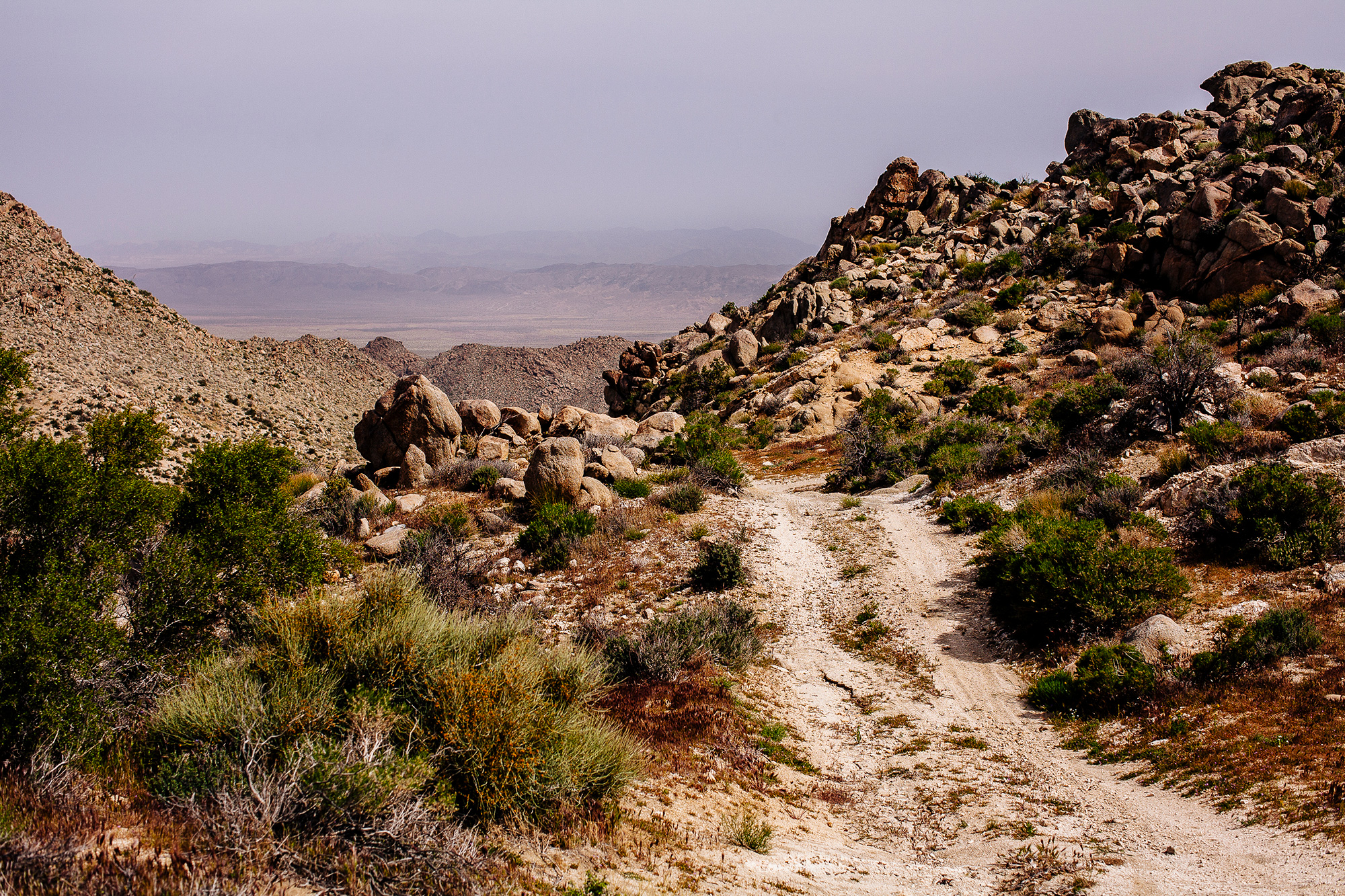 Wes led a loop through the In-Ko-Pah Mountains. I hadn’t been over here and didn’t realize the roads were on the map of the Borrego area that I had. Wes didn’t have a map. He had made the track using Google Earth. 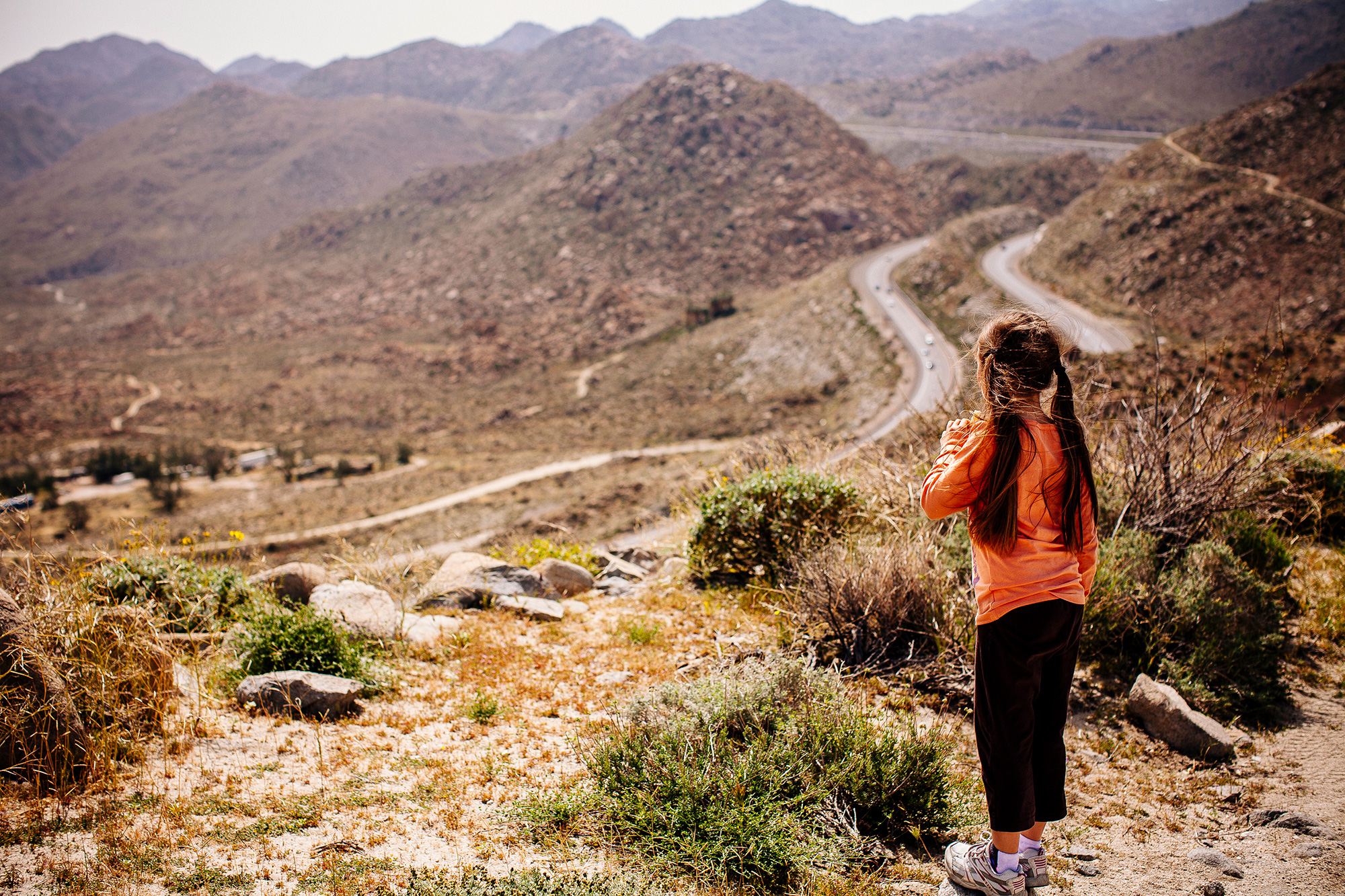 We stopped at the top of a ridge. There was a juxtaposition that I loved while being out here. Complete and utter isolation with brief glimpses into the craziness of Southern California. Unless you had been out there, knew what existed just over those mountains along the freeway, it was a one way view. You would whiz by in your air conditioned cocoon oblivious to the vast open space and adventures just over the ridge. 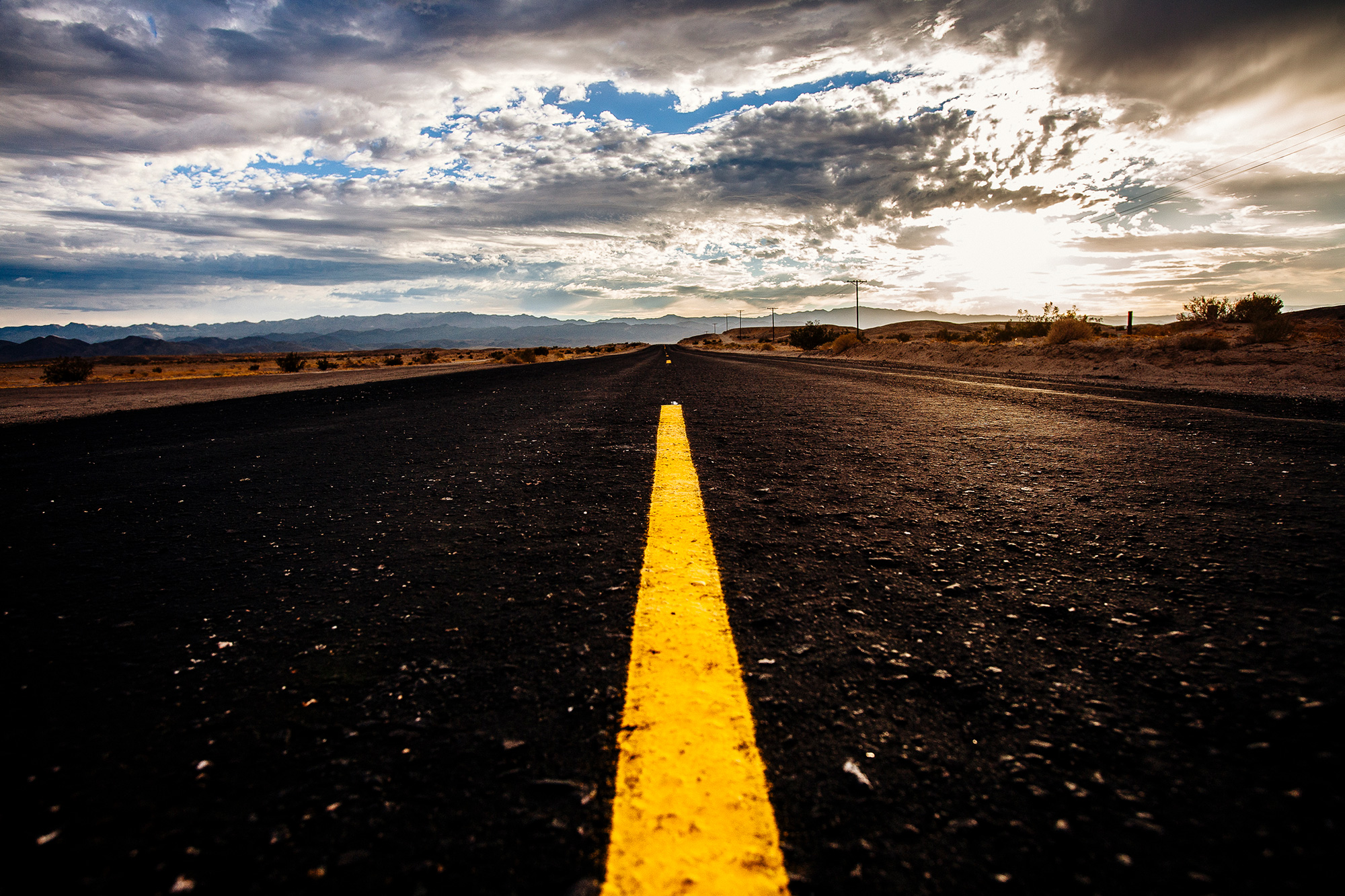 The Anza-Borrego Desert State Park is about 2 hours east of San Diego. Leaving the coast, you climb up into the Cuyamaca Mountains and pass through the small town of Julian. Once over the top, you begin the long descent down to the desert floor. The changes in landscape are nothing short of amazing.

It is the second largest state park in the US at just over 650,000 acres. From the San Diego County line in the north, it stretches all the way south to the US-Mexico border. The Cuyamaca Mountains are on its western side and the Salton Sea is the eastern edge. The park is full of history. Ancient history. From dinosaurs to Indians. A Spanish explorer seeking a route to San Francisco. The Butterfield Overland Mail Trail. Hidden gems that take some exploring to find. The southern end of the Pacific Crest Trail is also in the park.

S
sean-slavin
I am a photographer, a family man with three daughters and I have a need for adventure (since birth). I enjoy the outdoors, have some tattoos and shoo...
An error occured.