Rumors of a hard-shelled Eezi-Awn had been crossing my desk for months when the confirmation hit my inbox, in the form of an ad request and a photo of the new tent. Pictured was a thing of beauty—a sleek, wingless fighter jet hovering over a snowy landscape—but we all know photos on the internet are only half of the story. As fate would have it, Paul May of Equipt was driving right past a photoshoot I was on in the Mojave Desert, so I arranged for us to meet up in camp to check out the Stealth personally.

Full disclosure: yes, Equipt is one of my studio’s clients. If you know me, then you know that’s the strongest endorsement I can give—I’ll only work with businesses I believe in.

Flipping open four latches releases the lid of the matte black shell, which is raised and lowered easily by one person thanks to the aid of gas struts and conveniently placed handles. The golden light of dawn gleams and sparkles off the metal of massive scissor-lift hinges as the roof rises, stark contrast against the darkness of the Stealth’s chassis. This new tent makes an impression, towering nearly five feet above the roof rack once open. 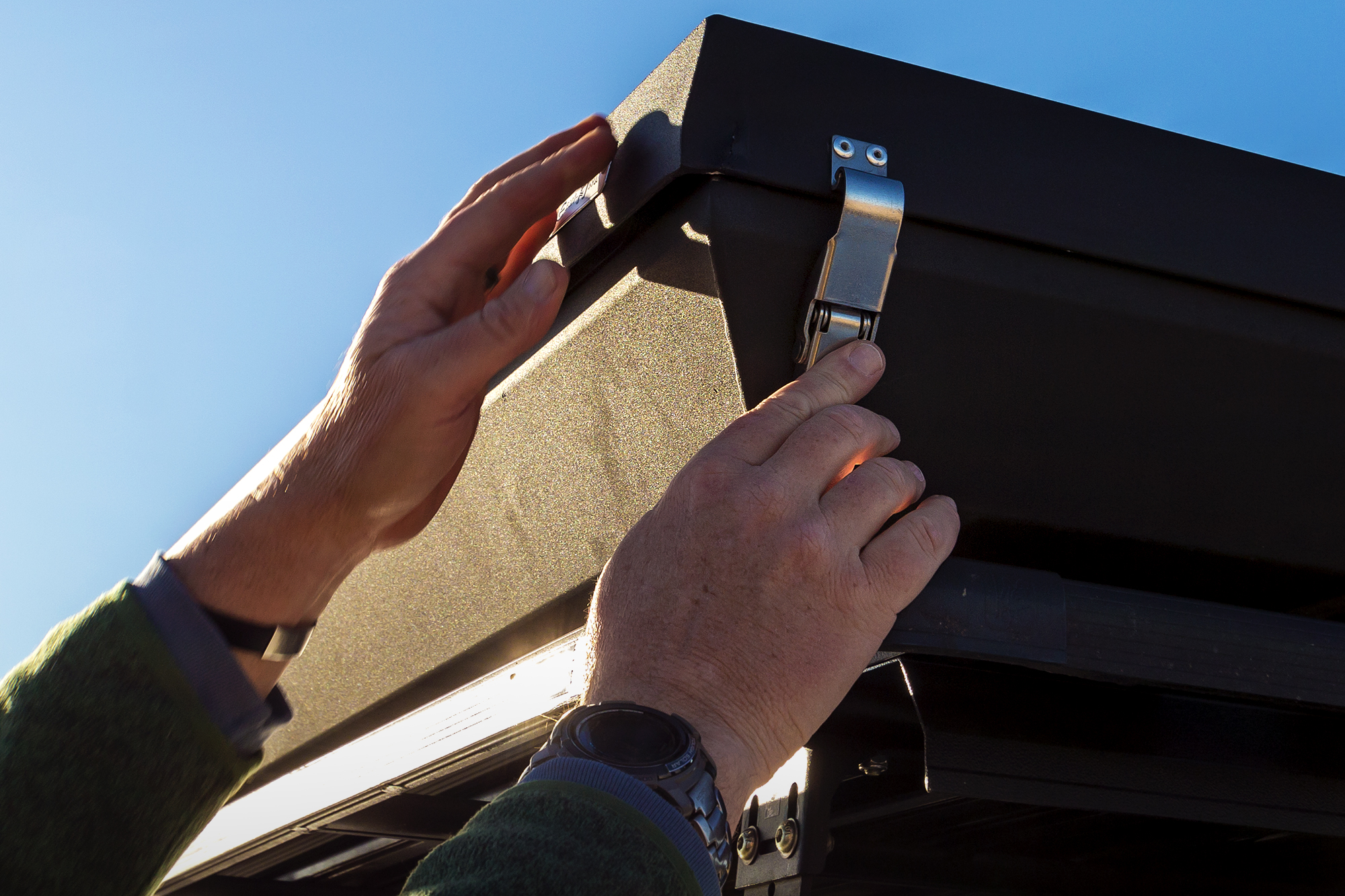 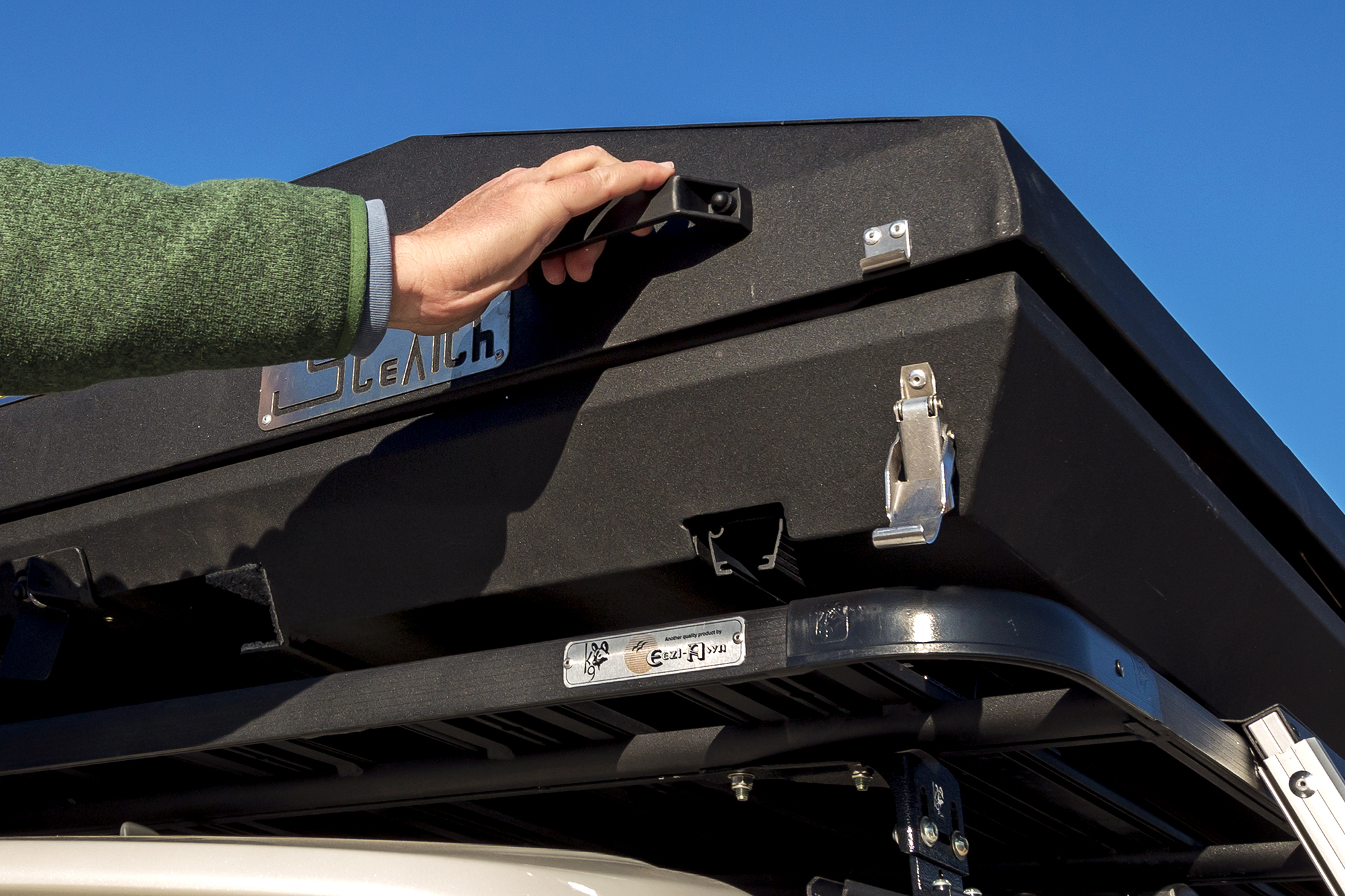 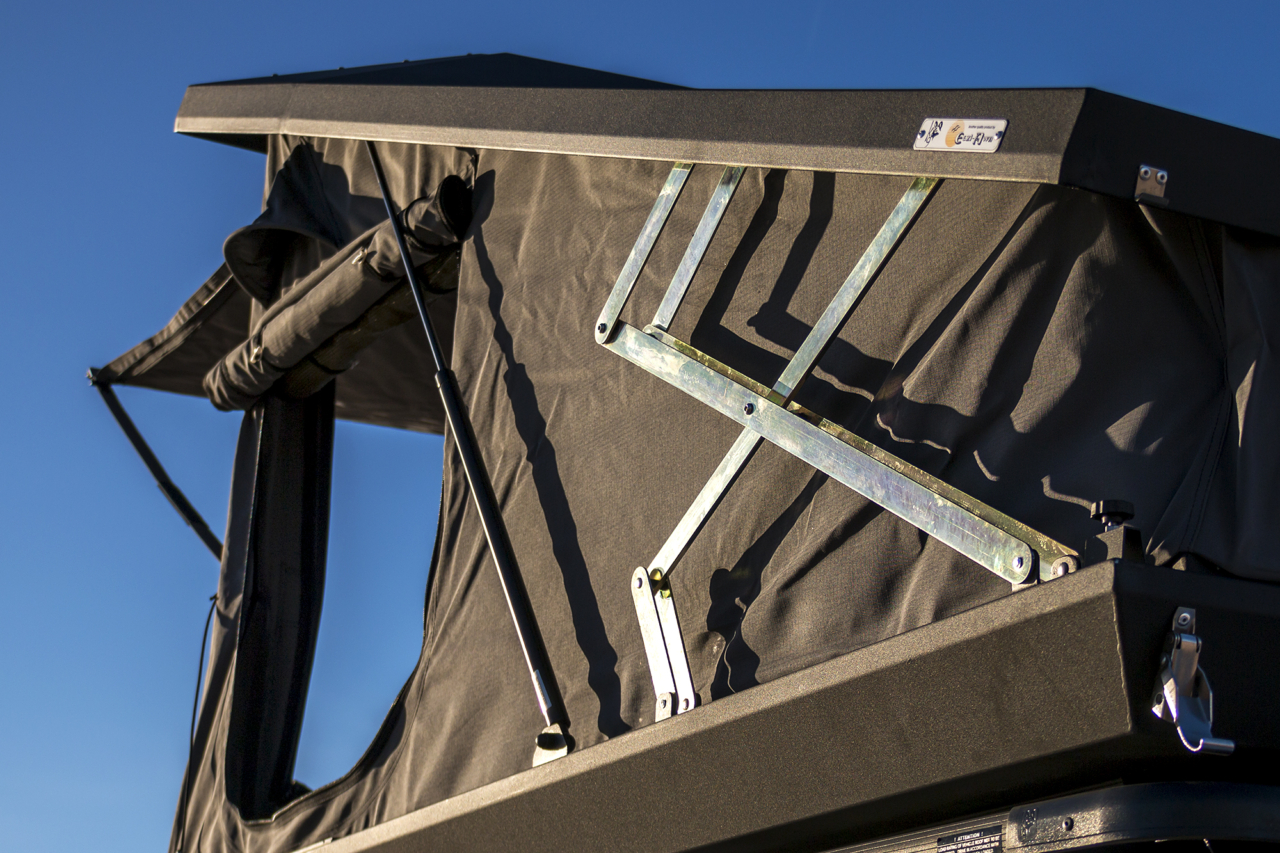 A ladder slides out from integrated storage in the floor, and can be placed for entry through any of the tent’s three doors (or anywhere along the roof rack). Quick-release bungees run along the front, rear, and side walls so that they’ll self-tuck when packing up the tent. Intended or not, rear latches and roof supports double as convenient hooks to hang your shoes…so long as it doesn’t rain. Vents are placed above either side door, and the lack of any sign of condensation proves their effectiveness against the usual cold-weather tent problems. As is typical with most hard-shell roof tents, the walls remain tight and silent in the wind. 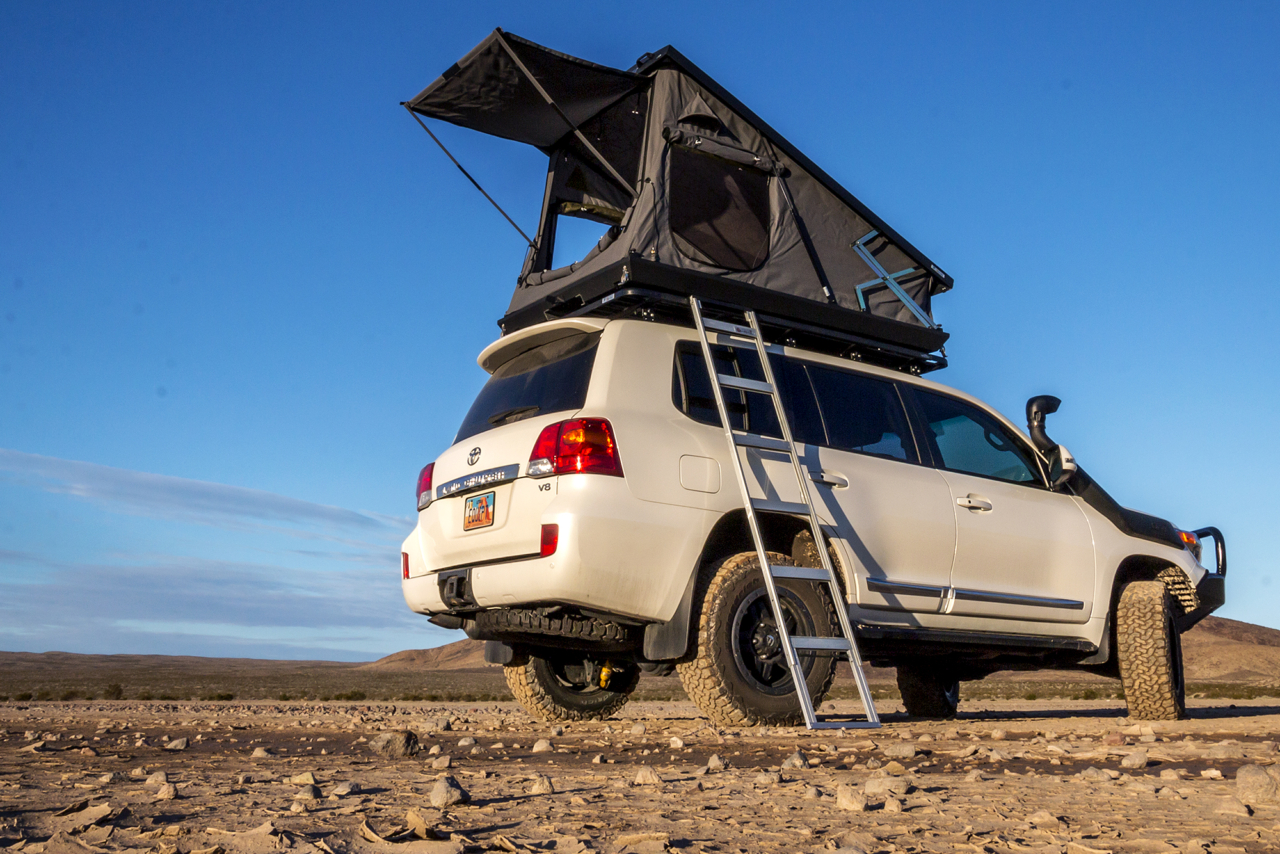 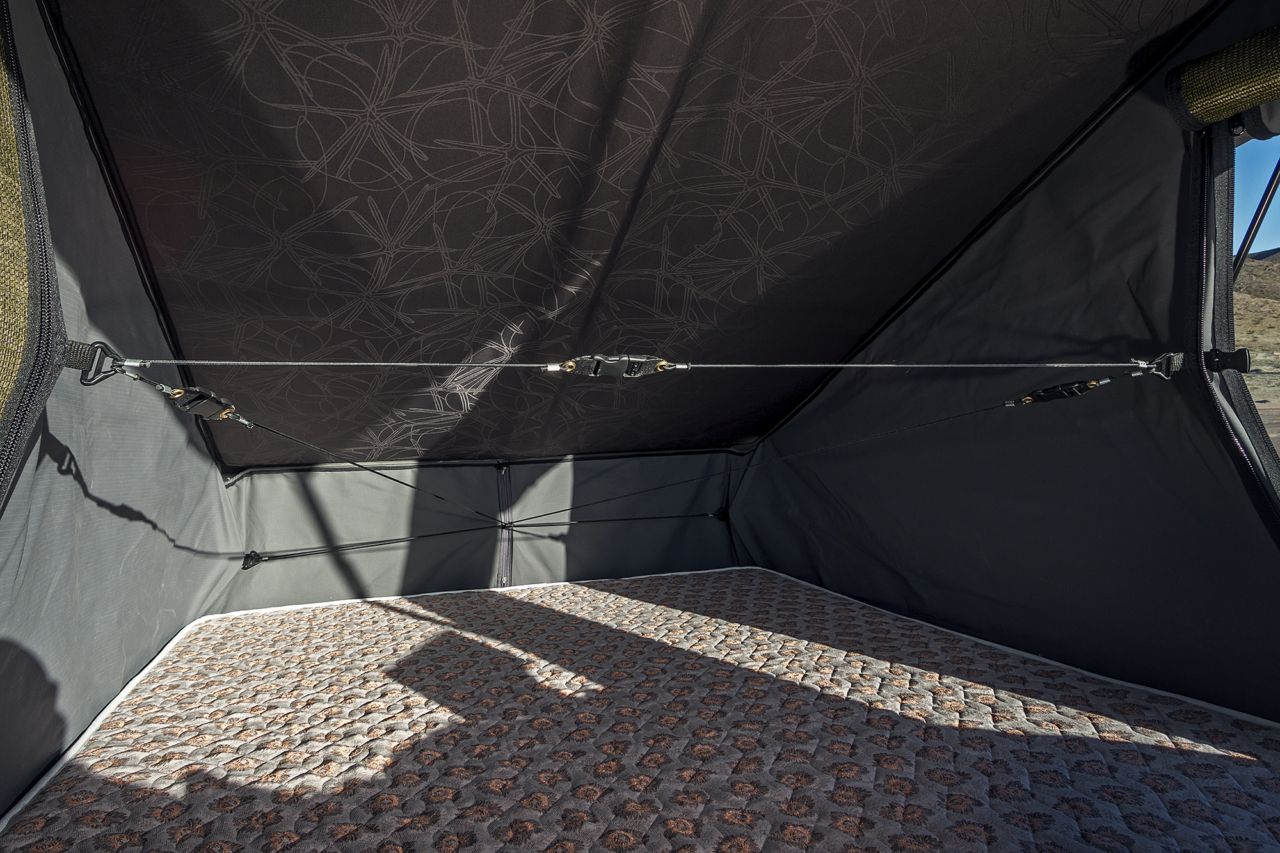 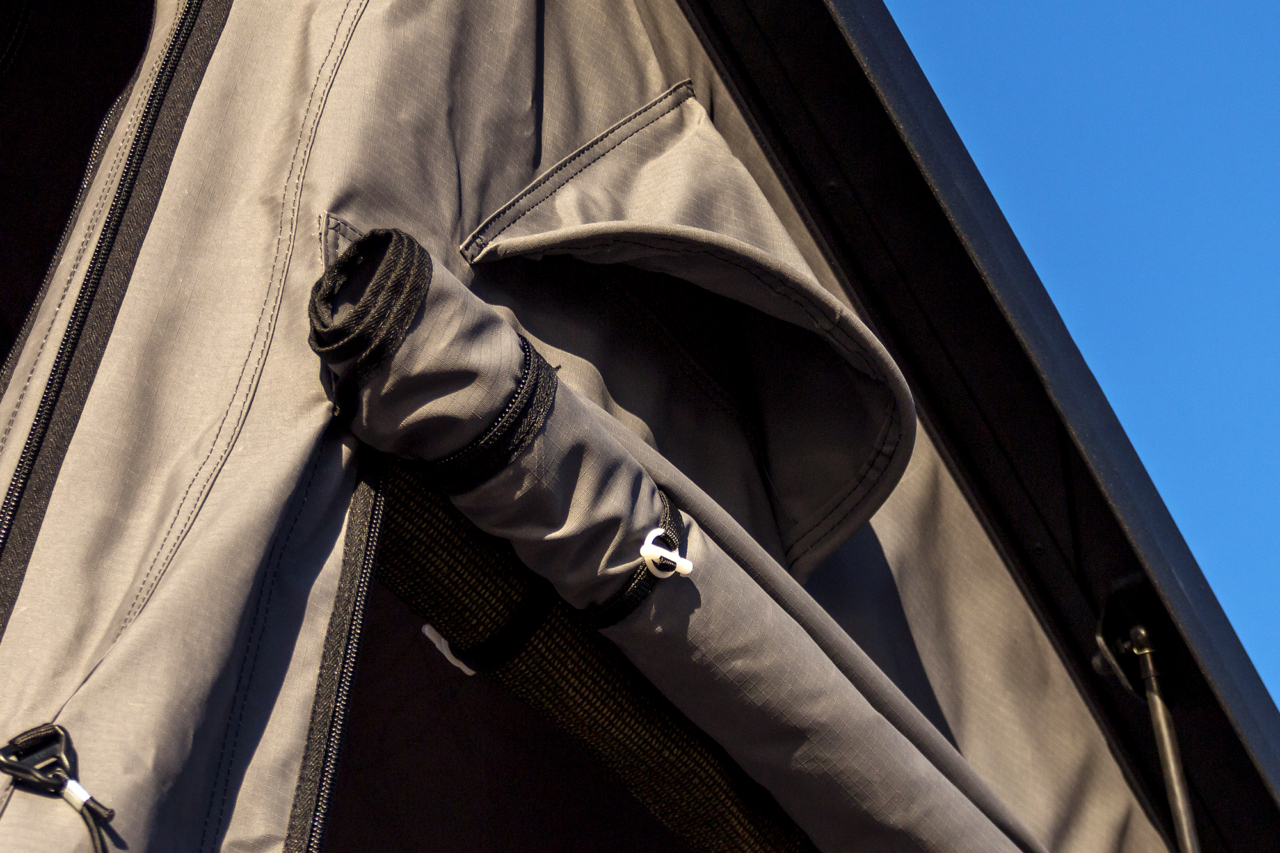 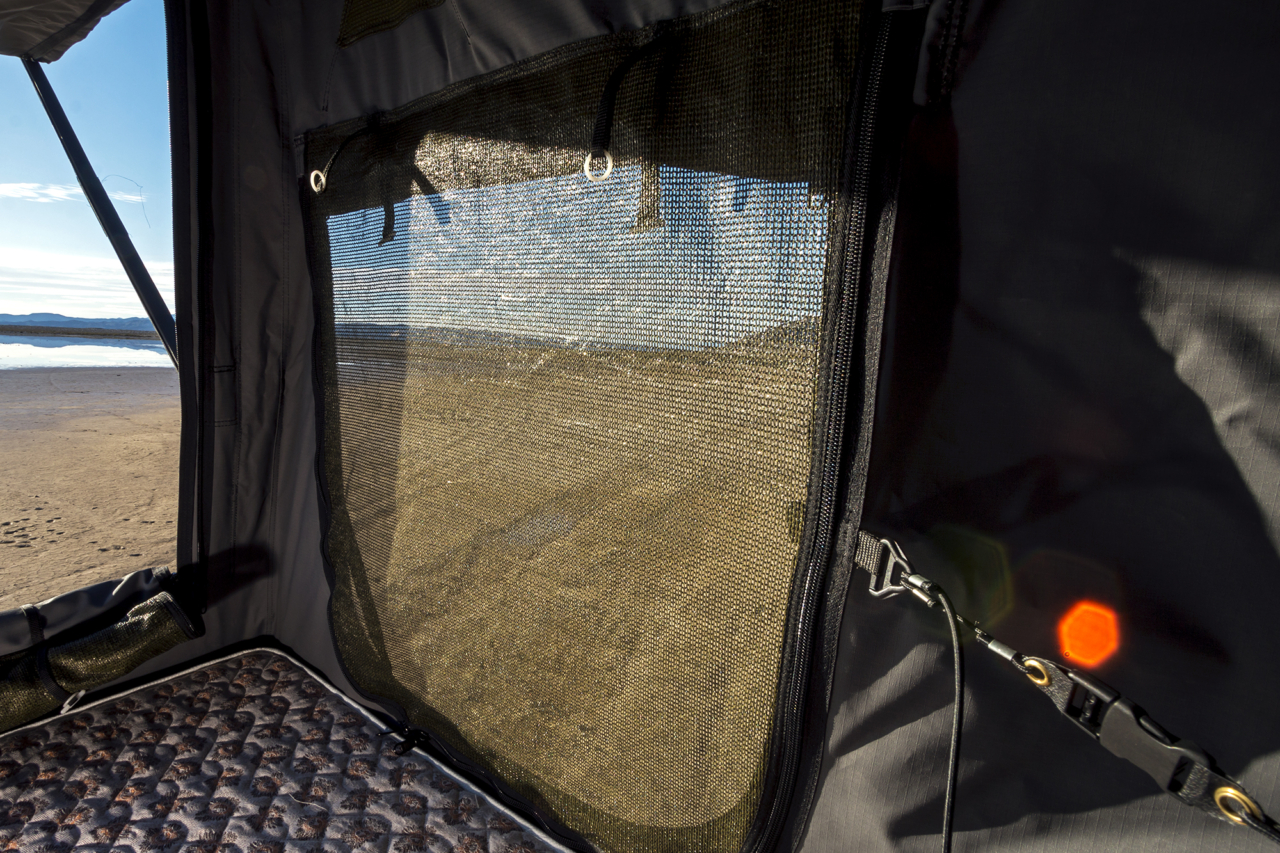 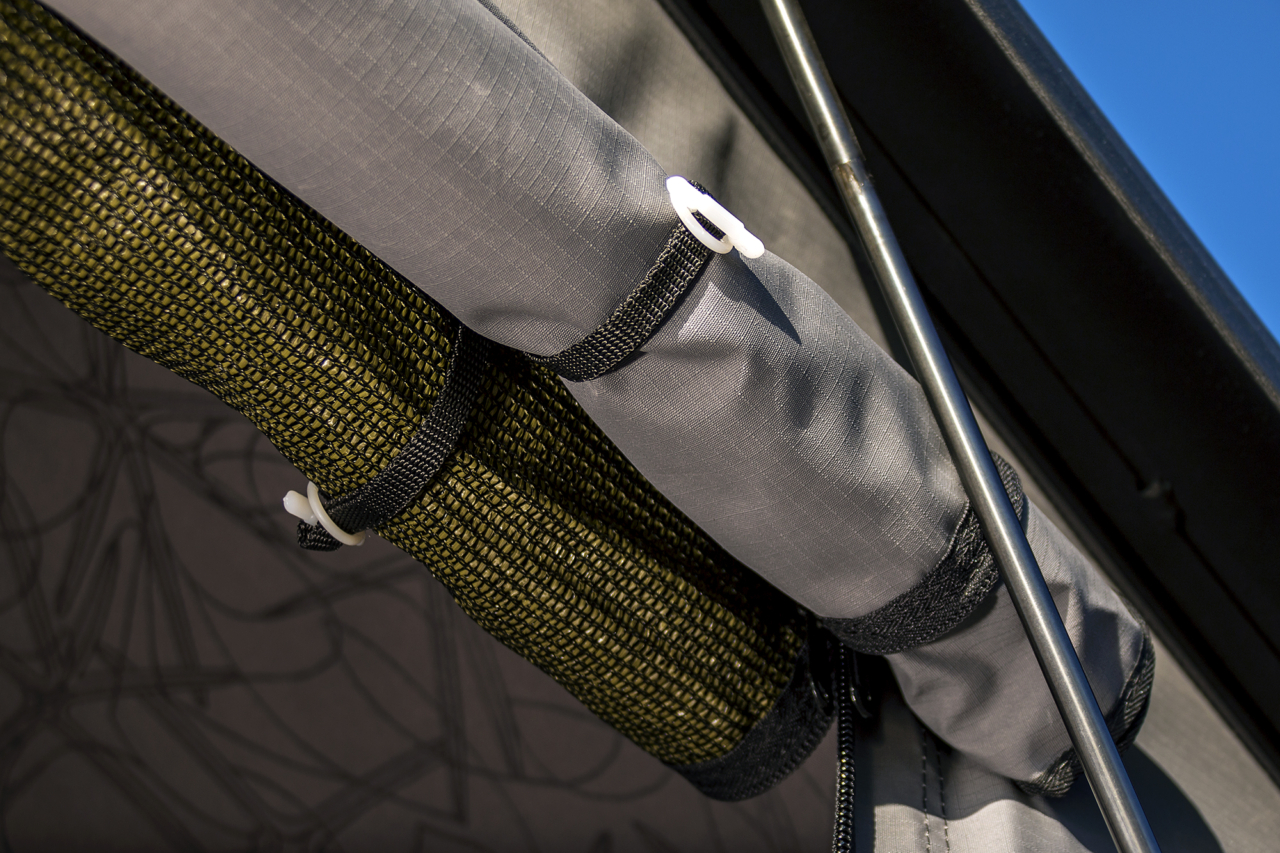 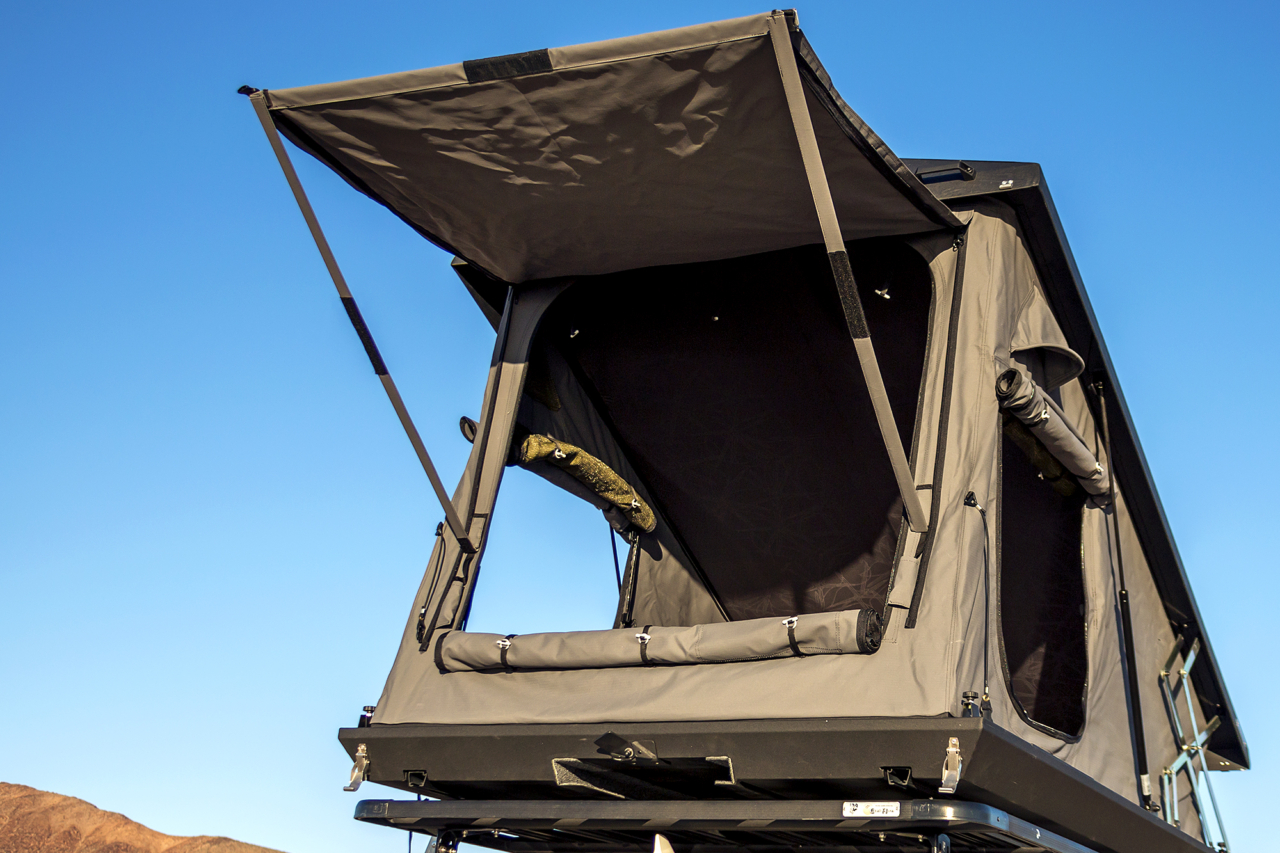 Thick olive-drab privacy mesh screens adorn all three doors, and canvas makes up the door panels themselves. Zippers are large and easy-moving as expected, and each panel has it’s own set of lashings so they can be easily tied open independent of each other. The rear door features a generously sized awning held out by quick-release legs, which Velcro into place both deployed and when packed. The awning is a separate panel from the door, so the door can be fully closed while leaving the awning set up.

Despite the shell being cold to the touch in the balmy 39°F weather it’s still noticeably warmer inside the tent, a testament to the effectiveness of the roof and floor insulation. An aluminum hard-shell isn’t the only first for Eezi-Awn present: entering one of the cavernous doors reveals a brand new quilted-top, queen-size mattress design. This is hands-down the most comfortable camp mattress I’ve ever stretched out on, and rivals the overpriced mattress I have on my bed at home. 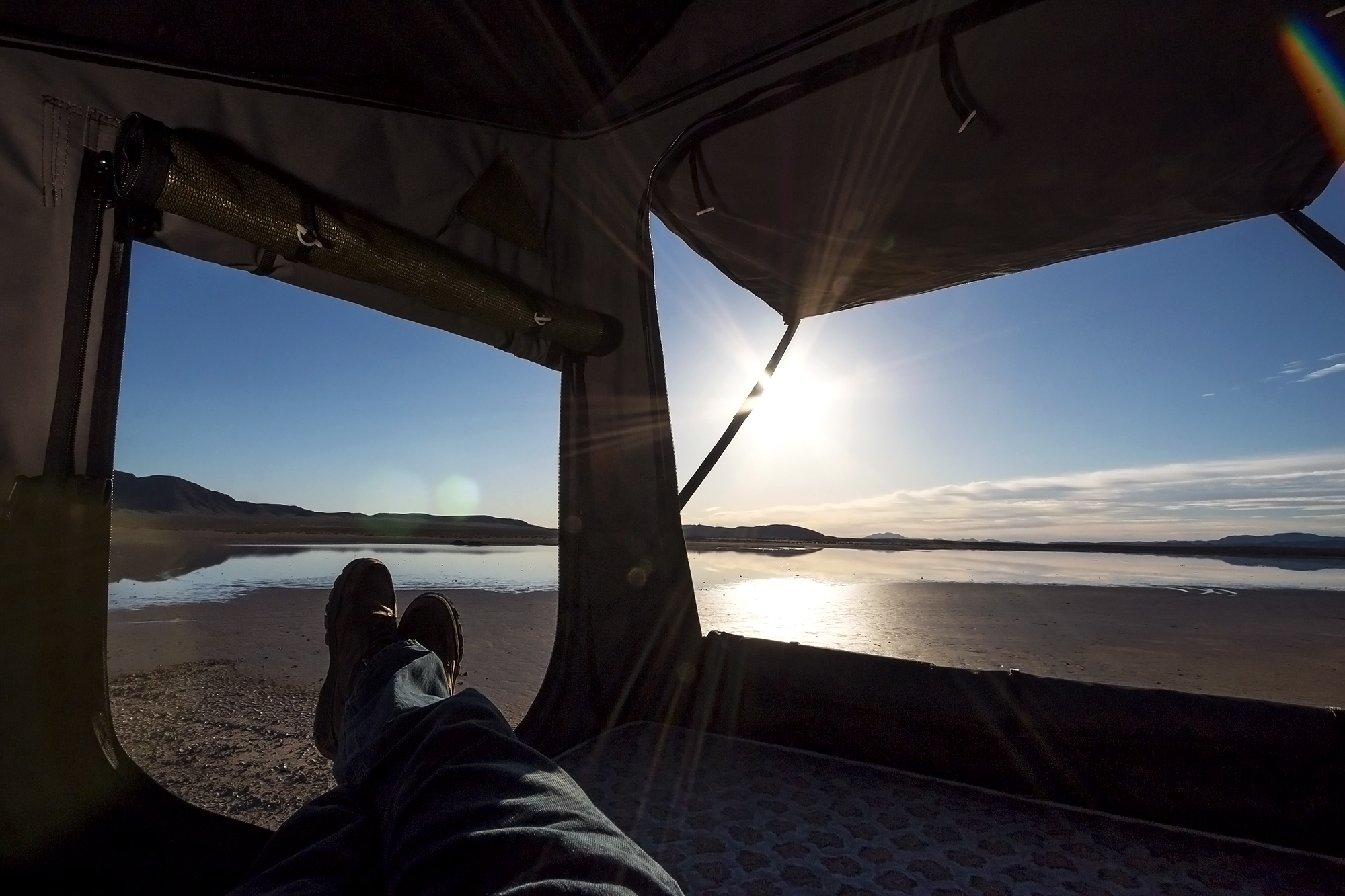 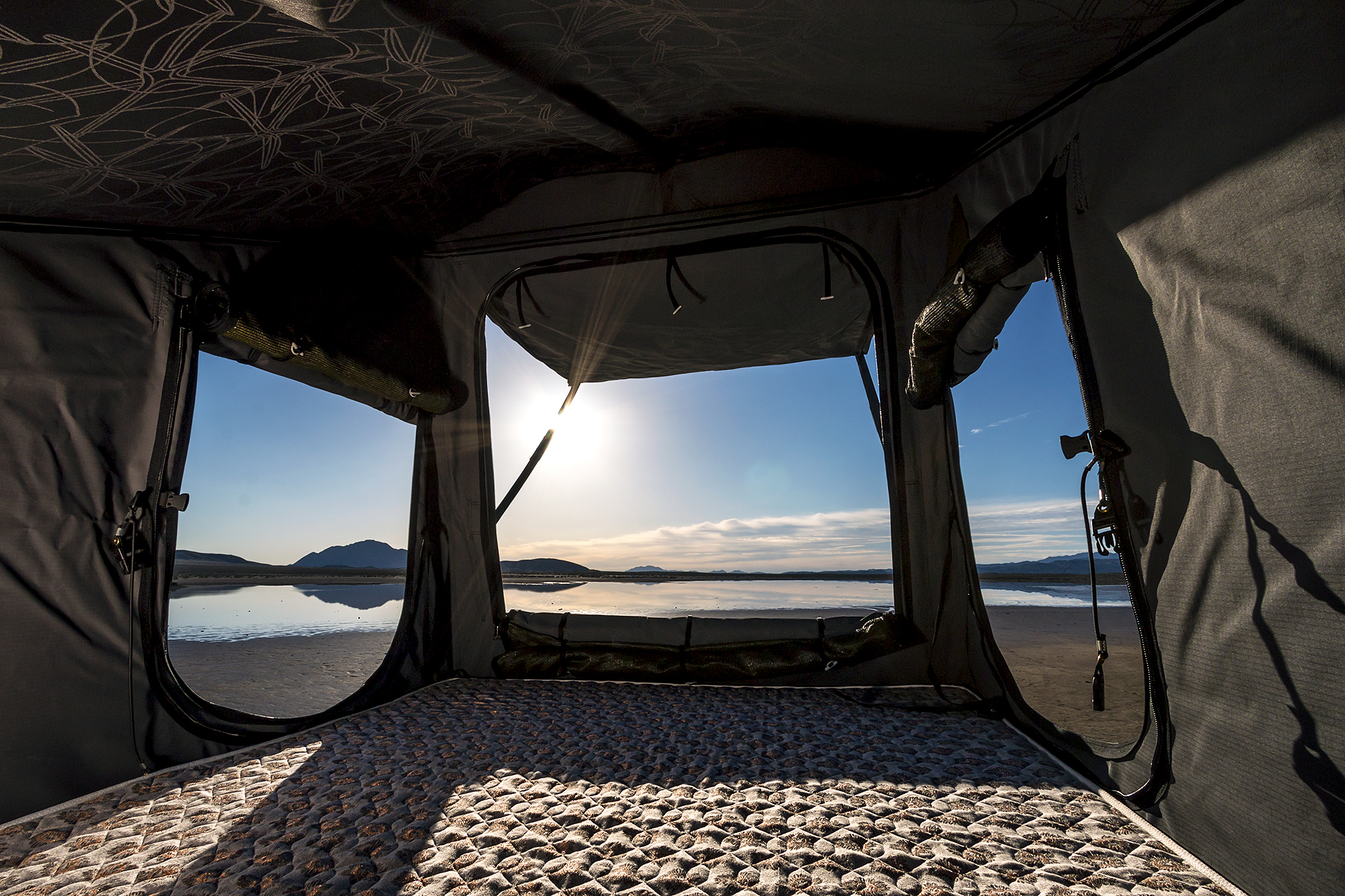 The walls are cut from the same sturdy rip-stop canvas found in other Eezi-Awn tents, this time in a sharp looking gray color (instead of the usual tan). The ceiling is covered in a gray patterned fabric which gives the interior a soft, comfy feel. Thanks to the scissor-lift hinges there’s an ample amount of legroom in the nose of the tent, and the domed triangle at the rear keeps the roofline well away from your head when sitting up (I’m six feet tall, for reference).

The 220-pound weight lands the Stealth near the heavy end of the roof tent spectrum, and means only larger vehicles and trailers will be able to safely carry the tent. It’s large footprint also means you’ll have limited off-tent options for roof mounted accessories like lightbars and awnings. Of course, if you’re shopping hard-shell roof tents with queen-sized mattresses, you’re probably already prepared for those potential limitations. 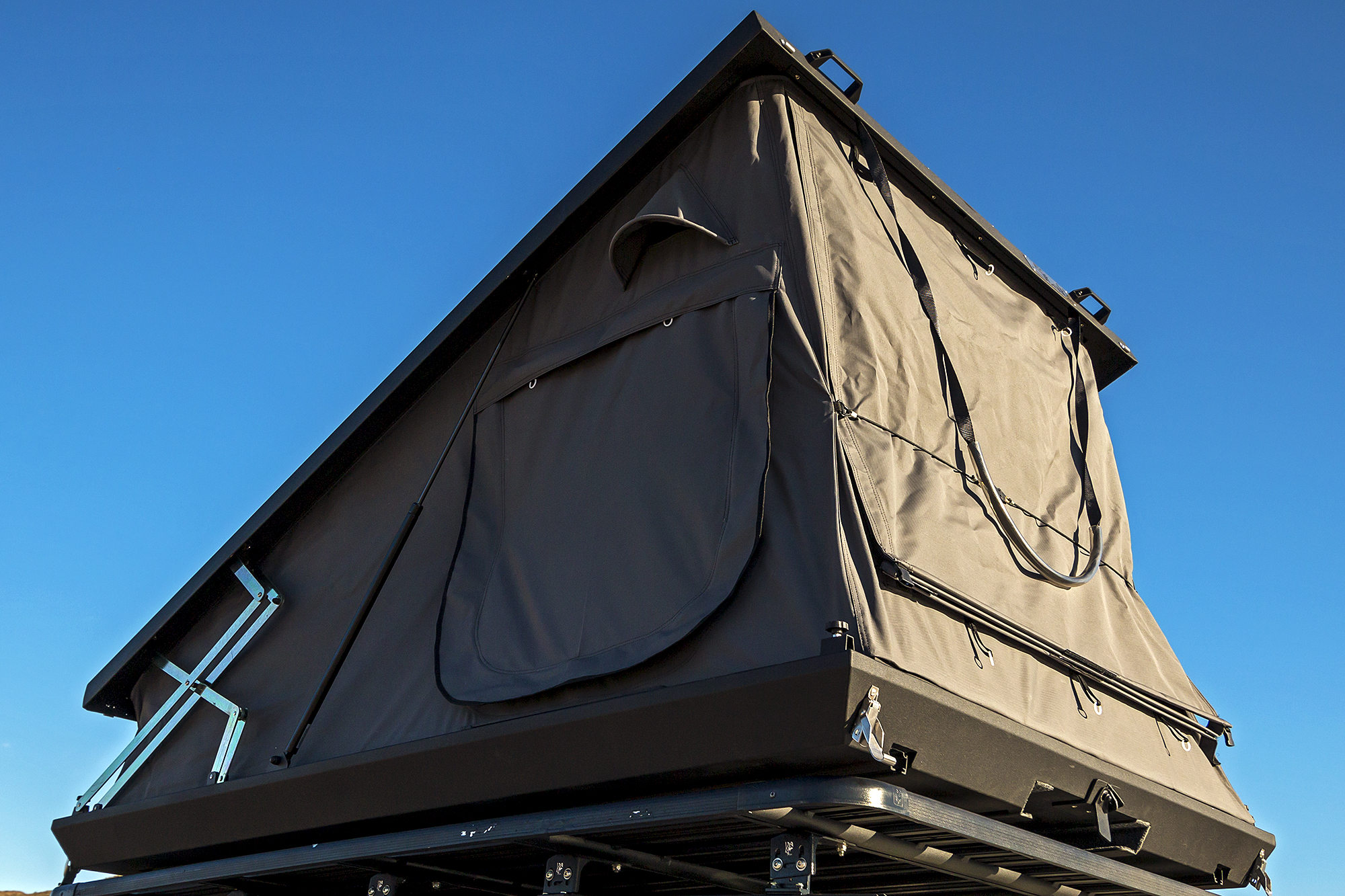 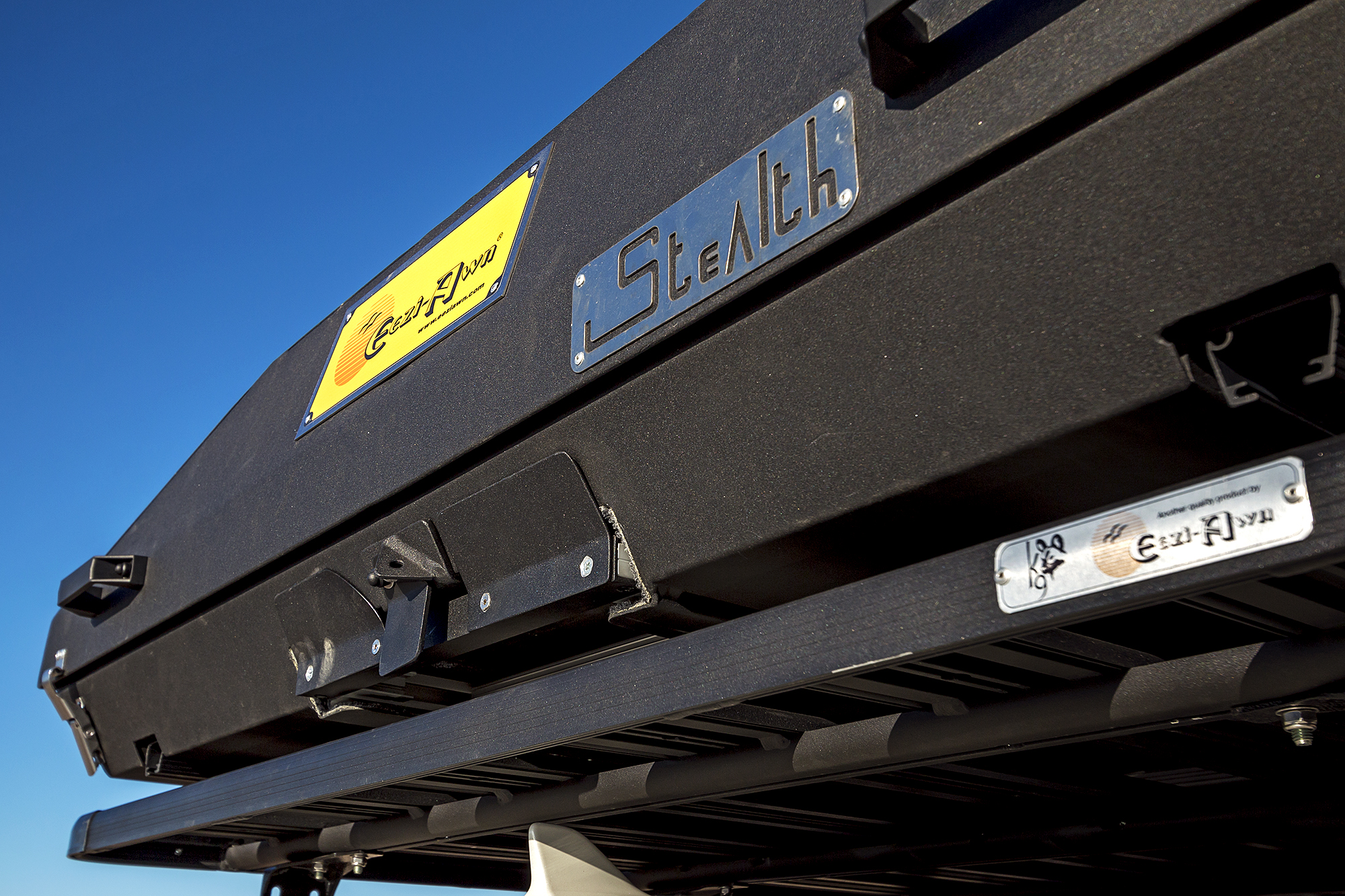 The few gripes I have are admittedly trivial, and are perhaps better read as a “wish list” than complaints. My inner designer is screaming about the giant yellow billboard on the back of the tent—a tent like this deserves a subtle or blacked-out logo. There are no pockets inside for personal items like phones, keys, and wallets. It’d also be nice to see the tent pre-wired with accessory ports, lights, fans, solar, and a quick-release power connection to the vehicle. Finally, load bars or a cargo basket would be a welcome addition for those of us with bikes or canoes. That said, the tent is aluminum: all of these items could easily be added after purchase, and customized to the heart’s content. Who knows, perhaps Eezi-Awn will introduce option packages like vehicle manufacturers do (think: power package, convenience package, cold-weather package). 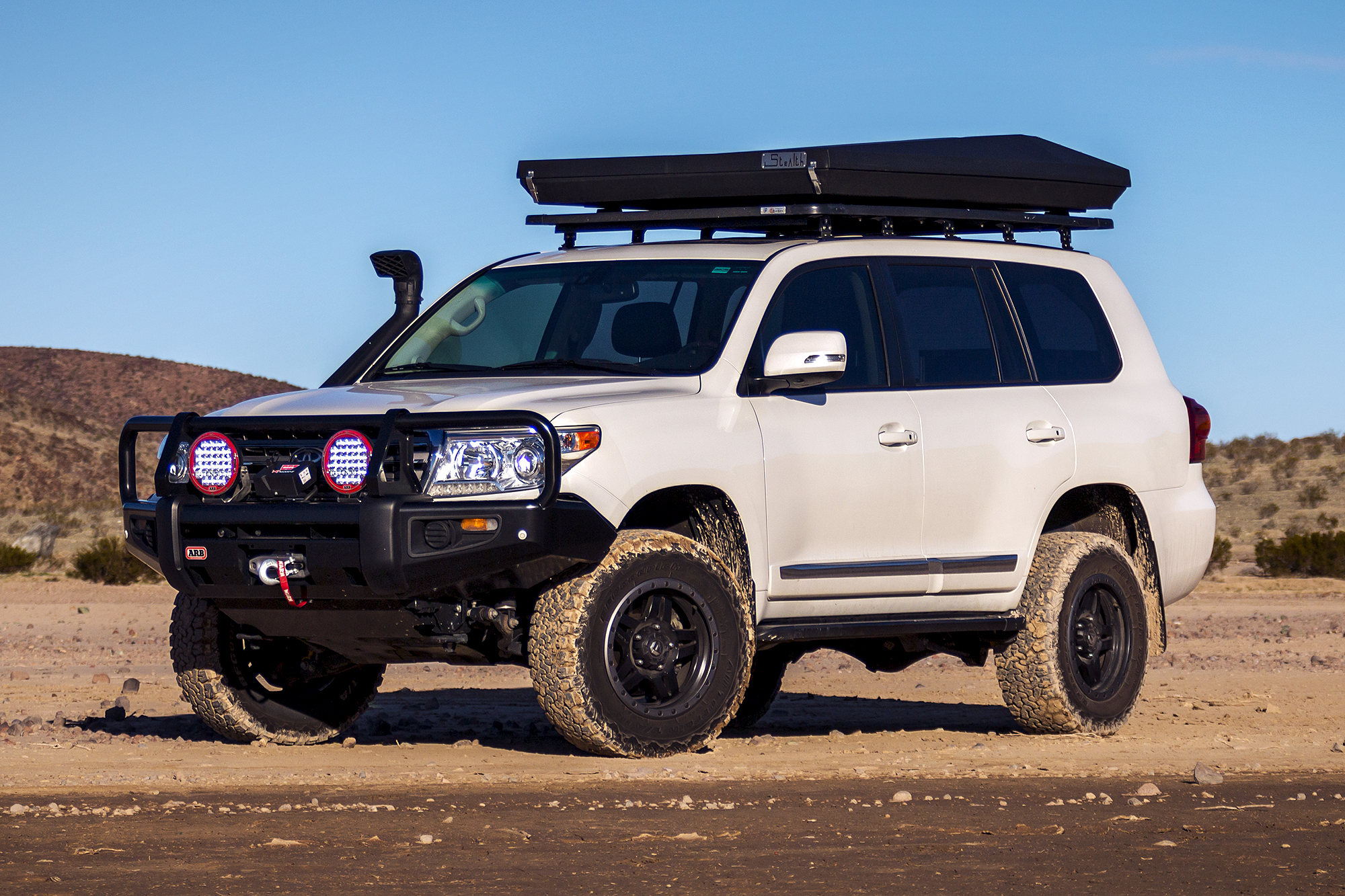 The Stealth is an impressive first entry into the hard-shell roof tent market, and sure to shake things up in the industry. It’s comparable to more expensive offerings from Eezi-Awn’s competition, and with an aluminum chassis it has potentially limitless configuration and customization options. I’m excited to see more innovations coming from some of the original gear manufacturers, and look forward to trying out the tent in warmer weather to see first-hand how it fares. As I write this, I’m designing a new trailer to pull behind my Discovery; the Stealth is now on my short list of sleeping options.

Senior Staff
Founding Member
#2
Awesome article for an awesome company who sells awesome gear with even awesomer customer Support! I gave been a huge fan of EEZI AWN gear for many years. Paul May and his team at Equipt Expedition Outfitters are top notch and will bend over backwards to give you the shirts off their backs. I look forward to seeing the Stealth in person.

Founder
Senior Staff
Editor
#3
Agreed. It's funny to look back over the last decade or so and note all the roof top tent companies that have blatantly imitated Eezi-Awn. The Stealth will no doubt be another such innovate and often copied product.

Equipt, with Paul May at the helm, led the charge in North America that made roof top tents a common sight. Glad to see Equipt continuing to evolve and bringing us the best gear on the planet. And Paul's 200 Series Land Cruiser is the bees knees, adding a Stealth to that mix has me dreaming...

Senior Staff
Founding Member
#4
Looks like a great option. If I had a suitable vehicle and need, this would be at the top of my list. I've considered a RTT for my 4-Runner but it's a bit narrow and wouldn't get used often enough.

richard310 said:
Awesome review Chazz. Holy cow, 220lbs is beastly, but it definitely looks like it'll last a lifetime.
Click to expand...
Yep, 220 is pretty heavy, but I was surprised to learn not the heaviest...

Senior Staff
Founding Member
#7
I have never cared for the looks of a rtt on a vehicle, but this is a sleek, clean line that I really like the looks of. I am trying to picture the truck with a bed rack and this mounted to sit flush with the roof line, and I like what I am imagining.

Founder
Senior Staff
Editor
#8
I always said if I ever did a RTT again it would be a hard shell. This being aluminum really makes that hard shell more attractive because it's tough and you can attach to it if needed - that utility is a very big selling point.

Impervious to weather or UV or tree branches is a huge advantage over a soft shell.

#9
BlkWgn said:
I have never cared for the looks of a rtt on a vehicle, but this is a sleek, clean line that I really like the looks of. I am trying to picture the truck with a bed rack and this mounted to sit flush with the roof line, and I like what I am imagining.
Click to expand...
You think like me. I've wanted to do a setup like that for a while now since seeing this. The design of the Eezi-Awn Stealth is better than others I've seen out there.

#10
http://www.ikamper.com/ I almost jumped on their kick starter yesterday but I like the size of the big CVT Mt Denali better. I am looking at having three to five bodies in there and the normal hard shells are just too small for my needs. If I knew fiberglass better I would love to build the CVT tent into my shell.

#11
Awesome work, Chazz! The Stealth looks like it could shake up the stale RTT industry. Fingers crossed.