A Bullfrog in your Basecamp : American Adventurist

As a longtime audiophile, I’ve always appreciated the high end sound of Kicker. Founded in 1973 by Steve Irby in his garage in Stillwater, Oklahoma, Kicker pioneered the first full frequency-range speaker box designed specifically for cars and trucks. Their iconic “truck box” speaker paved the way for the mobile audio genre as we know it. Now, they’re making wireless speakers for outsiders like us. The latest in this lineup is the Bullfrog Series.

Recently, I was contacted to perform an independent, unbiased review of their new Bluetooth wireless speaker.

Yes, you read that right. And now you’re thinking, “how the hell can anyone provide an unbiased review on free gear?” To this I say, that’s a GREAT question and one I’ve given much thought to lately. This community was founded on telling it like it is and that continues here with Adventurist Life Magazine. We’re keen on breaking the current paradigm of advertorial pablum, especially in the Overland segement. So if something sucks, rest assured that we will say so.

Advised up front of my intent to be brutally honest, I was amazed when Kicker still wanted us to review it.

So let’s do this – I bring you the Kicker Bullfrog BF400 Bluetooth Music System. The 400 is the largest of their lineup, which comes in three sizes and two colors. 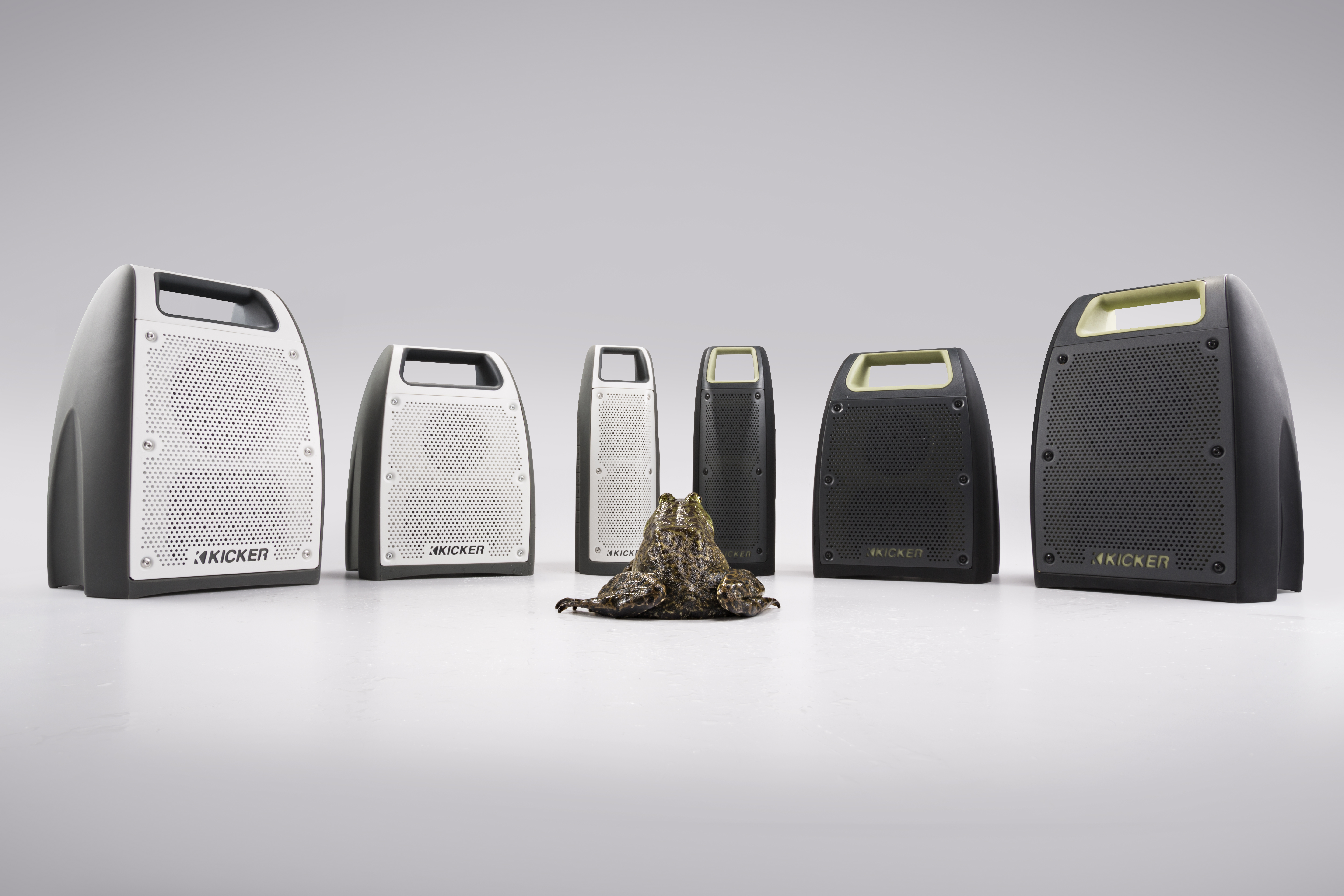 I’ve been listening to this thing in the garage and around camp for going on two months now. The first thing I noticed on grabbing the box was that it’s heavier than it looks (Kicker lists it at 8.6 pounds). So unless your last name is Sasquatch, scratch this from your backpacking gear list in favor of a gallon of water at a mere 8.3 pounds. This little guy is a serious basecamp speaker that can serve double duty as a kettle bell so it’s best transported by sherpas or combustion engine. But anyone who knows anything about speakers knows that a hefty magnet is a good indicator of sound potential, so after the initial charging we took it for a spin. It did not disappoint. 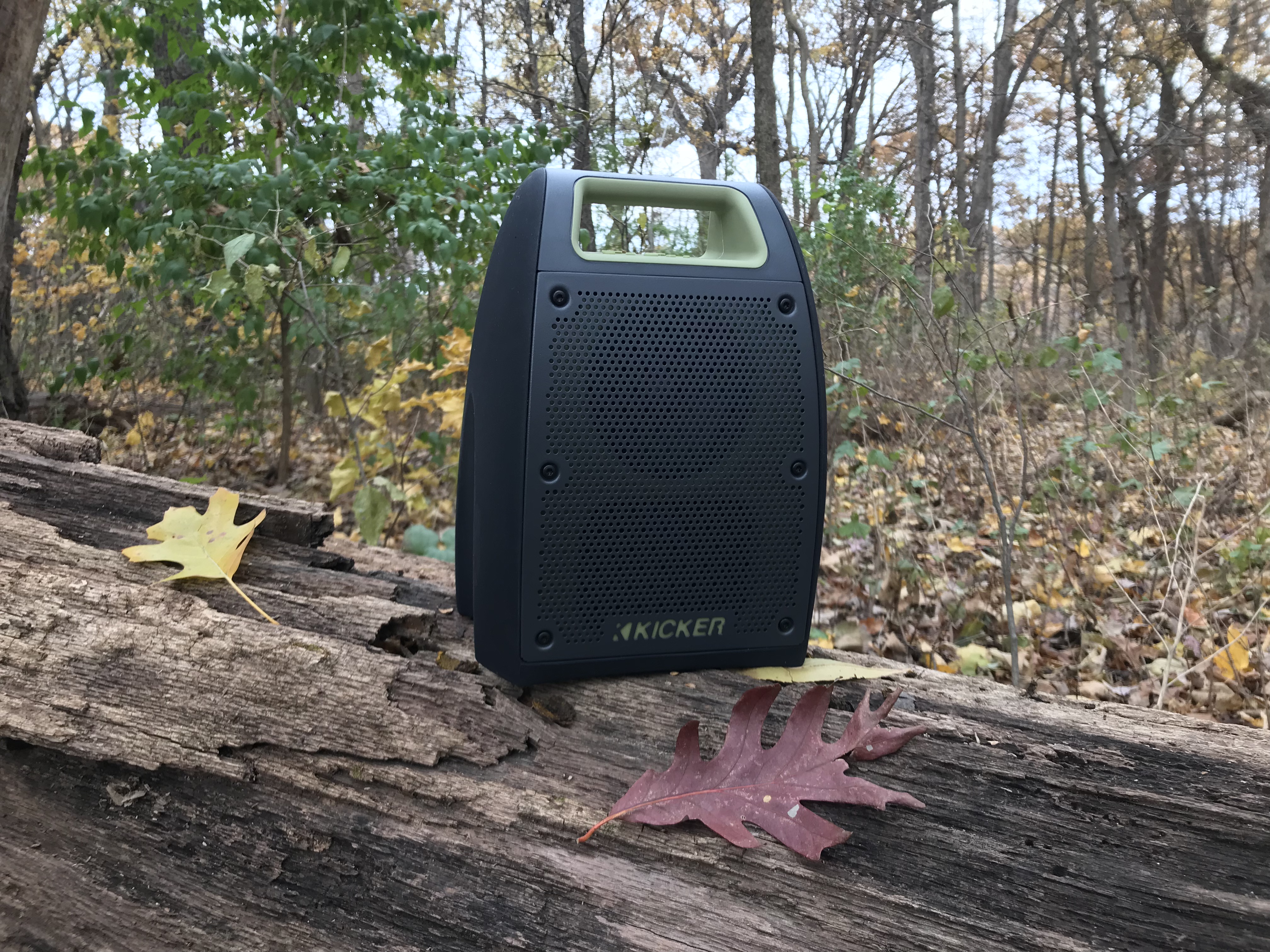 Looking at the exterior of the Bullfrog, the handle is sturdy and the case has a nice rubberized coating that covers the controls, with rubber feet for soft landings. It’s clearly amphibious by design and has an IP66 rating so it’s equally protected against dust, dirt, sand, and water. What the heck is IP66 and why should you care? Because to pass IP66 testing, the device must be able to withstand water projected from 0.50-inch nozzle, multi-directional, high-pressure jets for a minimum of three minutes, at a distance of three yards, with a water volume of 26.4 gallons per minute and a pressure of 100 kPa. That’s why.

So in camp or in the driveway, it’s not going to suffer any degradation if left outside in the driving rain and wind. IP66 is a great thing!

Powering it up, the controls on the Bullfrog are simply laid out, a feature that we sincerely appreciate. A simple power button, volume up/down, play/pause/track and Bluetooth Pairing/Source buttons are all right there in plain sight. LED’s tell you what your battery level is, while a single small LED lets you know what the source is.

Honestly, I was slightly amused to see an FM radio receiver built into this unit. Surely this adds utility but I can’t remember the last time I actually listened to a radio station, since the advent of apps like Spotify and Pandora, my music listening habits are purely digital. I’m sure some folks may find the FM radio feature useful for tailgating and listening to the game or maybe the weather or news. 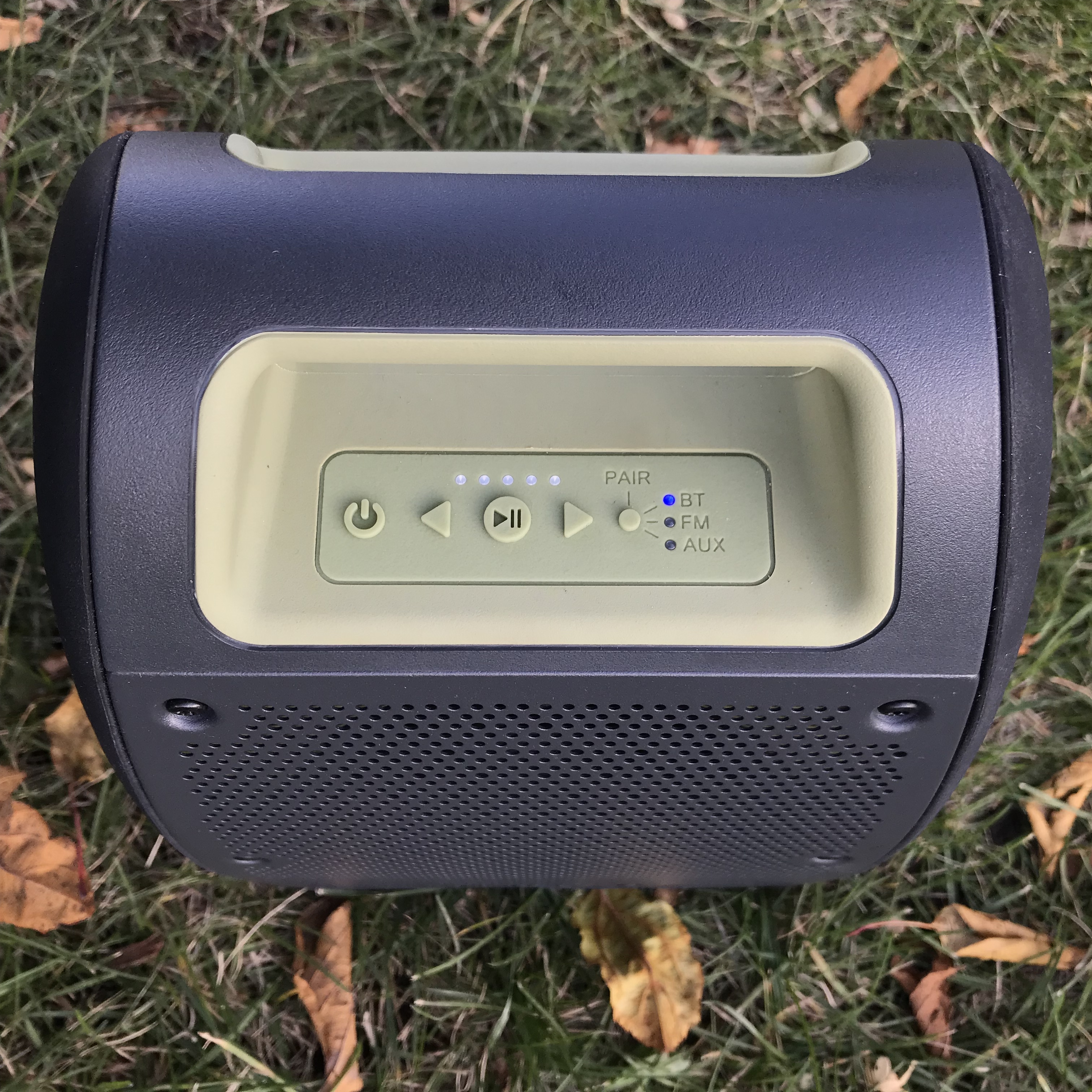 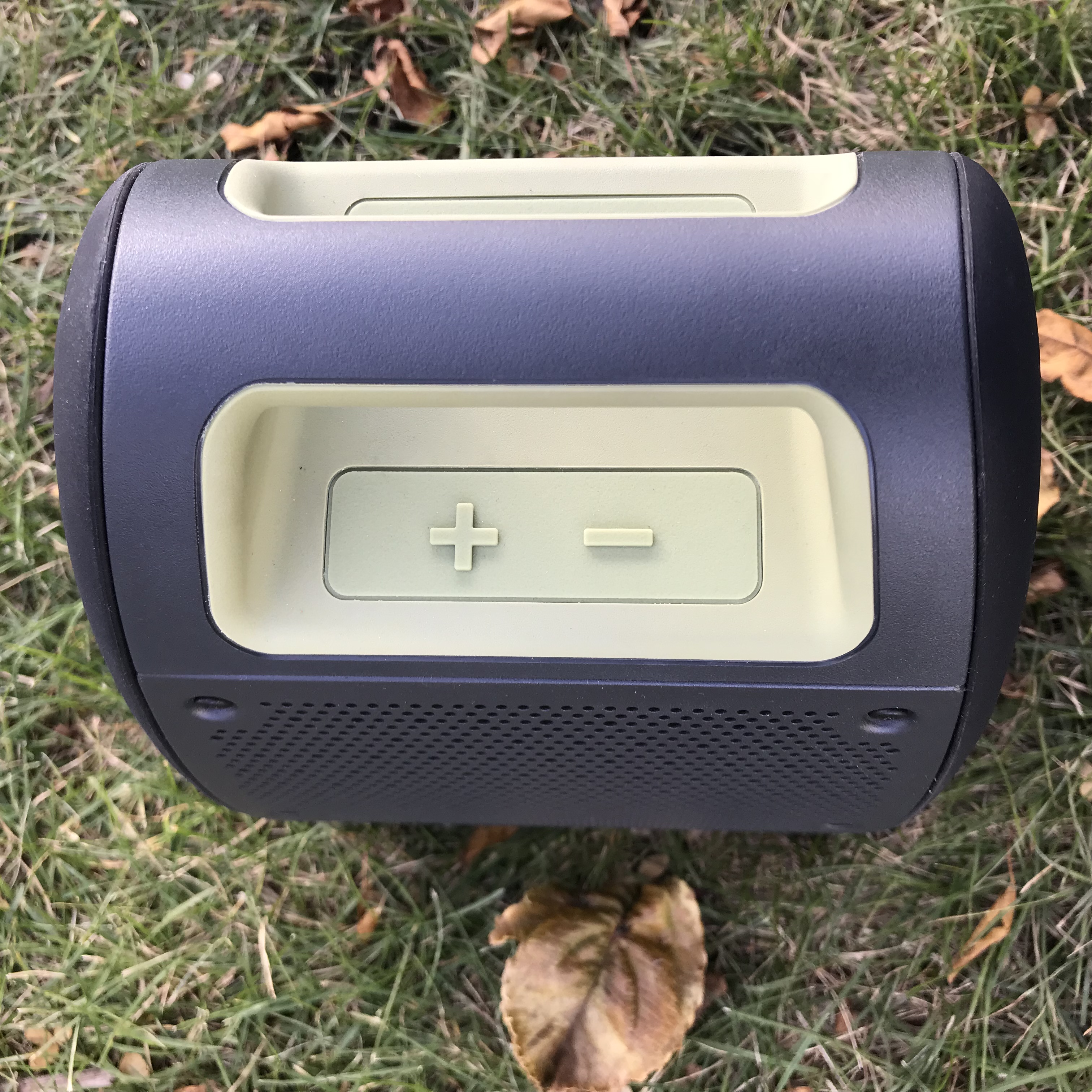 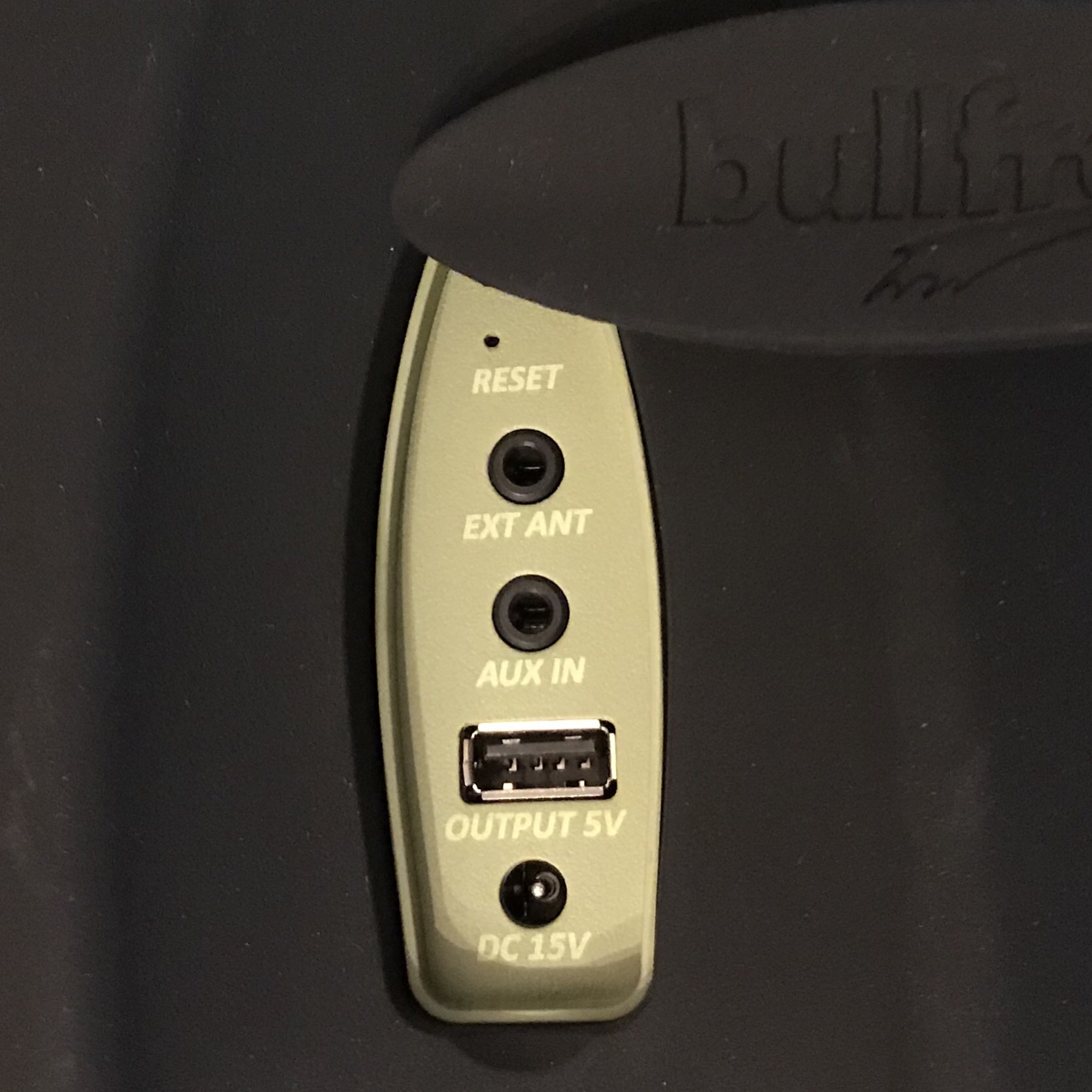 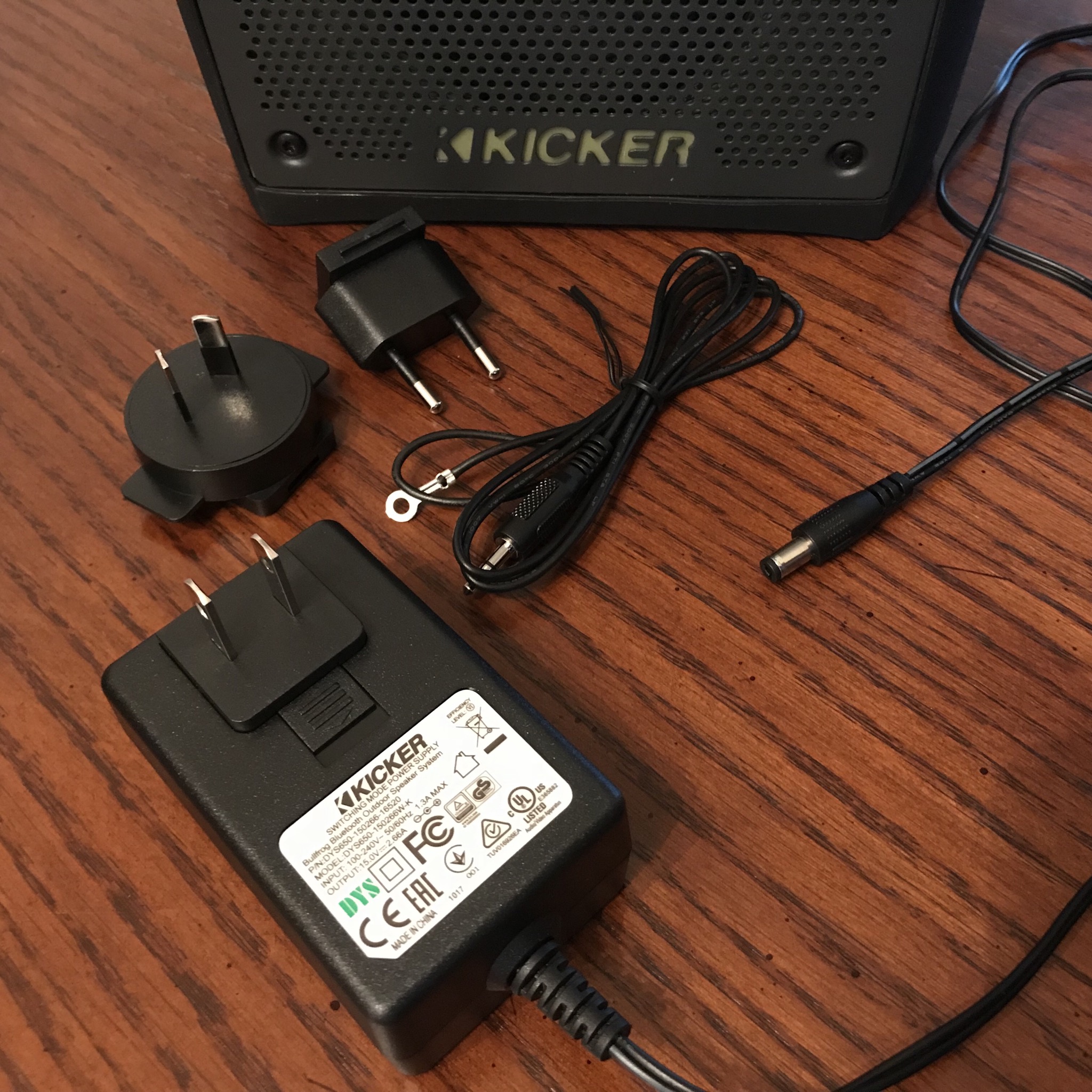 Speaking of digital music, Bluetooth pairing to my smartphone was near instantaneous and lets you stream audio from 100 feet away. This is a nice feature in the garage or in camp as you can control everything from your phone if you want. Testing this out, I was able to roam anywhere within our large campsite without losing connection so the advertised range of 100 feet worked for me +/- about 10 feet. Accessories include an external FM antenna and a wall charger with travel adapters for the US, AustralAsia, and Europe.

The Bullfrog’s Guts and Brains

Opening the rubber side panel reveals the only exterior access port on the Bullfrog, everything else is sealed up tight. This panel reveals the “hard reset” port, external antenna and aux in jacks as well as the 15V DC charging jack. The 3350 mAh lithium ion battery attained a full charge in about 2 hours and “off the grid” battery life on this unit is rated at a whopping 20 hours. A USB 5V charging port enables this unit to act as a big battery pack for your other devices, and also allows you to connect your device for playback sans Bluetooth.

While we did not listen for 20 consecutive hours, it went two weeks on a single charge and played whenever and for however long we wanted without issue. Most people interested in buying a wireless speaker like this want something that’s going to be good for a few days off grid and the Bullfrog is more than capable of this. I looked at other speakers in this genre on Amazon and the Bullfrog 400 seems to be the largest in it’s peer group, no doubt due to it’s battery and speaker size.

Inside the Bullfrog are two 3″ full range drivers and two 3×4″ passive bass radiators (one on each side) which provide 360° sound. This is an ideal arrangement for a “set it and forget it” type jukebox that can be utilized just about anywhere with minimal consideration for placement or speaker orientation.

For even more control, Kicker has an App for iOS and Android called Kicker Connect which gives you a five-band equalizer, FM tuner with presets, volume control, On/Off, and battery status all on your smartphone. If a friend has a Bullfrog, the App also allows you to pair two Bullfrog units together wirelessly via the DoubleKICK Connect feature. I didn’t get to try that feature yet but it’s a very cool idea. The equalizer settings are nice, my favorite is the Outdoors setting as it adjusts the bass level so that it sounds big even when it’s outside on a table or in a tree. 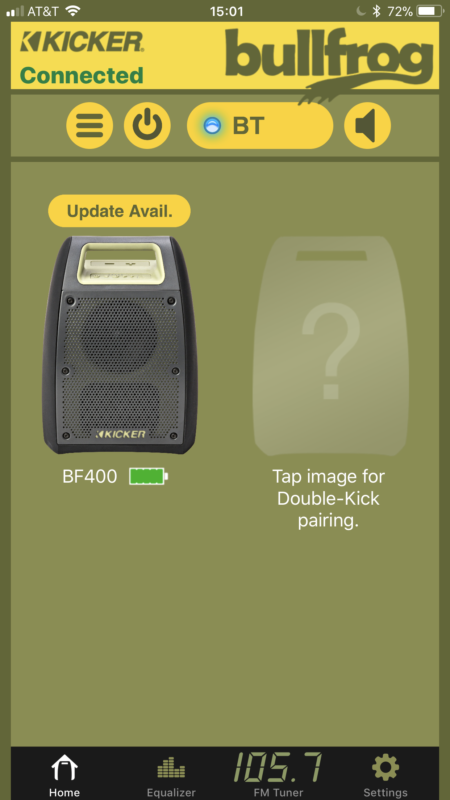 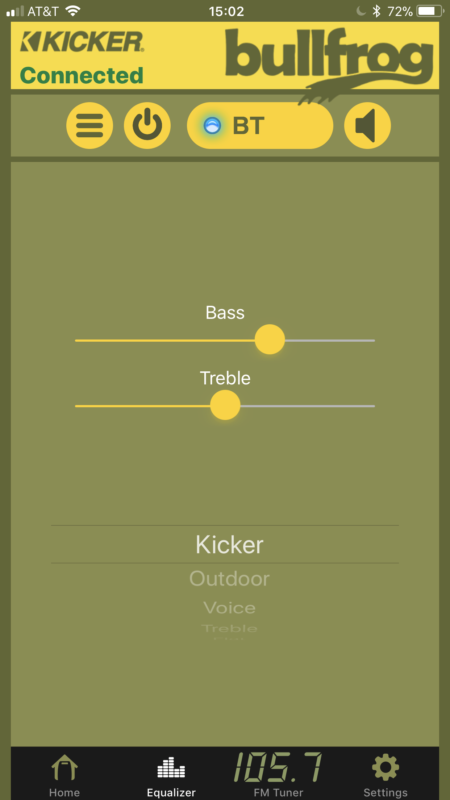 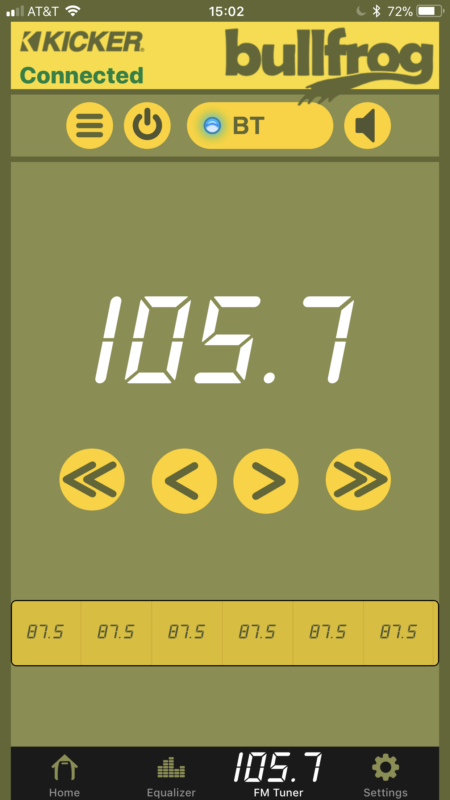 Speaking of cool ideas and apps, it would be the bees knees if Kicker updated their App to allow a smartphone to be used as a microphone. This would enable the Bullfrog, or a pair of them, to be used in the field at outdoor events as a wireless PA system. It could also benefit from the addition of speakerphone functionality. These small tweaks to the App would add serious utility to an already cool product. Kicker, are you listening? I hope so, because that feature would be a game changer at outdoor events! 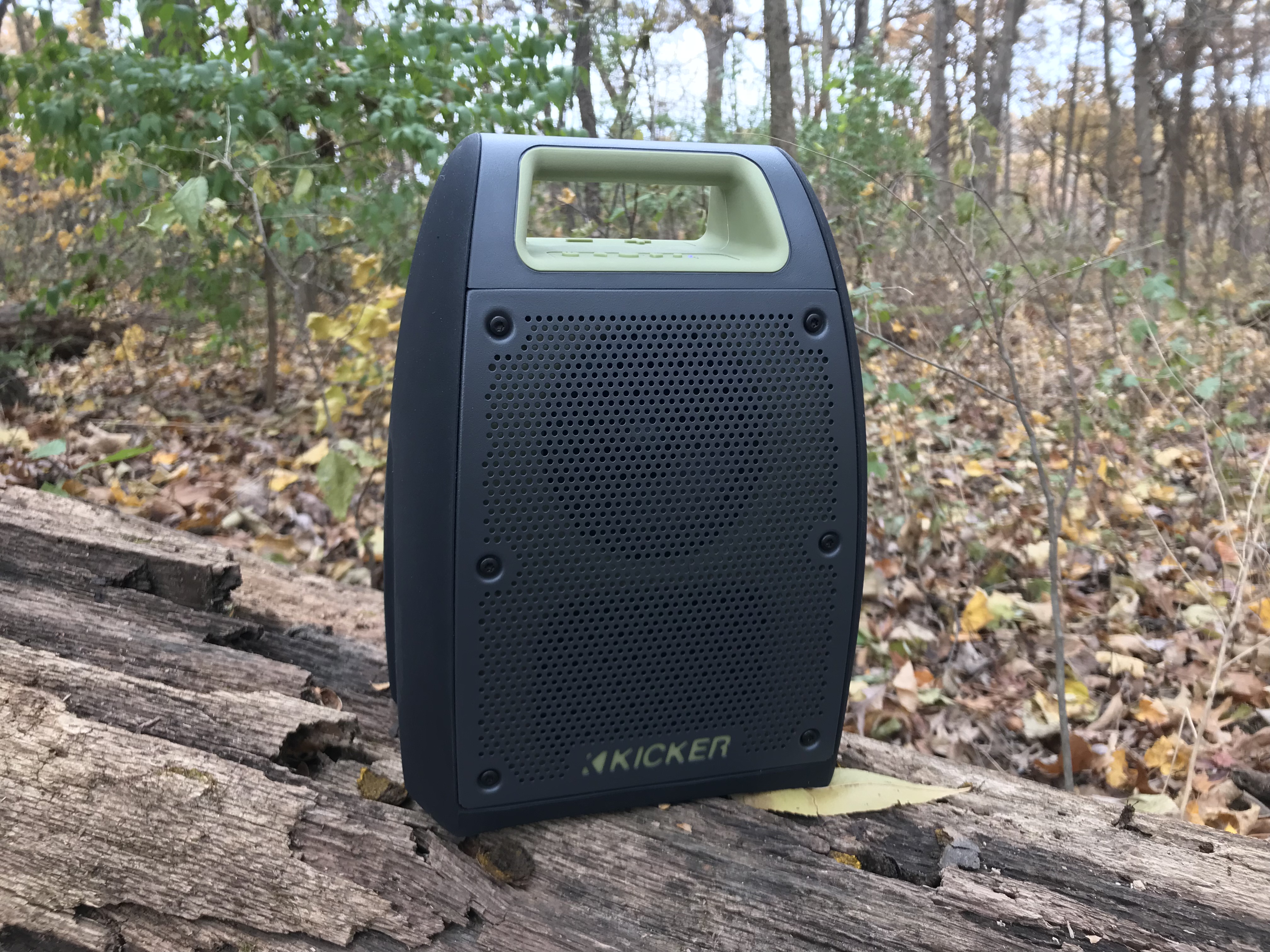 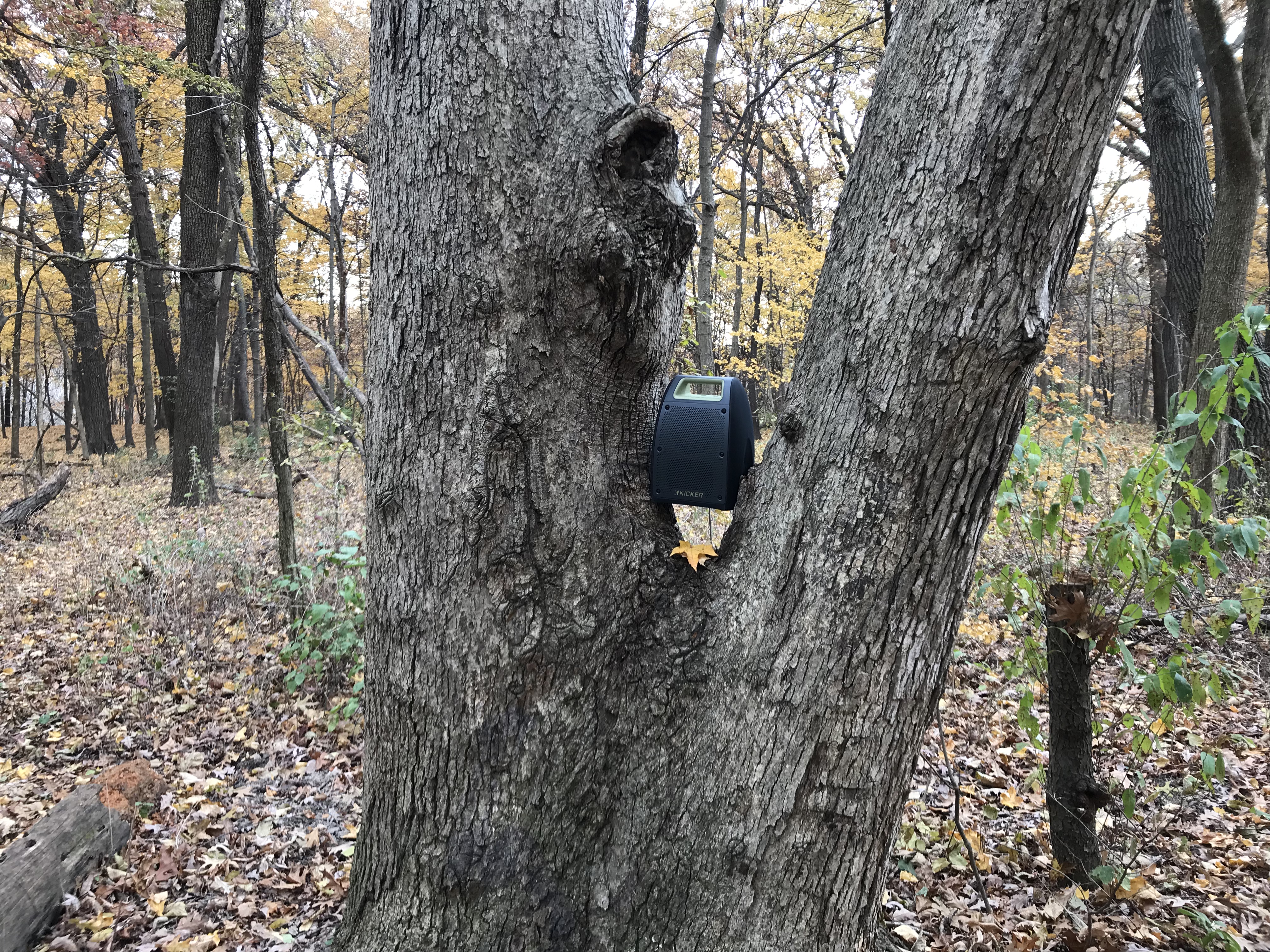 The single most important question when you choose audio equipment? Sound quality.

To test the sound quality, I wanted some songs that would really illustrate distinct highs, mids and lows. Using Spotify with the highest quality streaming (approximately 320kbit/s), I chose three songs to see what it could do: Nobody’s Fault But Mine by Led Zeppelin, Californication by the Red Hot Chili Peppers, and Family Table by the Zac Brown Band. It did an outstanding job of replicating the different layers, vocals, timbre and instruments that each band is known for.

In my opinion the sound quality (and bass response in particular) is pretty damn good considering it’s size, putting it on par with similar high end offerings from Bose and JBL – it sounds nice and clear even when cranked way up and has that kick that you’d expect from Kicker. For this I give it 5 out of 5 stars for sound quality. 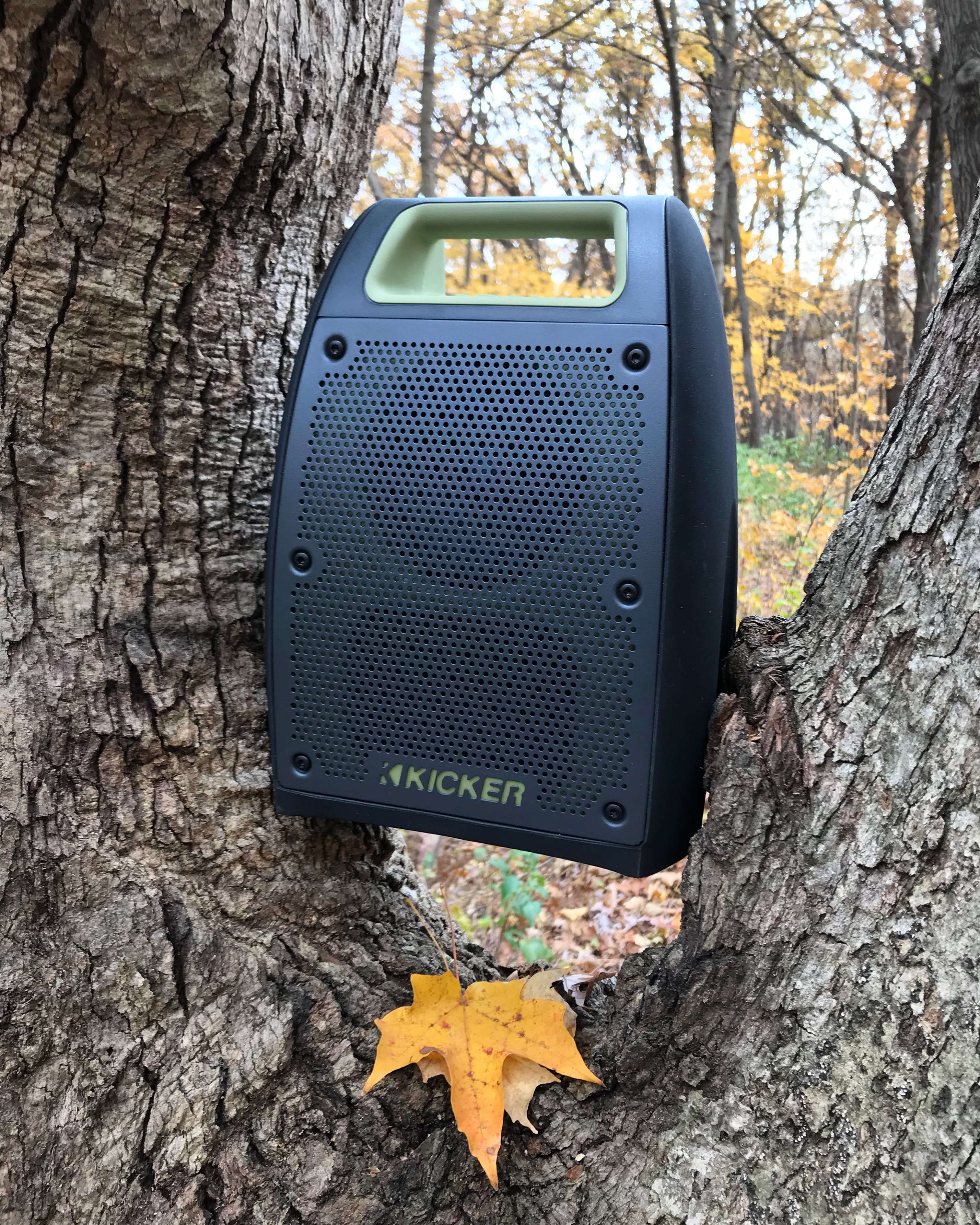 The Kicker Bullfrog is a pretty amazing speaker and I can recommend it without reservation.

What I don’t like is the price. MSRP on this amphibian is $399. Four. Hundred. Frogskins. My honest opinion is that Kicker priced this about $100 too high as it competes directly with the Bose Soundlink Revolve priced at $299. It’s size and weight limits portability, and try as I might I just can’t love their App. Yes, the Kicker Connect App does the basics, but as I stated earlier there’s a ton of untapped potential to make the Bullfrog even more useful.

What do I like? The SOUND. It’s one bad mamma jamma with deep bass, clear mids and highs, and plenty of power for days of carefree listening. And I like the fact that it’s storm proof with an IP66 rating so you can take it anywhere with no worries. That said, this speaker isn’t for everyone but if you value great sounding music when off grid, it’s the biggest baddest Bluetooth streaming Bullfrog in the pond. And guaranteed to put a Bustle in your Hedgerow.

Full Disclosure: As noted in the article, Kicker provided this speaker for an independent review at no cost to myself or American Adventurist. This review and others like it are intended to provide you, our readers, with no holds barred updates on a variety of new gear as it becomes available.